With Rogers Q2 2008 results announced today, we read the report and found some good info on their commitment to Apple regarding the iPhone (it also says MB, not GB in the report):

We have entered into a contract with Apple Canada Inc. to sell the iPhone 3G handsets throughout Canada. Pursuant to the agreement, we have a commitment to purchase a specified number of handsets, resulting in a minimum commitment of $150 million. We have agreed to subsidize the retail price of these handsets during the term of the agreement.

On June 9, 2008, Wireless announced that it would launch the Apple iPhone 3G in Canada. The launch took place on July 11, 2008, under both of our Rogers Wireless and Fido brands. A wide variety of service plans are available for voice and data combined, with all price plans requiring three year term contracts.

The iPhone 3G handsets are currently priced at $199 and $299 for the 8MB and 16MB models, respectively, which reflects significant handset subsidies that Wireless incurs for each unit sold. Depending on, among other things, the volume of iPhones that Wireless sells, it is likely that Wireless’ cost of acquisition (“COA”) per subscriber in the second half of 2008 will increase from the first two quarters of 2008. However, as it is anticipated that iPhone subscribers will generally subscribe to both voice and data service plans, the ARPU per iPhone 3G subscriber is also expected to be higher than Wireless’ average postpaid ARPU that is generated from the majority of its other devices. As such, Wireless’ ARPU levels are expected to be positively impacted over the term of the iPhone 3G subscriber contracts. ”

Here is the report: 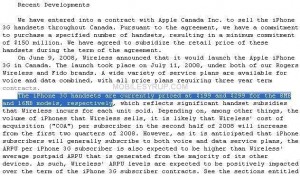