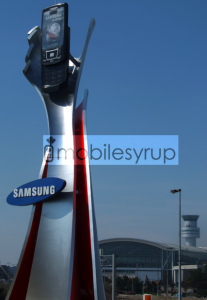 Toronto’s Pearson International Airport has become the 22nd international airport to have a massive 50 foot outdoor sculpture of a hand holding a Samsung cell phone. Some are saying this is “art” while it’s part of Samsung’s global and innovative “World In Your Hand” branding initiative.

The campaign began in France at Charles De Gaulle International Airport in 2002. with the sculptures created by award-winning designers Frederic Bruly Bouabre and Jan Lawrence. The Toronto sculpture was designed by Jan Lorenc.

Benjamin Lee, President, Samsung Canada said “These impressive sculptures symbolize Samsung’s role as an innovator in the wireless market and our goal to bring people together through communication. Specifically in the Canadian market, this sculpture represents Samsung’s strong brand presence and our excitement to be a Worldwide Olympic Partner for the upcoming Vancouver 2010 Winter Olympics.”