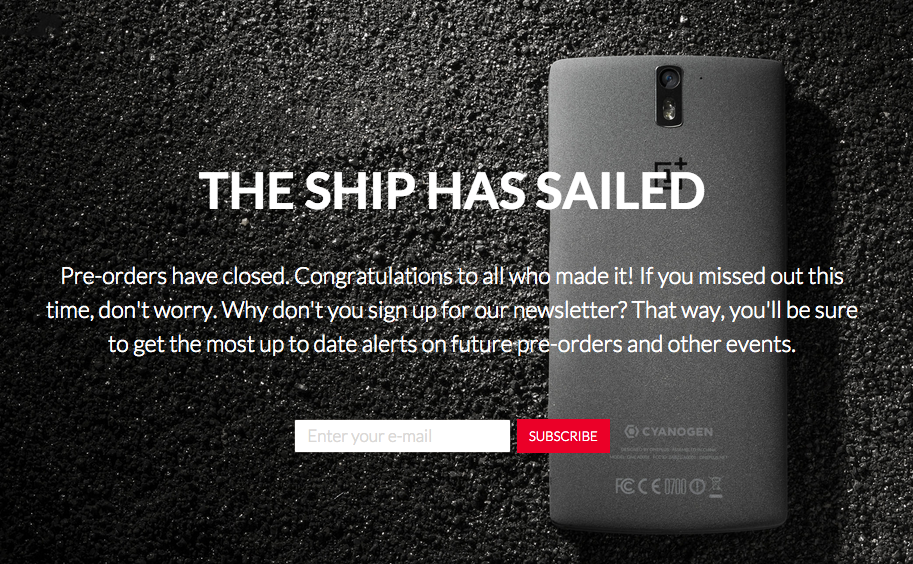 OnePlus finally loosened its tight hold on its One smartphone this week with an hour of pre-orders that quickly descended into chaos. The company’s site was so slammed, it ended up extending the pre-order period from one to three hours. Even still, people had issues accessing the site to place their order.

OnePlus is now hoping to make it up to those that didn’t get a chance to pre-order. Following what it calls an ‘unacceptable’ experience, the company has announced that folks will have a second chance to pre-order a OnePlus One on November 17th.

“Tens of thousands of Ones are now on the way to users who successfully placed their orders and we’re thrilled they’ll soon receive their brand new phones,” OnePlus said in a blog post today. “But we are also fully aware that the execution and experience for many of our fans was unacceptable. Despite a dedicated hardware platform set up for the event, our servers still had difficulty with the surge of traffic received when the pre-orders opened.”

The company says it doubled its server capacity to handle the anticipated surge in traffic once the pre-order site went live but that it wasn’t enough. On Monday, November 17th, it is planning a second attempt. OnePlus says it plans to get the additional servers up and running well in advance so they have more time to cope with increased trafffic. Pre-orders will go live at 3pm GMT, which is 10am ET.

Finally, and perhaps most importantly, Canadians that were successful in placing an order only to find their shipping address had been changed to one in the U.S. can rest easy. OnePlus says that this error is a result of the fact that they ship to Canada via the United States. Though you’re not able to change the country on your shipping address after you place your order, any orders placed with a Canadian address will ship to the address provided in Canada (not the U.S.). You don’t have to change anything. “Don’t worry — your data on record is correct,” says OnePlus.