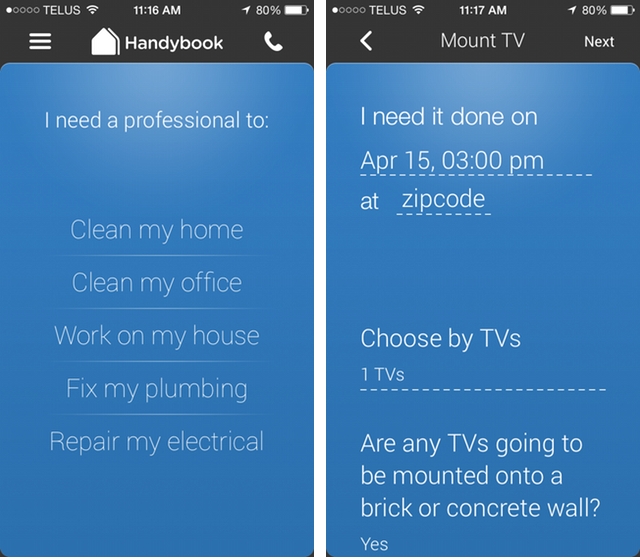 A new startup has hit Toronto, and it’s going to be a boon for consumers and professionals alike.

Handybook, a New York-based startup that has raised just over $12 million to date, runs an iOS-based cleaning service that allows customers to book home cleanings, electrical and plumbing appointments, and a number of other fix-it verticals, quickly and easily.

The company is expanding beyond the US today, making Toronto its first city in an expansion that will hopefully take it across the entire country.

With a sparse but usable interface, the Handybook app is interesting for a number of reasons. Unlike Kutoto, Handybook lets users book appoints for myriad operations, including mounting a TV or assembling Ikea furniture. Every expert in its database has been 100% backgrounded checked, and if a customer is not satisfied with the job Handybook will refund the entire amount, no questions asked. While it’s unlikely that policy can continue indefinitely as the company scales in size, it seems to be working for them: almost every review I’ve seen has been remarkably positive.

No word on when it is coming to Android, but we’re hoping soon. There’s also a web interface, too, for those looking to book on a larger screen.