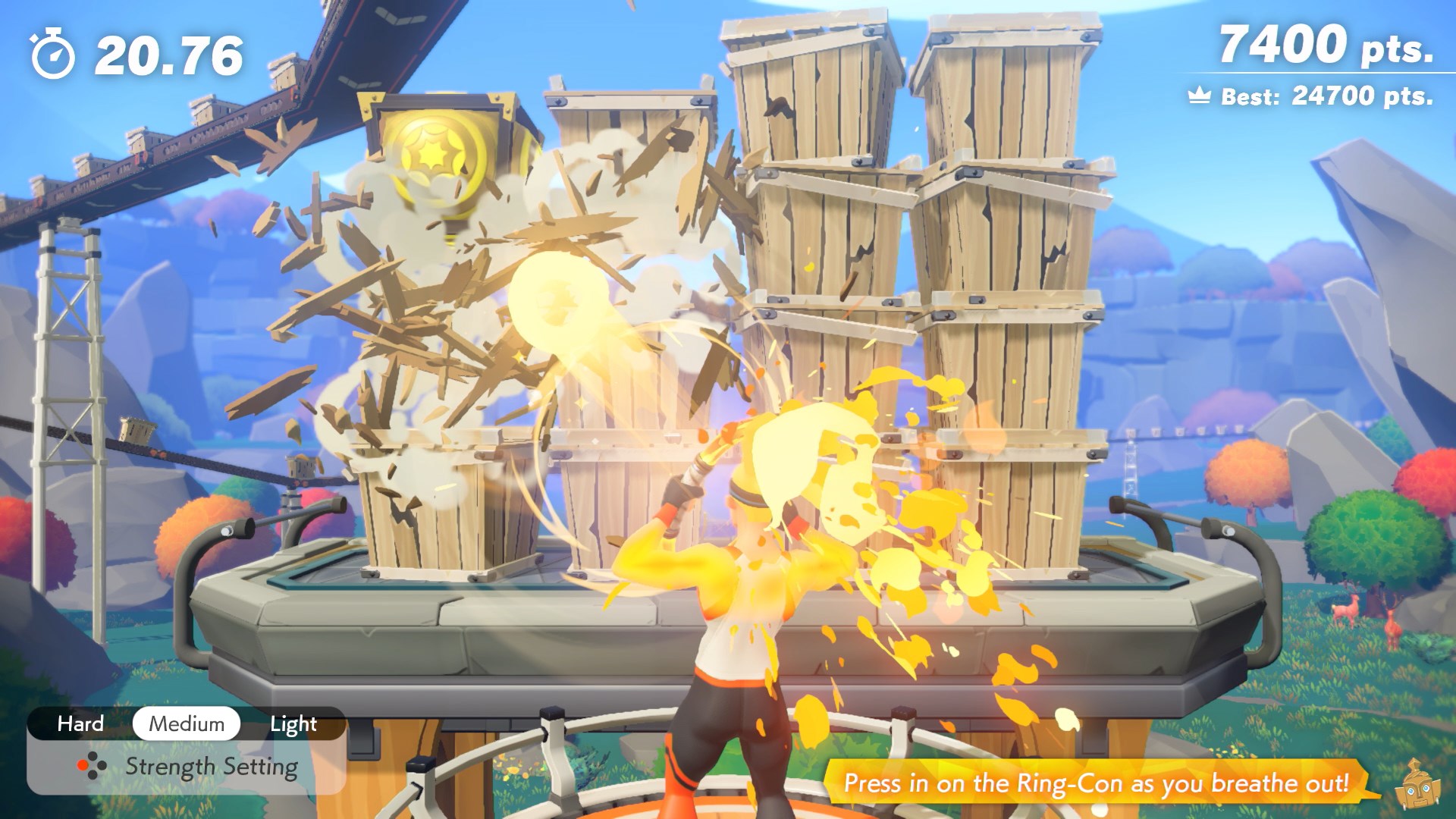 I purchased Nintendo’s first notable fitness effort like many Wii owners in the late 2000s, but didn’t stick with it because despite being a video game, I still felt like I was exercising. Ring Fit Adventure, on the other hand, is more game than bland exercise aid, though the overall experience is still exhausting — but that’s the point.

That said, similar to Wii Fit, Ring Fit Adventure still sits somewhere between a fitness workout and a video game.

The game’s somewhat wacky circular Ring-Con is the focal point of the experience. It features a sturdy resistance band with a Joy-Con slot that players bend in and out and move around to play different mini-games. The second half of Ring Fit Adventure is a leg strap you put around your left thigh that holds the other Joy-Con. This tracks how fast you’re running, as well as any leg exercises.

Both accessories are surprisingly well-built and easy to use. The strap is built from elastic and velcro, while the Ring-Con features foam grips on either side and feels nearly indestructible. These foam grips can also be removed to wash.

The game itself has players tackling various third-person, on-rails stages arranged in a classic Mario-like overworld, adding to the gamification of the overall ‘trick-you-into-exercising’ experience. 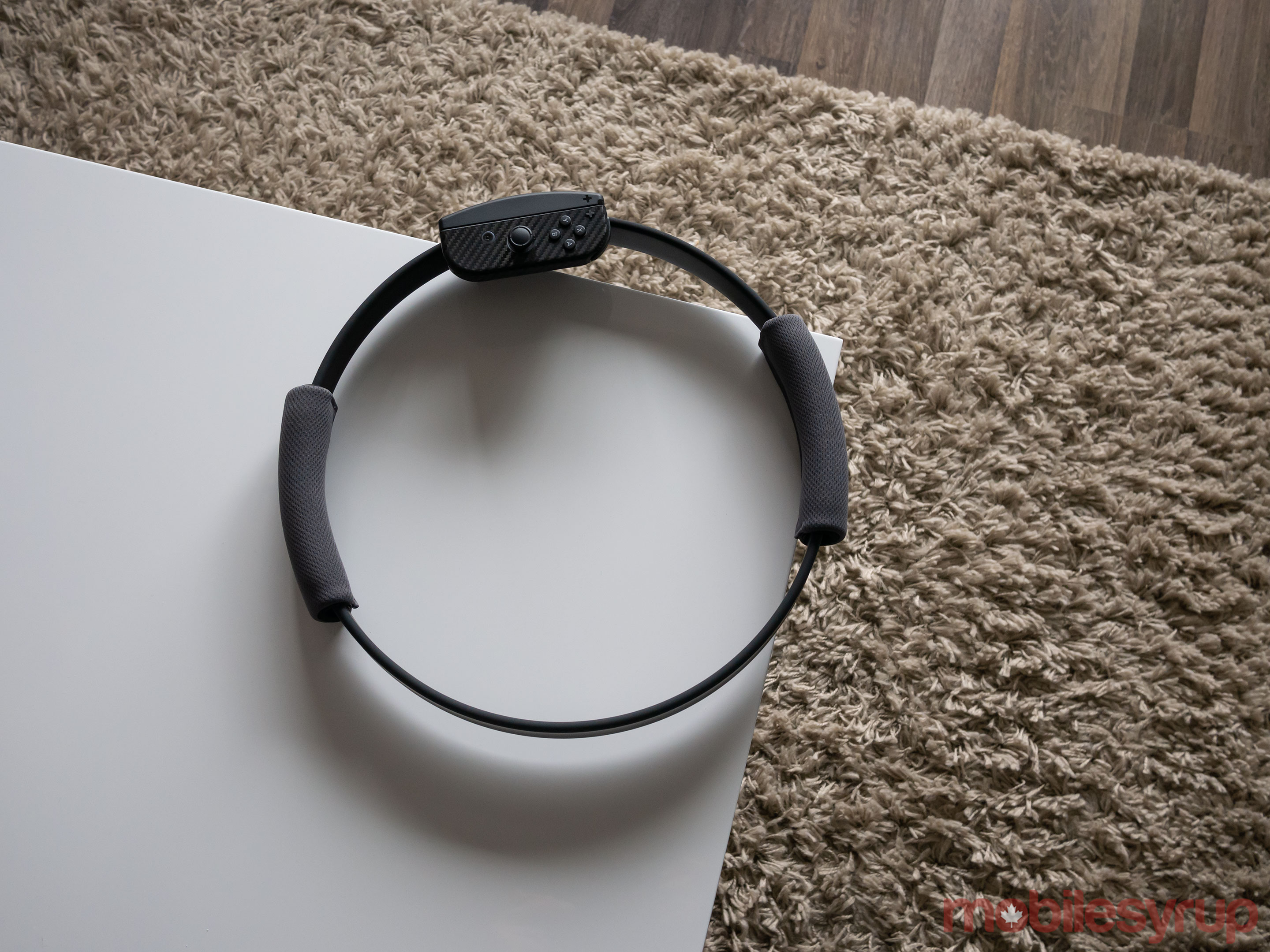 Jogging on the spot moves you forward. If you run, your on-screen character runs, just as you expect it would. Raising your knees higher while running also causes your in-game character to more easily bound up stairs or move through water.

Squeezing the Ring-Con shoots out an energy blast that attacks enemies and obstacles, while pulling it out creates a vacuum that sucks up coins and collectible items. Other actions include pointing down to jump in the air and levitate for a brief time, which I always found difficult to remember. Finally, aiming the Ring-Con in the real-world moves your in-game character’s Ring-Con around.

Things change up a little bit when you start facing enemies, which appear as you’re navigating through stages. Different exercises like leg extensions, crunches and yoga poses lower enemy HP. 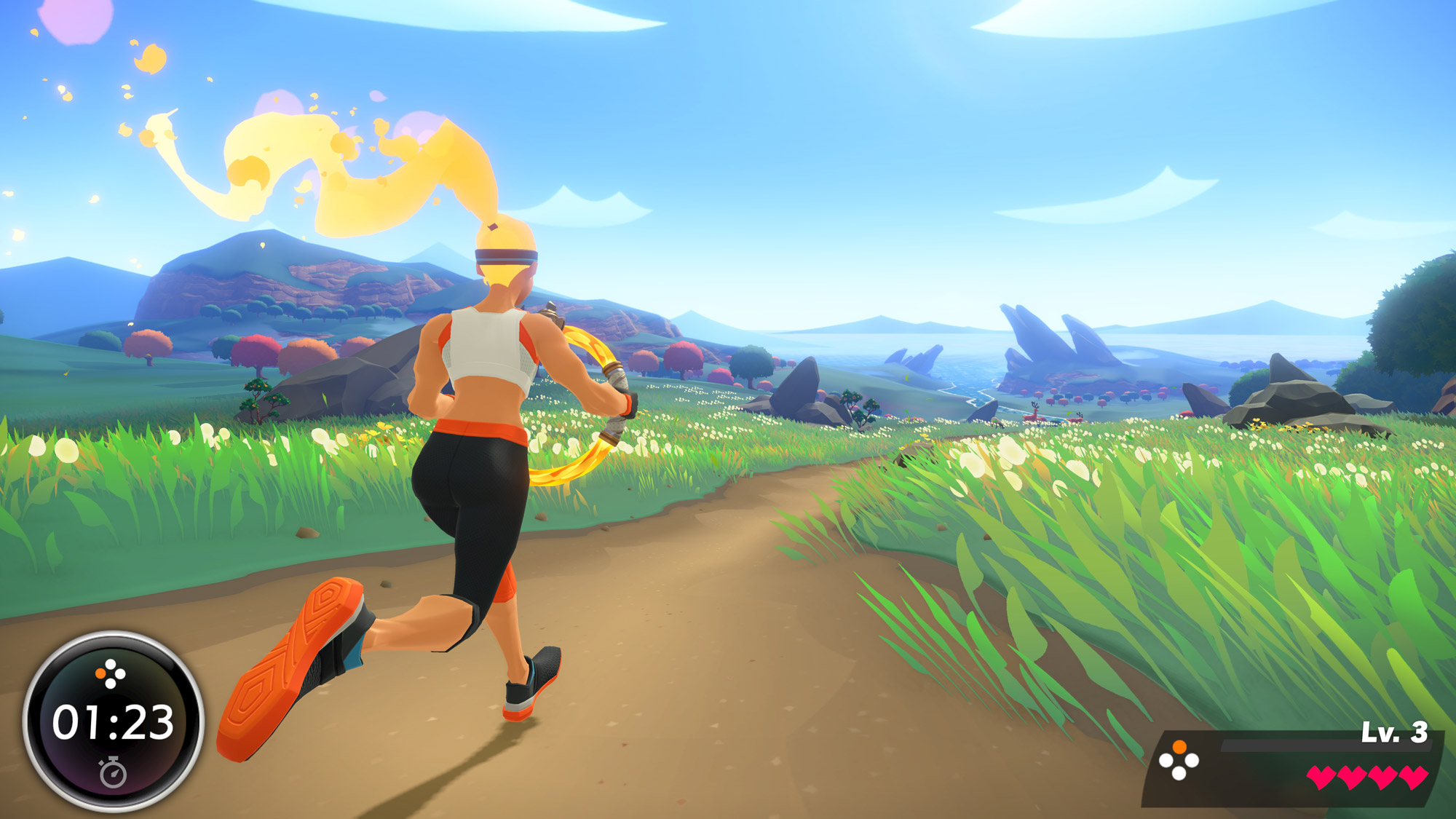 Each successful exercise deals out damage to your foe. In most cases, you’ll find yourself moving through at least three or four sets of activities before defeating an enemy.

You also earn XP as you move through stages and level-up, but increasing your level seems to have very little effect on how your character performs.

Beyond Ring Fit Adventure‘s somewhat silly main story involving a talking ring and a ripped dragon that loves pushups, there are also fun mini-games. One has you dodging bombs while walking on a tightrope, while another tasks players with a game of Whac-A-Mole by squeezing the Ring-Con in and out. They’re all fun, entertaining, and, most importantly, don’t feel like you’re actually working out. There’s also a less compelling mode that allows you to string together various exercises into a routine if you’re looking for a more traditional workout experience. 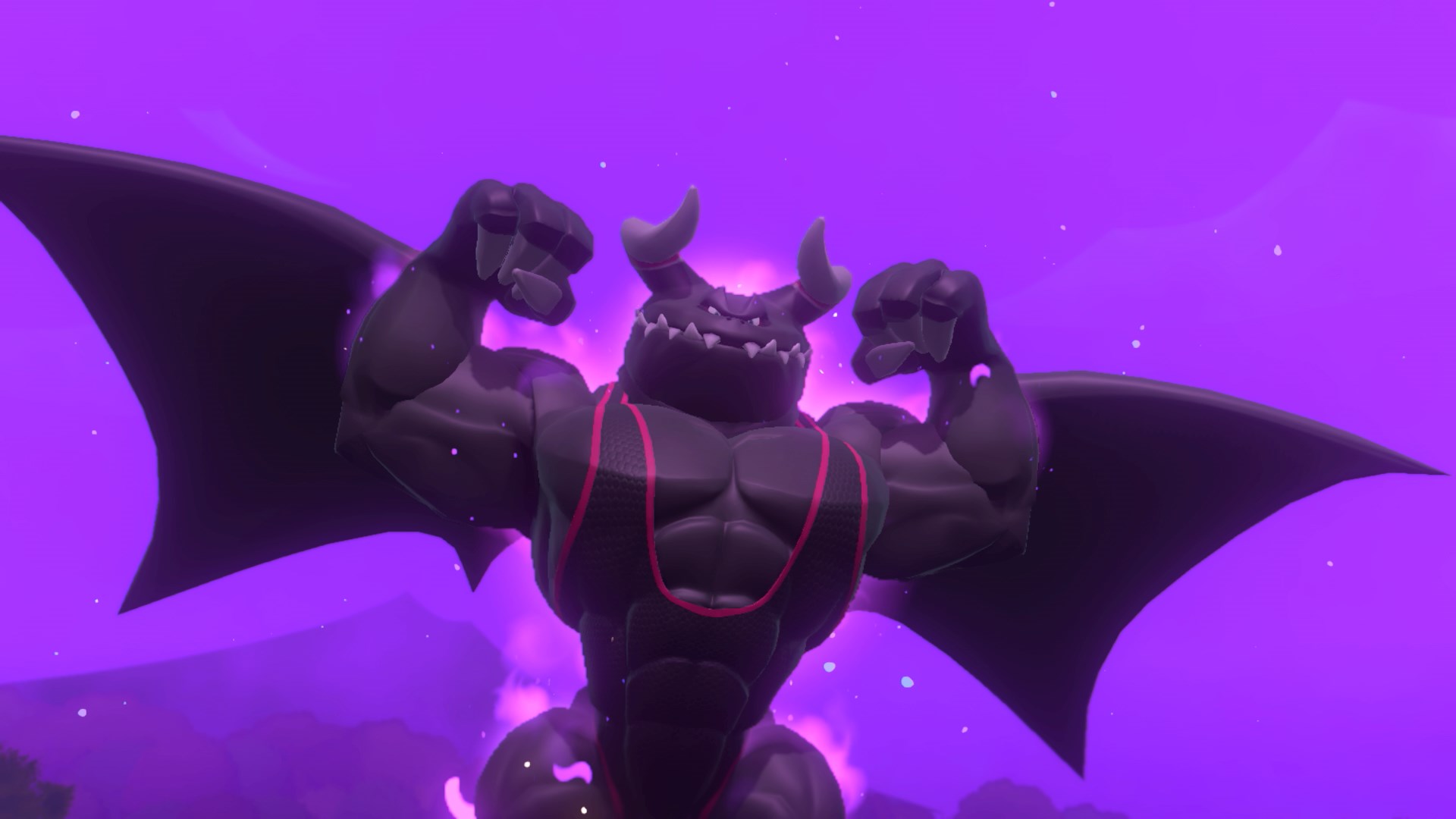 Multi-tasking mode is a feature I didn’t spend much time with. It allows players to use the Ring-Con while still performing other tasks; for example, sitting on the couch and watching TV. All of this exercise also counts towards your experience in the game when you boot it back up.

On a side note, Ring Fit Adventure has also arrived at an ideal time for me. A few months ago, I cut my middle finger, severing an artery, tendon and a nerve. I spent several weeks in various casts and braces, and because of this, my right arm, as well as my middle finger, are very weak. Needless to say, it wasn’t a great time for me.

Over the last few days, I’ve played Ring Fit Adventure in an effort to regain some level of strength in my right hand and arm. While it’s still too early to experience a substantial change, it already feels like I’m already regaining my strength a bit. 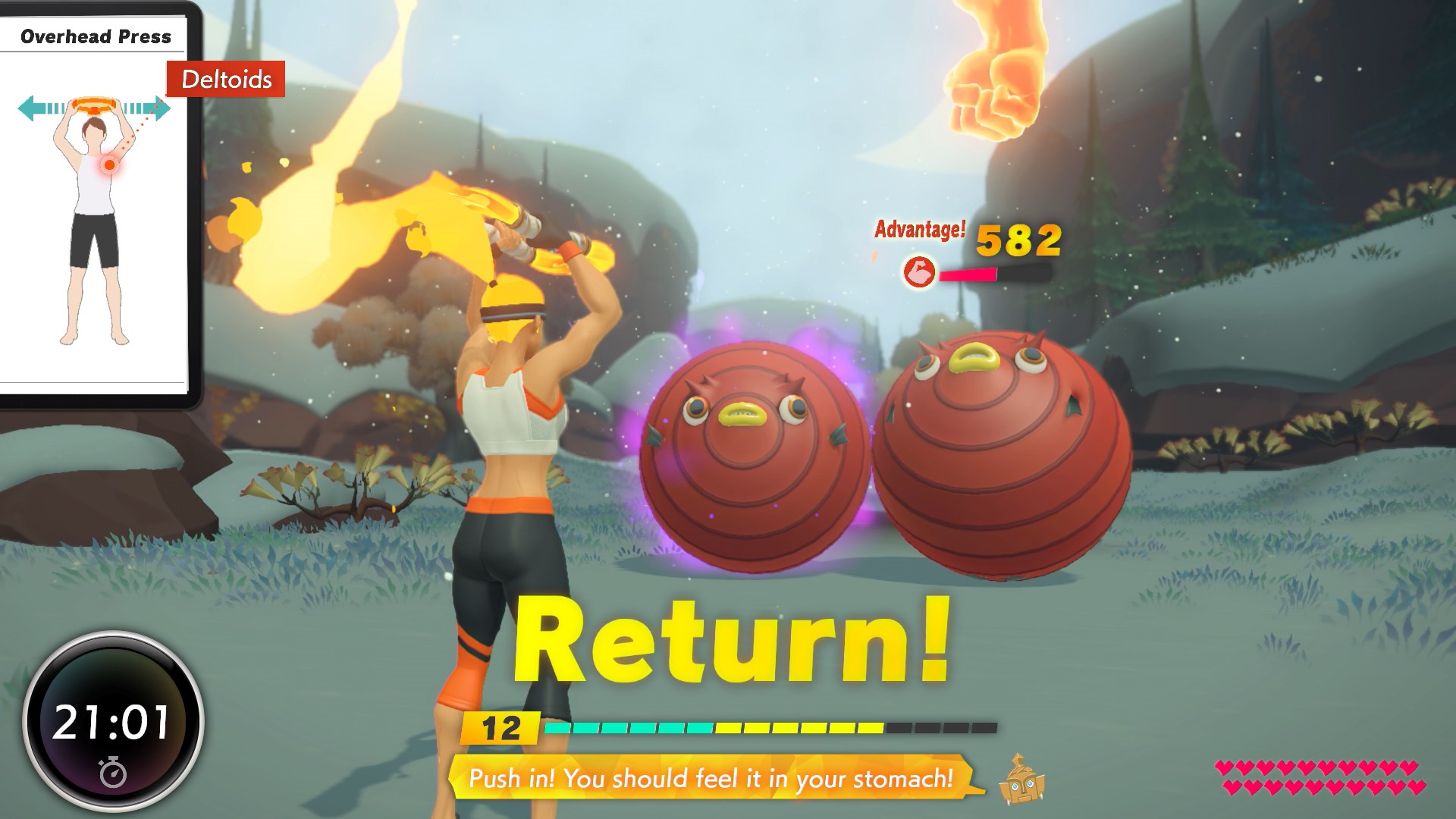 Ring Fit Adventure itself is a relatively basic gaming experience, but it does a decent job of convincing you that you aren’t actually working out, which is the entire point of an exercise-focused game.

It also feels like a more interesting, less bland take on Wii Fit. The game has managed to keep me compelled for several days now, which is an achievement in itself, given how reluctant I am to exercise consistently.

Now excuse me while I go run on the spot while flexing a circular controller in front of my TV again.

Ring Fit Adventure is set to release on October 18th for the Switch and Switch Lite.