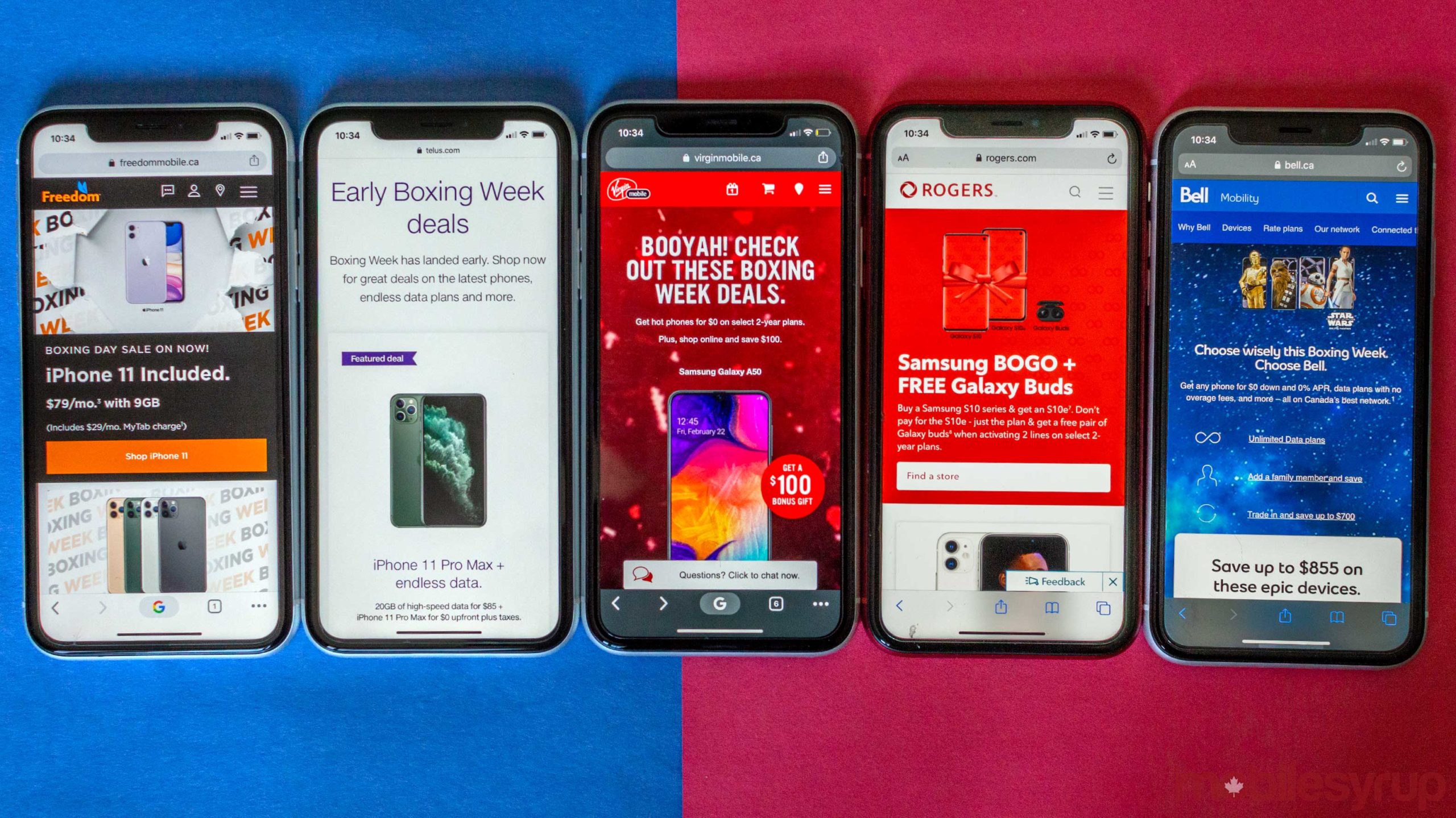 Since nearly every Canadian carrier has released its Boxing Week deals, it can be difficult to stay on top of them.

With that in mind, MobileSyrup has rounded up all of the major Boxing Week deals offered by Canadian carriers below. We will update the post as more carriers release their deals.

Rogers is offering a sweet BOGO deal where Customers who activate or upgrade to a Samsung S10, S10+ or Note 10+ on select two-year plans will get a Samsung S10e. They won’t have to pay for the S10e, just the additional line plan. Rogers is also throwing in a pair of Galaxy Buds with this deal.

You can learn more about Rogers’ other boxing week deals here.

Boxing Week at Bell means almost every phone is available for $0 upfront on 24-month financing plans. Customers pay an equal monthly payment, and that’s where the savings are, as some devices have reduced payments compared to the normal cost.

This includes the iPhone 11 for $0 down with $28.33 monthly payment with the device return option.

As for plans, Bell is offering the same suite as before: $75 10GB, $85 20GB and $125 50GB Unlimited options. These plans give you the specified amount of data at max speed followed by unlimited usage throttled at up to 512Kbps.

It’s also giving customers a free Native Union Wireless charger when they buy select compatible phones, which includes a number of iPhone, Samsung, Google Pixel and LG phones. You can also get bonus FreeBuds Lite when you buy a Huawei P30 Pro. Additionally, Telus is offering the iPhone XR and 10GB of high-speed data for $95 per month.

Shaw-owned regional carrier Freedom Mobile just delivered a bit 5GB bonus gift to all its plans and if you’re looking to get a bunch of data for not a lot of money, now may be the time.

You can get more information about Freedom’s boxing week deals here.

Fido is also continuing its holiday deal that offers double the data on select plans starting at $45 per month, including the 2GB, 3GB and 4GB data, talk and text plans.

You can learn more about Fido’s Boxing Week deals here.

Bell flanker brand Virgin Mobile has launched its Boxing Week sale that discounts popular phones like the iPhone XR and the Pixel 3a XL.

Beyond just phone deals, users will be able to save $100 on all new two-year plans when you order a device online. This means that the carrier waiving the $40 signup fee and giving you a $60 bill credit.

More information about these deals can be found here.

Koodo is currently running a Winter Sale on smartphones and plans. Koodo is offering a pair of Huawei FreeBuds Lite with a Huawei P30 or P30 Pro on the Tab — it’s an online-only deal. Further, Koodo is offering some double-data promotions, as well as $60 off JBL Tune 120TWA truly wireless earbuds in Koodo stores.

You can find more about Koodo’s deals here.

Eastlink’s deals involve savings offered through its EasyTab program, which lets customers pay off the cost of their device over 24 months. EasyTab lets customers pick any plan or switch plans “with no penalties or cancellation costs.” This includes the iPhone 11 for $0 down with $30 24-month EasyTab, which saves you $240.

You can learn more about Eastlink’s Boxing Week deals here.

The carrier is also giving customers who get a Samsung S10, S10e, S10+, Note10+ on any contract type a pair of free Samsung Galaxy Buds. The carrier has noted that this offer is only available in-store.

You can get more information about SaskTel’s boxing week deals here.