Cadillac hopes to define its next generation with the Lyriq 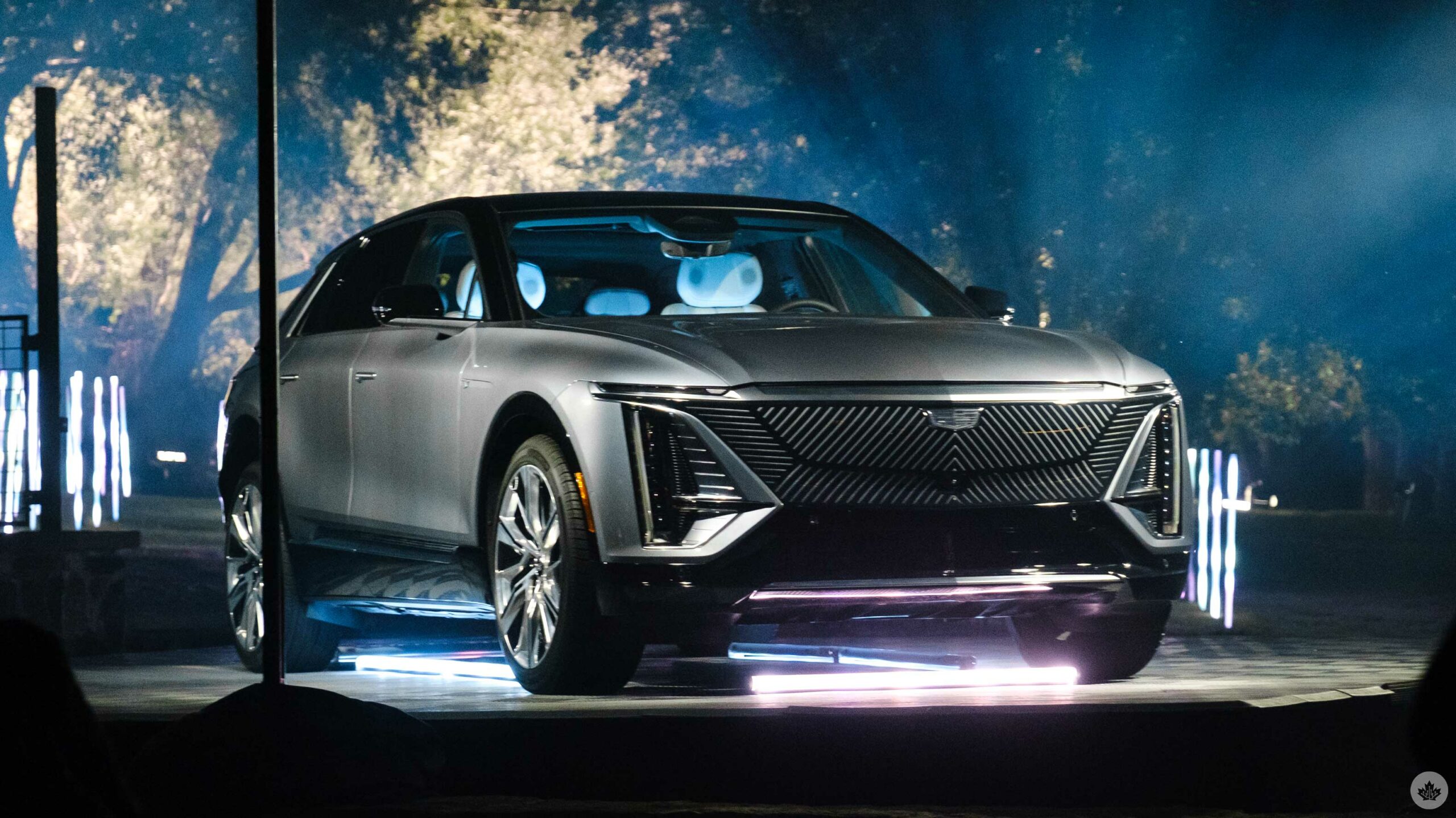 The two days I spent testing out the Cadillac Lyriq in Park City, Utah left me with one clear feeling — Cadillac wants to compete.

Globally, the push to electrification officially began over the last few years, and while GM may have had a few modern electric models in its lineup since the Chevy Volt, the world’s been waiting for a car running on the anticipated ‘Ultium Battery Platform.’ The automaker detailed its new batteries at the start of 2020, and now with the Hummer and the Lyriq on the horizon, those batteries are finally being put to the test.

The Lyriq is set to start shipping in limited quantities in Canada in Q3 2022, but most of the pre-orders will likely arrive in 2023, with the $69,898 CAD Cadillac EV finally beginning to hit larger-scale production in 2024.

A fresh design to usher in an era of electrification 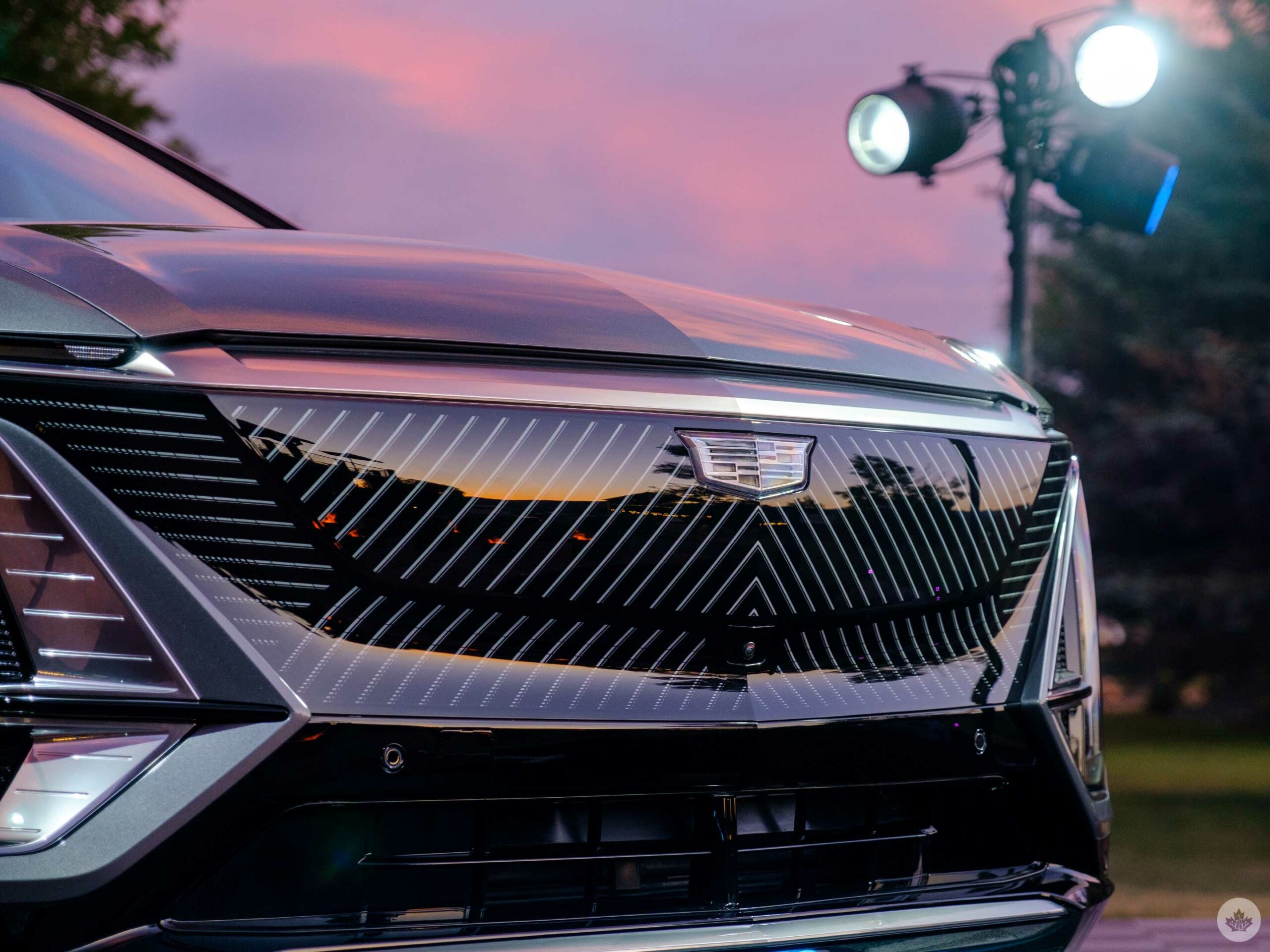 For me, the highlight of the Lyriq is the attention to detail. GM gave the design teams lots of freedom to create a flagship car with this new EV, and it shows. During my time in Park City, I talked to Tristan Murphy, the lead interior designer of the car, and his excitement for what they brought to life in the Lyriq was infectious.

He spoke of using metal and wood accents inside, which helps the new Cadillac feel both subtle, natural and luxurious all at once. It’s a tricky mix to pull off, but the Lyriq comes close. The interior door panels, for instance, are gorgeous thanks to the LED lighting, dark ash wood accents and metal speaker grill. Even the door handle is unique and grew on me very quickly since the pull-up motion made me feel like I was ejecting from a jet or using some form of high-end machine. 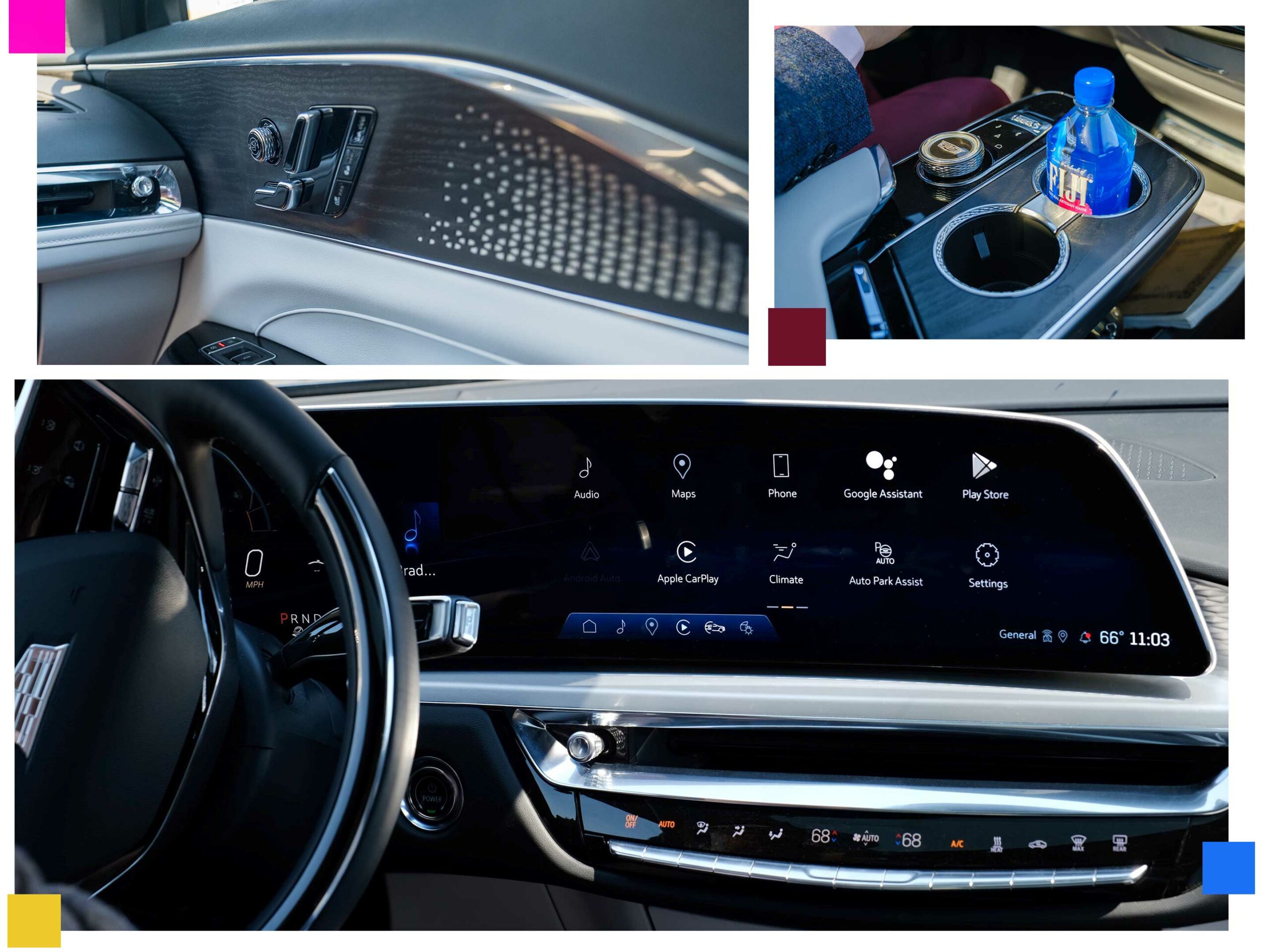 The infotainment also looks great and runs on the same Android Automotive backbone supporting the Polestar 2. This means that GM’s nav system is gone, and Google Maps is the default mapping service in the car — a huge win in my books. Beyond that, Android Automotive allows Google Assistant or Alexa in the car and access to a handful of Android apps through the Play Store. So far, it’s mostly media apps like Spotify, but the potential it brings is exciting.

The clean navy blue and white style I tested will likely be replaced with something a little more Cadillac-inspired for launch, but I hope it doesn’t change much. The simple navy blue and white icons are clean and feature a nice contrast for the road. The automaker could do a little better at making its icons a little bolder to match some of the default Google Apps already on there, but this is a step in the right direction for GM’s infotainment design and functionality.

That being said, since it’s going to change for launch, I won’t go into the design too much. I will say that the system worked well, and using it on the huge 9k display in the front of the Lyriq was a treat. 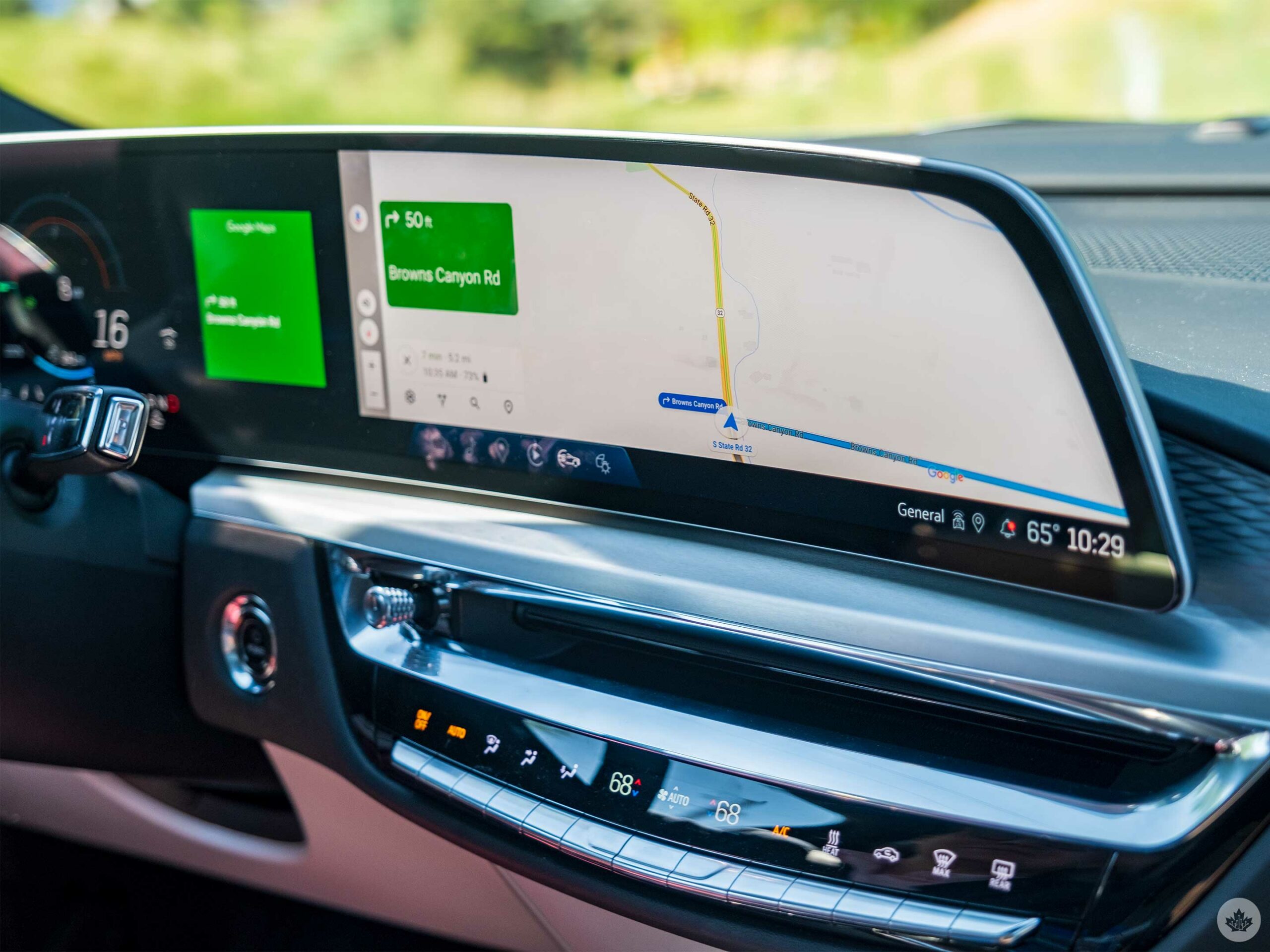 The display features no seams, curves slightly, and both the left and right edges are custom designed to slant slightly. It doesn’t sound like much, but in a world of square displays, it’s a breath of fresh air. The fact that GM went out of its way to create an entirely custom display for the Lyriq instead of using an off-the-shelf rectangular screen that would have been easy to source, shows how committed the company is to pushing design in the new EV.

There are still some plastic elements that are painted silver to emulate metal which seems like an odd choice in a car where many of the other elements are pushing the bar forward with high-end materials. It’s not to say that the infotainment area feels lacklustre, but compared to the mix of materials on the doors, it feels a little out of place, especially since it’s front and centre.

In the front area, there are three USB-C ports and a traditional 12-volt outlet. In the back, there are two more USB-C jacks and a standard 120-volt outlet which I always love to see in modern EVs. 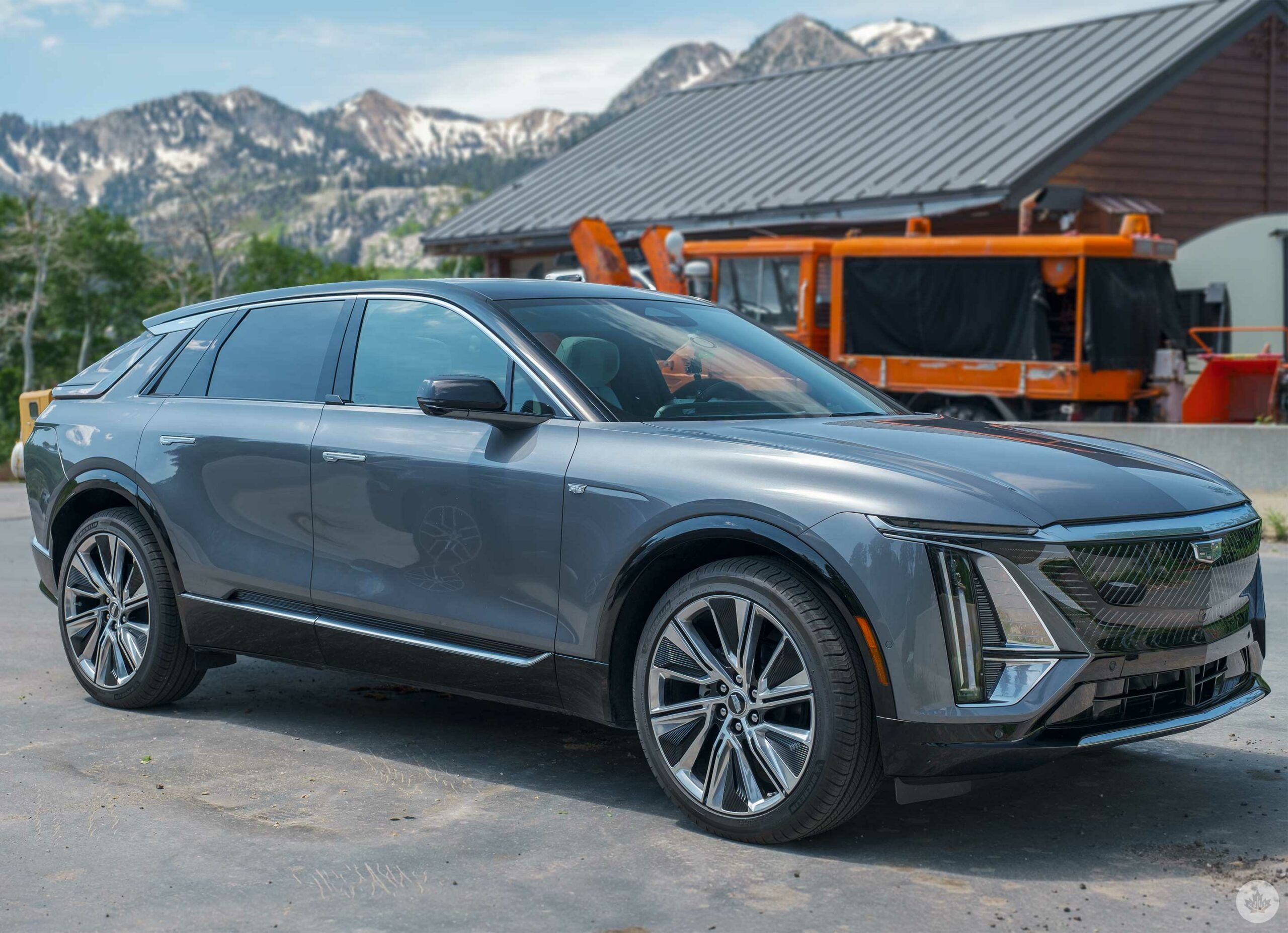 On the centre console, there’s a control knob, some buttons and two cup holders. The left side is dark piano black plastic, and the right is wood. To be honest, I barely used these controls and instead opted for the touch screen. However, Cadillac says that its customer base is still split on knob vs touch, therefore, it’s offering the choice in the Lyriq. In photos, this area looks nice, but the plastic does collect a lot of fingerprints.

On the outside, the crossover looks stunning. I really like the proportions and the long wheelbase. Plus, the somewhat angular front and slicked back rear reminds me of a more grown-up version of the Polestar 2, which is a really compelling vibe. 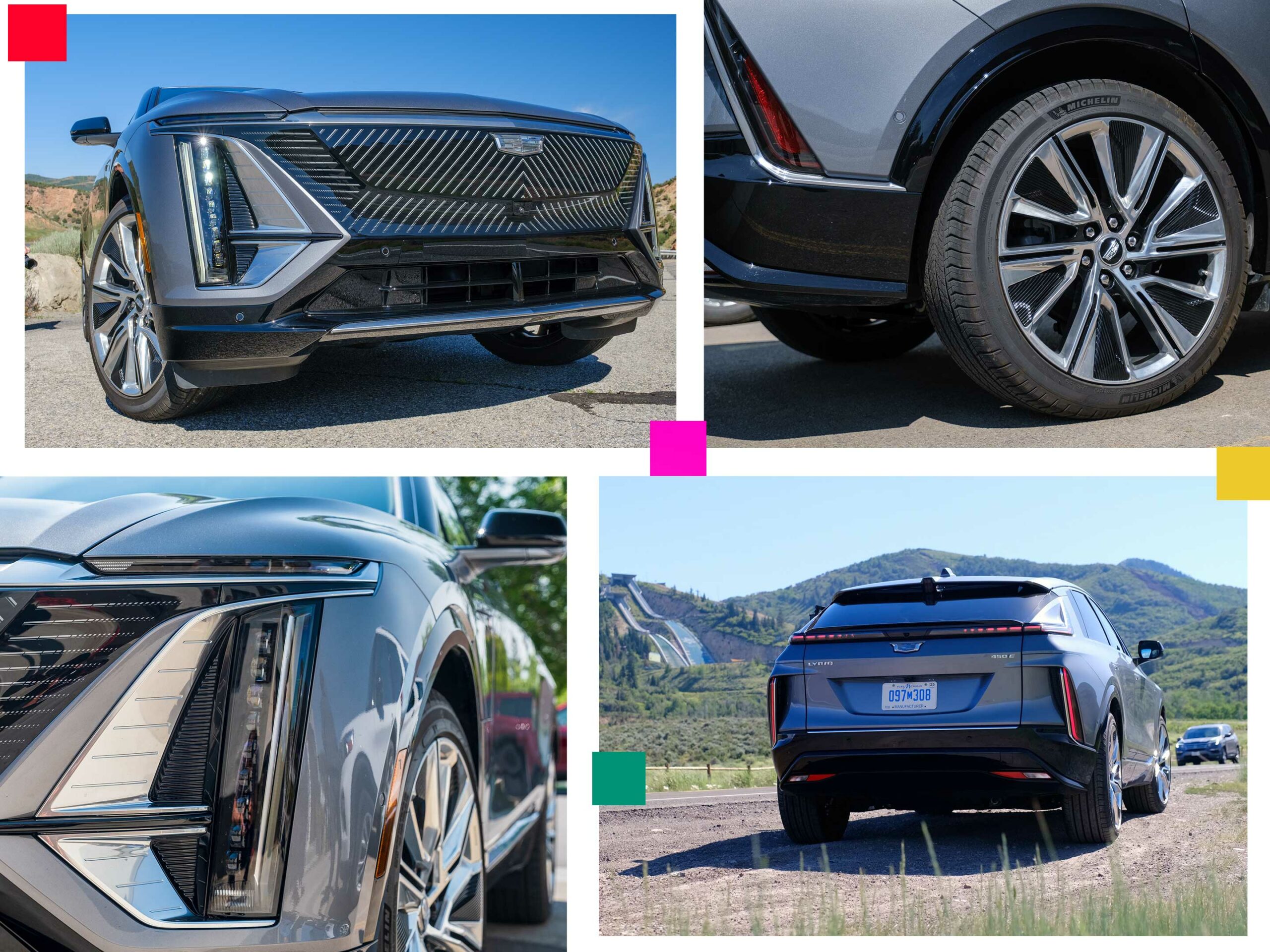 The new front grill/light array looks fantastic. With a unique light pattern that’s bound to make the Lyriq instantly recognizable in low light. During the daytime, it’s a little more inconspicuous, but the long vertical LED headlights help set it apart from other crossovers. I also really enjoy the sculpting on the hood and the side panels. They’re both subtle, but they do a lot to help the car look sleek and official all at once.

The tail lights are equally as cool and extend down from the side of the car to frame the trunk and then gave off an effect of gradually dispersing as it moves towards the centre of the car. I respect Cadillac for not falling into the light bar trend on the Lyriq, and I like the fun lighting here. 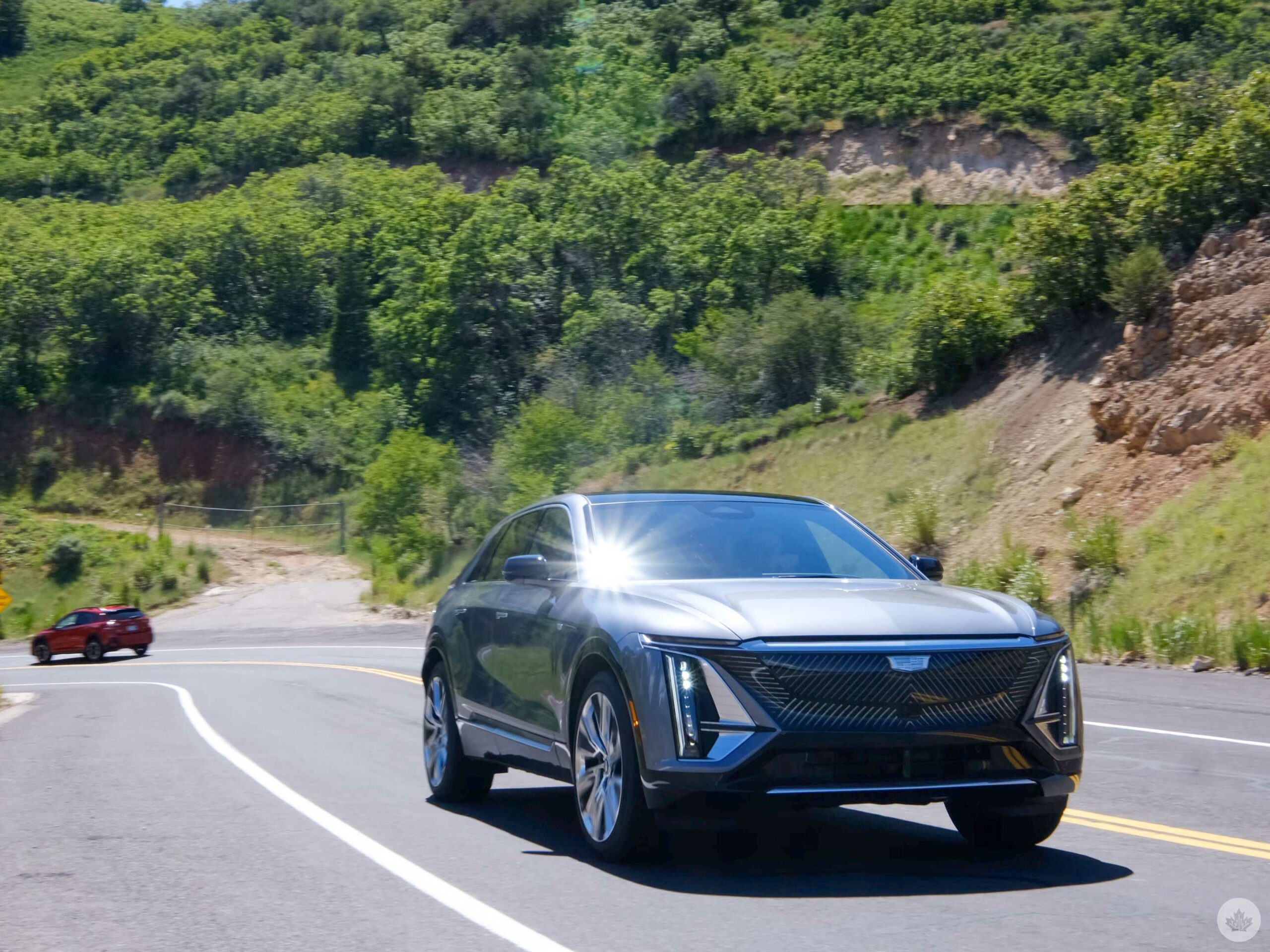 Sitting behind the wheel of the Lyriq is like many high-end EVs, which is to say strangely relaxing. The Cadillac team has done an outstanding job blocking the cabin interior from noise and even went as far as to install noise-cancelling microphones in the ceiling of the crossover.

The acceleration is smooth in both the Standard and Sport modes. The Lyriq offers 340 horsepower, which is enough to make it quick off the line, but it’s not sending butterflies to my stomach the way several other EVs do. This isn’t a bad thing since most drivers don’t need that, but it’s still something to be aware of.

The drive is also smooth, with the solid core of the Ultium battery providing a decently low centre of gravity. It gives me more confidence around bends than you’d expect of a vehicle of the Lyriq’s size. Overall, I felt the Lyriq’s driving style is refined and comfortable above all else. It’s not as fast as some other EVs, the all-wheel-drive version should help with this in the future.

At the end of the day, it’s smooth, more comfortable and still offers a fairly engaging driving experience if you want to engage with it. If not, you can use lane assist features of Cadillac Super Cruise to help take off some of the strain of driving long distances.

To help push this forward, Cadillac even installed a new Regen paddle behind the wheel. It kind of looks like a paddle shifter, but it feels a little more like a button to press. The cool thing about it is that it’s pressure-sensitive, so how aggressively you squeeze it determines how quickly you stop. If that sounds like a regular break to you, you’re on the right track, but this button slows the motor instead of using the traditional car breaks, providing drivers with more regenerative braking potential. 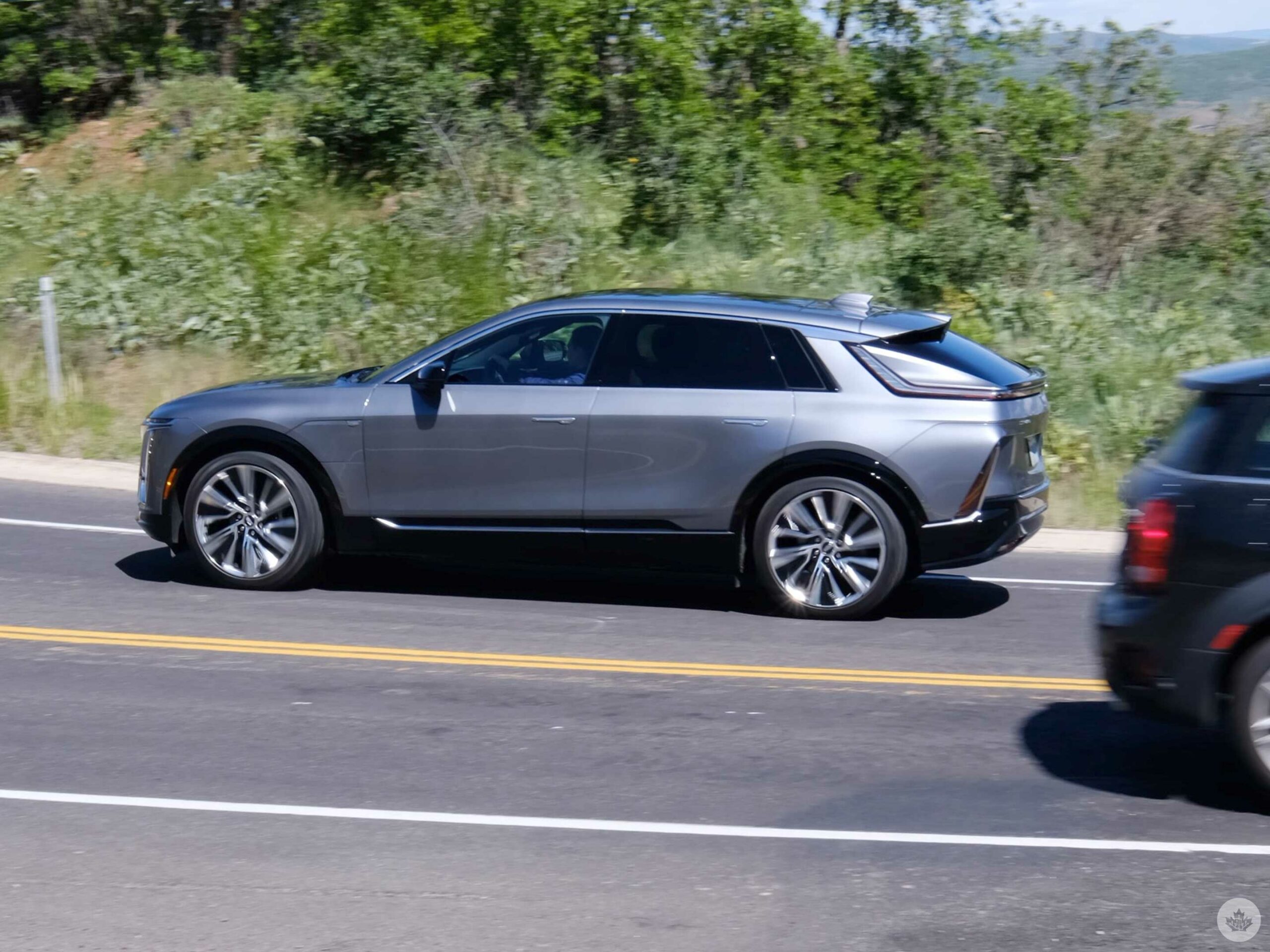 During the press drives of the Lyriq, we were able to test the adaptive cruise control and the lane assistance features (both worked well as expected), but Super Crusie isn’t available in the car yet. Cadillac says that it will be ready for launch later this year.

The rear-wheel-drive model that I tested is rated to have a maxim range of 502km.

Get excited about Cadillac again 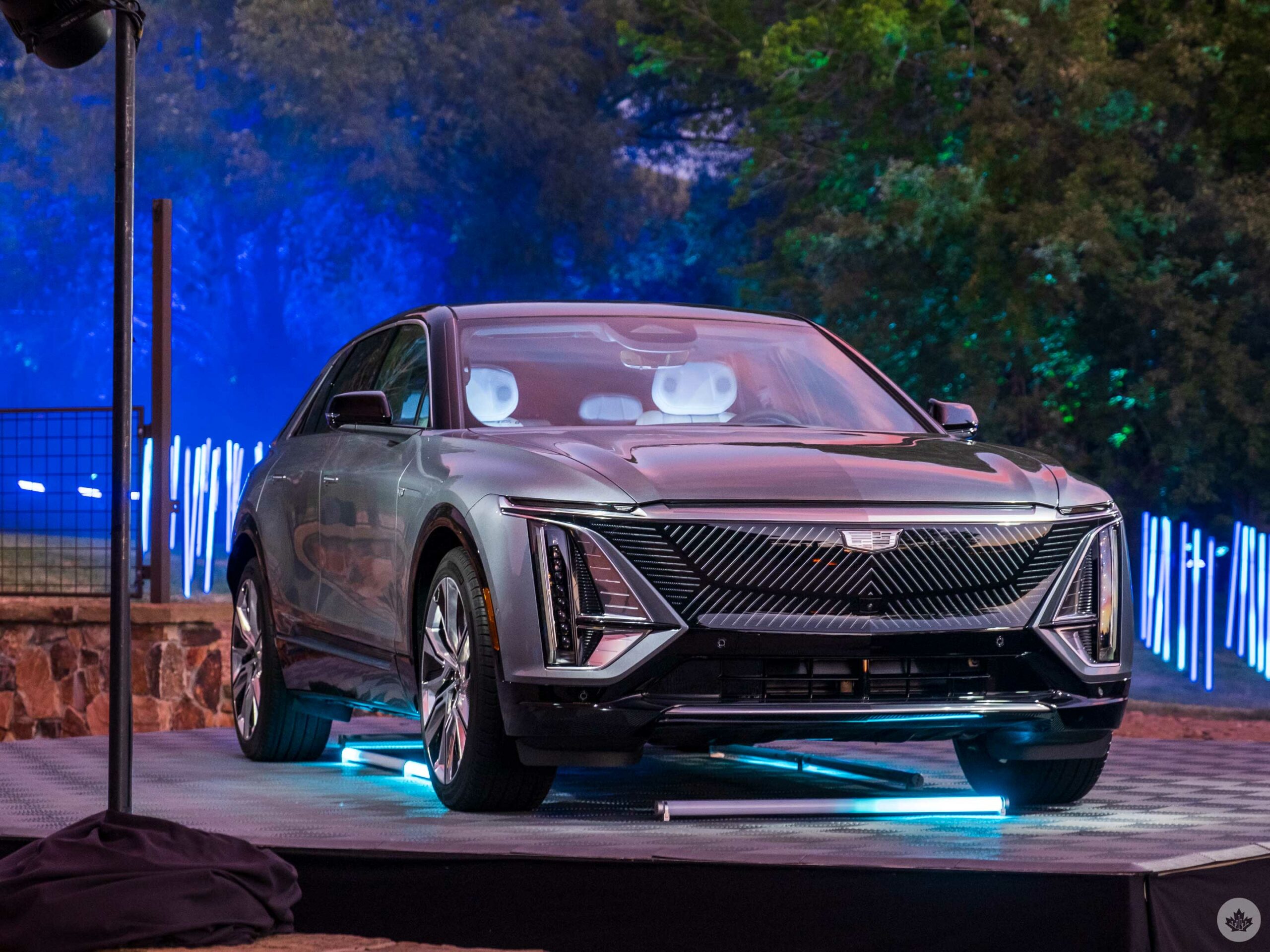 My favourite part of the EV revolution is watching the legacy automakers each attempt to break into the market and usurp the Model Y. The fierce competition in the space is incredibly fun to watch, and Cadillac hasn’t disappointed with the Lyriq.

I’m very excited to see the automaker adopt Android-based infotainment and to see how the Ultium battery holds up once the car starts shipping to customers closer to the end of 2022. (There likely won’t be many until 2023 though). That said, I had a lot of fun with it during my time behind the wheel.

The Lyriq is going to make a lot of people happy since it’s not only a solid car for fans of GM’s brand, but it’s an impressive Cadillac EV that will likely spark conversations on the street, and maybe even a few braggadocious comments from future owners. It’s definitely a car to be proud of, which is what Cadillac seems to be going for, but what remains to be seen is if this car can convert existing EV owners, into General Motors customers.

The Lyriq is more or less sold out until 2024, but you might be able to get your hands on one via a dealer if you’re lucky. GM also says that soon all Cadillac dealers will have a Lyriq in their showrooms to take people for test drives. The car’s MSRP starts at $69,898.