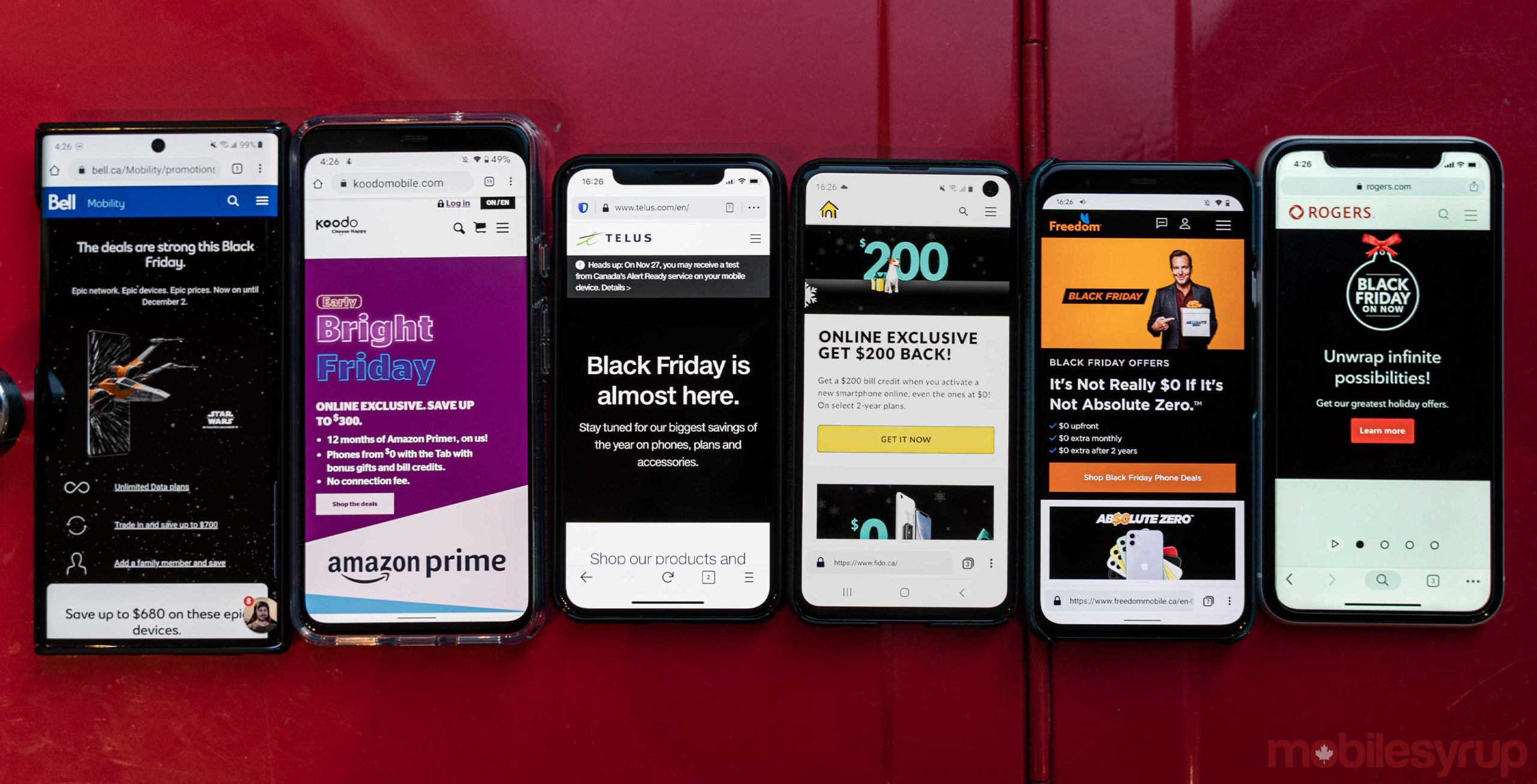 Given the fact that nearly every Canadian carrier has released its Black Friday deals, it can be difficult to stay on top of them.

With that in mind, MobileSyrup has rounded up all of the major Black Friday deals revealed by Canadian carriers below. We will update the post as more carriers release their deals.

This year, Black Friday takes place on November 29th, with deals carrying over to the weekend.

Montreal-based national carrier Bell has unveiled its Black Friday deals on its website with plenty of exceptional offers on the latest smartphones.

It’s also presenting customers with a family deal of 40GB of shareable data for $67.50 per person (with a family of four) when you bring your own devices (BYOD).

Toronto-based national carrier Rogers is providing customers with a variety of deals for Black Friday this year.

Customers can get up to a $100 credit when activating or upgrading any smartphone on a two-year plan.

Rogers is also offering a ‘Door Crasher’ deal that gives a free iPad and Sonos One with iPhone 11 purchase.

Select Android devices like the Pixel 4 XL are $0 on select two-year Rogers Infinite plans. Additionally, you can get $0 down on a Samsung Tab A 8.0 or a Huawei MediaPad T5 when you add a 2-year tablet plan for $15 per month to a Rogers Infinite plan.

More details about the deals can be found here.

Fido has revealed its Black Friday deals and has discounted select phones and doubled the data for some of its plans.

Customers can get a $200 bill credit when they activate a new smartphone online on select two-year plans.

The carrier has also doubled the data on its 1GB, 2GB, 3GB and 4GB data, talk and text plans when you bring your own phone or with a new activation or phone upgrade on a two-year term.

Shaw-owned regional carrier Freedom Mobile has unveiled its Black Friday deals with a big emphasis on its ‘Absolute Zero’ offers.

Freedom says its Absolute Zero deal as actually $0, unlike “the other guys” who charge you $0 upfront but make you pay for the device over time.

The carrier also has other deals on smartphones that don’t fall under the Absolute Zero monicker.

You can get more details about the deals here.

Regina-based SaskTel has released its Black Friday deals, including a $200 signup bonus for new wireless customers and a $90 phone plan with unlimited data.

Most of SaskTel’s home internet plans are discounted for Black Friday, but you need to make sure you select a two-year plan. Users can also get their first month free.

The carrier is also proving customers with a number of deals on select phone accessories.

More information about SaskTel’s deals can be found here.

Halifax-based regional carrier Eastlink has revealed its Black Friday deals, and is offering a 5GB data plan for $50 CAD/month.

The carrier is also giving customers a buy one, get one free deal where if customers buy the LG G8X ThinQ Dual Screen, they’ll get a LG Q70 for free.

Telus-owned Public Mobile has revealed a new Black Friday deal offering a one-time bonus 5GB of data for new activations on plans that are $35 and higher.

The carrier says this offer is only available to new customers and is not stackable with any other promos, excluding a refer-a-friend bonus.

There is also a Refer-a-Friend bonus of $20. New customers are eligible for this offer and can use the referral code to activate online or in-store.

More information about Public Mobile’s deals can be found here.

Montréal-based regional carrier Vidéotron has released its Black Friday deals and is giving discounts on a number of smartphones.

It is offering a several Huawei, Samsung, LG, Google, Motorola and Apple phones for $0 down either with a Zen plan or Base plans ranging from $60 to $100.

The carrier is also giving customers a $200 Visa card with a number of its smartphone deals.

Telus has revealed its Black Friday deals. The carrier is offering a variety of discounts, including getting a free pair of Samsung Galaxy Buds when you activate or renew a Galaxy Note 10+ (until December 1st or while supplies last), $10 off Peace of Mind Connect Plus plans and saving $100 when you shop online.

All of Telus’ Black Friday offers can be found here.

The Vancouver-based Telus sub-brand is calling its Black Friday promotions ‘Bright Friday.’ The carrier has released its ‘Early Bright Friday’ deals so it’s possible it could be adding more soon but that’s unclear.

Koodo is offering a number of phones including the iPhone XR, LG G8X ThinQ Dual-Screen, Samsung Galaxy Note 10+, Google Pixel 4 XL for $0 down on select two-year small, medium, large and extra large plans. Some of the phones come with a Visa gift card or bill credit.

More information about Koodo’s deals can be found here.

The carrier is offering a number of smartphones including the iPhone XR, Google Pixel 4, Samsung Galaxy S10e and the Huawei P30 for $0 down on select two-year platinum, silver and gold plans.

Along with the discount on phones, customers can also take advantage of double data offerings on Virgin Mobile’s 1GB, 2GB, 3GB and 4GB plans.

You can read more about Virgin Mobile’s deals here.

For more Black Friday and Cyber Monday deals, check out our round-up of retailer offers at this link.