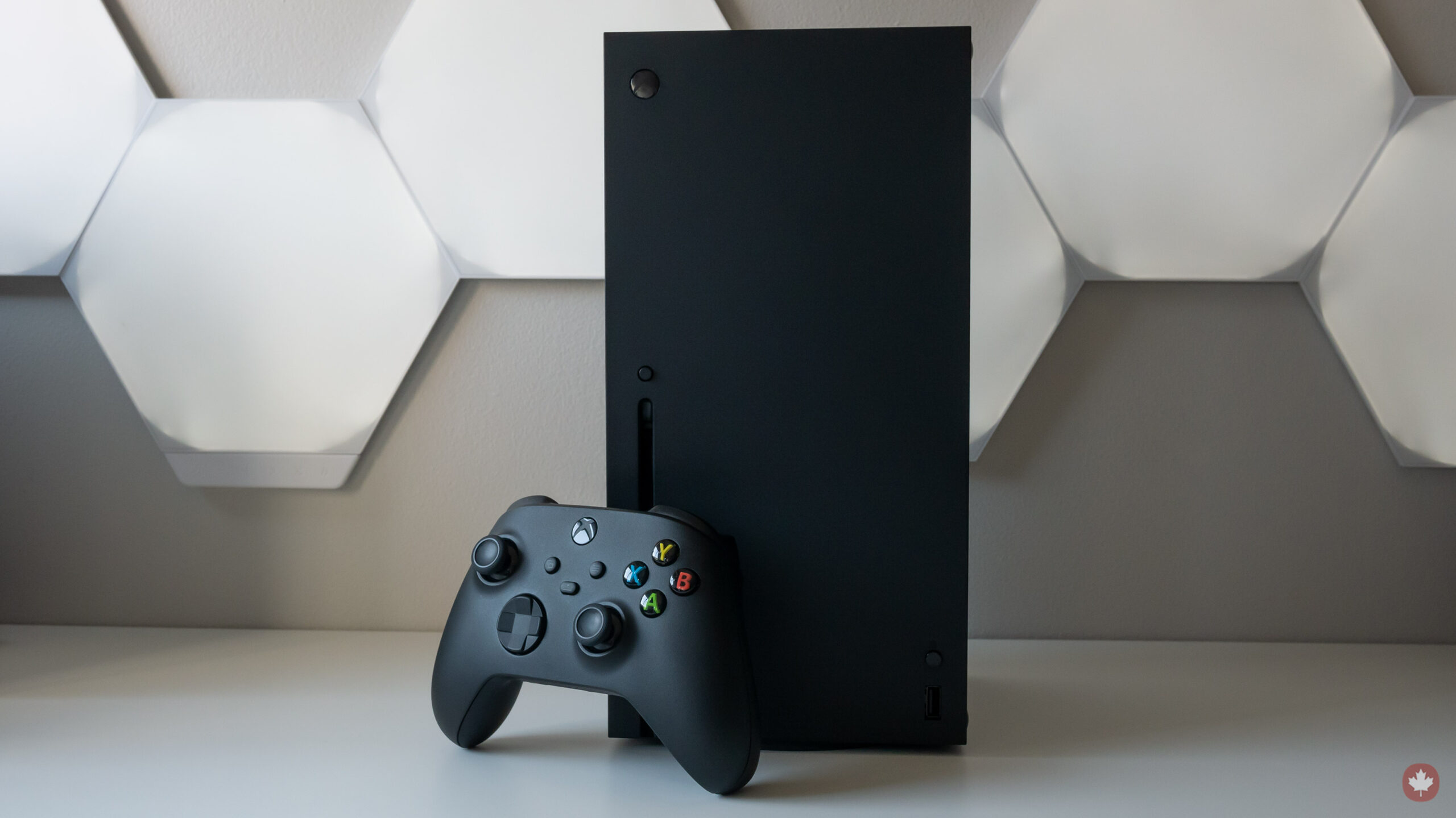 I generally like the look of the Xbox Series X. It carries a lot of the design language forward that Microsoft established with the Xbox One S and Xbox One X.

But make no mistake, the console is indeed a very big boi. In fact, some people might not be able to fit the Xbox Series X in their current TV stand.

The console measures in at 15.1cm (5.9-inches) wide and 30.1cm (11.8-inches) tall. This means that even on its side, there’s a possibility some people might find it challenging to place the system in their home. 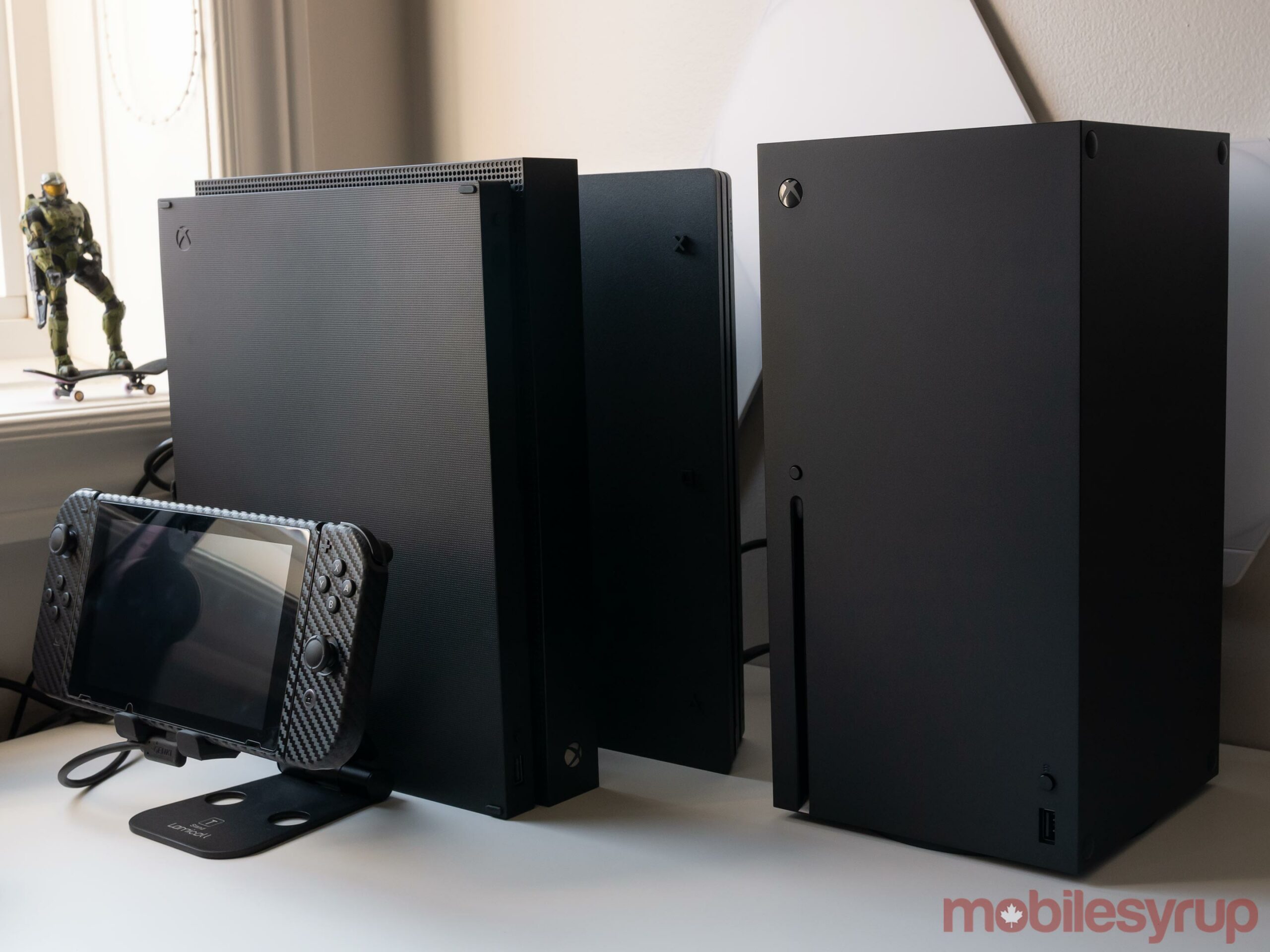 I find the Series X looks the best when standing vertically, mainly because of its circular bottom stand that sticks out of the side of the system when it’s placed horizontally. I ended up sitting it vertically on the desk in my office, along with my other video game consoles.

The top of the Series X features surprisingly large vent holes that include a touch of green, which is a cool throwback to the original Xbox and Xbox 360’s classic iconography. This is also where most of the console’s cooling system sits. Thankfully, at least so far, the Series X is incredibly quiet, especially when compared to the Xbox One X, which sometimes sounds like a small helicopter sitting on my desk.

The 4K Blu-ray disc drive is on the left side coupled with an eject button, and then there’s a sync button and a USB-A port on the right side of the base of the console. There’s also an on/off button identical to the Xbox One’s and Xbox One X’s glowing switch. 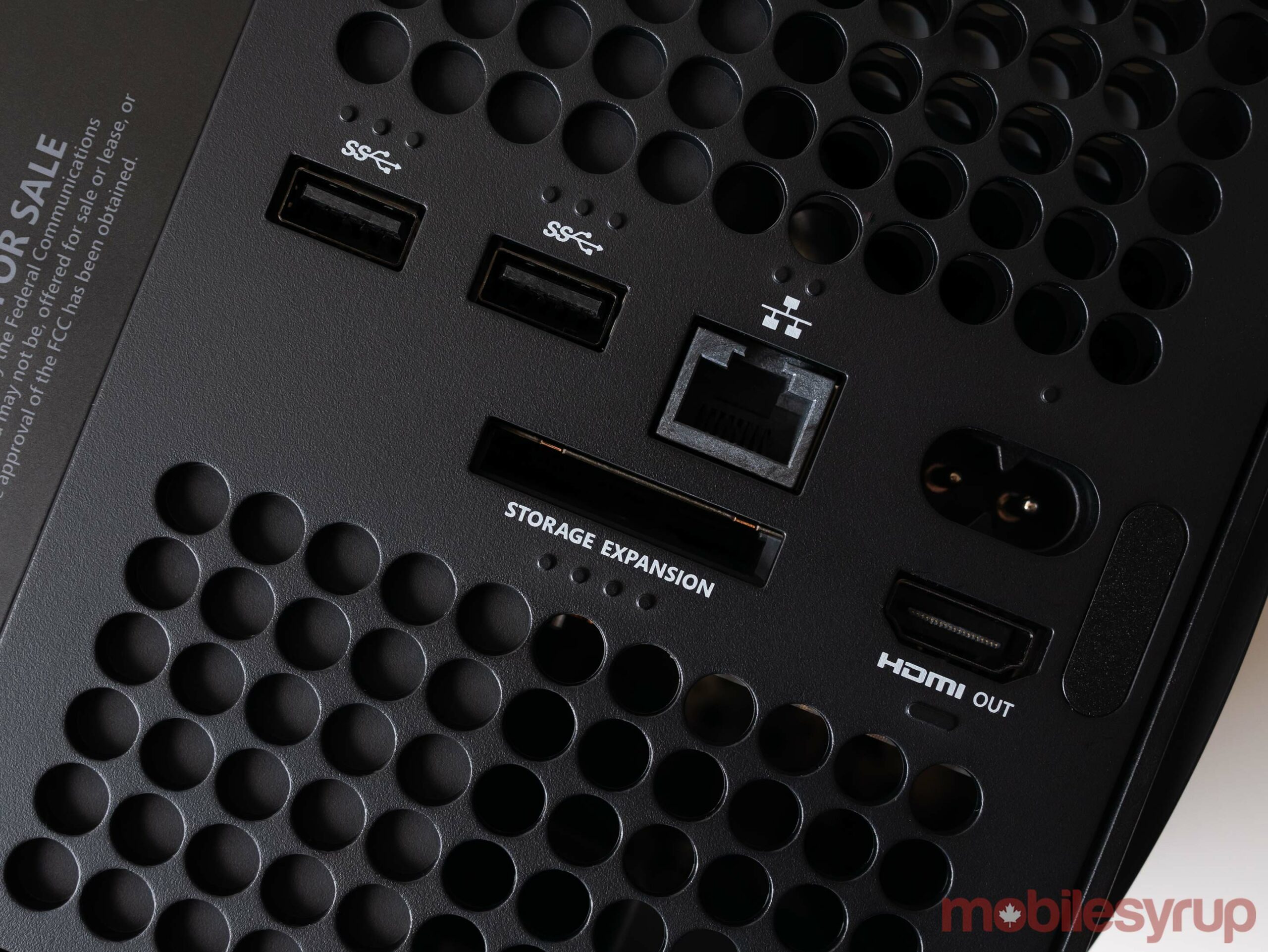 The rear of the Series X features two USB ports, an ethernet port, a Storage Expansion slot (I’ll be discussing the Storage Expansion Card in more detail later), an HDMI 2.1 port and, finally, a power port. Strangely, the console doesn’t feature a USB-C port anywhere, which is weird given that most modern devices include at least one at this point.

Overall, I like the understated look of the Series X’s design. Its unique, PC tower-like shape makes it instantly recognizable and helps it stand out from previous generation Xbox consoles. 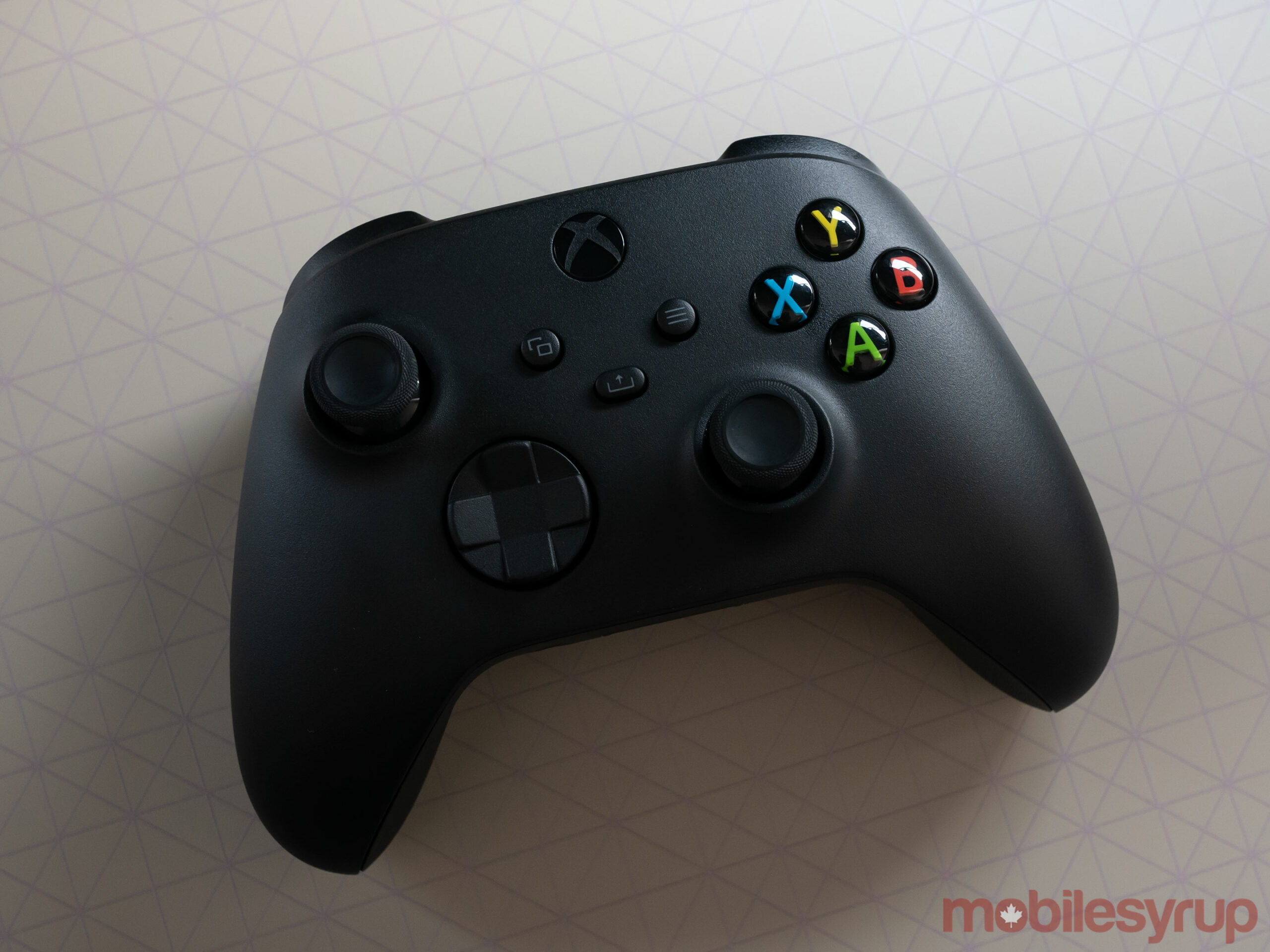 The Xbox Series X’s gamepad feels nearly identical to the Xbox One’s controller, with a few minor improvements that seem to be borrowed from the Elite and Elite Series 2 controller. In that same vein, the Series X’s and S’s controller also features a more textured grip. It’s not rubbery like the Elite gamepad’s, but it does add much-needed grip to the controller.

First, the size and shape of the gamepad have been altered to make it smaller and more contoured. I found this makes the gamepad a little easier to hold, especially for extended gaming sessions. The D-pad has shifted from the standard cross shape to a circular design similar to the Elite controller’s. 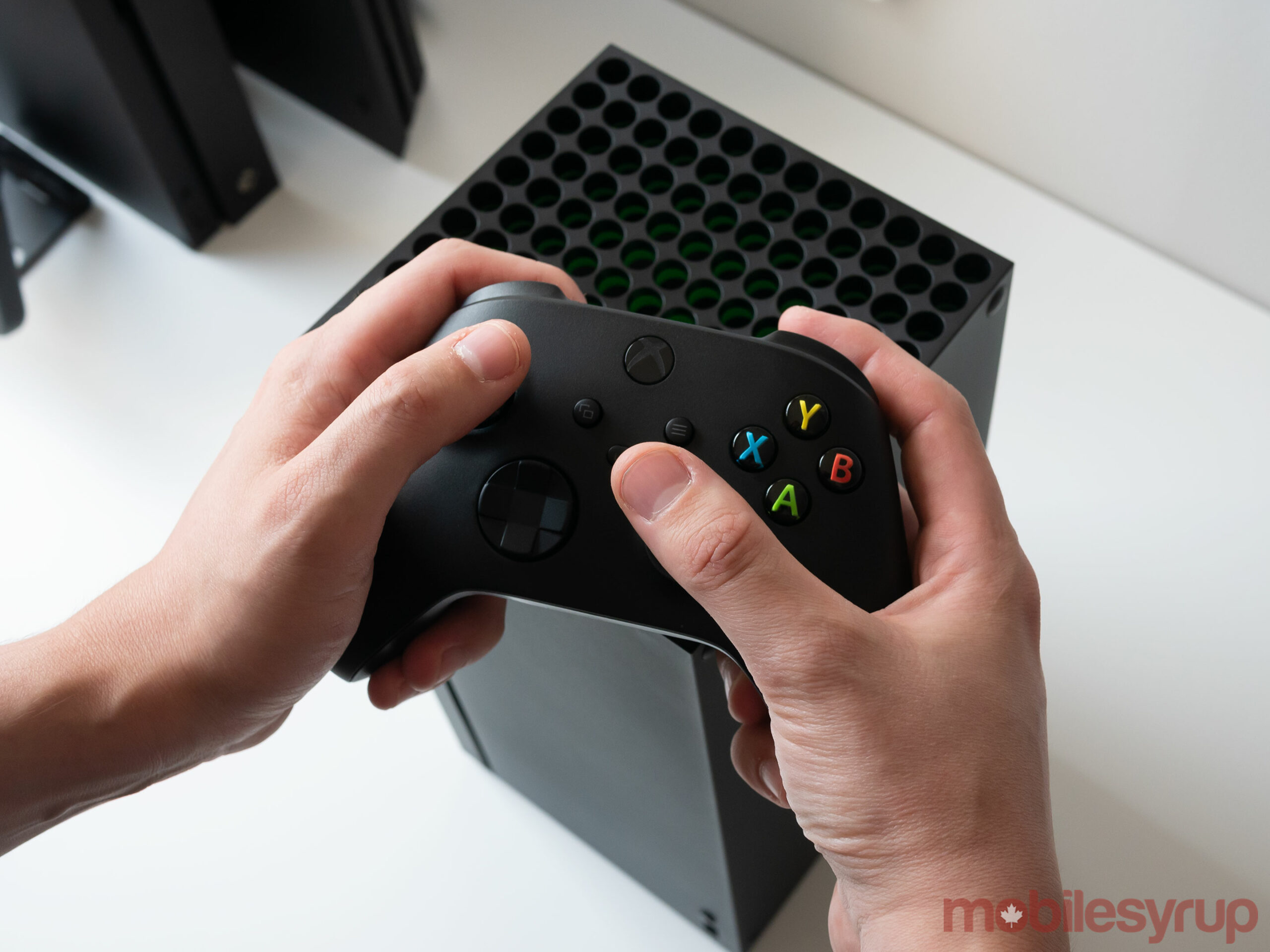 The ‘A,’ ‘B,’ ‘X,’ and ‘Y’ buttons seem to have slightly more bounce to them as well. The main new features include a USB-C port and a dedicated share button in the centre of the gamepad that makes snapping screenshots and taking videos a much easier process.

There’s also still no internal battery, with Microsoft instead sticking with two AA batteries. Some might take issue with this, but I’d much rather pop a pair of rechargeable or non-rechargeable batteries in than deal with a battery that always dies — I’m looking at you, DualShock 4.

Overall, the new gamepad is excellent and builds on the Xbox One controller’s already nearly flawless design. The controller that comes with the Series X is ‘Carbon Black,’ while the gamepad for the all-digital, less powerful Series S is ‘Robot White.’

I didn’t think Microsoft’s often-touted next-gen features like ‘Quick Resume’ were going to end up being as impressive as they are.

The feature allows you to continue playing several games from a suspended save point, including backward compatible titles across every Xbox console generation.

I tried this functionality with several games, including Assassin’s Creed Odyssey, Red Dead Redemption II, Ori and the Will of the Wisps, Tony Hawk’s Pro Skater 1+2, Far Cry 5 and more. Though the speed at which I was able to jump between different titles fluctuated slightly, Quick Resume worked flawlessly.

I’m not the type of person who plays several games at once typically, but I do often find myself killing time in a primarily single-player game like Tony Hawk’s Pro Skater 1+2 before jumping into multiplayer with friends. This feature makes that process much quicker. However, there does seem to be a limit to the number of titles you can have running with Quick Resume that is likely based on the console’s memory cache. For example, I had Sea of Thieves, Gears of War Ultimate Edition, Ori and the Will of the Wisps and Red Dead Redemption II running, but when I launched Far Cry 5, Quick Resume for Sea of Thieves, the first game I had opened, closed.

Further, while I can’t delve into specific details regarding the Series X’s Dashboard, I can confirm that it runs far smoother than even the Xbox One X’s operating system.

Leading up to the Xbox Series X’s release, Microsoft has been touting the console’s ability to load games much faster, including backwards compatible Xbox One titles.

In my experience, the tech giant’s lofty claims surrounding quicker loading times seem to be accurate. Titles with exceedingly long load times on the Xbox One like Gears 5, Assassin’s Creed Odyssey and State of Decay 2 all load far more quickly on the Series X thanks to the console’s unique Velocity Architecture.

Microsoft describes its Velocity Architecture as “the combination of custom hardware and deep software integration,” and says it features four major components: the console’s custom NVME SSD, hardware-accelerated decompression blocks, a new DirectStorage API layer and Sample Feedback Streaming (SFS). If you don’t understand what any of that means, you aren’t alone. 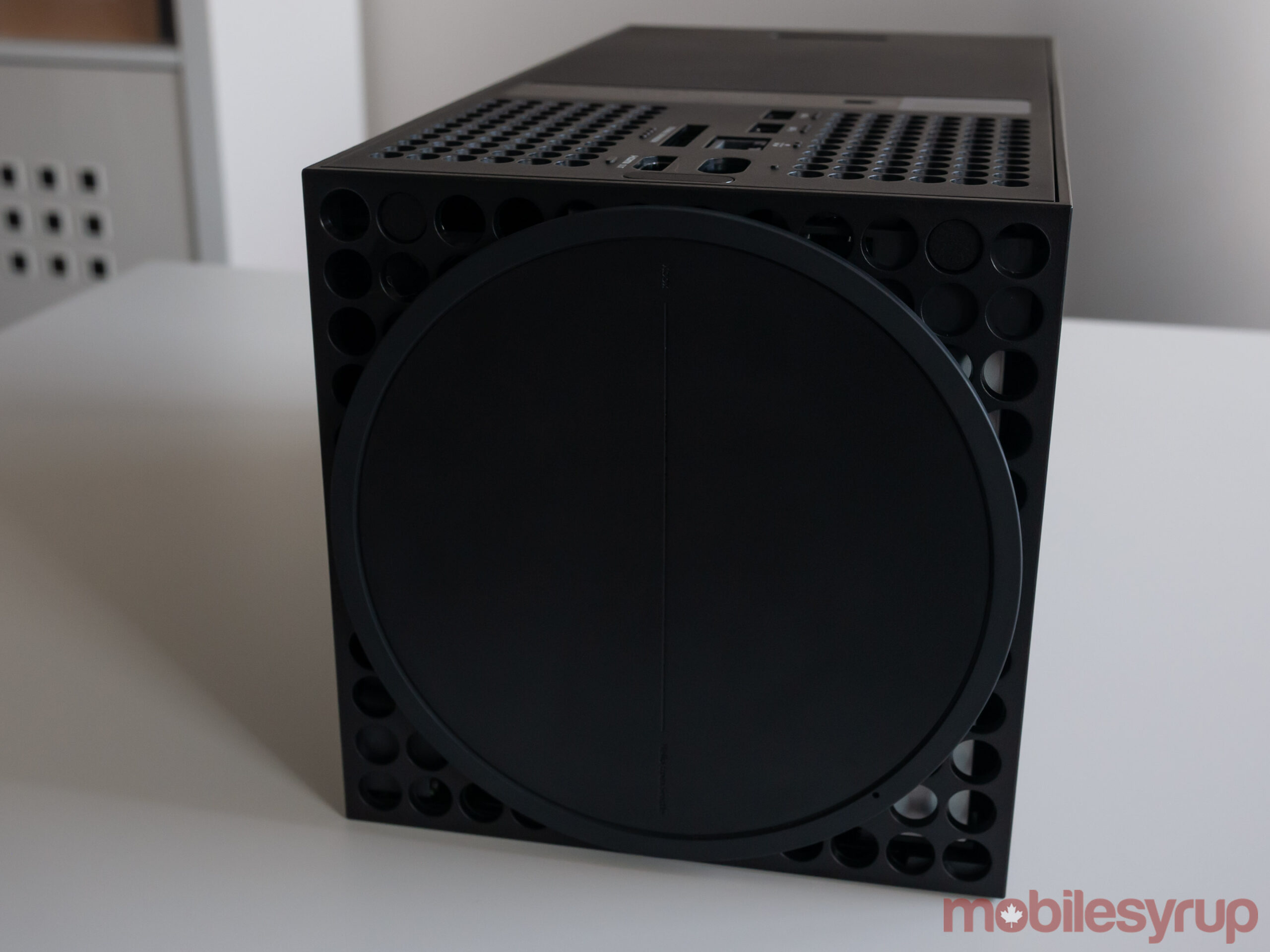 While many televisions and monitors feature an automatic mode that attempts to increase dynamic range and colour accuracy based on one universal profile, Microsoft’s system takes things a step further by using a machine learning algorithm based on real-life heatmaps of the game in question’s picture to create a more accurate HDR image. 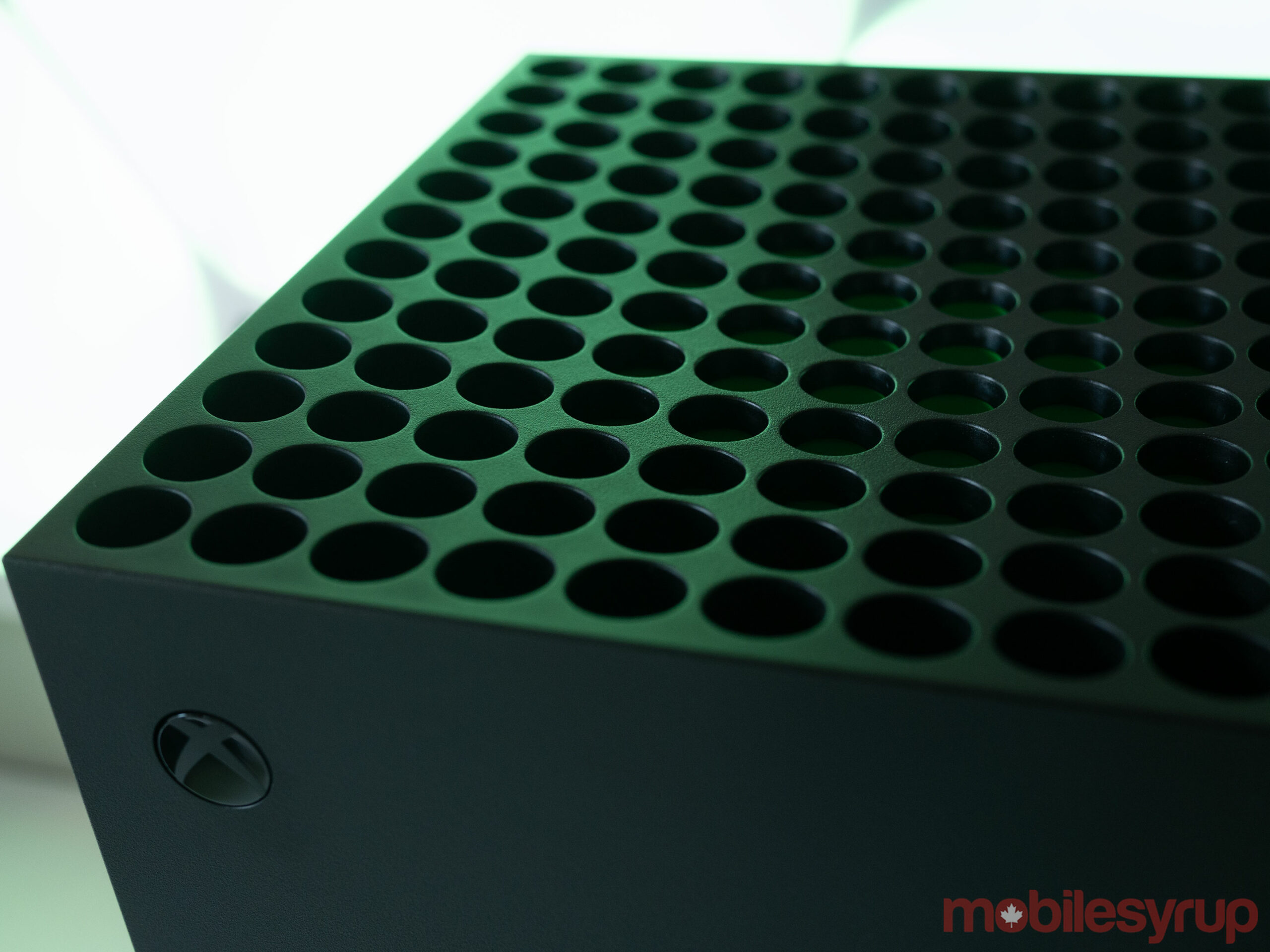 I tested this out with Sunset Overdrive and Gears of War: Ultimate Edition and can confirm the experience is largely the same as titles that were developed natively with HDR10 in mind. It will be interesting to see how this feature looks with other games, including original Xbox titles, as Microsoft adds more games to the Xbox media preview program for the Series X.

Further, since the Series X features additional hardware power, games like Assassin’s Creed Odyssey, which plays in 4K on the Xbox One X, seems to run a bit smoother on the next-gen hardware.

There’s still a lot to test out for the Series X, including 120Hz compatible titles like Gears 5 that aren’t currently available in the preview build I have access to. While I did play Ori and the Will of the Wisps on an HDMI 2.1 compatible 55-inch LG CX OLED television LG provided me with, the game doesn’t seem to support 120Hz yet. It’s likely that the feature will be patched in at some point during Microsoft’s media preview program. 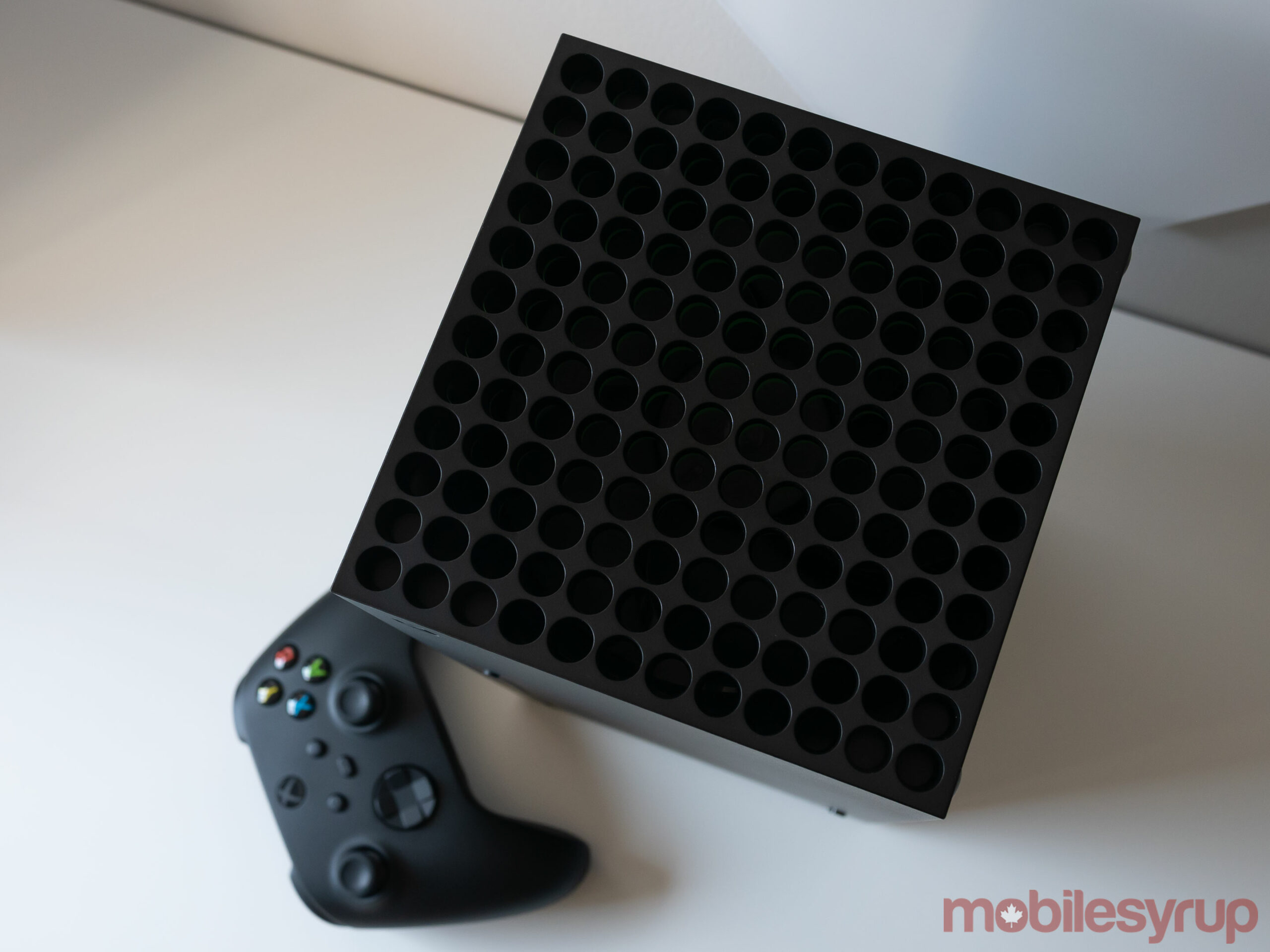 It’s worth noting that an HDMI 2.1 compatible television is necessary to experience Series X games in 120Hz. While most television manufacturers offer at least one high-end TV line that features the new technology, the TVs typically cost in the over $2,000 range.

Given that the number of backwards compatible Xbox One games and announced Series X games that support the higher refresh rate is still minimal, most people are likely better waiting a few months until more television models start to include HDMI 2.1 ports.

It’s also unclear how common 120Hz games will be on the Series X, with Microsoft only so far promising 60fps as the standard. Of course, if you’re an early adopter like myself, you’ll want to have a HDMI 2.1 compatible TV to experience all of what Microsoft’s new console has to offer.

Note: This is the first of several preview features related to a near final build of the Xbox Series X. Each story focuses on a different aspect of the console within Microsoft’s embargo restrictions.