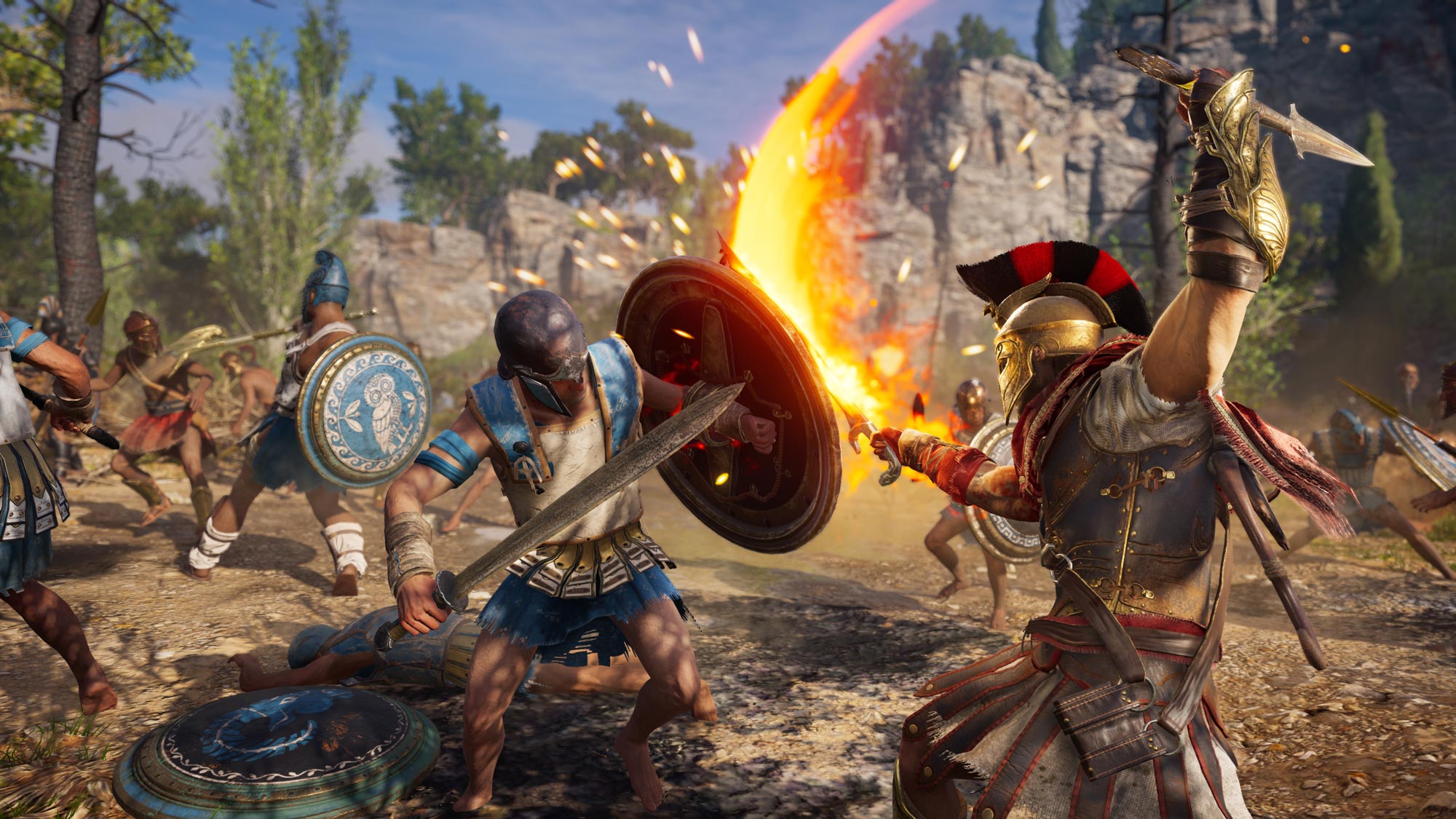 Ubisoft Quebec’s Assassin’s Creed Odyssey is the best Assassin’s Creed title yet in the series, though some could find that the game takes the franchise in a bold new direction they’re not fond of.

This shift started with last year’s Ubisoft Montreal-led Assassin’s Creed Origins, the first game in the series to adopt action-oriented role-playing mechanics, including a more in-depth character development system, customizable armour and an abundance of side quests that often, unfortunately, were a chore to play through.

With Origins, I felt like I was forced to play far too many mundane missions to level-up Bayek and continue progressing through the game’s otherwise compelling core story missions. 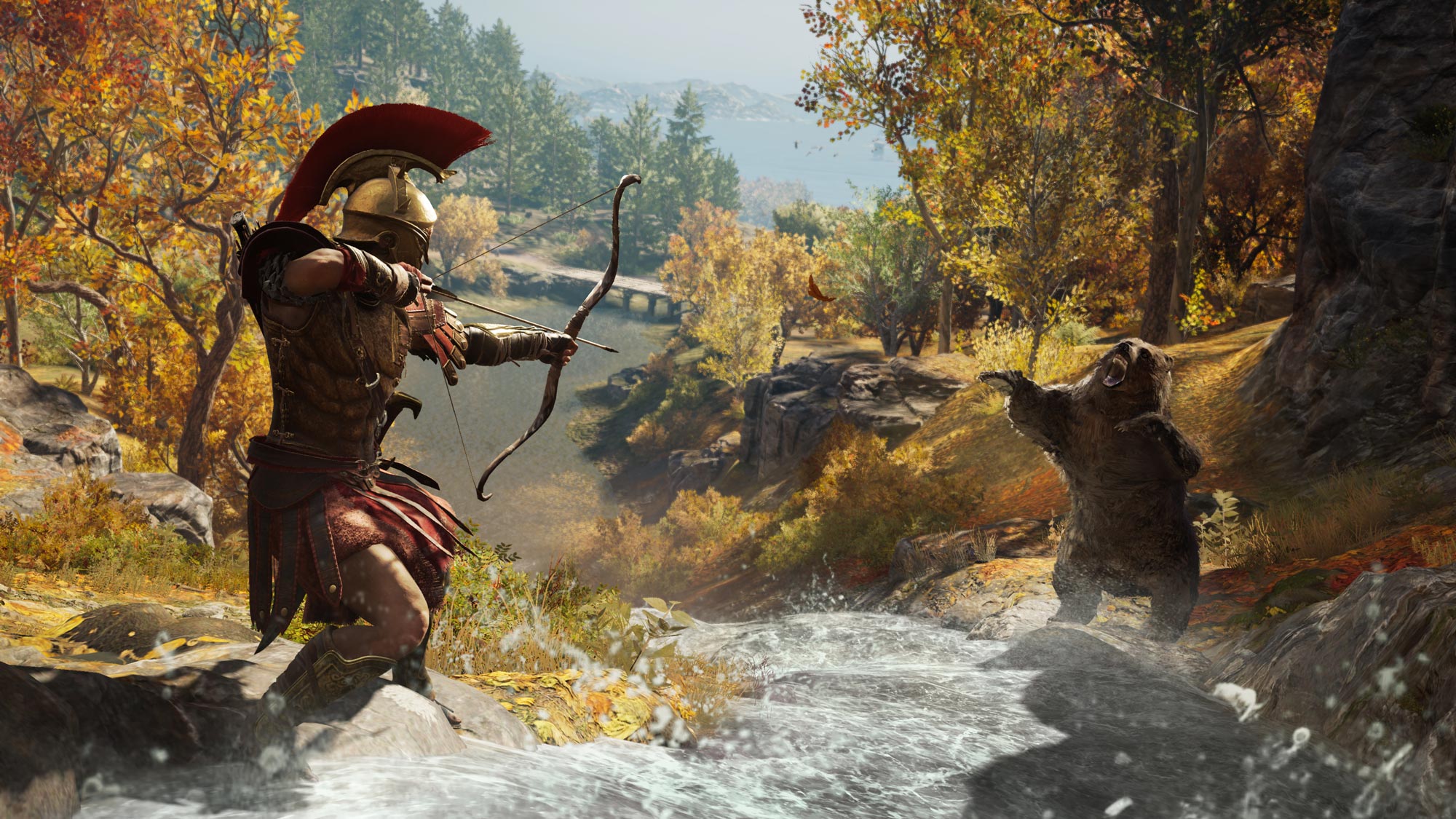 This isn’t the case with Odyssey, thankfully. While sometimes the same frustrating level-gating is still present in the game, side missions are far more exciting and feel closely integrated to the game’s core story, at least in most cases.

Odyssey continues to transform the Assassin’s Creed franchise into the a type of game that has more in common with series like The Witcher and Mass Effect, rather than earlier entries in the once stealth-focused franchise. The game also ditches Origins’ compressed take on Ancient Egypt for a slightly more grounded look at 431 BC Ancient Greece.

In Odyssey, you take on the role of either Cassandra or Alexios, giving players the opportunity to progress through the entire game as a woman for the first time in the series’ history. To be clear, 2015’s Assassin’s Creed Syndicate, the franchise’s entry set in Victorian England, featured brother and sister main characters the player frequently switched between.

While Michael Antonakos‘ Alexios is at times entertaining, Melissanthi Mahut’s Cassandra is the franchise’s most interesting and compelling protagonist so far. Her performance is both nuanced and believable, which is a step in the right direction for Assassin’s Creed. Further, it’s great to see a compelling woman as a main character in an Assassin’s Creed title for the first time.

The game’s story also feels more stripped down when compared to other Assassin’s Creed titles. That said, those who preferred the series’ more grandiose tales will likely take issue with this shift. Given that Alexios and Kassandra’s story is set hundreds of years before the Brotherhood of the Assassins, a consistent narrative thread in the series until now, Ubisoft has ditched most of Assassin’s Creed‘s convoluted lore in order to tell a more personal, character-driven story.

Further adding to this intimate feel is the addition of the franchise’s first-ever dialogue system. In various moments through the game, you’ll be able to make decisions that will result in different quest outcomes and can even lead to one of several possible endings.

In many ways, Odyssey is a just game about a person trying to find their family in an effort to reconnect with them, a topic Melissa MacCoubrey, the game’s narrative director, discusses at length during a recent interview with MobileSyrup about the game. 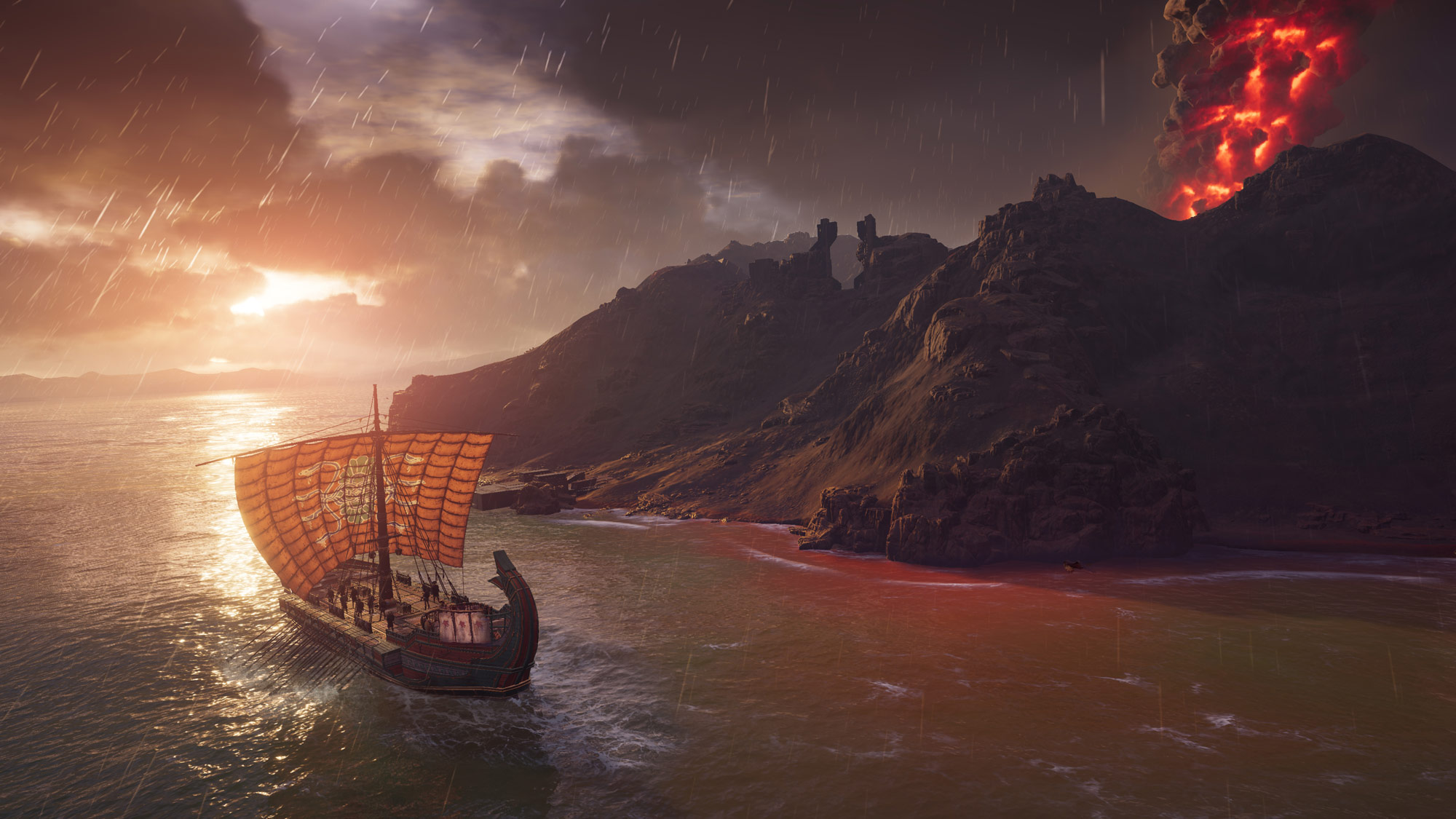 As someone who has lost interest in nearly every Assassin’s Creed narrative at some point and has probably never wholly understood the seemingly never-ending Assassins-Templar conflict that has been a mainstay in the franchise for a decade now, I hope this is how the franchise’s story continues moving forward.

Perhaps most importantly, Ubisoft Quebec’s take on Ancient Greece feels real, even more so than Origins’ Ancient Egypt. Specific large cities, notably Athens, feel huge and feature an attention to detail I found stunning, especially when running in native 4K on the Xbox One X.

Side quests are present in abundance and are interesting, and the world’s rolling landscapes are a joy to explore. I’d even go so far as to say that they reminded me of The Legend Of Zelda: Breath of the Wild at times, especially when playing around with Odyssey’s new ‘Exploration Mode’ that removes quest markers.

There’s a lot of water in Odyssey, however. This means that naval combat, one of the Assassin’s Creed series’ more controversial changes, is back and more important than ever. Ships control fluidly and the general mechanics of the water combat are far more in-depth when compared to past games in the series. Still, those who didn’t like Assassin’s Creed IV: Black Flag’s ship battles will not enjoy the naval combat featured in Odyssey. 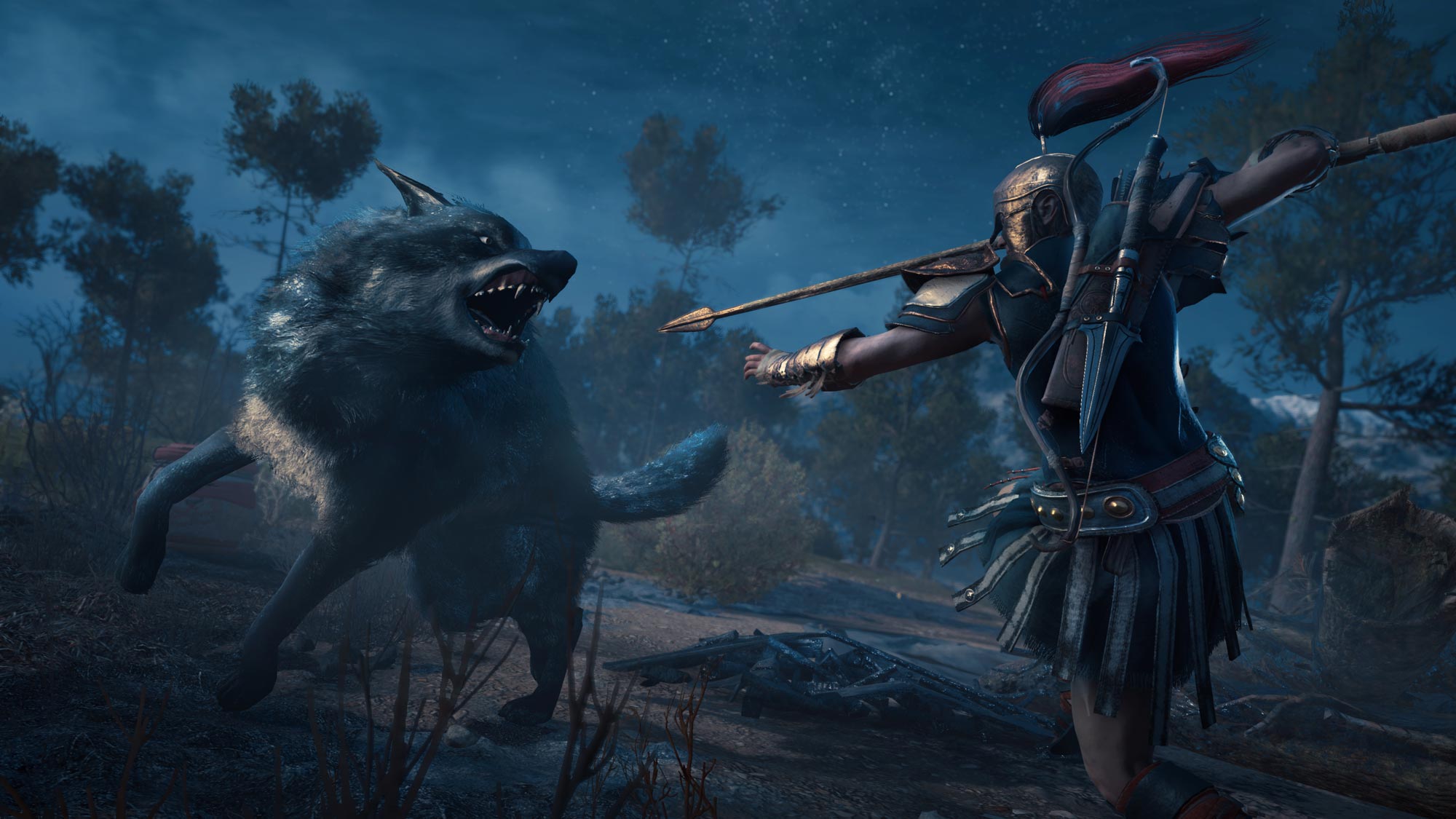 Combat in Odyssey also feels the same level and depth as its predecessor, with timing being even more important this time around. A missed strike, especially during 100-person ‘Conquest Battles,’ can easily result in your untimely death. Parrying and precise button presses quickly become a necessity, especially as you hit the game’s later missions.

Speaking of Conquest Battles, these large-scale mini-wars are a dream come true when it comes to my personal relationship with the Assassin’s Creed franchise. I’ve always imagined what it would be like to see the massive battles featured in the promotional trailers for the ultimately disappointing Assassin’s Creed III come to life — with Odyssey, that’s finally happened.

Through Conquest Battles, players are able to decide whether Sparta or Athens controls a specific piece of land, with players taking down specific high-ranking soldiers to deplete an on-screen metre and reign victorious. These missions aren’t easy and at times can be very frustrating, but they’re an interesting twist on the standard Assassin’s Creed formula that I’ve grown to appreciate. 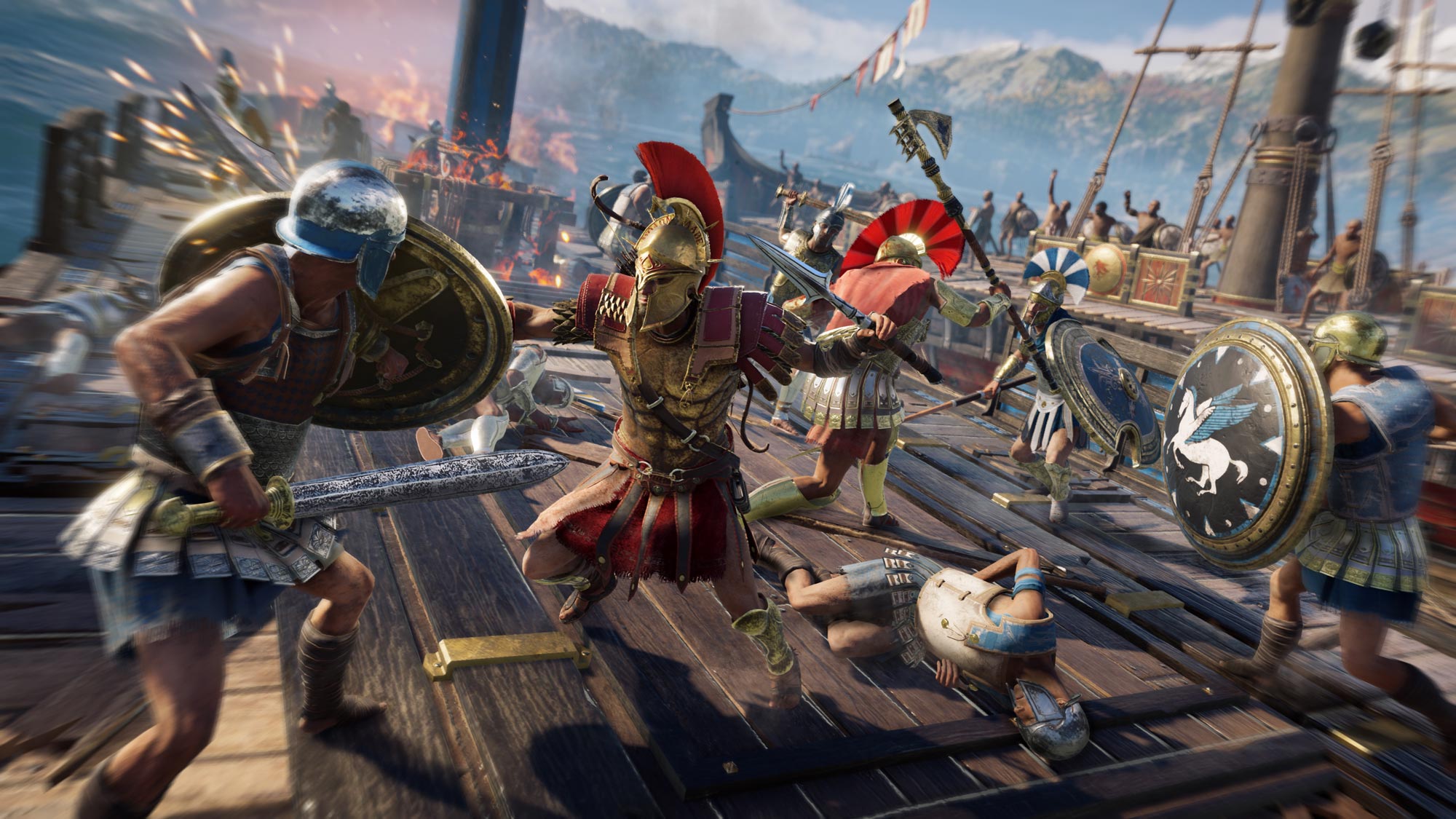 The new ‘Mercenaries’ system, which has powerful enemies hunting down your character at any time, even in the middle of a mission, is also a welcome addition to the game. The mechanic, which again, I admittedly found frustrating in some situations, obviously takes inspiration from Middle-earth: Shadow of War‘s Nemesis System. While some might take issue with this, Mercenaries randomly showing up unannounced often brought much-needed variety to some of Odyssey’s more mundane missions.

If Odyssey could be criticized for one thing, it’s the fact that the game doesn’t feel like an Assassin’s Creed game in the traditional sense anymore.

To me, this is the series growing and evolving in a constantly changing video game landscape.

A once rapidly-ageing franchise that felt like it was one entry away from being shelved following the disaster Unity evolved into for Ubisoft, is now arguably back at its peak and more relevant than ever.

Assassins’s Creed Odyssey is now available on the Xbox One, PlayStation 4 and PC.