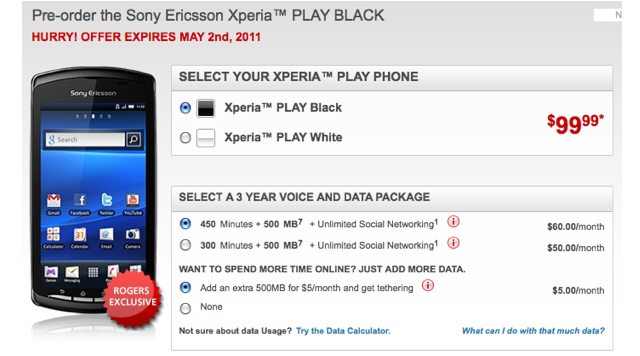 Rogers has moved one step closer to the launch of the Sony Ericsson Xperia Play and arc. These are both Android-powered devices and yesterday we revealed that they will be priced at $99.99 on a 3-year contract. Today interested parties who want to get their hands on one of these devices can now pre-order them at Rogers (also confirming the price plan).

A few notes looking at the dedicated site shows the pre-order offer expires May 2nd which goes against the internal doc with an “late April” release date. In addition, Sony Ericsson and Major League gaming are partnering up for the Xperia Play and they have thrown together a “MLG Orlando Prize Pack” valued at $4000 that if you pre-order could see you take a trip to a MLG event.

We captured a couple video of both of these devices in action. Check out the Play here and the arc here.

The 3-year pricing actually came in cheaper than I thought for the Play (thought it would be $149.99). Although the no-contract price was not revealed what do you think of the contract pricing?

Go forth here at Rogers