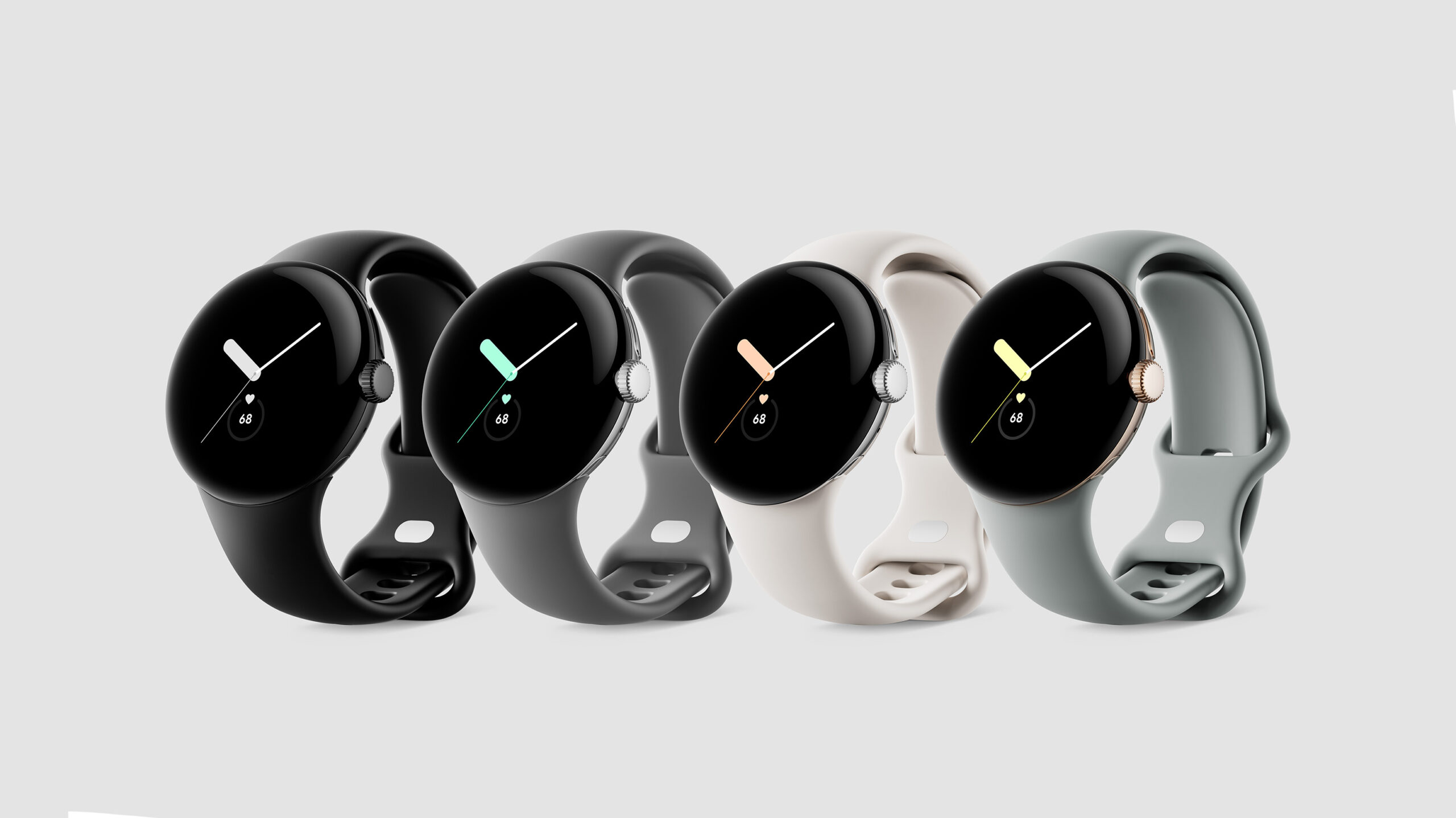 The Pixel Watch looks, well, exactly like all the leaked details. It’s not much of a surprise — Google itself posted teaser videos showing off the Pixel Watch design in the weeks leading up to the reveal. I’ll keep the design section short since we already know most of those details.

The watch will be available in ‘Chalk,’ ‘Charcoal,’ ‘Hazel,’ and ‘Obsidian.’ Google says there will be seven band families, including active, leather, metal links, stretch, woven and other bands. Each band family includes several colour options. 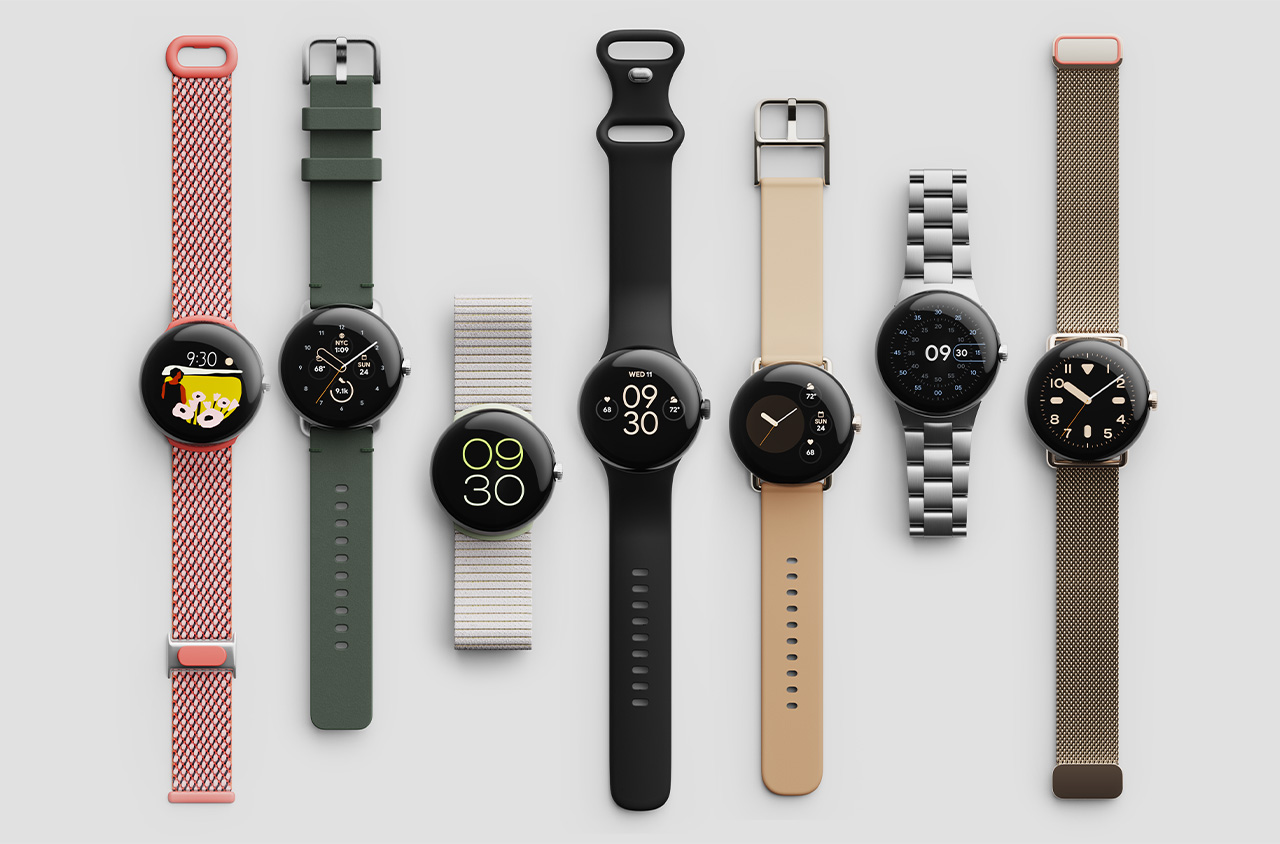 Regarding tracking, the Pixel Watch includes several Fitbit tracking capabilities, like ECG, but lacks some functions present in Fitbit’s latest Sense 2 smartwatch, including temperature sensing. Google says the Pixel Watch also supports SpO2, but that it had nothing to announce about SpO2 yet. Presumably, that means the Pixel Watch will get support in the future.

For the swimmers out there, the Pixel Watch is 5ATM swim-proof, which means the watch can withstand pressure equivalent to a depth of 50 metres.

Google says that the Pixel Watch will offer sleep tracking, access to 40 workout modes, Fitbit’s ‘Daily Readiness‘ score, Active Zone Minutes, and more. However, to make the most of the Fitbit-based health features, you’ll need to use the Fitbit app on your Android phone. Google went so far as to describe Fitbit as the “heart” of the Pixel Watch fitness experience.

Also like Fitbit watches, to make the most of the Fitbit experience on Pixel Watch, you’ll need a Fitbit Premium subscription. Google includes six months of free Premium with the Pixel Watch. Fitbit Premium costs $12.99/mo or $104.99/year in Canada and offers expanded data and insights, more workouts, mindfulness sessions, and access to things like Wellness Report and the Health Metrics Dashboard.

On the Google side of things, the Pixel Watch will get a bunch of capabilities aimed at making people’s lives a little easier and safer. The Pixel Watch runs Wear OS 3.5 and will offer Google Maps, Wallet, Assistant, and ‘Emergency SOS’ for 911 calls and fall detection.

Google says the Emergency SOS features require a cellular connection, and fall detection won’t arrive until the winter. It’s unclear if (or how) these features will work in Canada, but that will hopefully change in the near future.

Google’s Pixel Watch will also have access to other Wear OS apps, with Google highlighting options like Spotify, Strava, Bitmoji, Adidas Running, MyFitnessPal, Calm, and more available from the built-in Play Store. Moreover, Pixel Watch will offer integrations with Google’s Pixel smartphones, such as the ability to use the watch as a remote control for a Pixel phone’s camera, use Find My Device, and more.

Finally, the Pixel Watch will offer 18 watch faces with complications, generally split between ‘personal’ and ‘informative.’ However, Google indicates users would be able to customize this, adding information to personal faces or reducing items on the informative faces to make them less cluttered.

The Pixel Watch will be available to pre-order on October 6th and releases on October 13th. The smartwatch starts at $449.99 in Canada. You can learn more on the Google Store.

For more on the Pixel Watch, check out our hands-on with the wearable. For all of MobileSyrup’s content from Google’s fall hardware event, follow this link. To learn more about Google’s environmental initiatives, follow this link.