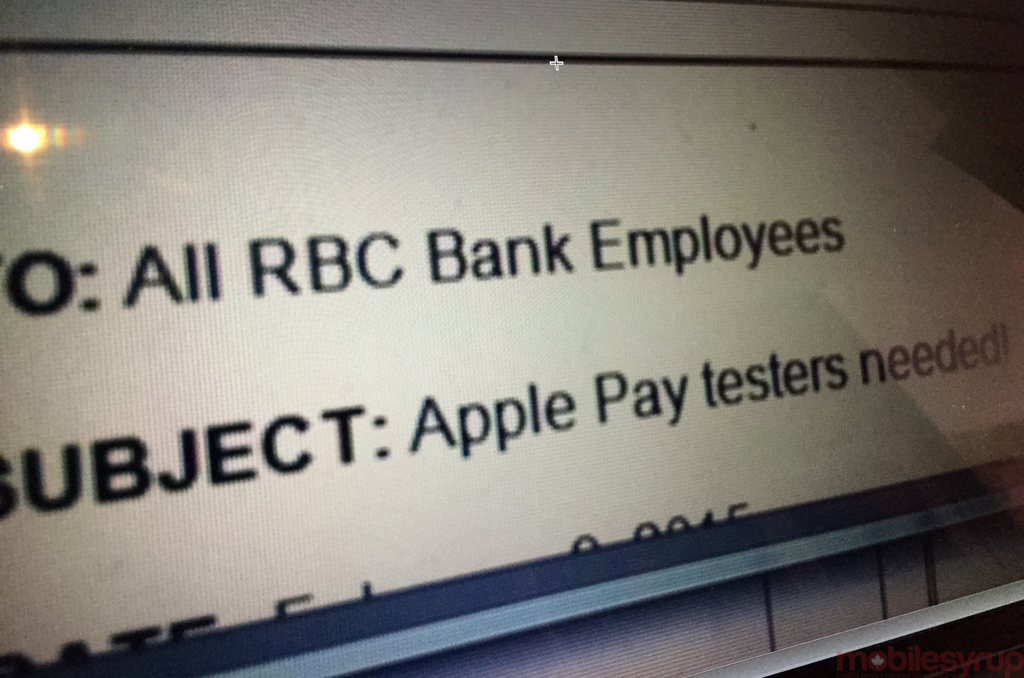 Update: We have received the bulletin in question and have more information about the Apple Pay rollout. While the pilot project is meant for Canadian employees, it still exists within the confines of the U.S. banking system, as it is aimed at those with an RBC Royal Bank USD chequing account or RBC Bank US credit card.

While this doesn’t rule out the possibility of Apple Pay launching in Canada this spring, it does remove some of the bite from its perceived imminence. We sincerely regret the error.

We’ve heard that Apple Pay will be coming to Canada this year, and we’ve heard it won’t. We also heard directly from a bank executive that mobile payments won’t really take off in the country until Apple Pay launches.

We now have evidence that at least one bank, Royal Bank of Canada, and likely many others, are preparing to launch Apple Pay in the coming months. Just yesterday, we learned that Apple included code for Apple Pay support on China Unicom in a coming iOS build, and Tim Cook hinted during the company’s most recent earnings report that it would be rolling out to other countries this year.

According to a source with details of RBC’s plans, Canada’s largest bank will begin internal Apple Pay testing in the last week of February, a process that will continue for two to four weeks. It’s unclear whether Apple intends to announce additional Apple Pay markets alongside the Apple Watch launch in April, but since the company has reiterated a number of times that the payment service will be closely tied to the wearable, it wouldn’t be surprising.

Canada’s market is primed for a service like Apple Pay, which relies on the presence of NFC-friendly payment terminals and the well-established EMV chip-and-pin technology. Most banks, including RBC, already offer similar mobile payment solutions for Android and BlackBerry that rely on similar fundamentals.

This has been a long time coming. MasterCard Canada’s head of emerging payments, Jason Davies, told us last year that the Canadian market is primed for Apple Pay: consumers are knowledgeable; merchants have the technology; and the banks have rolled out their own solutions already. Visa Canada, though non-committal on rollout plans, shared similar thoughts with us.

In December, Royal Bank of Canada announced the support of Host Card Emulation, a technology that moves the secure element necessary for storing confidential credit card details from the device to the cloud. According to Linda Mantia, the bank’s head of payment solutions, the technology, currently limited to Android devices running KitKat or above, would remain an internal pilot project until Apple was ready to release its own payment solution in Canada. “We’re going to be quiet until we have a solution for Apple clients,” she said at the time. That time appears to be approaching.

Apple Pay was announced alongside the iPhone 6 and 6 Plus back in September. Apple added NFC antennas to its two latest devices, allowing users to tap-and-pay at supported payment terminals. Integrated with Passbook, Apple managed to get most large US banks on board, recently announcing that 2000 financial institutions have signed on. A credit card is added to the iPhone by taking a photo of the front and back, or entering the numbers manually. Once verified through the participating bank, that information is stored in a Secure Element, physically separated from the rest of the hardware. Once a user approaches a payment terminal, he or she is prompted to authenticate using Touch ID, Apple’s fingerprint sensor, removing the need for a PIN code or password.

Apple Pay also uses a technology standard called ‘tokenization‘, recently solidified by Visa and MasterCard, which replaces one’s credit card numbers with a random set of digits that can only be parsed by the associated bank. This cuts down on man-in-the-middle theft, as the numbers transmitted over the air to the payment terminal bear no resemblance to those on the card. A ‘token’ can be reused multiple times, or a new one generated upon each transaction, depending on the bank’s implementation.

With Apple Pay coming to Canada, banks, carriers and even Google are anticipating an exponential rise in both consumer awareness and use. The iPhone 6 accounted for a huge number of carrier sales last quarter, so there is already a large install base of Canadian smartphone users able to take advantage of the service when it does launch.

Both Apple and RBC declined to comment for this story.