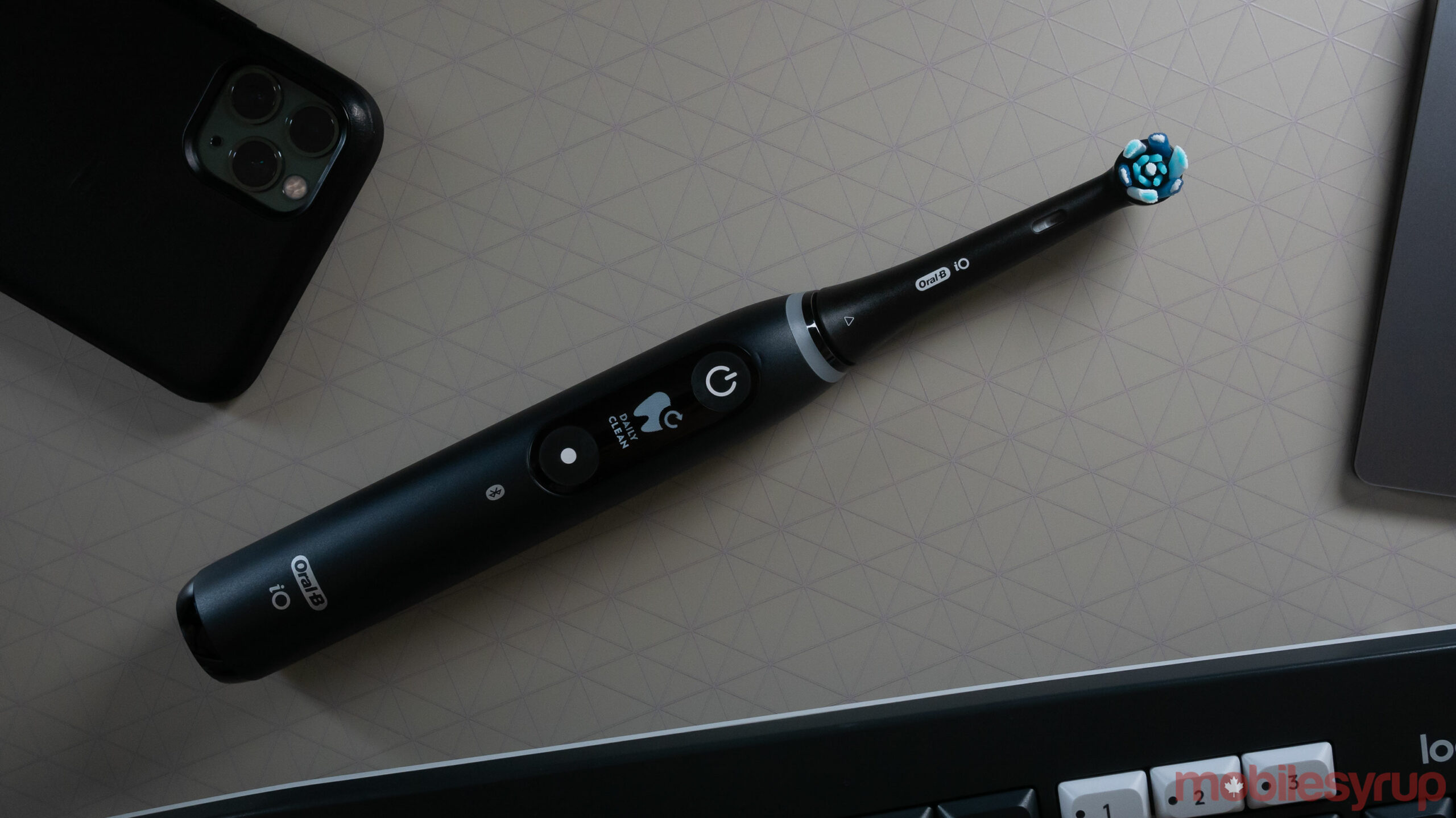 Over the years, I’ve tried several smart toothbrushes, and while I’ve found some that were fantastic (like Oral-B’s Genius X), I must say that the iO stands apart as the most technologically advanced model yet.

After using the Oral-B iO I would highly recommend it, especially if you’re always looking for the newest and greatest model on the market. 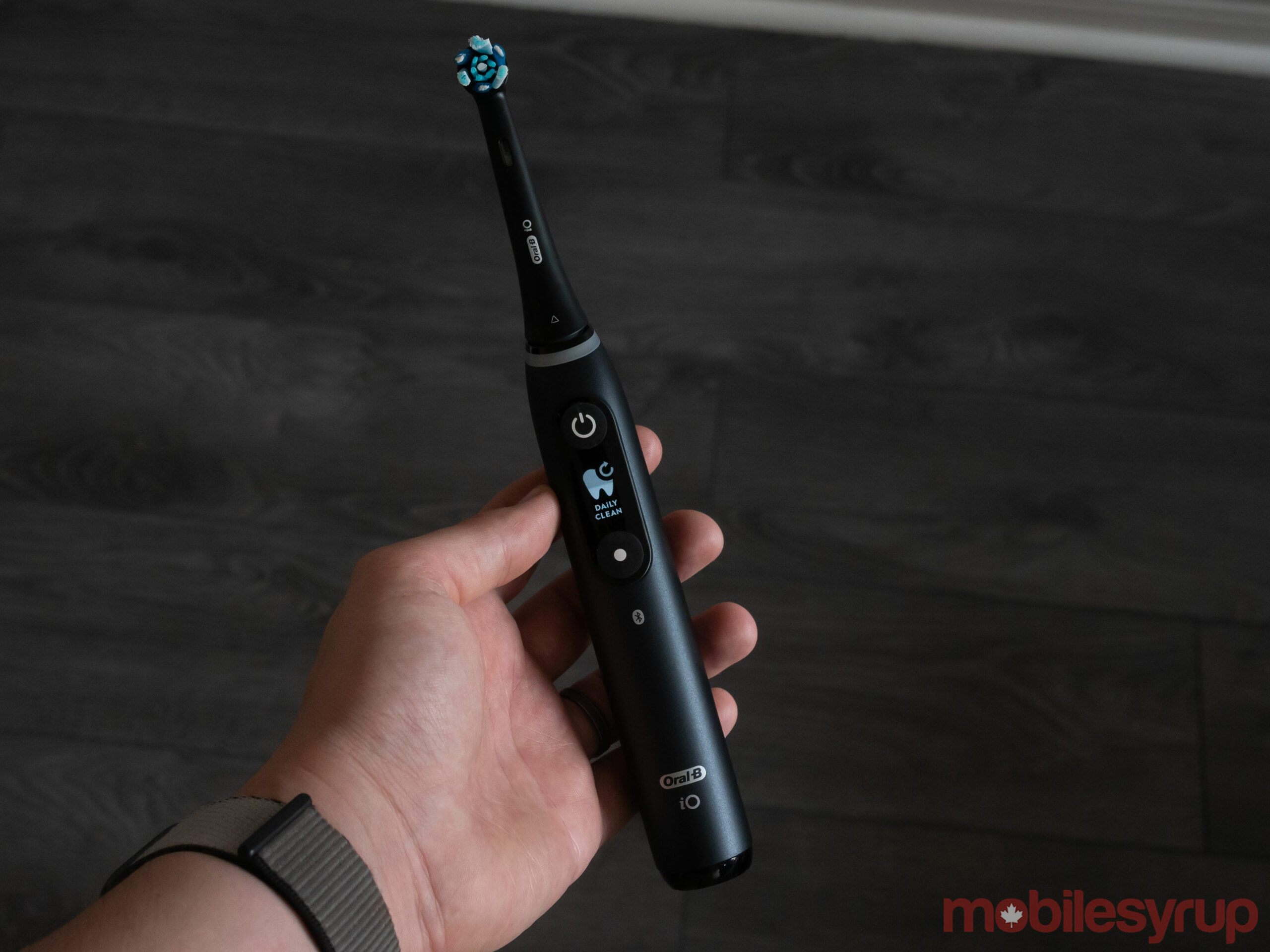 Announced at CES last year, Oral-B has been developing the iO for a long time. The company says six years of research and development, as well as input from over 1,800 users and 250 dental patients, was used to create the iO toothbrush.

To start, unlike most electric or smart toothbrushes, the iO uses micro-vibrations along with oscillating, rotating movements to clean your teeth. This is all powered by a new linear magnetic motor that ensures these movements remain fluid while you’re brushing. The strength of the brush takes a bit of getting used to if you haven’t used an electric toothbrush before, and, while I can only speak from my personal experience, my teeth do have a professional clean feeling every day when I use the Oral-B iO compared to my other power toothbrush. 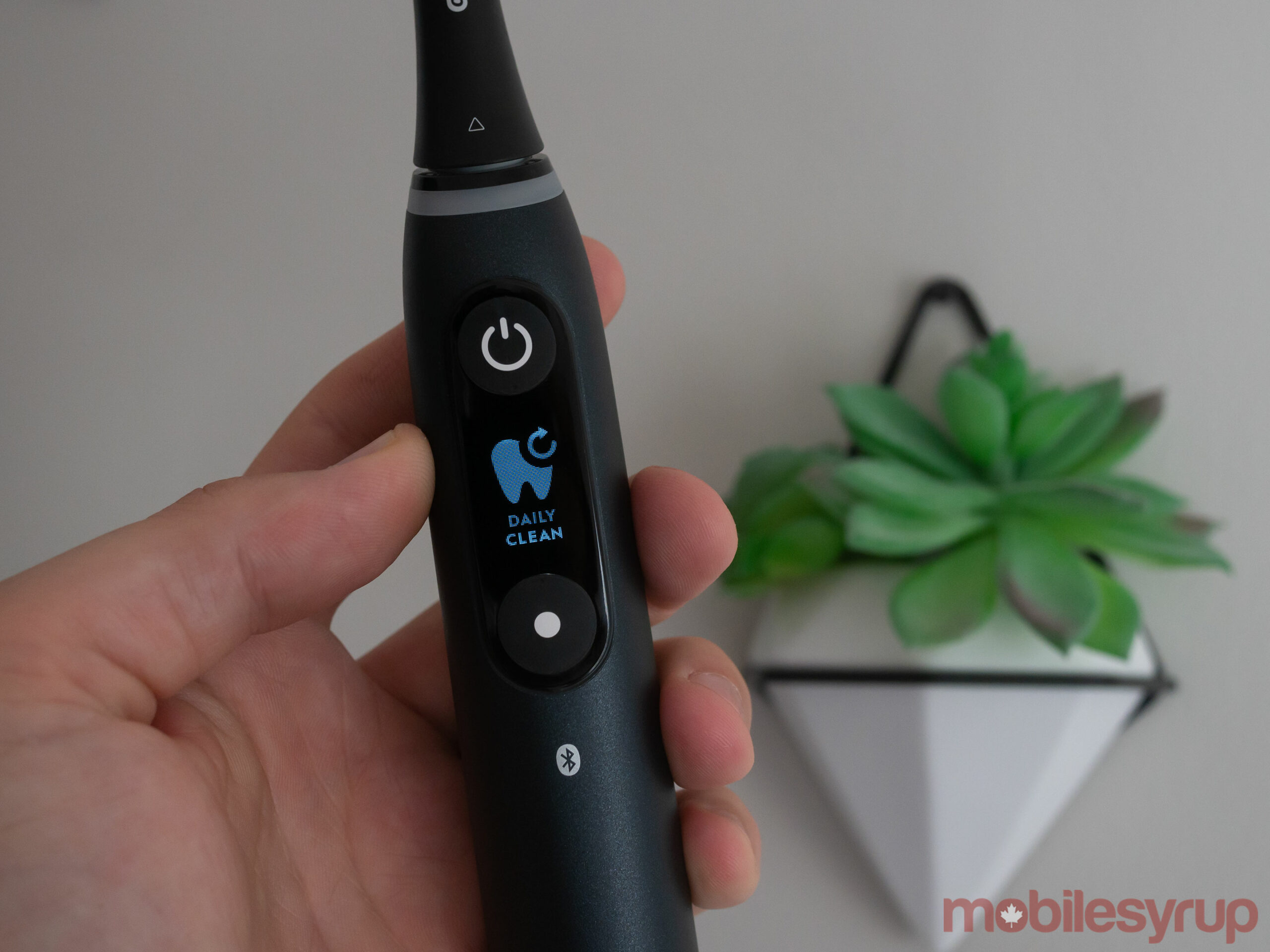 Along with the tech packed into the brushes, Oral-B’s iO toothbrush also features a tiny built-in display (yes, you read that correctly), and it’s quite intuitive and useful. The idea behind the screen is twofold. First, it aims to give you feedback when you’re done brushing, letting you know if you’ve cleaned your teeth for long enough via a timer and used an adequate amount of pressure, through various cute unhappy and happy faces. The screen is also how you navigate the toothbrush’s settings, including changing its light colour and switching between ‘Daily Clean,’ ‘Whiten,’ ‘Gum Care’ and ‘Intense’ brushing options.

There’s a pressure sensor built directly into the toothbrush that lights up when you’ve pushed the brush too hard against your teeth or gums. As someone who has minor receding gum line issues, this feature is quite useful and far more accurate and sensitive than it is with other smart toothbrushes I’ve used in the past. If you’re brushing with the right amount of force, the light stays green. On the other hand, if you’re pushing a little too hard, the light flashes red. These innovative features are really helpful to ensure you are taking care of your oral health, especially if you aren’t able to visit the dentist as often as you normally would right now. 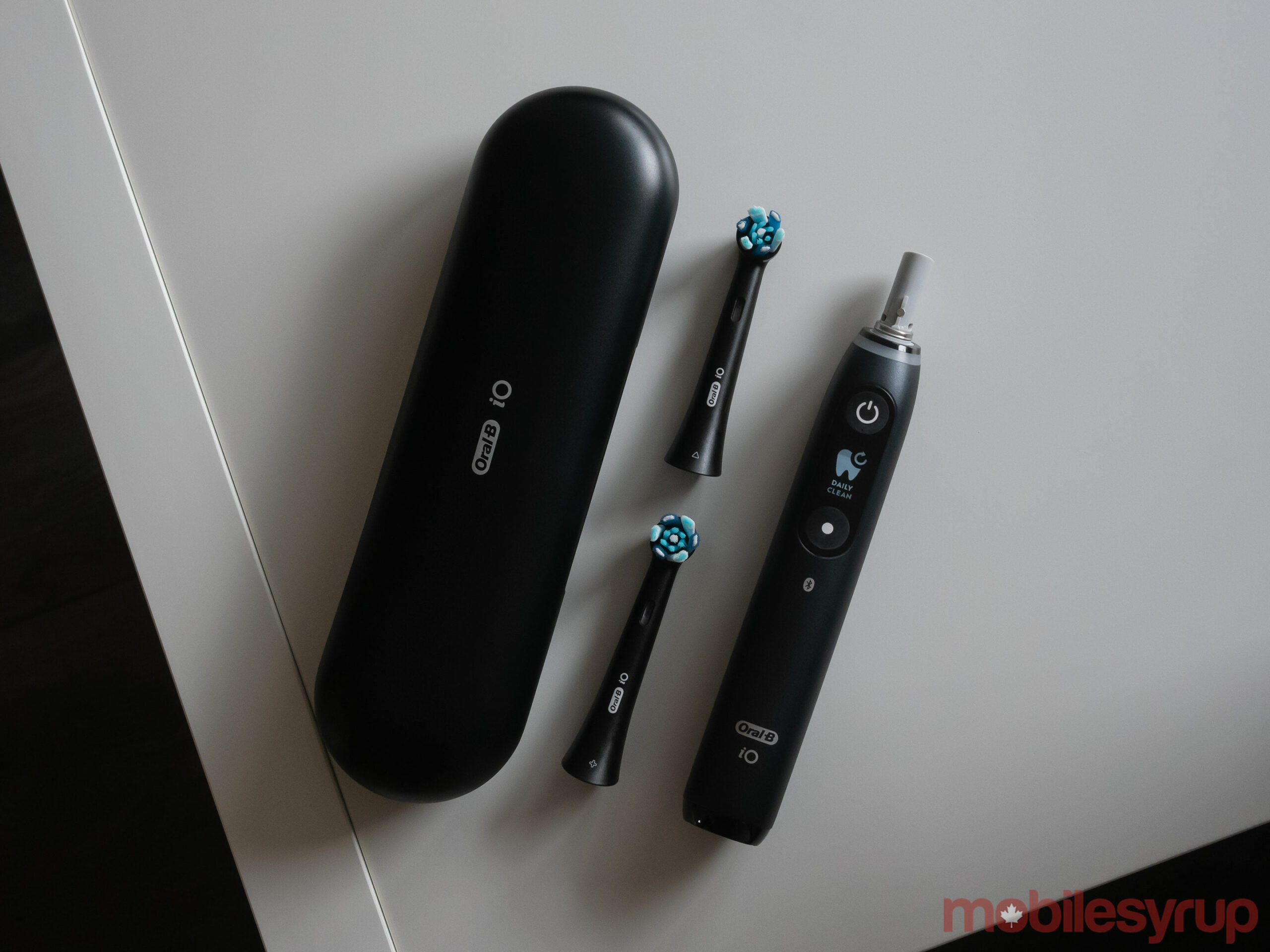 Unlike other smart toothbrushes I’ve used, the display also allows me to change the iO’s settings without being connected to a smartphone app. App connectivity with gadgets is often great, but when it comes to a toothbrush, in the past I’ve found it’s not something I feel I need every time I brush my teeth.

That said, Oral-B’s updated app features tracking and coaching based on your recorded brushes, giving you suggestions for how you can improve your brushing technique. The iO also offers personalized brushing encouragement in real-time. Unfortunately, I wasn’t able to test out app connectivity since Oral-B’s app hasn’t been updated to be compatible with the Oral-B iO given the product has not yet launched. This story will be updated with more information when the update is released along with the official product launch. 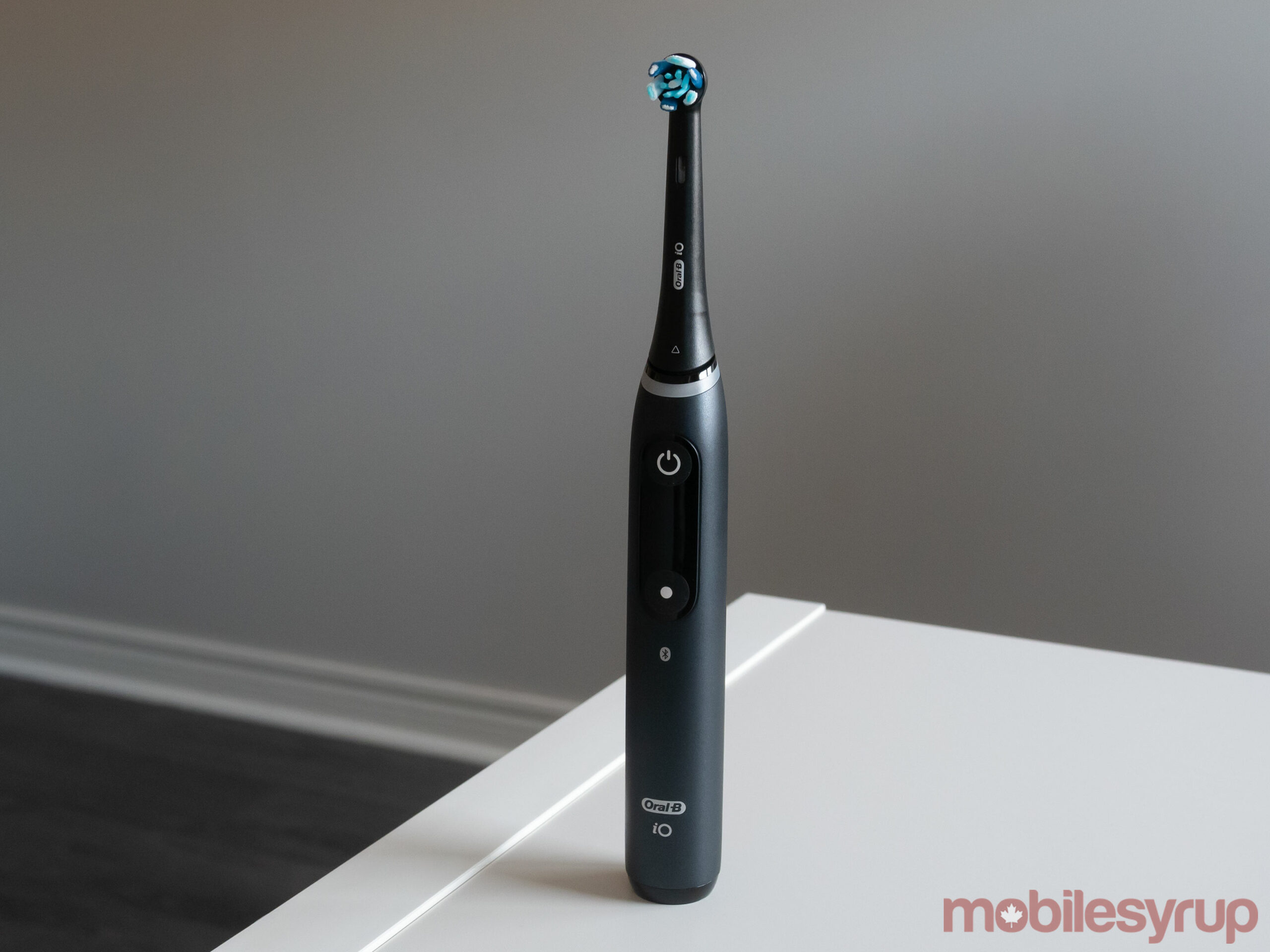 It’s worth noting that Oral-B ran clinical tests in comparison with standard toothbrushes, which found that 100 per cent of people had healthier gums after using the toothbrush for one week, and six times more plaque removal from the gum line.

Regarding its look, the iO is pretty unique to the smart toothbrush space. Usually, electric or smart toothbrushes are white and feature shiny plastic. The iO’s dark, matte black look has more in common with tech devices like a smartphone or a video game controller. The Oral-B iO will be available in 4 different colours – Black Onyx, White Alabaster, Violet Ametrine and Rose Quartz. Included in the box is a black carrying case and a pair of brush heads, with one being designed for sensitive teeth and the other featuring more rigid bristles.

The included magnetic charging base is capable of fully recharging the iO in three hours and is entirely wireless. You just place the toothbrush on the charger and it magnetically sits upright. Other smart toothbrushes I’ve used require the careful alignment of finicky pins before they’ll charge. 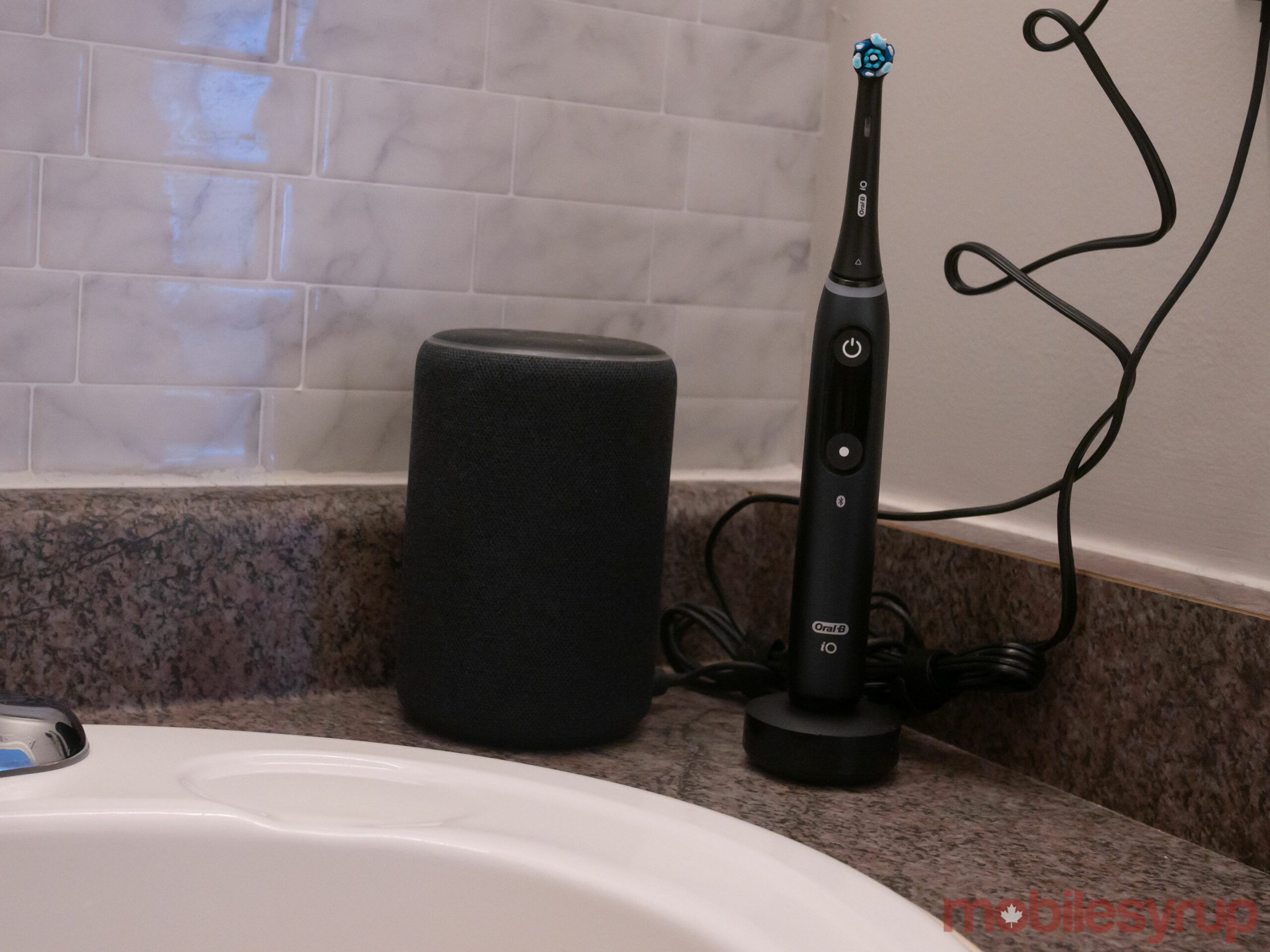 For those looking to up their toothbrush game, Oral-B’s latest effort seems a cut above the competition in several ways.

The Oral-B iO is launching in July 2020 online and in stores. Sign up at here for private offers exclusively for iO VIPs.