Google’s upcoming ‘Nearby Sharing,’ an AirDrop-like feature for Android that will let users easily share content between devices, is now in testing.

As spotted by Android Police, Nearby Sharing is rolling out in a limited test to some users through a combination of the recent Play Services beta and a server-side update. Despite the limited nature of the test, Android Police was able to get it working and test the feature out.

To start, Nearby Sharing may look different depending on the content you choose to share. In most cases, you’ll access it from Android’s share sheet — the interface that pops up when you tap the share button in several apps. Sometimes there will be a small button at the top of the share sheet next to the ‘copy’ button. Other times, users will have to scroll down to the ‘Apps list’ of the sharing interface to select Nearby Sharing. 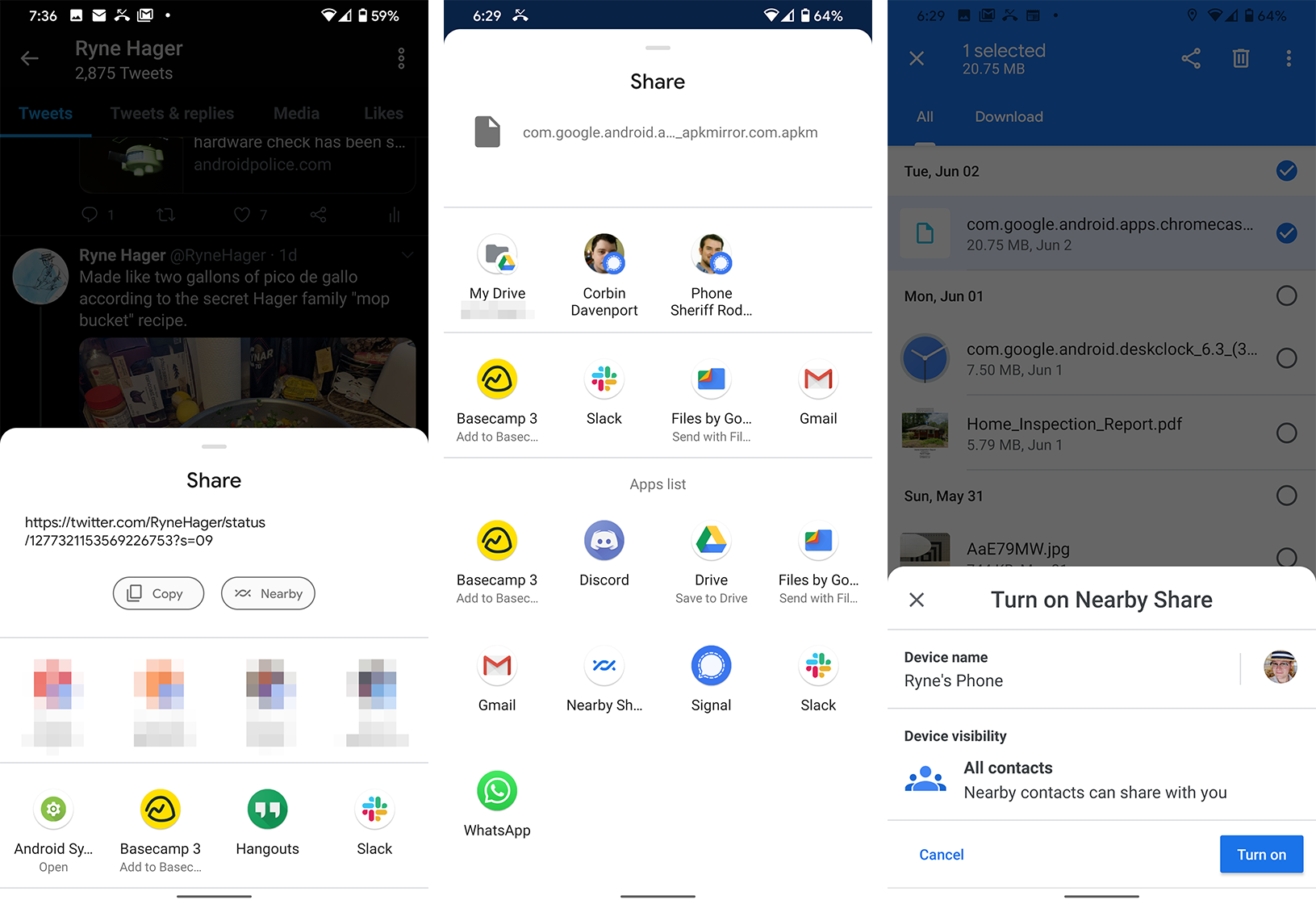 When you tap it for the first time, Nearby Sharing will prompt you to go through a short setup process. Users will need to configure their default device name and visibility settings, which can also be adjusted later on.

Users can customize their device visibility and how it shares content

Once enabled, Android Police reports that Nearby Sharing begins looking for devices. The feature’s interface is simple, showing the content you want to share at the top and a list of available devices below. Tapping the ‘X’ icon in the left corner of the UI cancels the process while tapping your profile picture in the right corner opens the settings.

Users can adjust their device name, visibility and the mechanism Nearby Sharing uses to make the transfer in this menu. Options include using your internet connection, a Wi-Fi connection between devices or ‘offline sharing,’ which could mean restricting the feature to a Bluetooth connection. 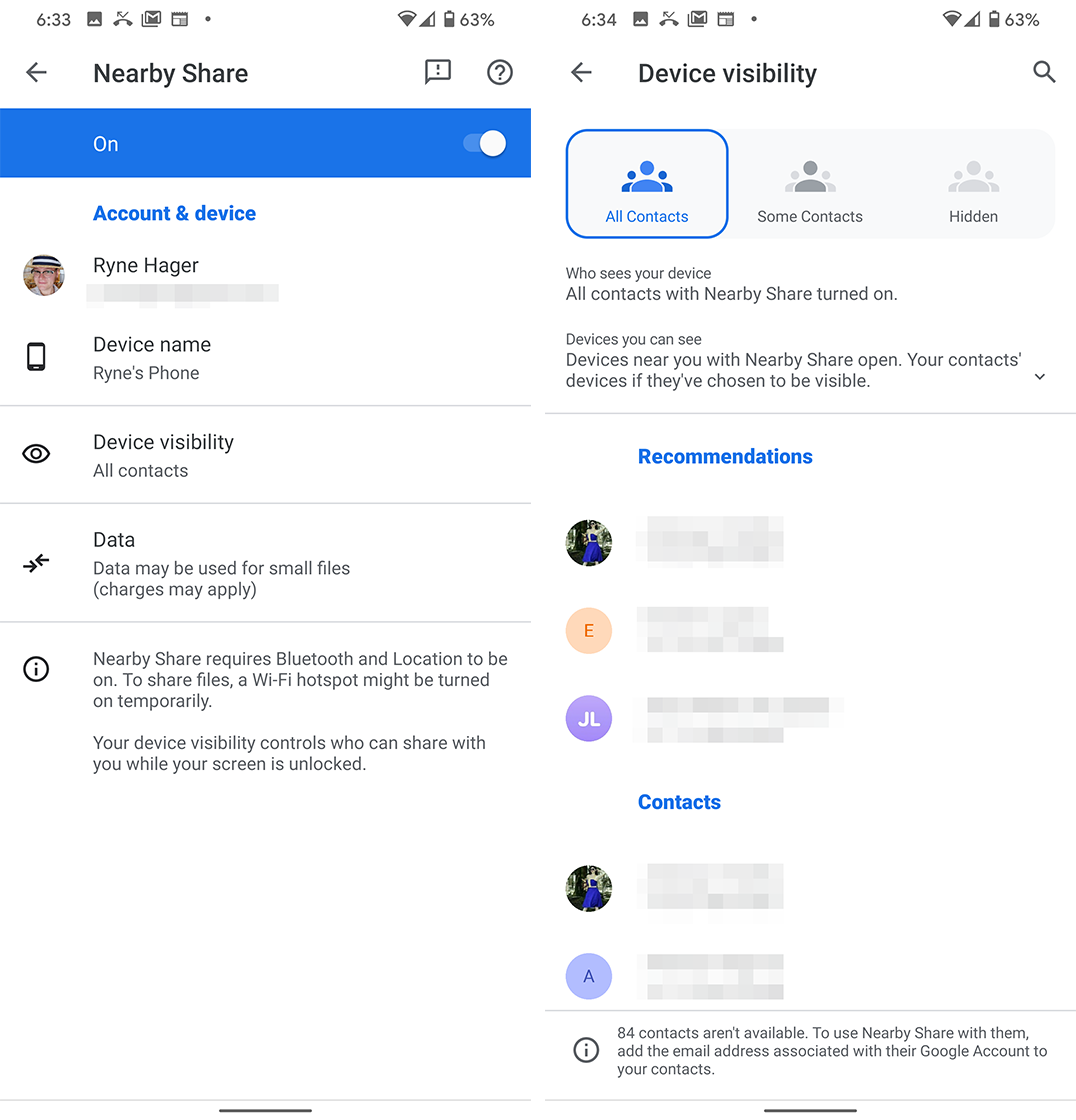 As for visibility, users can pick between ‘All Contacts,’ ‘Some Contacts’ and ‘Hidden.’ Ultimately, this likely means people won’t be able to use Nearby Sharing to send random photos to unsuspecting strangers on subway cars like with AirDrop.

Interestingly, it looks like those who have themselves ‘Hidden’ will still get a notification letting them know a nearby device is sharing. When that happens, the user can make themselves visible to nearby devices.

Sharing is quick and requires consent from both devices

Finally, the sharer can then select a nearby device from their screen. With the target selected, the receiver gets a prompt to accept or decline the share. After accepting, the content is shared between the devices. Android Police notes that this process happens fairly quickly.

Once received, Android will prompt the user to look at it. Depending on what the file is, it should open in its respective app — URLs in the browser, tweets in Twitter, pictures in the gallery app. 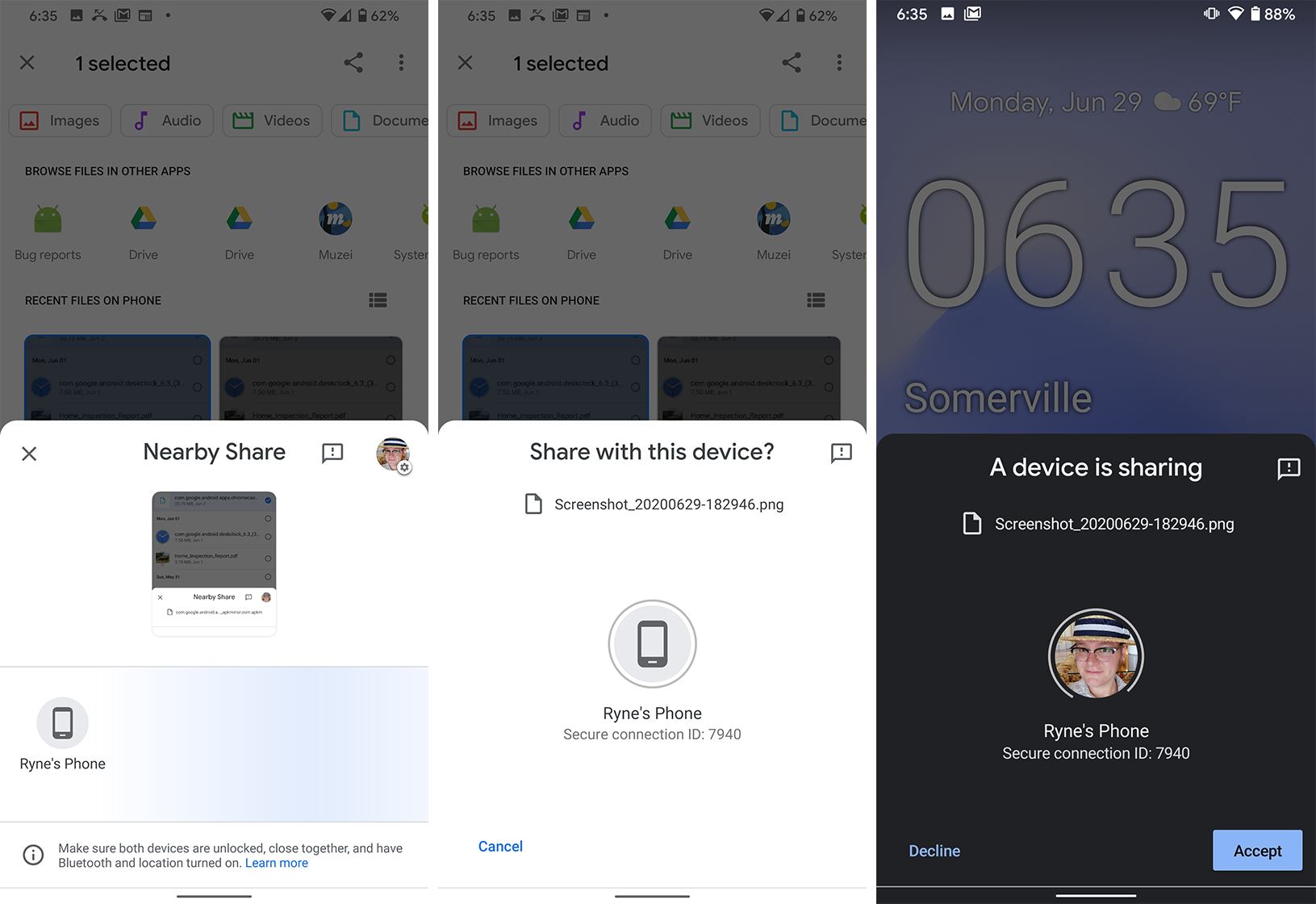 Overall, it seems like Nearby Sharing is well implemented and Google has taken appropriate steps to prevent misuse of the service. That said, it remains to be seen how well it works once it’s out in the wild. As mentioned up top, a Play Services beta and server-side update have brought the test to a limited number of Android devices.

However, Google plans to launch the feature with support for phones running Android 6 and up, as well as “other platforms.” Likely, that doesn’t mean iOS — instead, that’s probably a reference to support on Windows, Linux and macOS via Google Chrome.

If you want to try it out now, you’ll need to opt into the Play Services beta and hope you also get the server-side component that enables the test.