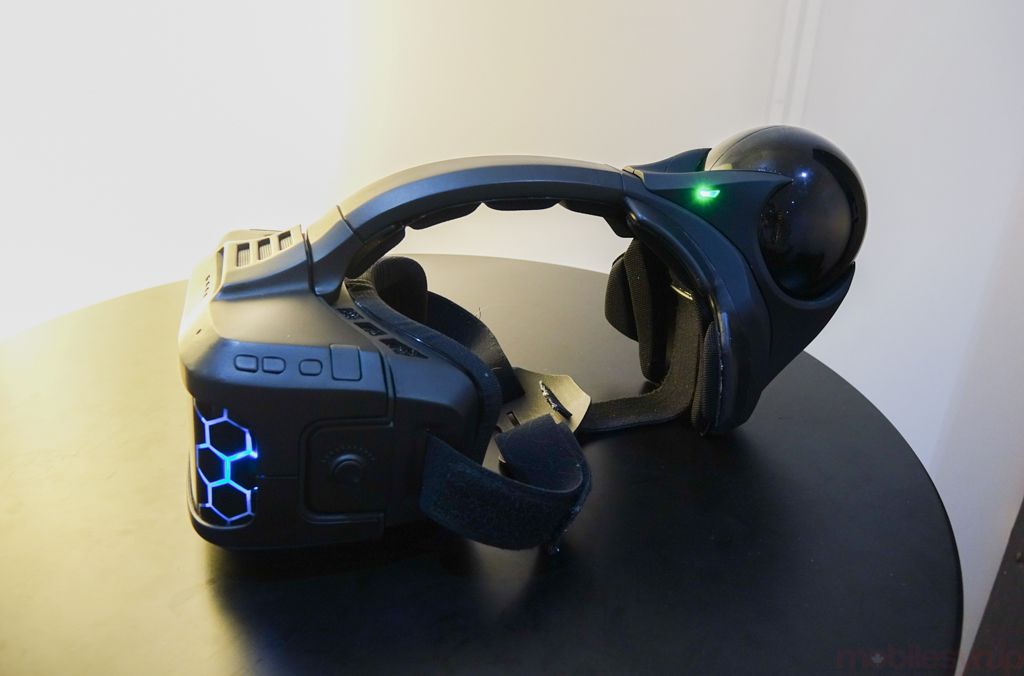 Virtual reality is about to hit the mainstream hard, with major players like Google, Sony, Samsung, Microsoft and Facebook behind it. According to a recent report by industry analyst firm CCS Insight, VR devices are set to explode from 2.2 million shipments this year to 20 million by 2018. According to CCS, enabling most of this growth are low-cost, mobile-powered VR options such as Google Cardboard and Samsung Gear VR, which CCS suggests will make up 90% of VR sales in 2018.

Toronto-based Cordon Media is betting on this smartphone-powered VR revolution. It’s VR device, Pinch, is a smartphone case for iOS and Android that converts into a wearable virtual reality headset. Pinch aims to be one of the first VR experiences for many with a portable “all-in-one” form factor and its affordable price point of $99. The company successfully funded its Indiegogo crowdfunding campaign earlier this year and is preparing its first run of products to be delivered to its backers by the end of 2015. Markham’s Sulon Technologies is creating a head-mounted device that sits at the opposite end of the spectrum. Sulon’s dedicated VR product aims to compete with the likes of Oculus Rift, Sony Morpheus, and even Microsoft’s Hololens. The company’s first product, Cortex, is a spatially aware computing platform which offers both VR and AR. The untethered HMD allows its wearers to walk freely around a room and move between a mixed reality experience to a completely immersive one fluidly. The Cortex received tons of accolades from those who tried it a CES this year, including our own Daniel Bader who said “no one is doing VR like Sulon,” and Tom’s Hardware who gave it their “Top Heads-Up Display at CES” award.

At CES, Sulon demonstrated the use of the Cortex’s AR capabilities for training purposes, where a wearer was able to view a virtual engine in the middle of the room and use gesture to explode it into its multiple parts and explore it from all angles. The company also demoed an AR/VR Hydra game where users walked towards a virtual door that appeared in physical space and transported the user to a completely immersive cave to attack a dragon. Gaming is just one of the major use cases CCS highlights as propelling the success of VR devices. The report predicts that video and film, travel, social, and marketing will also be huge for virtual reality. Marketing is one area that Toronto-based VR studio, Occupied VR, is seeing a recent influx of demand. Occupied VR co-founder J. Lee Williams told BetaKit, “There has been a massive boom of interest from the advertising agencies with brands who want to put the wheels in motion.”

Williams points to VR’s immersive ability as a reason why so many brands are jumping on board. “When you build something in VR and you put someone in it, it’s the best feeling to see them turn into a kid for a second – that’s why everyone is so excited and passionate about it,” he said. “That sense of wonderment is rewarding. If you can find a hook with your brand that has people in VR for a minute or two you’ve created a memory.”

What is even more exciting perhaps is that this we are just at the beginning of what VR is capable of. “It’s an amazing space to be in and it’s just at the starting point,” said Williams. “We are almost at black and white film right now to what it can be in the coming years.”

Occupied VR has worked out its own VR filming pipeline to tackle things unique to VR film creation, including editing of spherical video. Last year, the studio teamed up with CFC Media Lab to take viewers inside the mind of David Cronenberg with a short VR experience for the Body/Mind/Change TIFF exhibit. Most recently, CFC and Occupied VR created a VR Lounge at Hot Docs where they premiered a series of “VR Sketches” that explore different facets of VR storytelling. The trio of sketches each illustrates some of the major storytelling tools for VR, including 3D positional audio, the use of 3D 360-degree filming and a “glimpse of the future of VR” using photo-realistic 3D scanning to transition a person from real to synthetic.

The CFC Media Lab has been a driving force behind VR in Canada – not just from a content creation perspective but also through the hardware needed to capture this content. Its IDEABOOST company Bubl Technology has developed the Bublcam camera, the first camera of its kind to capture spherical photos and videos which can be used for VR. Earlier this year, Bubl launched a smartphone app called Bubl Xplor, which features spherical images and video taken with Bublcam along with a VR mode that allows users to view the content using a smartphone-based HMDs like Google Cardboard.

Montreal’s Felix and Paul Studios has also quickly become a leader in VR content creation, creating immersive experiences in 360-degrees. Led by directors and visual artists Félix Lajeunesse and Paul Raphaël, the studio has developed an industry-leading platform for VR filming and the creation of cinematic virtual reality experiences. One of the studio’s first VR films, Strangers, creates an immersive and intimate music experience as Gear VR users are transported into the living room of Montreal singer-songwriter Patrick Watson to hang out with him as he plays music. The five-minute film debuted at SXSW 2014. Since then, Felix and Paul have continued to create extremely personal experiences for Fox Searchlight’s Wild and Cirque du Soleil which puts wearers on stage with the act.

The studio’s most recent creation is a VR experience for the blockbuster film Jurassic World, produced in collaboration with Lucasfilm’s Industrial Light and Magic and Skywalker Sound. Jurassic World: Apatosaurus gives Gear VR users the chance to explore the fictitious park and get up close and personal with a living dinosaur.

It’s this ability to explore that makes VR perfect for gaming, which is the use case Facebook’s Oculus and Sony’s Morpheus are focusing on. Game studios like Ubisoft, which has major development centres in Toronto and Montreal, are already creating VR games for platforms that will hit the faces of consumers in 2016. Ubisoft showcased three VR prototypes at E3 last month, including Eagle Fight, a multiplayer flight-sim shooter built by Ubisoft Montreal.

Many of these major gaming studios are working with Toronto’s Quantum Capture, a VR content producer that specializes in digitizing humans. Founded by two former Ubisoft employees, Quantum Capture uses over 100 cameras to scan a person in seconds to create highly detailed 3D models complete with super high resolution textures that can be used in VR. The digital scans are so real that co-founder Craig Alguire describes experiencing them in VR as “beyond immersive.” “It almost feels like you can reach out and touch them or if you get too close to their face you almost feel like you are invading their privacy,” he said. Quantum Capture is working with indie-VR game studio IRIS VR, also based in Toronto, to create life-like humans for flagship VR game TECHNOLUST. TECHNOLUST is a 1980s cyberpunk inspired adventure experience built from the ground up exclusively for virtual reality. Back in 2014, IRIS VR raised more than double its goal on Kickstarter for the game before opening pre-orders to a BETA build for the Oculus Rift to wider audience. IRIS VR recently confirmed that it will be bringing TECHNOLUST to both the Sony Morpheus and HTC Vive platforms, which are expected next year. “Virtual Reality affords great opportunity for immersive adventure, allowing the player to feel as if they are actually part of the game world,” IRIS VR explains on its website. “Gameplay in TECHNOLUST is based primarily around story driven exploration. TECHNOLUST is more than a game; it’s a living breathing place.”

Creating an immersive experience that makes you feel like you are living the game is something creative technology firm Globacore achieves in its projects by combining physical and digital elements. Globacore took the world by storm with its PaperDude VR experience which used the Oculus Rift, a Kinect and a KickR to bring the classic arcade game Paperboy to life.

This story originally appeared on our sister site, BetaKit.