The ZenWiFi mesh system costs a lot, but it’s worth every dollar if you need the coverage and Wi-Fi 6 support 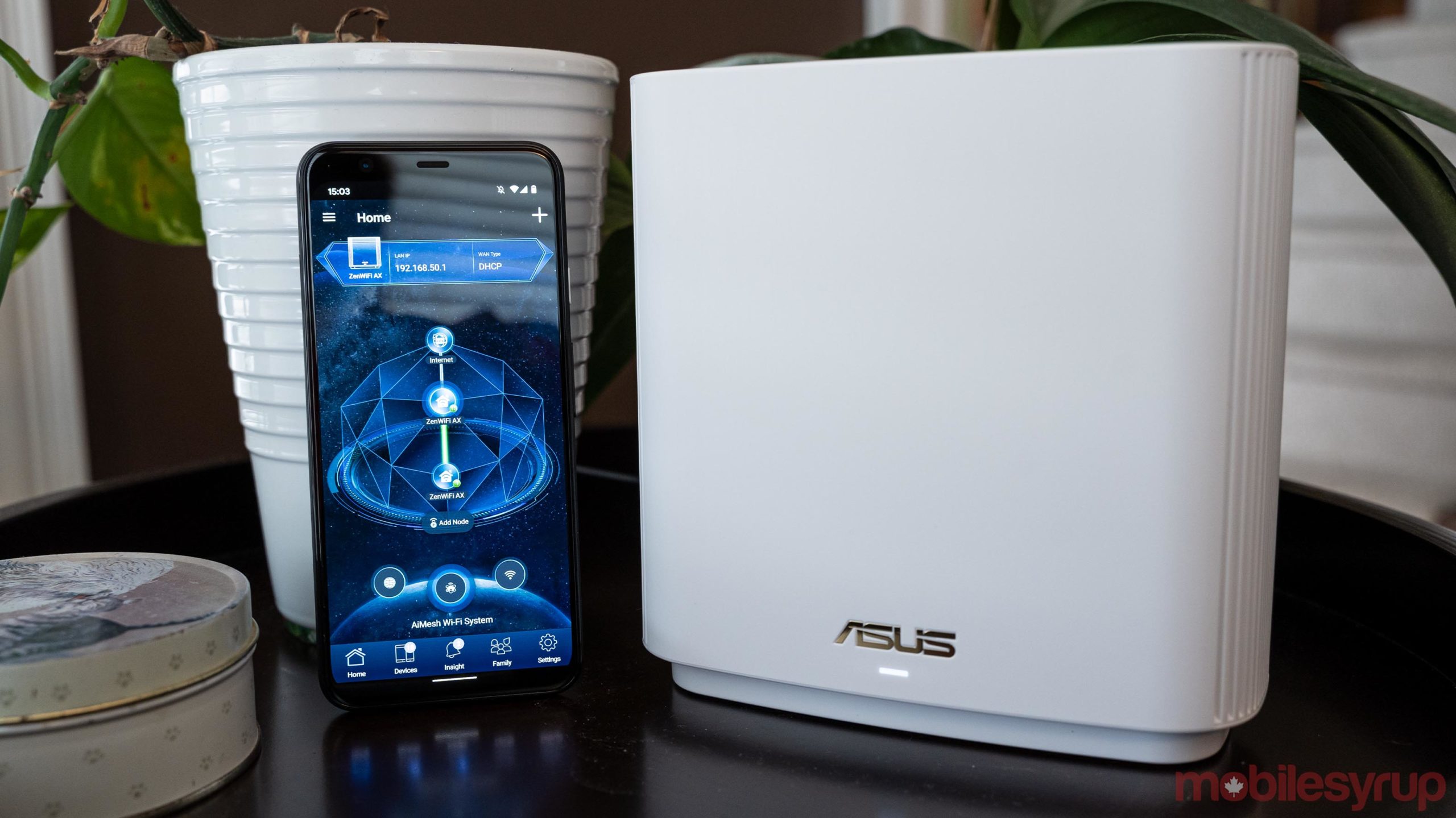 However, there’s a case to be made for buying your own router. Asus’ new ZenWiFi AX Wi-Fi 6 mesh system is the most persuasive I’ve experienced yet. 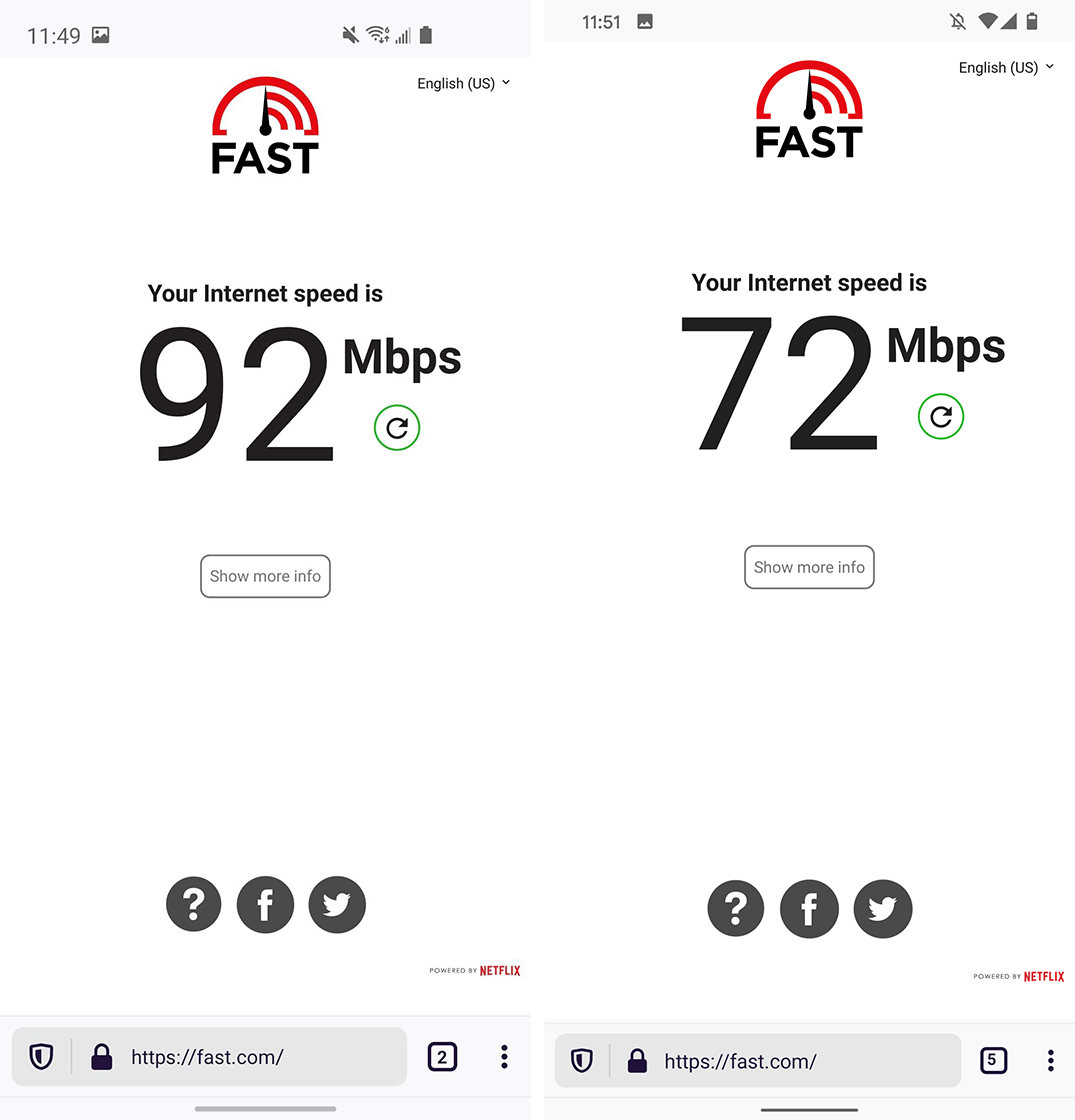 Released earlier this year and available now, the ZenWiFi is a mesh system that supports the new Wi-Fi 6 standard (802.11ax for the technical people out there). While a welcome addition, Wi-Fi 6 is more of a helpful future-proofing than a real feature of the ZenWiFi. At this point, there just aren’t enough Wi-Fi 6 devices to really take advantage of the benefits.

Even if you have a Wi-Fi 6 device, there isn’t a significant speed difference unless your internet package is really fast. In my tests on a 100Mbps package, a Galaxy S10e with Wi-Fi 6 performed just as well on the 5GHz network as a Pixel 4, which doesn’t have Wi-Fi 6. Running the same test on the 2.4GHz band revealed a small 20-30Mbps difference between the S10e and the Pixel 4, but I don’t think that’s enough of a speed bonus to justify a switch to Wi-Fi 6 on its own.

Further, Asus’ spec page for the router lists it’s Wi-fi 5 speed (802.11ac) on the 5GHz band as capping out at 867Mbps, while on Wi-Fi 6 the band caps out at 1,201Mbps. While theoretical max speeds aren’t the same as real-world results, unless you’re well over gigabit internet speeds, the Wi-Fi 6 spec likely won’t make a difference for you. 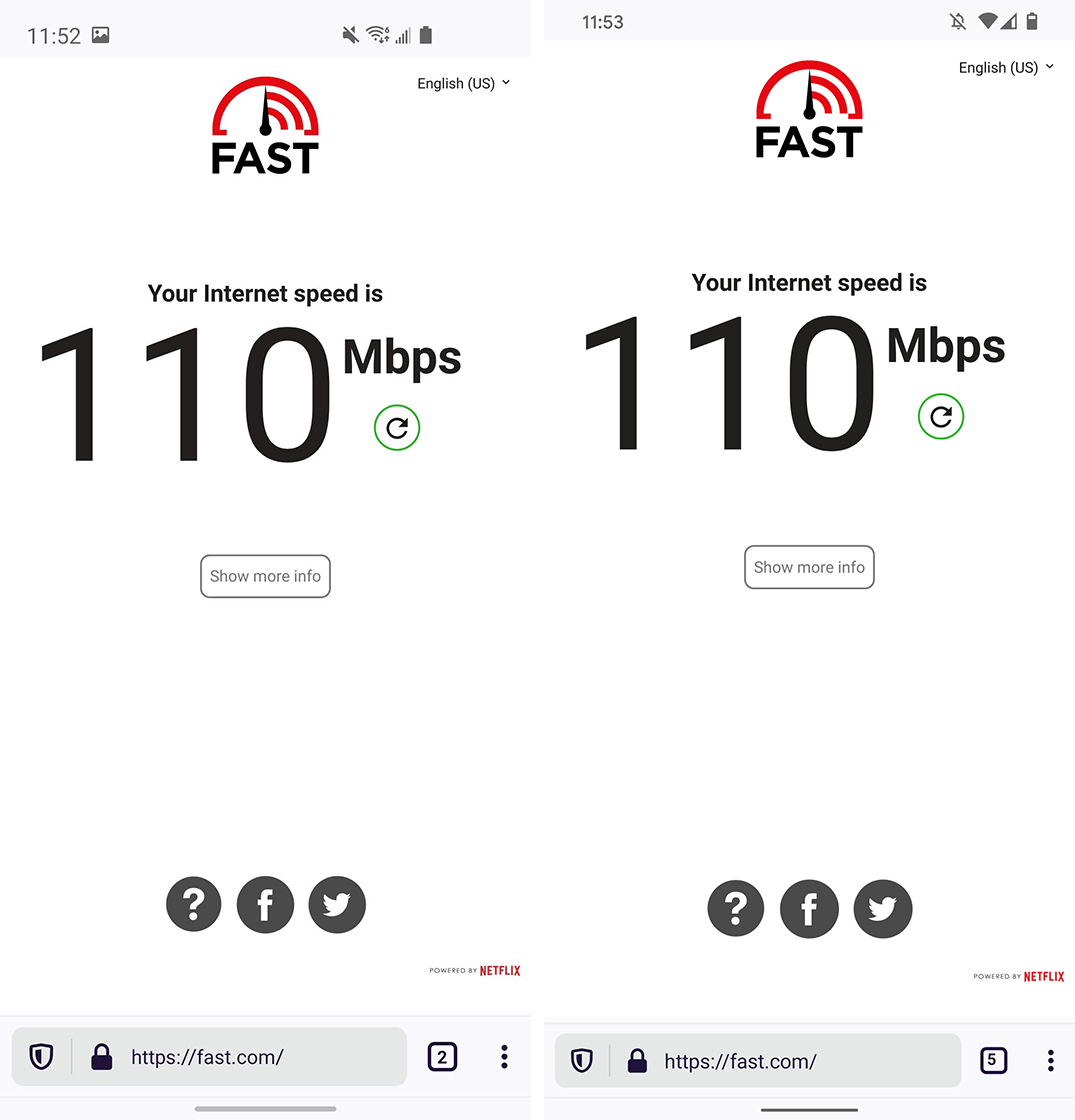 5GHz speed test showed both the S10e with Wi-Fi 6 and the Pixel 4 maxing out my internet speed.

What actually makes the ZenWiFi worth the cost is its easy setup, coverage, smarts and performance. When all these factors work together well, the ZenWiFi is nothing short of impressive.

Since the ZenWiFi boasts a wild 5,500 square foot range when using the two included access points, I decided the ultimate torture test would be to set up the system in my parents’ rather large home. It is far from ideal for Wi-Fi, especially if you want to get consistent coverage in the basement as well as the ground floor and upstairs rooms, and has proven difficult even for mesh systems I’ve tried before.

The most significant issues when setting up a Wi-Fi mesh network are the basement and the opposite side of the house from where the modem is. Thanks to the house layout, there’s a significant interference area right in the middle that, in my experience, kills signal and degrades speed. The result has always been a hard choice: place the access points to prioritize the basement or the other half of the main floor.

The ZenWiFi is the first mesh system I’ve tested that made that an easy choice.

This is because of the excellent setup process, which walks you through the placement of the second node to ensure optimal coverage and signal strength.

From start to finish, it took me about five minutes to plug in the primary access point, connect it with the smartphone app and complete the setup. It took me a bit longer to set up the second access point only because I tried it in several locations around the house to determine the optimal placement.

One of the most helpful things here was that the second access point would display different LED colours based on the quality of the signal. The app displayed the information in more detail, but the LED made it simple to walk around my house, plug in the router, check the signal quality with the LED, and move to a new location.

Dedicated backhaul is a blessing 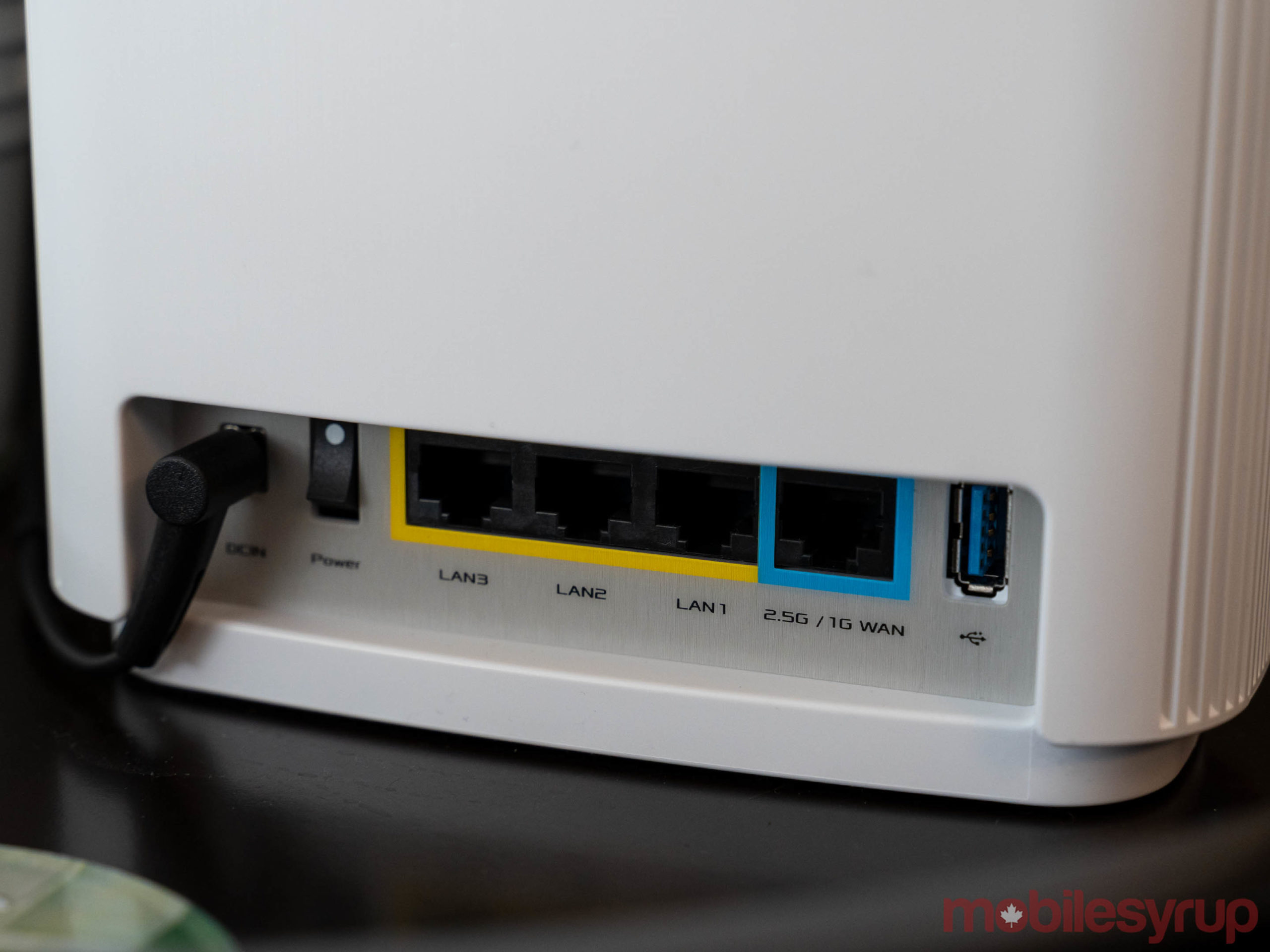 Part of why ensuring the access points maintain a solid connection is that the primary point is physically connected to the internet, while the second access point uses Wi-Fi to relay network traffic back to the primary point. However, what sets the ZenWiFi apart is that it offers a dedicated wireless backhaul for this.

While that extra speed is particularly helpful for backhaul, it’s worth noting that users can set up a wired connection between the two access points and use the faster 5GHz for Wi-Fi instead. Unfortunately, an internet package that could make use of that much higher speed doesn’t exist in Canada yet. 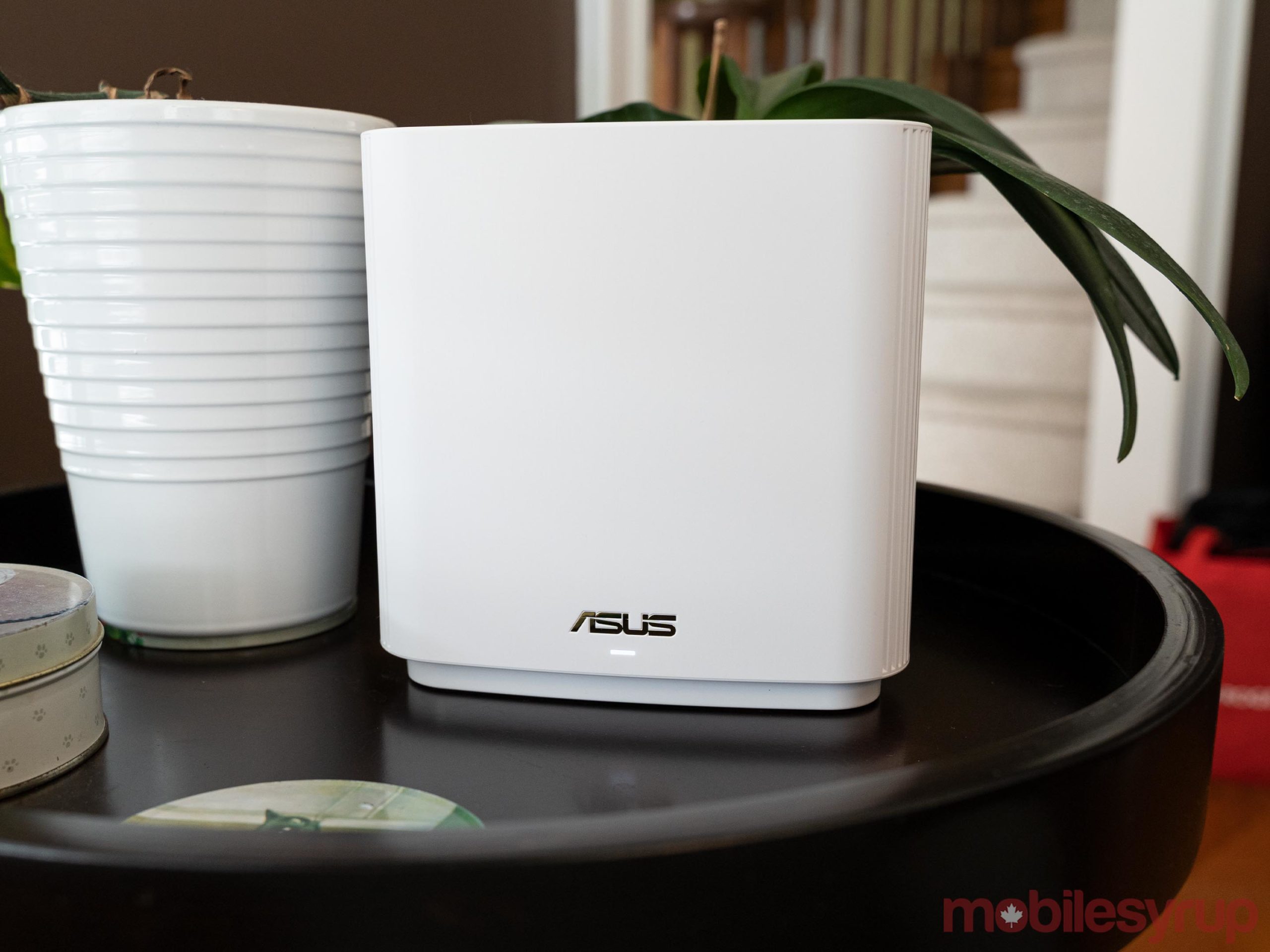 Of course, I also didn’t find I needed that speed boost. The ZenWiFi was consistently fast over the two weeks I had it set up. There was only one instance of a dropped connection that I noted, but it was only a blip on an otherwise impressive record.

Although I wasn’t able to really push the ZenWiFi to its limits due to the speed of the internet package I subscribe to, it did hold up very well in terms of performance. In almost all situations, however, I found the 2.4GHz to be slower than the 5GHz provided by the router, even though my internet package wasn’t close to hitting either bands’ speed cap.

By default, the ZenWiFi offers a unified SSID (the name of the network you connect to), which means users have one network to connect with for both 2.4GHz and 5GHz. Then, the router determines the appropriate connection band for each device. Asus calls this ‘Smart Connect’ in the app.

Ultimately, it’s up to you whether to use it. I turned it off as I like to be able to manage which band my devices connect to and because some of my smart lights don’t play nice with 5GHz.

Considering the variety of obstructions in my test environment, which typically cause Wi-Fi issues, the ZenWiFi had incredible coverage and high-speeds even at the fringe of coverage areas.

Additionally, I found it handles a large number of smart devices well. Other routers I’ve tested frequently kicked things like Google Home speakers off the network when there was a lot of traffic, but the ZenWiFi never did that. 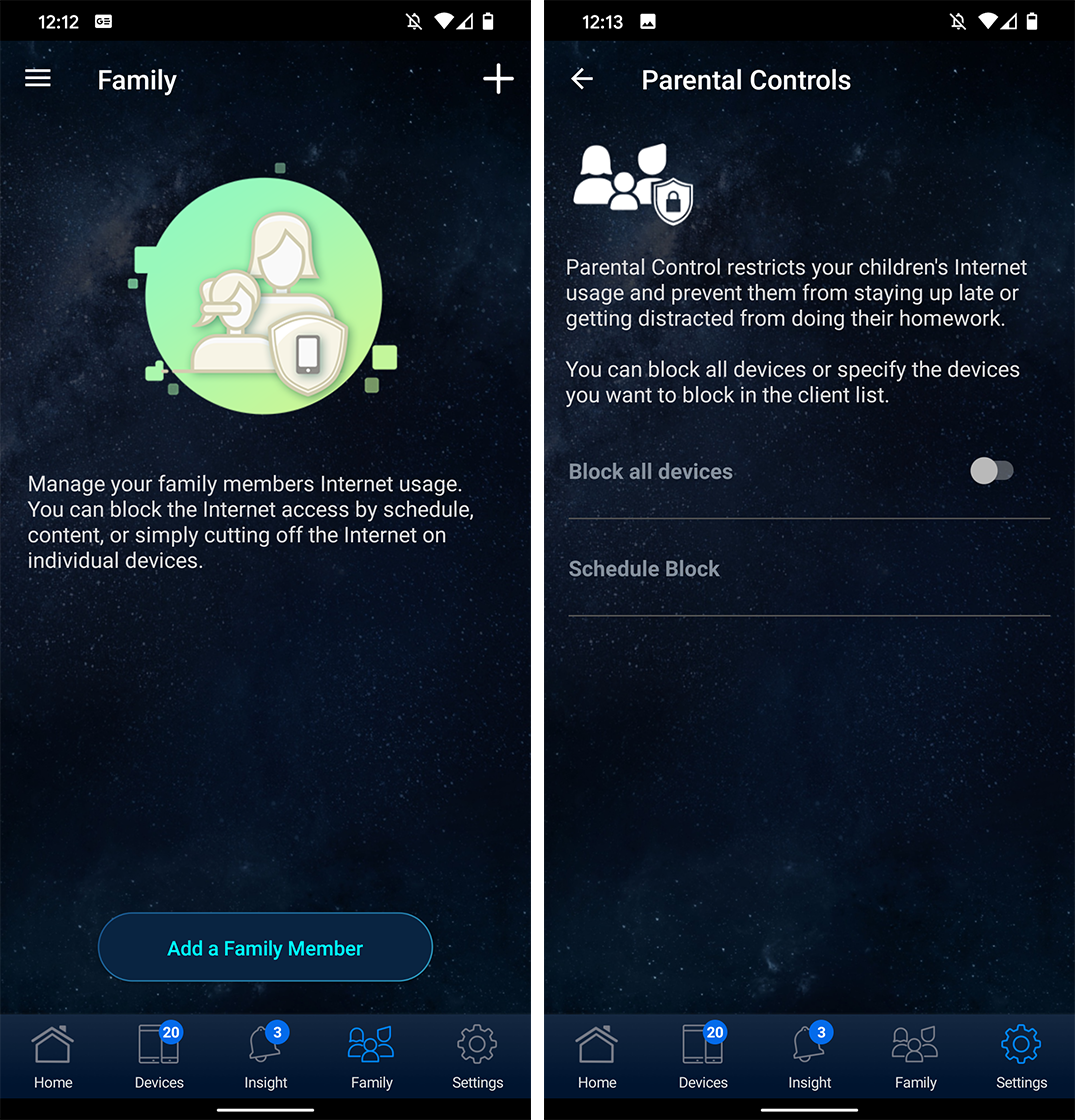 Finally, the ZenWiFi offers several ‘smart’ features through the app that could be a difference-maker for some, but maybe a turn-off for others.

AiProtection is a security measure that monitors your internet traffic and blocks malicious sites, infected devices and other potential security issues. Further, it displays a handy tally of blocked items in the Asus Router app.

When running, the router will display a warning message to users when they visit a malicious website.

The QoS engine is a more interesting addition, allowing users to set up a bandwidth limiter or create QoS profiles to prioritize specific applications such as gaming, media streaming or other online tasks. 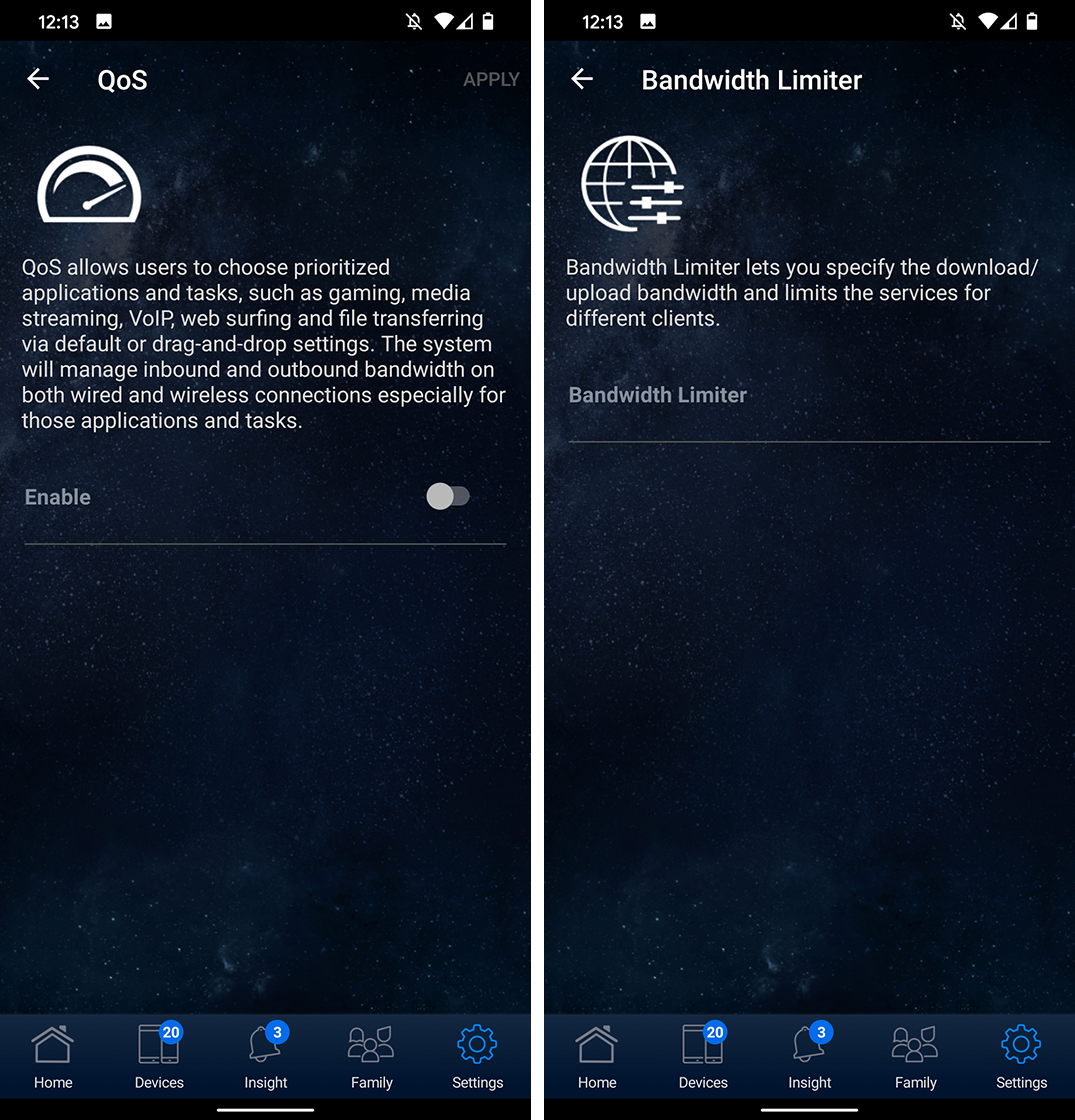 QoS could prove helpful in ensuring the things you often do on your network always work well. For example, you could set up priority for Netflix so that when you’re watching a movie, it always streams well even during high-traffic periods.

Unfortunately, to use these features, you’ll need to agree to the terms and conditions for third-party company Trend Micro, which runs the software that powers these features.

Those terms and conditions come in the form of lengthy documents (some of which link you to other lengthy documents). In short, it all means that Trend Micro hoovers up a bunch of your data, including sensitive data — although the company claims it only looks for data like the router ID to ensure the licence is valid. Coupled with a vague privacy policy, it’s frustrating to know using these features means my sensitive data ends up in the hands of Trend Micro, whether the company uses it or not. 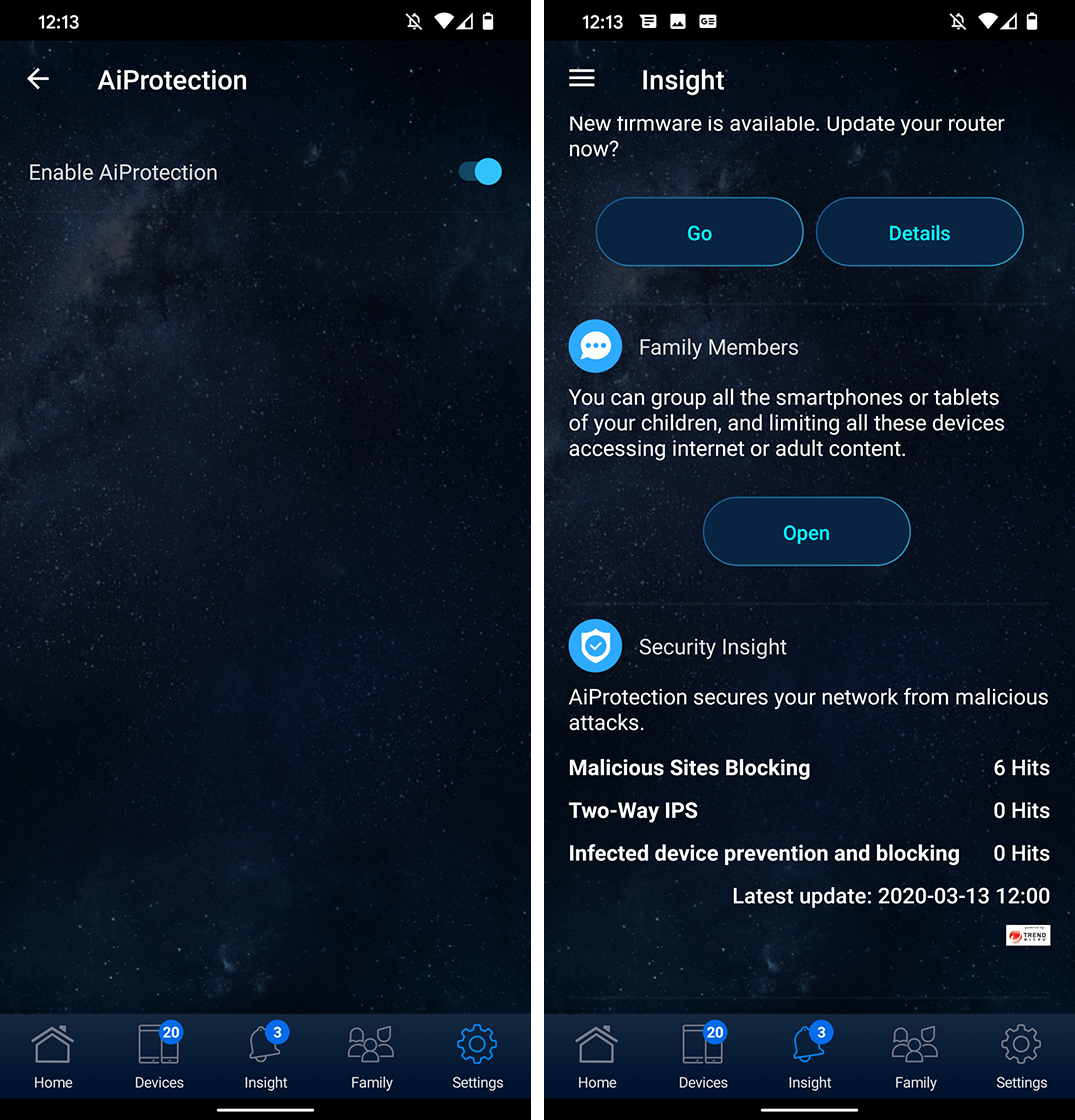 Thankfully, the QoS service and AiProtection are altogether unnecessary services and, as soon as you try to turn them on, Asus does warn you about the privacy implications. Ultimately, you shouldn’t need any of this stuff to enjoy the speedy Wi-Fi provided by the ZenWiFi, and I’d recommend not turning them on unless you’ve read through all the documents and feel comfortable with the privacy implications.

ZenWiFi is well worth the price

The Asus ZenWiFi AX gets nearly everything right. From excellent performance to solid coverage, if you need high-end Wi-Fi in your home, the ZenWiFi delivers.

However, Asus also attached a large price tag to the mesh system in Canada. Available at Canada Computers, you’ll be putting down $619 for the ZenWifi two-pack.

It’s more than what you’d have to pay for similarly specced mesh systems in Canada — most tri-bands I found are in the $500 range, but lack Wi-Fi 6 support and don’t offer as much coverage as the ZenWiFi. It’s also more than the $459 Nest Wifi router with two points, which should cover up to 5,400 square feet, just shy of matching the ZenWiFi’s 5,500 range.

Plus, most ISPs provide a modem/router combo with an internet package and include the rental cost in the monthly price. In other words, you’ll be paying for a Wi-Fi router from the ISP as well as the Asus system should you choose to buy one. Ultimately, if you don’t need the immense coverage or the Wi-Fi 6 support, the ZenWiFi will be a tough sell.

If you do put out the money for a ZenWiFi system, however, you won’t be disappointed.