They aren’t cheap, but the price is fair for the quality 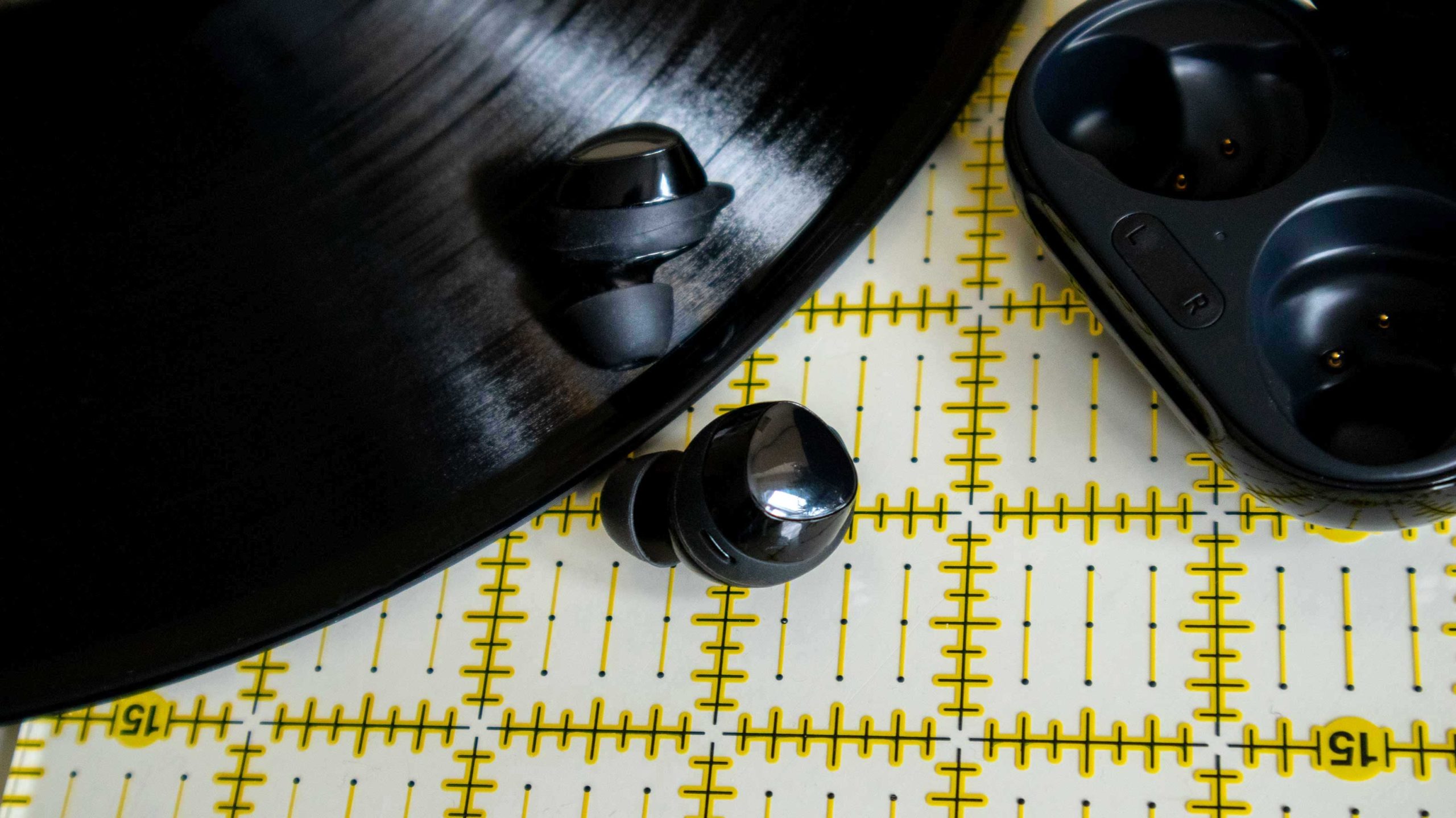 Alongside the Galaxy S20 series and the new Galaxy Z Flip, Samsung also updated its wireless earbuds with the Galaxy Buds+. This time the company focused on battery life and sound quality improvements, and it paid off.

Also, the new ‘Cloud blue’ colour is a better addition than last year’s yellow variant, but there’s a lot more to love about these buds than just a new colour. 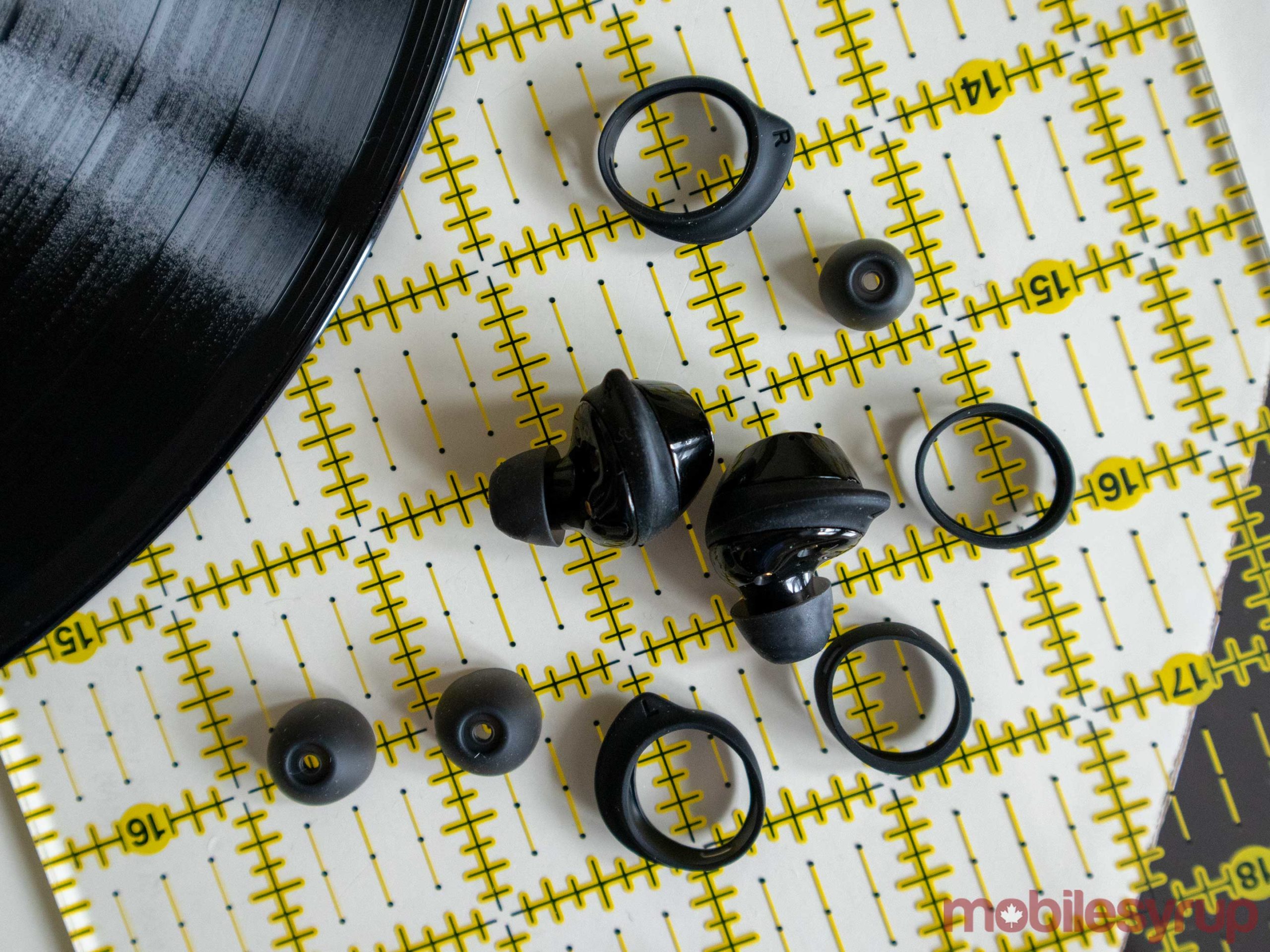 If you’ve used any wireless earbuds from Samsung in the past, you know what the Galaxy Buds+ look like.

Each tiny earbud has a touch-sensitive pad and a small rubber fin. I think this small size is a massive plus for the wireless earbuds since it makes them light and portable. On the inside, there are two metal contacts that allow them to slot into their tiny charging case and power up.

Speaking of the charging case, it’s also quite tiny and fits nicely in my pocket. It’s the same wireless charging case as last year, but this time around, it has a glossy finish instead of a matte one. The glossy version gets greasy pretty quickly, but from a distance, I like the look of it more than the 2019 model.

Samsung says when the case and the earbuds are combined, the battery can last for 22 hours and the buds themselves are capable of making it to 11 hours, which is phenomenal. Samsung does include a fast charging feature that will get you an additional hour of playback in around three minutes, but they need to be physically plugged into a powerful charging brick.

That said, I didn’t find I needed to fast charge. As long as you make sure your earbuds are in the case when they’re not in use, you should be good. However, for long days where you need to use headphones a lot, the extra boost you can get with the fast-charge tech is handy to have. In my time with the Galaxy Buds+ I generally used them for about two to five hours a day while commuting and at work. 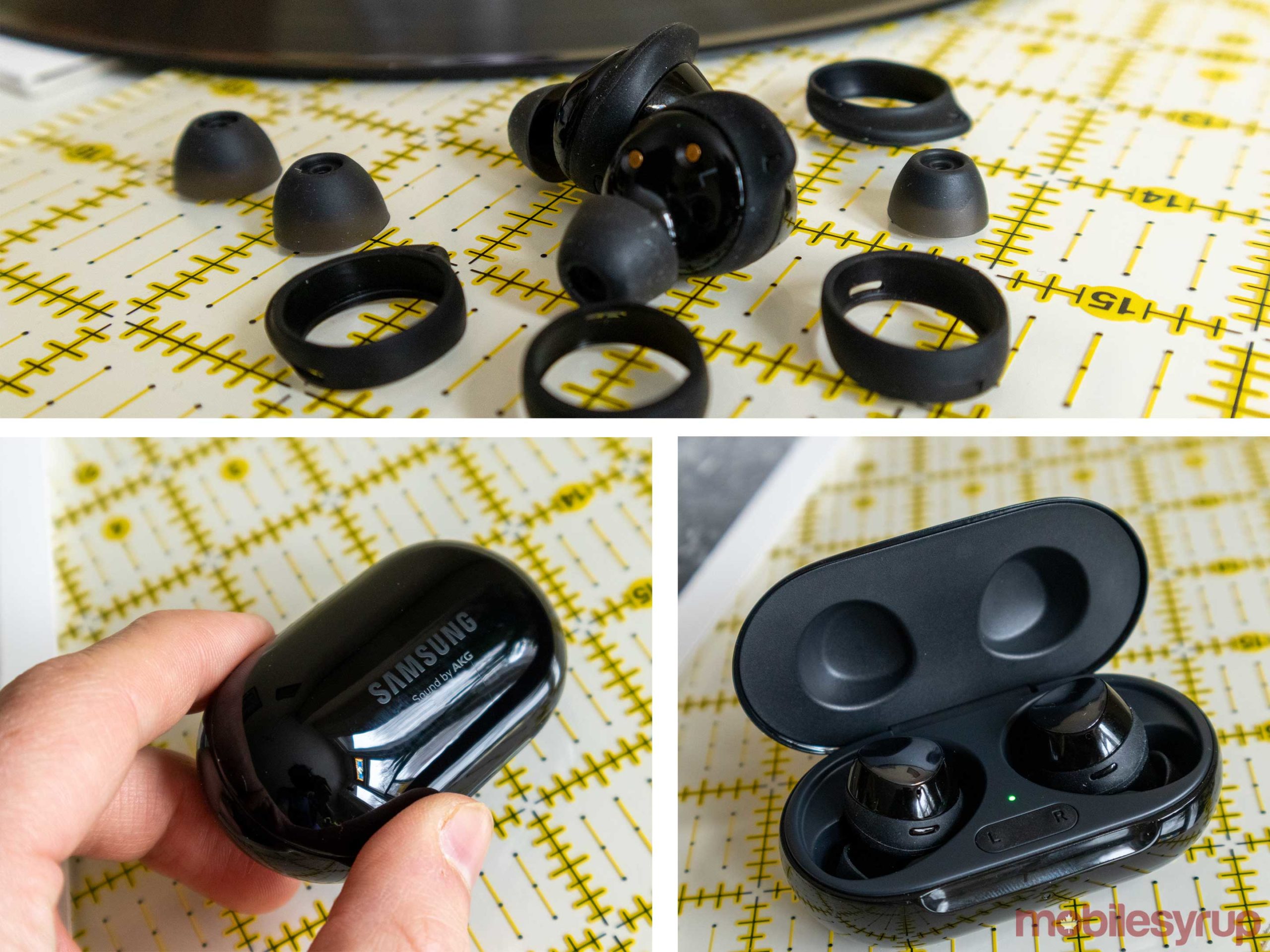 With Android, the Bluetooth quick toggle shows the Buds’ battery life. Alternatively, you can also download the Samsung Wear app to see the battery life. If you have the headphones in the charging case and the lid is open, you can see how much battery is left in the case, too. The app is also available on iOS.

The only other way to find out the case’s battery life is the small light on the front. If it’s green, the battery is between 100 percent and 60 percent. If it’s yellow, it’s between 59 and 30 percent, and then it turns red when battery life drops below 29 percent.

The main pain points with the Buds+ is that they aren’t very comfortable, and I’ll explain my specific irritation. Since the earbuds use a two-tier seal to help block outside sound, the second seal fits snugly into your ear and after a few hours, it starts to get a little sore. That said, I only experienced this after roughly three and a half hours of straight use, and after a small break, I was fine again.

My experience with the hardware and design of the Galaxy Buds+ is overall very positive. They last for a long time, and since they support wireless charging, I find that they never really run out of battery. When it comes to wireless headphones, they’re only useful to you if the battery isn’t dead, and since the Galaxy buds+ are almost always alive, they’re super useful.

A step up in sound 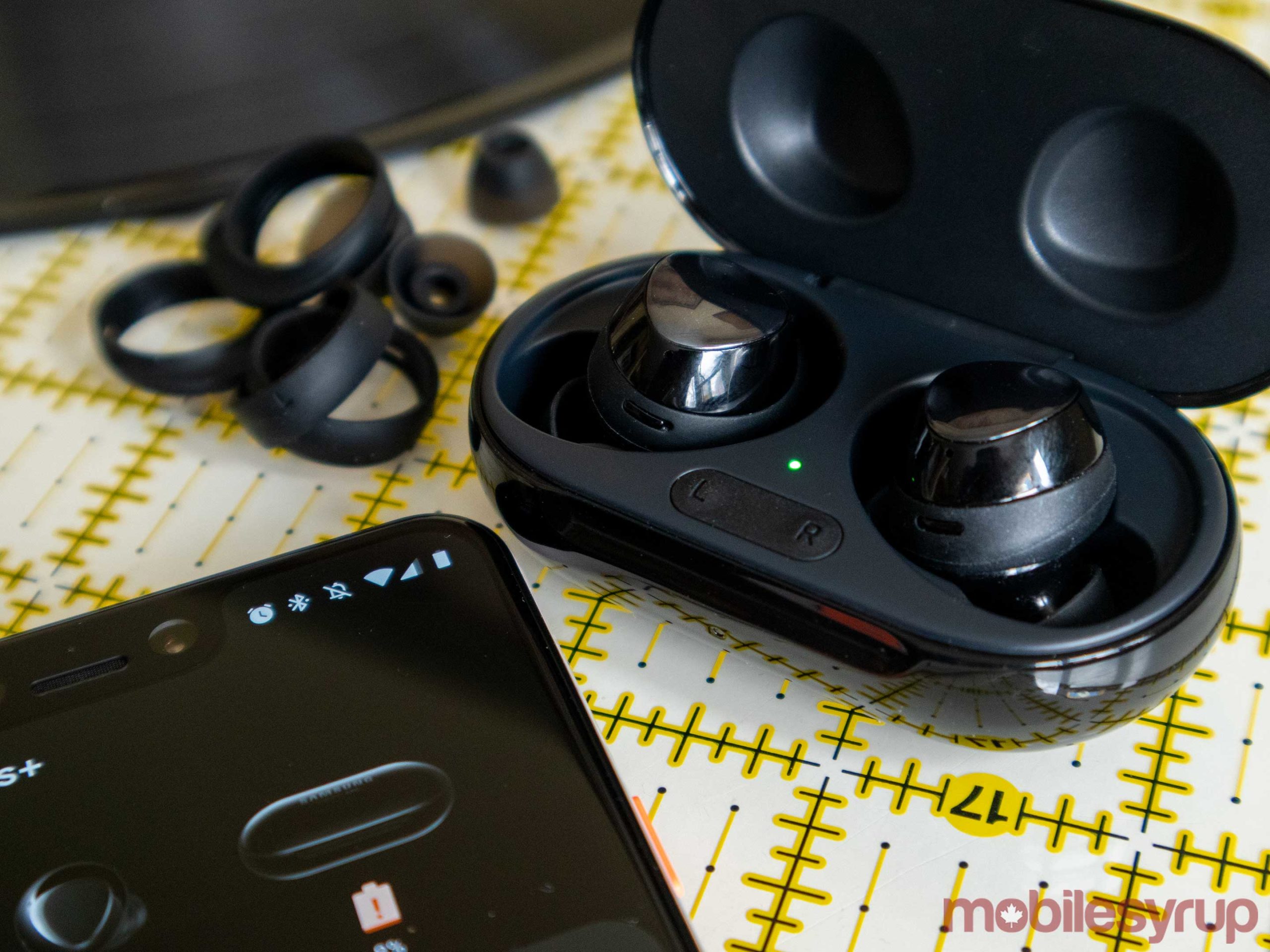 Sound quality is the other area where the Galaxy Buds+ excel. This year Samsung added a second speaker to the headphones to help add additional range and balance to the Galaxy Buds+. There’s now a woofer that brings more bass to the equation, and it sounds great.

Compared to the Rimor Tanya low-cost headphones I wrote about a few weeks ago, the Galaxy Buds+ sound phenomenal. Music is balanced, although perhaps a little bass-heavy. That said, many headphones feature too much bass and it’s not incredibly noticeable. You can use a few preset EQ settings in the Galaxy Wear app to balance this out or tune the headphones to your preference.

There’s also no active noise cancellation like Apple’s AirPods Pro or Sony’s WF-1000XM3s, but the two-tiered rubber seal does help block out a lot of noise. When you have the earphones in and no audio playing, you can hear a little bit of outside noise. I’d say any time that you have the volume turned up to at least half you can’t hear outside noise at all.

Overall, I’m slowly falling for these little headphones, and their sound and convenience are making me use them a lot more than the Bose Noise Cancelling 700 over-ear headphones that I used to love. 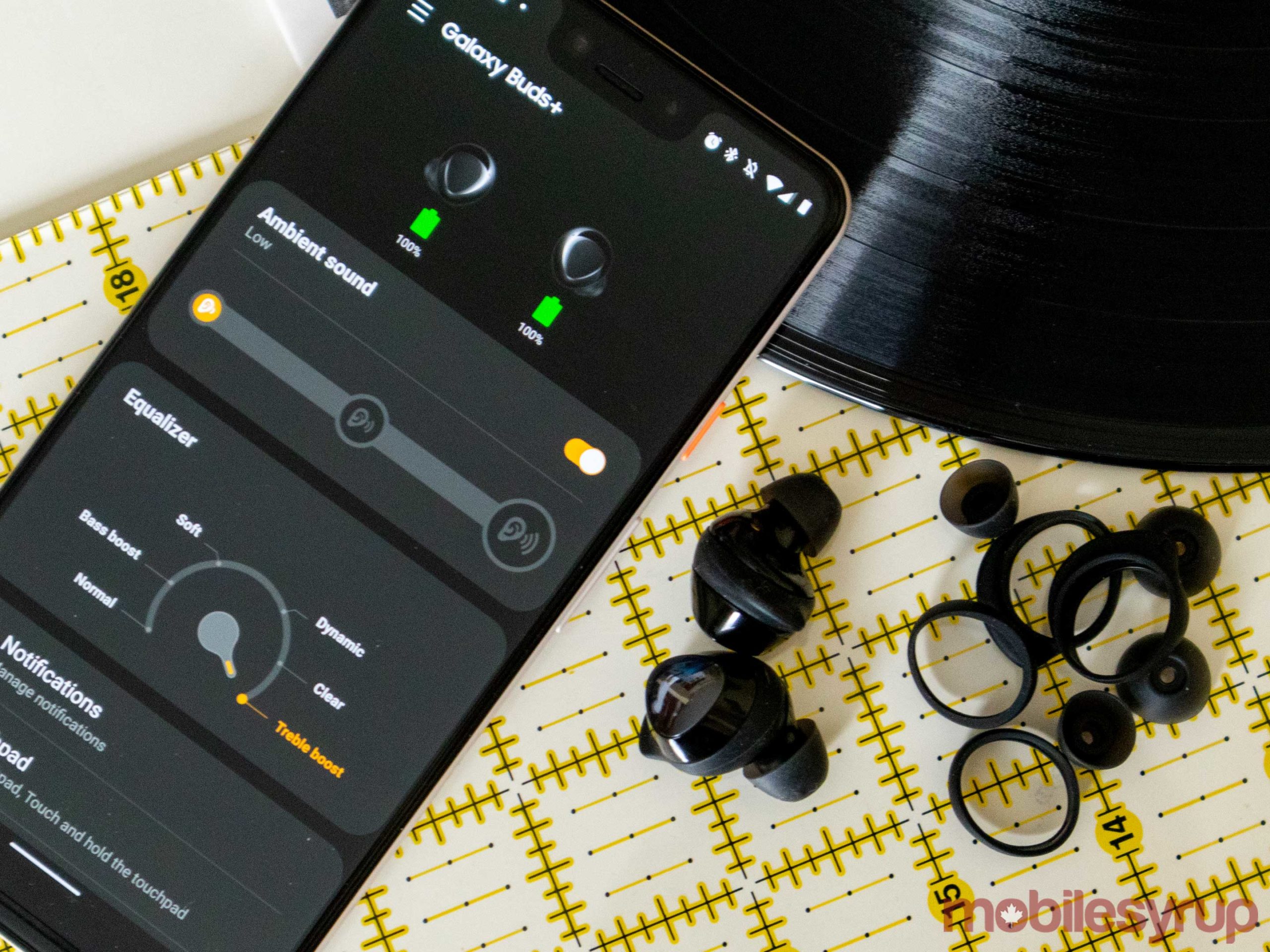 There are also a handful of other features included with the Galaxy Buds+.

First up ‘Ambient sound’ is back again. There are three levels to this feature and the higher the level, the more background noise you hear. You can only enable this feature in the Galaxy Wear app. You can also set the app so you can touch and hold on one of the touchpads to enable Ambient Sound.

A few other commands can also be mapped to the touch and hold command. You can either trigger your digital assistant, quickly start Spotify, toggle Ambient sound or turn the volume down.

The classic headphone controls are also mapped to the touchpads. That means a single tap for play/pause controls, a double-tap to skip forward or answer a call, and finally, a triple tap to play the previous track.

Another cool feature is a ‘Find My Earbuds’ toggle in the app. If you’re connected via Bluetooth, but you can’t find your headphones, you can trigger this and the two buds will start chirping.

If you have a few Samsung devices, you should be able to seamlessly switch between them with the Galaxy Buds+ as well. 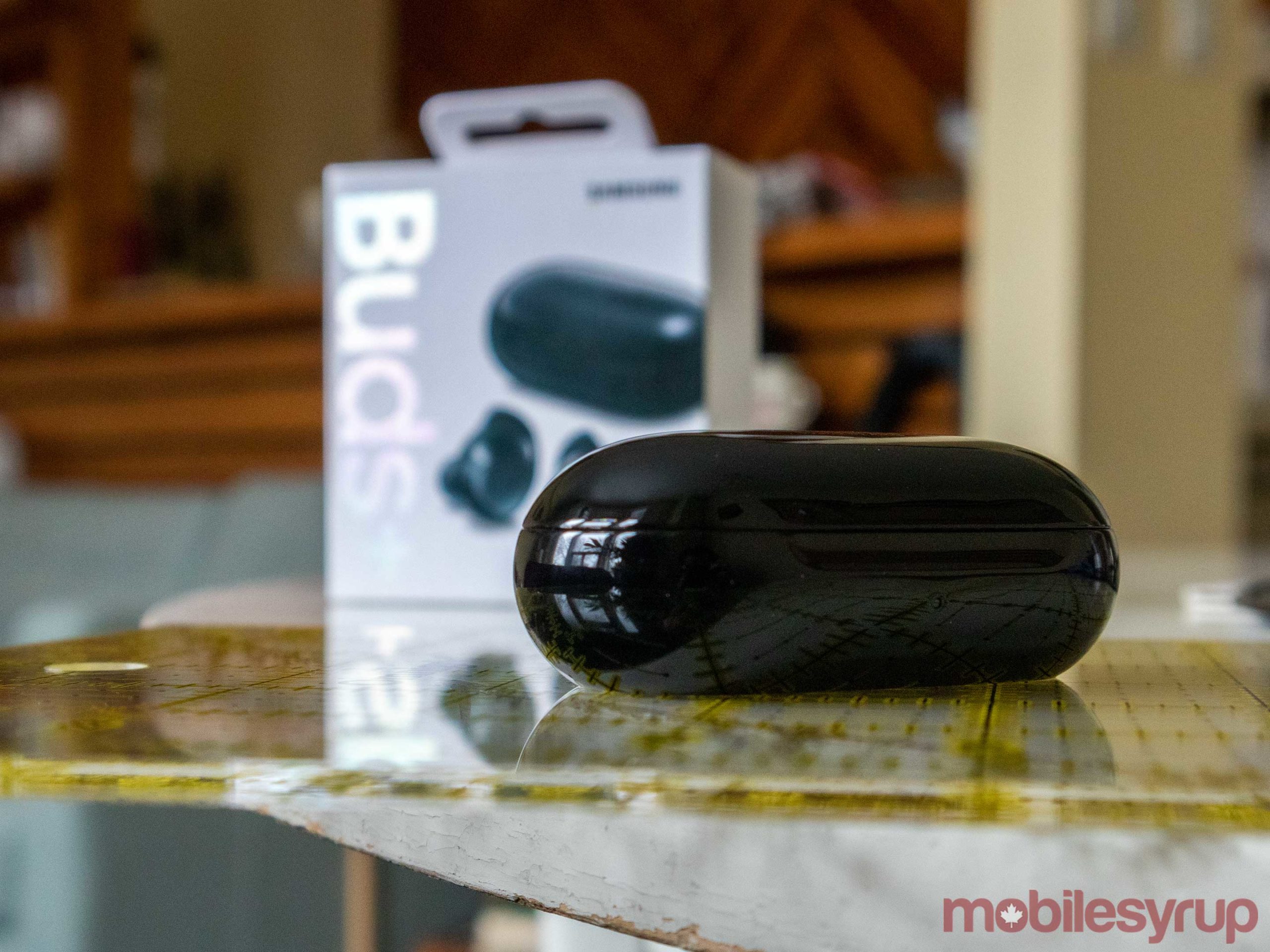 Should you buy them?

As it stands, the Galaxy Buds+ are one of the best sets of wireless earbuds currently available. The sound quality is great and the battery life is even better. If you have a wireless charger at work as well, then you’ll likely be in the same boat as me and I rarely had the headphones die.

Beyond that, they’re very tiny and the case is small too, so it doesn’t take up a lot of valuable pocket real estate. While they’re not the most comfortable headphones in the world the rest of the positives outweigh this for me, and they might even fit more comfortably into other people’s ears.

I rate the Galaxy Buds+ among my favourite pair of headphones ever since they never really died on me and the sound quality was great. To help this, the headphones only cost $199 in Canada, which stacks them up against the original AirPods and they easily blow them out of the water.