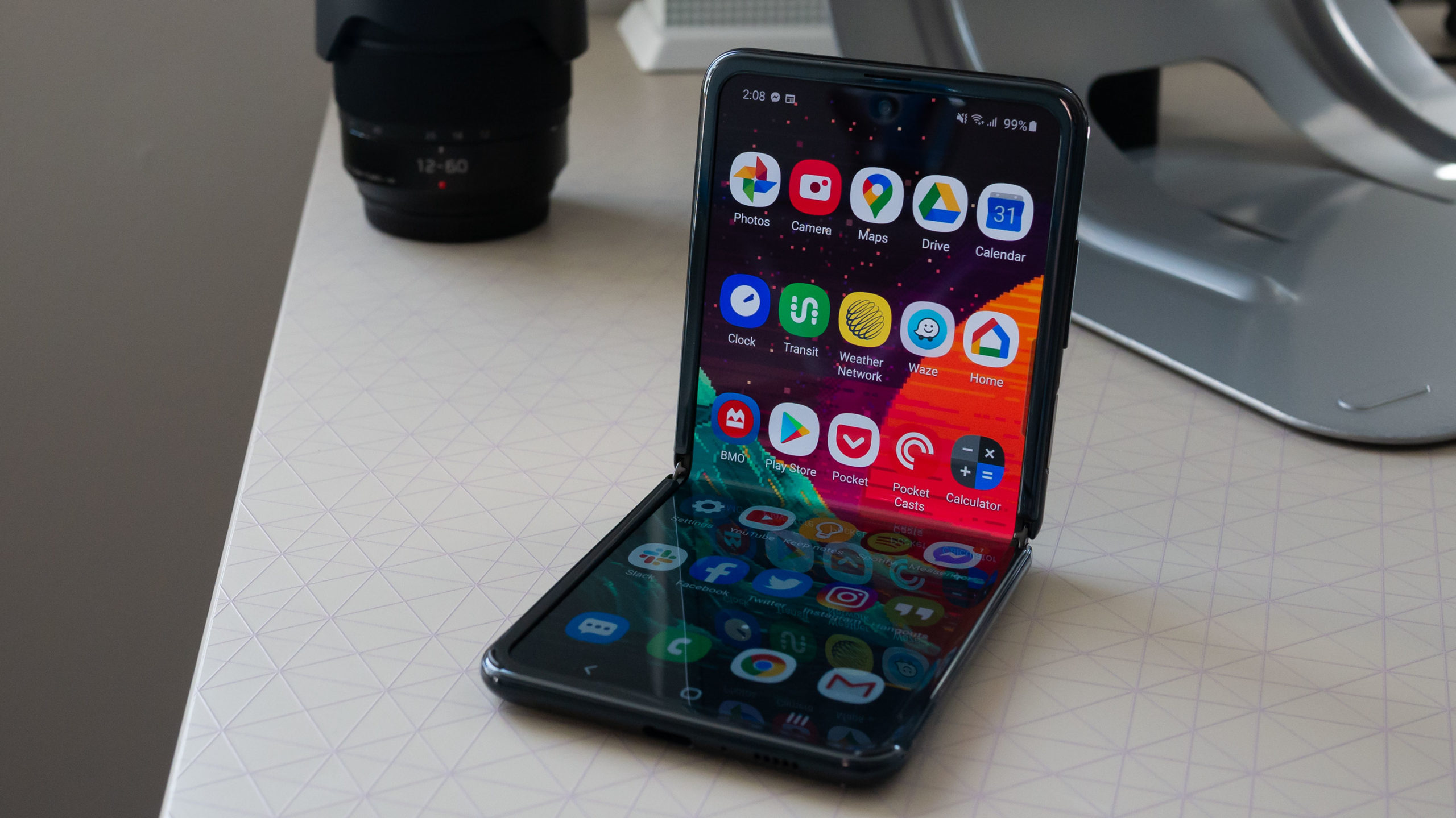 My main takeaway from the roughly 72 hours I spent with Samsung’s Galaxy Z Flip is that it’s by far the best foldable smartphone available, but in some ways, it still feels like an experiment.

If you’re sold on the concept of a foldable screen and the device’s steep cost isn’t a concern, the Galaxy Z Flip is an experiment actually worth purchasing as long as you know what you’re getting into. This is in stark contrast to the Galaxy Fold, Motorola’s Razr and arguably even Huawei’s Mate X (which didn’t release in Canada).

Unlike past foldable devices, the Z Flip includes nearly all the features expected from a modern flagship smartphone, with its only significant compromise being the lack of IP68 water resistance.

The most impressive innovation is the Z Flip’s 6.7-inch ‘Ultra-Thin Glass’ (UTG) display, which some reports indicate might not be entirely all-glass because of a built-in screen protector. The UTG screen feels nearly as solid as a standard smartphone display, though there is slightly more give to it when pressing firmly.

Further, even though it folds, the screen is still bright and features vibrant colours. This is a significant improvement over the blurry film that plagued the Galaxy Fold’s soft, plastic display. I wouldn’t go so far as to say that the screen quality rivals the S10’s or iPhone 11 Pro Max’s, but it doesn’t look noticeably bad in any way.

Regardless of how the display looks, however, I still have concerns about its durability. Since the GameBoy Advance SP-like Galaxy Z Flip folds inwards, its screen is sandwiched together when the device is closed. 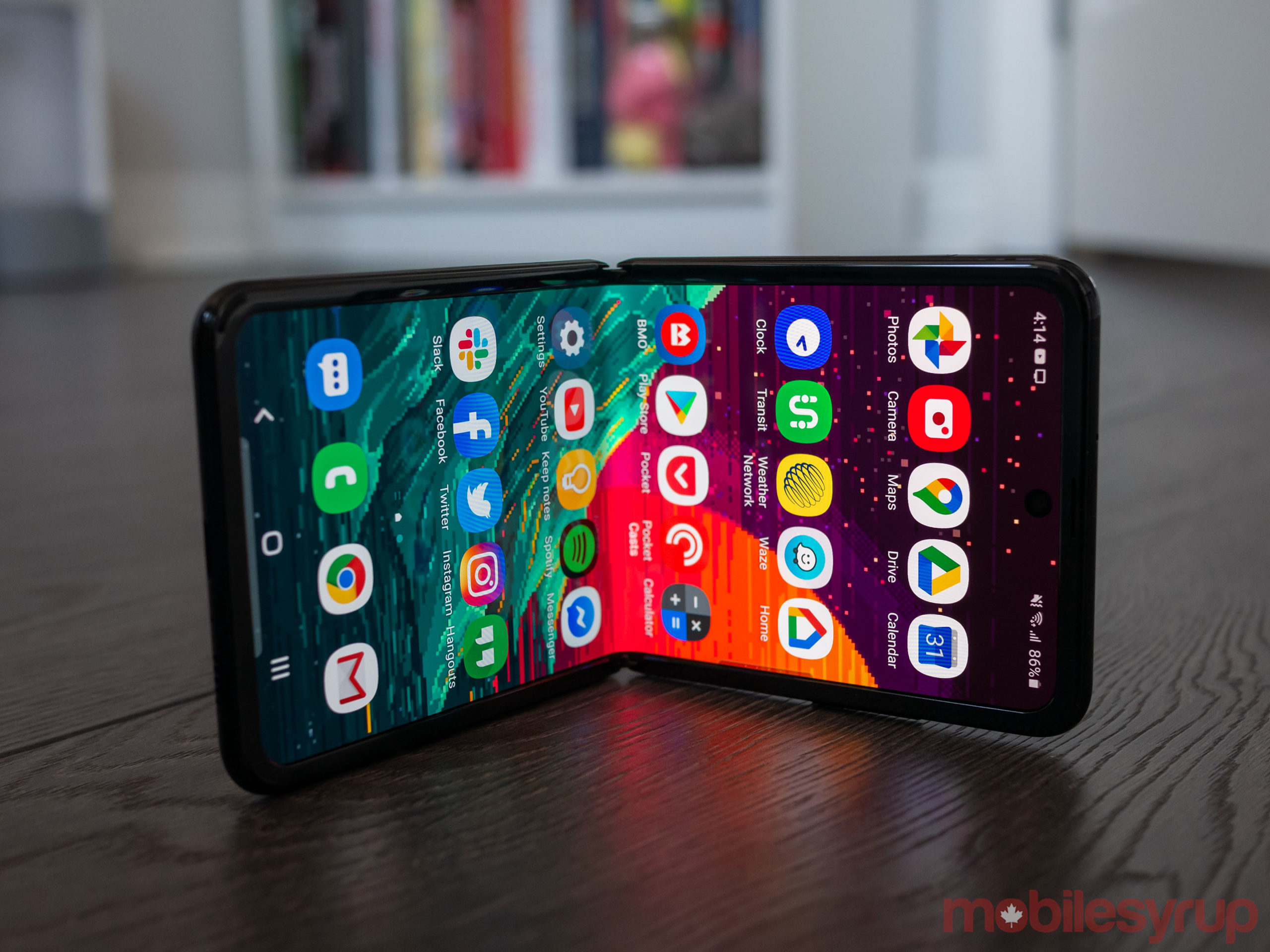 This results in the Z Flip becoming thicker, and also makes it possible for debris to get caught between both halves of the display that could cause scratches and scuffs. I didn’t end up getting any scratches on the Z Flip during my brief time with the device, but that doesn’t mean it couldn’t happen in the future. After all, I only spent three days with the smartphone.

Even the Z Flip’s hinge feels impressively solid. I spent much of my roughly three days with the device repeatedly flipping it open and close, in several instances forcefully with a single hand while grocery shopping (much to my partner’s secondhand embarrassment). That said, I can’t speak to how the display will hold up after months and years of continued folding. 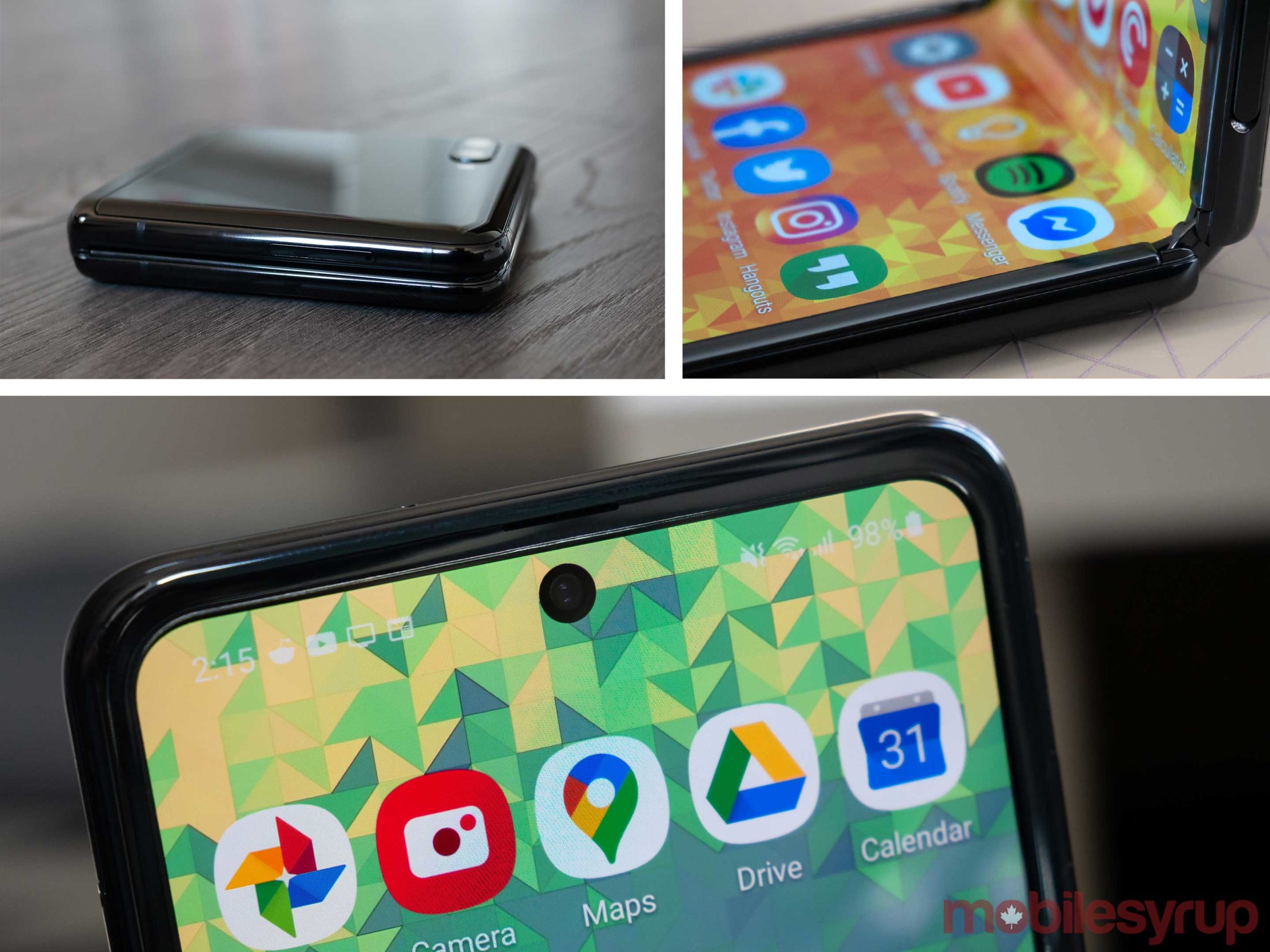 Still, at least initially, the Z Flip’s mechanism is a noticeable improvement over Galaxy Fold’s sometimes rickety hinge. The addition of brushes inside the hinge should also, in theory, prevent dust and debris from getting under the folded part of the display, unlike the Galaxy Fold.

Performance-wise, the Z Flip was capable of smoothly running any game or app I threw at it thanks to Qualcomm’s Snapdragon 855+ processor and the phone’s sizeable 8GB of RAM. It’s worth noting that when running a more resource-intensive game, the Flip does tend to get hot.

The smartphone’s cameras also snap decent photos since the Z Flip includes nearly the same array as the Galaxy S10. Of course, this also means that the shooters feature the same limitations, including less than stellar low-light performance and images that, at times, look overprocessed. 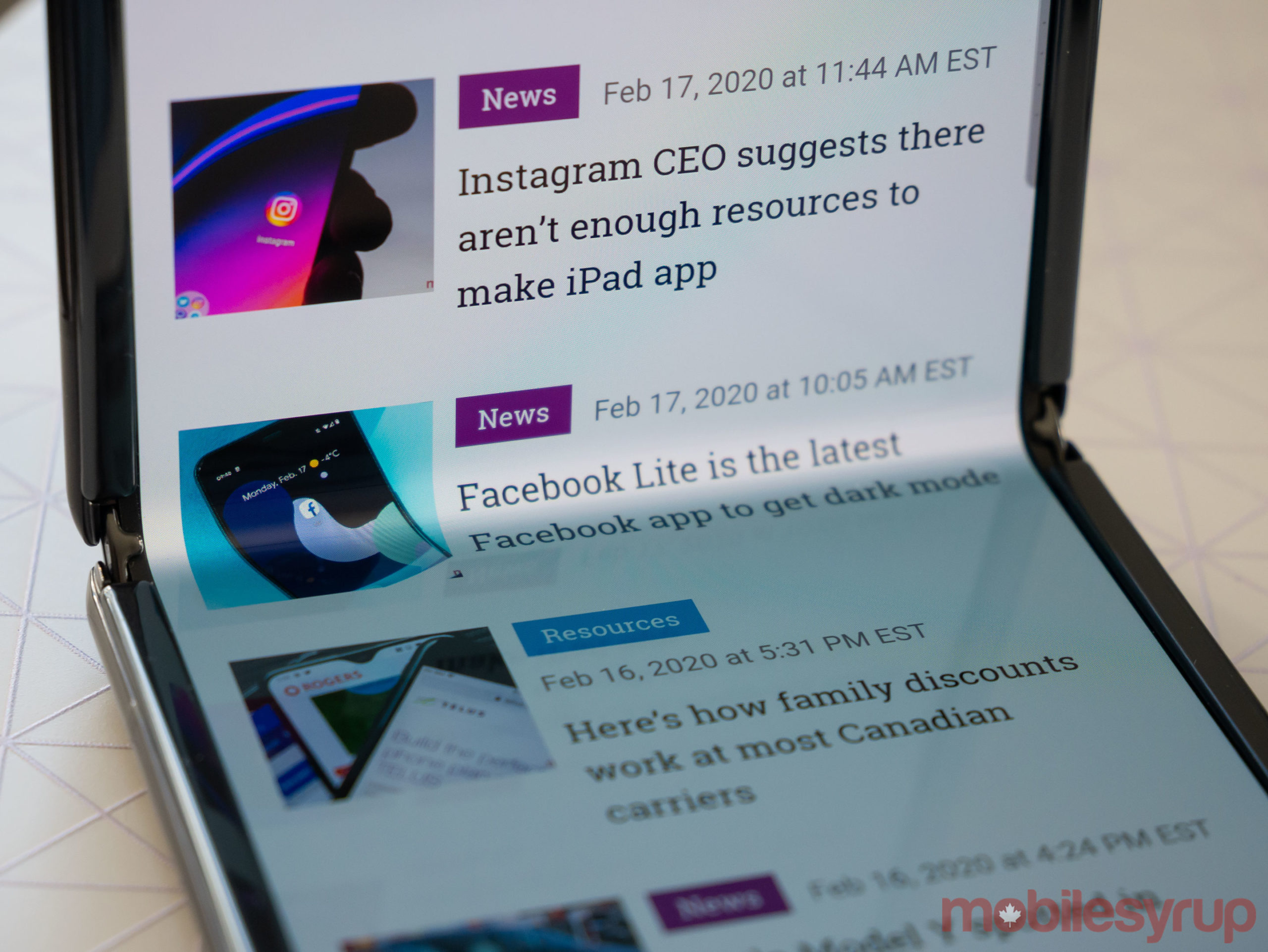 There are other issues, too.

For one, the Z Flip features the same glossy, mirror-like finish as the Galaxy S20 series. This means that the phone is a dust, grease and fingerprint magnet. It’s also surprisingly slippery when holding it in your hand and even when the phone is sitting on a surface folded. A few times the Z Flip slowly slid across my desk like it was on an air hockey table, though luckily I was always able to grab it in time before it fell. I would have preferred a matte rear finish similar to the ‘Clearly White’ and ‘Oh So Orange’ Pixel 4, or even the iPhone 11 Pro and Pro Max.

However, I appreciate that the Galaxy Z Flip comes with a surprisingly decent case that helps prevent dust and smudges, though it doesn’t completely solve the issue. 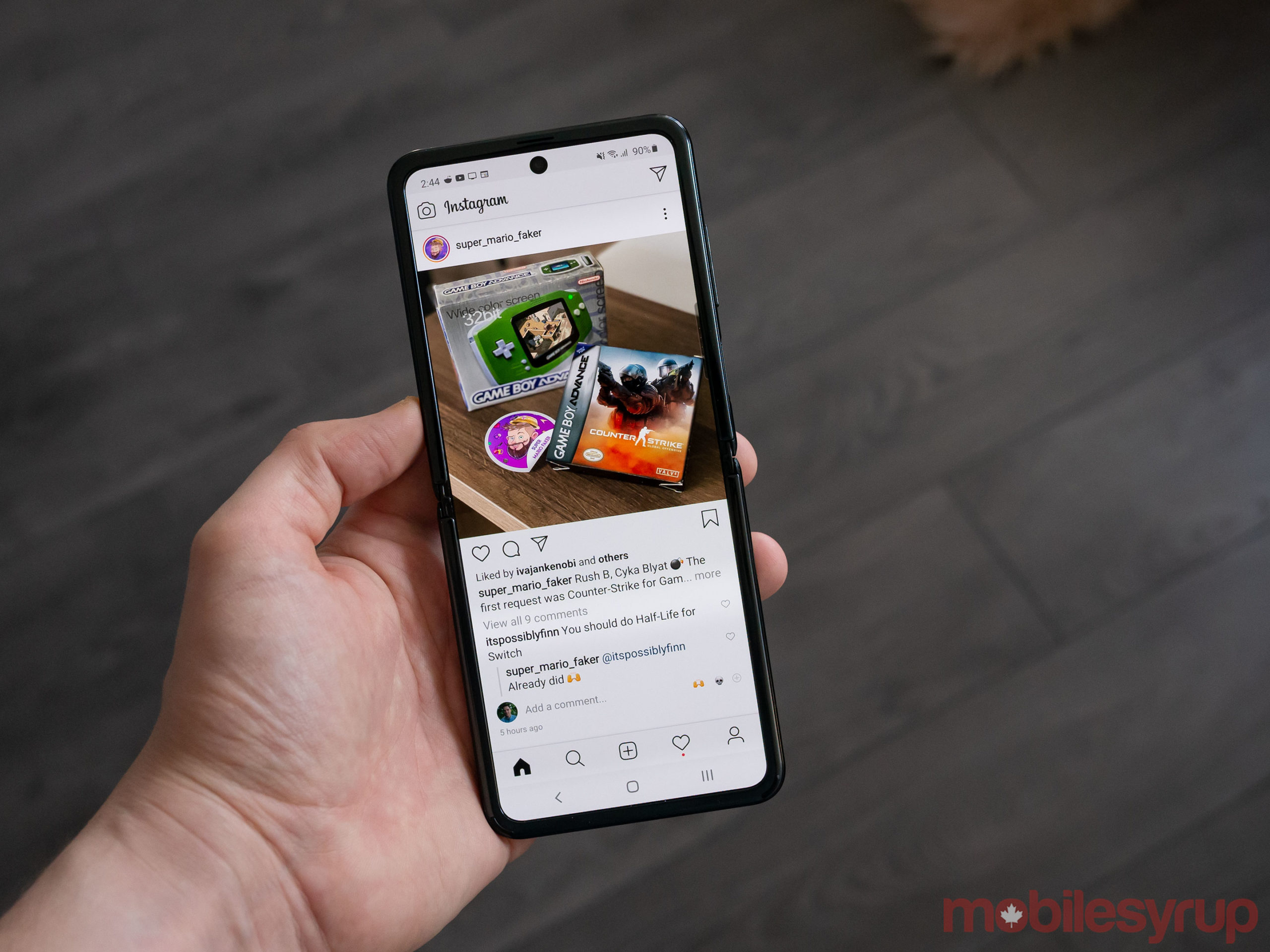 The smartphone is also top-weighted, which makes it difficult to hold with one hand. While the Z Flip didn’t tumble out of my hand during my time with the device, one-handed typing was more difficult than I expected, in part because of its tall 21.9:9 aspect ratio. In fact, I found it difficult even to reach the top half of the phone’s screen when holding it with a single hand.

The outer rear display also isn’t quite as useful as it could be because it’s extremely small. It’s great for viewing notifications and the time at a glance, but is challenging to use as a viewfinder when snapping selfies with the Z Flip’s main camera. In this respect, the Razr has an advantage because of its larger front screen.

Foldable smartphones still don’t have a reason to exist

Most importantly, despite the improvements over the Fold, the Z Flip still doesn’t answer one of the most pervasive issues surrounding foldable devices: why does a smartphone even need to fold? Sure, it’s cool, but beyond that, what’s the practical reason for folding? Unfortunately, I don’t think the Z Flip has entirely answered this question.

The ability to fold and lock at a 90-degree angle to snap selfies without needing to hold the phone is a compelling feature and a great start. Then there’s the interesting ‘Flex Mode,’ functionality that allows the Z Flip’s foldable screen to split specific app user interfaces into two distinct parts. 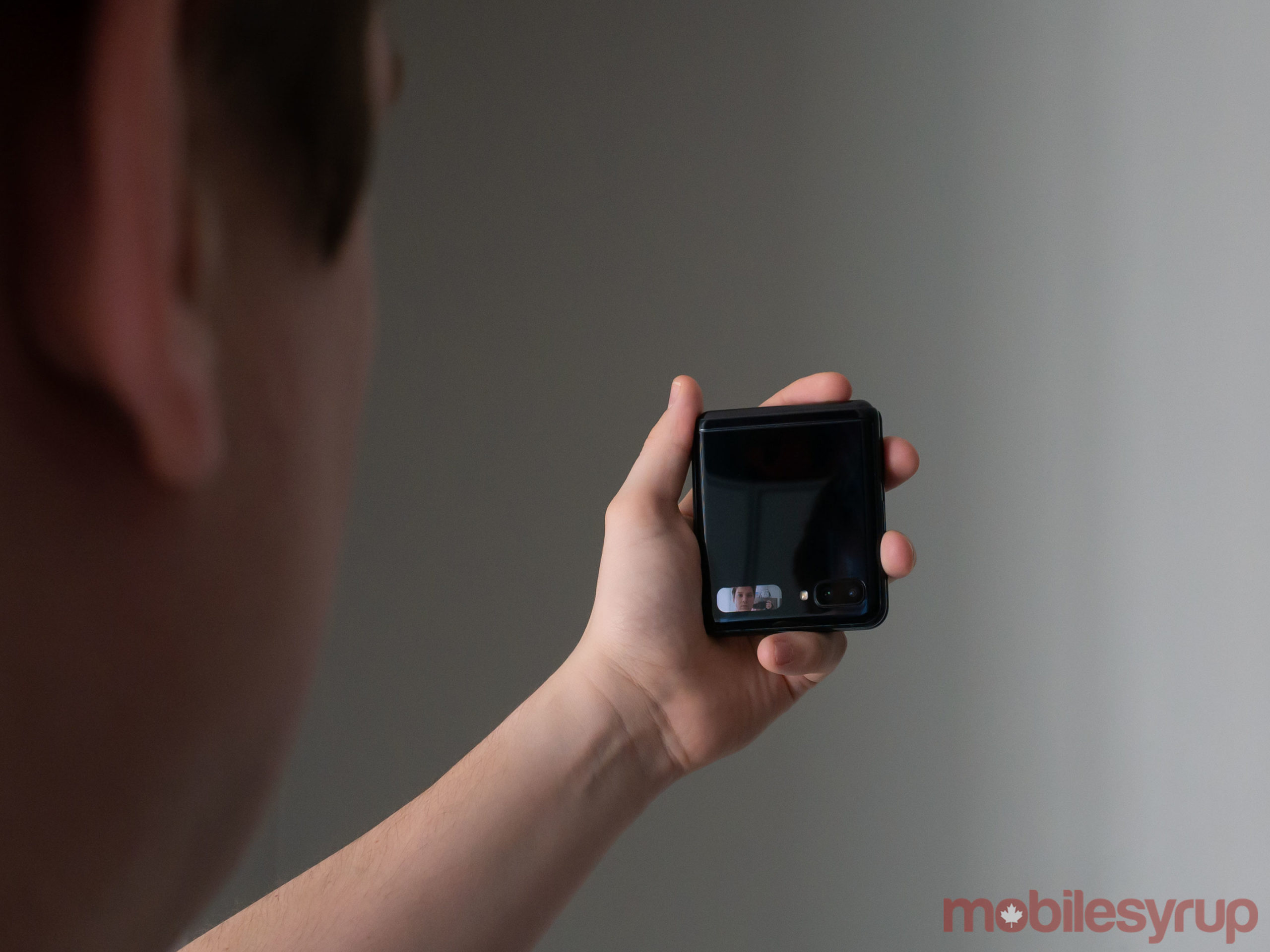 Flex Mode, unfortunately, only works with Samsung’s stock camera app and Google Duo right now. For some reason, it doesn’t seem like Google has updated YouTube to support Flex Mode, despite Samsung showing off the feature with the app during its recent Unpacked event.

Hopefully, more apps take advantage of Flex Mode in the future, especially given that Google says that it will eventually make its way to more foldable smartphones because, as it stands right now, the functionality isn’t a selling feature.

It’s also important to point out that you can still see the Z Flip’s display crease. While it would be great if the device didn’t feature a noticable crease, I don’t find this to an issue and only noticed it under certain light and angles. On the other hand, the fact that you can really feel it bothers me more. Because the Galaxy Z Flip adopts a clamshell design, your fingers end up running across the crease more when the phone is unfolded. With the Fold, this was less of an issue because that device folded out into a tablet-sized smartphone. You still felt the crease, just not as often given the display size and orientation.

Ultimately, the question of durability still lingers regarding the Z Flip. The fact that Samsung offers a one-time $199 CAD out of warranty screen replacement doesn’t exactly bode confidence either. I expect reports of Galaxy Z Flips experiencing issues to pop up over the next few weeks slowly, but I doubt the problems will be as widespread as what we saw with the Galaxy Fold. 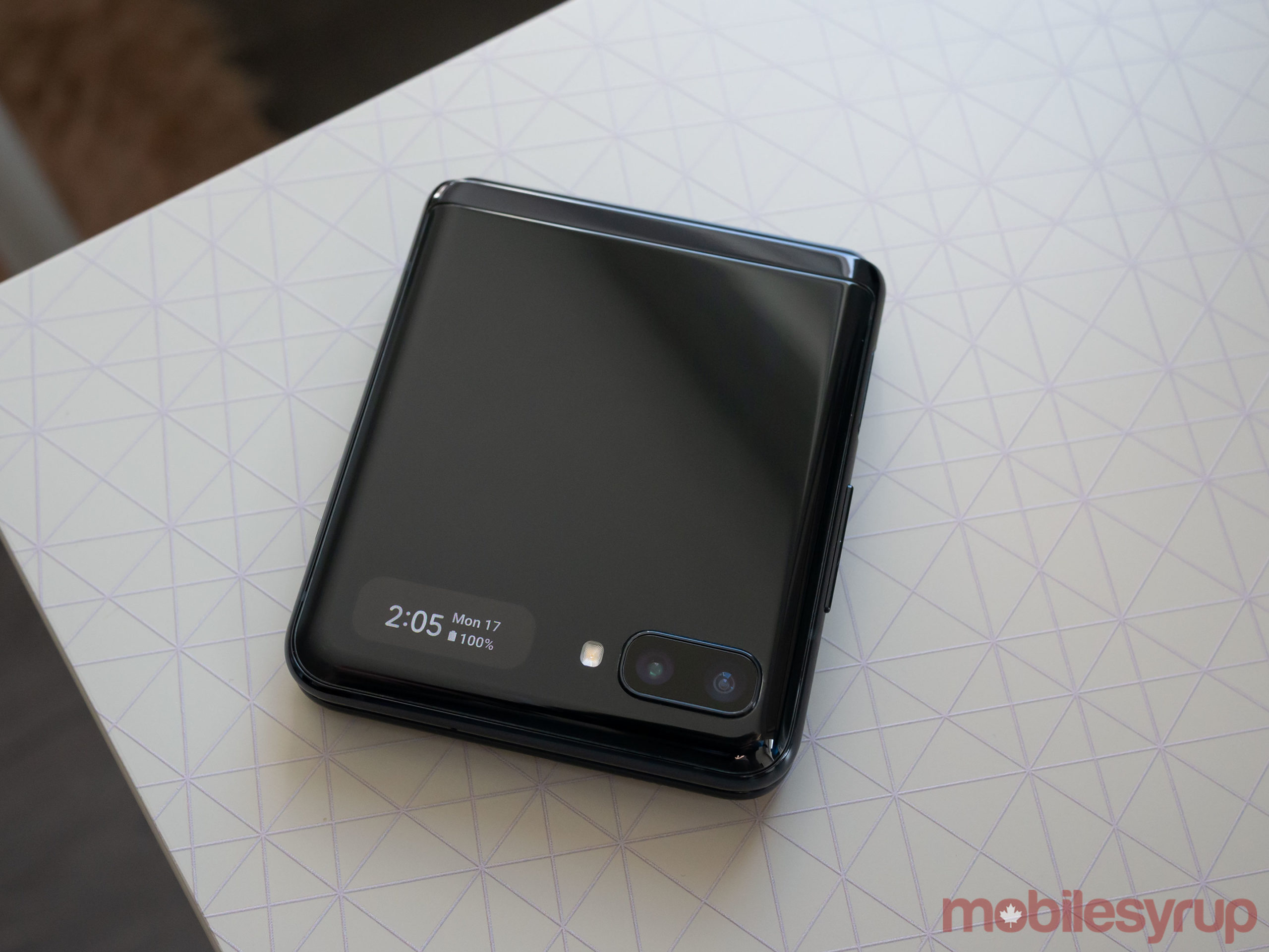 If you’re dying to get your hands on a foldable smartphone, and aren’t concerned with potential issues surrounding the durability of the Z Flip’s display, Samsung’s latest foldable is a worthwhile device and a substantial upgrade over the Fold.

Everyone else is better off waiting until Samsung’s inevitable third or fourth-generation foldable smartphone.

Since I only spent three days with Samsung’s Galaxy Z Flip, I didn’t feel confident enough in the device to put together a full, comprehensive review of the smartphone. After spending more time with the Z Flip, a more extensive review will be published.