Sony WF-1000XM3 Review: These earbuds sound great if you can get them in your ears 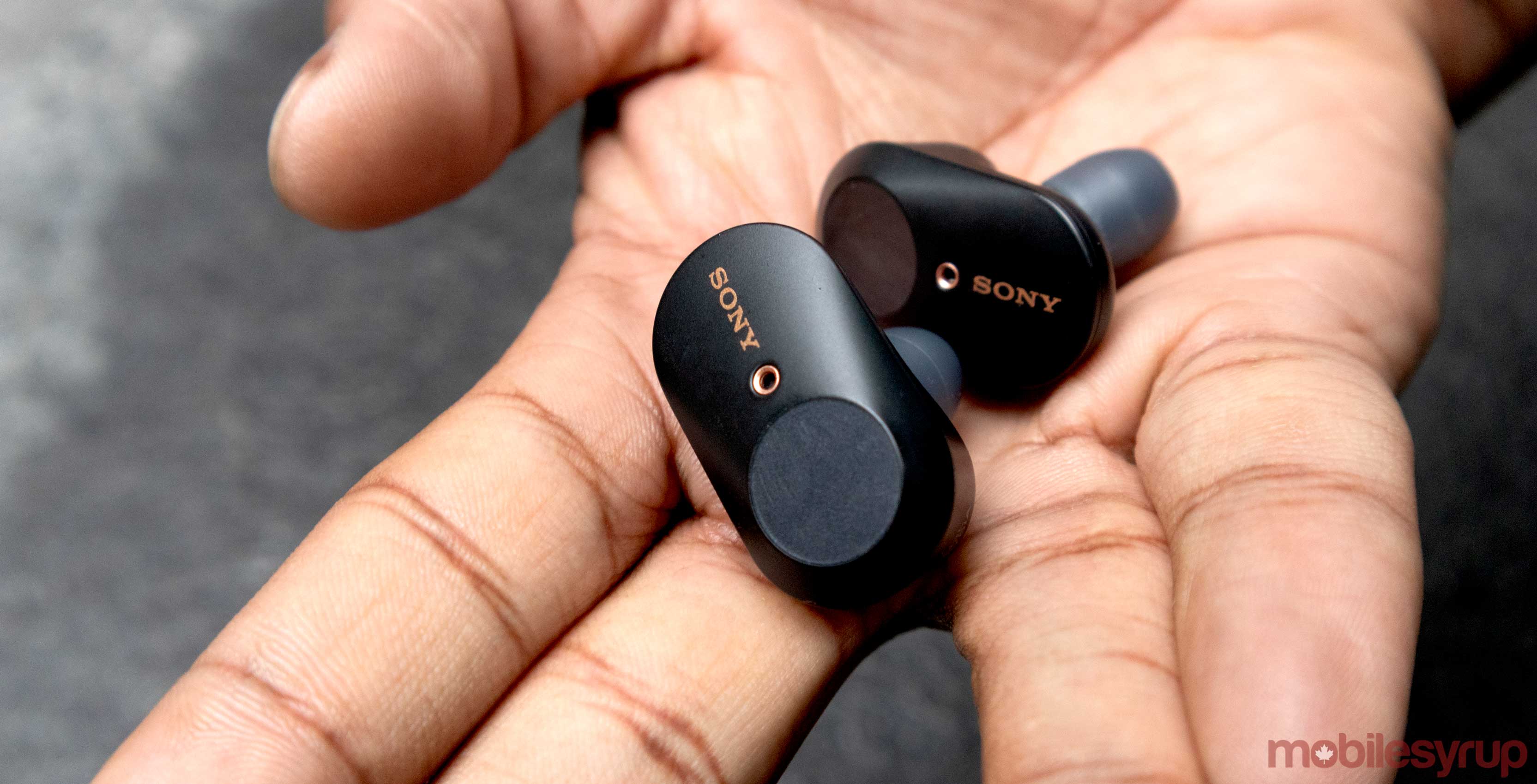 I’ve been using Sony’s latest wireless earbuds, the ‘WF-1000XM3s’, for more than a month and they’re fantastic.

While I’ve experienced struggles with the earbuds, there’s one phrase that thoroughly explains my feelings about them: “Sony, take my money.” I enjoy these earbuds so much that I’d recommend them to almost anyone.

However, the WF-1000XM3 earbuds also have a few issues, one of these being the lengthy name. Because of this, I’m going to refer to the headphones as the WF-XM3s over the course of this review.

They’re great where it matters, including sound quality, noise cancelling and battery, but the earbuds falter when it comes to comfort and appearance. 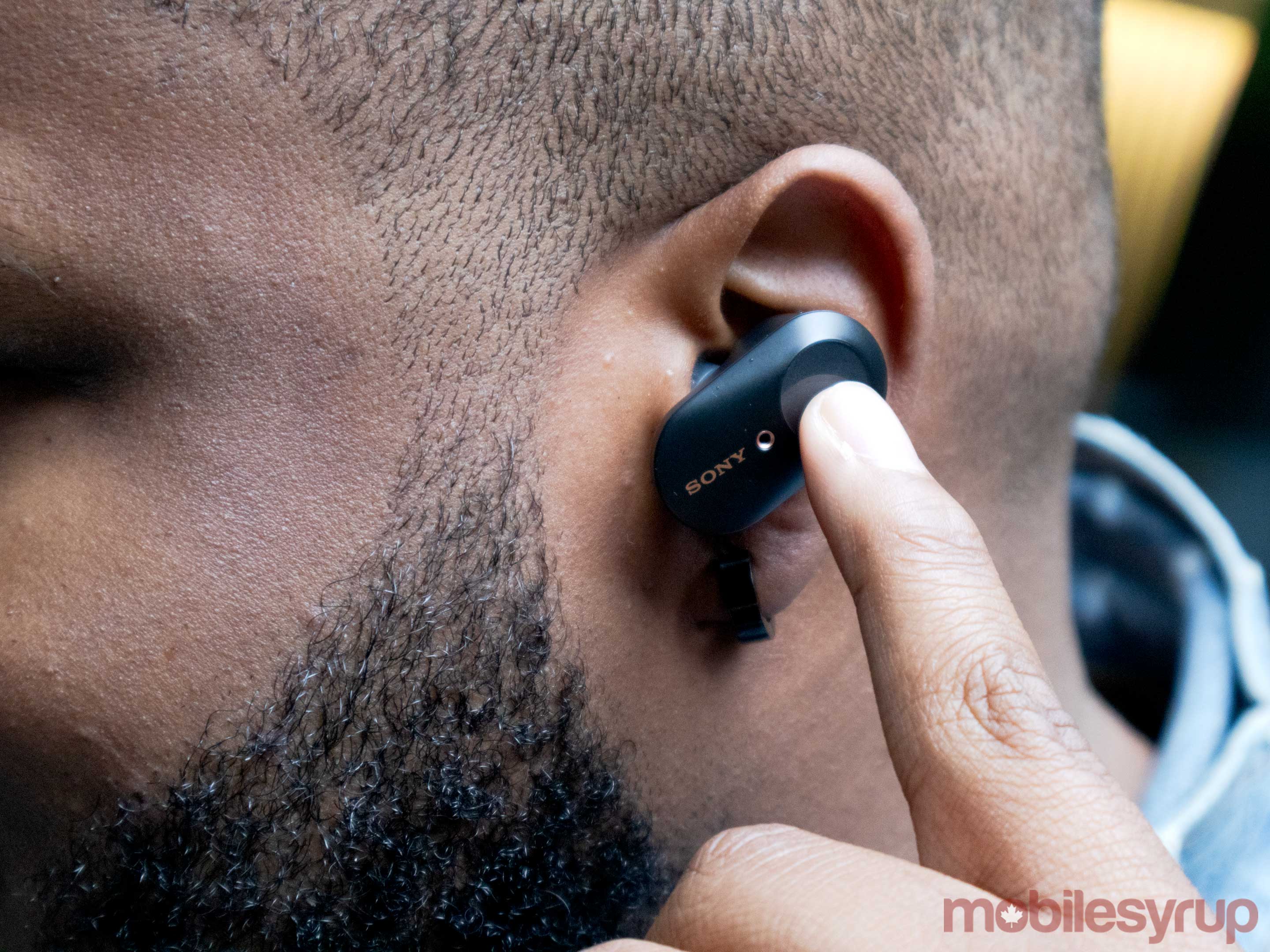 Sony’s WF-XM3s sport an oval shape that’s thicker at one end than the other. On both earbuds is a circular pad that allows users to control the device, such as being able to turn on noise-cancelling and ambient mode, as well as pausing your current song or skipping to the next track.

Next to the circle control pad is a microphone and the Sony logo.

Below the thicker end is the earbud part that goes into the wearer’s ear and under the thinner section are magnetic connectors that allow the earbuds to snap into its charging case.

The earbuds look stylish and elegant in your hand, but that changes when you put them in your ears, where they’re obtrusive and large.

In fact, compared to many other completely wireless earbuds, the WF-XM3s look retro. You can also compare the headphones to old-style Bluetooth headsets you probably used years ago to make calls in the car.

Additionally, I have relatively small ears, which make the earbuds look even larger when I’m wearing them.

The earbuds are also both 8.5g each, which doesn’t feel all that heavy in-ear. That said, it’s worth pointing out Apple’s AirPods are half the weight. Finally, the WF-XM3s come in ‘Black’ and ‘Silver.’

If your top priority is design, then the WF-XM3s might not be the earbuds for you. For me though, that’s not what matters most when it comes to a pair of earbuds. 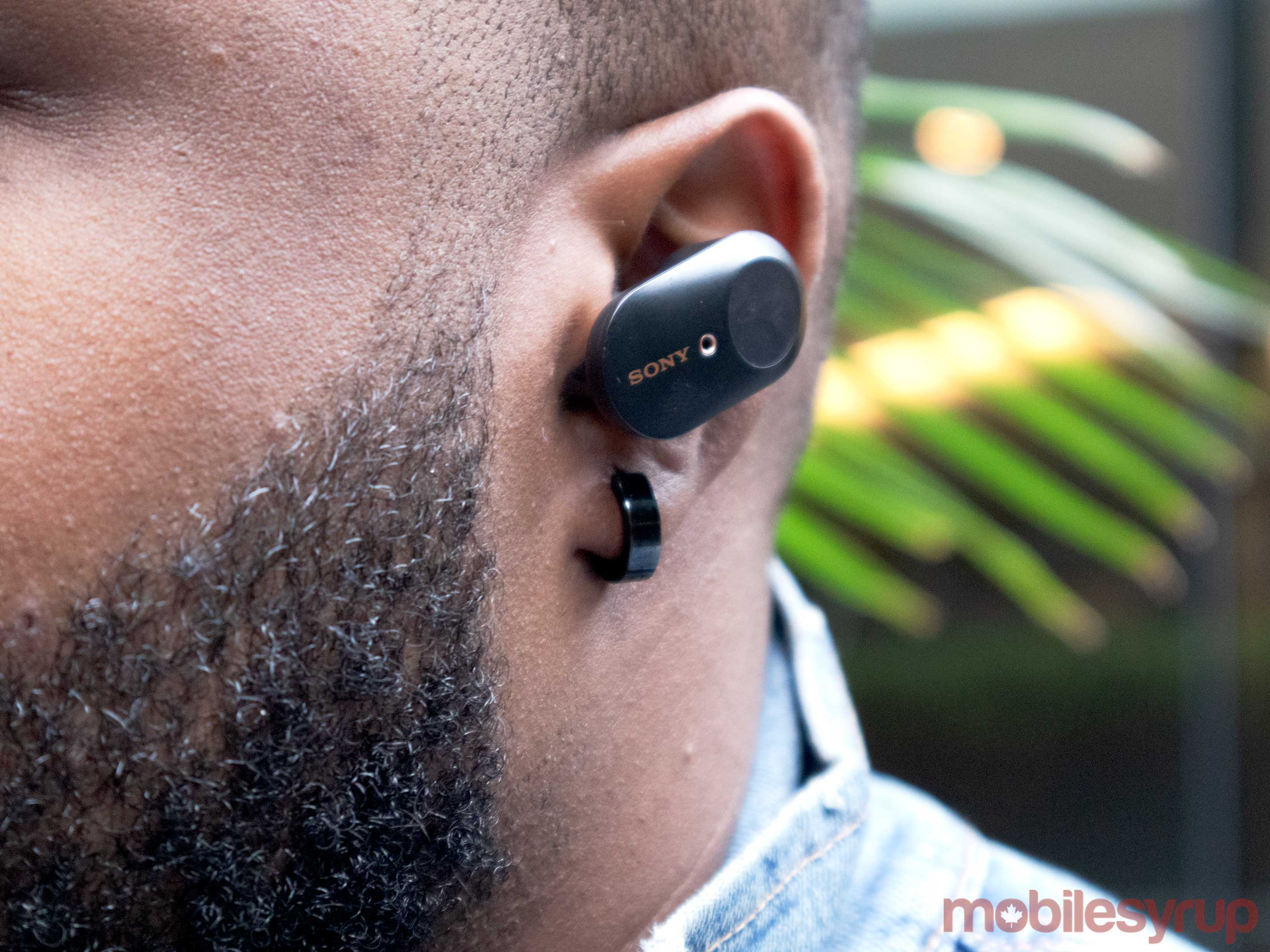 Sadly, Sony’s WF-XM3s aren’t the most comfortable earbuds, either.

I prefer Apple’s style of earbuds, as they’re easier to put into my ears and fit more comfortably. To help make the headphones fit, Sony offers two sets of earbud tips, one of which is a very soft and flimsy material, while the other is more firm. The two sets come in three sizes, with the total number of sets amounting to seven pairs of tips.

However, I’m not the biggest fan of any of the earbud tips as I found that absolutely none of them fit my ears well. This is especially noticeable when you compare the WF-XM3s to the Pixel Buds or the AirPods, which I find more comfortable.

Similar to Microsoft’s recently announced Surface Earbuds, when you put the WF-XM3s in your ear you have to turn them to lock in place. However, for me at least, they never actually felt like they fit.

I find that I’m often checking to make sure that the WF-XM3s are properly secured in my ears and that I need to regularly adjust them when I’m walking. If I’m sitting at my desk, this is never an issue.

When I’m using the earbuds while working out on the bike or elliptical, I’m checking and readjusting the earbuds even more often. Also while running, the WF-XM3s slip out of my ears easily.

Likely I haven’t found the perfect fit for my ear. However, I’ve tried out all seven earbud tips and picked the one I believed was the most fitting.

I’d probably rate the comfortability of the accessory, six out of 10, but thankfully the earbuds sound exquisite. 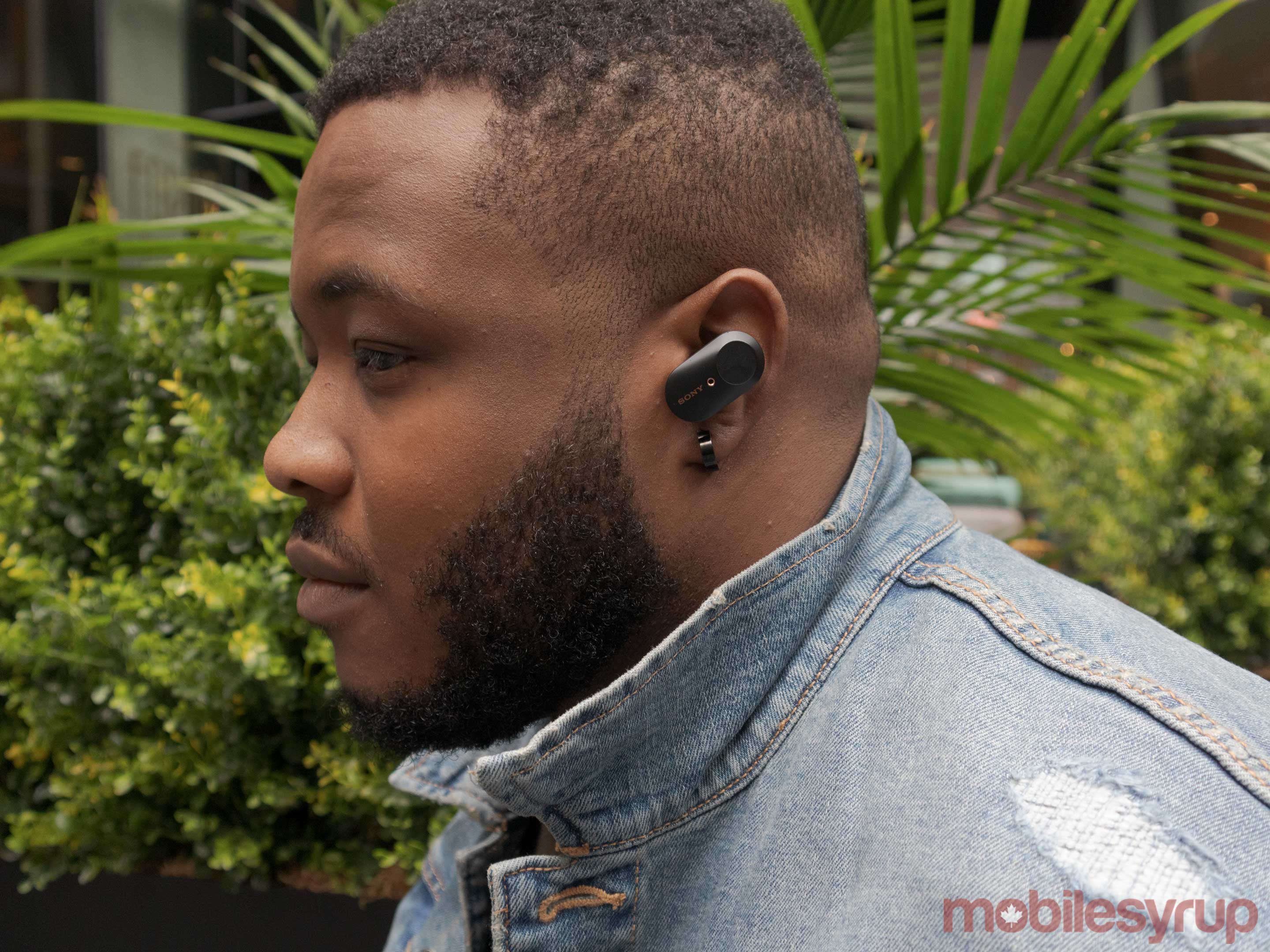 Where these earbuds really shine is their sound quality.

When I listen to genres like rap or dancehall, the WF-XM3s feature deep bass that never sounds exaggerated or bloated. As a point of comparison, the bass is more significant than Google’s wired Pixel Buds.

To accompany the bass the mid-tones and highs are full and sharp. I often listen to emo music or alternative rock, and I hear different instruments in songs clearly, which speaks to the high-end sound reproduction Sony built into the WF-XM3s.

When watching movies or TV shows with the earbuds, the sound is able to focus on different aspects of the soundtrack. This helps with voices and little things like the booming sound of thunder.

I’ve never been on the receiving end of a phone call with someone using the WF-1000Xm3, though when I’ve asked, people often say that my voice sounds clear and that they couldn’t tell I was using Bluetooth-powered earbuds. 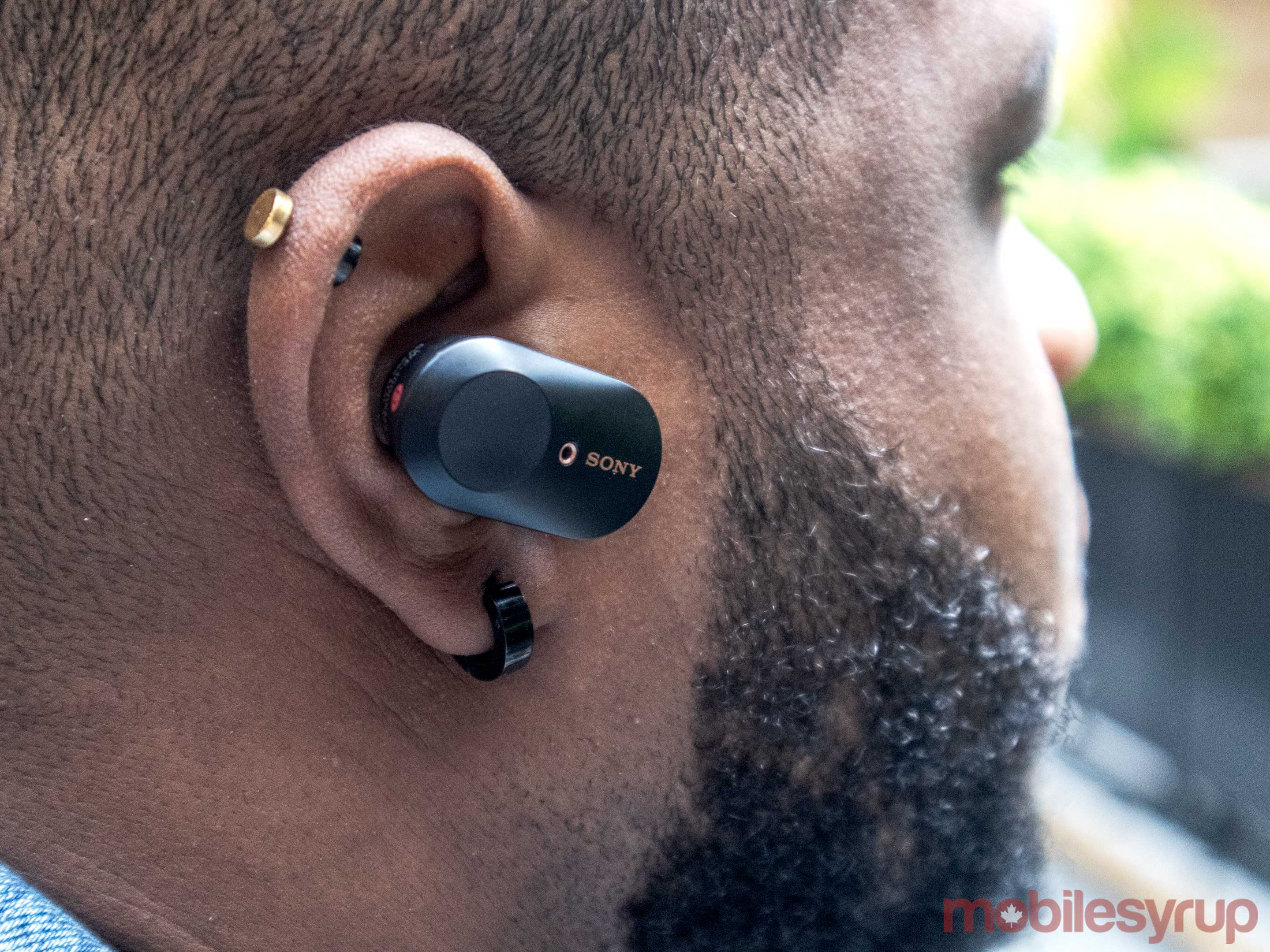 The WF-XM3’s noise cancellation feature is my favourite part of the wireless earbuds.

The fact that small earbuds can adequately block out sound is impressive. The WF-XM3s feature an HD Noise Cancelling Processor (QN1e) which cancels noise from almost all frequencies. While the feature isn’t perfect, it blocks plenty of sounds.

I find when I’m wearing the earbuds at the gym, I can’t hear any of the equipment around me, the machine I’m currently using, the people working out or even the music playing.

When I’m at work, I can’t hear my co-workers, even if they’re right beside me. However, when people are speaking loudly, I typically can make out the sounds, so I know to take off my earbuds.

The noise cancellation feature isn’t perfect, but it works well. The earbuds also work with Sony’s Headphones Connect app that is available on Android and iOS.

The app features an ‘Ambient Sound Control’ function that adjusts the sound when users are on the move. This means if you’re on transit, the earbuds are capable of completely blocking noise, but when you’re walking the microphones are able to pick up ambient sounds allowing you to hear people and cars.

The app also lets the earbuds hear only the voices when listening to music. 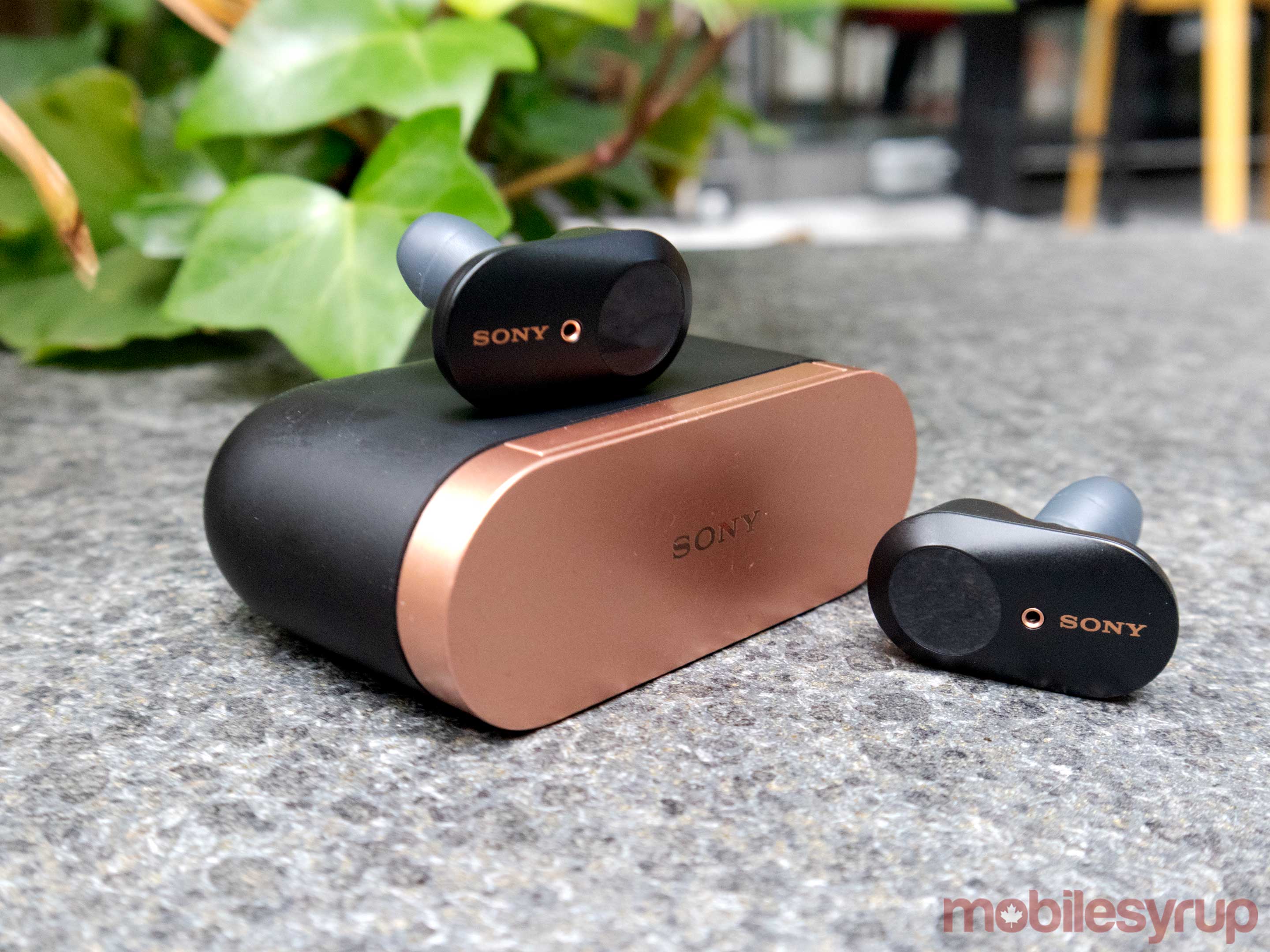 The best thing about Sony’s WF-XM3 earbuds is its battery life.

When noise-cancelling is enabled while listening to music, I found that the earbuds held about five to six hours of charge.

However, the charging case can increase the battery life of the headphones up to four times. For example, I went a whole month without having to plug in the case. However, that’s likely due to me also using other headphones throughout the week.

During the weeks that I’d only use the earbuds, I found that I’d needed to charge the case about once per week.

According to Sony’s website, the WF-XM3’s case and earbuds feature 24 hours of battery with noise cancellation turned on. In my experience, this battery life estimate sounds accurate.

Placing the earbuds in the case is easy, as they magnetically snap into place.

Once you’ve paired a device with the headphones for the first time, the noise-cancelling headphones automatically connect when you remove them from your case. The earbuds also connect with NFC, which is pretty cool. If you have it set so the buds pair with both your laptop and your phone, they’ll automatically connect to whatever they were last paired with when you remove each bud from the case.

Expensive and considerably worth it

I liked Sony’s WF-1000XM3 earbuds, and I would recommend them to anyone looking for high-quality wireless noise-cancelling earbuds. However, they’re also very expensive.

They cost $299.99 CAD, which may not seem worth it to many consumers. To put the price in perspective, Apple’s AirPods start at $219, and the Galaxy Buds cost $199. That said, neither of those wireless earbuds offer noise cancellation.

It depends on what you’re looking for out of a pair of wireless earbuds. I typically value noise-cancellation and sound quality over other features, which is why I’d buy the WF-1000XM3 despite their steep price tag.

For those who prefer comfort and style, these earbuds might not be for you.

"For those who prefer comfort and style, these earbuds might not be for you"