One week with the Project xCloud preview in Canada: A rock-solid debut

Playing Halo multiplayer on your phone really is awesome 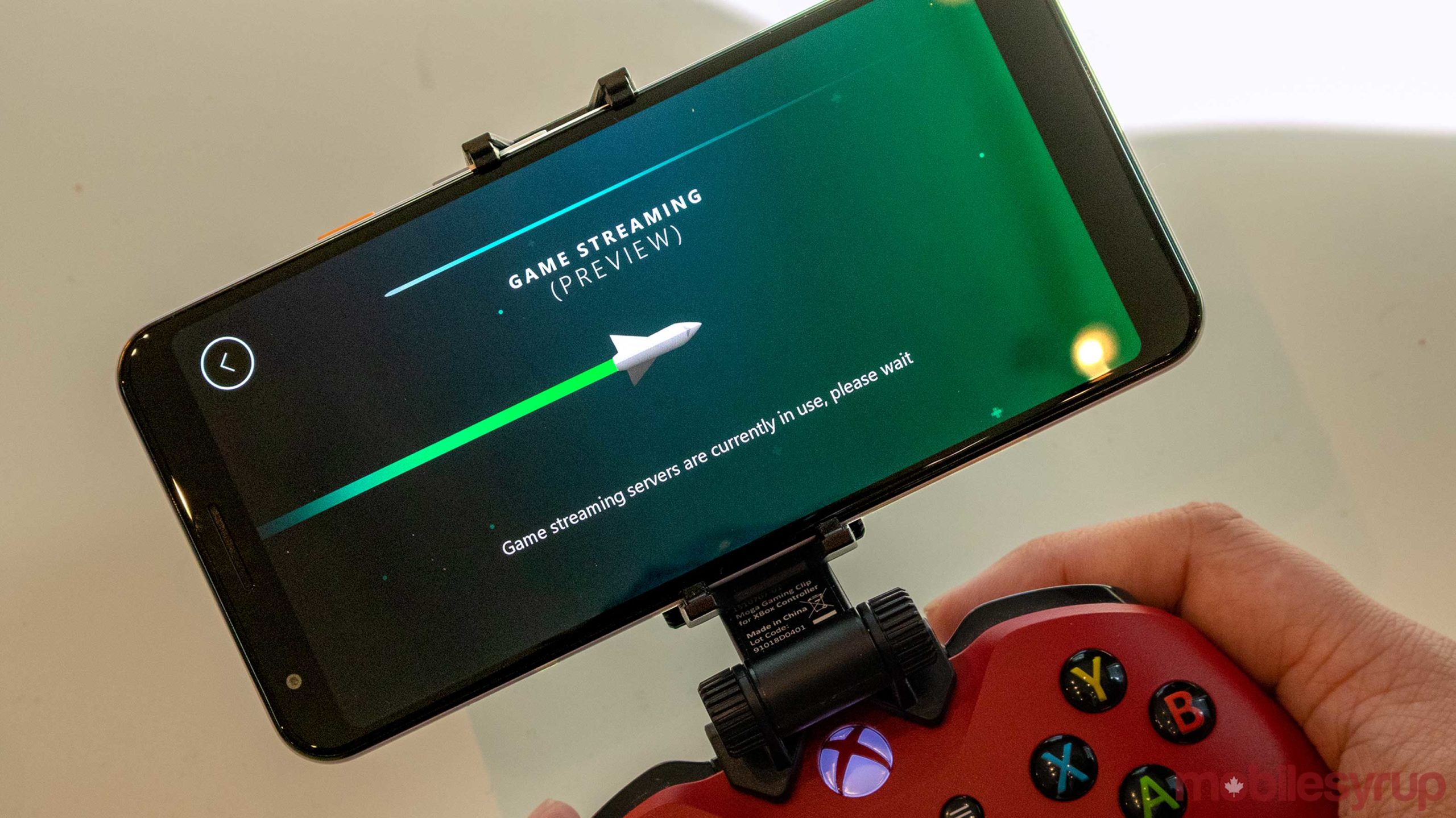 After months of waiting, Canadians can finally try Project xCloud for themselves.

The free public preview for Xbox’s game streaming service was previously only being tested in the U.S., U.K. and South Korea, but now, it’s been extended to Canada. For the uninitiated, xCloud is, ostensibly, Microsoft’s answer to Google Stadia.

Ahead of the January 29th public launch in Canada, I was given one-week early access to the xCloud preview. While I’ve gone hands-on with xCloud twice now at E3 2019 and XO19, this is the first time I’ve experienced the broader suite of games and features offered in the preview.

To start, I was pleased to find the actual setup process was very straightforward. You’ll begin by downloading the Xbox Game Streaming (Preview) app from the Google Play Store, which is also used for the Xbox One-to-Android console streaming feature that launched in Canada earlier this month.

From there, all I had to do was pair my compatible Xbox One controller via Bluetooth to my Pixel 3a. Unfortunately, only Android phones and tablets are supported for now. Similarly, it’s a bit disappointing that the original Bluetooth-lacking Xbox Elite Controller isn’t supported, although all other recent controller models, including the Series 2 Elite Controller, are thankfully compatible. 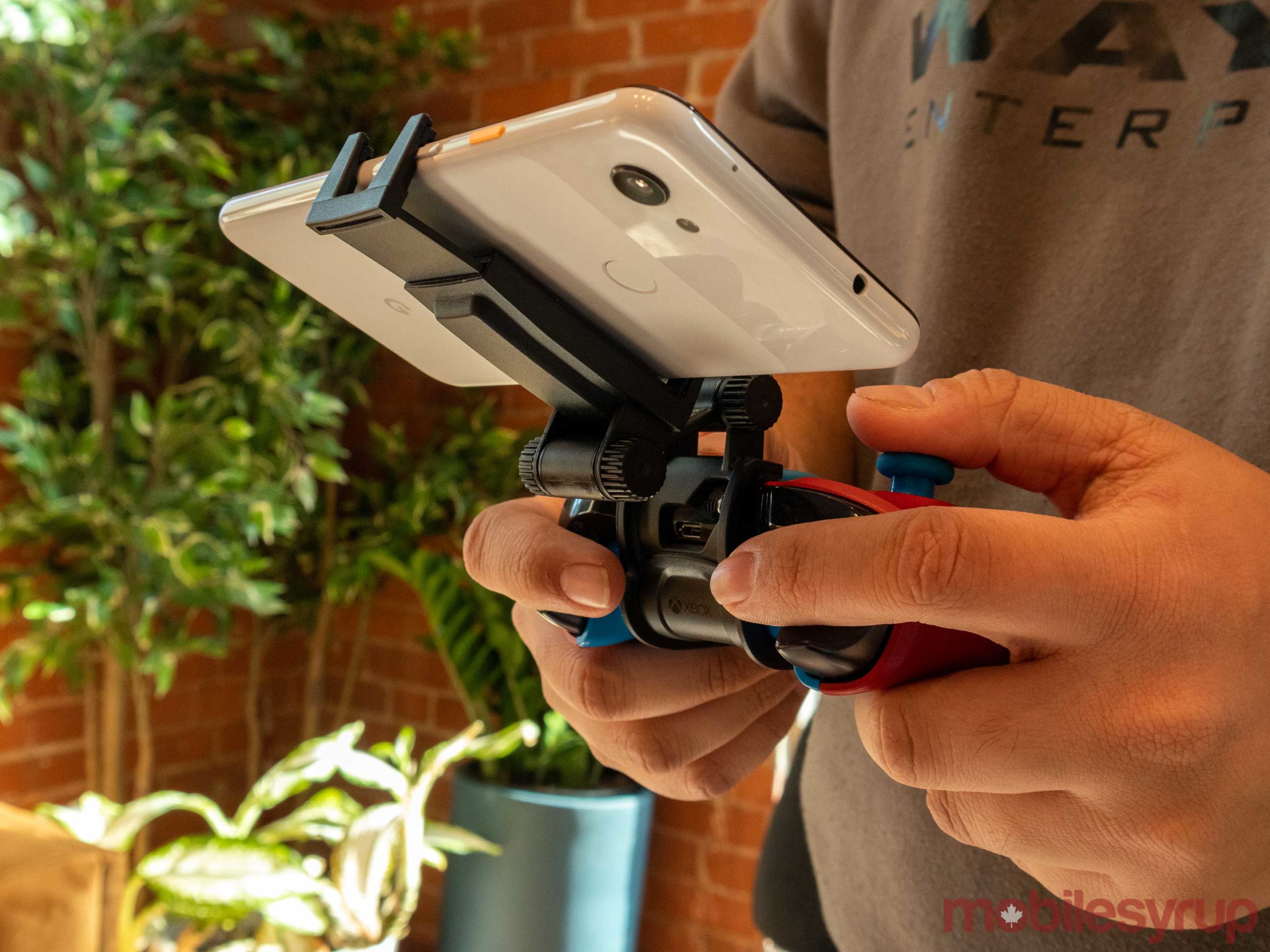 Once your controller and mobile device are connected, you’re good to start playing. In my case, I used the $19.99 CAD third-party licensed PowerA MOGA Mobile Gaming Clip, which Microsoft provided me with at XO19. This is explicitly designed to attach to an Xbox One controller and fit nicely around each of its buttons.

All told, it feels like a substantial improvement over Google’s Stadia Claw mount, which at best always felt roughly clipped onto the controller. That’s to say nothing of the added risk it had of scratching the gamepad. Unlike the Stadia Claw, the MOGA clip is also adjustable, which makes it feel even more comfortable to use. While the MOGA is by no means necessary for xCloud, it’s well worth the small investment if you plan to get a lot of mileage out of the service.

After all that setup, I quickly found myself taken aback by the lineup of games. Altogether, there are more than 80 titles available in the preview, including:

By comparison, Google Stadia officially launched in November with a paltry 22 games, which was already less than half of the 50 that xCloud opened with in preview. Now, two months later, and xCloud has nearly four times Stadia’s lineup.

More importantly, Xbox has emphasized an impressive variety of games, ranging from action (Devil May Cry 5), racing (Forza Horizon 4), strategy (Civilization VI), fighting (Tekken 7), multiplayer shooters (Halo: The Master Chief Collection, Destiny 2) and more. By leveraging its own first-party catalogue alongside many high-profile third-party titles, Microsoft has offered up a catalogue that really does have something for everyone. 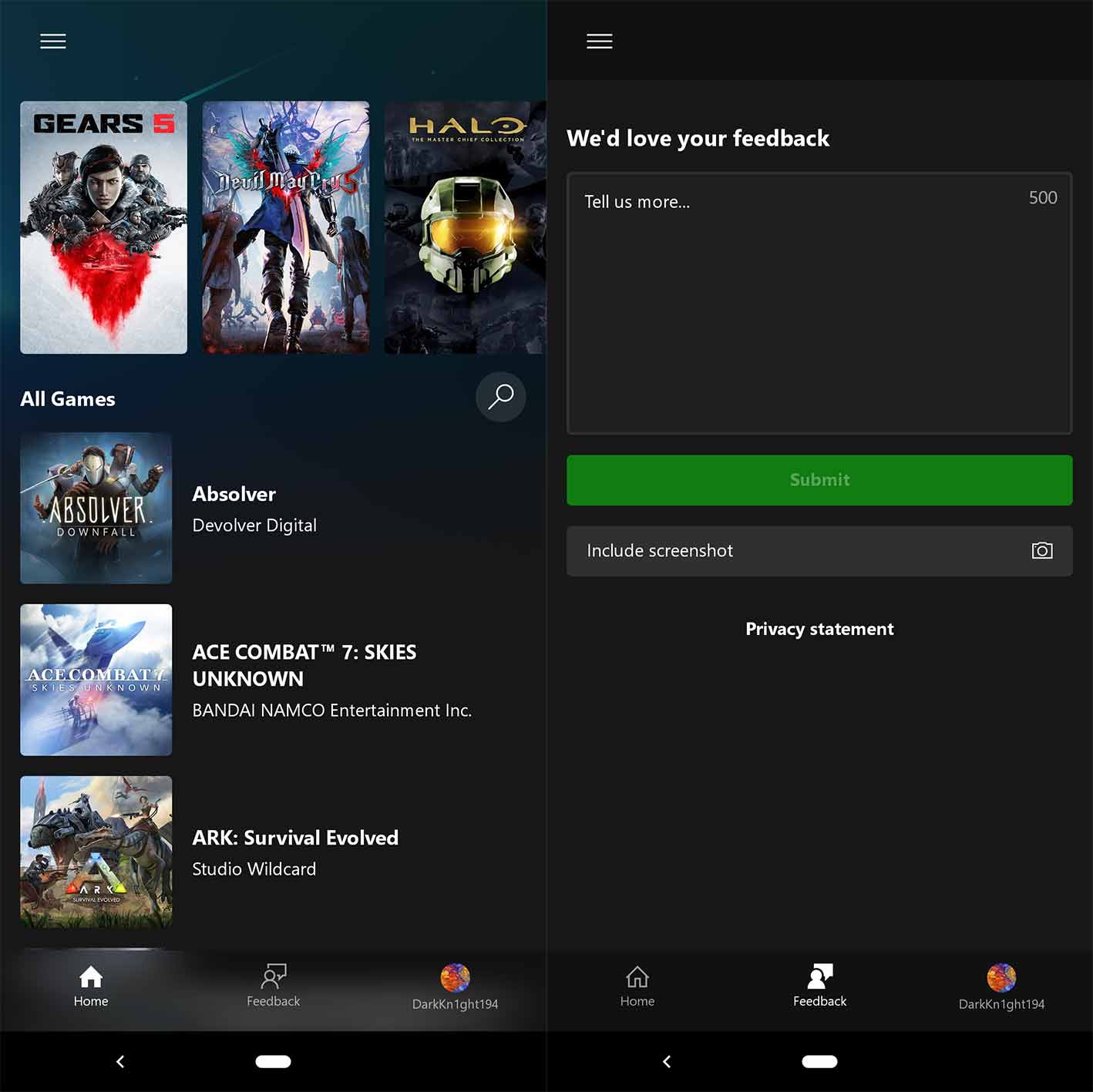 From a consumer perspective, this is a fantastic way to try out as many different games as possible, especially since the preview is free. At the same time, this should, in theory, help Microsoft collect as much feedback as possible to continue to improve the overall streaming experience. To that end, Microsoft even has an easy-to-access ‘Feedback’ tab in the app through which you can make note of any issues you encounter.

By and large, though, I haven’t had to report any issues. After several hours playing in xCloud, I can confidently say the service runs very smoothly. The only requirements for xCloud are 5GHz Wi-Fi or mobile data connection 10Mbps down, which are certainly reasonable enough.

As the tech wizards at Digital Foundry note, though, xCloud games primarily stream in 720p/60fps. This is one area in which Stadia excels, thanks to its higher 1080p to 4K streaming quality. With xCloud, resolution only seemed to get higher in certain games, like Gears 5 and Hellblade: Senua’s Sacrifice. That said, this is still just a preview, so there is always room for improvement.

For context, I primarily streamed on my home Wi-Fi, which had a 131.2 mbps connection. However, I also tried xCloud on our office Wi-Fi (42.8 mbps) and even over cellular data (53.2 mbps) — both of which were mostly successful. In the case of the former method, Halo: The Master Chief Collection, Gears 5 and Devil May Cry 5 all ran fairly well, although there were noticeable moments of lag and dips in resolution. Given that our office connection is spotty even when not streaming, though, I don’t place much of the blame on xCloud for these issues.

On mobile, I was surprised to see Devil May Cry 5 keep up. Capcom’s excellent action game is all about flashy, over-the-top combos, and those translated very well to my phone over data. There were a few ever-so-brief instances of stutter, but not nearly enough to take me out of the action. It’s a great proof-of-concept for playing xCloud games on the go, especially if you have long commutes. On the other hand, Halo: The Master Chief Collection took an exceptionally long time to load on my phone, and it’s unclear how much data that might eat up over prolonged periods of play.

For the most part, though, you’re likely going to be playing on a more reliable internet connection. In those cases, xCloud works almost flawlessly. Here, it’s quite surreal to play Halo: The Master Chief Collection online on a phone, and it’s even more surreal when it works practically just as well as it does on my Xbox One. I played several consecutive matches and I didn’t run into any problems.

Even better, Microsoft has integrated its robust Xbox Live ecosystem into xCloud. This means that features like friends lists, achievements and voice chat (via your phone’s microphone) are featured in the streaming service. Hearing a child yell at me online as I chased him with a Battle Rifle is practically a hallmark of Xbox Live, so it’s incredible that this sort of social experience can carry over to your phone.

Also carrying over to xCloud is your game saves. When I booted up Shadow of the Tomb Raider, I was pleasantly surprised to be able to access all of my saves from when I reviewed the game. Likewise, progress that my friend made playing Bloodstained: Ritual of the Night in November popped up for me as well. This is exactly the sort of cross-platform synergy that makes xCloud unique and inviting.

It will only improve in this regard, as well, once Xbox Game Pass becomes integrated into xCloud later this year. Microsoft has remained quiet on how exactly this will work, but the idea of buying Game Pass Ultimate to get titles on both Xbox One and PC, which can then (presumably) be played at no additional cost on your phone is incredibly tantalizing.

That does, however, bring up the most significant question mark regarding xCloud — price. Overall, it remains to be seen how Microsoft intends to monetize the streaming service. While the tech giant has confirmed that games you already own will be accessible in xCloud, it’s unclear if there will be some sort of subscription to use the service. This will be especially relevant to people who don’t have an Xbox or gaming PC and want get into high-quality gaming experiences via xCloud. 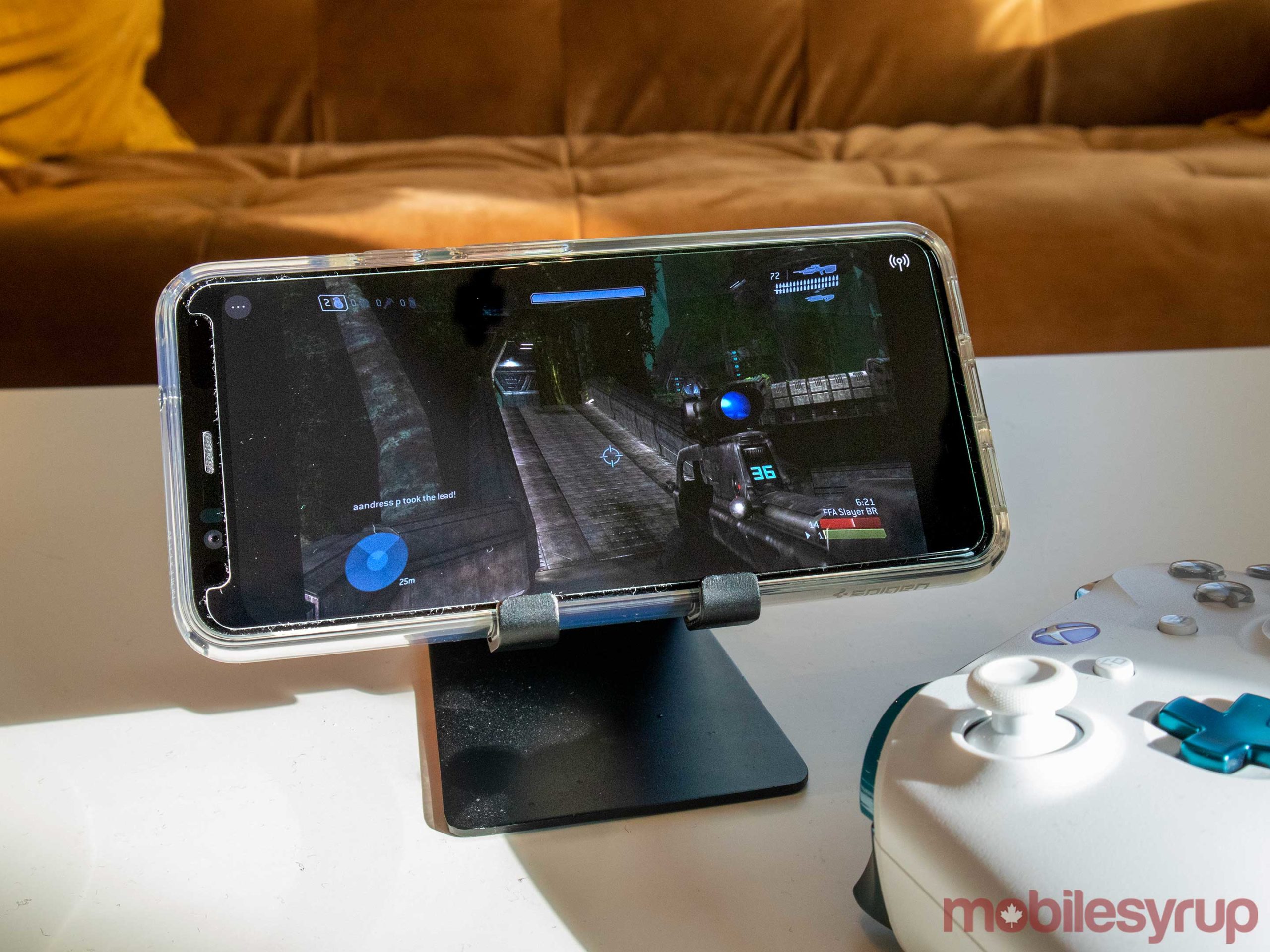 It also remains to be seen when support will come to iOS and other devices. As some who predominantly uses an iPhone, this is something I’m especially eager to know. For context, Stadia currently supports TVs (via Chromecast) and Chrome browsers, in addition to Pixel phones.

Ultimately, though, there’s much to be excited about with xCloud. As xCloud general manager Catherine Gluckstein told me in a recent interview, Xbox is taking a staggered approach to “get this right.” The desire to test in as many markets as possible before exiting preview will go a long way towards improving overall streaming quality. Indeed, Microsoft was wise to position this as a preview, as that makes it easier to forgive technical issues and general lack of device support.

Even when considering this is a preview, though, it’s still remarkable how much is included. Being able to try dozens of quality games for free is no small offering. Further, knowing that popular services like Xbox Live and Game Pass will be featured in the service ensures that you’ll get fully-featured gaming experiences — something Stadia has largely lacked since launch.

Most importantly, Microsoft understands that many people will still want to play games through dedicated hardware. That’s not going away; in fact, the company is poised to launch its next-gen Xbox this holiday season, all while doubling down on PC gaming. In the end, streaming is just a new option, and I’m excited to see how it all pans out.

It’s worth noting that Microsoft has been updating the preview with new games over time. Therefore, we’ll revisit xCloud in the future with updated impressions as the service grows.

For now, Canadians interested in taking part in the preview can register here. Microsoft hasn’t confirmed exactly when xCloud will officially launch, but it’s slated to roll out widely sometime later this year.