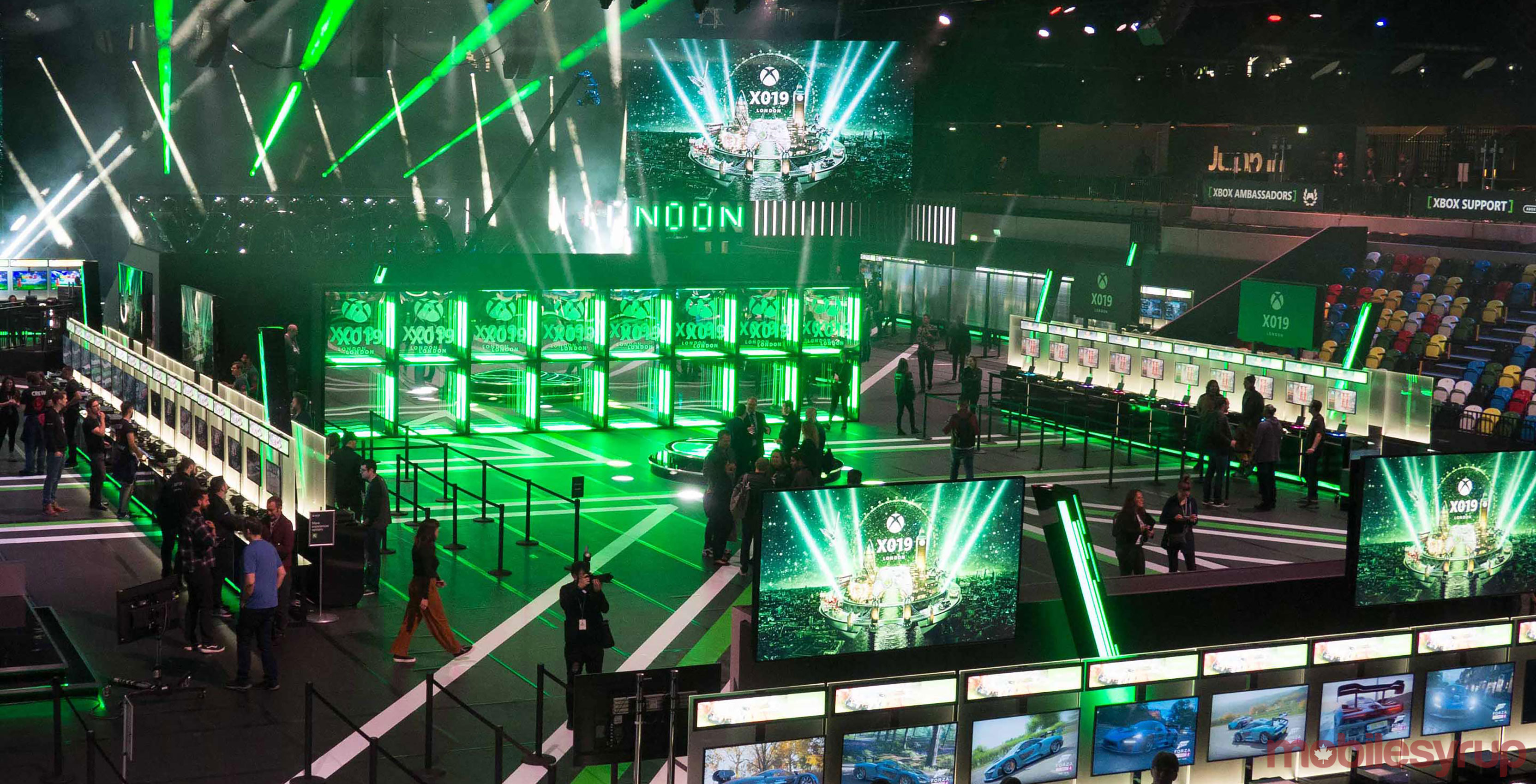 Typically, a gaming company that’s still a year out from launching a new console remains relatively quiet about its future plans. Look no further than market leader Sony, whose next-generation strategy surrounding the PlayStation 5 is largely shrouded in secrecy.

That’s not been Microsoft’s approach, however. As it prepares to launch its Project Scarlett console next holiday season, the Redmond, Washington-based tech giant has been rather candid about Xbox’s vision for the future of gaming.

In particular, the company has rapidly grown its roster of Xbox Game Studios and Game Pass on-demand subscription service while expanding previews of its ambitious Project xCloud game streaming technology. These three pillars will be major components to Scarlett. 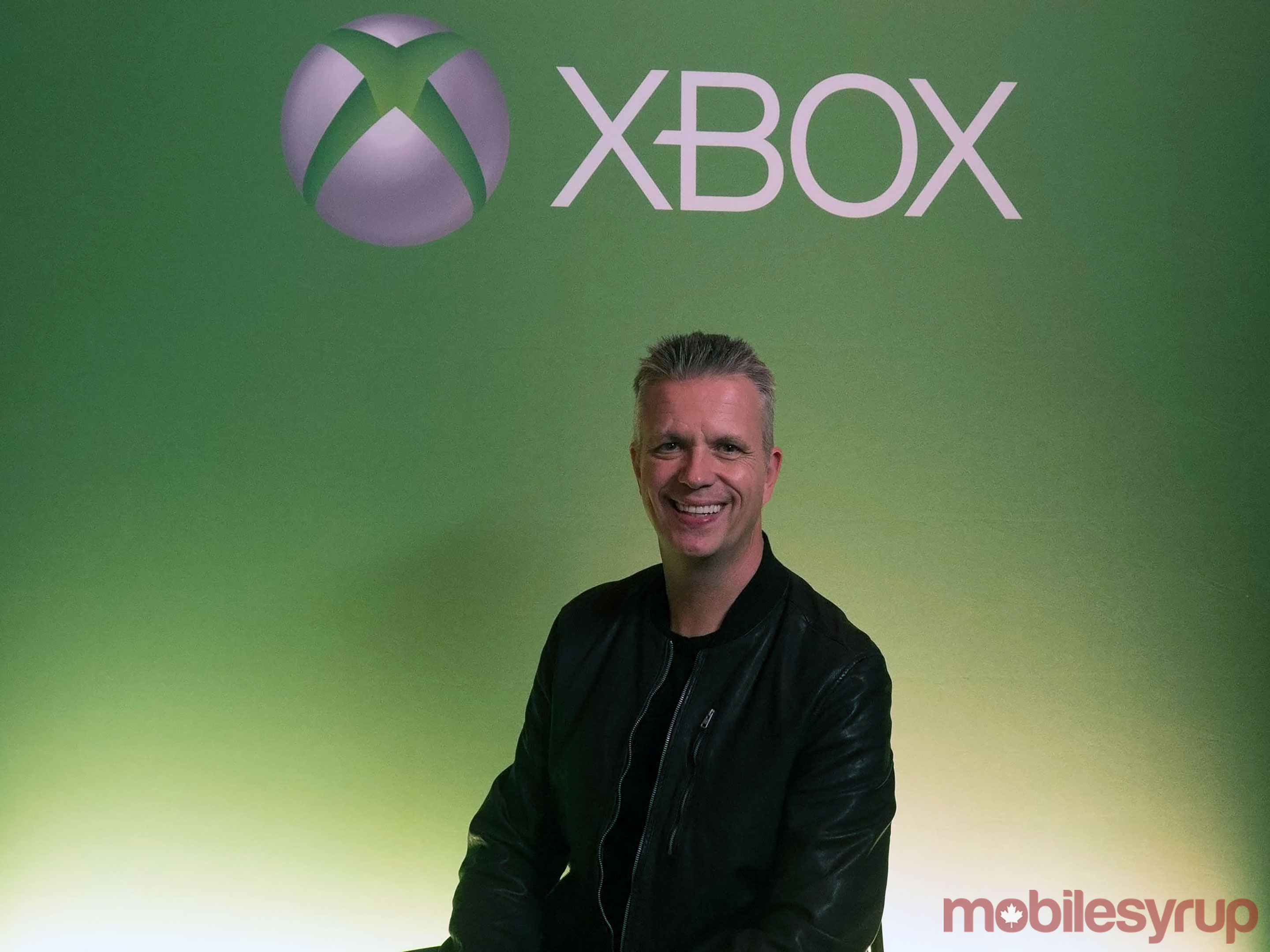 For now, though, Microsoft has this far-reaching gaming approach on central display at XO19, Xbox’s London, England-based event that celebrates all things Xbox with the fans. While at XO19, MobileSyrup sat down with Matt Booty, head of Xbox Game Studios, to discuss the rise of Game Pass and xCloud, Xbox’s approach to bringing its games to other platforms, Project Scarlett, and more.

Question: To start, I want to talk about Xbox Game Studios as a whole. Your studio lineup has grown significantly since last year, and what’s interesting is they’re pretty spread out in terms of where they’re located [across the U.S., Canada and Europe] and the types of games they make. With that said, when you’re looking at new teams to join Xbox Game Studios, what sort of criteria are you considering? How do you settle on, say, Compulsion Games, a small indie studio from Montreal, and, soon after, a well-established larger team like Obsidian?

Matt Booty: If you were to make a sort of spreadsheet on the wall and get your string out [to find] the commonality between all of these, I think the thing you would find is that they’re creator-led.

And that, really, is the commonality between a big studio like The Coalition [in Vancouver] that has hundreds of people working on Gears of War and Compulsion in Montreal. Rod Fergusson is the studio leader [of The Coalition] — he is the functional and spiritual head of that studio, but he is also very deeply involved in the game design and what that game is going to be.

Same thing with [Compulsion head] Guillaume [Provost] — he’s got 50 people, not hundreds, but he is very involved in what happens in the studio, the creative direction and what their principles are. 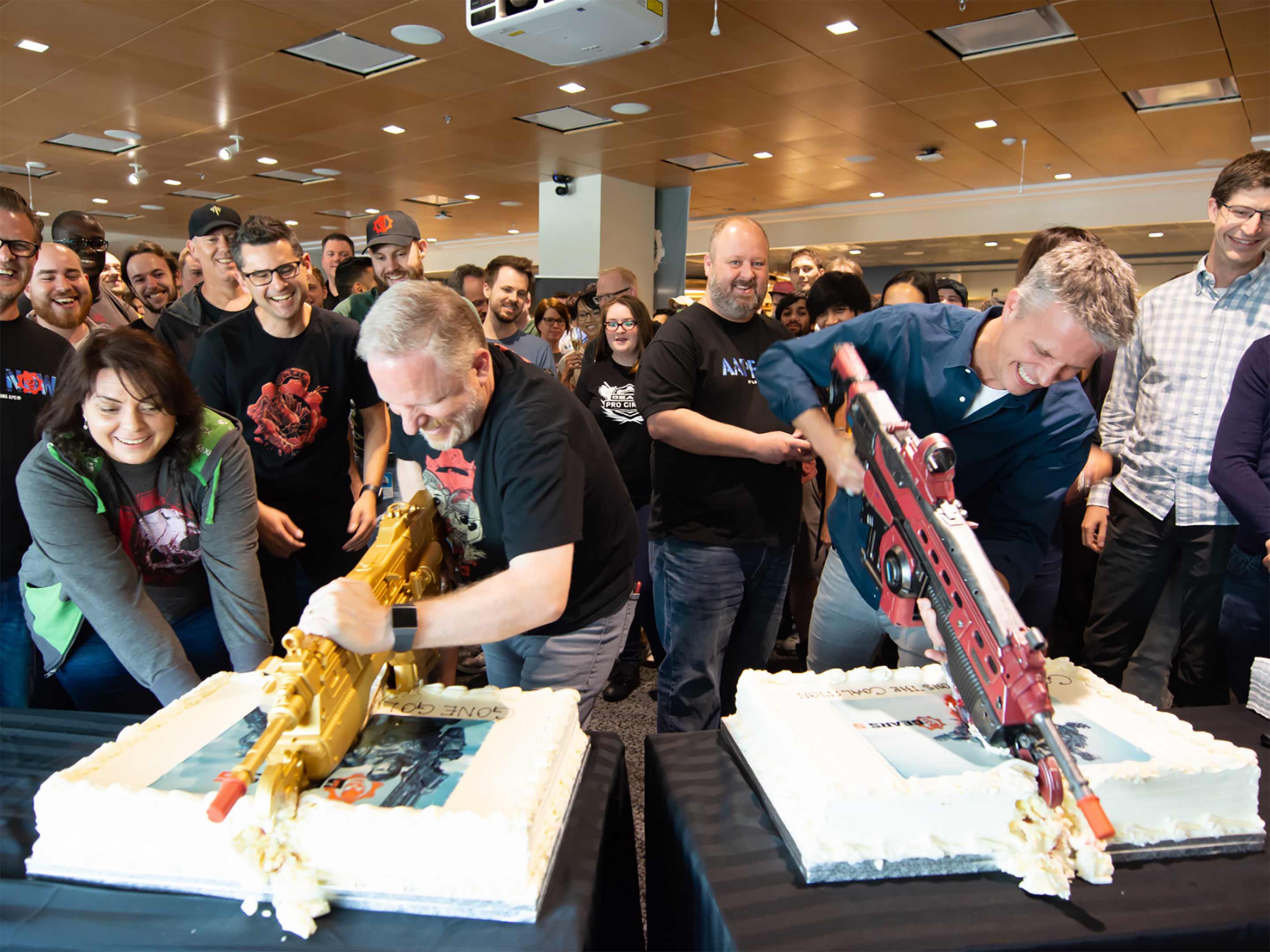 I think you could walk through each of the studios — both with established franchises like [Mojang’s] Minecraft and Turn 10 [Forza Motorsport] and the newer ones like InExile [Wasteland 3] and Obsidian [The Outer Worlds] and Ninja Theory [Hellblade: Senua’s Sacrifice] — and realize that all of the people that have built these studios and run them for decades are the creative leaders. Our studios are, first and foremost, led by creators.

Q: You said earlier [during an XO19 media presentation] that now is the beginning of the “execution phase” for Xbox Game Studios, after a prolonged acquisitional period. Now that you have this big team assembled, what are some of the challenges associated with managing all of its players? How do you balance giving creative freedom but also ensuring that each studio is doing something unique and allowing each an opportunity to shine?

Booty: Making sure that they’re not all making the same kind of game is actually probably the easiest part of my job just because it turns out they’re not, so we don’t really have that problem. Now, it’s not to say that we might not in the future and we’d have to do some “air traffic control” to make sure that we don’t get two of the same [game].

The challenge really comes down to what I see as my main job and my main responsibility, which is to make sure that the studios have what they need to be successful. And it’s really my job to be of service to the studios. And by me, I mean, me and the immediate team around me and all the sort of central functions that we have in Redmond to make sure that they feel supported, that they have the resources they need, and that they’re fully empowered to go make the game that they want to make. We provide very little direction top-down on what somebody should be making.

Such a privilege to spend time last week with this amazing group of studio leaders and our partners across Xbox and Microsoft. #xboxgamestudios pic.twitter.com/APbrbTVAar

But I want to make sure that they understand: here’s where we’re going with the design of Scarlett, here’s what we see as the future of Game Pass, here’s why we’re out making xCloud, so they have a clear picture of what those strategic goals are. Once they understand that, we give them the resources they need. That really is the challenge for me day-to-day.

Q: Earlier this year, The Coalition told me that a big goal with Gears 5 was to make it a suitable entry point for players. A big reason for that, they said, is because Gears 5 was the first Gears game available day-and-date on Game Pass, which opens it up to a larger audience. Was this design philosophy unique to The Coalition on Gears 5, or is it something that the larger Xbox Game Studios portfolio is pursuing as well?

Booty: It’s both. I think on the immediate level, what one game does definitely becomes an example for the other games. Gears 5 has set the bar for us both in terms of straight out accessibility and how they’ve approached their on-ramp, right to how they’ve approached their on-ramp for new players. They did a great job with a Gears recap […] and structured things within the game so that it’s more friendly to new players.

So that becomes kind of the bar of what we need to do, but it’s kind of a macro thing across all of our games. We are getting the benefit of Game Pass, which is this big audience “broadener,” and we need to make sure — we have a name for it: FTUI, or first time user experience — that the FTUI is actually put together well and brings people into the game, in case they haven’t encountered this before.

Q: Xbox has been in the rather unique position among the three main platform holders [the other two being PlayStation and Nintendo] to expand some of its games beyond its own ecosystem, like Cuphead and Ori and the Blind Forest, or even, to a lesser degree, bringing Banjo-Kazooie to Super Smash Bros. Ultimate on Switch. What’s Xbox’s larger philosophy going forward with respect to bringing games to rival platforms? Were those games isolated cases, or are you open to bringing other titles to PlayStation or Nintendo platforms in the future?

Booty: To answer that in a very immediate and direct way, we’re always going to try to make stuff exclusive. And in many of the examples that you brought up, those are legacy situations where the deal didn’t involve exclusivity, like [developer] Moon, which has the right to take Ori to other platforms.

When something goes to another platform, we want the entirety of Xbox to move over and not just the game. That’s why, for example, when we take the game over to Steam, it goes over with Xbox Live so you can stay connected to your Xbox Live community. That is we’re going to want to do moving forward.

Q: So if you were looking to bring a game to a rival platform, you wouldn’t do it unless it included “the entirety of Xbox?”

Booty: That is the goal — that the [game] that travels is the overall bigger unit of Xbox and all the services and platforms and content that represent that and not just one piece of it.

Q: On the subject of other platforms, Microsoft has been increasing its mobile game presence recently through titles like Gears Pop and Minecraft Earth. How do you decide which first-party franchises get a dedicated mobile entry, versus others that might just be made available on mobile through Project xCloud streaming?

Booty: There are a couple of approaches. The first is if you start with some of our bigger franchises like Halo and Gears and Minecraft and Forza, for example — those franchises are always interested in trying to go out and really provide an experience of the franchise to as many players as possible. We’ve done a Halo game on mobile before, for example [2013’s Halo: Spartan Assault]. What experience can [our studios] do to go out and meet people that are playing directly on mobile? So that first part of our mobile approach really starts with franchises. 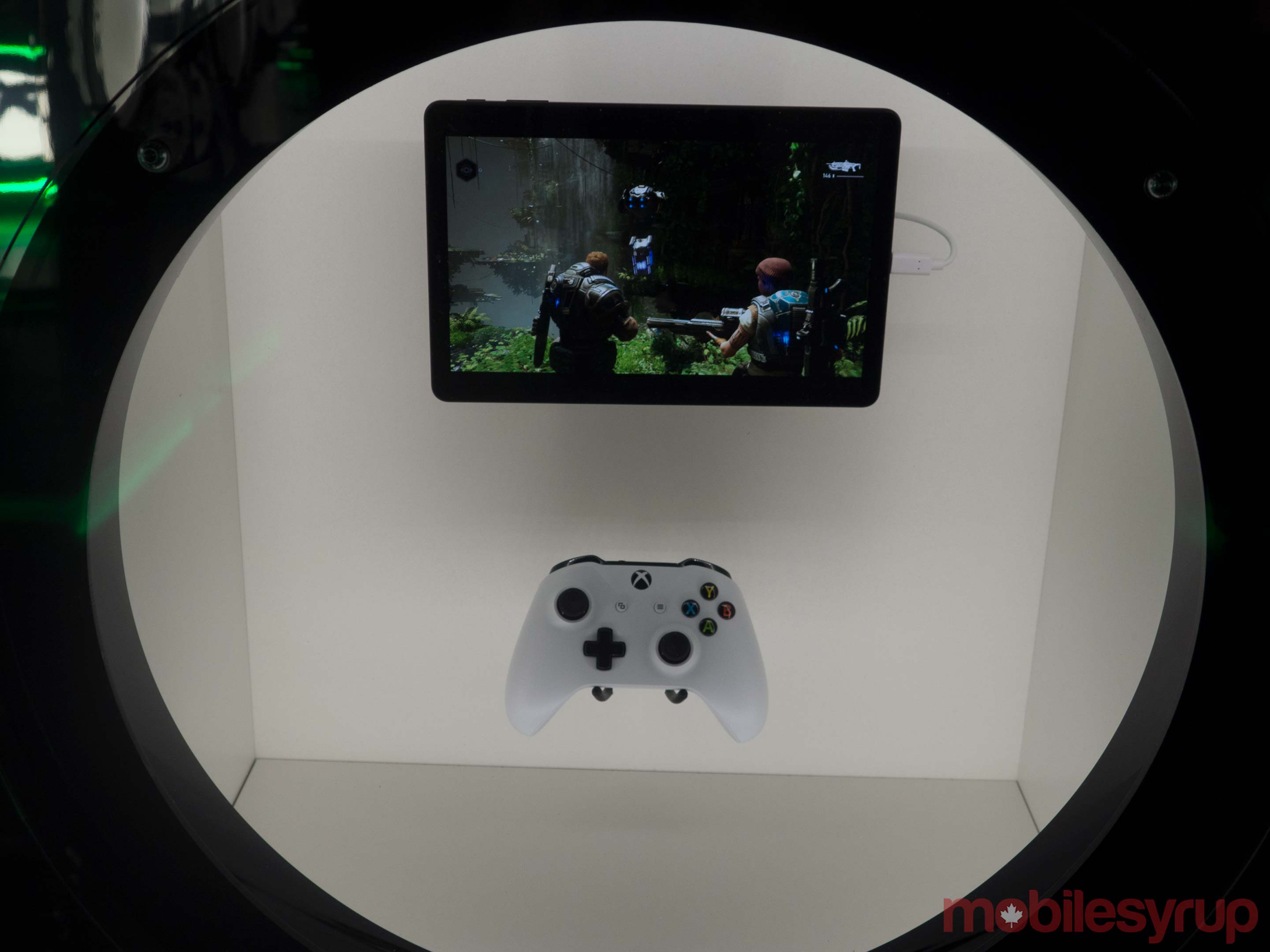 However, I think one of the great things in terms of where we are positioned for success here is with xCloud. The ability to take your experience that you’re playing on a console, and then have that follow you as you go onto a mobile device and bring that AAA content onto the phone. And so we’re sort of leapfrogging this intermediate step of how do we get all this content to run on mobile and still be fun and how do you go and make a Halo that’s fun to play?

Instead of thinking about there being a console version, a PC version, a phone version, let’s just have it be Gears of War. And when you’re home in your living room, you’re going to play on your console. If you happen to be somewhere else, and you’re on a laptop or on the phone, you can use xCloud to access that same game, only it’s going to be delivered in a different way.

Q: Finally, what excites you most about Scarlett? What are some of the ways that the console will better help developers in making their games?

Booty: I think with this next-gen of hardware, we’re entering an era where the technology will become more invisible in the process, in that we have hit a point of power and the point of being able to do so many amazing things that we can start to use that technology to get out of the way.

And what I mean by that, for example, is when you’ve got storage devices that are sufficiently fast, and you have memory bandwidth and memory buses that can move things off storage into memory so quickly, you don’t have things like pauses, you don’t have saved screens, load screens — that stuff can just go away and fade in the background. From the point of view of a storyteller and a game builder, this is great because you’re not having to do things specifically about the technology.

I think you can also go back and look at things, for example, like 8-bit graphics. Graphics in the 8-bit era had such a look that it actually now has become an art style. With graphics for video games today, artists are free to pursue whatever they want. If you want to go make a photo-realistic character, like Senua in Hellblade? Great, the hardware can support that.

Hopefully, it just starts to get out of the way, where you’re more talking about what is the story, who are the characters, what is the world, and less about realizing that, “Oh, right now I’m hitting a loading screen because now my game loads off of a Blu-ray and that thing can only spin so fast. Hopefully, we start to get the technology advanced enough that you’re just in the experience.