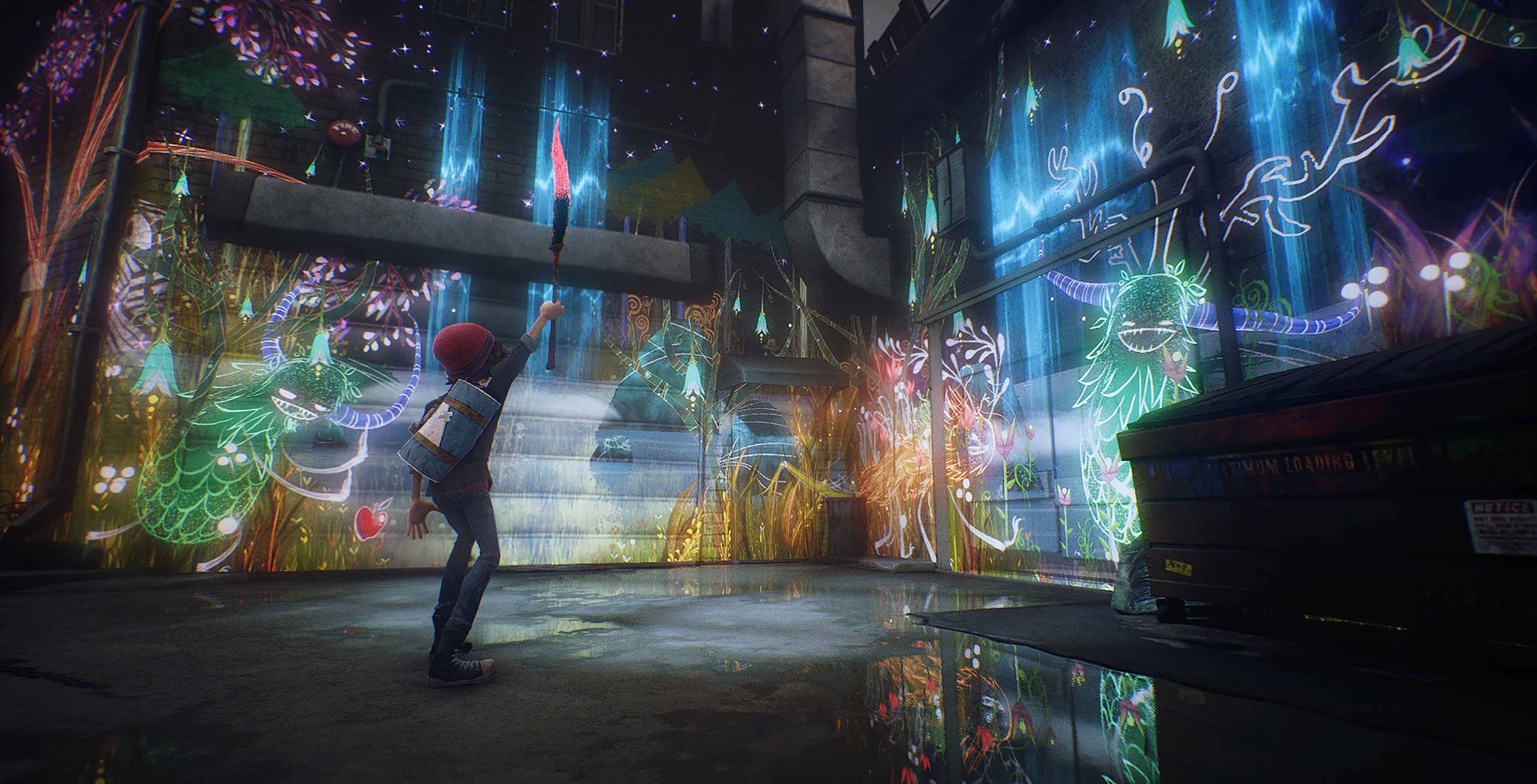 I went into Concrete Genie knowing very little about the game. As a smaller title developed by lesser-known Sony studio PixelOpus, it largely fell under my radar.

Thankfully, Concrete Genie is a pleasant surprise, thanks to its likeable lead character, a sincere tale about bullying and the power of art, and wonderful creation mechanics.

Concrete Genie follows Ash, a lonely boy who’s tormented by the neighbourhood bullies and finds solace in his drawings. One day, he discovers a magical paintbrush that lets him bring to life colourful creatures called genies. With his new abilities and allies, Ash sets off to restore colour and life to the dilapidated and abandoned city of Denksa.

Right from the start, I took to Concrete Genie’s endearingly quirky character designs, which feel lovingly plucked from one Laika‘s uniquely animated films, like Coraline or Kubo and the Three Strings. At the same time, the game uses stylistic hand-drawn art to convey brief flashbacks, which help give the game an even more popping aesthetic.

Naturally, though, the true beauty of Concrete Genie lies in its painting mechanics. 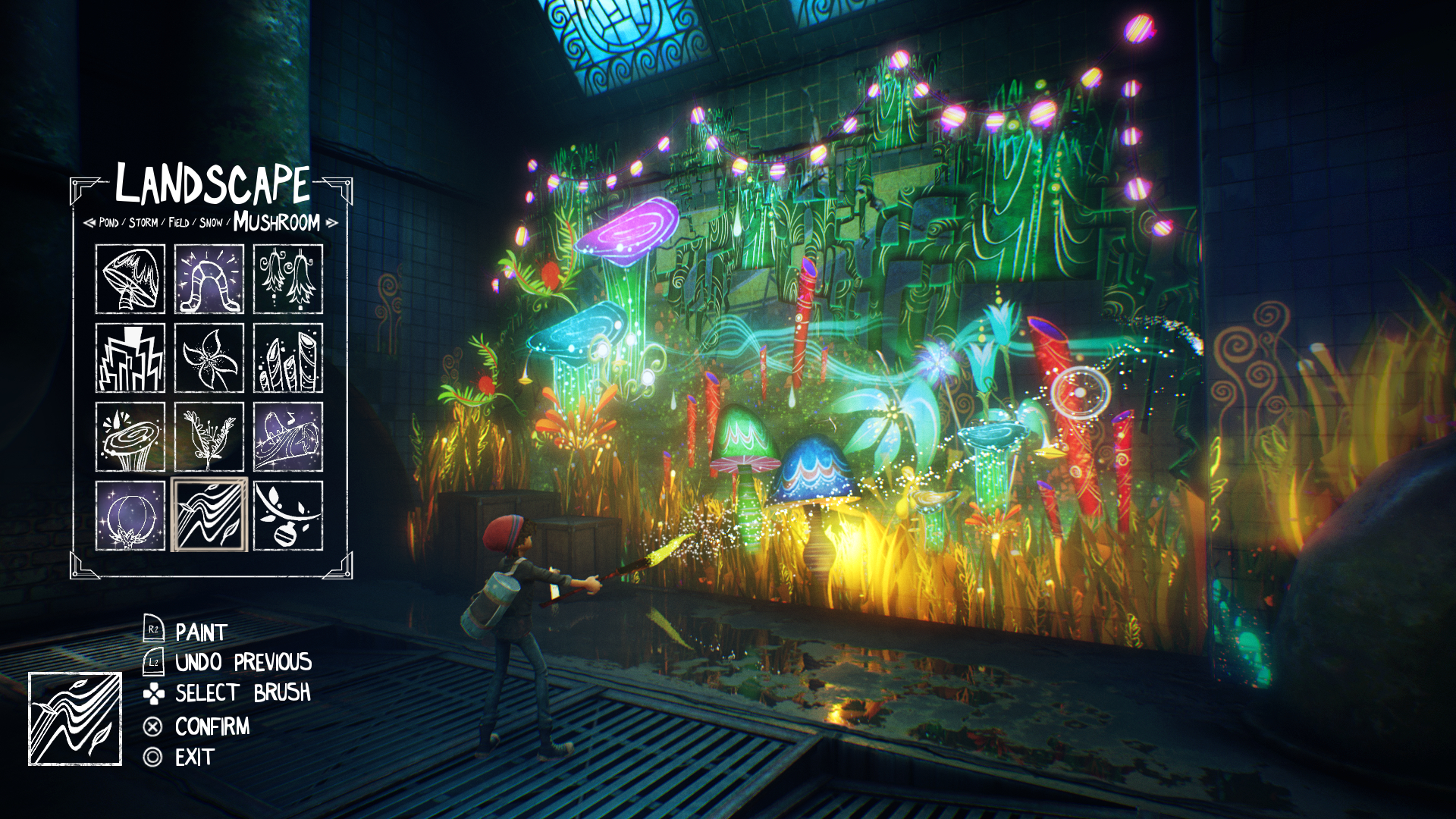 To progress through Denksa, you’ll need to paint enough areas in each of the city’s districts. In practice, this means going into a painting mode that lets you aim your brush with the DualShock 4 controller’s motion control functionality. This took a bit of getting used to, but once I did, I found this rather intuitive. In a way, it feels as simple and satisfying as waving around a wand, only with paint shooting out instead of spells.

Altogether, the game features dozens of different sketches that you can use to embellish your art, such as stars, flowers, trees, moons, butterflies and more. You can also unlock new painting options through pages of Ash’s sketchbook that were torn out by the bullies and blown by the wind.

Your varied toolset extends to the titular genies; you can create a variety of different Monster’s, Inc.-like hairballs with all sorts of ears, horns, tails and the like. Best of all, the game will imbue your genie with the necessary ability to progress through a certain area, like fire to burn away an obstacle or electricity to turn on an elevator. This way, you’re encouraged to be as creative with your genie as possible without having to worry about adhering to a particular design. 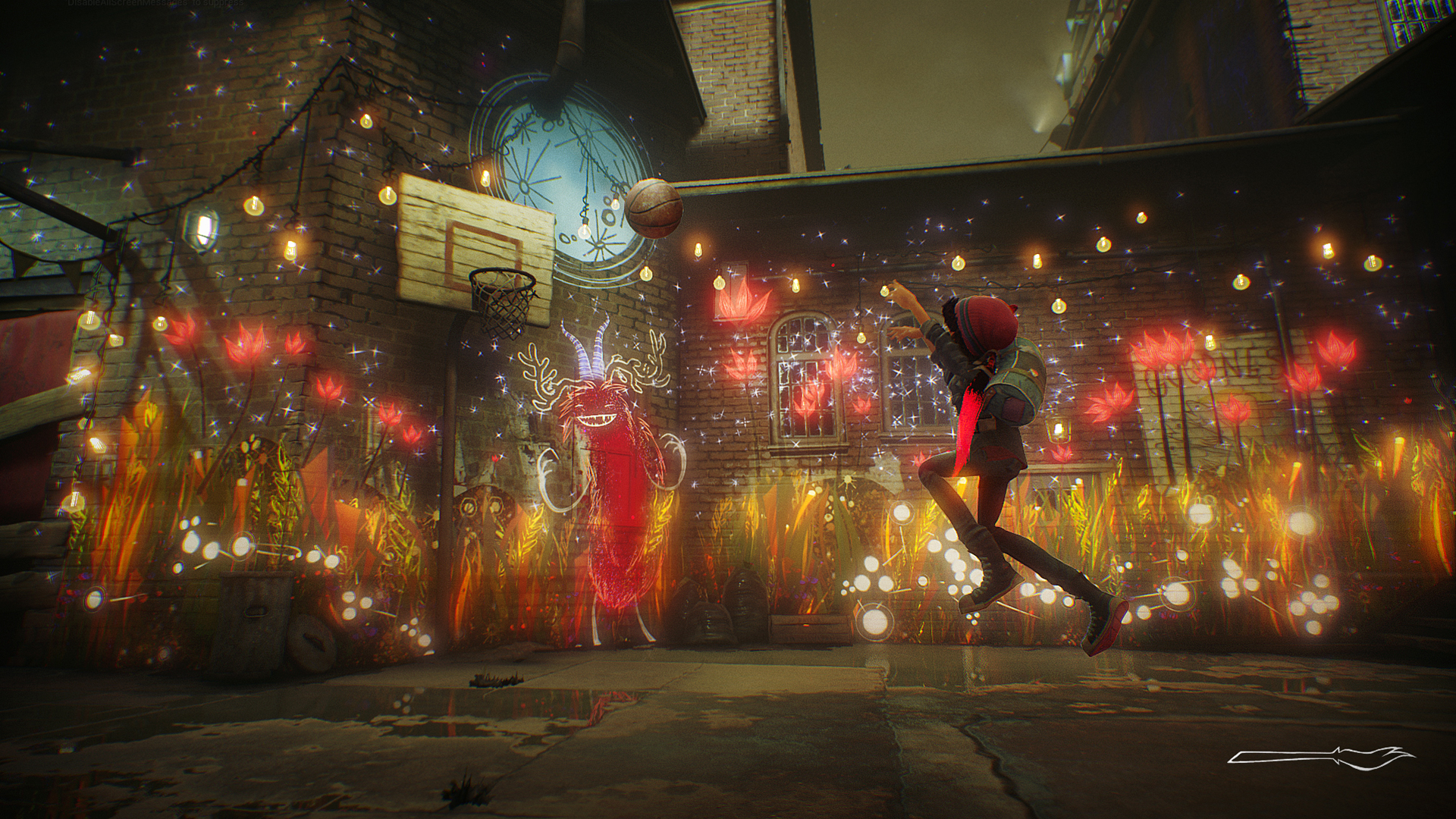 Moreover, while the genies’ primary purpose is to help you progress through blocked paths, they quickly prove to be utterly charming and lovable in their own right. Watching them hobble around enthusiastically, emote expressively and even play little games like basketball with me only further strengthened my attachment to them.

The only obstacle they can’t help you with is the bullies, who hang around in each district and will chase you if you go near them. They’re often in the way of a puzzle element and prevent your genies from following if you’re close, which means you’ll need to lure them away and then circle back.

Should you get caught, they’ll toss you in a dumpster and you’ll need to retrieve your paintbrush. I appreciated that the game doesn’t have an outright fail state, with this punishment serving more as a minor setback — and another pitiable moment — for Ash. While some might take issue with the overall lack of challenge, I loved how this kept the focus on the painting and genies, which are easily the best parts of the game. 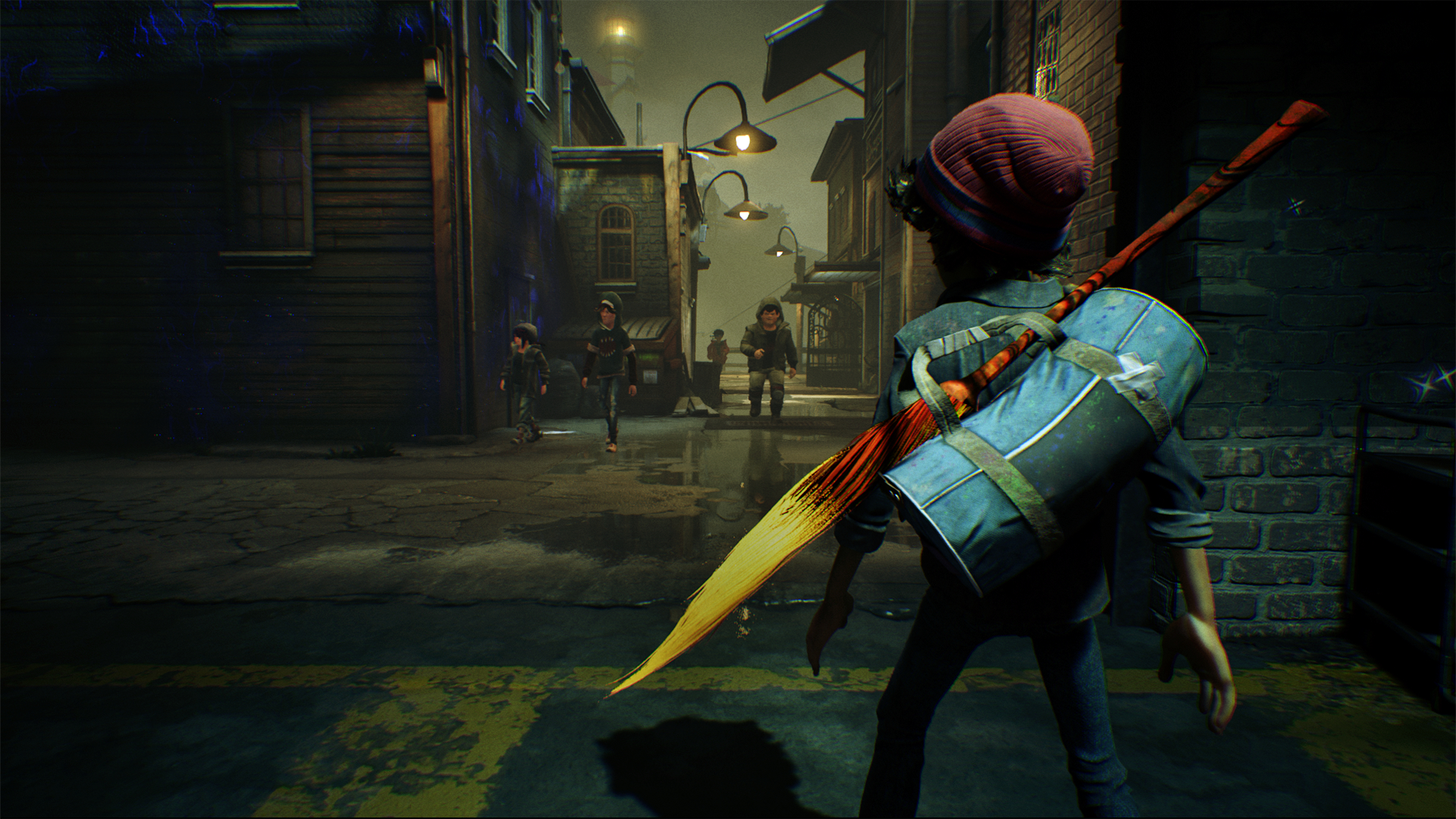 In fact, I was actually thinking to myself while playing that it’s remarkably refreshing for a game to do away with combat altogether and instead focuses on creation and exploration. Unfortunately, this doesn’t last, as Concrete Genie shifts to a darker, combat-heavy third act that puts a damper on the overall experience.

The engrossing painting mechanics are largely abandoned in this section in favour of an action-oriented experience that is too button-mashy and simplistic to feel like anything more than a chore. It’s a shame that the developers felt the need to take such a radical and woefully generic shift in direction — so late in the game, no less — when the central gameplay loop was working so well beforehand.

Thankfully, this section isn’t without merit, as it features some touching story beats. Further, this part of the game cleverly revisits previous areas of the game to show you the effects of your artwork on the environment. Seeing the game remember and maintain the paintings that I had made several hours prior is a brilliant way to reward the player. 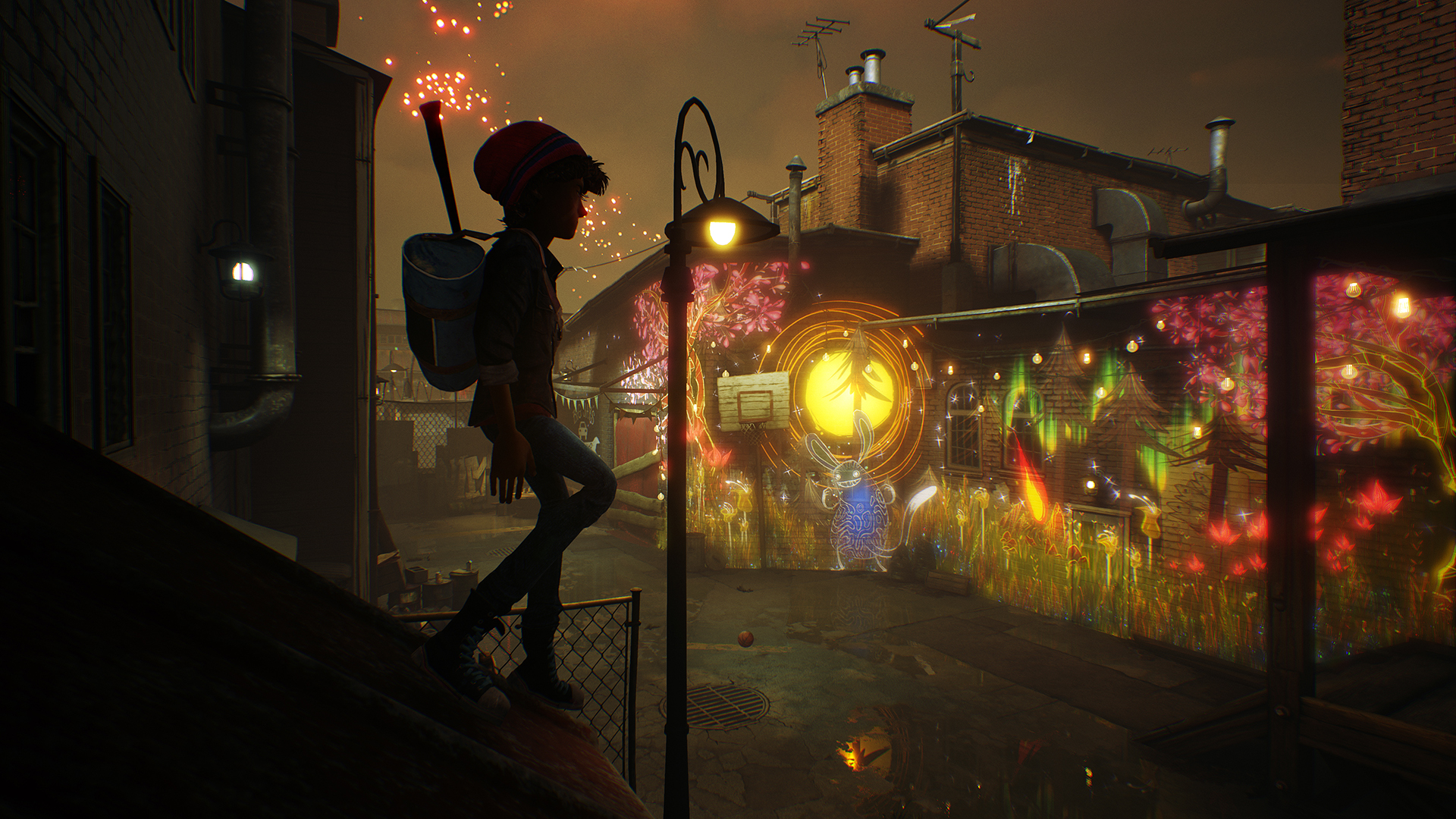 Ultimately, an uneven and uninspired final stretch isn’t enough to undermine everything that PixelOpus has achieved. Even with its relatively short six-hour playtime, Concrete Genie offers a moving and unforgettable experience that celebrates creativity, regardless of skill level. This is one of the PS4’s most unique and enjoyable titles to date.

Note: Concrete Genie has two optional modes for PlayStation VR owners. The ‘VR Experience’ mode draws inspiration from the campaign but is designed specifically with VR in mind. Meanwhile, a ‘Free Paint’ mode lets you paint at will from a unique first-person perspective. Both modes support the PlayStation Move controllers for intuitive motion-controlled painting and are a welcome addition to an already rock-solid experience.