The LeviZen levitates water droplets for $260 [Sticky or Not] 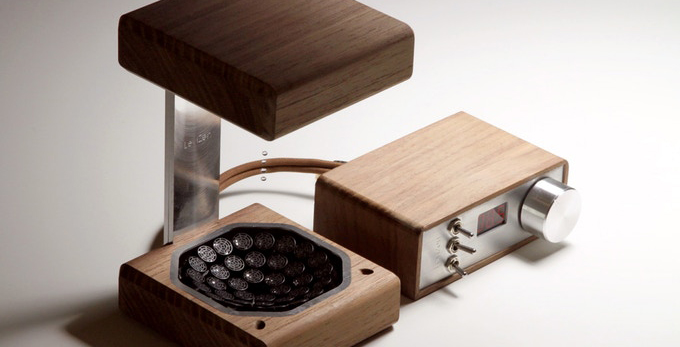 A lot of the time, Kickstarter gadgets put style above function. And the LeviZen Liquid Levitating Machine is certainly one of those gadgets.

But that’s not necessarily a bad thing. LeviZen is essentially the final evolution of a lava lamp; the most badass lighting fixture you could own, and a surefire conversation starter.

And the science behind it is really, really cool.

It levitates water using two identical sound waves that travel against each other to create a “standing wave.” This wave has places on it that don’t move at all — LeviZen calls them nodes. When a water drop is placed at one of the nodes, it’s trapped there moving parts of the wave beneath and above the node. Voilà, levitation!

Plus, there are two spot LEDs in the base of the levitator that can light up the levitating drop so it glows like a tiny sun.

Beyond the obvious wonderment that inspires, the design of the levitator isn’t half bad, either. The team behind LeviZen, Simplistyk, designed the gadget in the retro-chic style of many hipster audio gadgets.

It’s made of walnut wood and aluminum, and the creators decided to put all the electronics in a separate but connected box, which has three toggle switches for power, light and moving the water drop up and down while it’s levitating. The knob, meanwhile, controls power level and the display shows that level. Higher power levels are needed the denser the liquid.

The LeviZen currently costs $260 CAD on Kickstarter and is estimated to ship by July 2018.

You know the weird home items you purchase in The Sims after you use a cheat code to make yourself rich? That’s what the LeviZen Liquid Levitating Machine is — it even sounds like a made up Sims doodad.

Naturally, yes, I’d love to have one, but I have yet to find a cheat code that will fill up my bank account. So for now, I’m going to stick with my lava lamp.