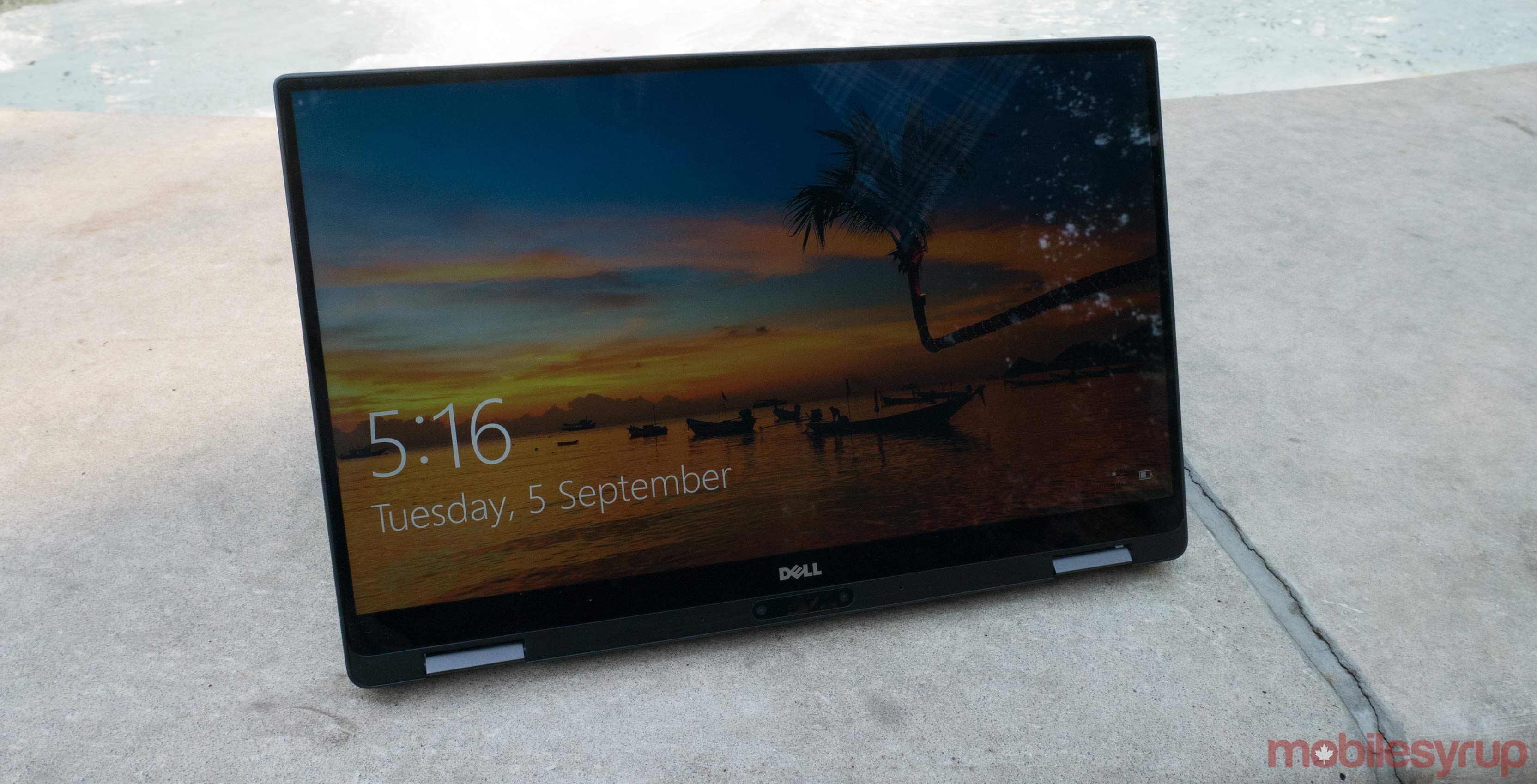 The 2017 Dell XPS 13 9365 is a small, lightweight 2-in-1 that delivers a solid laptop experience. If you’re looking for a laptop that’s able to get out of the pricey MacBook Pro’s shadow in terms of design, Dell’s latest laptop offering is definitely a device worth considering.

The above specs are impressive, especially for such a small and thin laptop package, so I wasn’t surprised that Dell’s latest 2-in-1 amounts to a great device. 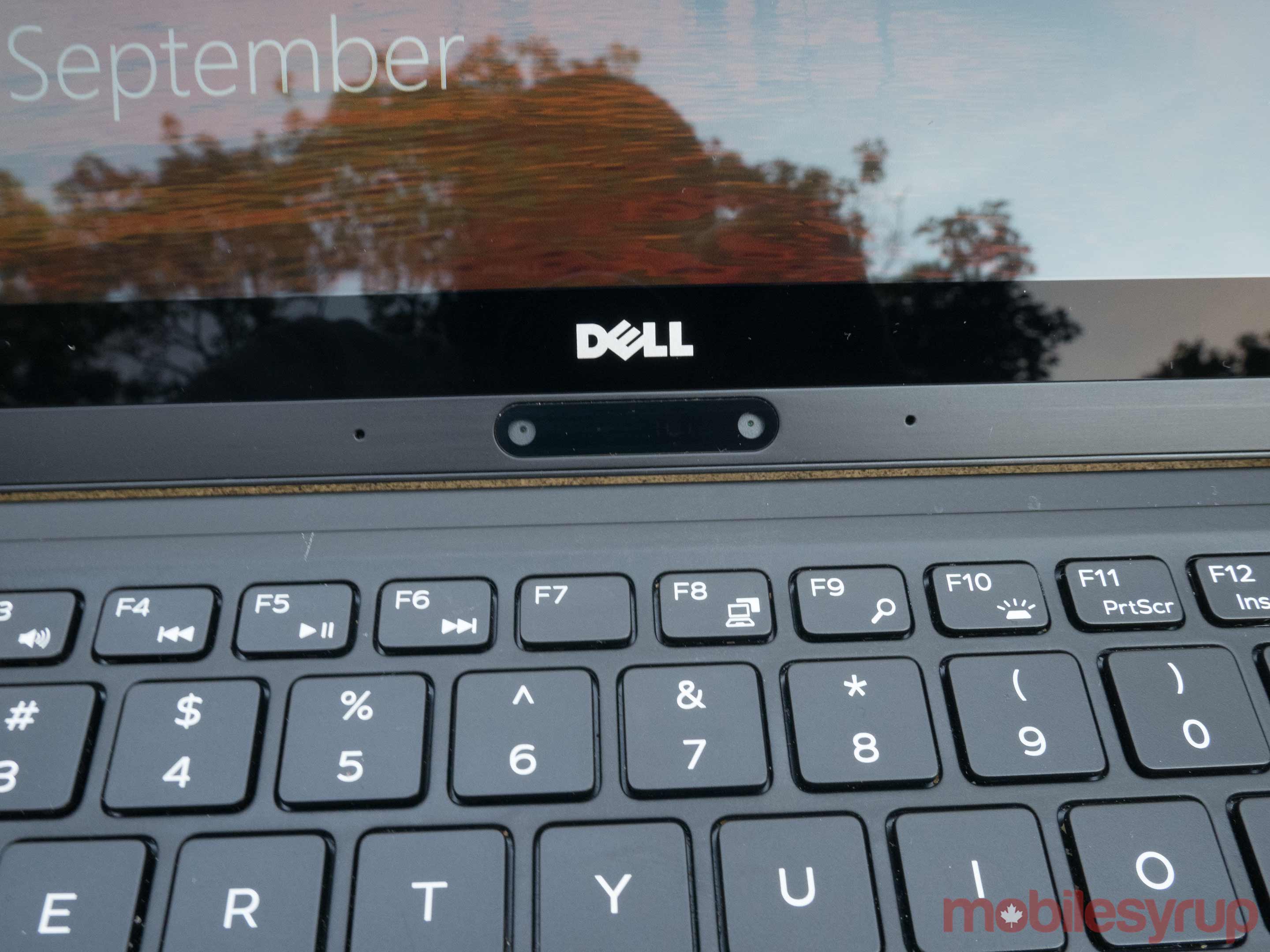 Lets start with the XPS 13’s InfinityEdge Display. Like the many of the more recent smartphones that have hit the market market — for example the LG G6 and the Essential Phone — the XPS 13 features minimal bezels on its display.

The XPS 13 also feels incredibly light. The laptop weighs 1.24kg or 2.7lbs, a seventh of a pound heavier than the newest 12-inch MacBook. When the laptop is in my backpack I can barely feel it and I often do a double check just to make sure the device is in my bag. One of the factors of the laptop’s weight is its small package, which measures in at 199mm x 304mm ( 7.98 x 11.04 inches), making it only slightly larger than Apple’s MacBook.

For the most part, the Dell XPS 13 is a snappy device, as it takes less than a second to boot up from rest mode. When the laptop is turned off, I find it takes about eight seconds to boot up, and four seconds after unlocking the device.

During my day-to-day usage, which includes switching between multiple apps like Photoshop and Lightroom to edit and view photos, and scouring the internet with multiple Chrome and Edge windows open, I found the laptop was typically speedy and I rarely ran into instances of lag.

Sometimes I found that if I powered the device on for too long, or had too many pictures open on my desktop, the XPS 13 slowed down, though it’s likely I would have run into this issue with any laptop — this issue wasn’t unbearable though.

As expected, I found restarting the laptop, letting it update, or clearing the pictures from my desktop helped combat this issue. The XPS 13’s quick speed is due to its 7th Generation ‘Kaby Lake’ i7 processor and ample 16GB of RAM. Note: the stock variant only comes with 8GB of RAM, 128GB of Solid State Storage, and an i5 processor. 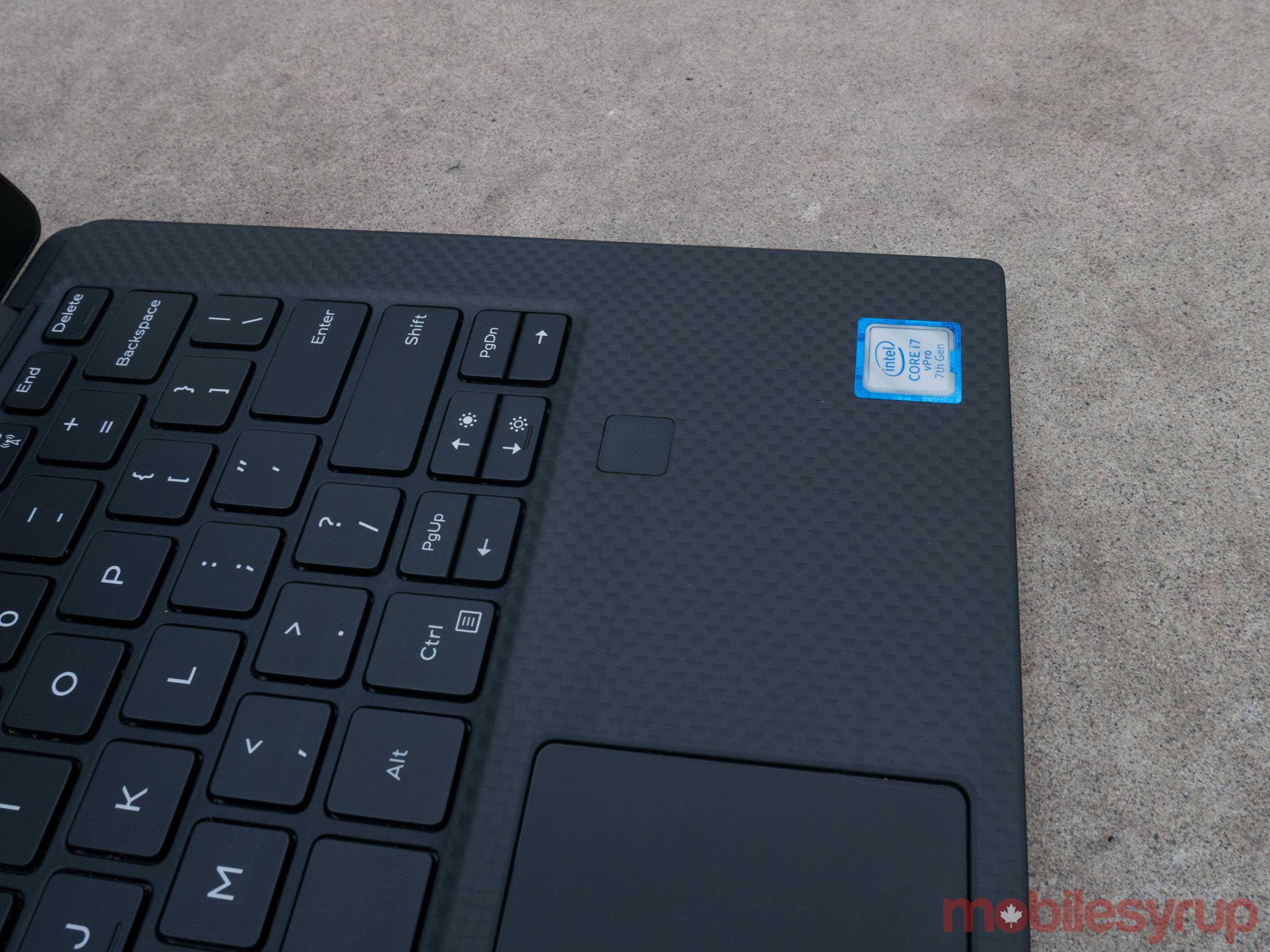 In this particular case, the Dell XPS 13 includes a fingerprint sensor, though it’s unfortunately not as accurate as I hoped it would be. During my experience with the device, I encountered instances where the laptop wasn’t able to recognize my fingerprint, forcing me to opt for either a pin or a password.

However, when Windows Hello did actually function properly, the login process was quick and painless.

The XPS 13 contains a primary 4 cell 46Whr battery. A 46Whr rating means that a user can get 46 watts per hour with the device. For reference, 46Whr at 7.6 voltage converts into a about a 6,053mAh battery.

During my day-to-day with the XPS 13, I often edit photos with Photoshop, write a number of posts for MobileSyrup with Google Chrome, listen to music with Google Play Music, and have my brightness on the highest settings.

With me doing all of those tasks, I found the battery lasts at the very longest four and a half hours. When I’m using power more conservatively, though — for instance not using the highest brightness settings or not listening to music — I found the 46Whr battery would last nearly six hours in some cases. 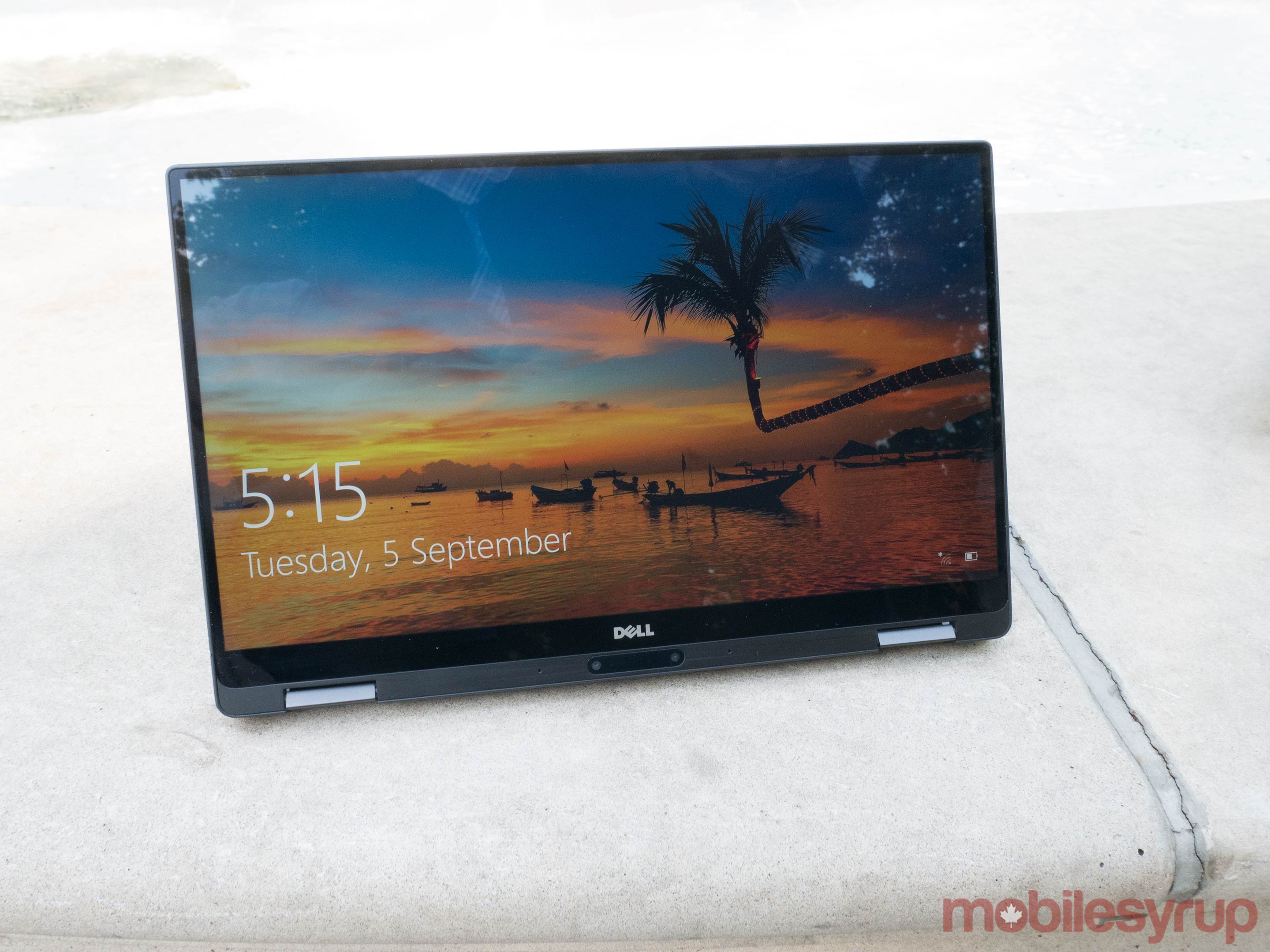 The Dell XPS 13 is a 2-in-1 that actually works as a 2-in-1. Having used a HP Spectre for the past couple of years, I found that I never actually used the tablet mode. In tablet mode I found the device was too large to hold comfortably.

To turn the Dell XPS 13 into a tablet, the user needs to keep pushing the display back to almost 360 degrees. When this happens the keyboard and touch pad deactivate and the laptop goes from desktop to tablet mode.

During presentations at school I would use the 2-in-1 function and quickly get tired as holding a device with such a large screen became cumbersome. The XPS 13 also has a 13-inch display and is actually one tenth of a pound heavier than the HP Spectre. However, due to its small package, I found it was no problem to use the laptop as a tablet. At least once a week I use the device as a tablet and it’s never much of a bother.

In general, using tablet mode can be a frustrating experience as sometimes the change back into desktop mode lags a bit, though this has only happened a couple of times during my usage of the XPS 13. 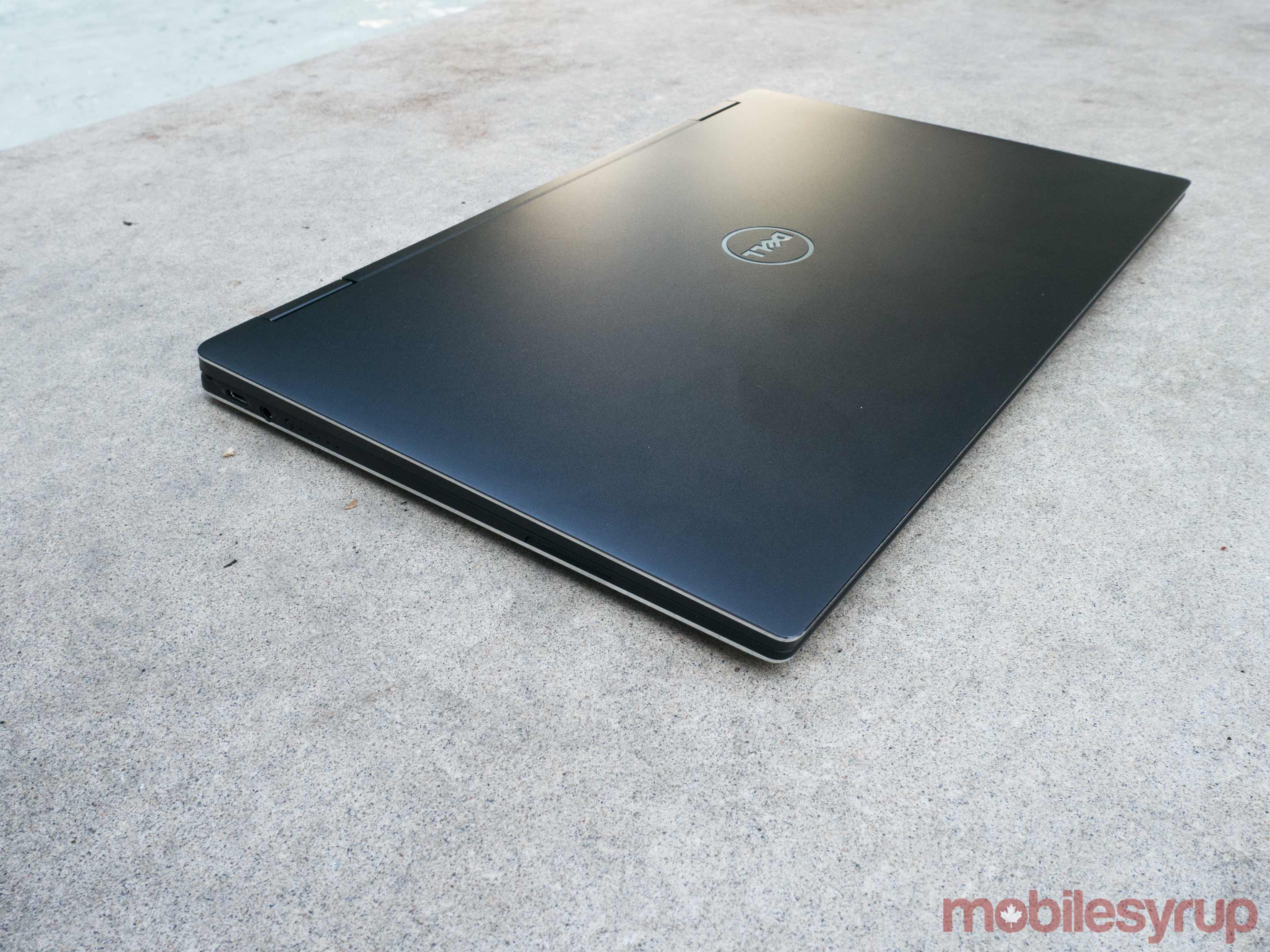 Typing on the XPS 13 is a delightful experience. The laptop has a deep stroke depth, giving it a cushy feeling when typing. The keys also have plenty of space in between them, making for less mistakes and there’s a soft finish around the keys so users can rest their wrists beside the touch pad.

Additionally, the touch pad allowed for smooth movement and the mechanic clicking experience was satisfying when in use.

The 1920 x 1080 pixel display is clear and while not vibrant, the blacks were sufficiently dark, individual pixels were impossible to make out, and there is no easily detectable light bleed.

With 400 nits of brightness, however, it was difficult to see the display in very bright conditions. 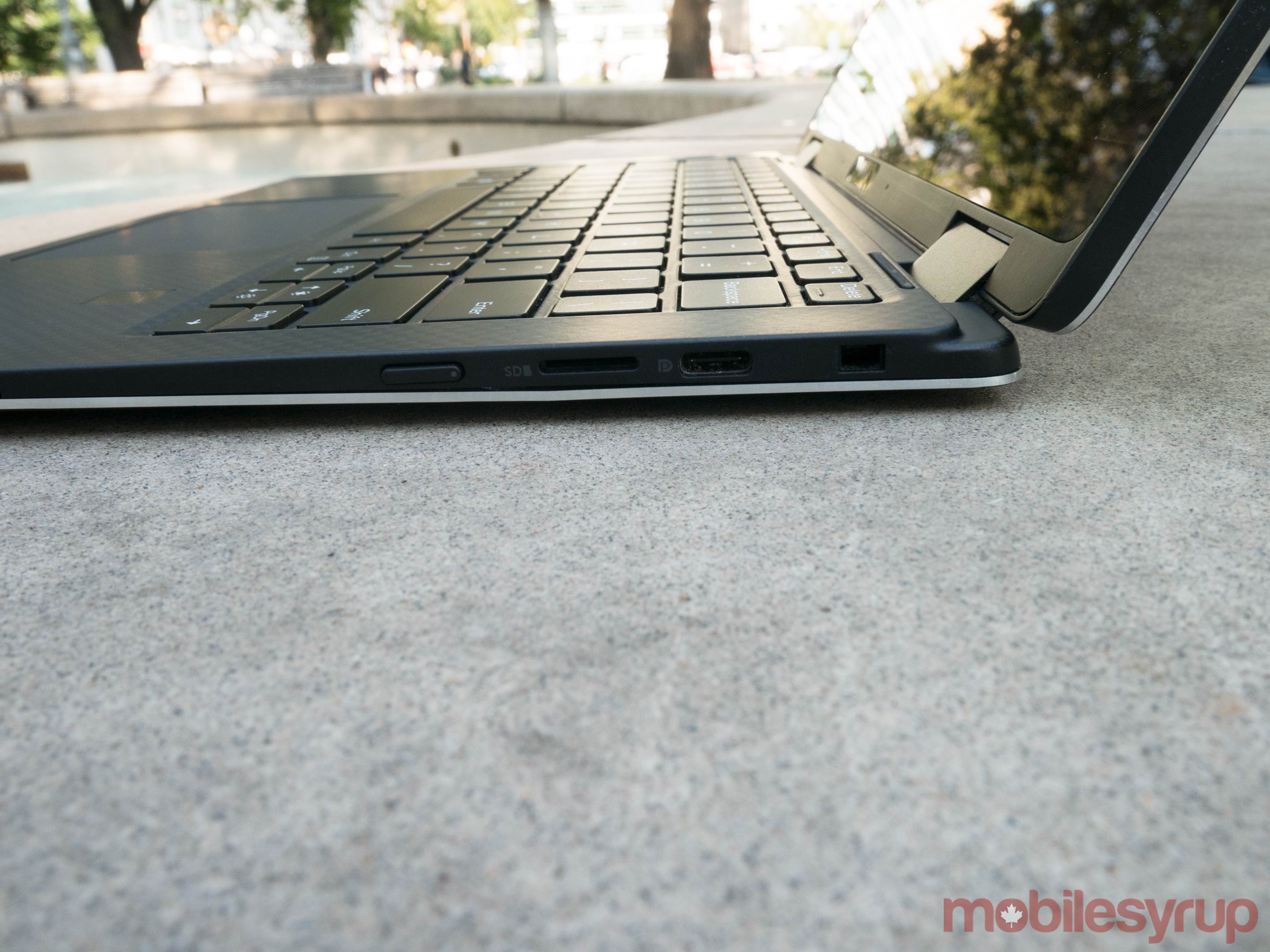 The laptop’s lack of USB ports is the most frustrating issue I encountered during my time with the Dell XPS 13. The device features a standard 3.5mm headphone jack, USB-C charging port, an off button, a noble lock slot, MicroSD Card reader and 1 Thunderbolt 3 (4 lanes of PCI Express Gen 3) with PowerShare & DC-In. I found the lack of an USB-A charging port frustrating and when using a USB-C to USB-C cable, I still wasn’t able to charge my various USB-C smartphones.

Another problem I had with the XPS 13 is on several occasions I found that the device would be too hot for me to rest comfortably on my lap. Though I don’t have an exact temperature, the device was warm enough to feel through a blanket or even pants.

I once had the device overheat to an extreme level after leaving on while it was downloading a game, forcing me to restart and allow the XPS 13 to cool down.

Generally, I found it would heat up after about two hours of use, and quicker while charging.

Last but not least in my list of issues is the price of the laptop.

The configuration that I reviewed is priced at $2399.99 CAD which is expensive compared to other 2-in-1 such as the Microsoft Surface Book, Lenovo’s Yoga ThinkPad 260 and the HP Spectre x360.

The XPS 13 is worth considering

The Dell XPS 13 is a lightweight laptop that features a variety of high level specs, depending on the variant you purchase. With its InfinityEdge, fingerprint sensor and quick and speedy processor, the Dell XPS 13 gave me an overall good, dependable experience.

For the most part, I didn't have any serious issues, except for that one point when it overheated, the occasional lag when too much of its RAM was being used and when switching back and forth from tablet mode.

However, its light weight exterior made carrying it around effortless, and it received many of Windows updates, including the Creators updates, without me having to do anything. Additionally using the fingerprint sensor was refreshing, as this was my first Windows Hello device, even though I sometimes ran into problems. The screen was clear and vibrant which was especially noticeable when editing pictures in Photoshop or watching videos on Netflix.

Plus one of my favourite things about the experience was just how nice it felt to type on the device, though I might have wished for a larger touch pad, after using the HP Spectre.

With its high price I can see how many people would like to stay far away from the Dell XPS 13, though Apple's contenders feature a similar price tag.