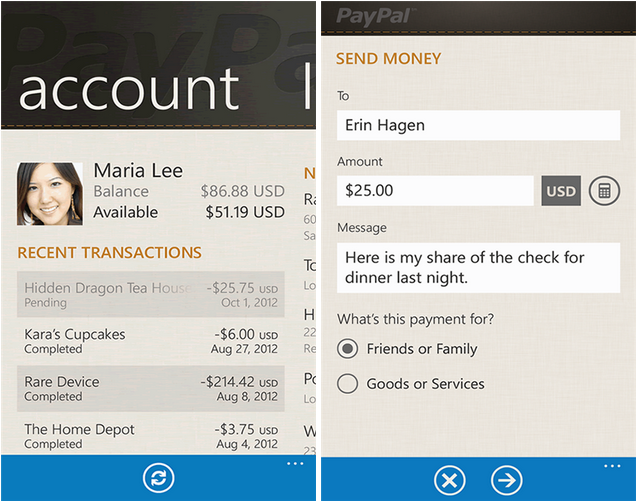 The Windows Phone Marketplace has traditionally been an afterthought for many top brands. Many apps we take for granted on iOS and Android are either absent or neglected, and while there are decent alternatives from independent developers, some functions are not reproducible through APIs.

PayPal is one such example of a brand sorely missed over the past two years. But the company, in the run-up to Windows Phone 8’s release, has outed an official app with the help of Nokia. Despite the OEM’s assistance, the app is available for all branded Windows Phones, and comes with the majority of the functionality we take for granted on its other mobile platforms.

You can send and request money, as well as see your current balances and transactions. You can also withdraw or transfer money to and from your bank accounts, a feature missing from the recently-revamped Android app. The Local feature allows you to find stores and merchants who use PayPal Here, the company’s new mobile payment service.

The app is finally available in Canada and you can download the app from the Windows Phone Marketplace.