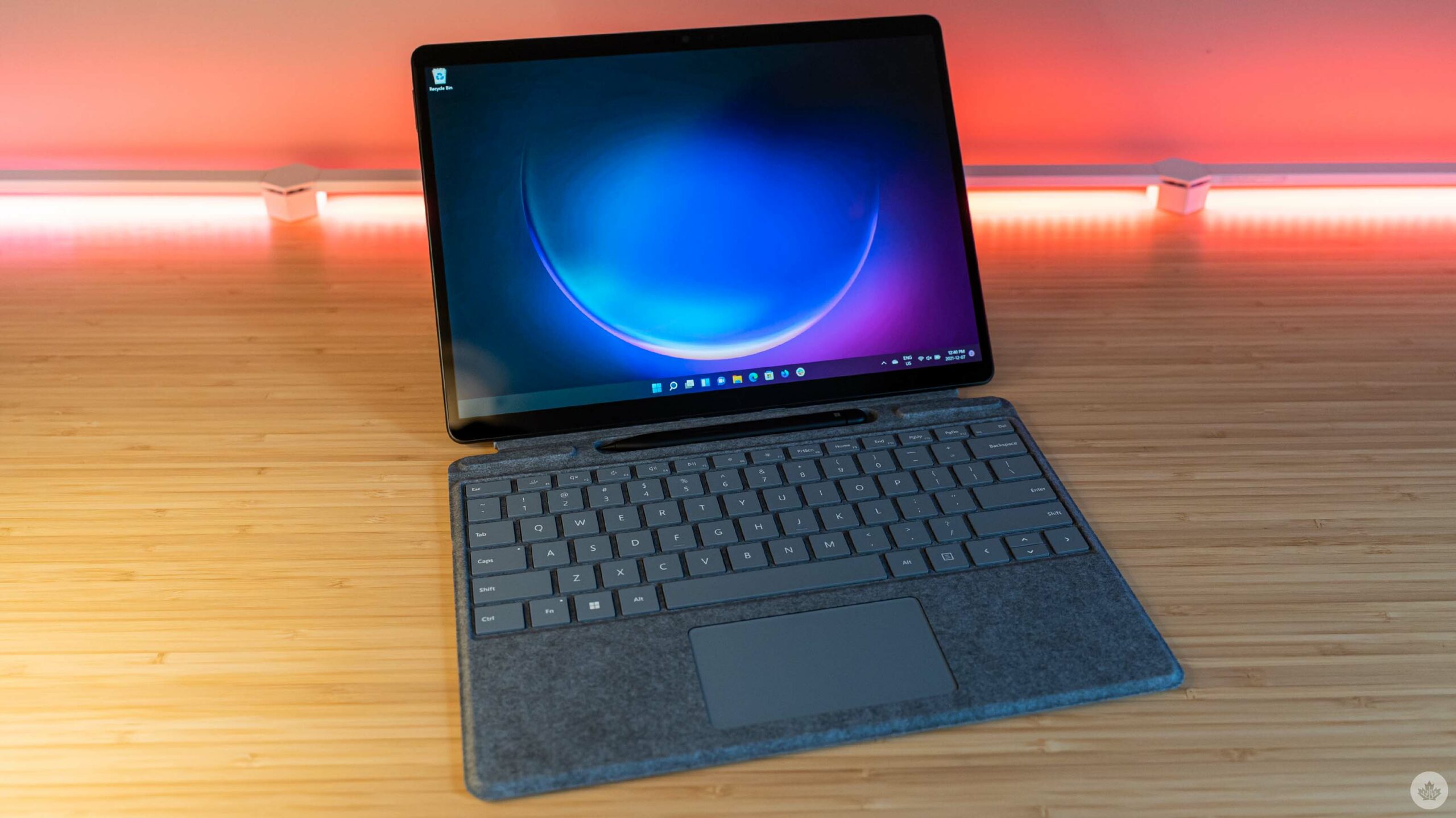 Microsoft’s Surface Pro 8 is perhaps the most boring hardware the company released this year, save maybe the Go 3. Beyond a minor design update that ushered the 2-in-1 into a more modern look reminiscent of the ARM Surface Pro X (that also sort of unified Microsoft’s Surface accessories) and a spec bump, there’s not much to be excited about with the Pro 8.

For fans of Microsoft’s Surface line, there’s nothing to complain about here, except maybe that those coming from an older Surface Pro might need to buy new accessories for the Pro 8. It’s the same tried-and-true form factor (like it or not) with several welcome improvements.

To be frank, I’m squarely in the camp of ‘not’ when it comes to the Surface Pro line. At the risk of sounding old, I have almost never found myself in a scenario where I preferred the Surface Pro form factor to a traditional clamshell laptop. That said, I can appreciate the appeal of and respect what Microsoft’s done with the Surface Pro line, especially since most other Windows PC-makers have yet to make a comparable device that’s also as good. 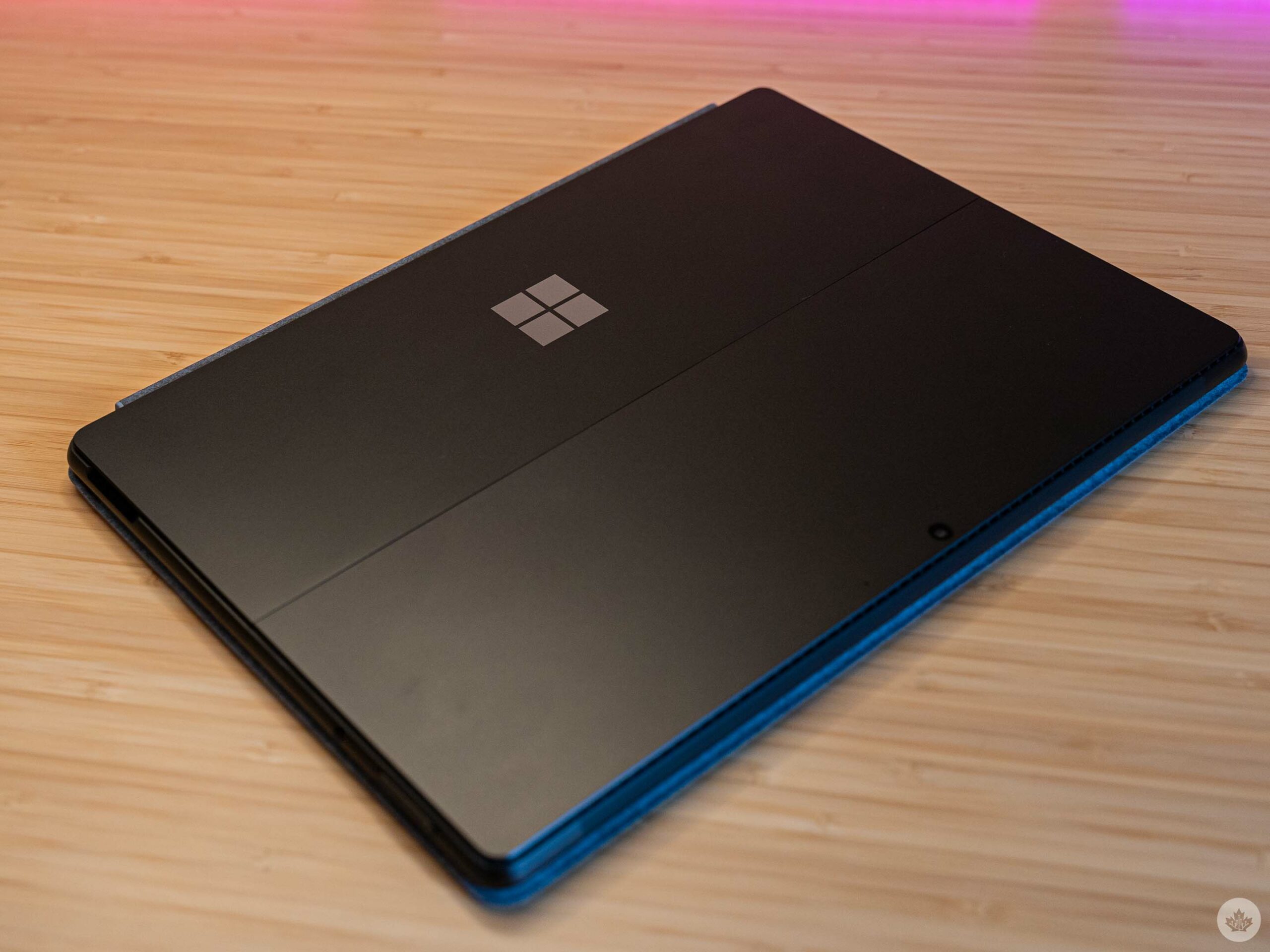 Note: The above specs are for the Surface Pro 8 model I reviewed. You can view a full breakdown of specs here.

Intel in a Qualcomm body 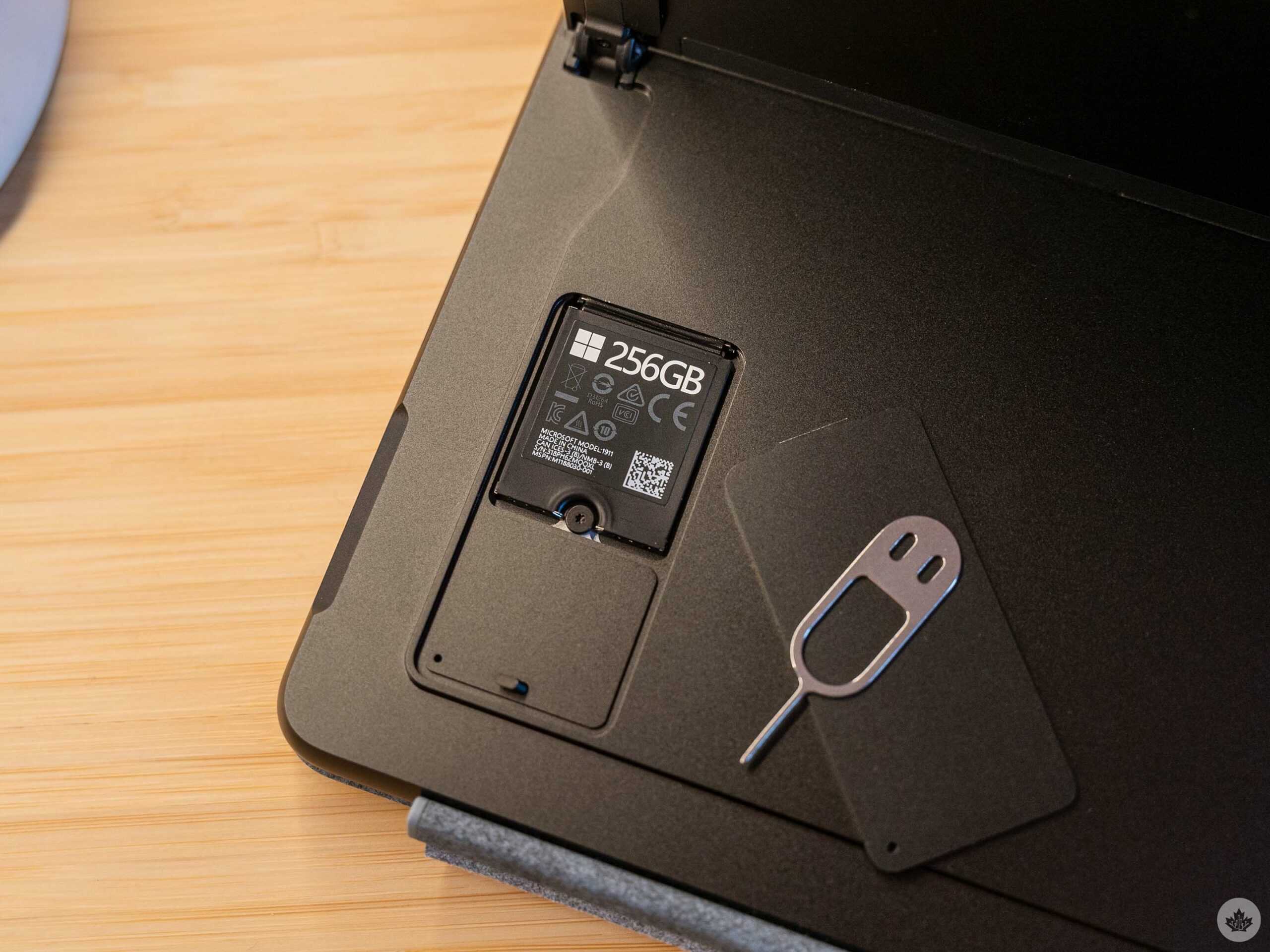 The Surface Pro 8 feels more like Microsoft’s Surface Pro X than it does the Surface Pro 7. The dimensions are the same, save for thickness (the Pro 8 comes in at 9.3mm compared to the Pro X’s 7.3mm).

To be fair, the Pro 8 isn’t significantly different from the Pro 7 and actually measures slightly thicker than the 7’s 8.5mm — but thickness doesn’t matter as much as appearance.

At first glance, you’d be forgiven for thinking the Pro 8 is a Pro X. The new Surface Pro ditches the boxier look of the Pro 8, shrinks the bezels and squeezes in a slightly bigger 13-inch display (matching the size and resolution of the Pro X, but clocking in slightly larger than the Pro 7). 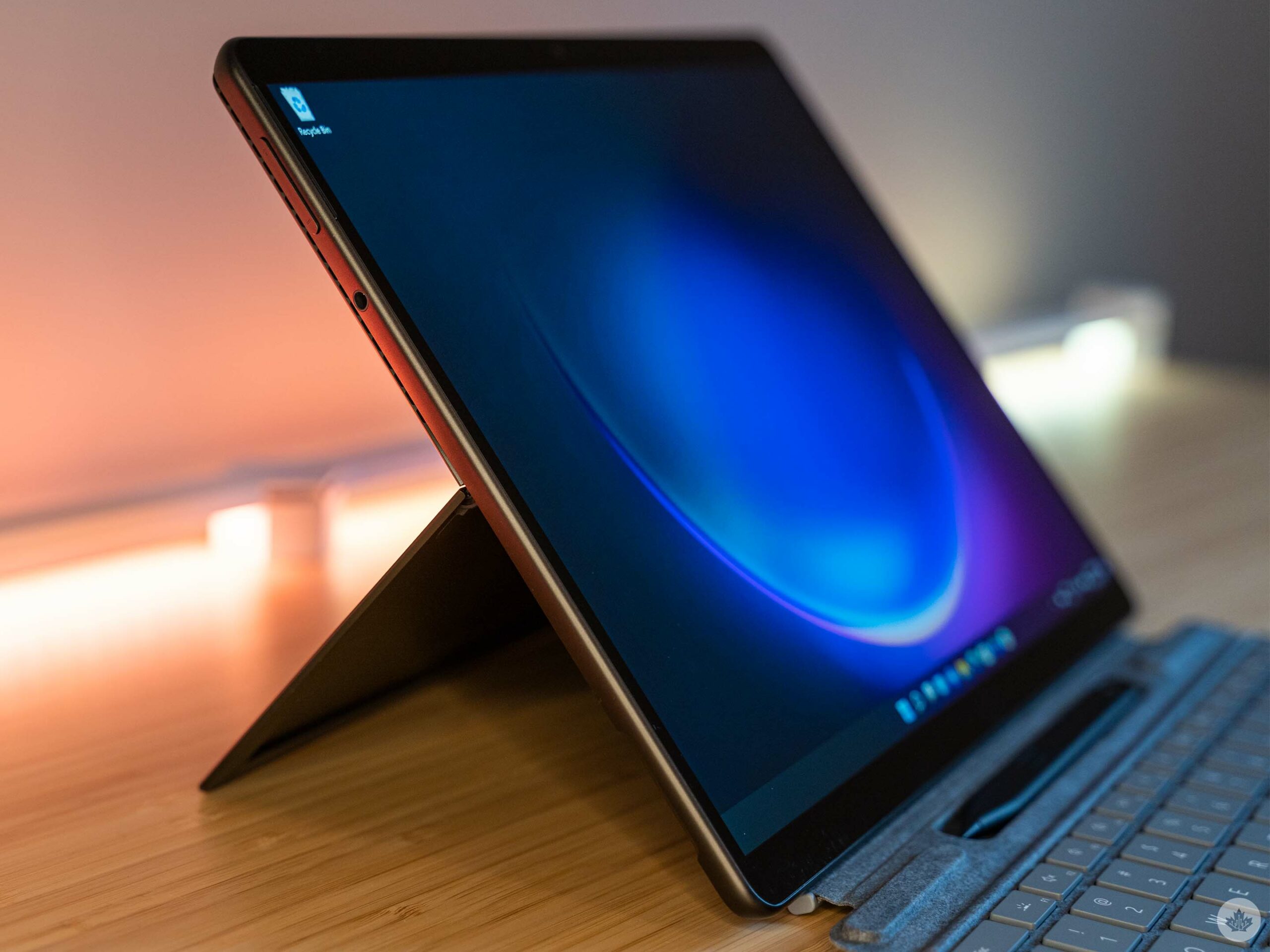 These are all really small changes, however, and likely won’t stand out unless you look for them. I spent longer than I’d like to admit reading a compare page between the Pro 8, Pro X and Pro 7 to see what was actually different beyond the internals (which I’ll dive into shortly).

Ports is one area with a big change. The Pro 8 features two USB-C ports with support for USB 4.0 and Thunderbolt 4. Depending on what accessories you rely on, that might be a downgrade from the Pro 7’s single USB-C and USB-A ports.

Finally, there’s a slightly improved 10-megapixel rear camera, which won’t matter unless you’re an avid tablet photographer, Bluetooth 5.1 instead of 5.0 and finally, the display. 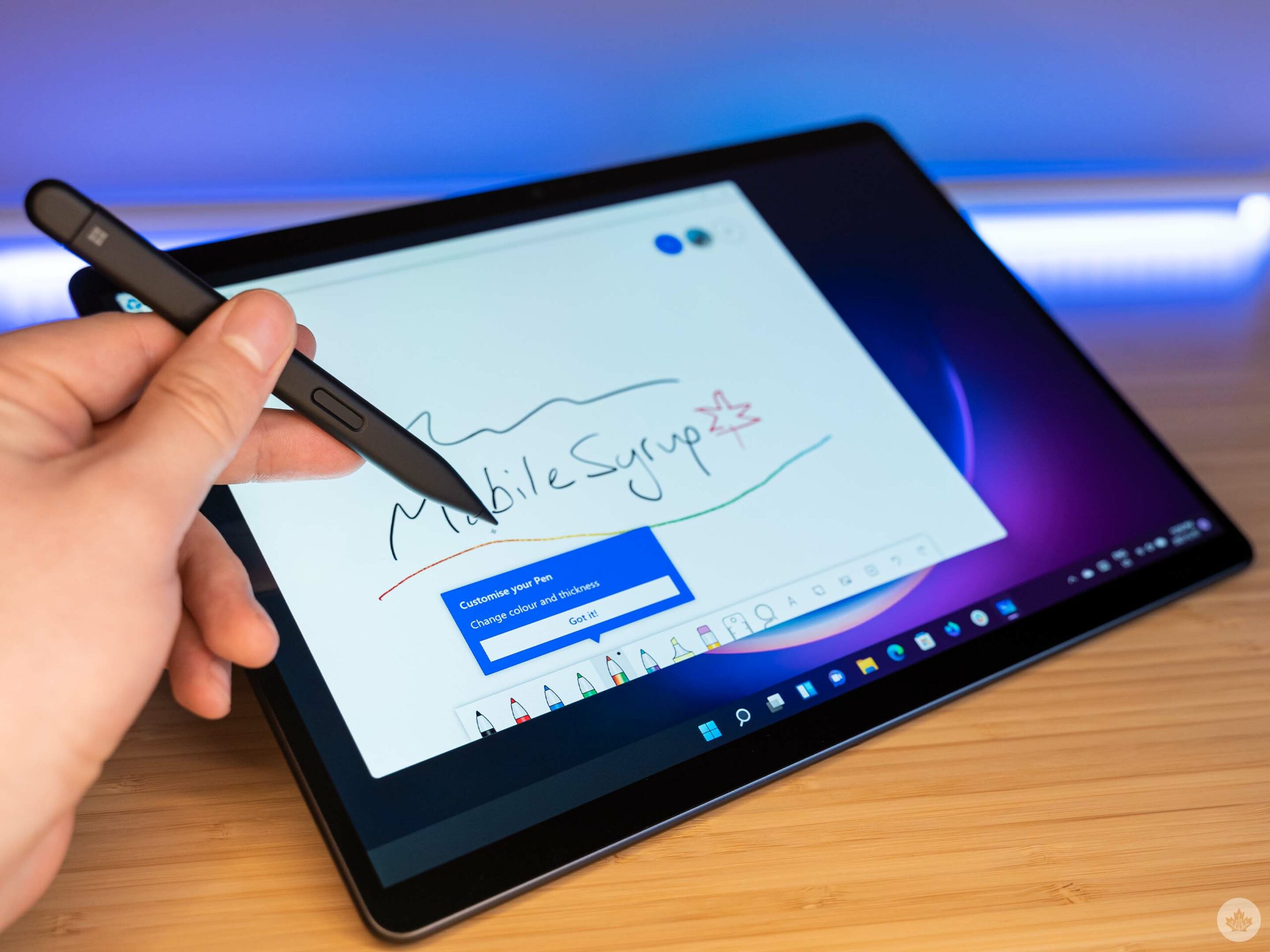 Microsoft equipped the Surface Pro 8 with an excellent 120Hz display, although unfortunately, the device ships with the display set to 60Hz by default. It’s not a big deal since you can just turn it on, but it’s a bit silly that Microsoft disabled arguably the Pro 8’s main new feature out of the box.

Plus, when I ran my suite of benchmark tests, I found virtually no difference in performance (the Pro 8 at 60Hz scored a few points better than when set to 120Hz on most tests, but the difference was well within the margin of error). Also impressive was that the 120Hz display didn’t seem to have a significant impact on battery life, with my testing suite draining the battery from full to about 76 percent when running the Pro 8 at 60Hz and at 120Hz. Given the minimal impact on performance and battery life, it’s even more puzzling that Microsoft ships this headline feature disabled out of the box.

To turn on 120Hz, you’ll need to open the Settings app > Display > Advanced Display and select the 120Hz option under ‘Choose a refresh rate.’ 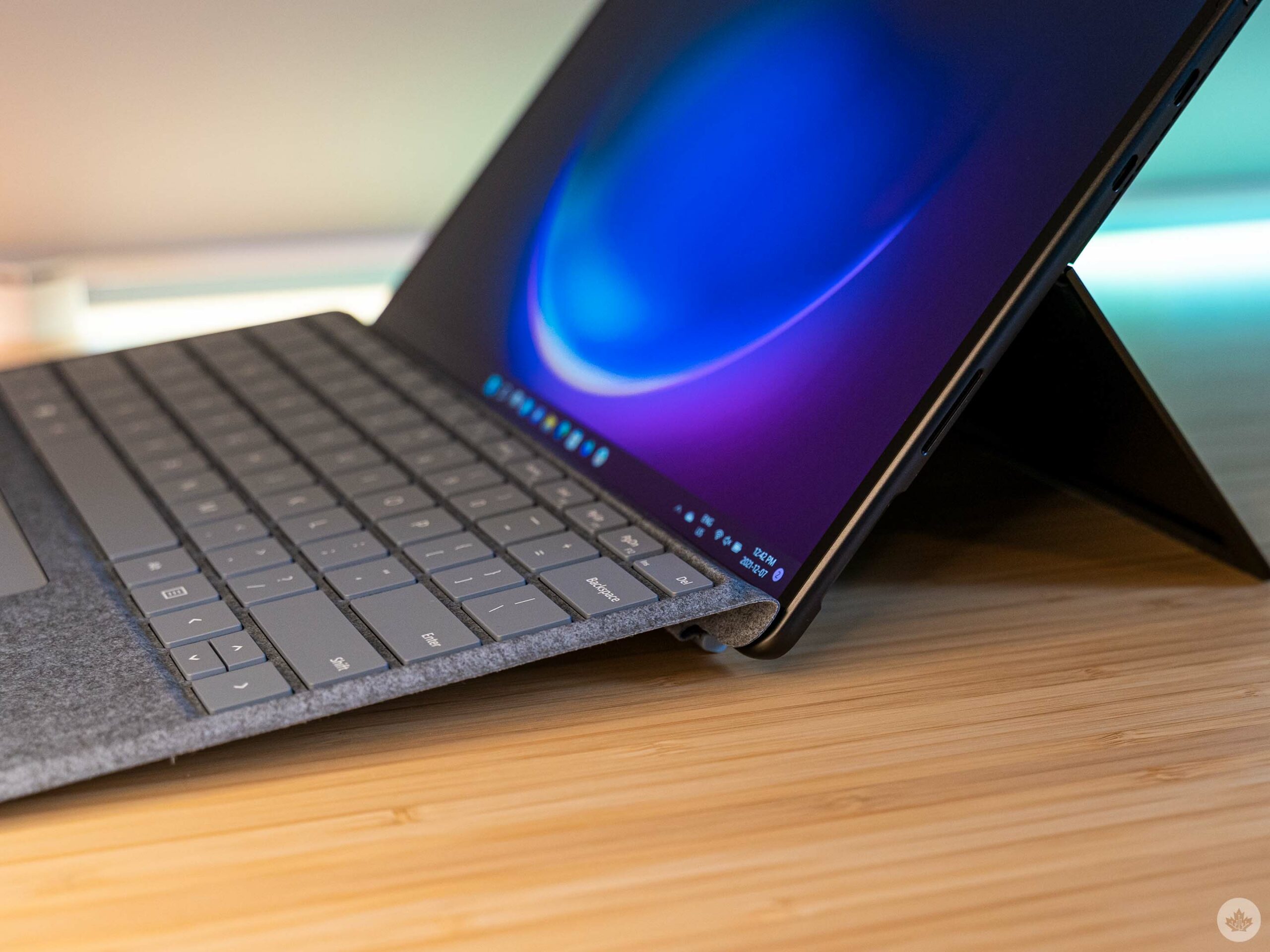 Unfortunately, I have little else to say beyond that the display looks superb. It’s the same 3:2 aspect ratio I love on Microsoft’s Surface hardware, boasts excellent colours and looks quite sharp. The 120Hz feature takes the Pro 8 screen to the next level by making the whole device feel smoother and snappier.

As much as I like the display, I do have an issue with it — the auto-brightness can throw the saturation completely out of whack. I notice this most often when I wake up the Surface Pro 8 from sleep. If the brightness is significantly different from before I put it to sleep, the auto-brightness will adjust and almost always oversaturates the screen, blowing out bright colours and making everything look wrong. 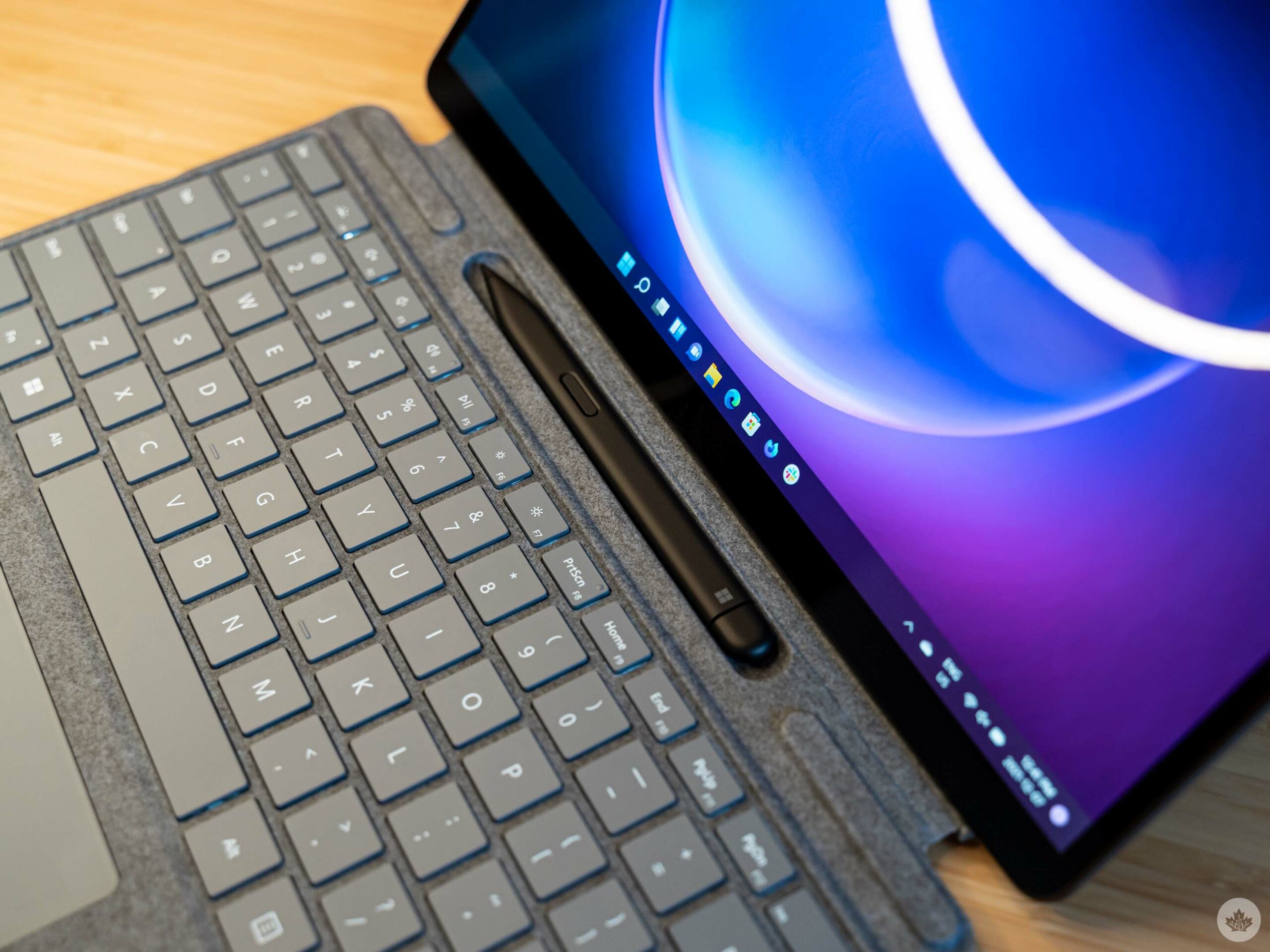 Turning off the ‘Adaptive colour’ setting under the ‘Display’ menu in the Settings app seemed to fix this for me. My guess is it’s a software bug that Microsoft can (and hopefully will) fix in the future. Interestingly, MobileSyrup managing editor Patrick O’Rourke noted a similar problem with TrueTone on Apple’s Mac computers.

It’s definitely not a deal-breaker and the Surface Pro almost always fixed the screen within a few minutes of going funky, but it was still annoying to deal with. 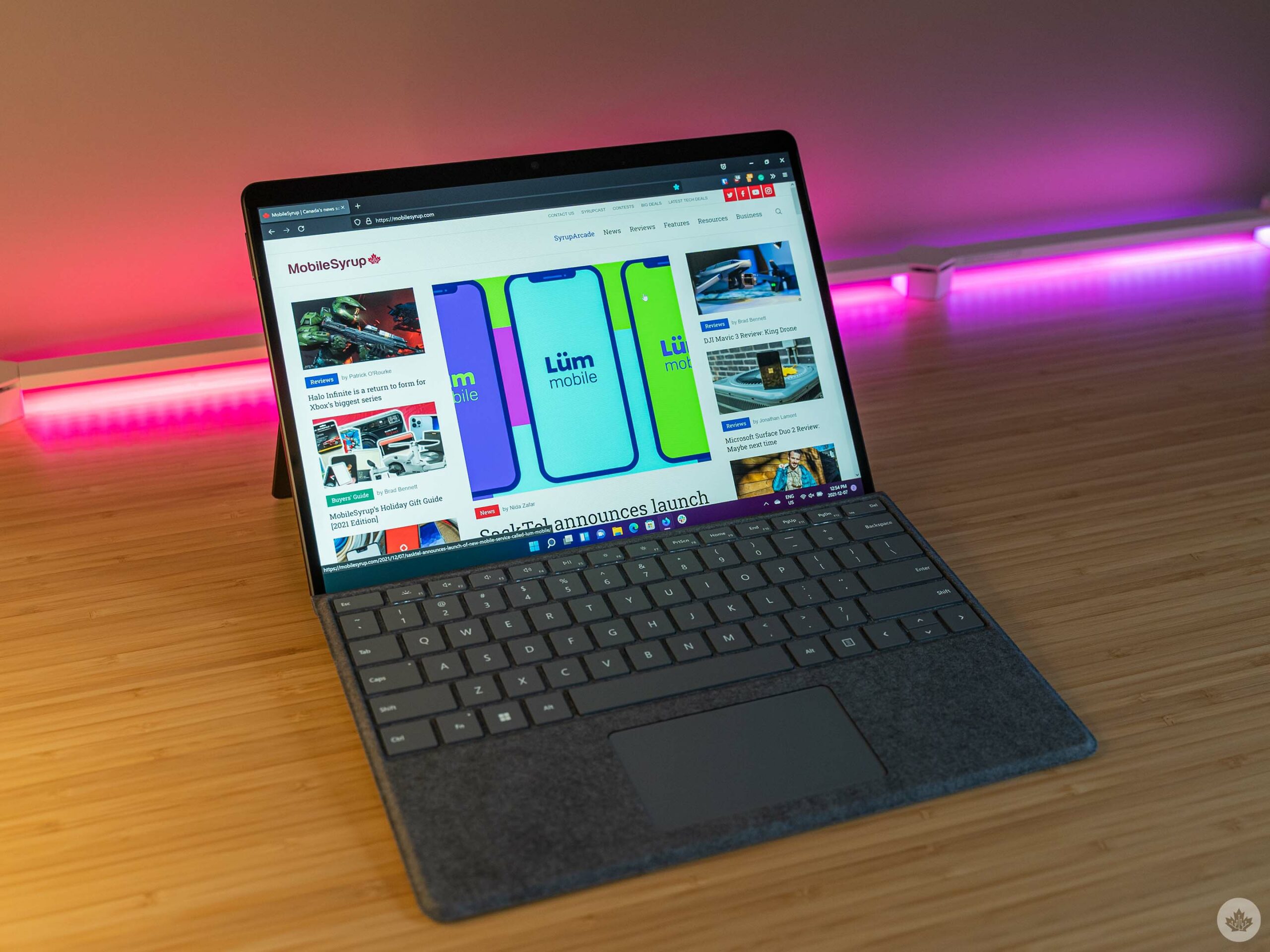 The Surface Pro 8’s performance is good and, I could probably leave it at that. But I won’t.

Here’s the deal with the Surface Pro (and laptops with similar form factors): the performance will always be fine. At least, it will be until we start seeing Apple M1-level performance out of ARM chips for Windows and a general improvement to Windows on ARM.

The former probably won’t happen for a while, thanks in part to a reported exclusivity deal between Microsoft and Qualcomm. Speaking of Qualcomm, the company claims it will have next-gen chips in 2023 that can take on Apple’s M-series CPUs. In other words, it’ll be a few years before we might get something competitive from Qualcomm. Should the reported exclusivity deal come to an end soon (as rumour suggests), maybe other manufacturers will offer ARM-based chips worth using, but that remains to be seen.

For now, the Surface Pro line still uses Intel chips (or the Microsoft-Qualcomm joint special SQ1 and SQ2 ARM-based chips featured in the Pro X line). There’s nothing wrong with using Intel chips, but despite the company’s best efforts, its CPUs still struggle without ample power and thermal management. Put another way, when you let the Surface Pro 8’s 11th Gen Intel i7-1185G7 really stretch its legs, your battery life will suffer. 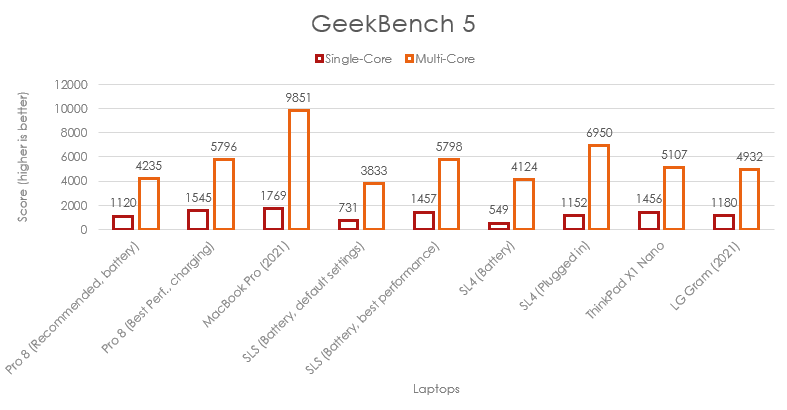 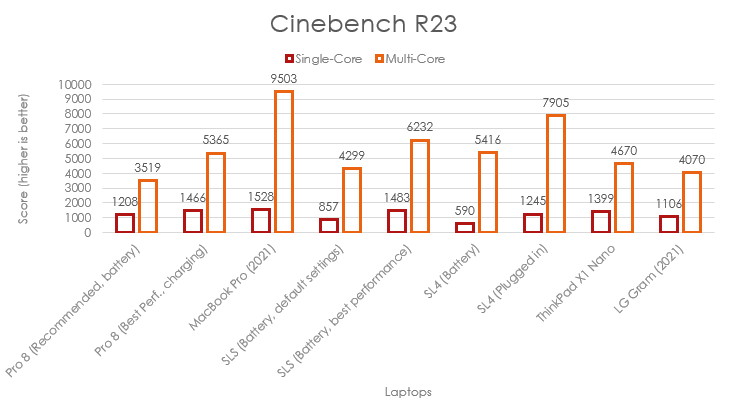 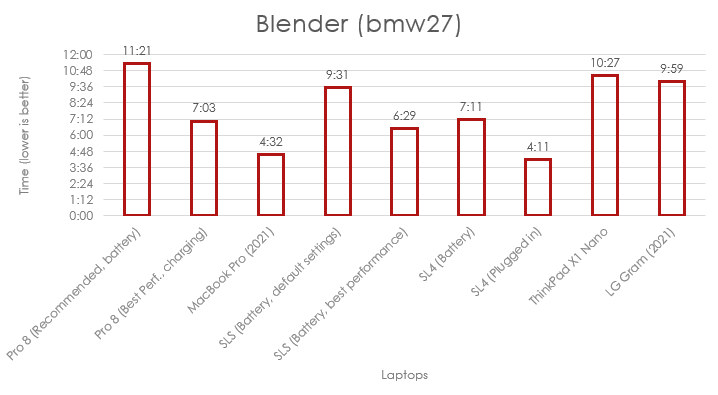 The benchmarks we ran make this pretty clear. I ran several tests across a suite of tools both with the Pro 8 plugged into the charger and unplugged, running on ‘Recommend’ and ‘Best Performance’ tuning and with the screen set to 60Hz or 120Hz. In the charts above, I included the Pro 8’s scores from the Recommended tuning on battery (the lowest) and the Best Performance tuning scores while plugged in (generally the highest scores).

Unsurprisingly, the i7-1185G7 performed much better when on Best Performance. There was minimal difference between the battery and charging benchmarks when using Best Performance, but it’s worth noting that the Recommended tuning consumes less power. 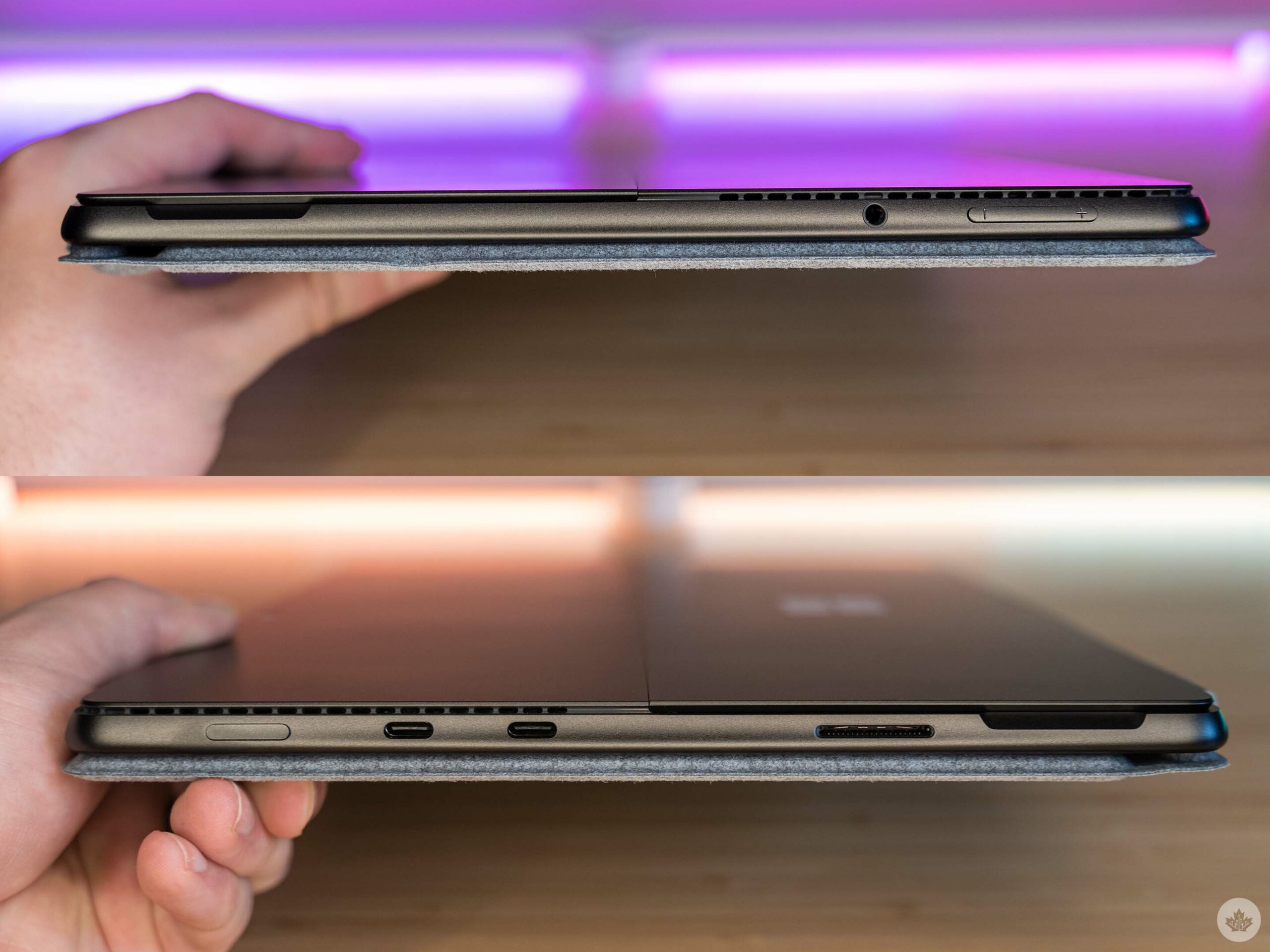 I mostly used the Pro 8 on the ‘Recommended’ setting and found it more than capable enough for my typical work usage, which consists mostly of opening way too many tabs in a web browser, listening to music, using Slack and editing the odd photo in Photoshop. While the latter did benefit from the ‘Best Performance’ setting, the rest was fine on Recommended, which gave me enough battery to make it through my workday.

Finally, I was surprised to see the Surface Pro 8 coming close to the Surface Laptop Studio (SLS) in several tests. The Pro 8 rarely beat the SLS, but it was close enough to make me question the extra cost of the SLS. Granted, the SLS does have a discrete GPU, which helped significantly in the GPU benchmarks. You can check out the reviews for all benchmarked devices below:

What else is there to say? 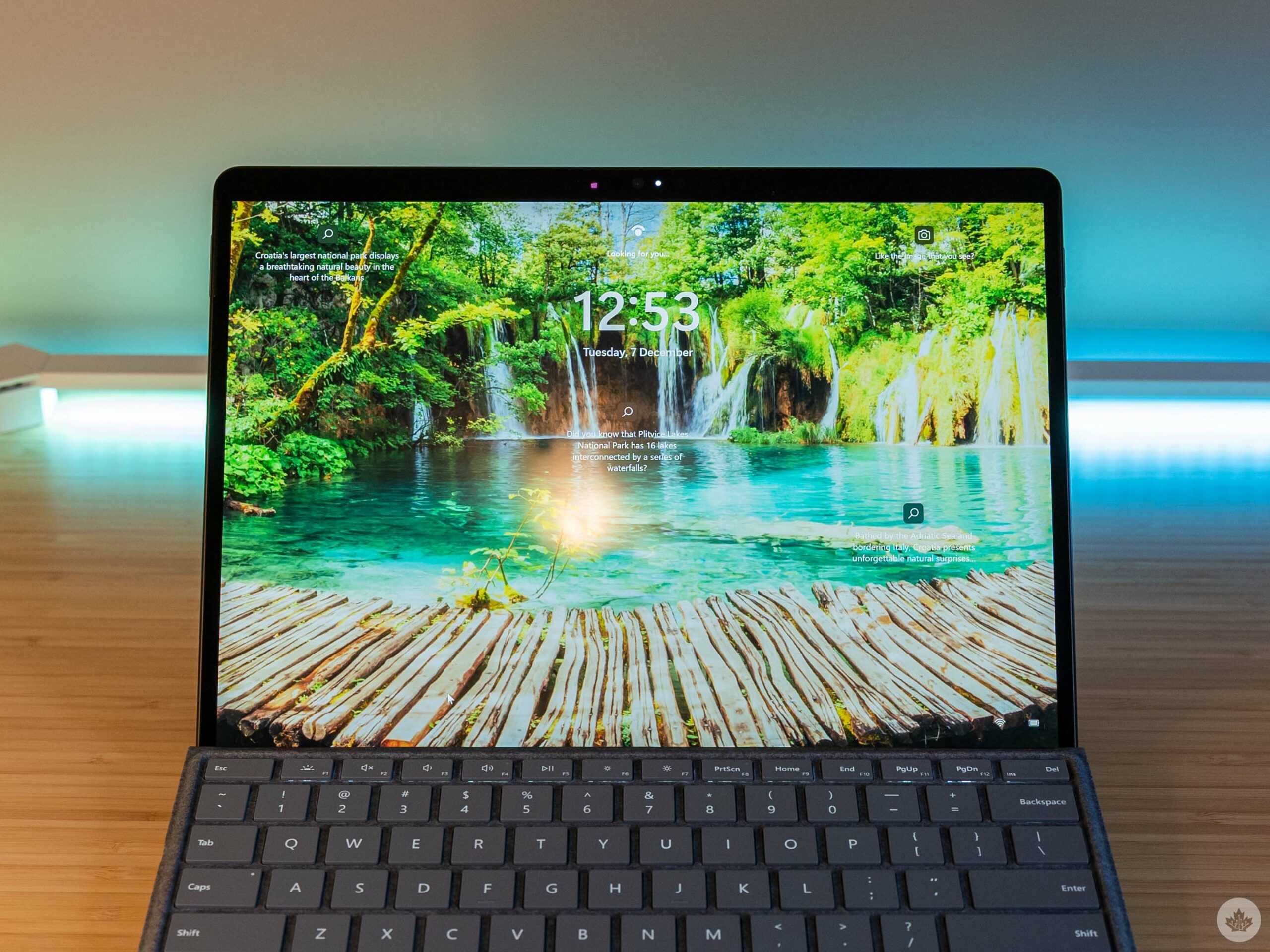 Beyond that, I feel there isn’t much else to say about the Surface Pro 8 I haven’t said about previous versions of Microsoft’s 2-in-1. The minor improvements are welcome, but other areas still need work.

The keyboard is still excellent, although the Type Cover / Surface Pro Signature Keyboard remains the worst of Microsoft’s Surface keyboards. I also can’t give the company a pass for charging so much for a practically mandatory accessory. This particular complaint is actually worse this year since the Pro 8 sports a higher base price of $1,399.99. 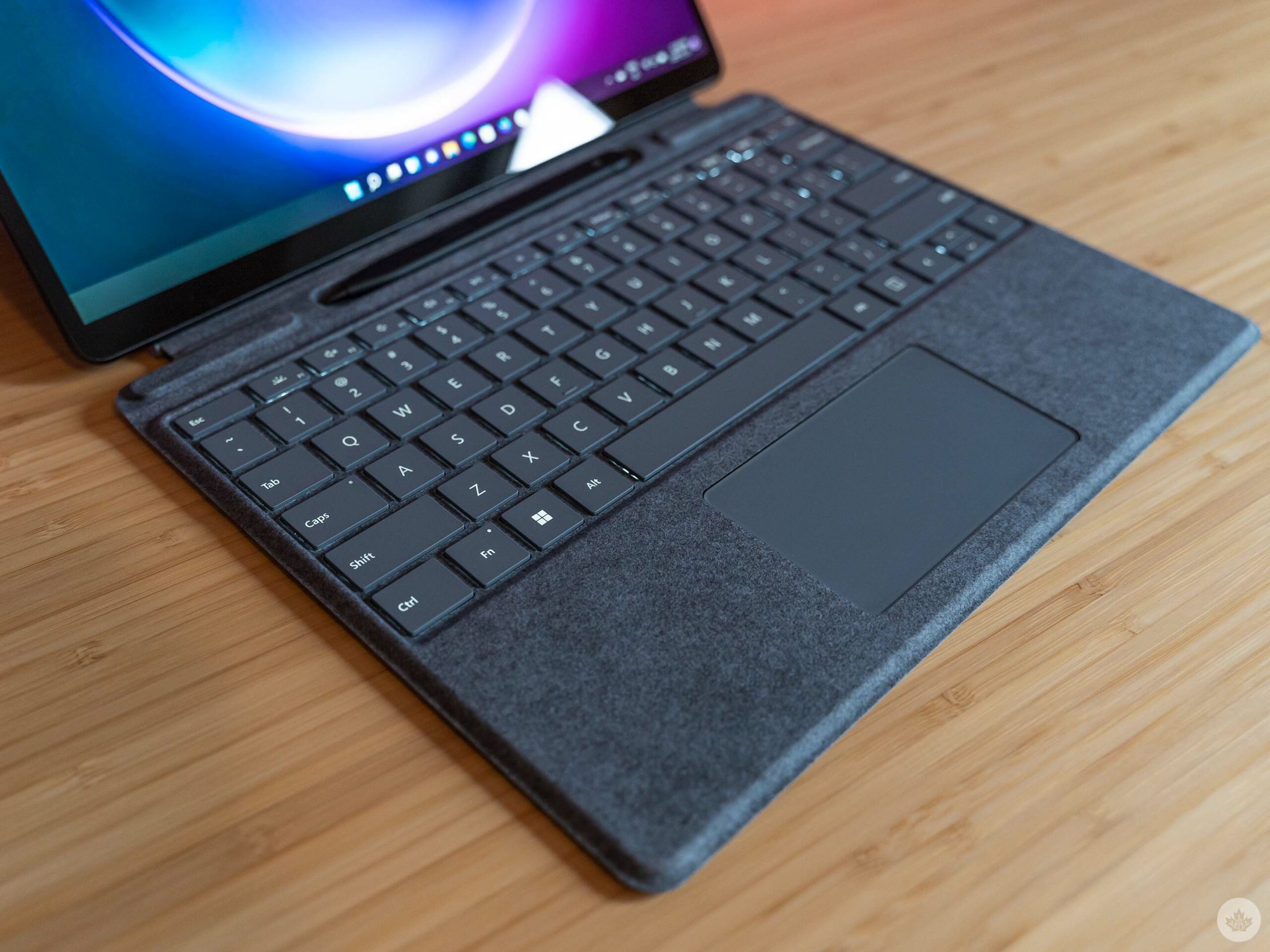 It’s also worth noting that I tested the i7 variant for this review, not the i5. In other words, you’re looking at a minimum of $2,039.99 to get an experience like I did, not counting the extra cost of accessories. That said, I think most people will get by just fine with the i5 given that the i7 Pro 8 doesn’t really offer enough performance to do anything beyond basic web browsing, word editing and similar arguably standard use cases — all things the i5 version should handle just fine.

Other long-standing complaints include a trackpad that’s too small and limited IO (two USB-C ports and a Surface Connect port isn’t enough). The Surface Pro 8 remains practically unusable on your lap unless you’re fine being uncomfortable — a fault of the form factor.

The Pro 8 is the best Surface Pro yet

Ultimately, the Surface Pro 8 is an excellent improvement on the Surface Pro formula. That’s great news if you like the 2-in-1 form factor with a kickstand and detachable keyboard. If you don’t like that, I don’t think the Pro 8 does anything that will win you over.

If you’ve got an older Surface Pro model and really like it, but are in the market for something newer and faster, the Pro 8 is a great choice. There are alternate 2-in-1s from other PC manufacturers that offer a similar form factor and experience, but I find they often don’t stack up to Microsoft’s Surface Pro line when it comes to features, build quality and other aspects.

Microsoft’s Surface Pro 8 starts at $1,399.99 in Canada. The version that I tested for this review clocks in at $2,039.99, not including the keyboard accessory. You can check out the Pro 8 on Microsoft’s website.