Halo Infinite is an excellent exploration-focused successor to Combat Evolved

The Chief is back 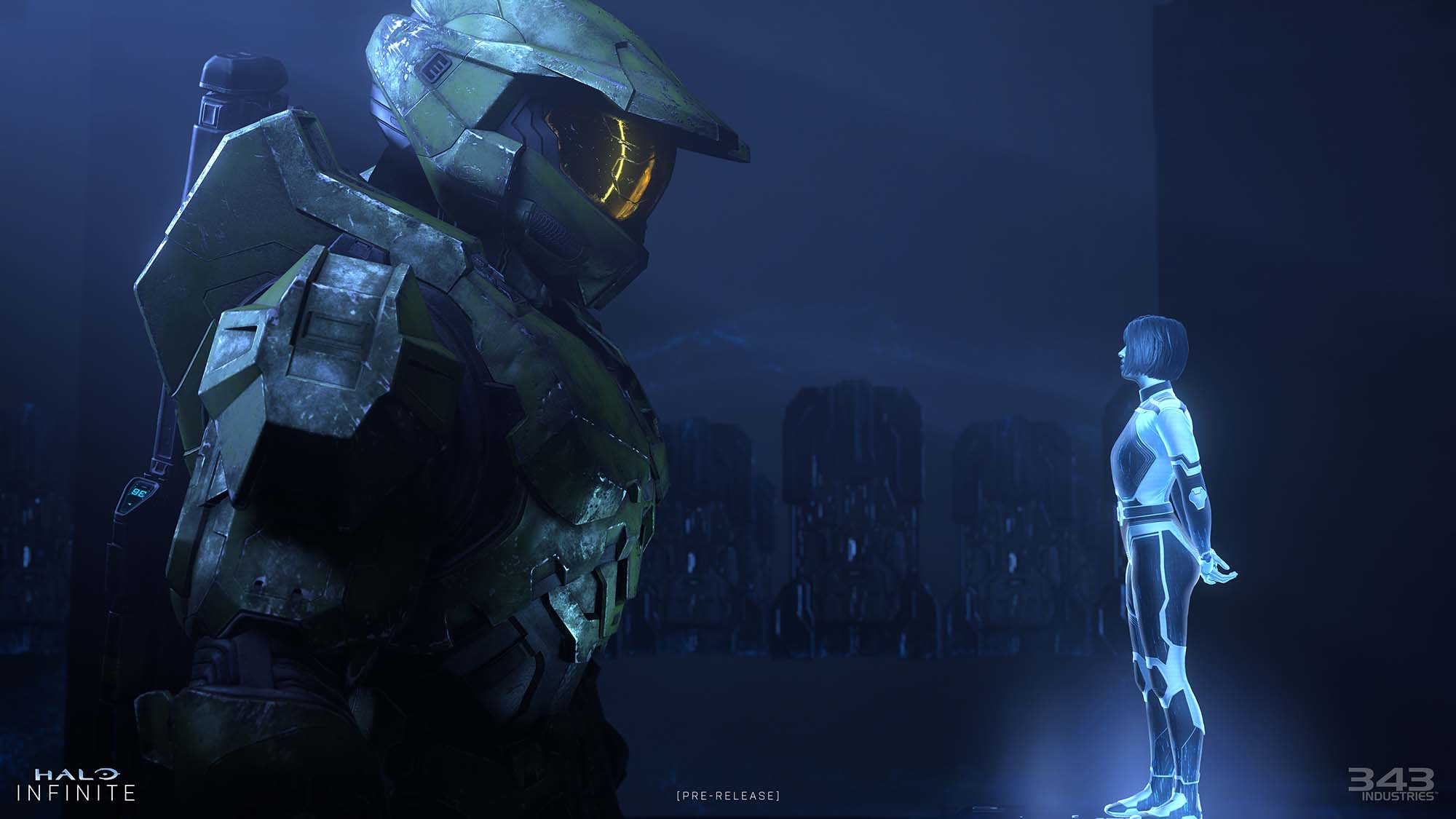 Following the game’s disastrous single-player reveal last year, I’d say my hesitation is more than understandable. Though, for the record, I was one of the few people that didn’t think “Craig” and friends looked that bad, especially considering the series has never been about flashy visuals — at least for me.

After spending roughly four hours with Halo Infinite‘s new pseudo-open world take on the series, I can confidently say that Infinite might offer the best campaign in a Halo title since Combat Evolved (CE).

First off, if graphics are your thing, you’ll be glad to know that the slice of the game I’ve played looks remarkably better than Halo Infinite’s first gameplay trailer. The flat textures and lack of detail are entirely gone and replaced with a far more rugged-looking, multi-layered environment, characters and most importantly, Master Chief.

Still, there’s a bit of a throwback look to Infinite‘s ‘Zeta Halo’ world that harkens back to fan-favourite CE levels like ‘Arriving on Halo’ that long-time fans of the series will appreciate. 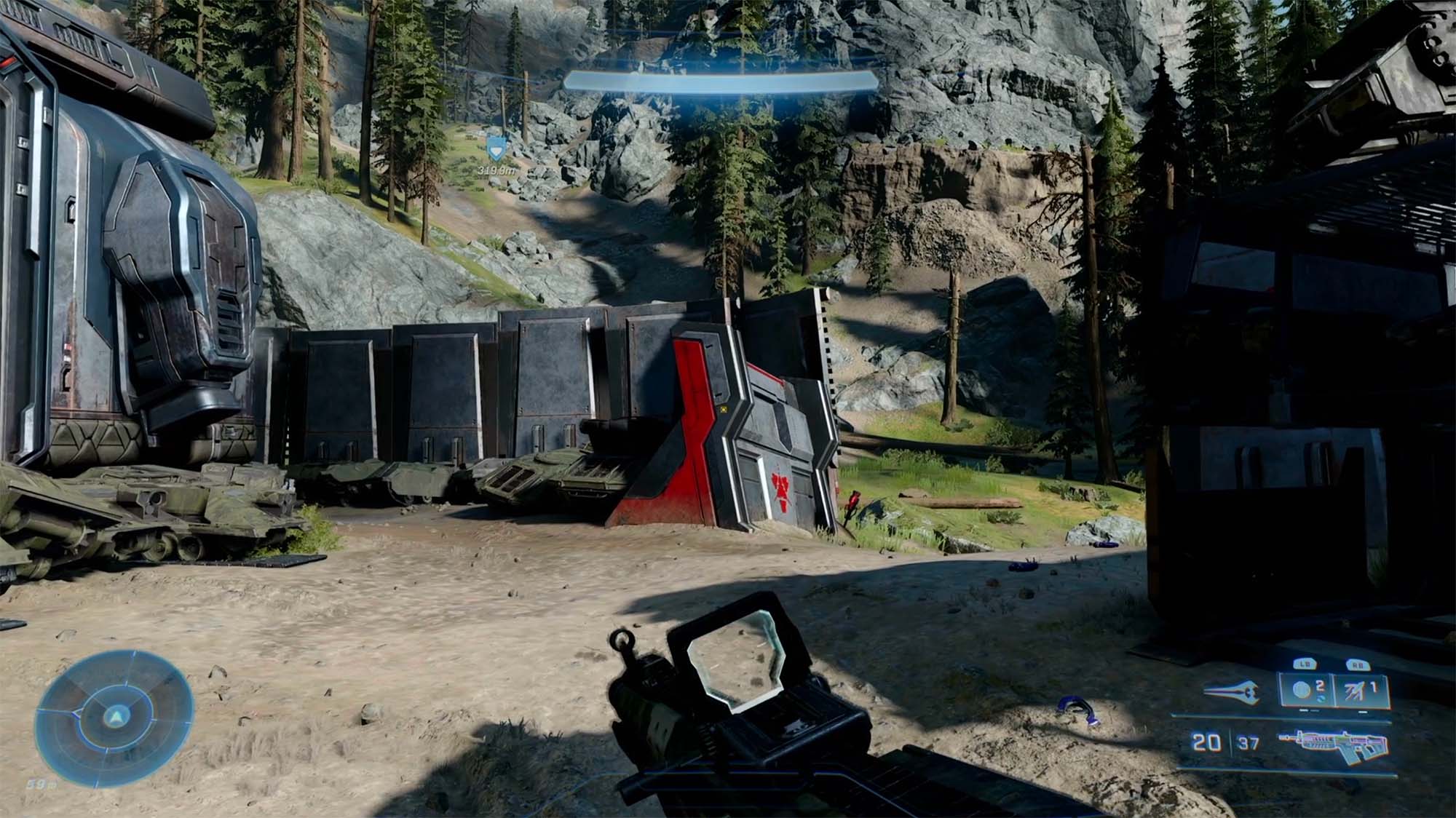 However, as far as I’m concerned, the Halo series has always been more about its gameplay and story than flashy visuals, and thankfully — at least so far — 343 Industries seems to have nailed it.

The best way to describe the overarching direction and pacing of Infinite’s campaign is to compare it directly to CE‘s ‘The Silent Cartographer’ level, which dropped players onto an open island and tasked them with specific goals, but Infinite, for the most part, lets you decide how to accomplish them. 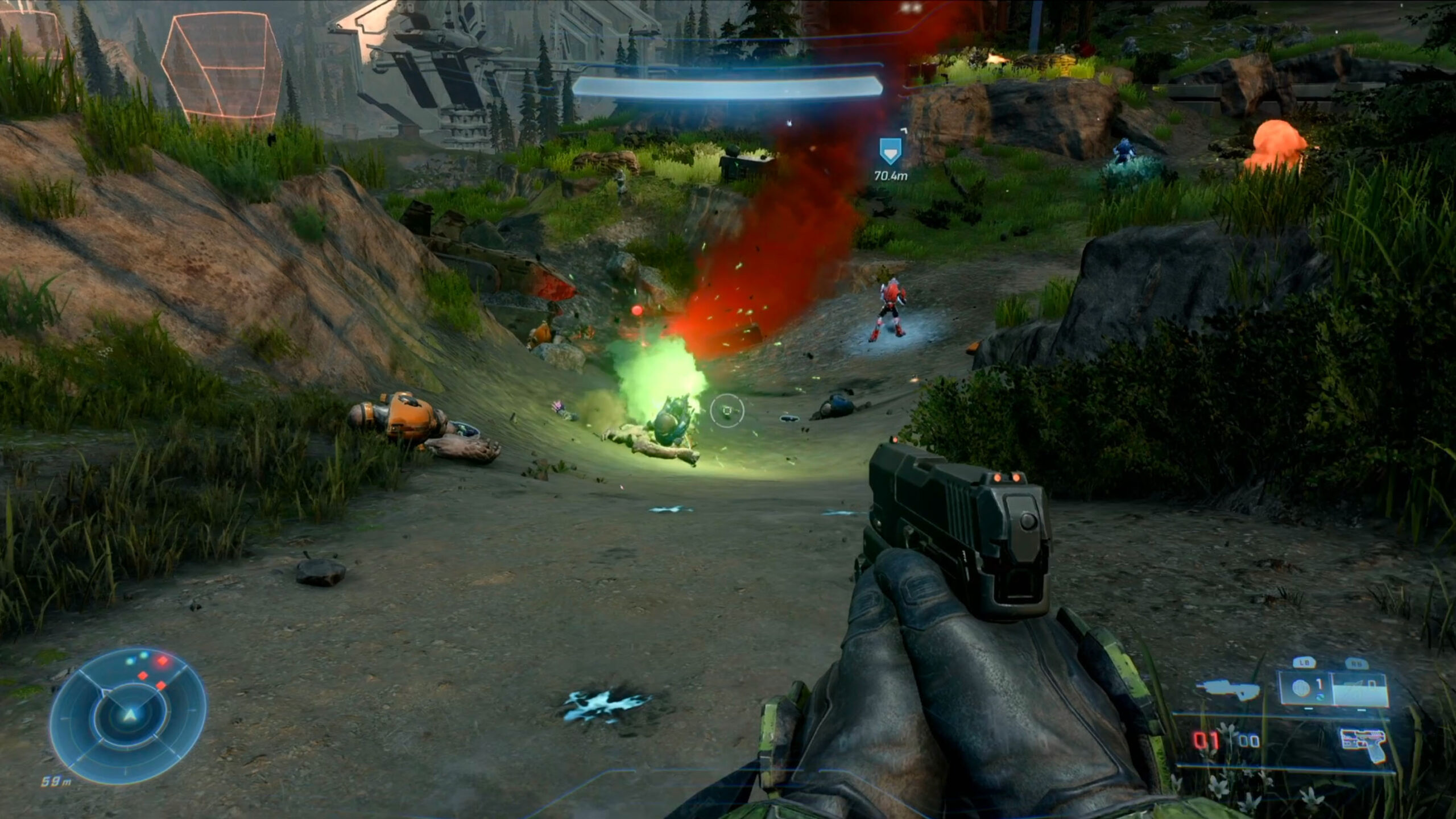 In fact, during a recent interview with MobileSyrup, Justin Dinges, Infinite‘s campaign art lead, explained that the game’s moment-to-moment gameplay across Zeta Halo is, in a sense, inspired by that specific level.

“Silent Cartographer is a great example [of how the game plays], even down to the kind of island nature of the space, but also the [Arriving on Halo] level in CE. When you first get dropped onto that ring, there’s this introduction of where am I? What is going on?” said Dinges.

Whether it’s taking down Banish-occupied ‘Forward Operating Bases’ (FOBs) that give you access to helpful Marines and new weapons/vehicles, scoring valor by helping Marines in firefights or taking out elaborate enemy bases, Infinite offers an unprecedented level of freedom for a Halo title. More importantly, you’re able to decide precisely how you want to accomplish these open-ended tasks. 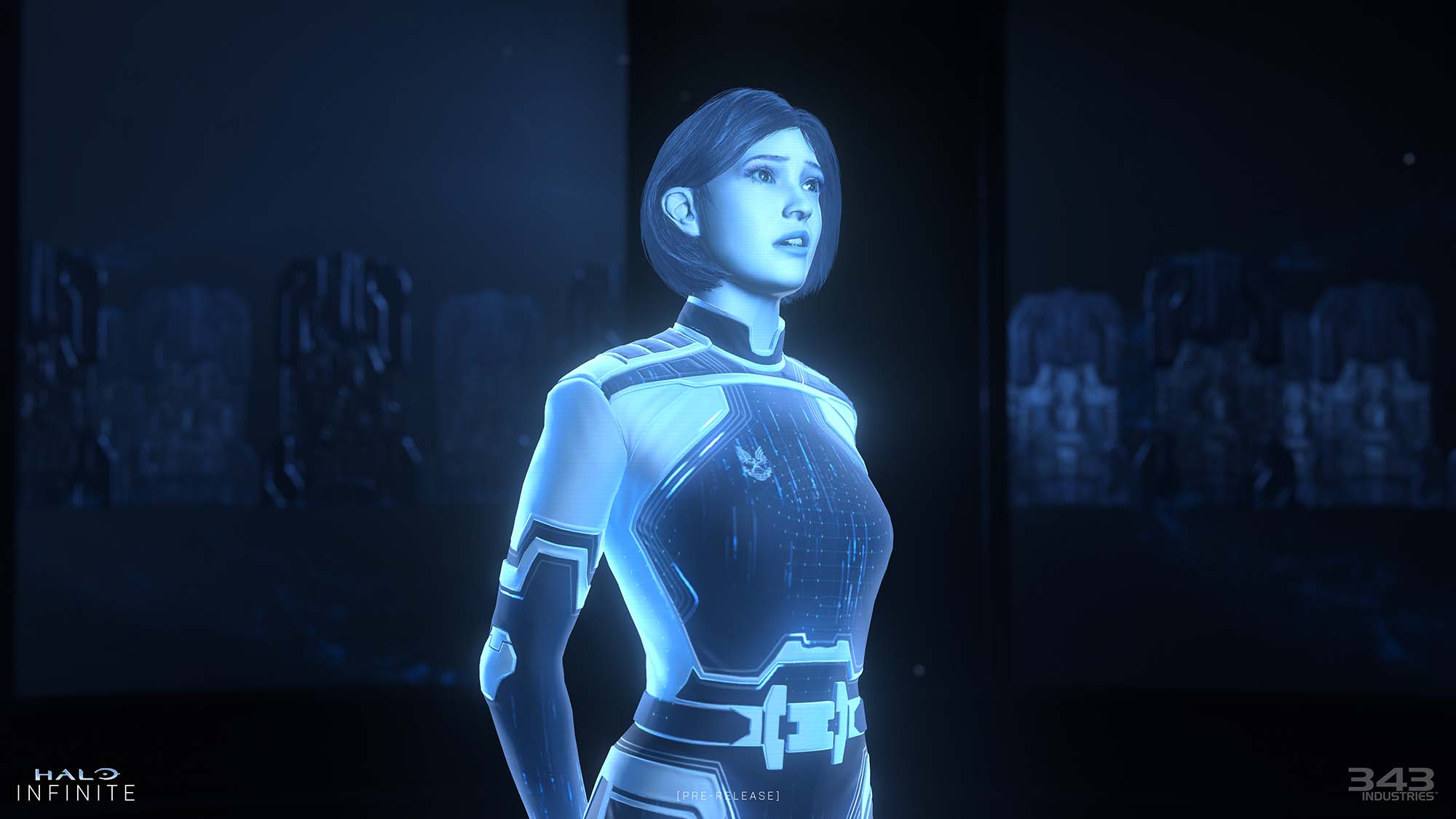 Are you more inclined to sit back and use the Sniper Rifle? You can do that. Maybe you picked up a Rocket Launcher from a hidden weapon cash and want to put it to good use. This is also a very viable route. This new level of freedom is very reminiscent of Halo: Combat Evolved and helps make the game feel far less linear than later entries in the series.

“For the player, the characters around them might know what’s going on with the Covenant vs. UNSC, but the player is trying to figure out everybody’s motivations; where am I? Where do I go next? For me, the gameplay in Infinite feels like it harkens back to the level that shared the game’s name [Arriving on Halo]. It’s open, it’s mysterious, it’s inviting, it’s dangerous, and there’s an immediate opportunity and choice presented to the player,” said Dinges.

But don’t worry, Halo Infinite isn’t turning into a fetch quest-filled open-world Ubisoft title in the vein of Assassin’s Creed Valhalla. During my time with the game’s preview and its first sandbox area, each mission felt well thought out, unique and, most importantly, fun. Though early portions of the preview that take place on a Banished ship feel more linear and similar to past Halo titles, the various landmasses of Zeta Halo — which are connected by bridges you unlock — are entirely open. 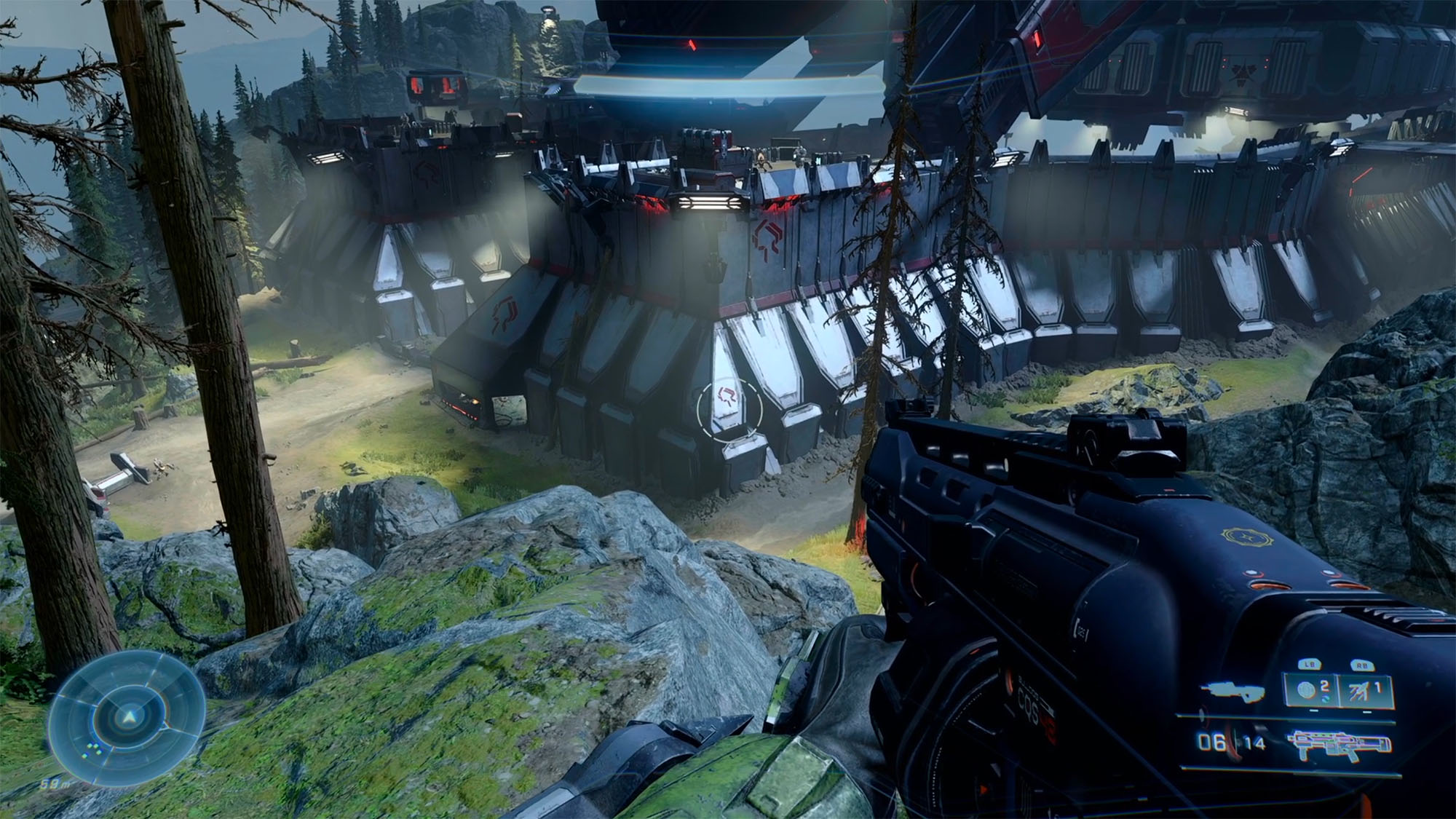 It’s also important to mention that the ‘Grappleshot’ plays a significant role in Halo Infinite’s gameplay. Whether it’s scaling a mountain range to help out a team of marines under fire or hunting down a ‘Spartan Core’ that allows you to upgrade the Chief’s various abilities, it’s difficult to imagine Infinite without the mobility the Grappleshot offers.

Speaking of Spartan Cores, all of the Master Chief’s abilities, including ‘Threat Sensor,’ ‘Thruster,’ ‘Drop Wall’ and ‘Shield Core,’ can be upgraded to be slightly more powerful. For example, during my brief time with the game, I upgraded the Grappleshot to stun enemies. That said, improving equipment doesn’t seem to open up Zeta Halo more and instead, progression through the open-world is pushed forward by completing main missions. 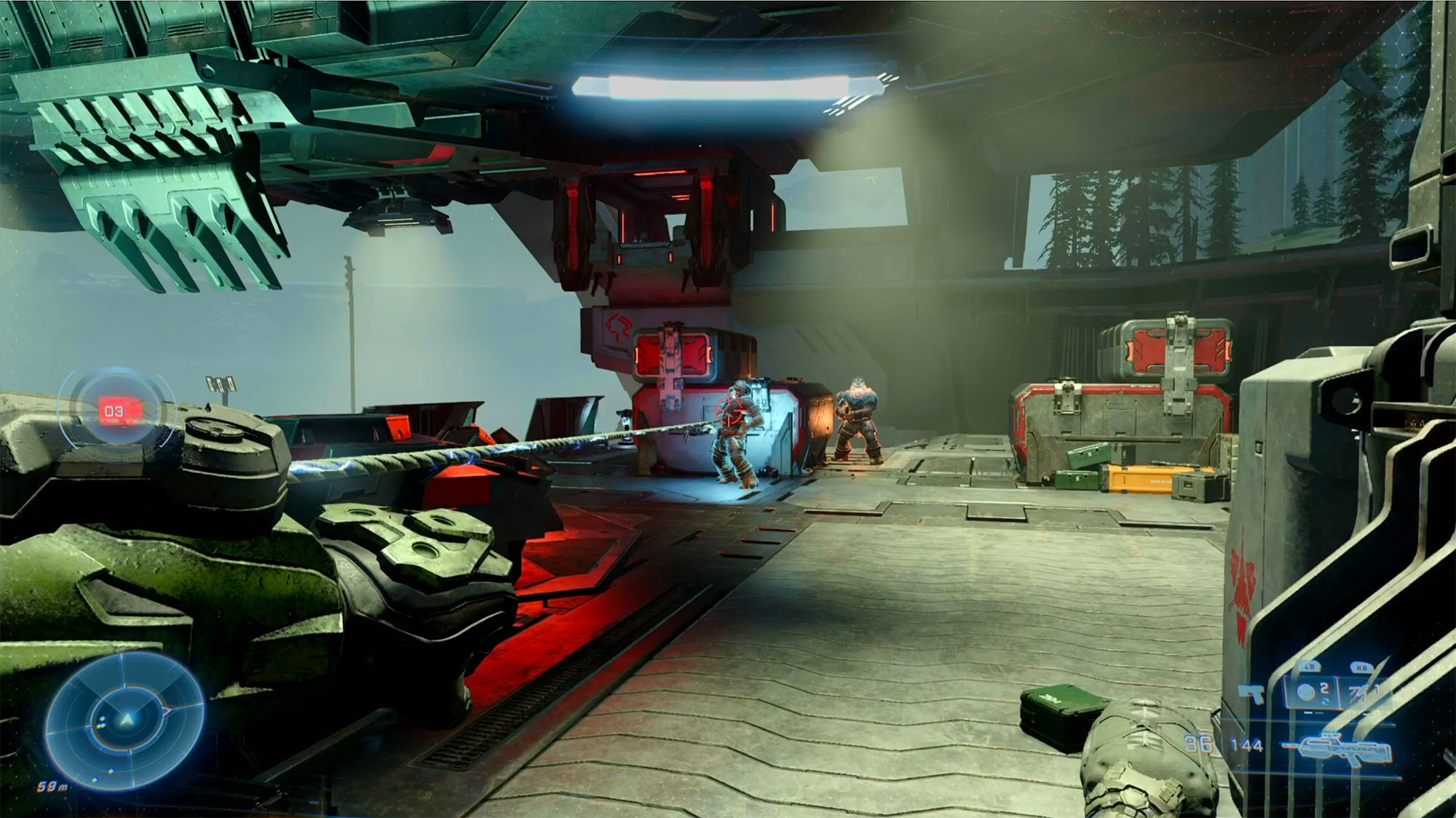 In Infinite, you’ll encounter familiar franchise mainstays like the Pistol and Assault Rifle, but also new weapons like the Disrupter Shock Pistol and VK78. More so than other Halo titles, all of the new weapons I’ve encountered so far — with the Shock Pistol that briefly electrifies enemies being the best example — feel like they make sense in the context of the series.

On Zeta Halo, players will encounter familiar enemies, including Brutes, Jackals, Elites and, of course, Grunts. The game’s enemies respond to your every move and seem to even work together to flank you at times. There are also boss fights in Infinite that are a throwback to the first time you encounter a Hunter in Combat Evolved. These battles are both refreshing and a welcome change of pace from Infinite‘s standard gameplay. 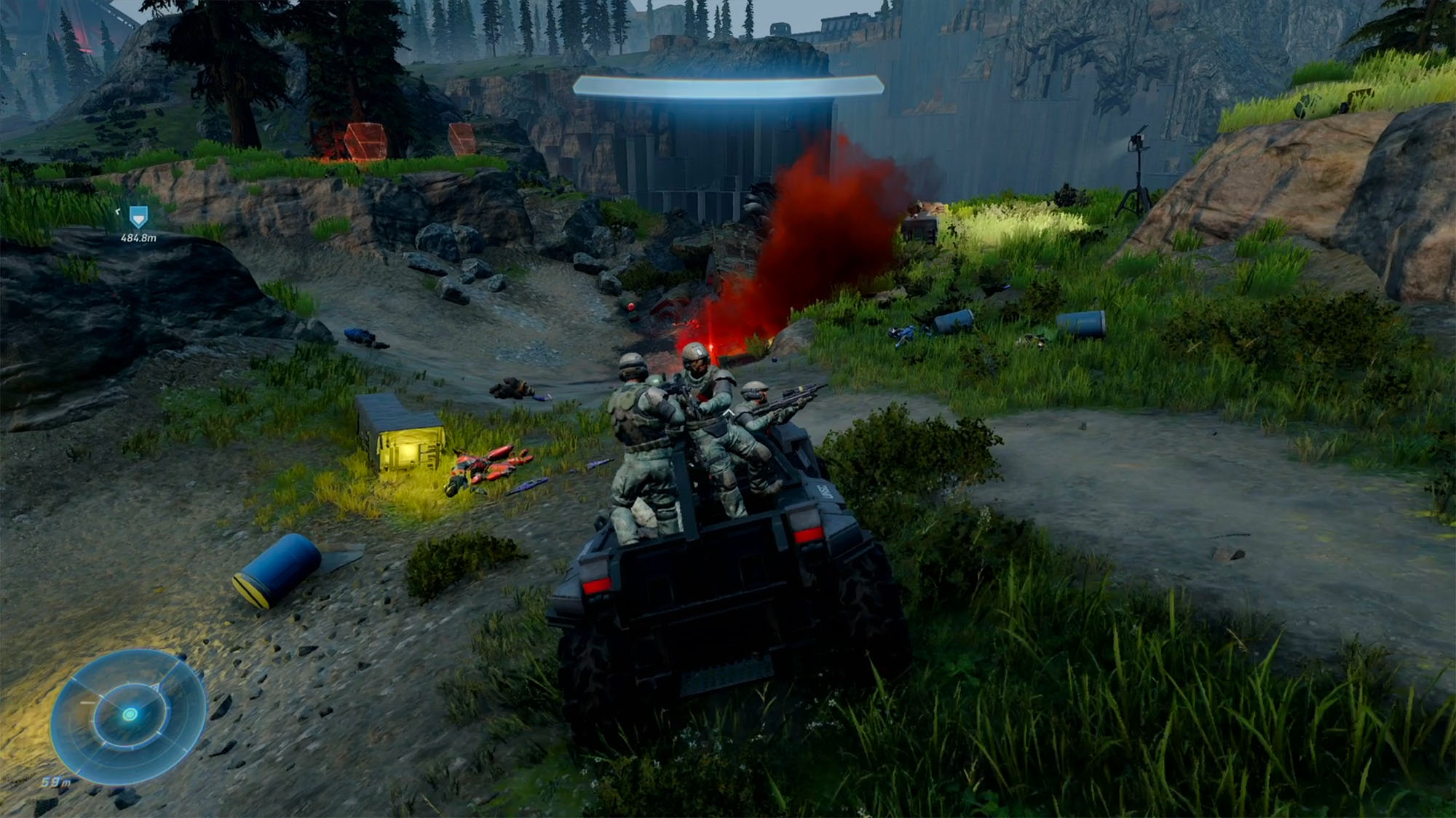 If you’re wondering why I haven’t mentioned Halo Infinite’s story yet, it’s because I don’t want to give too much away and the restrictions surrounding what I’m actually able to talk about are pretty stringent. I was introduced to the Banished, a group of former Covenant from Halo Wars 2, and its leaders. The Banished are on Zeta Halo for some sort of purpose, and it appears it’s the Master Chief’s mission to figure out why.

I also met the unnamed Pilot from previous trailers, who seems like he could be an interesting character later in the game, but that hasn’t played much of a role yet. Meanwhile, Infinite‘s AI, named ‘The Weapon,’ fascinates me. The Cortana-like character — which amusingly even looks like the blue AI — was designed to destroy the Master Chief’s former partner in crime turned rogue AI and then ordered to obliterate herself.

For unclear reasons, that didn’t happen, and the naive AI jacks into the back of the Master Chief’s iconic suit to help save humanity. So far, at least, The Weapon is by far Infinite‘s most interesting character because her motivations are unclear. It’s also worth noting that Jen Taylor, the actor behind Cortana and Dr. Halsey, also offers a charming performance as The Weapon. 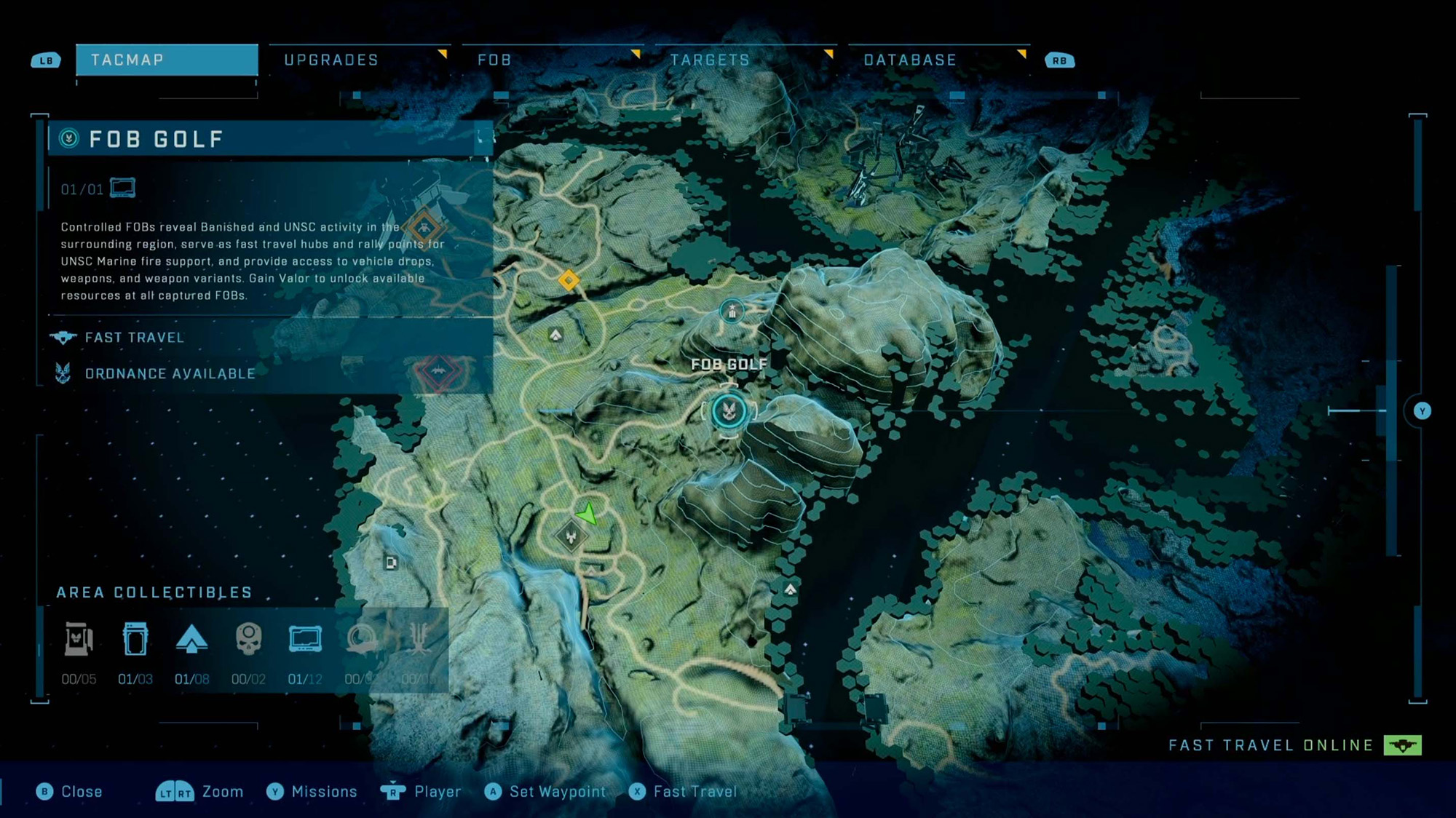 The Master Chief himself also seems to be a throwback to the more stoic take on the character from earlier Halo titles. He’s once again a blank slate and a man who just doesn’t say very much, which is entirely intentional, according to Steve Dyck, Infinite‘s character director.

“The Chief is this gruff individual, but he’s always surrounded by a bit of levity, whether it’s Grunts or Marines. Marines are reacting to the Chief and saying ‘oh man, it’s Chief,’ and they get excited because he’s around. It makes it so the Chief doesn’t have to say much because the world is saying everything for him,” said Dyck.

Regarding both its gameplay and story, Halo Infinite is poised to be a throwback to the franchise’s early days, which is what I want from a Halo title in 2021. What’s still unclear is if Infinite‘s open-world gameplay will remain entertaining throughout the entire experience. For example, Zeta Halo seems somewhat small and, in terms of missions, a little sparse. Hopefully, 343 Industries has found a way to pack enough things to do into the mysterious ring world despite its size.