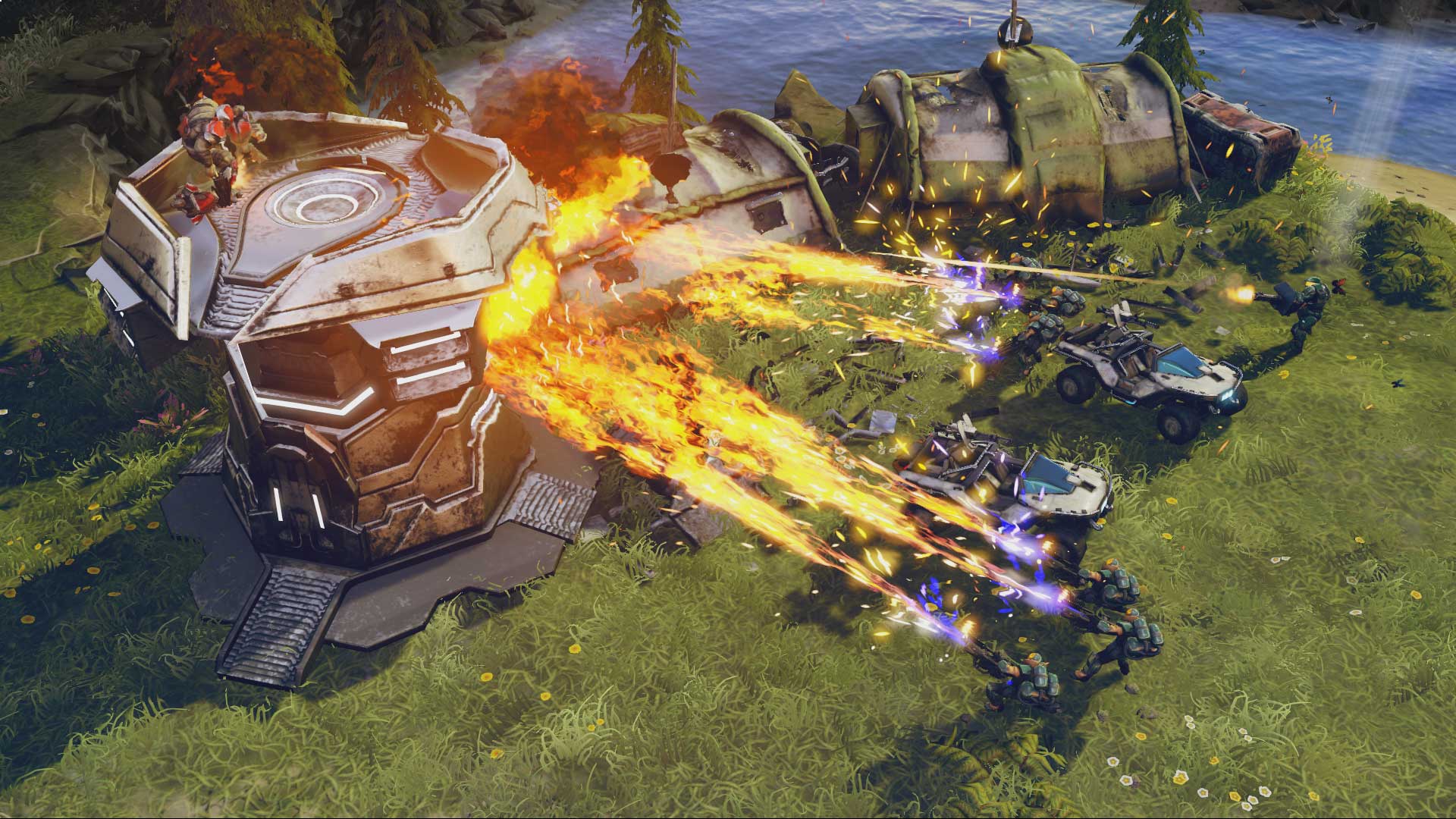 While some would argue the real-time strategy (RTS) genre is dead, that statement isn’t entirely accurate.

Traditional RTS games may now be niche, but the once dominant genre of the mid 90s has morphed into something else, the MOBA (Multiplayer Online Battle Arena).

Looking past the silly name and acronym, MOBAs have arguably become the video game industry’s dominant game type, with titles like League of Legends, Heroes of the Storm and DoTA 2 leading the way. These games feature elements of the traditional RTS, but kicked into high gear, with rapid unit creation, often mixed with RPG character development elements, and self-contained matches that can be played in a relatively short period of time.

Placed in a broader industry context, this is exactly what Creative Assembly‘s (the team behind the Total War franchise) and 343 Industries’ Halo Wars 2 is — a reimagining of the traditional RTS genre for a generation of League of Legends fans that don’t like waiting for units to be created.

Long-time fans of strategy titles will dislike how Halo Wars 2 speeds up building and character creation, as well as its sometimes blisteringly fast pace, but during the dozen or so hours I’ve spent with the game, I’ve concluded this shift gives RTS titles a much-needed dose of speed and fluidity, resulting in an experience that feels better suited to modern gaming.

It’s also interesting that Halo Wars 2 exists in the first place given the recent wane in popularity of real-time strategy titles. Halo fans weren’t clamouring for a sequel, despite the fact that 2009’s Halo Wars was well-received and sold reasonably well (for anyone counting, Halo Wars was released eight years ago). In what was probably an effort to fill the absence of a core entry in the series, fans of Halo and the RTS genre have been graced with what I think will go down as one of 2017’s most underrated titles. 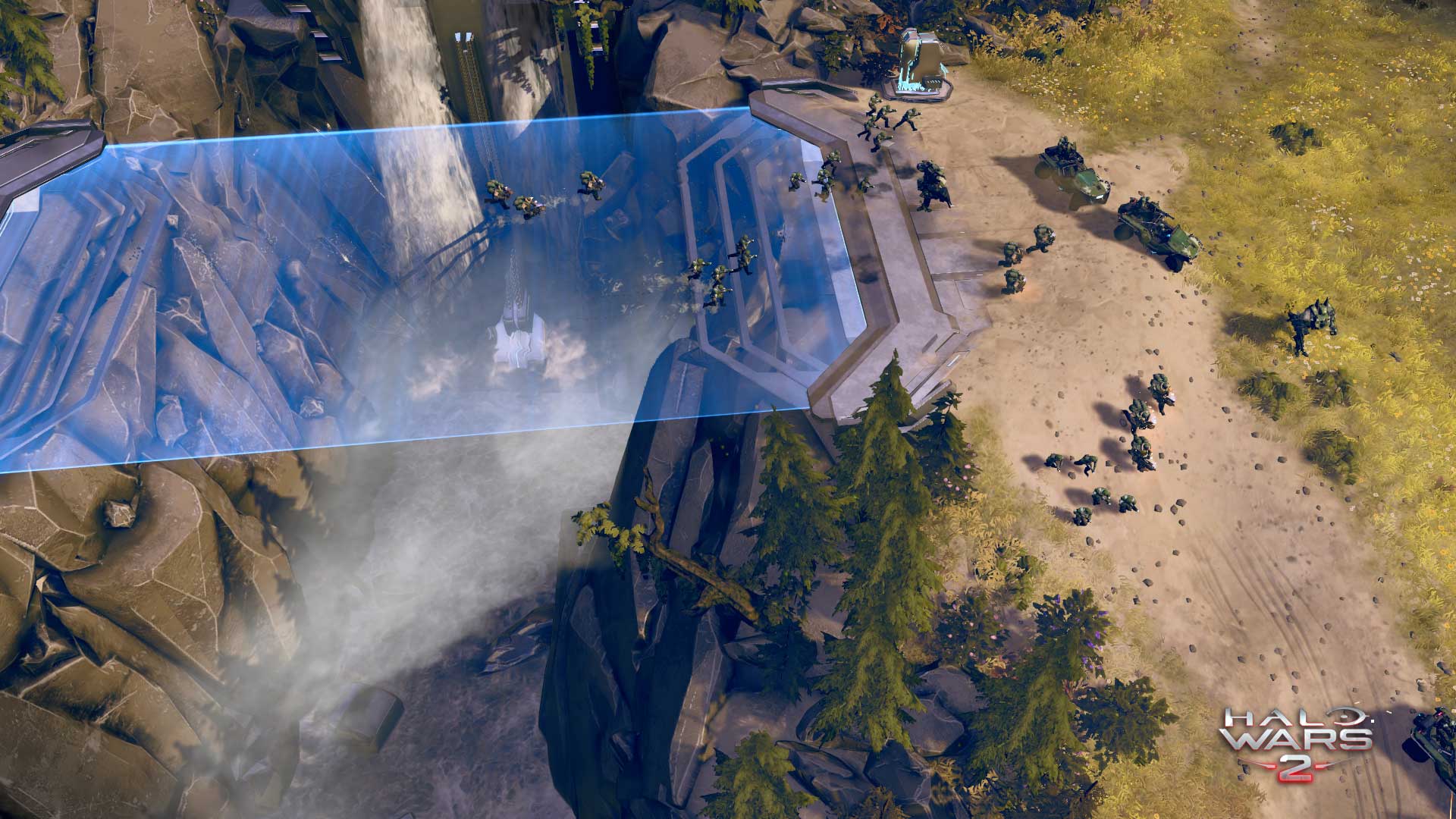 At the outset, the first thing I noticed about Halo Wars 2 is that it feels more like a Halo game than its predecessor. The camera is more zoomed in, revealing additional unit detail. Small touches like the instantly recognizable gurgle of a grunt dying in a hail of gunfire, or the war cry of a green marine clad in armour, play a significant part in making Halo Wars 2 feel like it fits better in the Halo universe than its predecessor.

While Halo Wars was generally a surprisingly solid game, it also felt like a Star Craft-Halo mod. While this is still true of Halo Wars 2 to some extent — fire wielding Hellbringers are almost comically reminiscent of of Star Craft’s Firebats, right down to their gruff, nihilistic tone — the overall experience feels like it’s inspired by Blizzard’s RTS series, rather than an outright rip-off.

Given that Halo Wars is available on Xbox One and PC, I assumed that after spending an extensive amount of time with both iterations of the title, I would prefer the mouse and keyboard version of the game. To my surprise, however, Halo Wars 2’s console controls are one of the most impressive things about the game and its best feature. 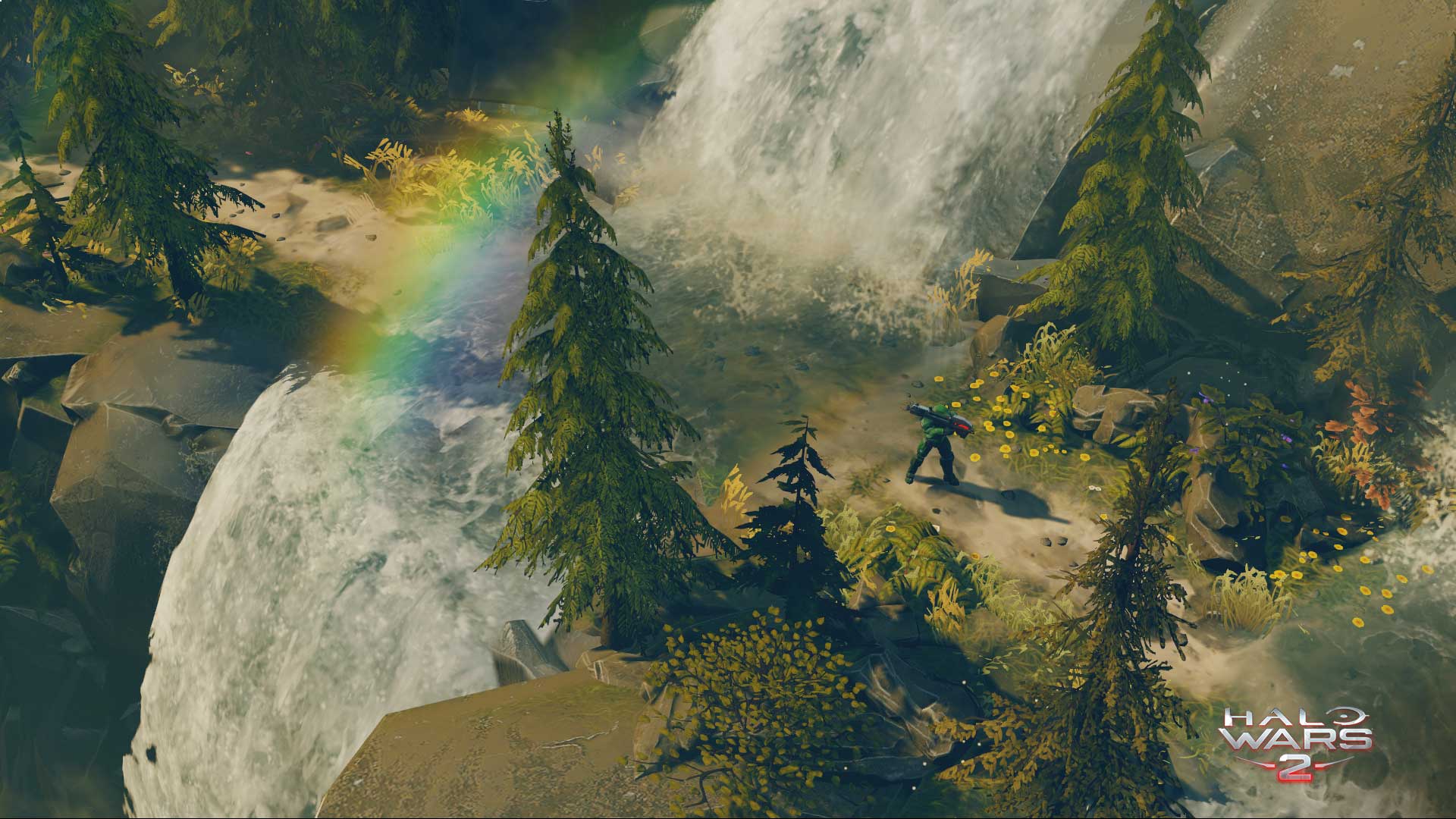 Creative Assembly has built upon the control scheme Ensemble Studios established with Halo Wars 2, dialing up its accuracy and making minor tweaks that manage to make the real-time strategy genre feel even more at home on consoles. Mission objectives also feel more varied than they were in the first game and even RTS titles in general, ranging from controlling specific points on a map, to moving between points and sometimes protecting specific units, adding a much-needed dose of variety to Halo Wars 2.

I talk about this extensively in my Halo Wars preview from a few months ago, but basic RTS mechanics such as selecting specific units, managing multiple bases and even just moving around the map feel as accurate as they do in the PC version of the game. Going into Halo Wars 2, this isn’t something I expected from the game. Of course the PC version is slightly better looking than its Xbox counterpart, all depending on your computer’s power of course, allowing for resolutions up to 4K if your rig can handle it.

Story-wise, Halo Wars 2’s tale fits within the Halo universe in a unique way, throwing back to past entries in the series, but also pushing forward with unique characters. Without giving too much away, the game picks up where the first Halo Wars left off, with Captain James Cutter and Professor Anders, as well as the crew of the Spirit of Fire, waking up from cryosleep at the Ark, a Forerunner installation those familiar with Halo Lore will remember. 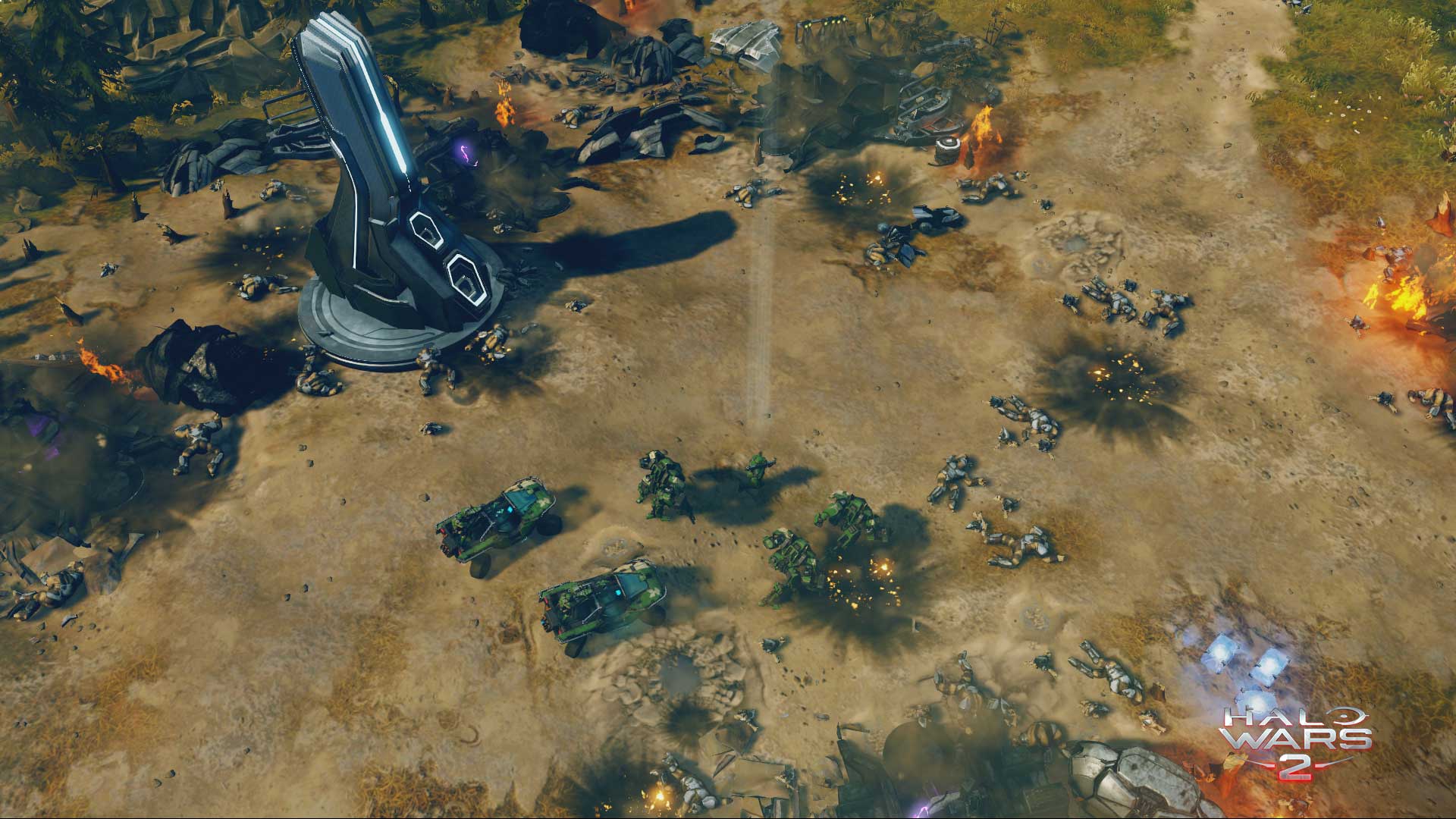 The most compelling character in the game is Isabel, an AI recovered from the rubble of a UNSC base destroyed by the Banished — a group that’s defected from the Covenant and is currently battling the alien conglomerate — and her overall motivation in the story. Isabel is very similar to another prominent AI from the Halo series, Cortana, though she also has her own unique look and personality.

Unfortunately, apart from playing matches against the computer, I wasn’t able to test Halo Wars 2’s various multiplayer modes because so few players were online pre-review embargo. I have, however, played the game’s League of Legends inspired point-control Blitz mode extensively at 343 Industries’ office in Seattle. In Blitz, units are created by drawing cards, with players creating pre-determined decks before the game (depending on the game type), turning up the speed of the game considerably.

While Blitz held up well at the time, it will be interesting to see if a community forms around Halo Wars 2’s multiplayer mode once the game is out in the wild, especially given the minimal buzz surrounding the title’s release. 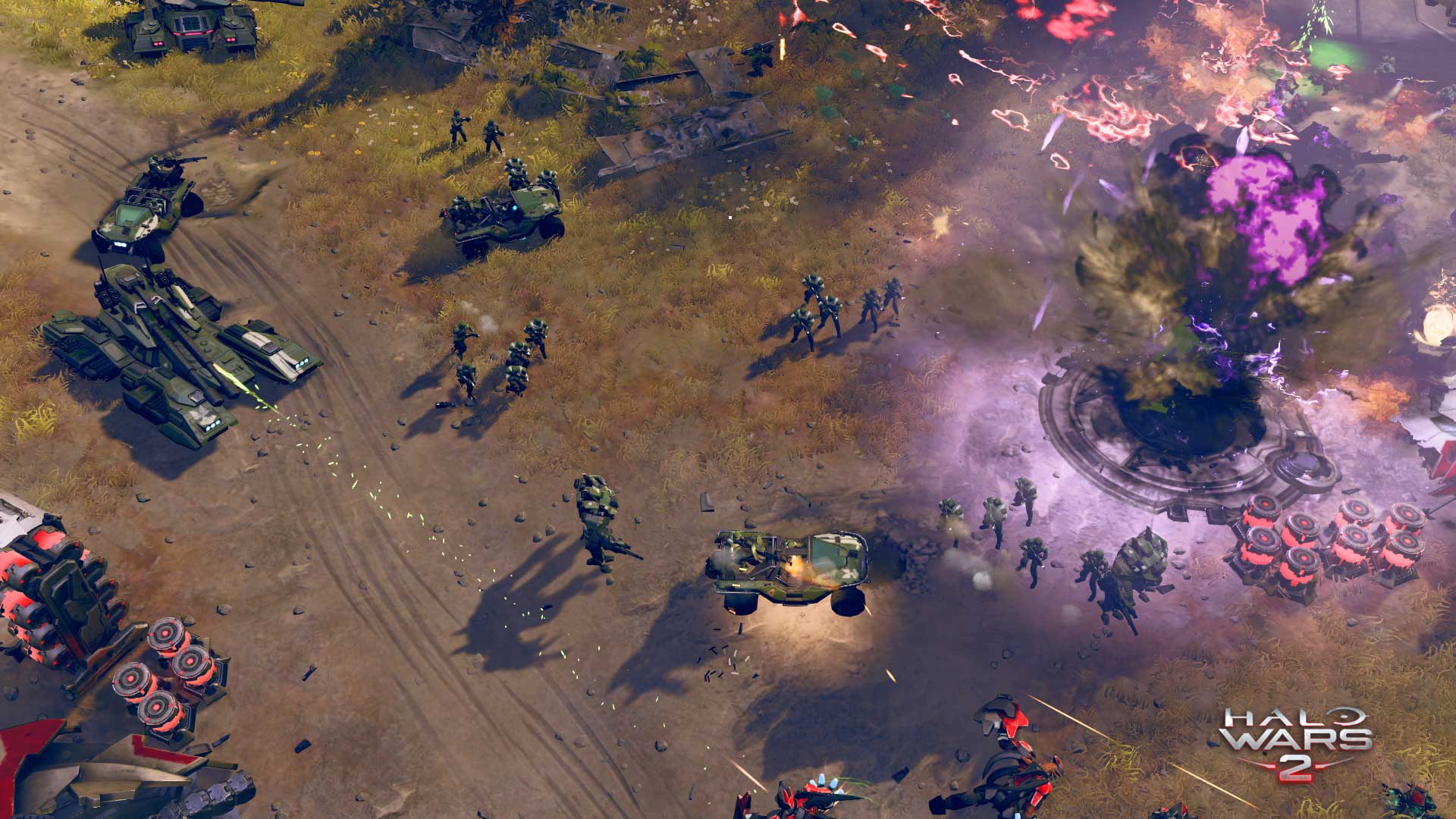 Sticking with my earlier thoughts on the game, with Halo Wars 2, Creative Assembly has accomplished the impossible, creating a game that feels like it belongs in the Halo universe, as well as modernizing and simplifying the RTS genre in the process, admittedly a move that could frustrate long-time fans of the historic genre.

As someone who has followed the Halo series for years and considers themselves a reasonably big fan of the franchise, Halo Wars 2 amounts to a pleasant surprise. Now excuse me while I go play another game of Blitz.

Halo Wars 2 is set to release on February 21st and is available on Xbox One and PC. The game is also part of Microsoft’s cross-play program, which means if you purchase the Xbox One version of the game, you also get access to Halo Wars 2 for PC, and vice versa.