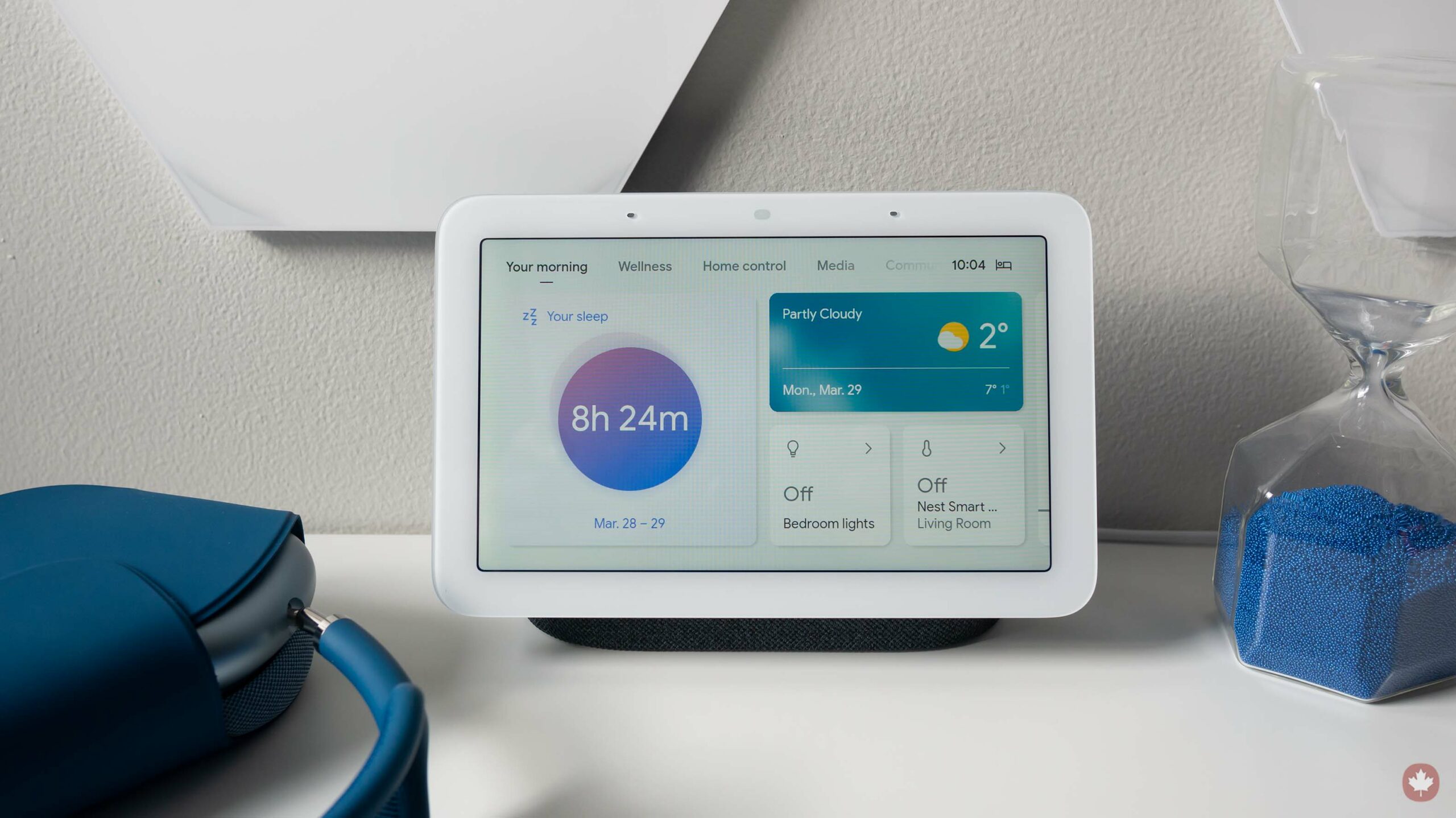 Now that smart speakers from both Google and Amazon are releasing at what feels like an almost yearly cadence, the main question surrounding every new iteration is if it offers enough improvement over its predecessor to be a worthwhile update and attract new users.

First off, the new Nest Hub looks identical to its predecessor in every way, and it’s really only the smart display’s internals that have changed. 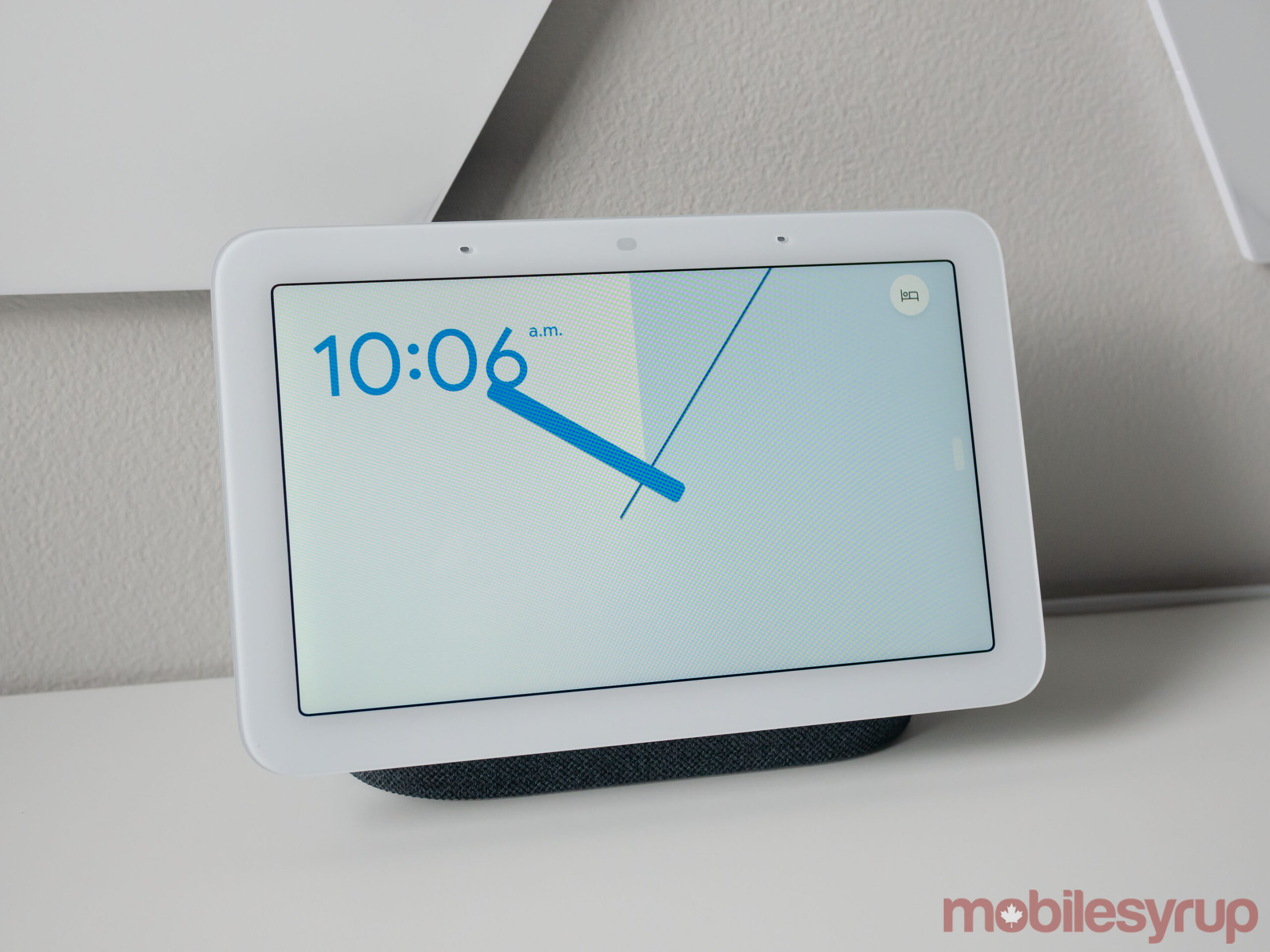 The Nest Hub (2021) features marginally improved audio quality that offers fuller sound, a better processor and still doesn’t include a camera, thankfully (I’d likely never put it in my bedroom if it did). With that in mind, the main draw with the 2nd-gen Nest Hub, is its surprisingly capable automatic sleep tracking powered by Google’s Soli sensor.

This means if you already own an original Nest Hub and have no interest in sleep tracking, you likely won’t have much of a reason to upgrade. On the other hand, if you’ve been waiting to pick up Google’s Smart Display, the Nest Hub (2021) is an undeniably better device that offers innovative sleep tracking features and an overall more responsive operating system. 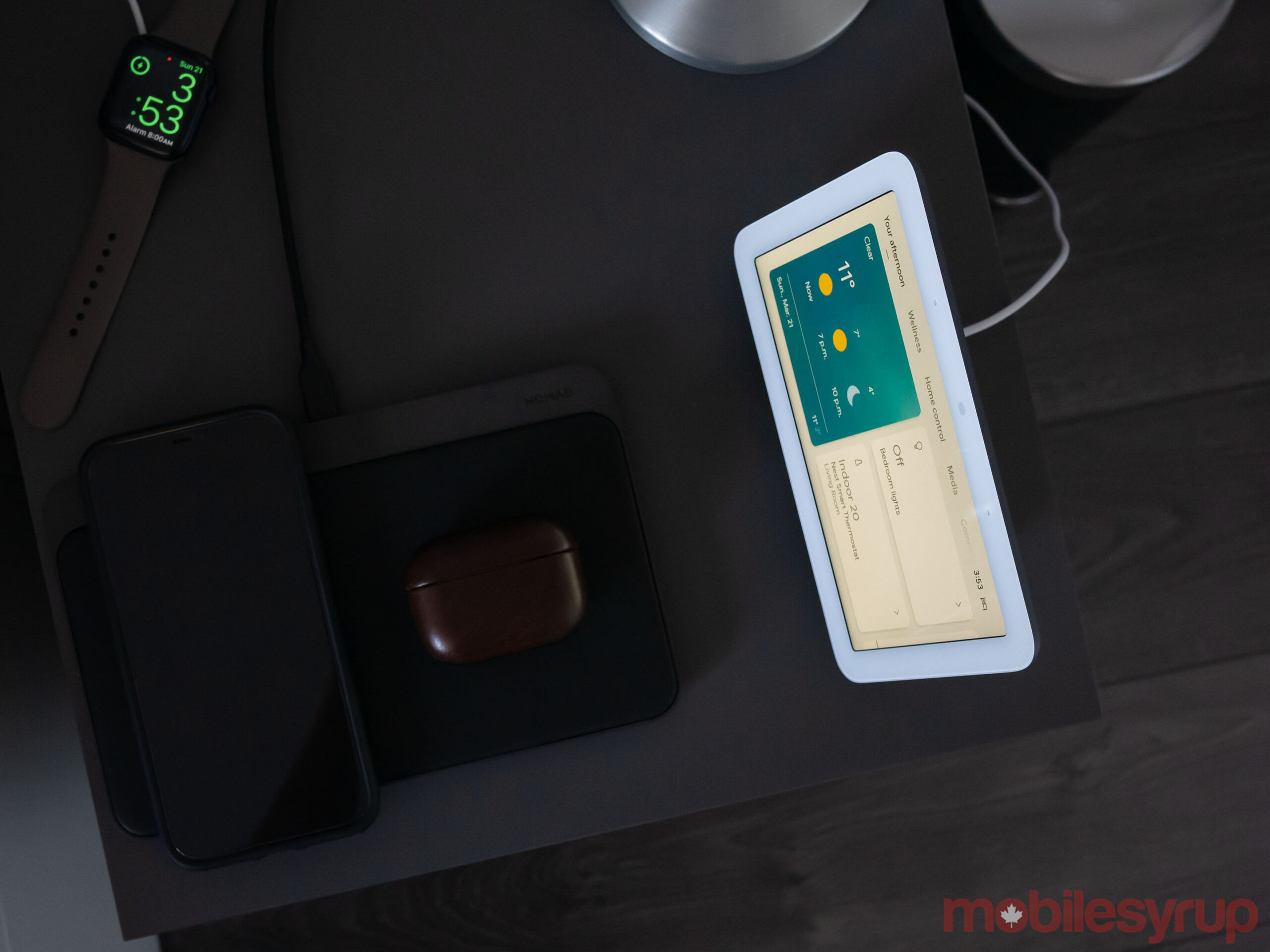 If you placed the first- and second-gen Nest Hub side-by-side, most people wouldn’t be able to tell the difference. That said, there are a few subtle changes with the Nest Hub (2021).

First off, there’s a new blue colour that Google calls ‘Mist.’ However, the version sent to me that’s featured in these pictures is the more subdued ‘Charcoal.’ The full lineup of colours includes ‘Chalk,’ ‘Charcoal,’ ‘Sand,’ and, of course, ‘Mist.’ The device’s display bezel is also flush with the rest of the Nest Hub’s frame, making the screen far easier to clean when compared to the first Nest Hub.

The Nest Hub (2021) also features slightly larger dimensions and weighs a little more, coming in at 178.5mm x 118mm x 67.3mm and 480g. There’s still a physical microphone mute button on the rear, which is great for privacy-conscious users.

“Google says that the new CPU also lets the Nest Hub to learn your most common commands over time, allowing the smart display to process them locally and speed up its responses”

The fabric-covered speaker portion of the Nest Hub once again sits under the display just like its predecessor. While this isn’t a bad design and the 2nd-gen Nest Hub remains a sleek-looking smart display, I can’t help but sometimes want to adjust the angle of its screen.

Though the angle the Nest Hub (2021)’s display sits at is generally fine, there have been a few instances where I wanted to pull the display forward a little bit when trying to finish off a YouTube video before going to sleep. However, this isn’t something a lot of people will likely use the Nest Hub for. 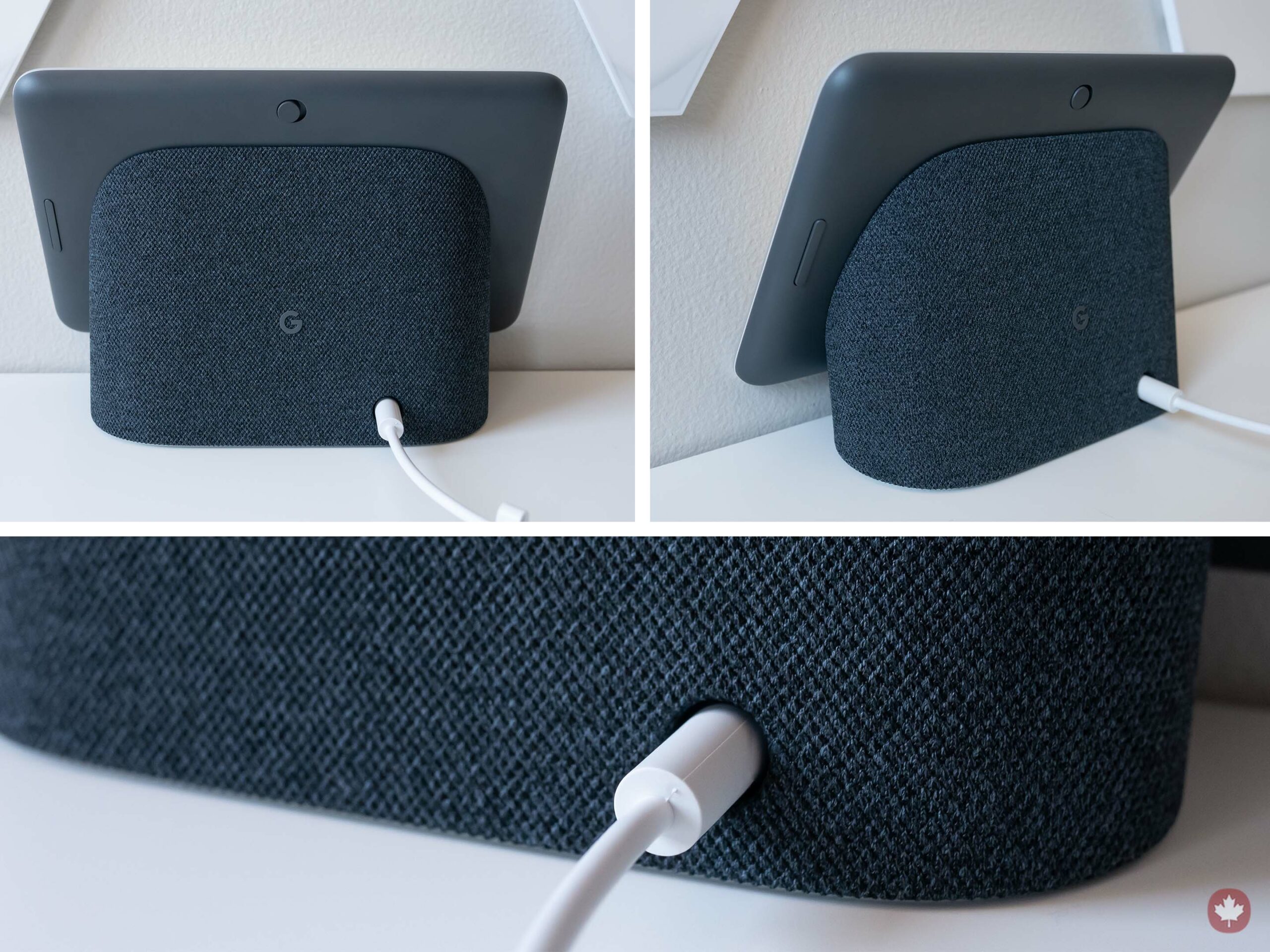 In terms of its internal hardware, the 2nd-gen Nest Hub is — as you may have already guessed — also nearly identical to the 1st-gen version of the Smart Display, save for a few notable improvements.

For example, the LCD display still measures in at 7-inches with a 1024- x 600-pixel resolution — a great size for a kitchen screen or a bedside alarm clock. If you’re looking for a smart display with a larger screen and a camera for video calls, you’ll likely want to opt for the Echo Show 10 or even the Nest Hub Max, though Google likely has an upgraded version of the latter device currently in the works.

Of course, there are the expected sound quality upgrades that come with every new version of a smart speaker, but the most significant new feature is one I didn’t expect to affect the 2nd-gen Nest Hub as much as it actually does: the Nest Hub (2021)’s faster CPU. 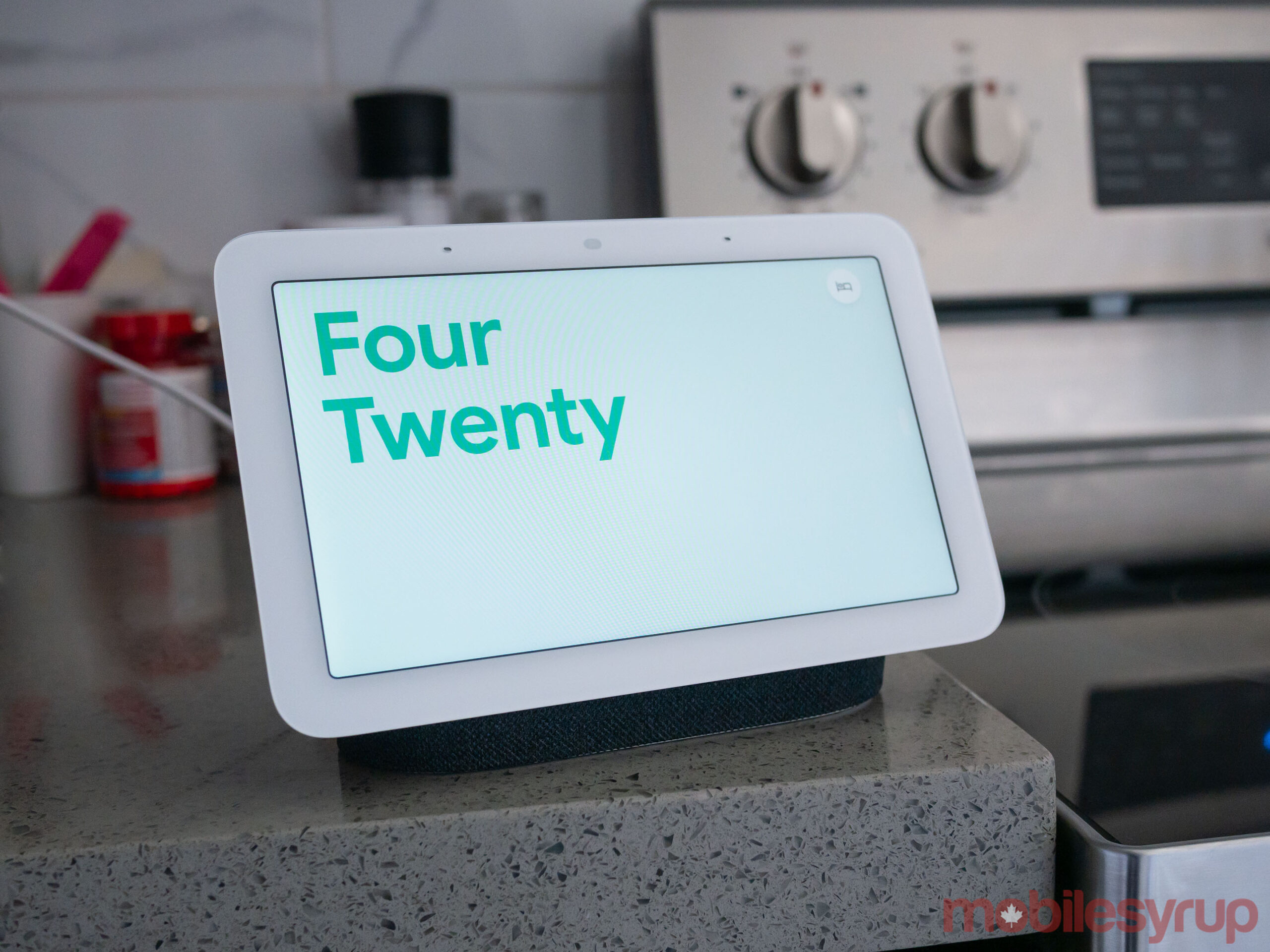 This makes the smart speaker’s response to voice commands snappier and, more importantly, removes the lag I sometimes experience when using the 1st-gen Nest Hub’s display. Since the last major update to the 1st-gen smart home speaker that revamped its user interface and added useful ‘Your morning,’ ‘Your afternoon’ and ‘Your evening’ pages, it almost feels like it’s stuck in quicksand every time I attempt to interact with its touchscreen. With the Nest Hub (2021), launching a YouTube video, turning lights on/off or checking out your sleep tracking activity (more on this later) feels just as responsive as swiping through an Android or iOS smartphone.

Google says the new CPU also lets the Nest Hub learn your most common commands over time, allowing the smart display to process them locally and in turn, speed up how quickly it responds. In my experience, this seems to be true, though because the Nest Hub (2021) features a screen, I found myself interacting with it more through touch controls than voice commands.

There’s also a Thread radio in the new Nest Hub that Google says isn’t active at launch. While this future-proofs the device if Thread becomes a more popular way to connect to smart home devices in the future, it’s also strange the feature isn’t yet active. 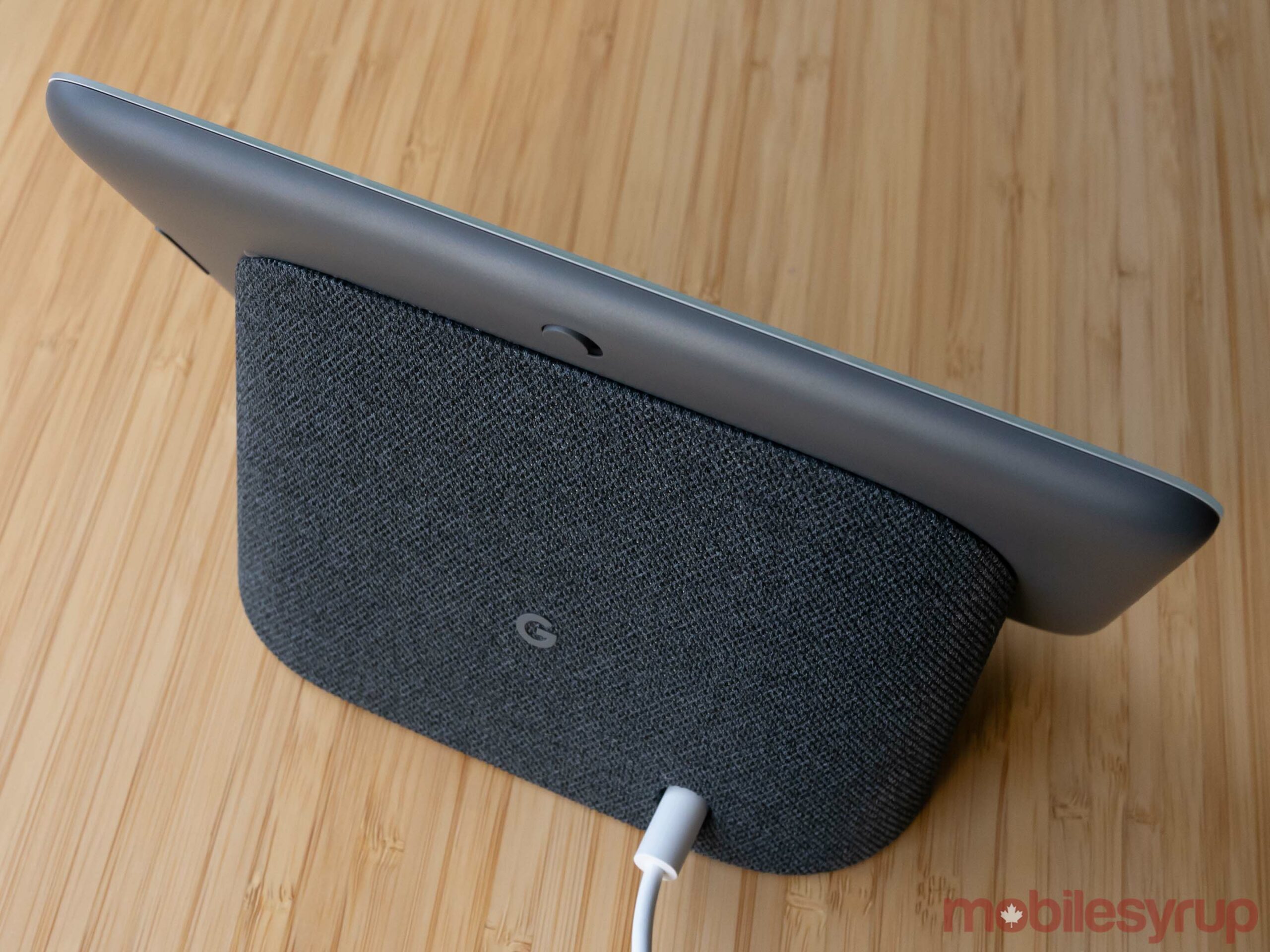 Other upgrades include three far-field microphones instead of two. This makes the Nest Hub (2021) a little more attentive to my commands. For example, it can now easily hear me down the hallway when I ask it to turn on my bedside lamp that features a Philips Hue smart bulb.

Regarding audio quality — arguably any smart speaker’s most important feature — the 2nd-gen Nest Hub sounds marginally better than its predecessor, thanks to what Google says is a sound profile similar to the Nest Audio’s. Music overall seems to sound a little fuller and more pronounced, but there isn’t much bass, and the quality doesn’t come close to comparing to the excellent-sounding Nest Audio. 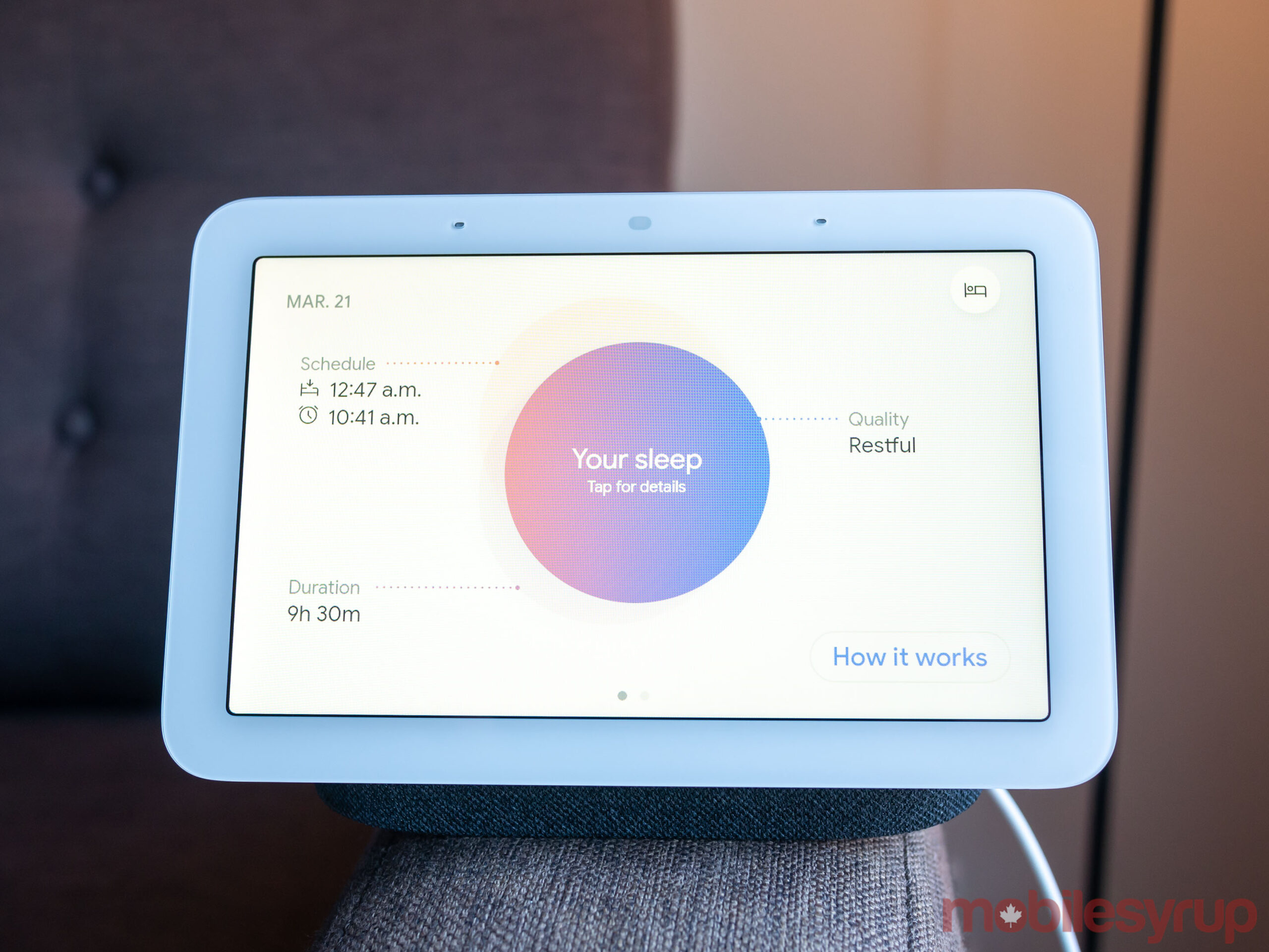 At this point, you’re likely wondering why Google released a new version of the Nest Hub if the CPU update is the only notable feature that changes anything significant about the user experience.

This is where the Nest Hub (2021)’s Soli-powered ‘Sleep Sensing’ functionality comes in. Though Google’s Soli sensor wasn’t featured in the Pixel 5, the company made a big deal about it when the Pixel 4 series released back in 2019. While being able to wave your hands around in front of your smartphone to navigate certain apps is an undeniably cool party trick, it definitely didn’t feel like a natural use of the technology.

With its latest smart display, Google has taken its Soli chip and added it to the 2nd-gen Nest Hub through a sensor located on the top of the device above its display. This allows it to record your sleep schedule and offer information related to how long, restful and consistent your rest was. As someone who has always felt he doesn’t sleep well but has never comfortably worn a Fitbit or smartwatch to bed, this feature intrigued me when it was first announced. 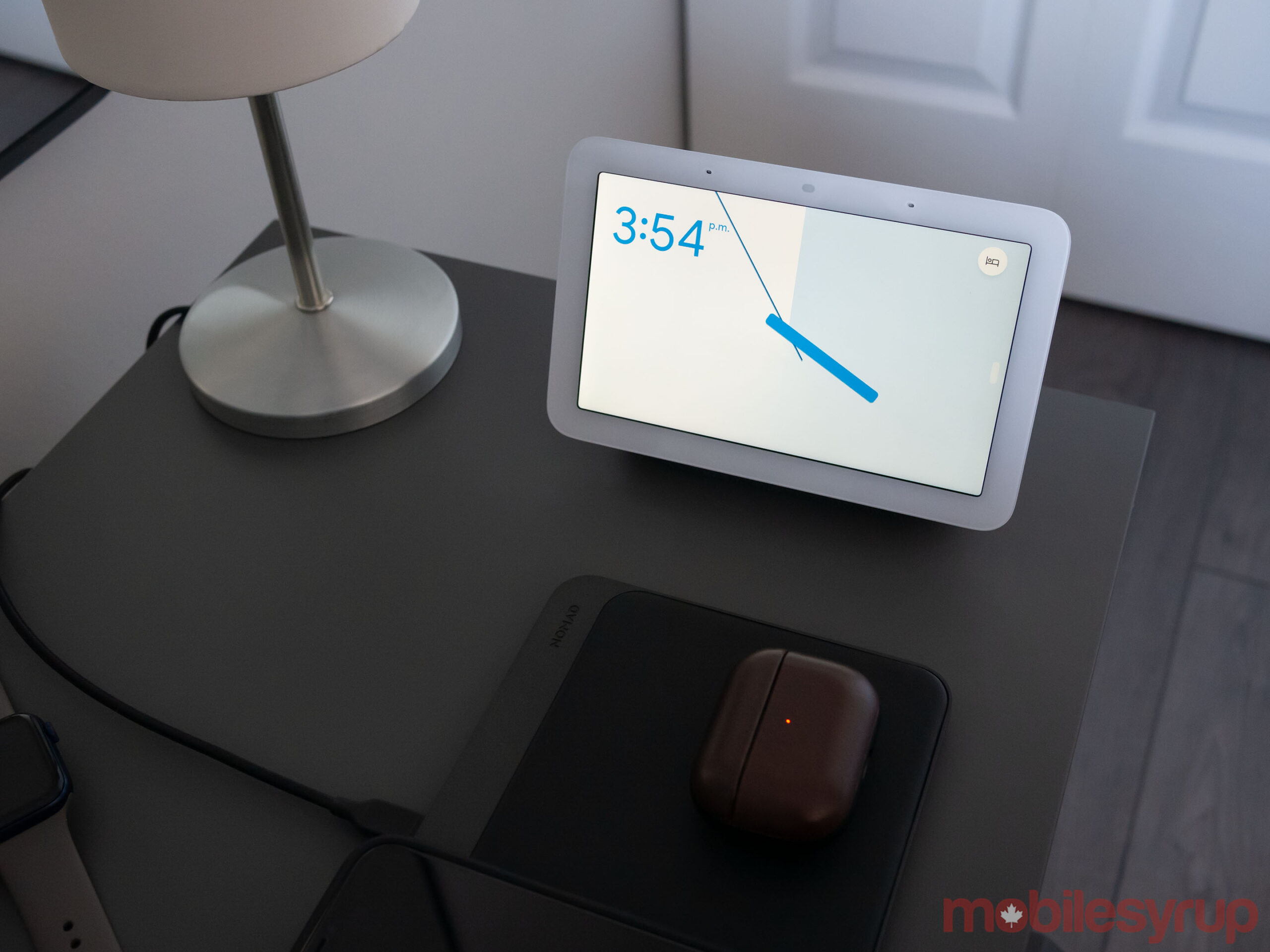 After a very brief setup designed to ensure the device only tracks your sleep habits and not your partner’s, sleep tracking is set up and ready to go. It tells you precisely when you went to bed, how long it took you to fall asleep (I spend far too much time on my phone before bed), whether you snored or coughed, and if you got out of bed during the night. That said, the Nest Hub doesn’t look at your traditional sleep cycle pattern like other similar wearable devices — deep, light and REM — though Google says this could change in the future.

On the privacy side, Google claims its Soli sensor isn’t a camera and that data captured by the 2nd-gen Nest Hub is a spectrogram and not actual video footage. Further, the company says that audio and other data is stored directly on the Nest Hub (2021) and isn’t sent to the cloud. 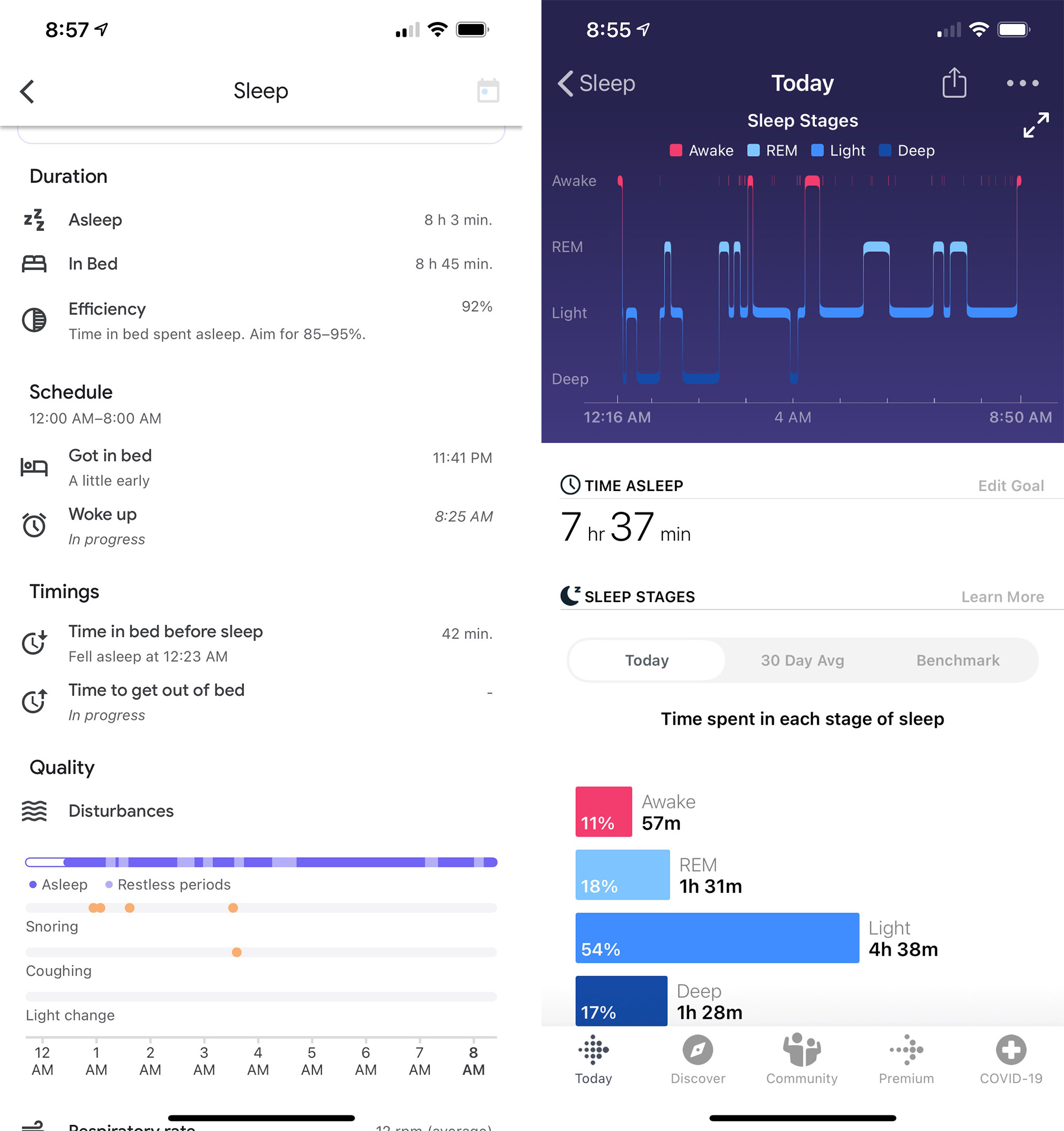 The Nest Hub’s sleep tracking results are on the left and the Fitbit Versa 2’s are on the right. Data from both of these screenshots was gathered during the same night.

However, the time you woke up, went to bed, coughed and other similar data is sent to the cloud and is accessible through Google’s Fit app on iOS or Android. This information can also be viewed directly on the Nest Hub (2021).

Similar to other sleep tracking devices, you have to take Google’s word on how accurate the technology is, as well as whether it’s able to differentiate between your own movement and noises and your partner’s. The Fitbit Versa 2 automatically detects sleep through heart rate variability (HRV), and its results, when compared to the Nest Hub (2021), are somewhat similar. For example, I woke up at 4am in the middle of a nightmare, and that was reflected by both the 2nd-gen Nest Hub and the Fitbit Versa 2 (see the screenshots above).

There’s also the issue of ‘okay, I have all this sleep data now, but what do I do with it?’ that I’ve encountered with other fitness-focused wearables that offer similar data.

I might get decent sleep according to the Nest Hub (2021), but is it an issue that I sometimes snore for up to 15 minutes per night? If I wanted to fix that problem, is there anything I can actually do? These aren’t questions the Nest Hub (2020) really helps answer.

However, Google offers subtle suggestions for improving your sleep through a partnership with the American Academy of Sleep Medicine (AASM). For example, if you have a sporadic sleep schedule, the 2nd-gen Nest Hub will suggest you try to make it more consistent since studies show that can help with getting better sleep.

“Soli can also be used to navigate the device’s user interface, which can sometimes come in handy when it actually works…”

It’s important to note that Google says Sleep Sensing is available as a free preview for all 2nd-gen Nest Hub owners until next year. It’s unclear how much Google will eventually charge to use sleep tracking, but it’ll likely be in some way linked to Fitbit’s subscription service that costs $9.99 per month or $79.99 per year.

With this in mind, if you’re considering getting the Nest Hub (2021) just for sleep tracking, there’s a possibility the feature could eventually be locked behind a subscription at some point in the future.

Soli can also be used to navigate the device’s user interface, which can sometimes come in handy when it actually works if you’re trying to perform a task like setting an alarm or timer quickly. However, I find that it doesn’t work reliably all the time, similar to the Pixel 4. 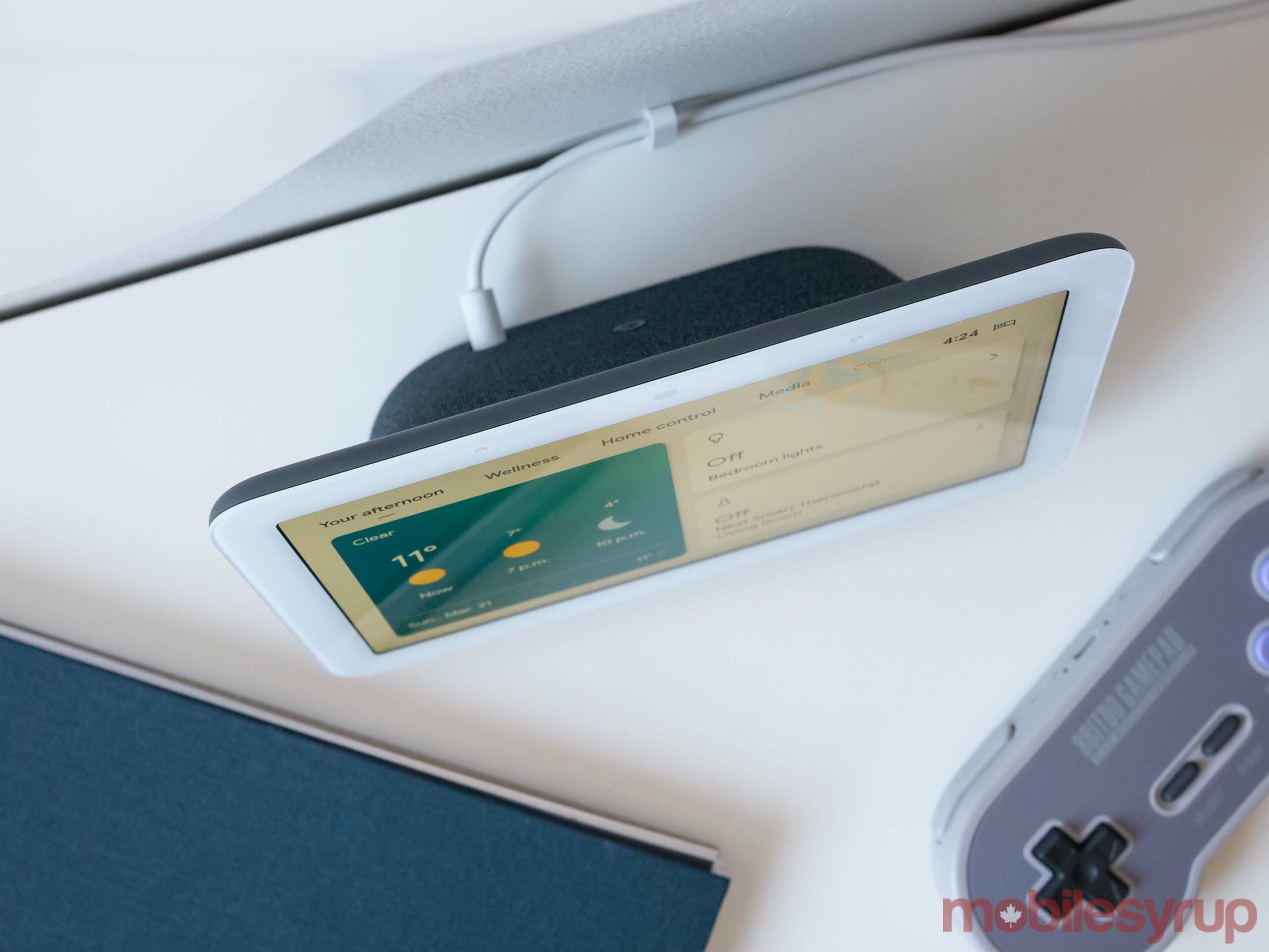 Do you care about sleep tracking?

If you own the first-gen Nest Hub, the 2nd-gen version of the smart display likely doesn't offer enough of an upgrade to warrant a purchase, unless you're really interested in seamless sleep tracking that you may have to pay extra for at a later date.

That's not to say that there aren't improvements, because the processor update is notable if you interact with the smart speaker's touchscreen often.

Overall, the Nest Hub (2021) offers one of the most complete smart speaker packages currently available, especially as far as smart displays are concerned. That said, if sleep tracking and a display don't appeal to you, most people would likely be better off with a Nest Audio or an Echo smart speaker.

The second-gen Nest Hub is now available for for $129 through the Google Store and other Canadian retailers. The smart display releases on March 30th.

"If you own the first-gen Nest Hub, the 2nd-gen version of the smart display likely doesn't offer enough of an upgrade to warrant a purchase -- unless you're really interested in seamless sleep tracking"