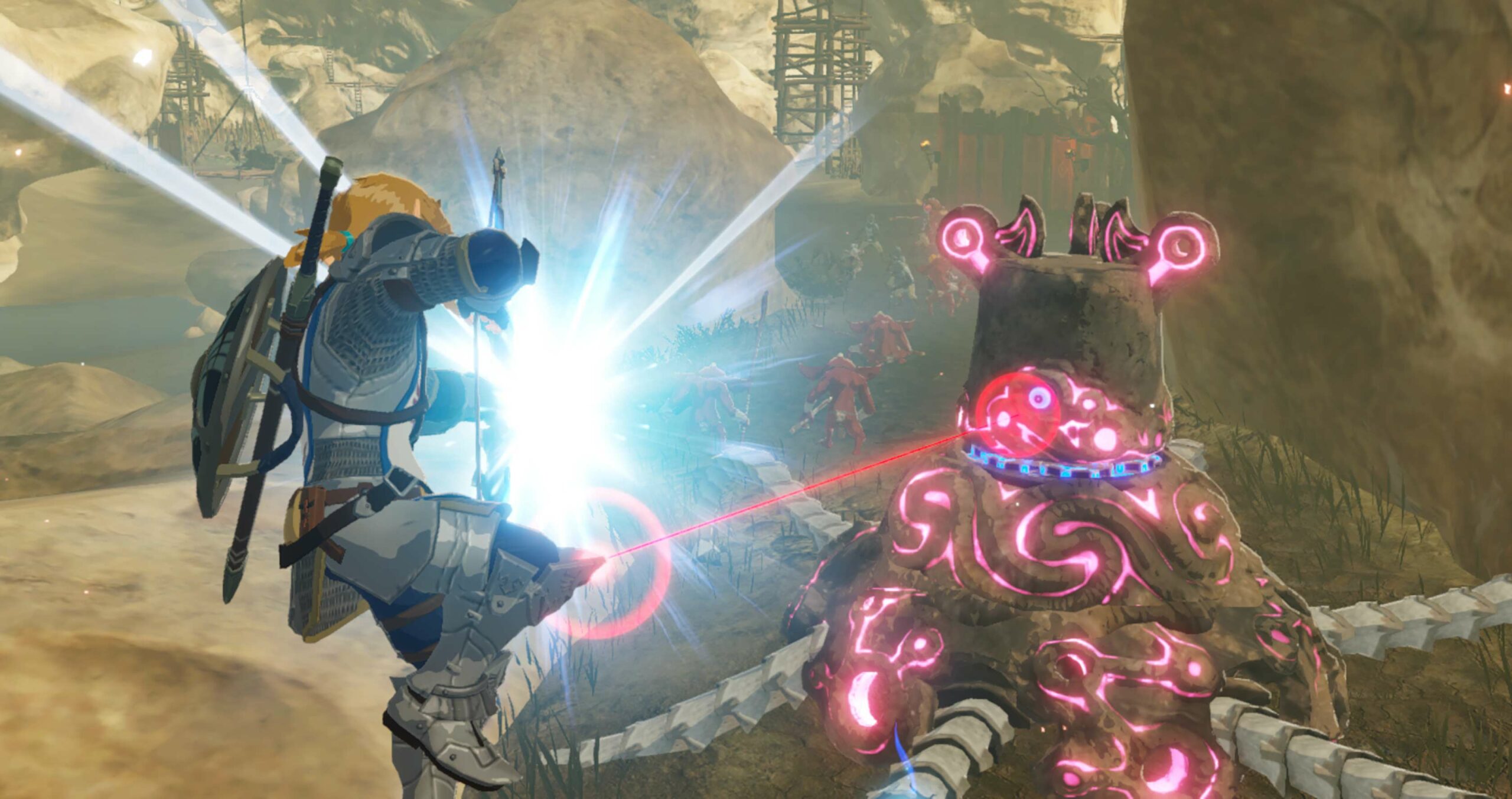 One of the most overlooked games from the Wii U was Hyrule Warriors, a remarkably solid game that wonderfully mixed the iconic characters and world of The Legend of Zelda with the frenetic, over-the-top combat of Dynasty Warriors.

Now, Nintendo has re-teamed with longtime Warriors developer Omega Force for a new Zelda–Dynasty Warriors crossover, Hyrule Warriors: Age of Calamity. However, this one’s arguably much more interesting than the original Hyrule Warriors, in that it’s actually a prequel to beloved Switch title The Legend of Zelda: Breath of the Wild (BOTW).

By taking this approach, Omega Force has delivered a Hyrule Warriors experience that serves as both a meaningful iteration on the original and a splendid companion to BOTW.

An age of heroes

Set 100 years before the events of BOTW, Age of Calamity follows Link, Zelda and friends during their ill-fated quest to save Hyrule from Calamity Ganon’s forces. While we know the inevitable outcome of this conflict, it’s still a strong premise that offers a fascinating deep dive into the world of BOTW.

Of course, BOTW was very deliberately set after the Calamity to lend Hyrule an appropriately barren and mysterious vibe. At the same time, this conceit ensured that you really only had the odd cutscene or bit of dialogue to offer glimpses at what Hyrule and its inhabitants were like beforehand. 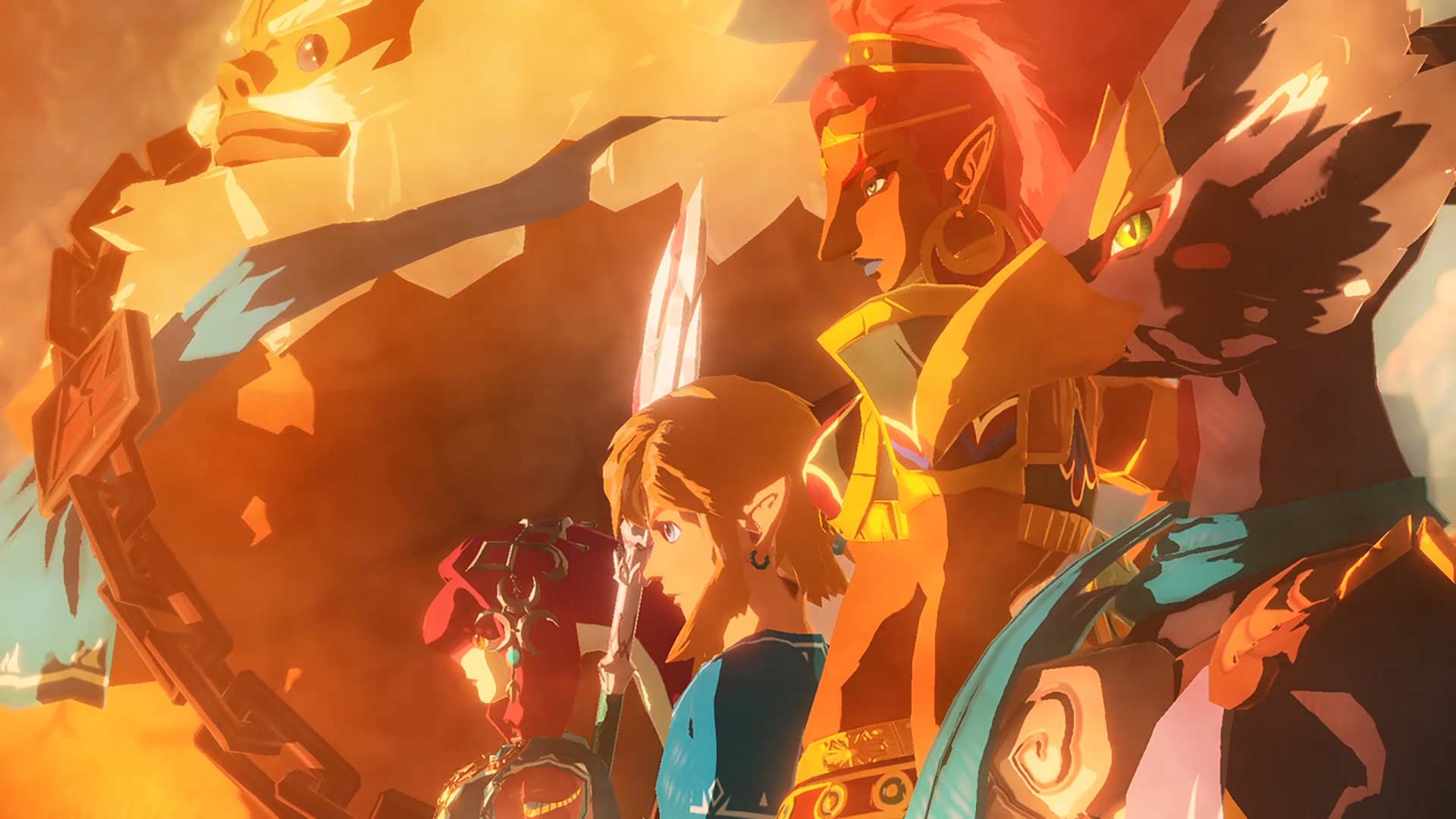 In Age of Calamity, you actually experience all of this yourself — with BOTW‘s gorgeous cel-shaded visuals, to boot. What this means is that you get to follow Link’s progression from simple royal guard to Zelda’s legendary warrior, all while getting greater insight into the pair’s relationship. This extends to seeing Link and Zelda first encounters with BOTW‘s memorable Four Champions — Daruk, Mipha, Revali and Urbosa — who continue to be as charming as ever.

I especially appreciated getting to see Zelda’s adviser Impa in all of her youthful exuberance — a welcome contrast to the elderly, sagely role she plays in BOTW. Of course, it’s also nice to see many familiar places from BOTW under different circumstances, like Hyrule Castle, Death Mountain and Gerudo Town. At the same time, there’s a palpable sense of dread at play here in knowing that our heroes are doomed to fail, which gives Age of Calamity a dramatically distinctive tone.

Much more than a BOTW coat of paint

As was the case in the first Hyrule Warriors, Omega Force has done a commendable job making each character feel unique. Link fights with the same sort of up-close-and-personal sword slashes, twirls and arrows that you’d expect. This is in stark contrast to Zelda, who actually uses different combinations of the various Runes from BOTW as her standard attacks, or Impa who uses ninjutsu to zip around for speedy strikes. 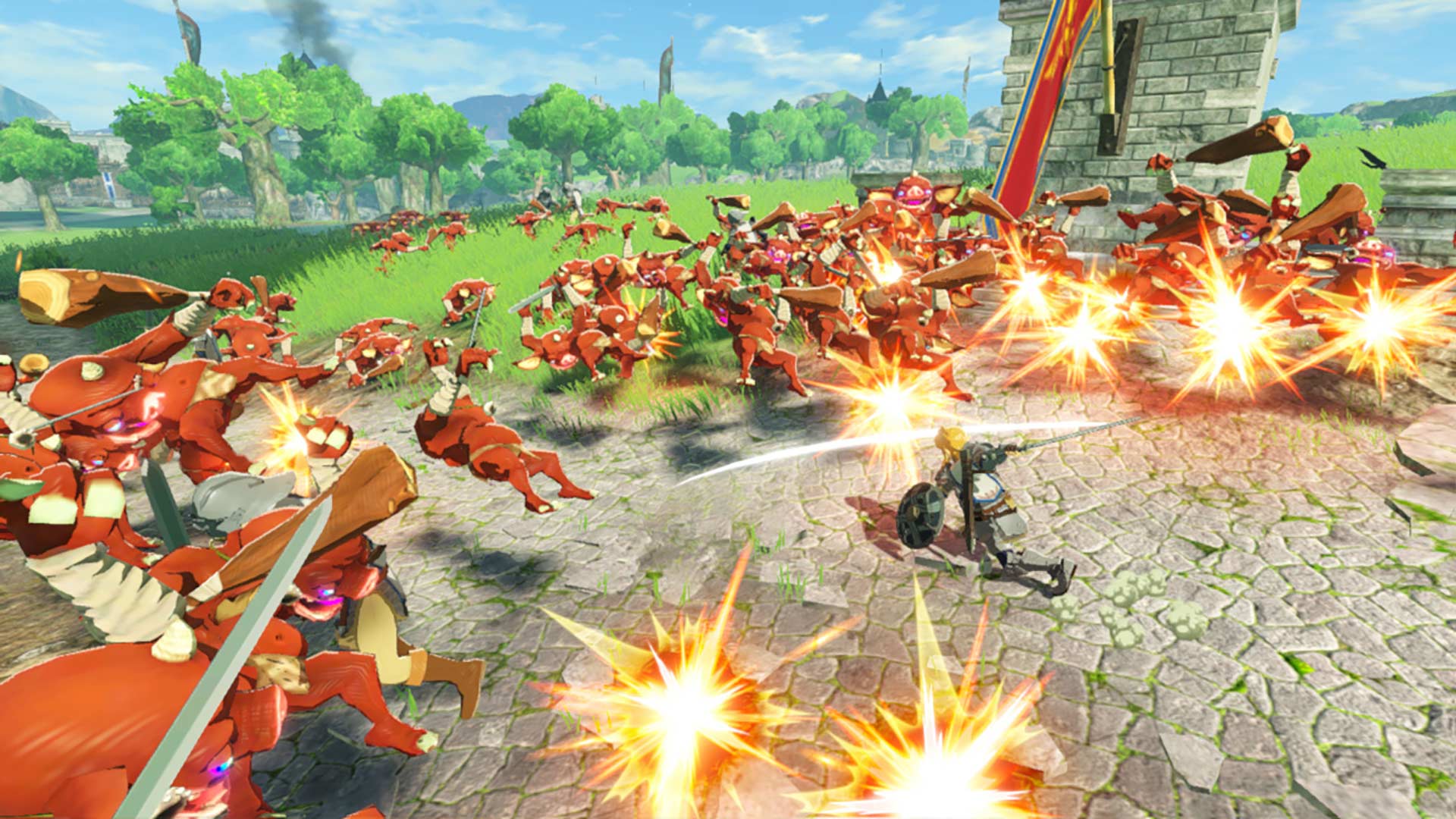 On top of that, Omega Force shakes things up by translating many of BOTW‘s core mechanics into Age of Calamity‘s combat. This means you can shield surf or use a Paraglider for added mobility, depending on the character. Everyone can also perform BOTW‘s Flurry Rush counter by pulling off a well-timed dodge for added damage. These are all smart ways in which Age of Calamity is mechanically connected to BOTW.

For example, the Stasis Rune is particularly useful in crowd control, as you can temporarily freeze a group of enemies and then send them flying in different directions once time resumes, just as they would in BOTW. On the other hand, the Cryonis pillar is a quick and effective way to shift to aerial combat and even evade grounded threats. And even though the Runes are shared between each of Age of Calamity‘s characters, they’re used in uniquely fulfilling ways by each of them. As Link, you have to aim and throw four Bombs in rapid succession, which can be quite damaging and requires precision. This feels quite different from Daruk, whose Bombs break up into smaller explosives for a sort of wider-reaching chain reaction. 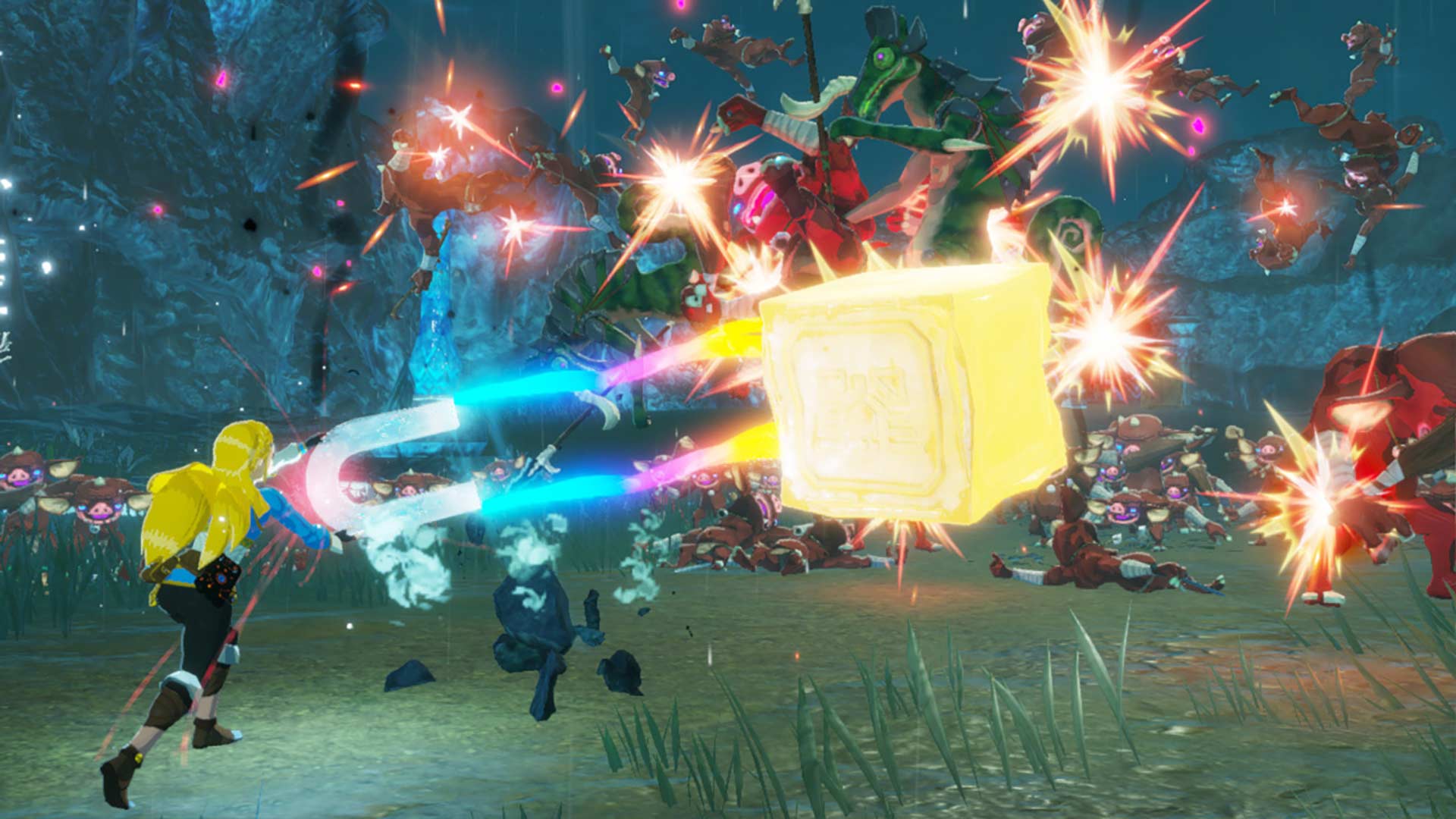 These mechanics all work together seamlessly to make combat feel surprisingly fluid. Performing a quick flurry of slashes on Bokoblin grunts before launching them into the air with a Cryonis ice pillar to finish my combo, only to Paraglide away once they’re done never stops feeling satisfying. Being able to switch over to Mipha for stunning water-based attacks or to Daruk to Goron-roll through crowds like bowling pins is just icing on the cake. Throughout all of this, you’re free to use weapons without fear of them breaking, which was easily BOTW‘s most tedious and frustrating mechanic.

Mission variety also feels like a nice step up from the first Hyrule Warriors. Having to switch between my party to power up disabled Guardians to repel the very live one that’s currently attacking me — all to the tune of BOTW‘s effectively stress-inducing Guardian battle theme, no less — is absolutely thrilling. Other times, you get to actually command BOTW‘s Divine Beasts in immensely pleasurable, large-scale battles. Considering these Beasts were once massive puzzle-filled dungeons you had to work your way through, it’s good fun to have them be powerful weapons at your disposal here.

In between missions, you can also complete miscellaneous quests for better weapons and resources, adding a rewarding RPG-lite progression system to the proceedings. There are also various training missions focused on different moves, which is a great way to experiment with them between missions. 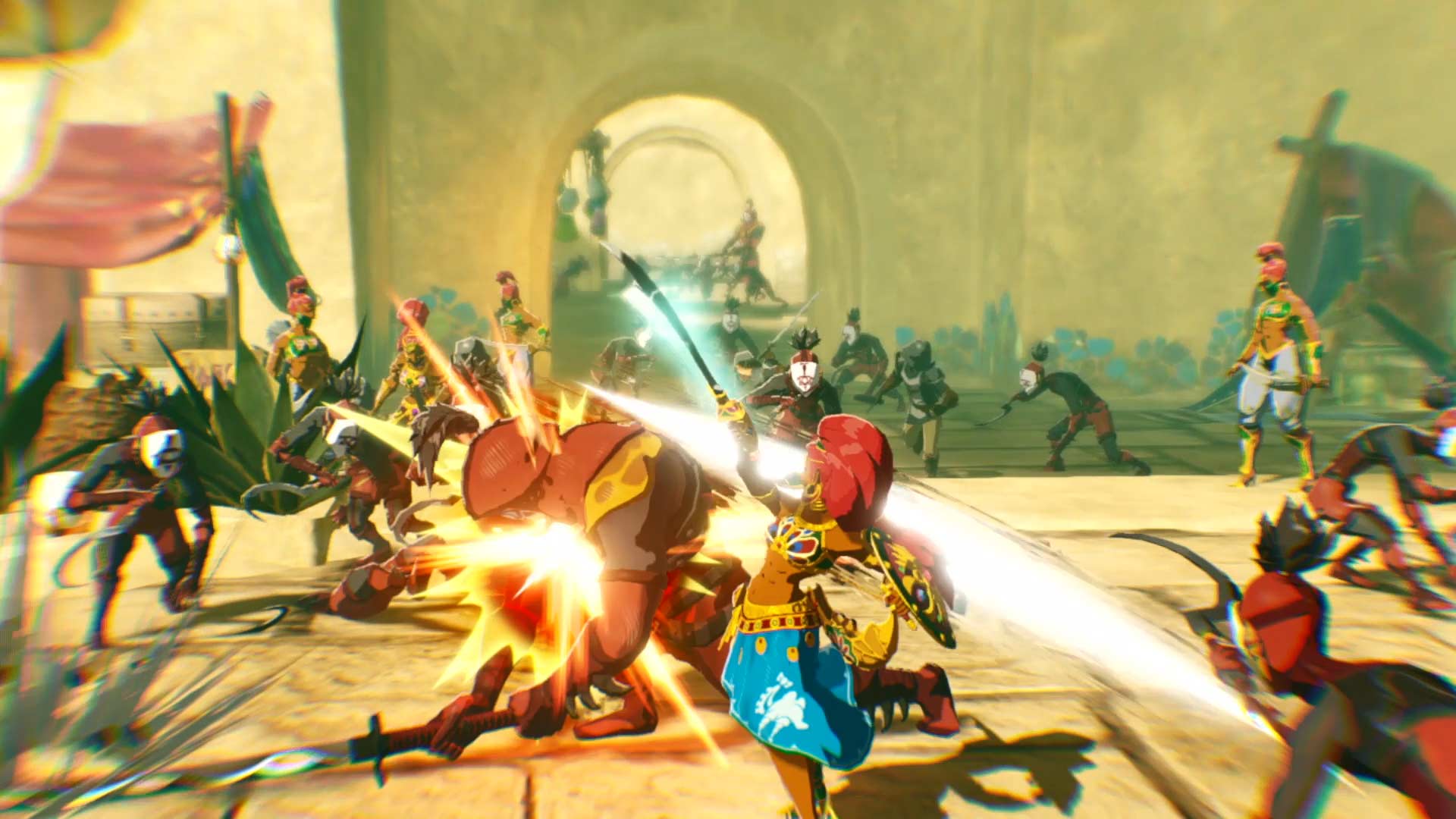 Given how engaging the whole gameplay loop proves to be, it’s unfortunate, then, that it’s not so easy to play with others. That’s because Age of Calamity only supports two-player local co-op — an especially disappointing restriction as friends remain separated amid the COVID-19 pandemic. I’d absolutely see myself coming back to play with a friend, so hopefully, online co-op gets added in the future.

A worthy companion to a modern classic

As it stands, we have no idea when to expect the untitled Breath of the Wild sequel, given that it’s been M.I.A. since its June 2019 reveal, and the ongoing global pandemic is no doubt slowing development. That said, Age of Calamity is the perfect Zelda game that Nintendo could have released during this time. By expanding the world of BOTW, Age of Calamity adds rich context to the original game, while perhaps even teasing what might be in store for the future. What’s more, the satisfying core gameplay loop opens up the game to audiences beyond the already large contingent of BOTW fans.

The Calamity might be a harrowing time for Link and friends, but it’s an undeniably great one for Switch owners.

Hyrule Warriors: Age of Calamity will release exclusively on the Nintendo Switch on November 20th.