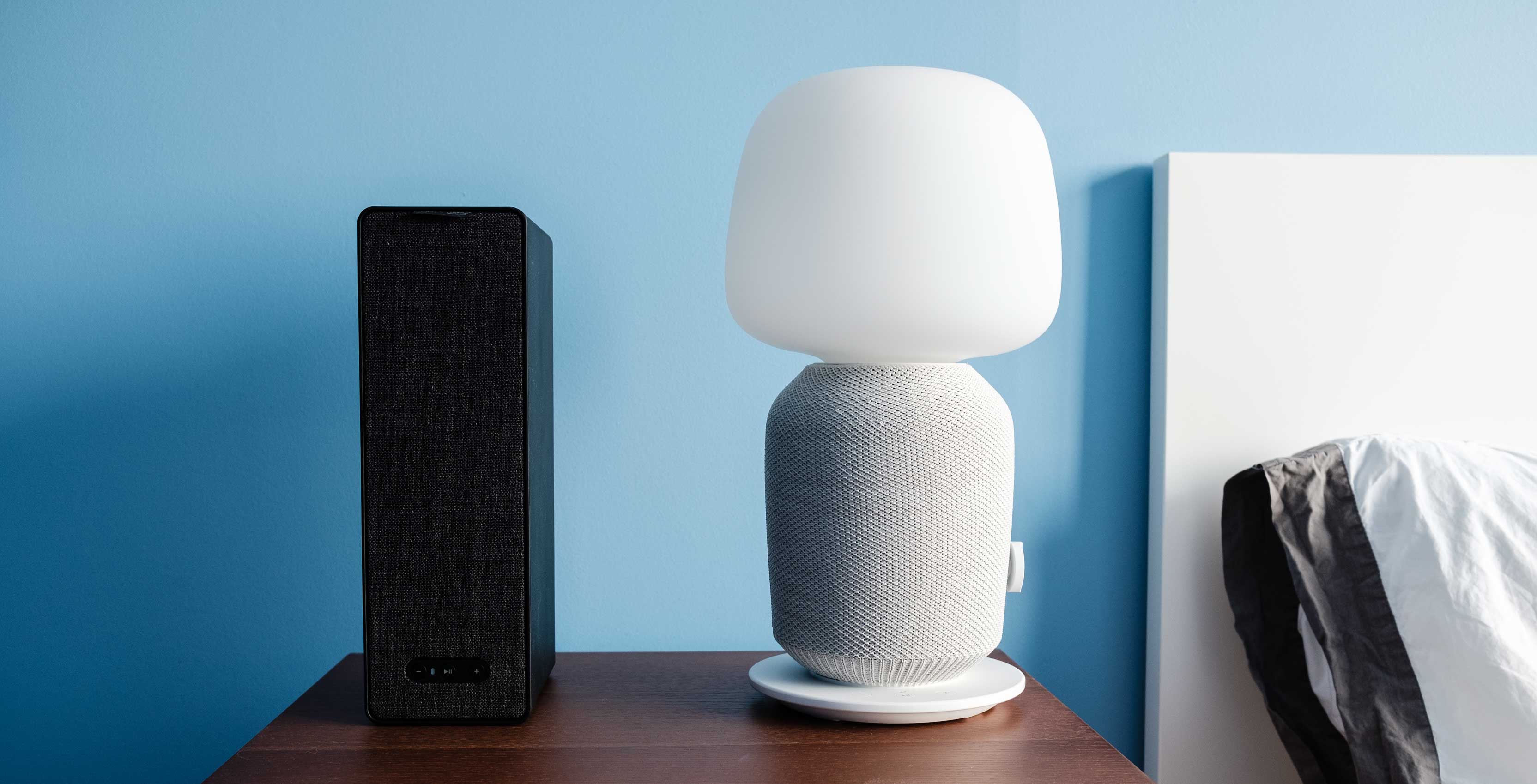 After months of teasing, one of the more unexpected tech collaborations in recent years is here. In a few short weeks, the Sonos + Ikea Symfonisk lineup of speakers will make their way Ikea stores across Canada.

If you haven’t followed the lead-up to Ikea’s announcement of the Symfonisk lineup, the premise of these devices is that each one is a piece of furniture in addition to a Sonos-powered speaker.

In this way, the Symfonisk lineup is designed to appeal to those who live in apartments and condos with limited space. Ikea plans to release more Symfonisk speakers in the future. However, for the moment, the lineup consists of two devices: a bookshelf and a table lamp.

The classic Ikea aesthetic, for better and worse 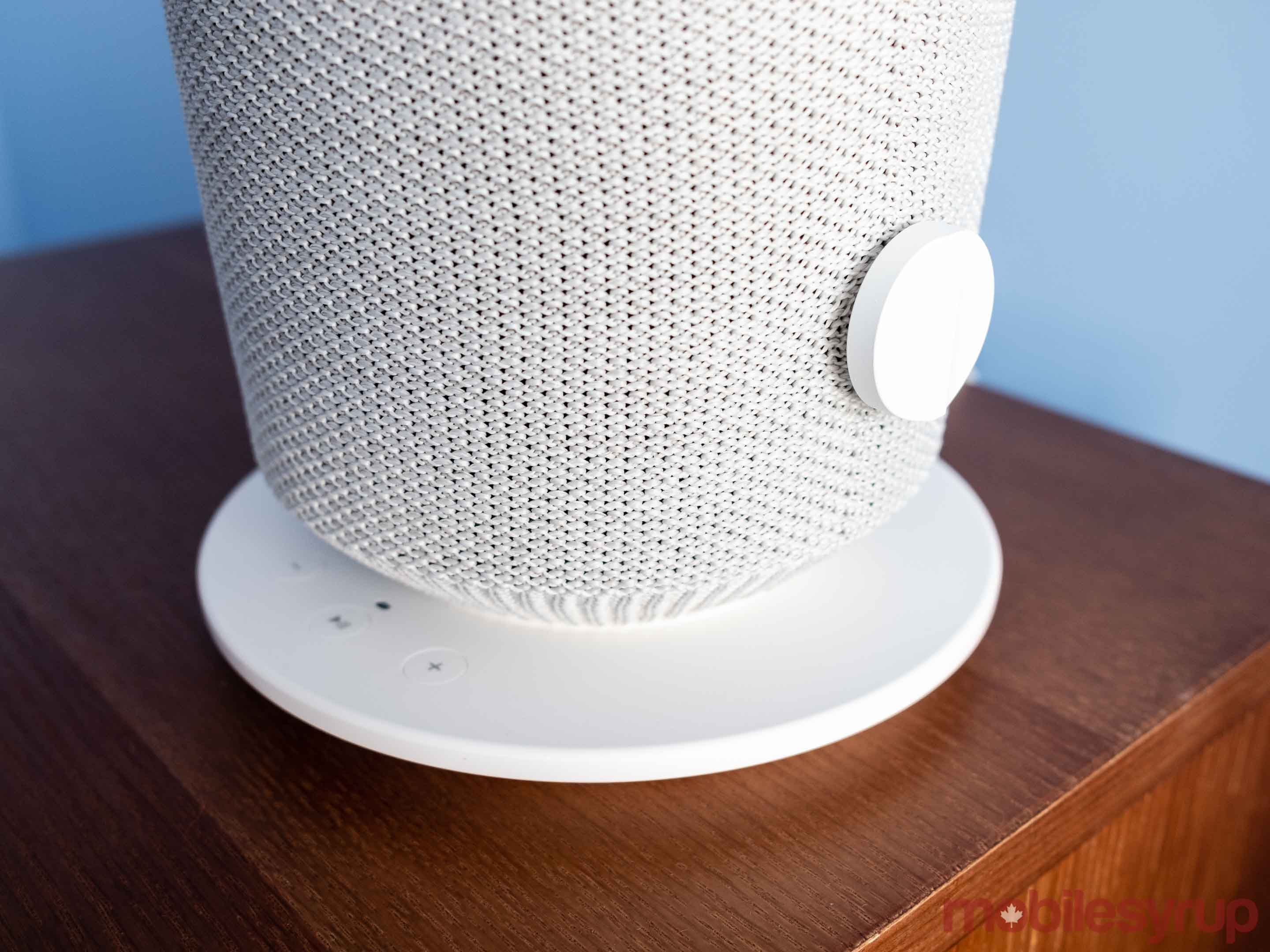 In practice, despite their different ‘form factors,’ the two speakers share a lot of similarities. For better and worse, the table lamp, which is the more expensive of the two speakers (it costs $249, instead of $149), doesn’t feature more premium materials. It’s made from the same combination of ABS plastic and fabric as its more affordable sibling. At $249, it’s also the same price as the Sonos One, which is made of metal and includes capacitive touch controls instead of physical buttons.

I don’t think Ikea achieved what it set out to do with the Symfonisk lineup, which was to create practical, multi-purpose furniture pieces.

Take the bookshelf speaker, for instance.

To mount it to a wall, you’ll need to purchase a set of mounting hooks and rails Ikea plans to sell alongside the new speaker separately. In Canada, those two components will cost $15 and $10 respectively. Sonos did not provide MobileSyrup with any of these accessories, and so I wasn’t able to mount the speaker to a wall in my condo. That said, even if I had the option to do so, I don’t think I would have used the Symfonisk speaker as a bookshelf.

I say that for two reasons.

To start, the Symfonisk speaker is small: at its widest, it measures in at 31cm with a depth of 15cm. What that means is that you can put, at most, two or three items on the top of the unit. In other words, it’s not a meaningful way to add storage to your home. What’s more, with an exterior made, as I said, mostly from plastic, the Symfonisk speaker doesn’t look particularly attractive as the centrepiece of a wall. From that perspective, it’s better to view the bookshelf speaker as an affordable entry into the Sonos ecosystem than a piece of furniture.

On that note, as a piece of furniture the table lamp is more compelling. 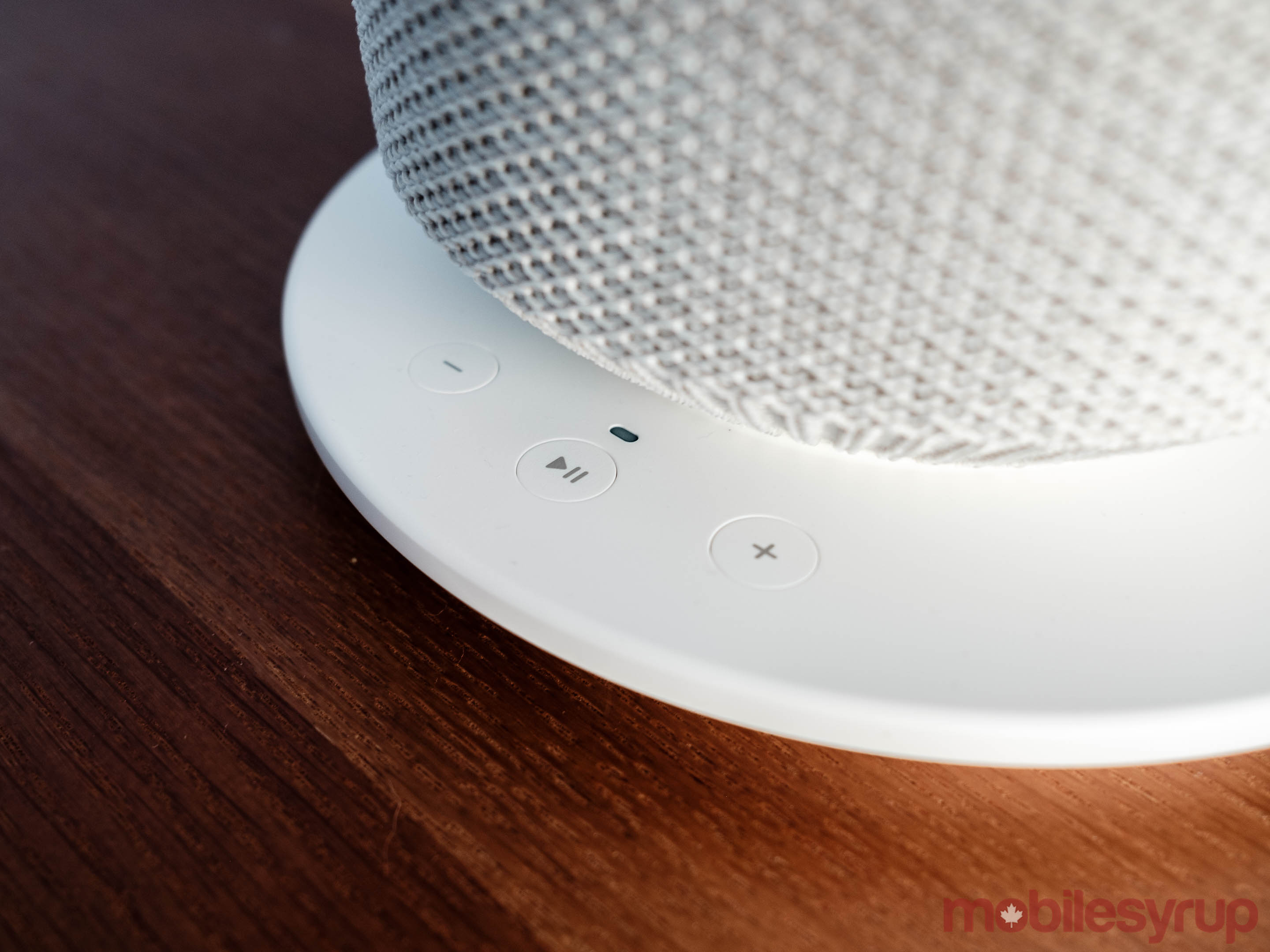 Out of the box, Ikea does not include a complimentary light bulb with its new table lamp, which is something the company clearly indicates on the packaging. It’s also worth noting the Symfonisk table lamp makes use of E12 light bulbs, not the more common E26 variety.

It’s possible to use the lamp without a working light bulb, but that would be a shame to do so as it gives off a beautiful light. Using the 400 lumens, 2,700 kelvin Ikea lightbulb Sonos provided to MobileSyrup, I found the Symfonisk table lamp added a pleasant and warm ambiance to my room.

That said, if there’s one issue with table lamp, it’s that it doesn’t look great.

Even though it matched the white, walnut and periwinkle decor of my bedroom, the table lamp stuck out like a sore thumb thanks its unusual and bulbous shape. Moreover, as with the bookshelf speaker, the fit and finish of the plastic, fabric and glass Ikea used to manufacture the table lamp makes the speaker look, at best, merely fine instead of sophisticated.

An almost perfect extension of the Sonos ecosystem 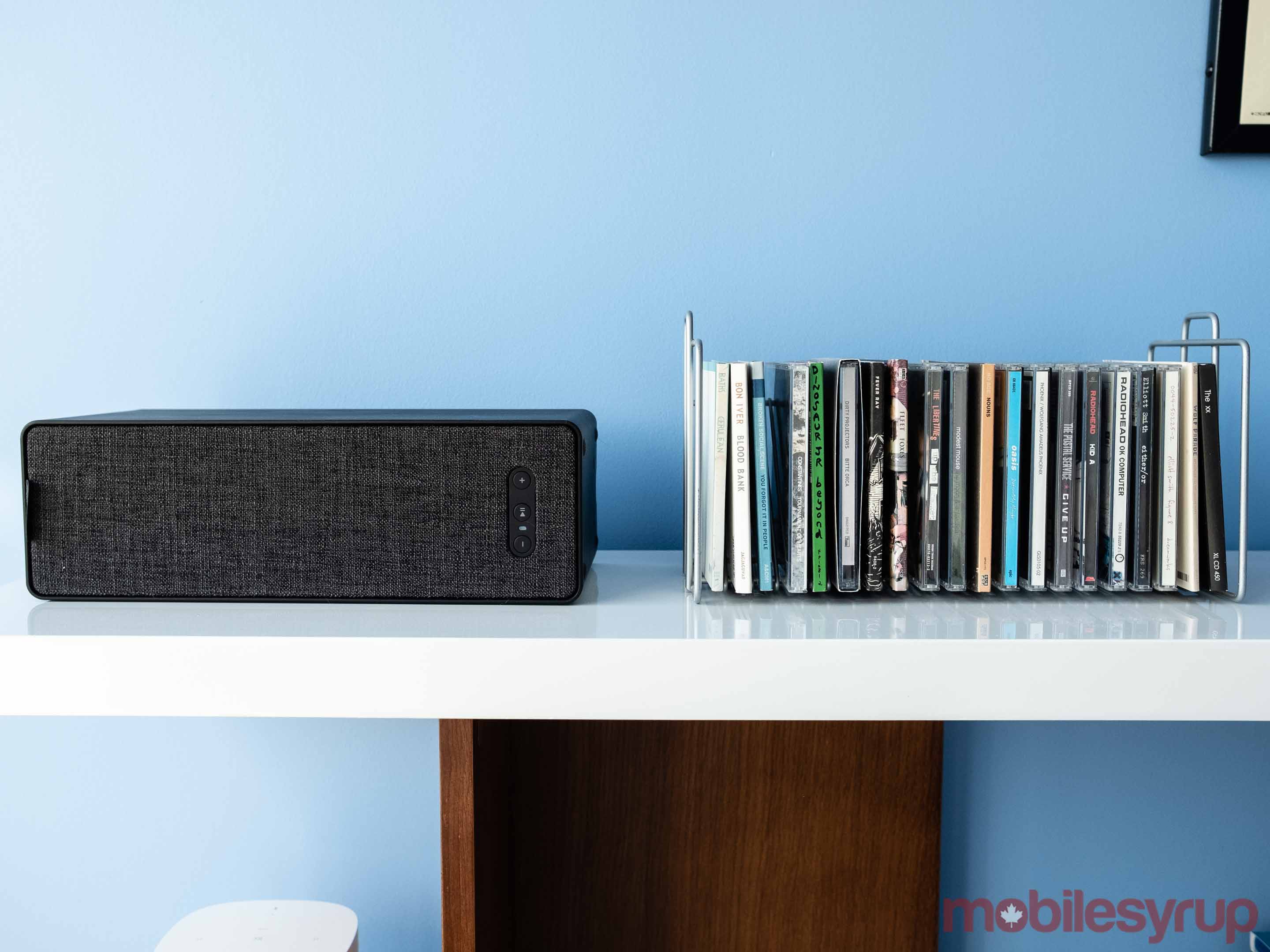 In contrast, there’s little to complain about the Symfonisk bookshelf and table lamp’s abilities as speakers.

The best part of Ikea’s execution here is that the speakers work through the Sonos app — available on Android and iOS, as well as Windows 10 and macOS.

The Sonos app makes setting up the Symfonisk speakers painless; there’s no convoluted set of Ikea instructions to puzzle over. Instead, once you’ve connected the speakers to a wall outlet and installed the Sonos app on your smartphone, the app will take care of the rest.

When I added the Symfonisk speakers to my existing Sonos setup, the entire process took a few short minutes in which all I had to do was place the speakers where I wanted, plug them into the power and press the play/pause and volume up buttons simultaneously. If you don’t already own a Sonos speaker, the process will take longer while you create a Sonos account, as well as add any one of the more than 100 streaming services the company supports currently.

Using a series of tabs along the top of the search interface, it’s possible to narrow down search results to specific artists, albums, songs and so on. Search results can sometimes be too granular and juggling multiple services at the same time can potentially make finding a specific song take more taps than it should. Sonos combats this by making a ‘My Sonos’ tab the centrepiece of its interface.

Here, individuals can add their favourite artists, albums and playlists, as well as reorganize the order in which they appear. The elegance of this part of the interface is that content from different services lives side-by-side. In this way, it’s possible, for example, to see and switch between playlists from Spotify and Google Play all from one carousel. Additionally, it easy to use multiple devices to control the speakers. Using myself as an example, I frequently used both my Pixel 3 and iPad Pro to queue up music on the Symfonisk lineup without issue. 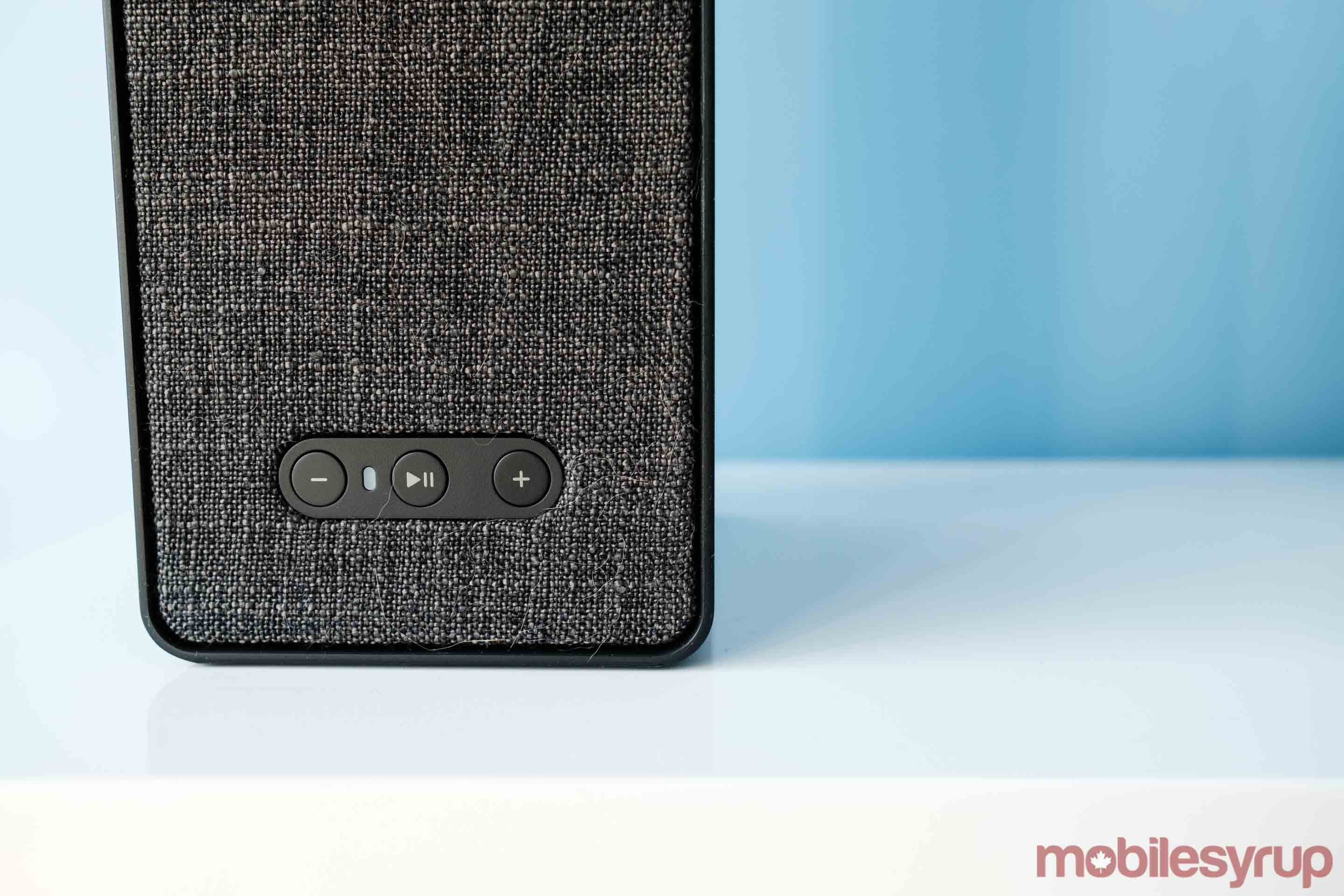 If the Sonos app isn’t doesn’t do it for you and you own an iOS device, you can safely ignore it thanks to the fact both Symfonisk speakers support AirPlay 2.

AirPlay 2 allows Apple device owners to stream audio, including sound from non-music apps, to a compatible speaker. In this way, not only is it possible to listen to music with AirPlay 2, it’s just as easy to stream podcasts and audio from movies and TV shows. Additionally, AirPlay 2 allows one to use Siri, instead of Google Assistant or Alexa, to control the speakers — though you’ll need to speak to your iOS device, not the speakers, to do so.

In practice, AirPlay streaming doesn’t work as seamless as the Sonos app for switching between tracks; there’s a noticeable, seconds-long delay as the protocol processes a command and communicates it to a speaker. However, where AirPlay 2 shines is with its ability to stream from non-music apps. One of the things I loved to do while reviewing the Symfonisk speakers was to sit down in my bedroom, where I had the table lamp on my bookshelf, and stream audio from my iPad Pro.

Sonos also recently updated its mobile app to integrate TruePlay, which was previously a separate utility on the App Store. If you have access to an iOS device, whether that be an iPhone, iPad or iPod Touch, you can use TruePlay to tune the new Symfonisk speakers. With a bit of awkward waving around of your iOS device, the Sonos app will measure and adjust the frequency response of the speakers to the acoustics of the room in which you’ve placed them. After tuning both Symfonisk speakers, I noticed a small but definite increase in clarity.

Neither speaker includes any microphones. However, both are compatible with Google Home and Amazon Alexa. In that way, you can use Assistant or Alexa on another device that does feature a microphone, giving you yet another way to control the speakers. 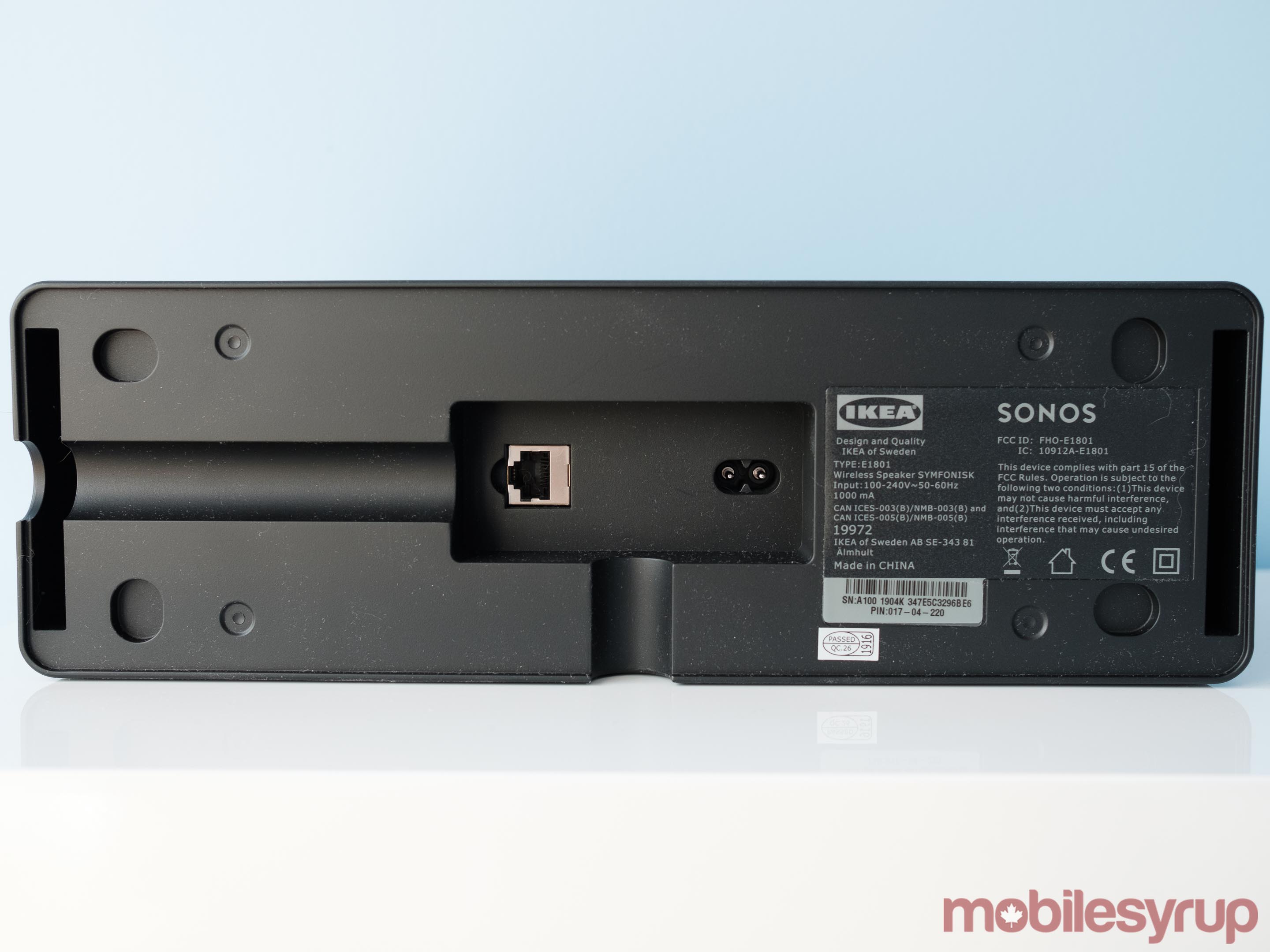 From a platform perspective, where the Symfonisk speakers falter is that Sonos has implemented oddly specific stereo pairing limitations.

The inability to stereo pair a Sonos One and Symfonisk bookshelf or table lamp is particularly baffling given that all three speakers, as I detail below, feature the same internals. This is not a new limitation for Sonos: it’s similarly not possible to stereo pair the Sonos One and Play:1 together, though they too share the same internals. To date, the company has yet to provide a compelling reason why its customers can’t mix and match speakers to create stereo pairs.

Great sound, at a great price 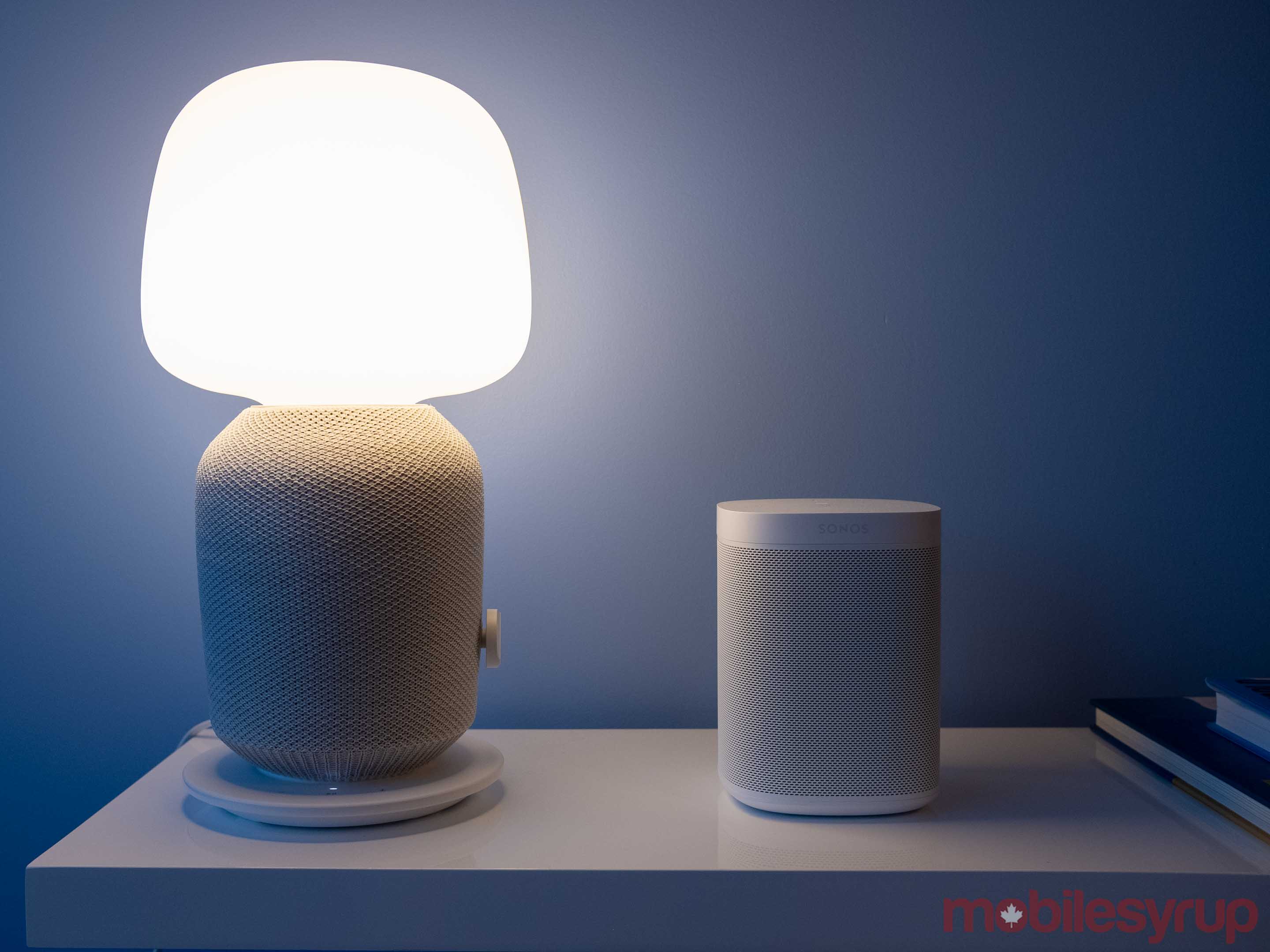 Inside, the Symfonisk table lamp features two class-D digital amplifies, a single tweeter and one mid-woofer. This is the same configuration of speaker components as the Sonos One. To my — admittedly untrained — ears, the two speakers sound identical. The table lamp delivers crisp mids and highs with just enough bass to make its presence felt. At high volumes, the speaker doesn’t distort, which was, going into this review, an area I thought the Symfonisk speakers might falter.

What’s surprising here is that the Symfonisk bookshelf features the same components as well. We’ll have to wait for a teardown to reveal if and where Sonos and Ikea cut corners.

There were moments where I thought the speaker sounded less full and assertive than its more expensive counterpart, but overall it’s an impressive-sounding kit. For the price, I don’t think there’s a better sounding Wi-Fi enabled speaker out on the market.

I struggled for a while deciding how to score these devices. I think they're great speakers, but I'm less convinced that someone should buy either the bookshelf or table lamp as a piece of furniture.

To my mind, a piece of furniture should be both beautiful and functional. Ikea is known for making affordable -- and yes, at times, cheap -- furniture. But the company also has a knack for producing pieces that are both clever and practical. For me, Ikea's new Symfonisk speakers never quite matched the elegance and usefulness of something like the company's Malm bed.

Maybe none of that matters as long as you go into these devices with the right expectations. They're first and foremost affordable entries into Sonos' ecosystem, home accessories second.

"I think they're great speakers, but I'm less convinced that someone should buy either the bookshelf or table lamp as a piece of furniture."