After testing out a new performance widget in the Xbox Game Bar earlier this month, Microsoft is rolling it out to gamers on Windows 10.

Xbox Game Bar, for those unfamiliar with it, is an overlay that PC gamers and call up by tapping the Windows key + ‘G’ on their keyboard. The overlay gives users access to features like audio controls, video capture, Xbox social settings and even performance metrics. That last part is getting a significant revamp now, in part thanks to a new ‘resources’ widget reminiscent of the Windows Task Manager.

The new resources widget displays which tasks are running and using up the most system resources. Each task gets an ‘impact rating’ of low, medium or high. It lets gamers quickly close things that impact their system performance without having to Alt-Tab or otherwise exit their game.

The resources widget should complement Game Bar’s existing performance widget, which currently shows overall system utilization. Performance can show total CPU, GPU and memory usage, which can help people see how a game impacts their system. Resources, on the other hand, can help maximize performance by revealing resource-hungry background programs. 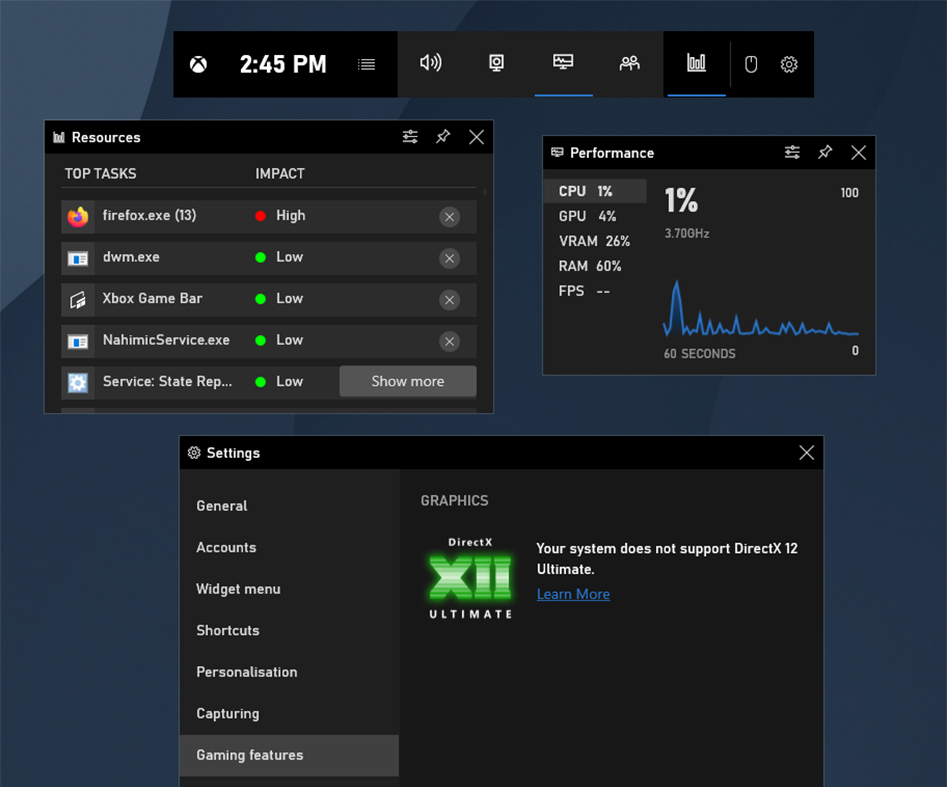 Along with the resources widget, the new Xbox Game Bar can now let gamers know if their PC is ready for DirectX 12 Ultimate. DX12 Ultimate is an upgrade to Microsoft’s existing DX12 graphics API that brings important new features like Ray Tracing 1.1, Variable Rate Shading, mesh shaders and other new technologies.

Perhaps the more interesting part of DX12 Ultimate is that it promises to unify graphics tech for PC gaming and the Xbox Series X. Given Microsoft’s efforts to make Xbox games cross-platform, it doesn’t come as much of a surprise that the company’s DX12 Ultimate will further that goal.

Microsoft’s Xbox Game Bar update is available now with updates rolling out via the Microsoft Store. To check for the update, tap the Windows Key on your keyboard and type ‘store’ > select Microsoft Store > click the down arrow icon in the top-right corner or select ‘Downloads and updates’ from the overflow menu > Get updates. This will check for any new updates available and begin downloading them.

If the Xbox Game Bar isn’t among the updated apps, it’s possible that update hasn’t reached your system yet. It seems the Game Bar update works regardless if you’re on the latest Windows 10 October 2020 Update (version 20H2) or not. If you’re not sure which version you’re on, tap Windows Key + G on your keyboard to open the Game Bar > click Settings > General > look for the Game Bar version number. Version 5.420.10222.0 has the resource widget.