Aside from minor issues that should get fixed in a day one patch, Horizon Zero Dawn executes its PC port well 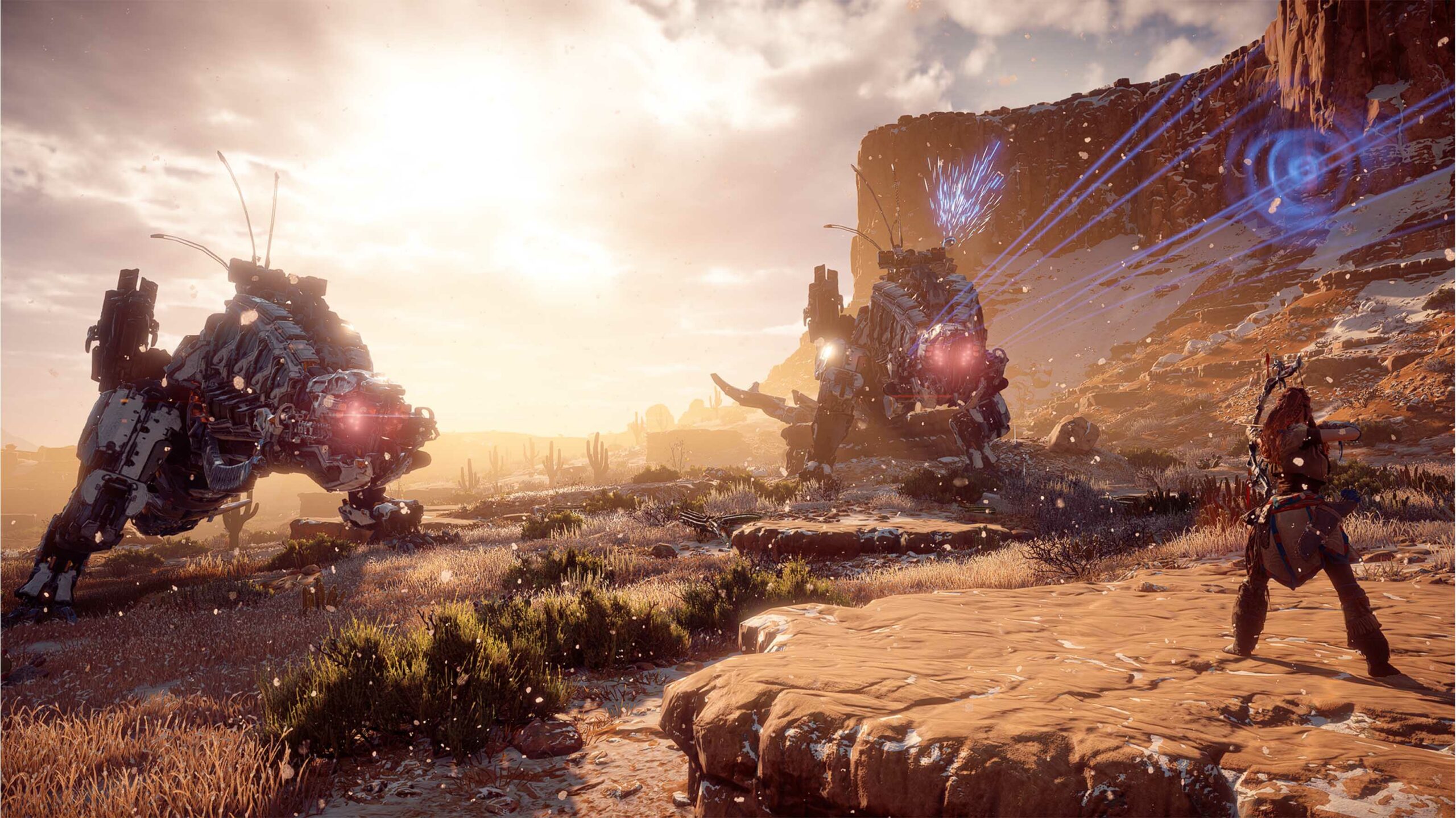 Update 08/11/2020 at 11:08am: Throughout much of the article below, I reference an incoming day one patch that should fix several issues with Horizon Zero Dawn on PC. Having tested that patch now for a few days, I can say that it unfortunately didn’t make a significant difference for me. Most of the issues I mention are still present in the game, and the patch had a negligible effect on performance. Worse, I experienced several game crashes after installing the patch, although after some play time, the game seemed to stabilize.

I’ve seen several reports of other people having issues with Horizon Zero Dawn. Based on those reports, it seems like the game has several underlying technical issues that cause instability on some PC configurations. Some animations, particularly facial animations and grass animations, are locked to 30fps, leading to stutter and stability issues in some areas of the game. I’ve also heard about issues with 4K rendering. Unfortunately I can’t speak to many of those issues since I didn’t encounter them myself.

Ultimately, I think it’s worth investigating Horizon before buying it on PC to see if any of the reported issues happen to people with similar PC configurations to what you have. And if you do have a PS4 and haven’t tried Horizon yet, it may be worth getting the game on console to ensure it will run properly.

Last year, I never imagined I’d get the opportunity to play PlayStation exclusives on PC. But after some rumours in January and an eventual confirmation from Sony in March, PlayStation title Horizon Zero Dawn will arrive for PC on August 7th, 2020.

Horizon Zero Dawn came out back in 2017 with an incredibly unique world that saw players take up the mantle of Aloy, a tribal hunter who kills mechanical beasts. I must admit, although the game looked interesting at launch, I wasn’t sold enough on it to buy a PlayStation 4. However, now that I’ve gotten a chance to try Horizon Zero Dawn on PC, I would have played it if I had a PS4 back in 2017.

Horizon features a colourful and unique world along with engaging gameplay. In some ways, it reminded me of The Witcher 3 in that one of the core loops involved tracking and hunting monsters. Horizon does a great job in constructing an environment for players to exercise tracking and sneaking skills while approaching herds of machines.

While I could go on at length about the game, there’s unfortunately little I can add that hasn’t already been said about Horizon. The game has been around for three years now, and if you’re looking for in-depth reviews, guides or other information, you won’t find that here.

Instead, I want to focus on the actual PC port, how it differs from the original PS4 version and whether it’s worth buying. 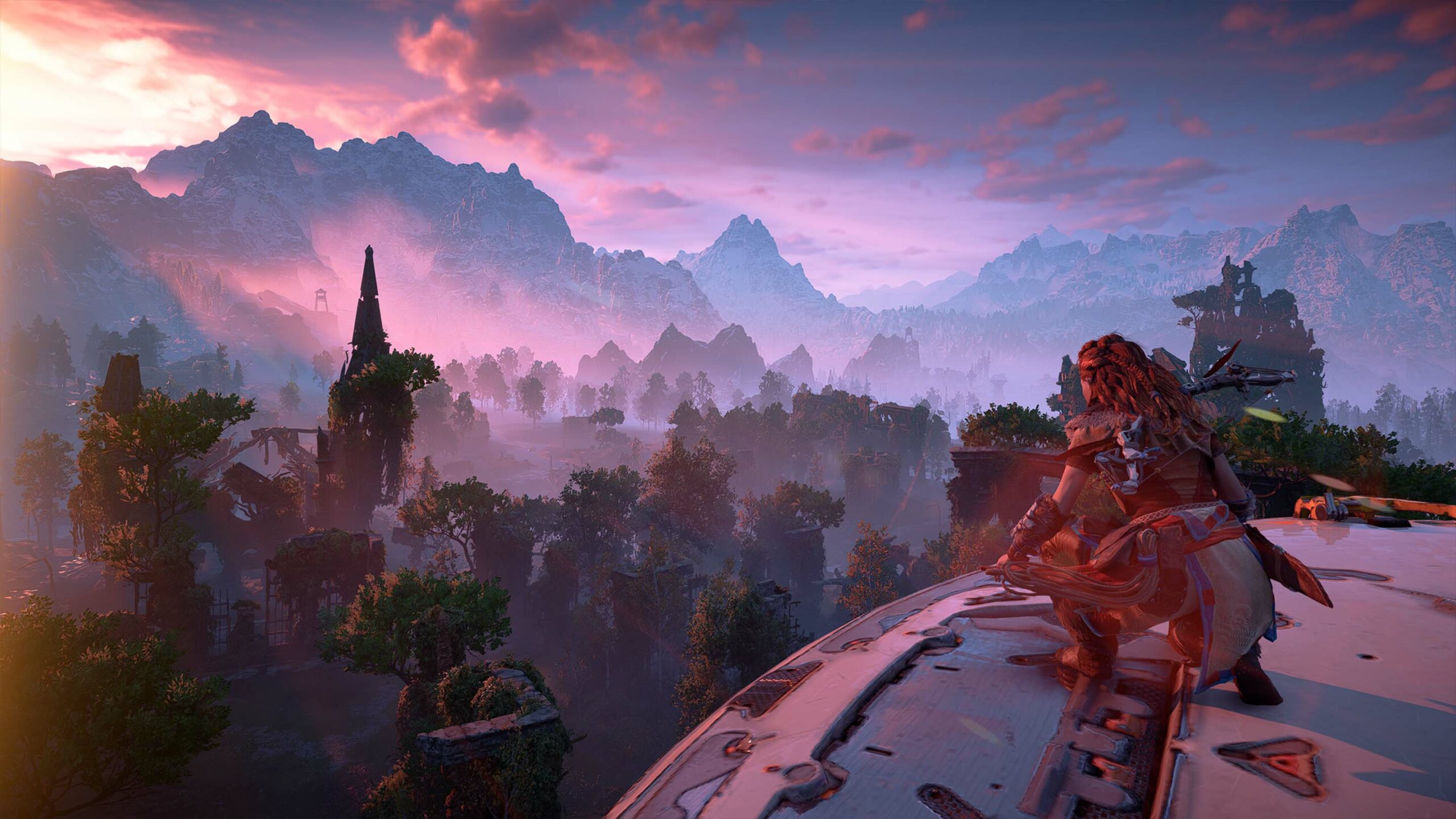 To start, developer Guerrilla Games partnered with external developer Virtuos to bring Horizon to PC. Guerrilla says it worked to deliver the same experience to PC players as what Horizon offered on PS4. Although I didn’t play the original PlayStation 4 version, it does appear to be true.

The game itself is not drastically different. Players still take on the role of Aloy and play through her story, complete sidequests, hunt and explore. However, some of the surrounding technology has changed slightly.

For example, Guerrilla and Virtuos brought some PC ‘creature comforts,’ if you will, to Horizon‘s world. That includes surprisingly good mouse and keyboard controls, ultra-wide monitor support and other smaller tweaks.

Unfortunately, Horizon on PC brings a few issues, too, especially in the performance and graphics areas. To be fair, there will be a day one patch for the game that will supposedly fix these issues. It wasn’t available at the time of writing, but I’ll update the story after the official launch with details on the effect of the patch. Thankfully, none of the issues break the game, and, in the big picture, aren’t significant problems.

Feels made for WASD 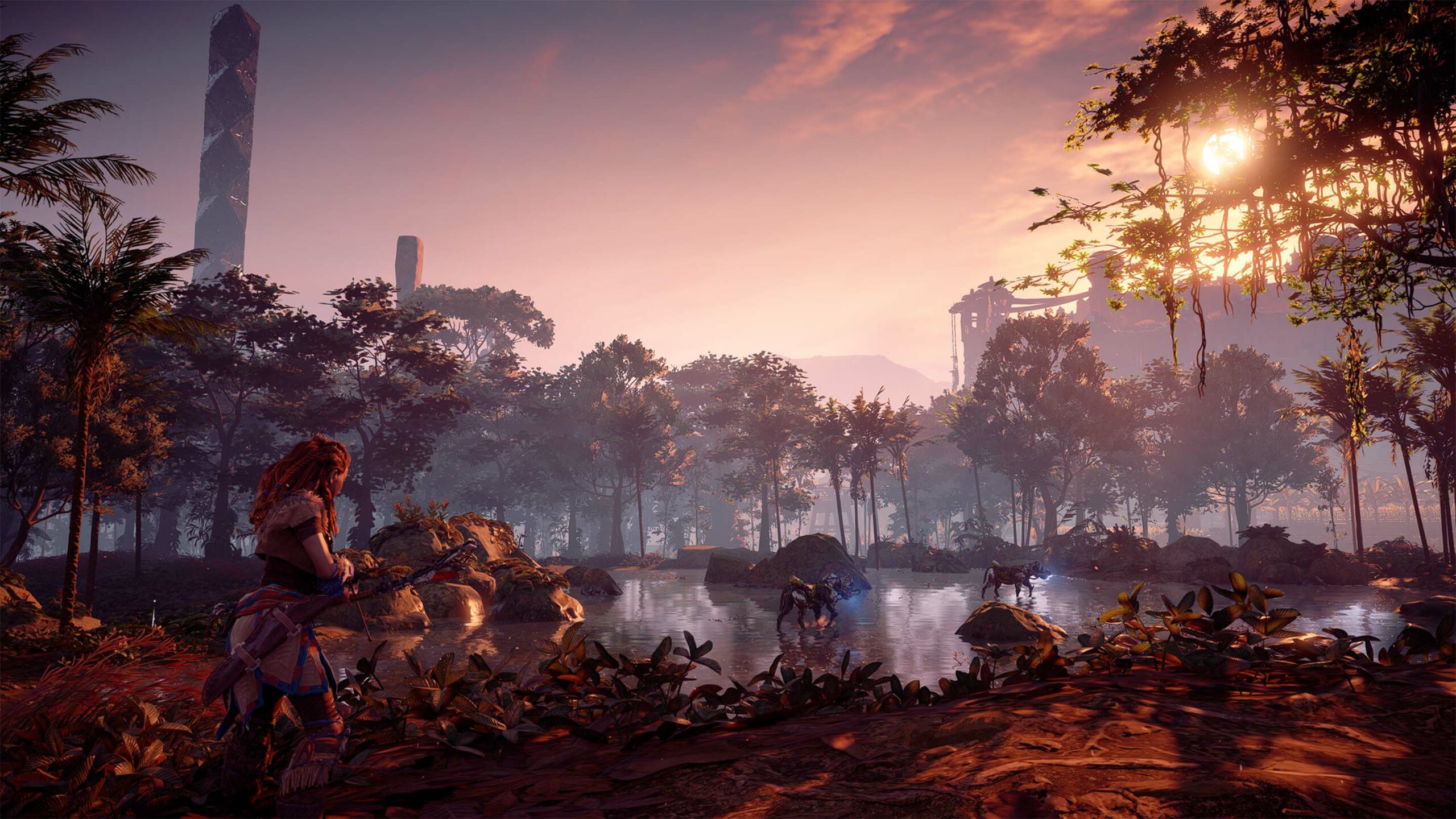 I’ve noticed with PC ports I’ve tried in the past that the translation to keyboard and mouse causes issues. As far as buttons go, it’s usually not a big deal since it’s a matter of re-mapping them, but joystick-to-mouse conversion can definitely cause issues.

Horizon on PC does not suffer from any of these problems, thankfully. Out of the box, the control scheme made sense, and the mouse input worked exactly as expected. For the first time in a long while, I played a game without adjusting any of the mouse settings at all — it was perfect from the start.

I’d even go as far as to say that the game feels explicitly made for keyboard and mouse, at least most of the time. There were some moments where the movement felt just a little off, but by and large everything was fluid and responsive to my inputs. This was especially true in intense combat situations where the game just naturally flowed.

Another indicator of Guerrilla and Virtuos’ attention to detail is in the graphics. For one, Horizon supports ultra-wide displays, which is a huge plus considering the original PS4 game only needed to support 16:9 aspect ratios. Also, it was great for me since I game on an ultrawide display.

However, the developers went above and beyond just supporting ultrawide in-game. Cutscenes, which are all rendered at 16:9 sport fun, stylized letterboxing not seen on other games. Even made-for-PC titles I’ve played in the past just drop in black letterboxes for the 16:9 cutscenes. On the other hand, Horizon includes a subtle, blurred letterbox that matches the colours of the cutscene. At first, it looked out of place, but after playing the game for a while, I came to enjoy the stylized letterboxing much more.

One small issue I did have with ultrawide is that whenever I launched the game, it changed the aspect ratio back to 16:9 while still trying to render the game at 21:9, making for a weird, squished image. It was an easy enough fix, though — Alt+Tab out of and back into the game made it normal.

All the settings you want to tweak 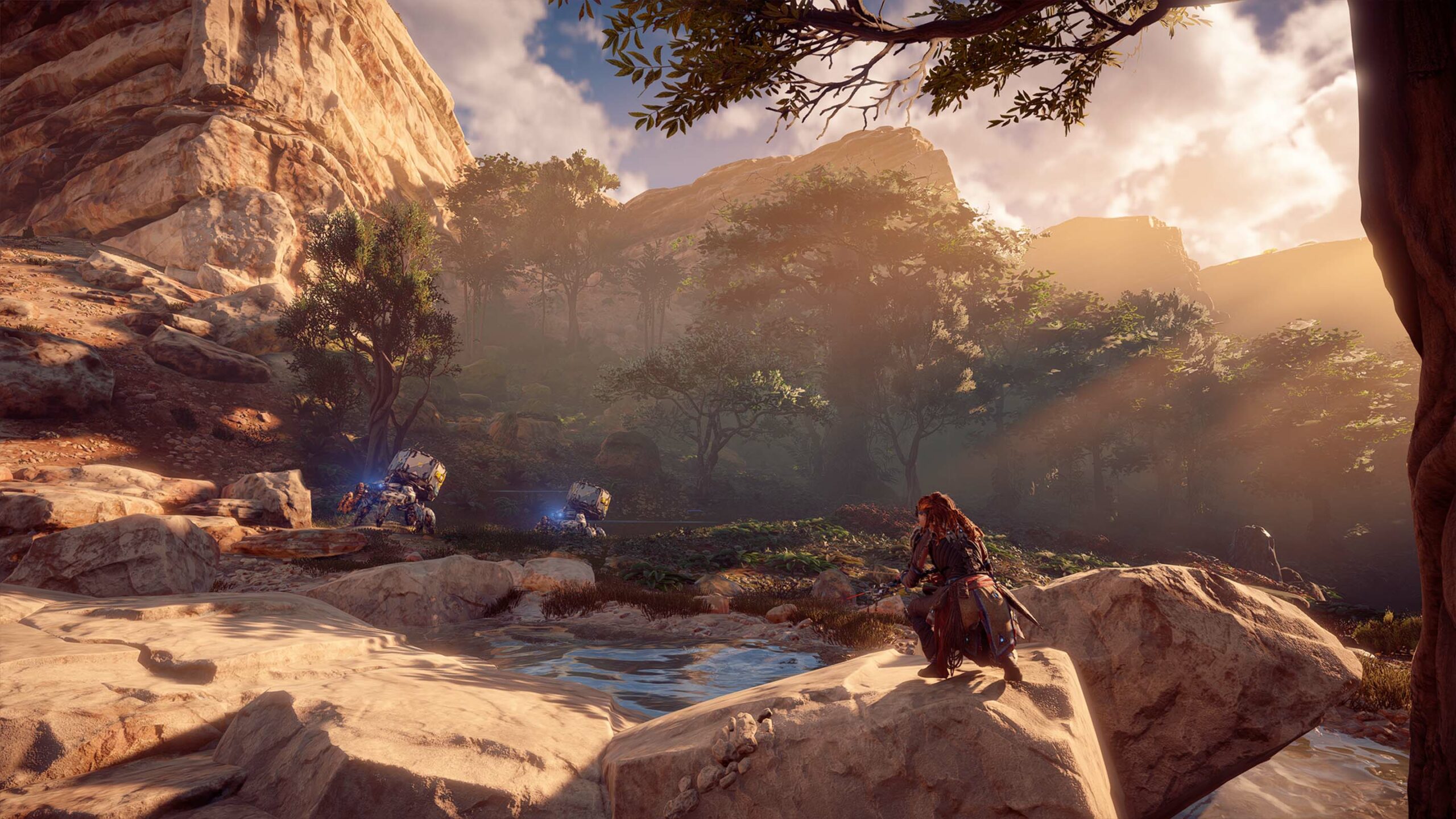 Guerrilla and Virtuos added a bunch of customization options to Horizon on PC as well. That means you can play with unlocked framerates, adjustable field-of-view (FOV) and more.

This part I also found quite impressive with Horizon Zero Dawn. Call me a nerd, but one of the things I enjoy most about PC gaming is digging through the settings and messing around with options to get the best balance of visual fidelity and performance.

Horizon on PC gives you all the settings to mess around with, including various sliders for adjusting the environment quality, textures and more.

There’s also a handy ‘auto-detect’ feature that can scan your hardware and input the optimal settings. Unfortunately for me, the auto-detect crashed when I ran it and then auto-set everything to low, so I went through and applied the settings how I saw fit (which I probably would have done anyway).

Guerrilla and Virtuos added several other improvements, including changes to the lighting and reflection system as well as dynamic foliage that reacts to the player. These looked great, although I did notice in some areas the volumetric lighting exhibited weird graphical glitches. This was mostly isolated to the early game. Further, the day one patch will likely fix that particular problem.

That patch, along with an upcoming driver update, should fix some optimization issues for people with AMD GPUs. For me, I found the game performed very well on AMD except in some high-density areas such as cities with lots of NPCs. Hopefully optimization and driver patches tighten up those issues, but by-and-large, they weren’t enough to ruin gameplay.

Worth buying on PC? 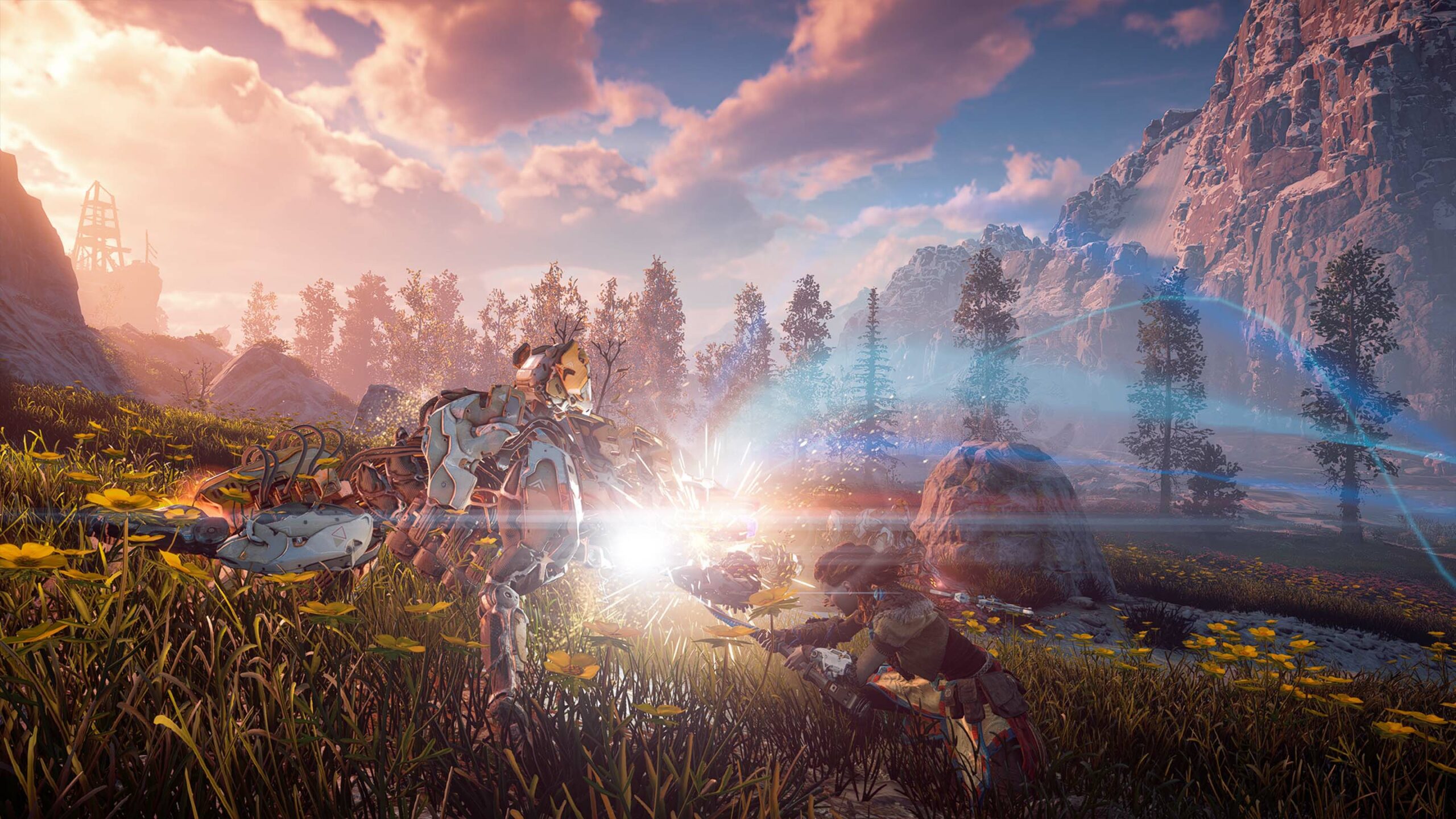 Horizon Zero Dawn on PC is an excellent port. It gets almost everything right and — with the day one patch — will hopefully get better in time. As it stands, none of the issues I encountered stopped me from enjoying the game.

Still, $60 CAD is a steep ask for a three-year-old game, even with the included DLC.

It comes down to how much you want to play Horizon Zero Dawn, and whether you have a PC or PlayStation. If you’ve got a PS4, chances are you already own Horizon, and if you don’t, you can probably pick up a copy on the cheap, either through a sale or by purchasing a second-hand copy. You aren’t missing out on anything from the PC version.

However, if you’re hardcore in the PC camp and don’t own a console, I’d say it is worth playing if you are interested in it. The game looks great without being the most visually stunning PC game, performs well and doesn’t feel like a console port. All these elements contribute to a great experience. If Horizon is the type of game you’d enjoy, it’s certainly worth playing.

Horizon Zero Dawn will be available on PC starting August 7th for $59.99.