It turns the iPad Pro into a laptop 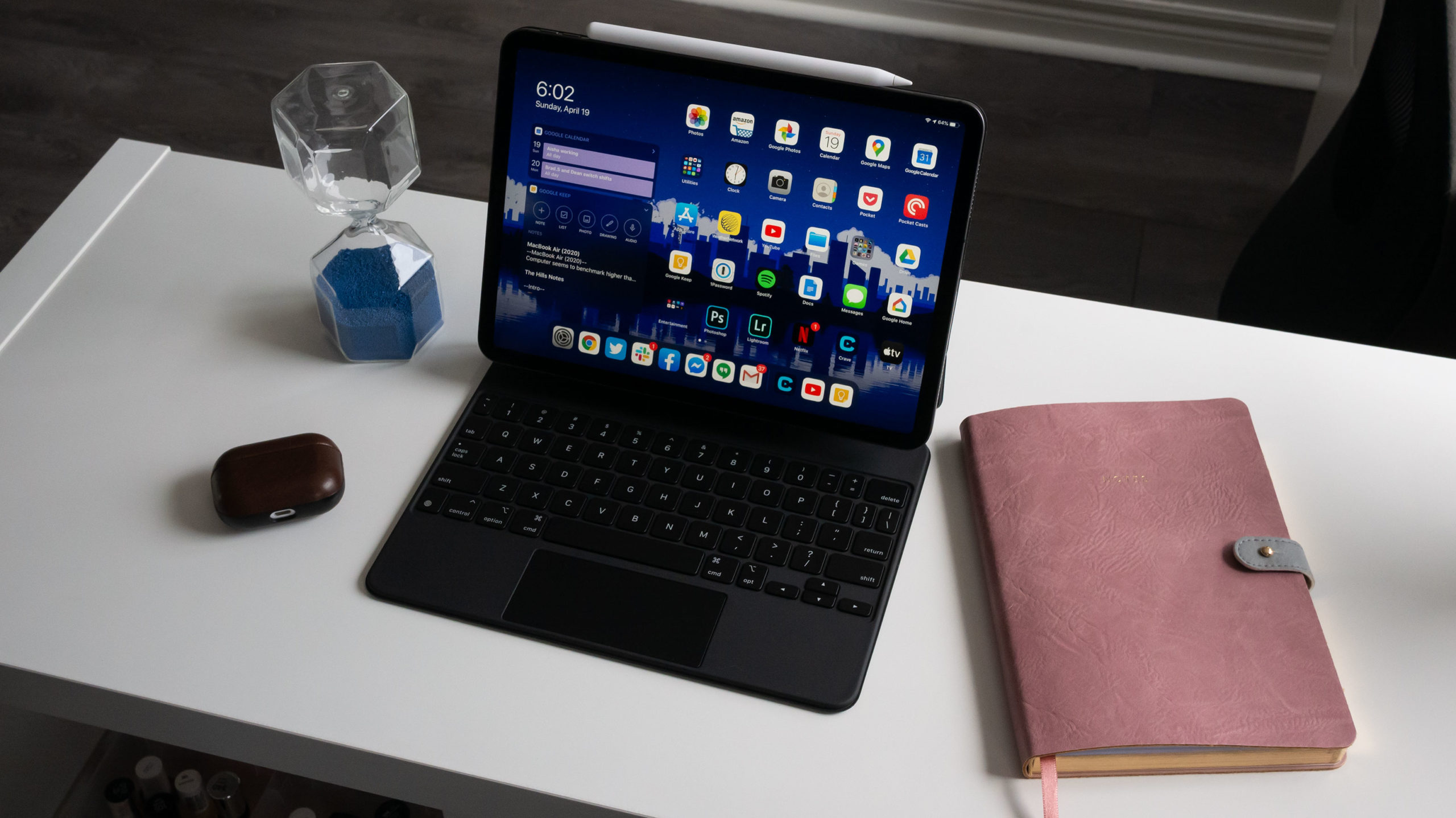 Apple’s new iPad Pro ‘Magic keyboard’ is far better than I expected it would be.

First off, the keys feature the perfect amount of travel and feel nearly identical to the 16-inch MacBook Pro’s and MacBook Air (2020)’s excellent ‘Smart Keyboard.’ The Magic Keyboard is also surprisingly solid even when using it on my lap, and most importantly, it allows you to actually adjust the iPad Pro’s angle to more than two positions, unlike the tablet’s not very good Smart Keyboard. 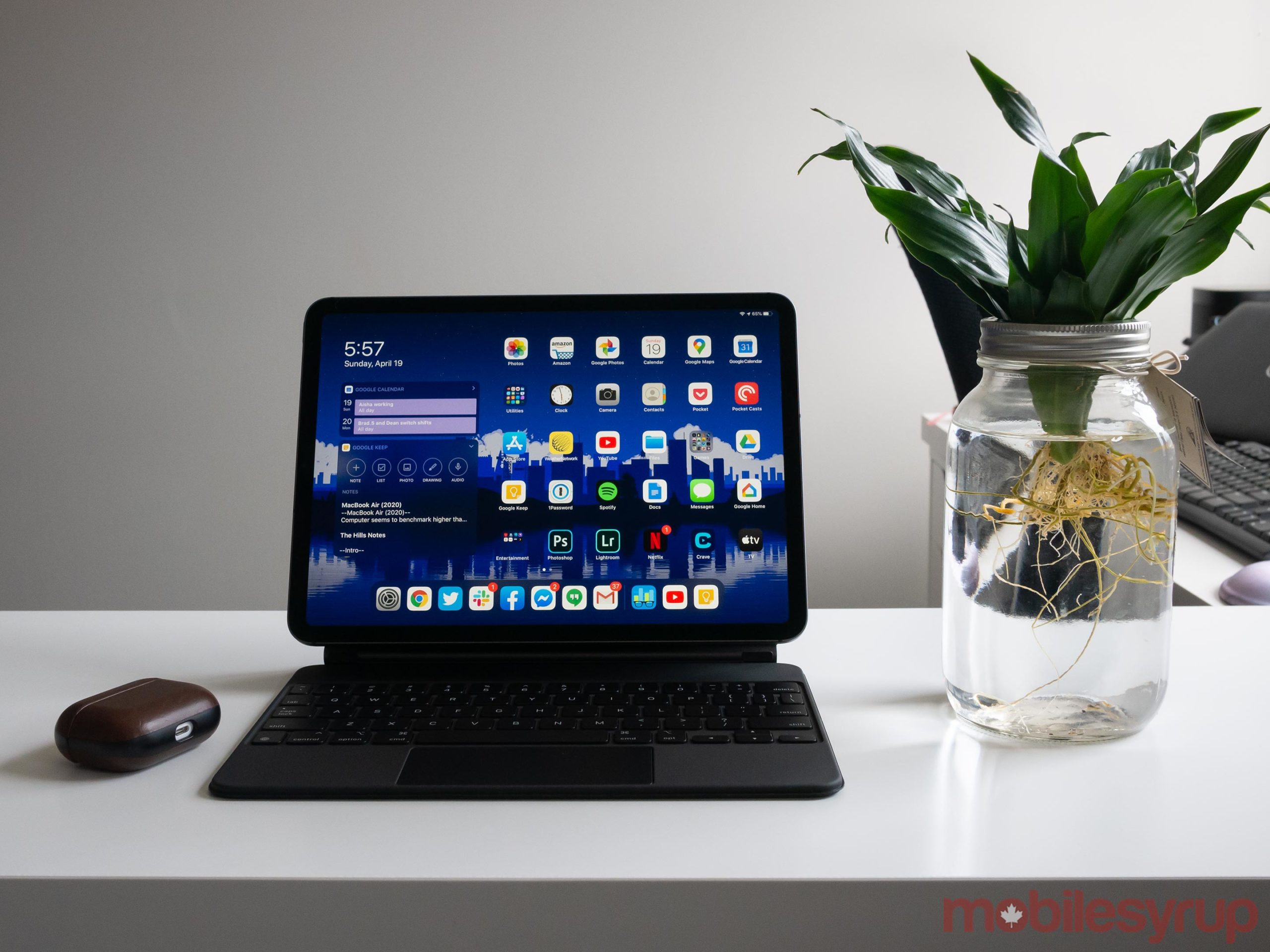 But it’s not totally perfect.

Beyond the expensive $399 CAD and $449 respective price tags for the 11-inch and 12.9-inch version of the keyboard, its clicky trackpad at times feels too small. The keyboard also adds a surprising amount of weight to the already heavy iPad Pro, and the 11-inch version feels slightly too cramped for my taste. 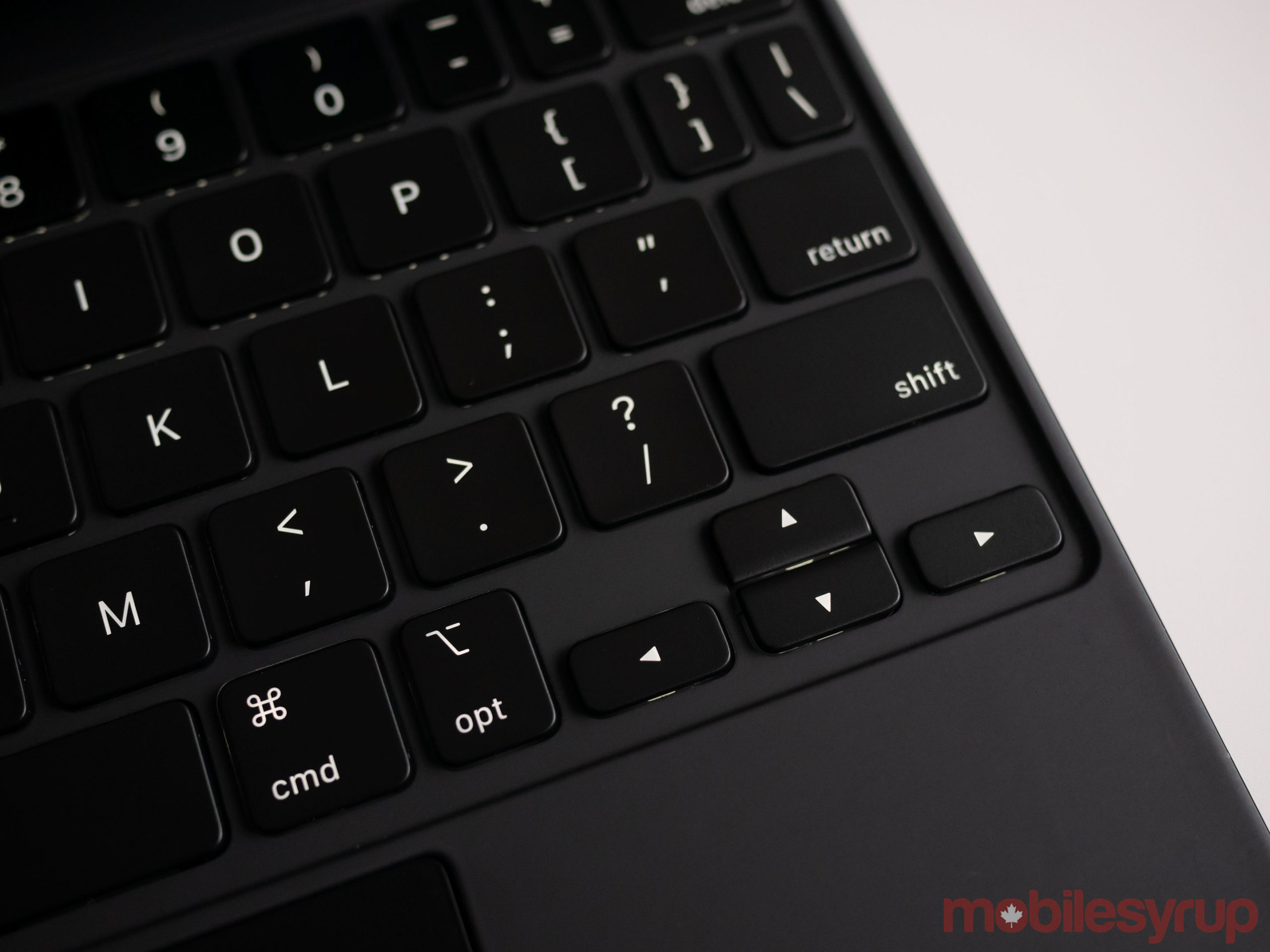 Anyone with smaller hands might not find the 11-inch Magic Keyboard small, but I definitely felt it was a little too tiny after using it for several hours to write this story and edit these photos.

With that in mind though, the 11-inch keyboard feels great if you’re using it for only a couple hours at a time. To be fair, I haven’t tried the 12.9-inch Magic Keyboard. My guess is that given it’s the same size as a standard 13-inch laptop’s keyboard, it would feel very similar to using a laptop. 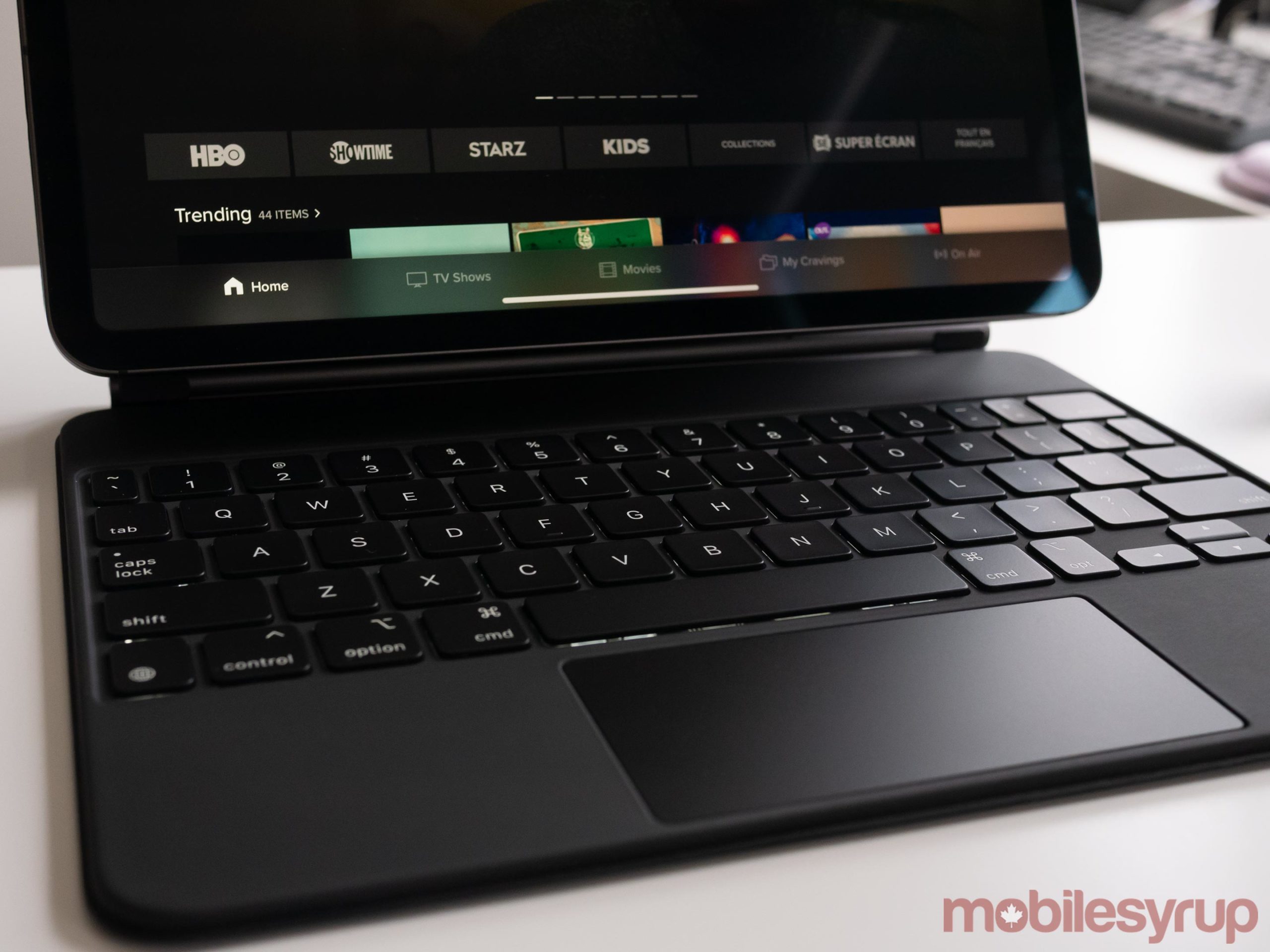 Beyond the Magic Keyboard’s excellent backlit keys (the backlight can be turned down in the ‘Settings’ menu), the USB-C port located on the left side is a welcome addition to the iPad Pro. It allows you to have another accessory plugged into the tablet while also charging it, and for many could mean carrying one less dongle around.

There’s also no function, backlight or volume keys built directly into the keyboard, which is disappointing but not a major issue.

The Magic Keyboard feels relatively stable when typing with it on your lap but still wobbles around a bit depending on the angle it’s sitting on. It does bounce around far less than Microsoft’s Surface TypeCover, however, even though the weighty iPad Pro is actually floating above the keyboard.

It would have been great if there was a way to angle the actual keyboard slightly, similar to the TypeCover. The Magic Keyboard works best on a completely flat surface, but being able to slope the keys upwards would make it feel slightly more ergonomic. 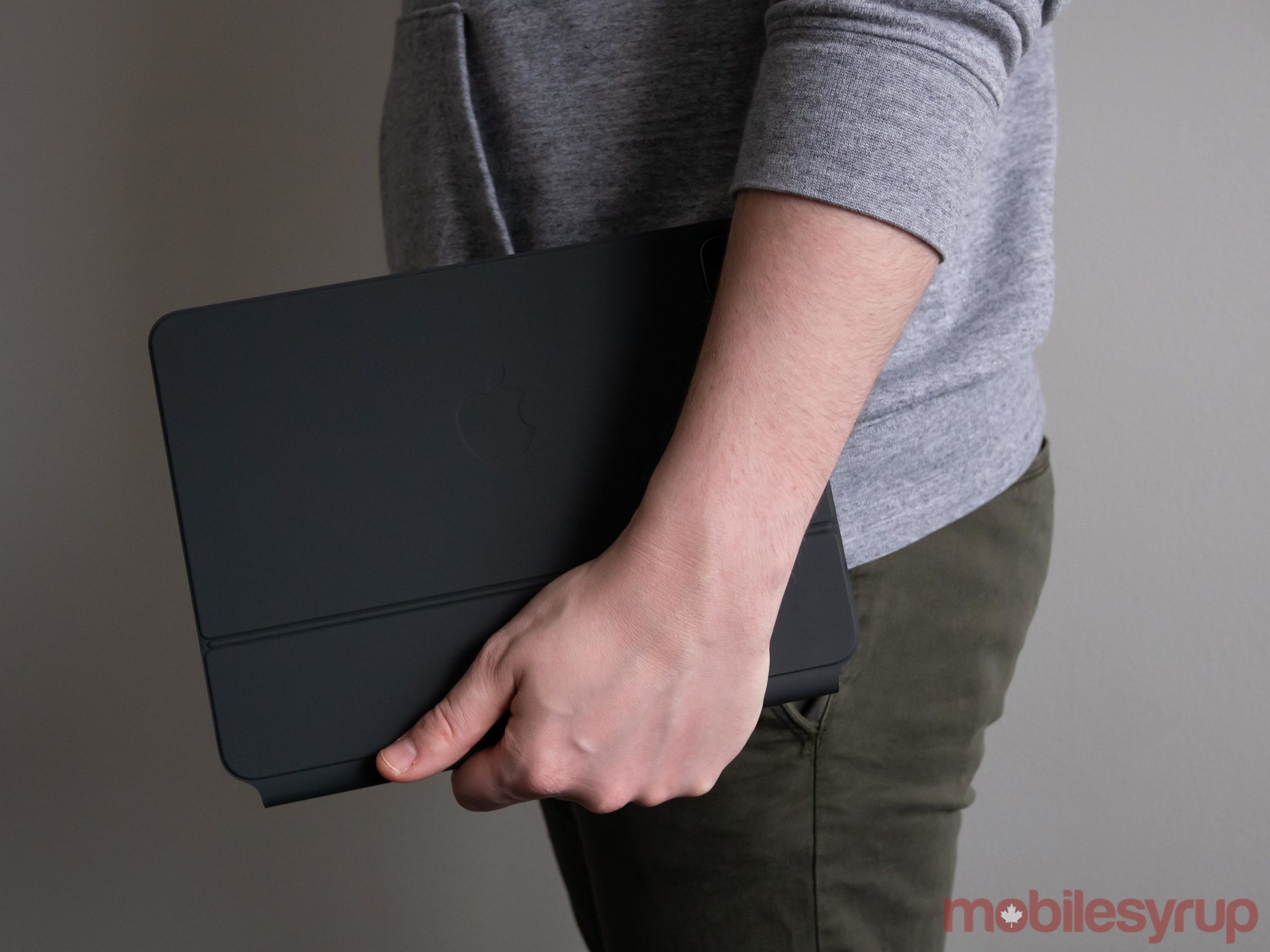 Speaking of the way the iPad Pro sits above the keyboard, it really does look as cool as it sounds and, surprisingly, somehow doesn’t make it feel back-weighted — this is likely why the angle the iPad Pro can be moved is still somewhat limited. It would be great if Apple found a way around this and allowed the keyboard to tilt slightly farther back, but this isn’t a huge issue.

Regarding connecting to the iPad Pro, the Magic Keyboard smoothly and quickly snaps to the rear of the tablet magnetically via its ‘Smart Connector.’

While iPadOS 13.4’s mouse and keyboard support was a welcome addition to Apple’s tablet operating system, a disconnect was still there. Most people are likely using the iPad Pro on the go and probably aren’t carrying around a keyboard and mouse or trackpad. The Magic Keyboard solves this issue. 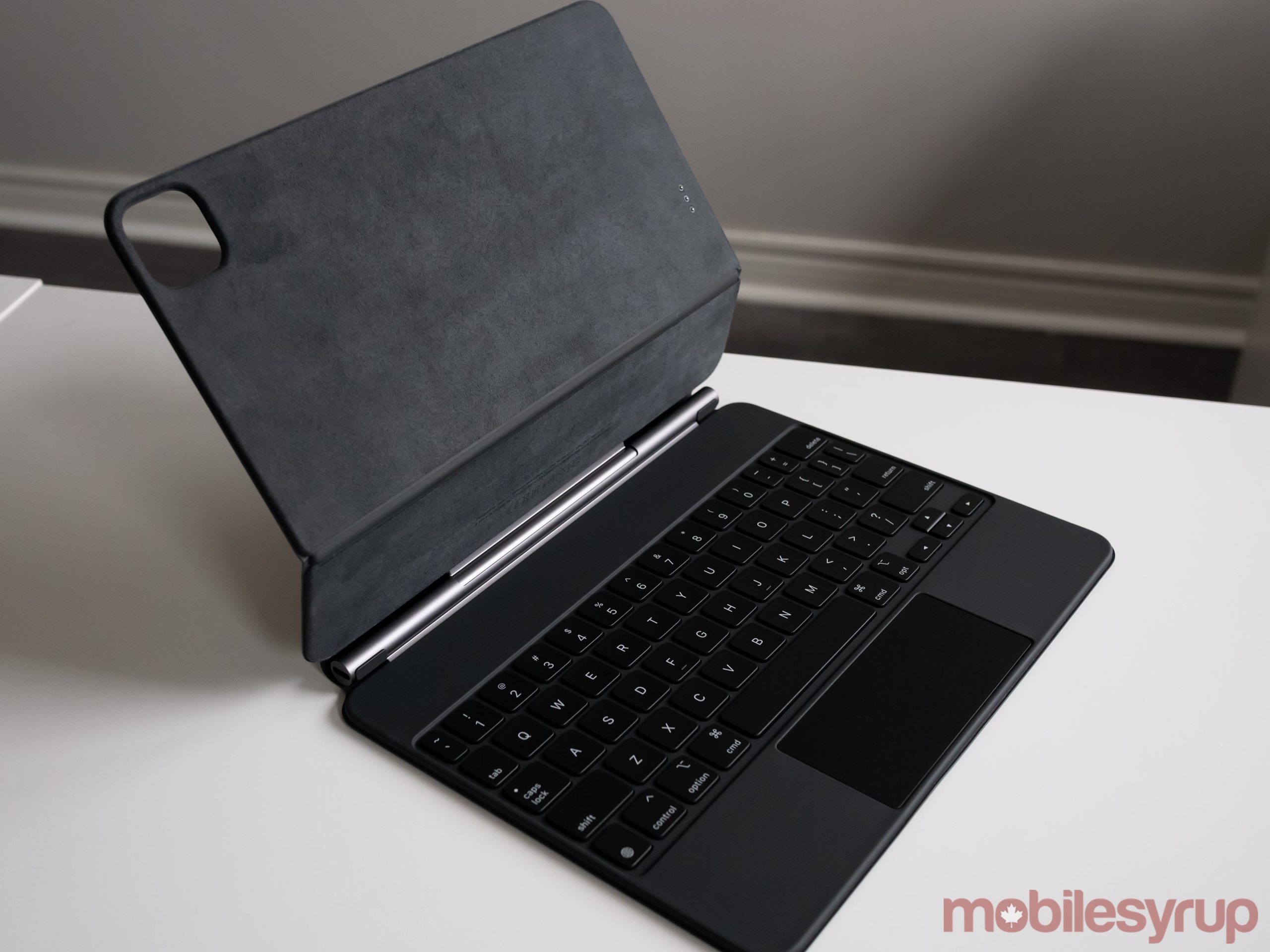 During the roughly 15 hours I’ve used the Magic Keyboard so far, I find myself quickly switching between typing, using the fluid trackpad and navigating with the touchscreen. In fact, for whatever reason, it still feels comfortable to swipe on the actual tablet to scroll up and down, rather than the two-finger swipe on the Magic Keyboard’s trackpad MacBook users will be familiar with.

The fact that the iPad Pro floats above the keyboard also means that it’s still easy to grab and hold if you want to interact with the touch screen. 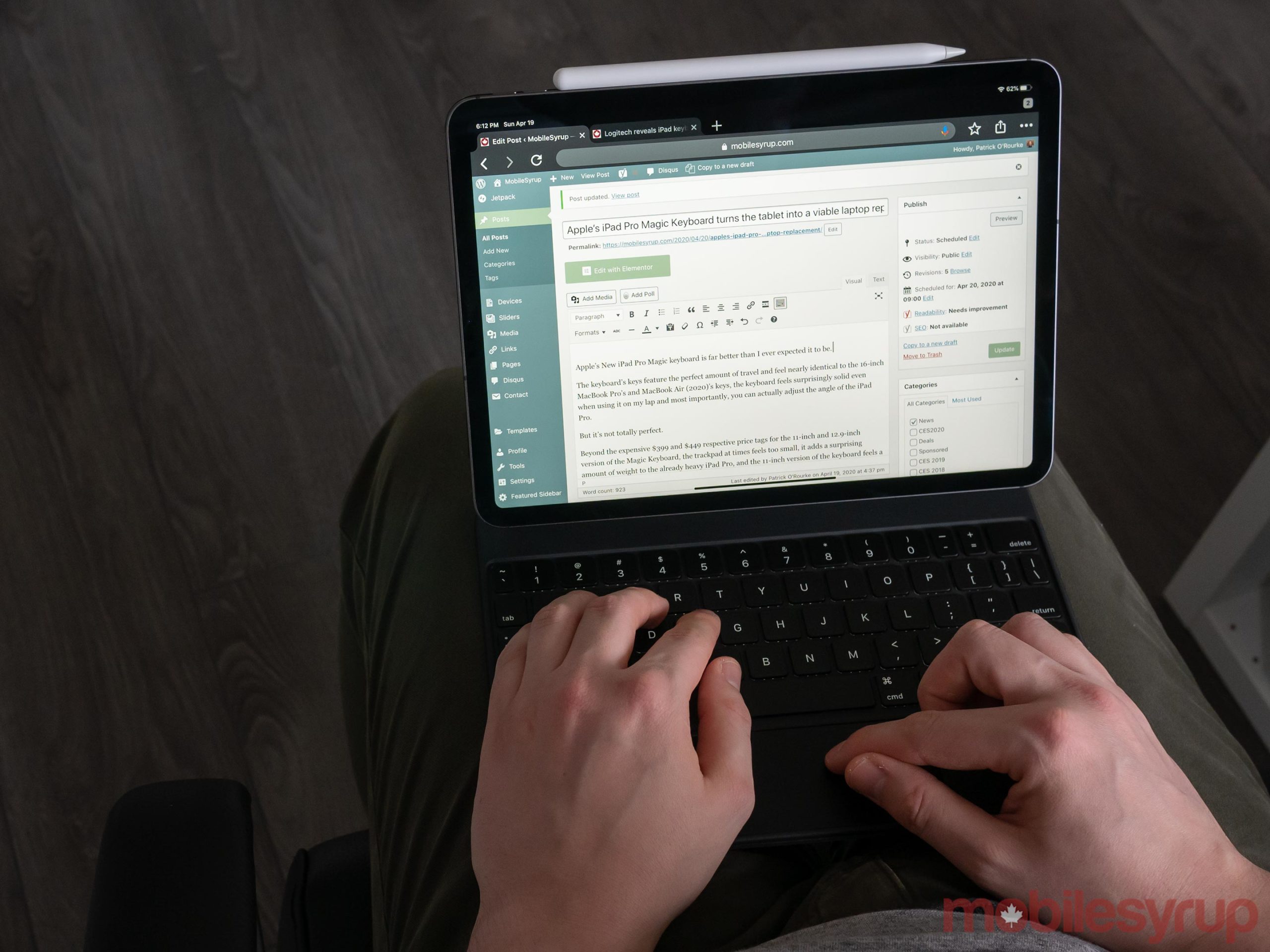 It’s worth noting that mouse and trackpad support is available on pretty much every recent iPad model and isn’t exclusive to the iPad Pro. Logitech’s ‘Combo Touch Keyboard with Trackpad’ is designed for the seventh-generation iPad (the 10.2-inch model) and the third-generation iPad Air (the 10.2-inch model), while Apple’s new Smart Keyboard works with the new 11-inch and 12.9-inch iPad Pro and the 2018 version of the tablet.

Logitech’s keyboard isn’t yet available in Canada but will release here eventually. 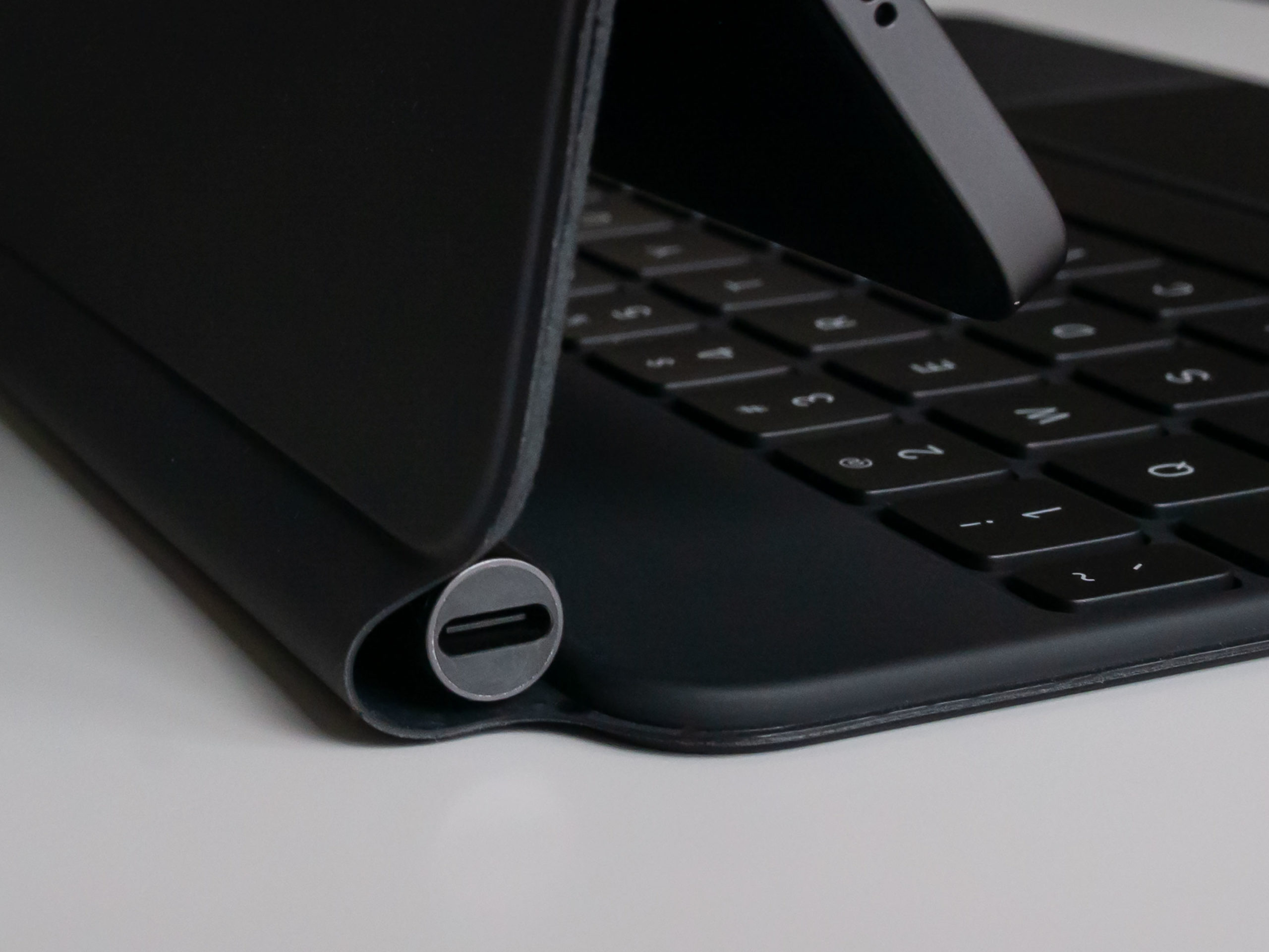 It’s unclear how many third-party keyboards that feature a trackpad will eventually be released for the iPad Pro. As it stands right now, the only other keyboard that includes a trackpad is Brydge’s new $199 USD (about $278 CAD) Pro+ keyboard. The keyboard isn’t yet officially available but is listed as shipping in “mid-April 2020”.

This means that as of right now, the Magic Keyboard is the only iPad Pro keyboard with a trackpad currently available, though this doesn’t make its expensive price tag any easier to justify. To put the cost in perspective, the lowest-end iPad Pro (2020) is priced at $1,049 and the Magic Keyboard costs $399, coming to a total of $1,448.

This is well above the MacBook Air (2020)’s starting $1,299 price tag, though I do think most people should be purchasing the slightly more expensive Intel i5 version of the Air. 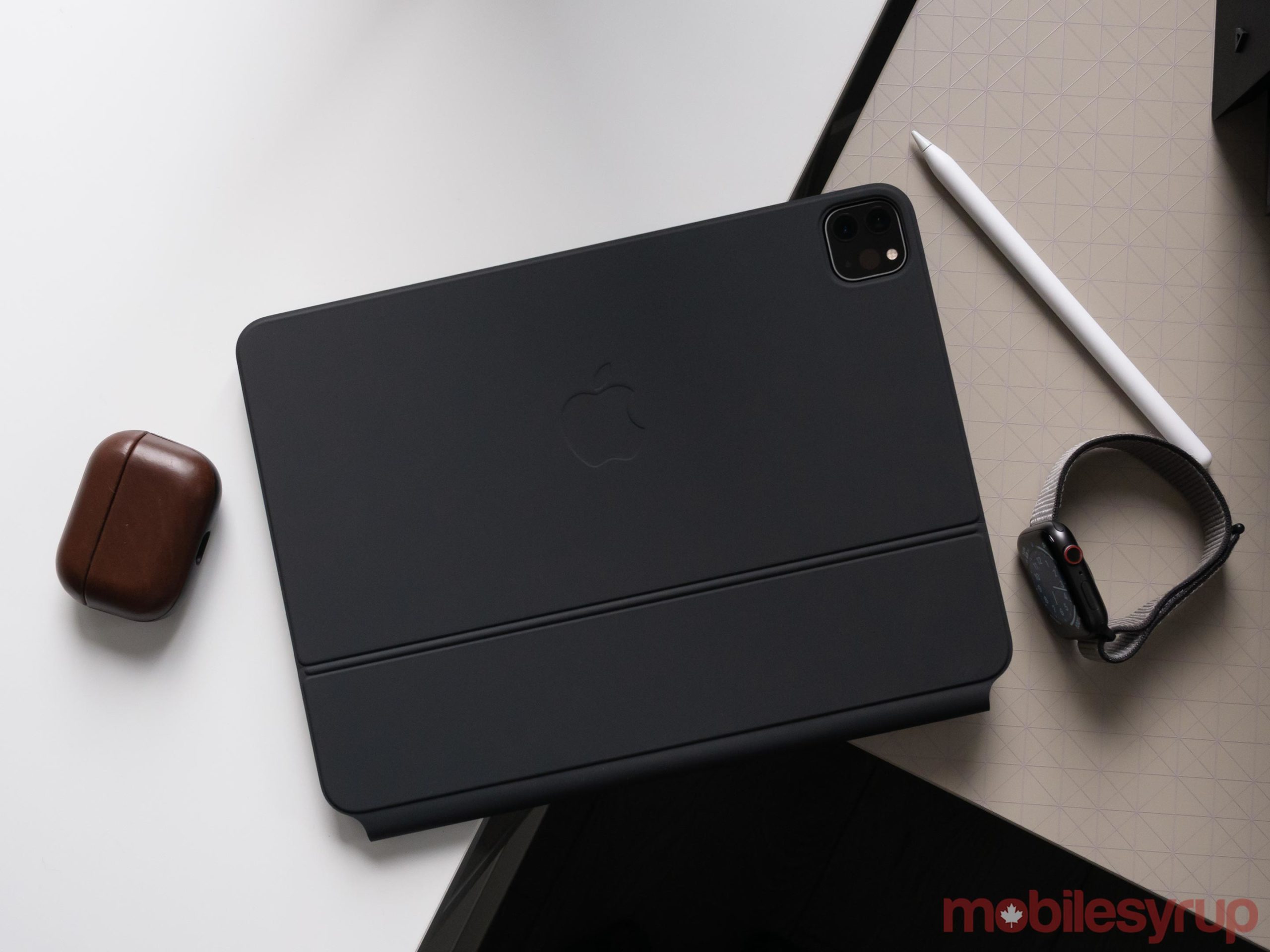 The question surrounding the iPad Pro coupled with the Magic Keyboard is if the tablet is really capable of doing everything you need in order to replace your laptop. Despite the advancements Apple made with the launch of iPadOS and most recently, iPadOS 13.4, most people will still need to change their workflow in some way to suit the limitations of Apple’s tablet operating system. If that’s not something you’re interested in doing, you’re better off with a MacBook Air or a comparable Windows 10 laptop.

Apps also still haven’t caught up with the new trackpad and mouse input, with Adobe’s suite being the most notable example (I talk about this at length in my iPad Pro (2020) review). This won’t be an issue forever, and I expect developers to update their apps with improved trackpad and mouse support slowly. Still, it’s something to keep in mind if you’re considering dropping $399 on the new Magic Keyboard. 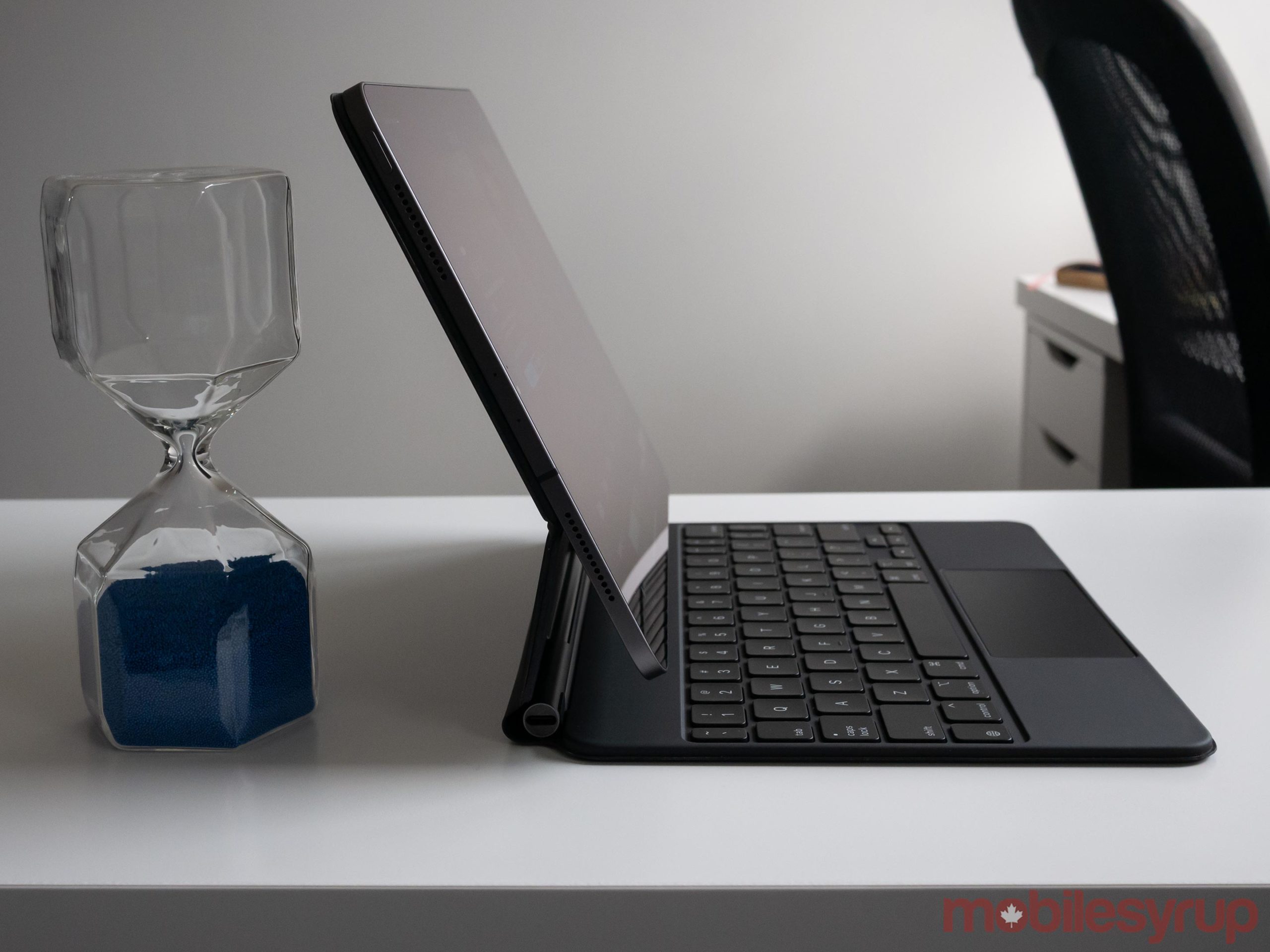 The new Magic Keyboard is available to order now from Apple’s website for $399 for the 11-inch version and $449 for the 12.9-inch iteration. The company says that keyboards should start arriving at customers’ homes later this week.