Just like I have with almost every major smartphone release over the last few years, I’m taking a quick look at Spigen’s line of smartphone cases. This time around it’s their new selection of Samsung Galaxy S10+, S10 and S10e cases

The cases are very similar to the accessory maker’s past enclosures, only with subtle differences, including minor design and build changes. 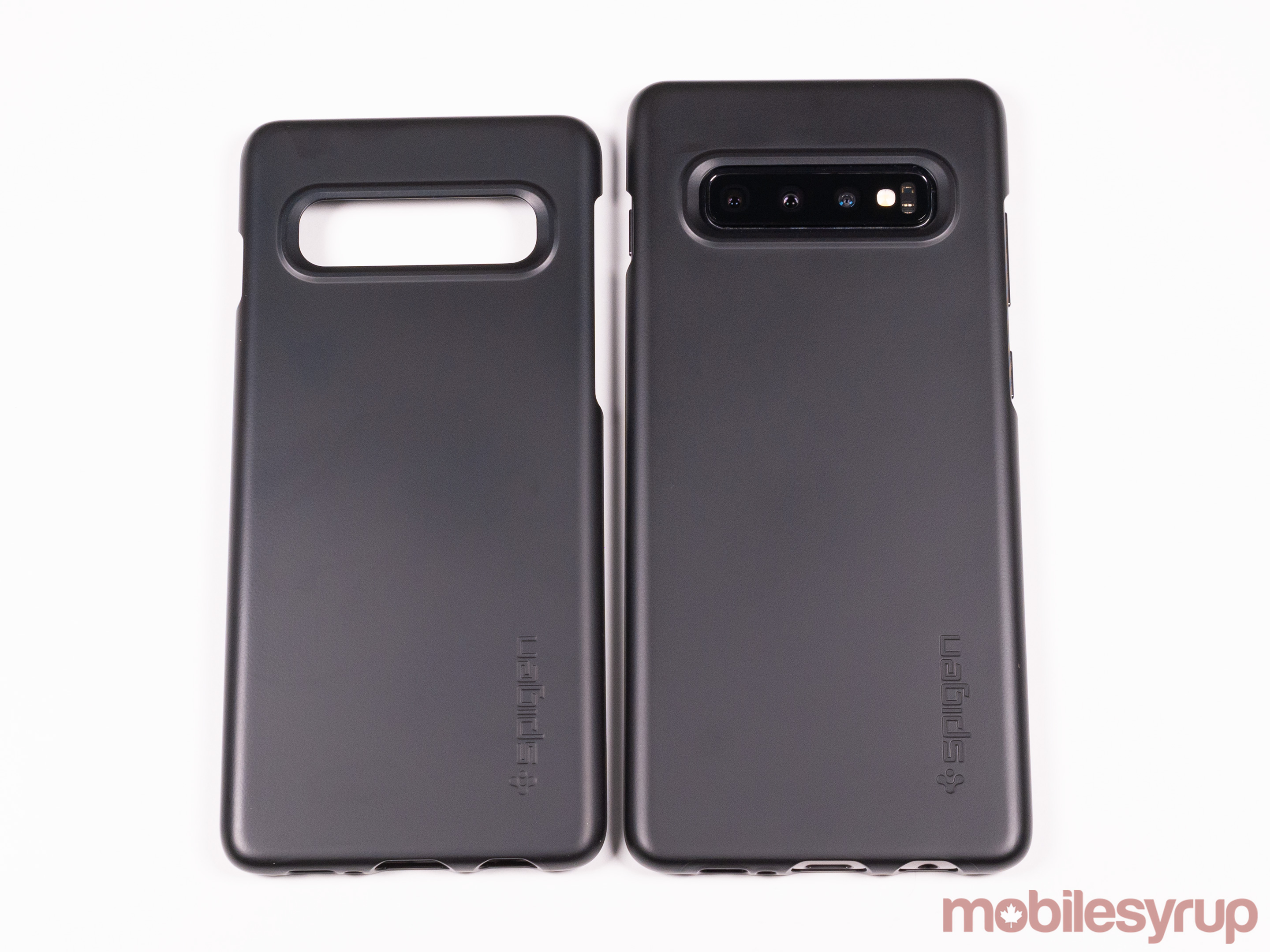 I’ve always been a fan of Spigen’s Thin Fit frame because, as its name suggests, it’s incredibly thin. It offers additional protection to the slippery S10, S10+ or S10e, all without adding noticeable bulk to the sleek- smartphone.

Similar to all of Spigen’s cases, the Thin Fit is even compatible with the S10’s wireless charging functionality. The case’s precise cutouts also give easy access to all of the phone’s ports. Also, just to be clear, the above image isn’t out of focus; Spigen’s Thin Fit case just features a matte black back. 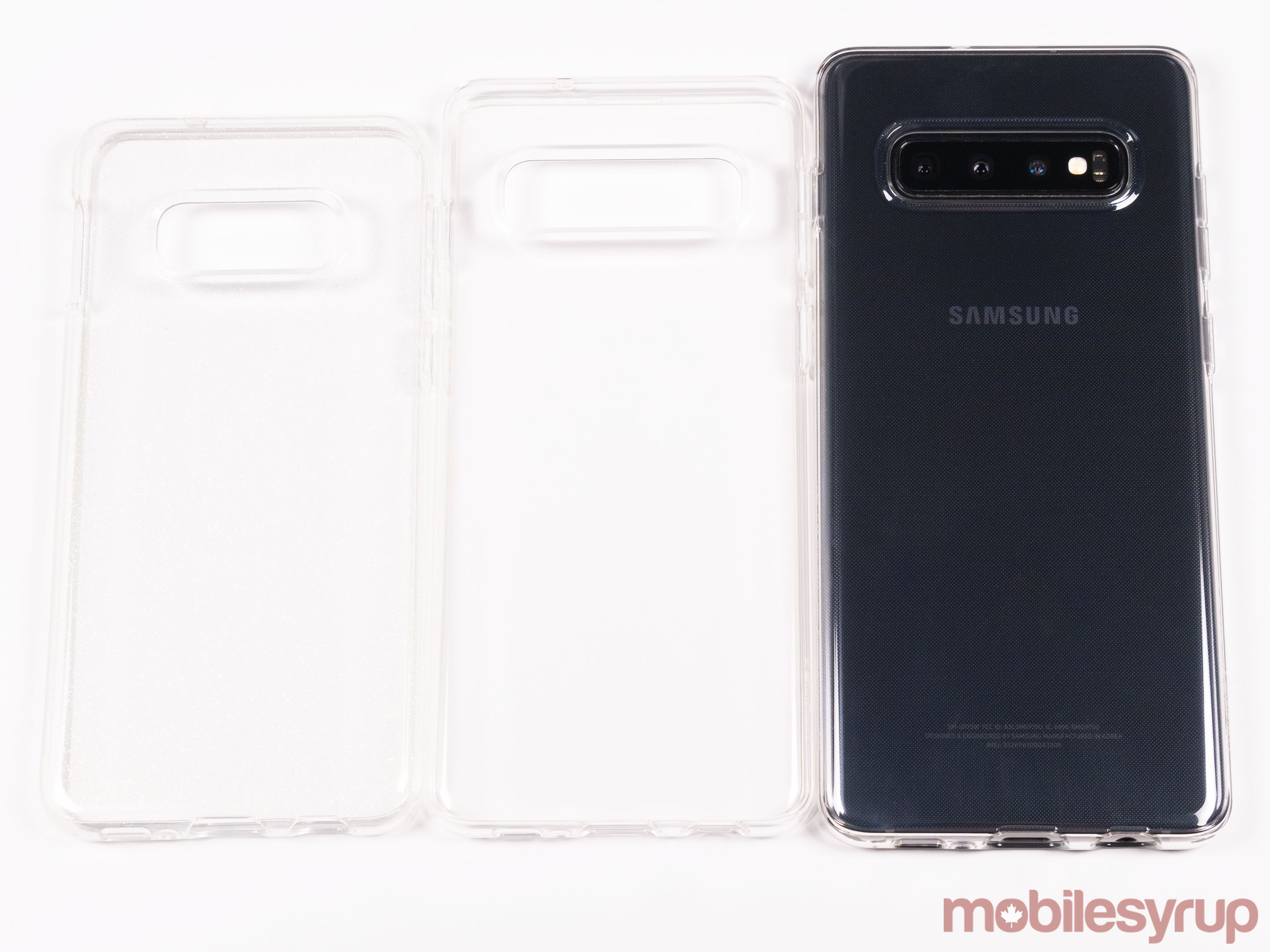 If you’re looking to show off the design of the S10, 10+ or S10e, then one of Spigen’s Liquid Crystal cases could be what you’re looking for. The case protects the rear of the phone, while still exposing the beautiful and vibrant shades the S10 comes in; ‘Prism Black,’ ‘ Prism White,’ or ‘Prism Blue.’

The case is also more scratch resistant when compared to past Liquid Crystal enclosures designed for other smartphones. If you’re looking to add a little more sparkle to the phone, which isn’t something I’m exactly after, Spigen also sells a Liquid Crystal Glitter version of case see-through case. 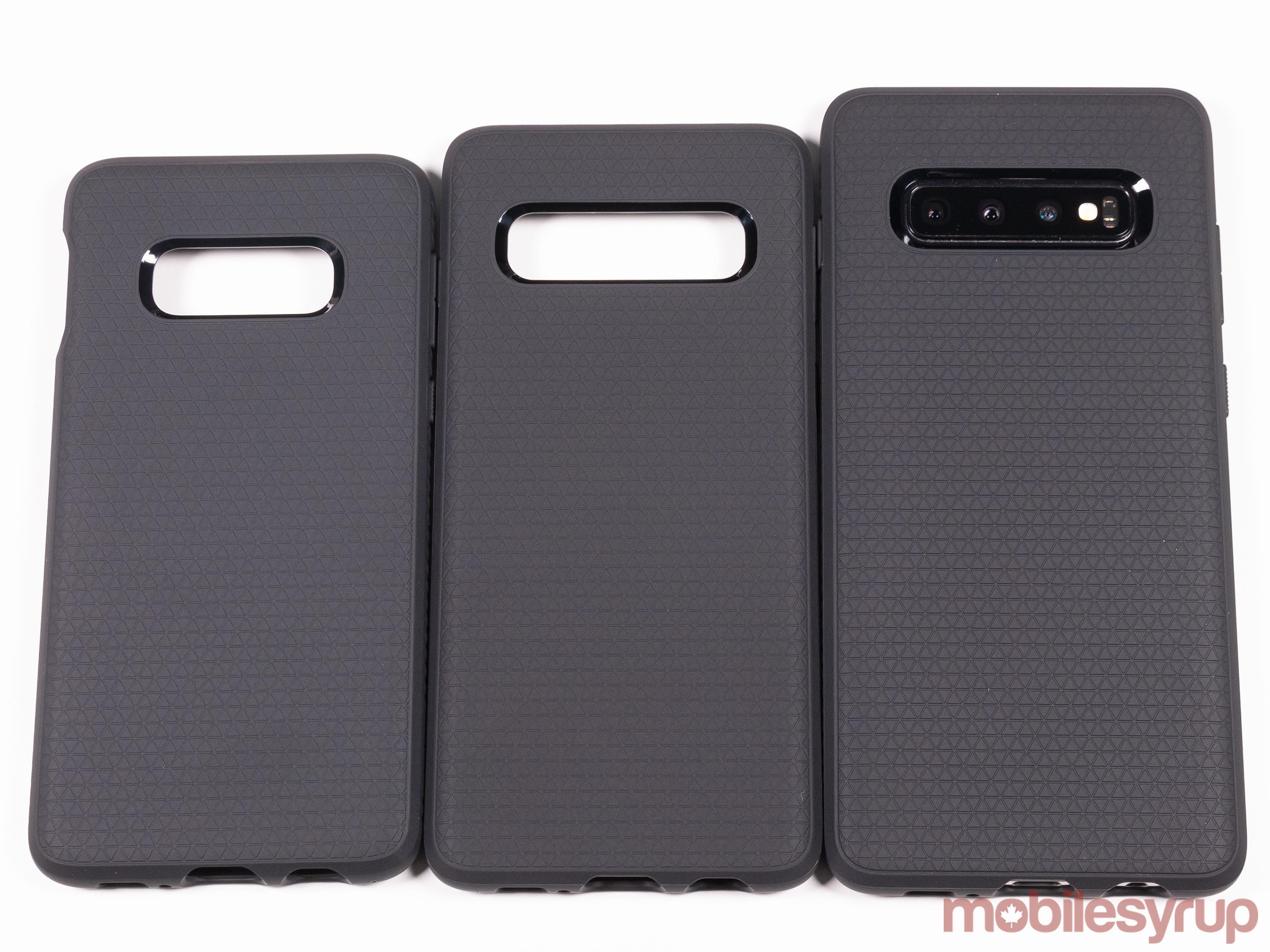 Spigen’s Liquid Air cases typically don’t appeal to me, but this particular version of the case definitely does. To begin with, the S10’s Liquid Air case feels thinner than previous iterations. It also features a shock-absorbing sleek frame, the company’s ‘Air Cushion Technology’ and as always, a geometric pattern on the rear that gives its matte black finish a unique look.

My favourite part of the pattern is that it seems to prevent grease and other debris from sticking to the case, which isn’t something I’ve been able to experience with other Spigen cases, particularly the Silicon Fit and other transparent cases. 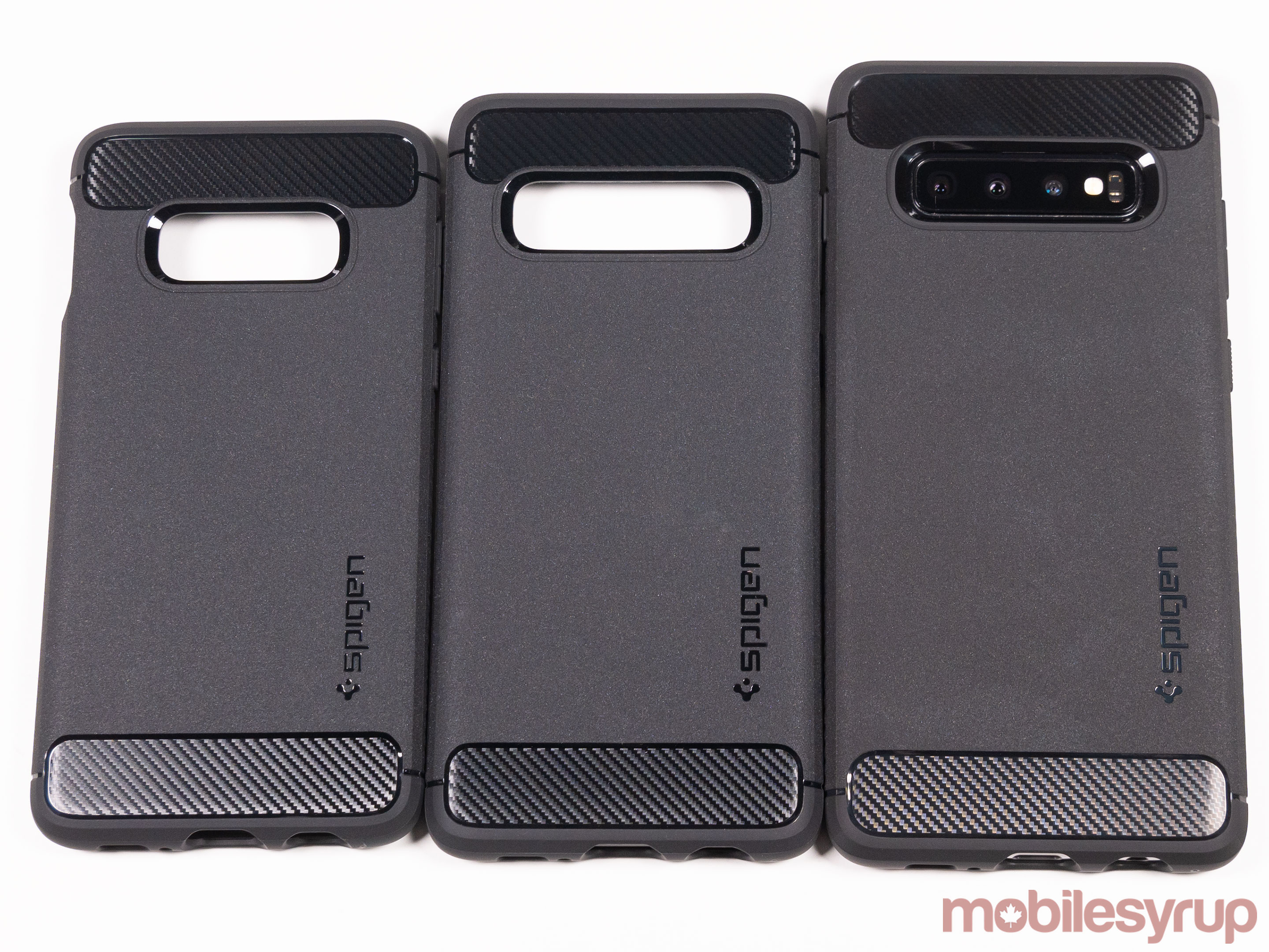 While I prefer the geometric rear of the Liquid Air to the Rugged Armor’s more industrial, matte design, the case offers a similar level of protection. It isn’t thick, which is great given how thin the S10 is without a case, and also adds additional grip to the slippery smartphone.

The case’s corners also feature Spigen’s ‘Air Cushion’ technology, ensuring that it should be able to help the S10’s glass front and back survive most falls. 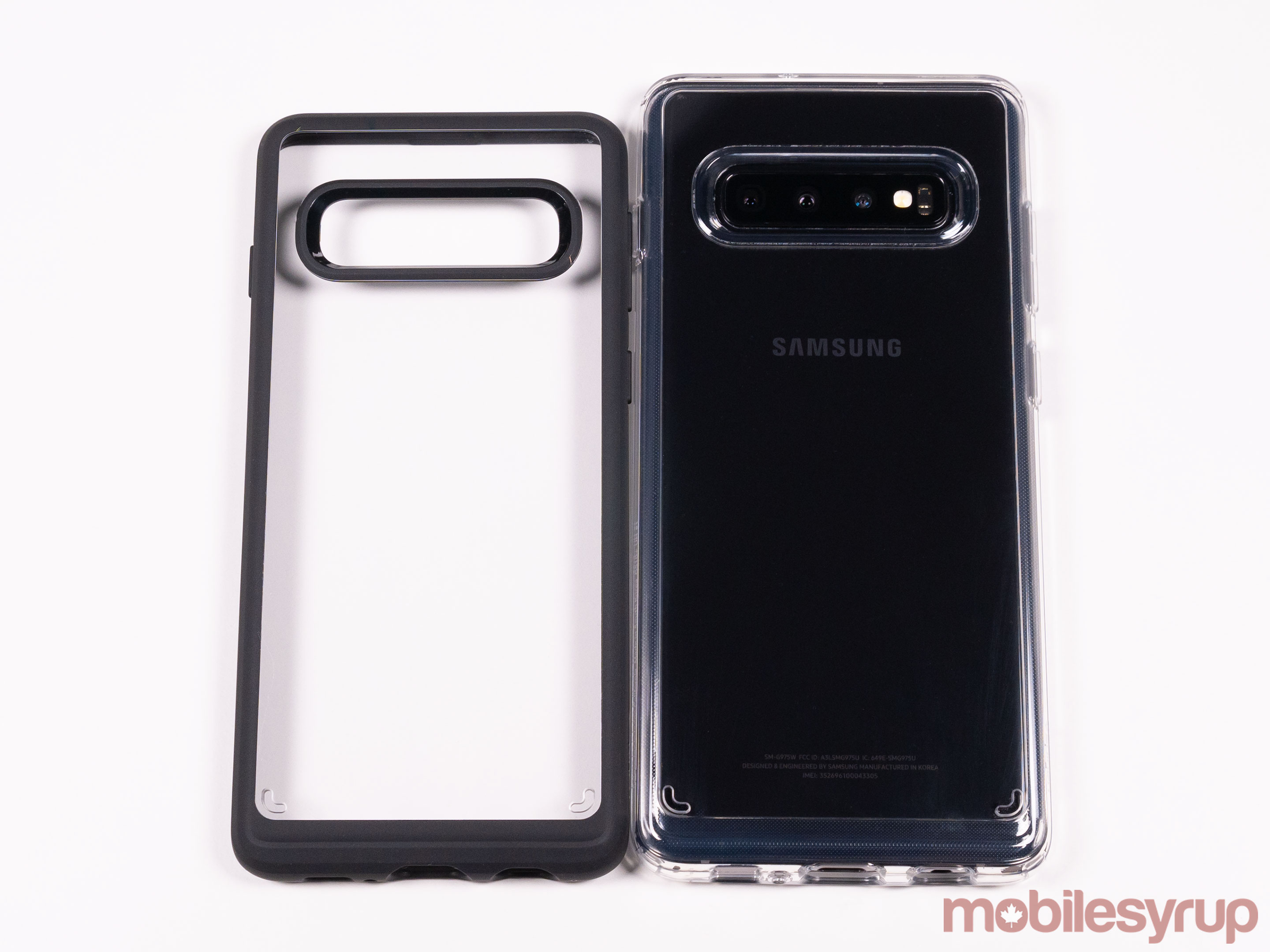 Spigen’s Ultra Hybrid case is very similar to its Liquid Crystal enclosure, only it’s a little more rigid and less sticky in its construction. The case also offers more protection than the Liquid Crystal thanks to its hybrid, shock-absorbent design and sizable bumper-like side.

If you opt the for the transparent version of the case, you’ll also still be able to show off the S10’s sleek body and colour. Spigen also sells an iteration of the Ultra Hybrid that features a black border and a transparent body. 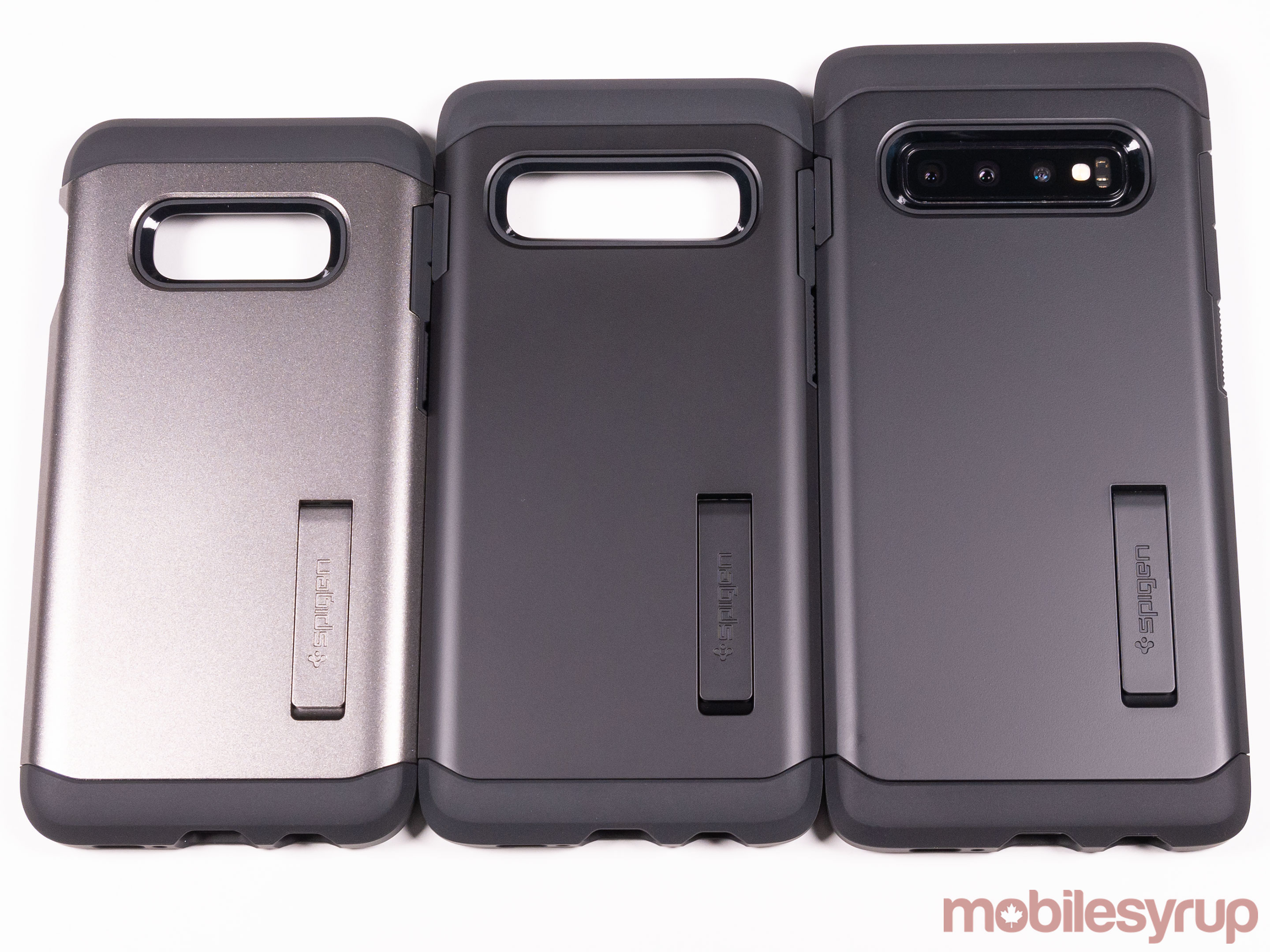 I’ve never been a big fan of Spigen’s Tough Armor case given that it’s a little too bulky for my taste, but it certainly does an excellent job of protecting the somewhat flimsy-feeling Galaxy S10.

And of course, as always, the Tough Amor case features a kickstand on its rear, which is great for watching video content on the Galaxy S10+’s impressive 6.4-inch 1440 x 3040 pixel resolution display. 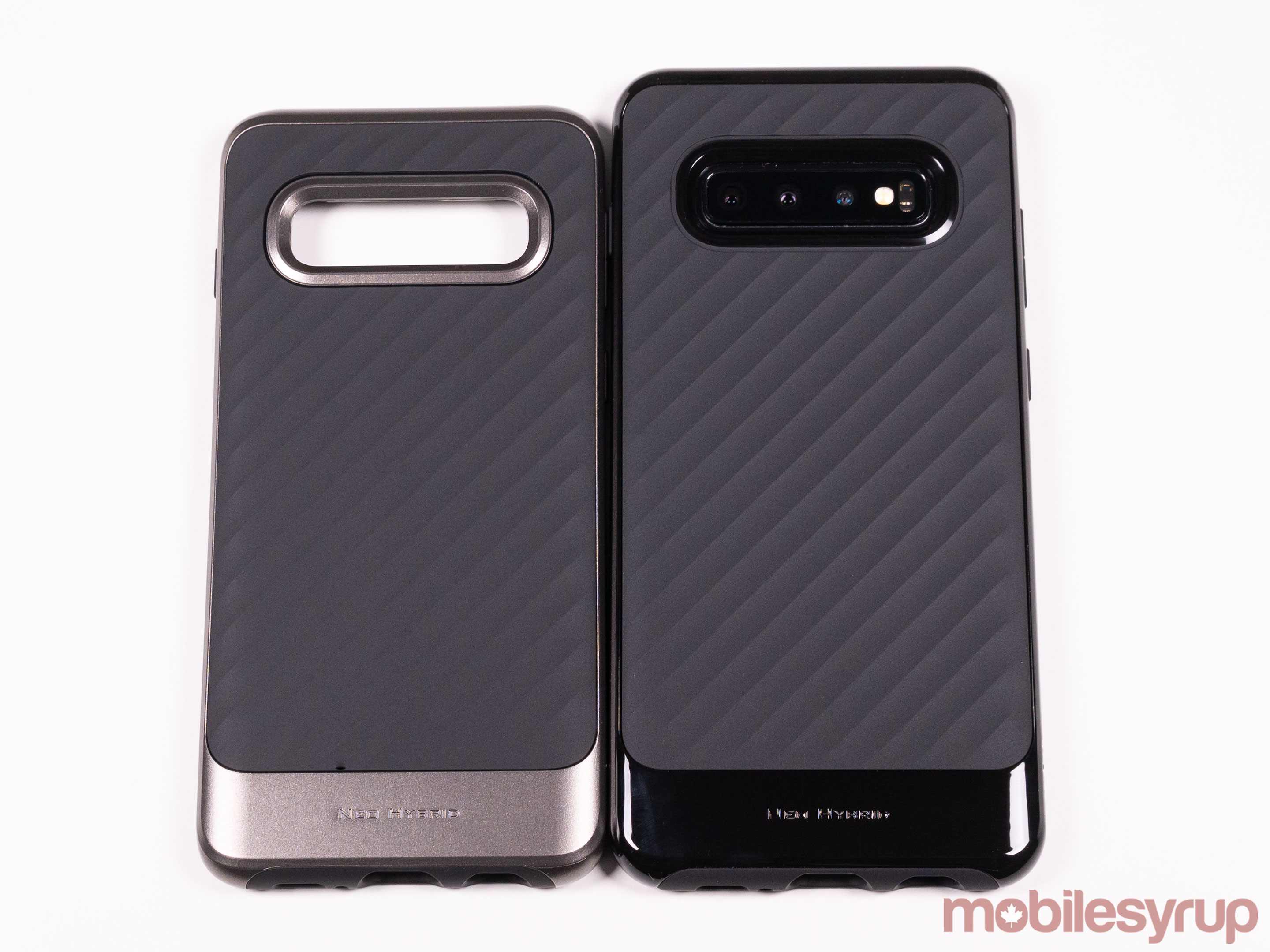 The rear design of the Neo Hybrid case for the S10 is not only cool looking, but also useful. The ridges add significant grip to the S10, which is a much-needed addition to the phone. The case also features the same level of protection of other enclosures from Spigen like the Rugged Armor or Liquid Air. 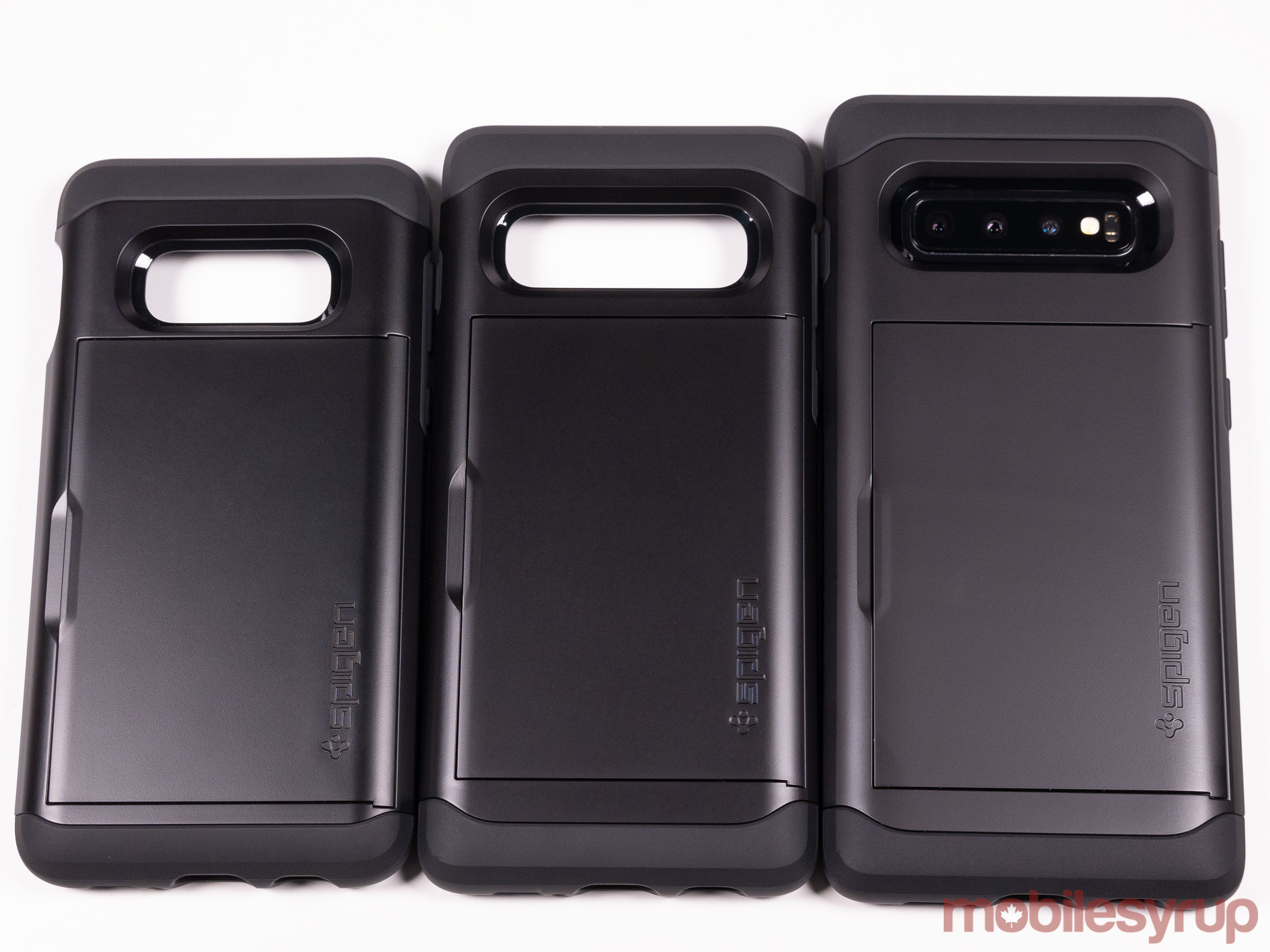 I also end up including the Slim Armor CS on my Spigen case lists because it’s a fan favourite. I have no interest in ditching my wallet for a smartphone case, but for those that have taken that route, or who are thinking of doing so, the Slim Armor CS is one of the best options out there.

The case features a hefty dual-layer design, along with a rear sliding back panel that provides ample storage for cash or a debit/credit card. The back panel also seems to snap together rather securely, so you don’t need to worry about losing your cards.

Spigen’s Silicon Fit cases are a relatively new addition to the company’s line of enclosures. The case is as lean as the Thin Fit, but offers more protection and a grippy outer shell. Unfortunately, similar to Apple’s silicon case offerings, the Thin Fit is a dust magnet, though it’s surprisingly resistant to grease.

This enclosure is a great option for someone looking for a little more protection than what the Thin Fit offers, but still wants a case that doesn’t add significant bulk to the S10.