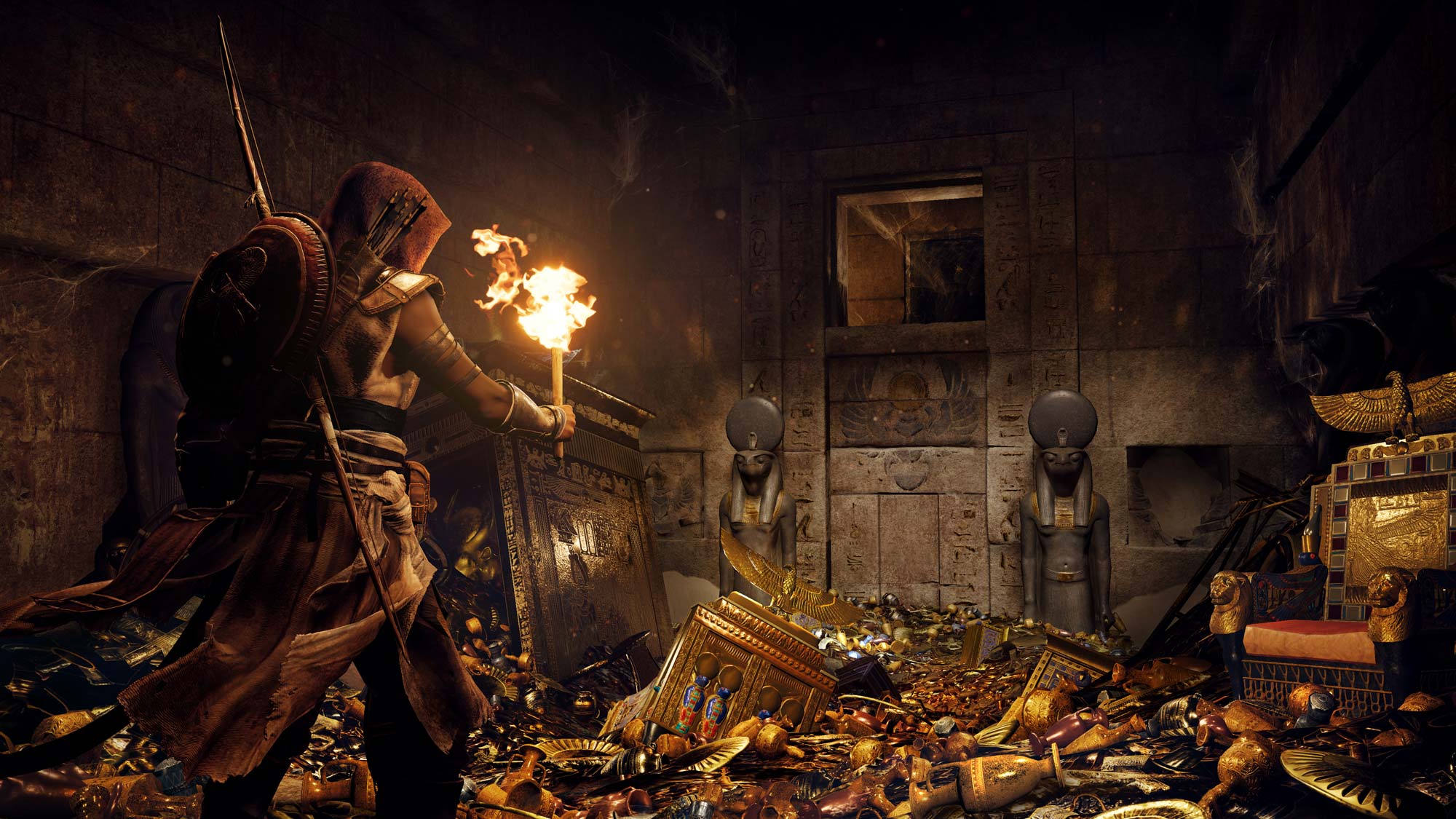 If Ubisoft Montreal’s Assassin’s Creed Origins was released in any other year, it would likely garner significantly more critical acclaim.

Unfortunately for Ubisoft, 2017 featured a number of impressive video games, especially of the open world variety, including The Legend of Zelda Breath of the Wild and Horizon Zero Dawn. While Origins is a formidable contender in its own right, the game is overshadowed by other titles that follow a similar mold.

Don’t get me wrong though: in many ways, Origins marks a return to form for the historic Assassin’s Creed franchise following the abysmal Unity and the vastly improved but uninspired Syndicate.

The game’s story is still relatively incomprehensible and follows an assassin named Bayek as he attempts to protect Eygpt’s Pharaoh. There are twists and turns, with memorable supporting characters like Bayek’s wife Aya and the ruthless Cleopatra, but like many Assassin’s Creed stories, the narrative gets too complicated for its own good roughly halfway through the game. 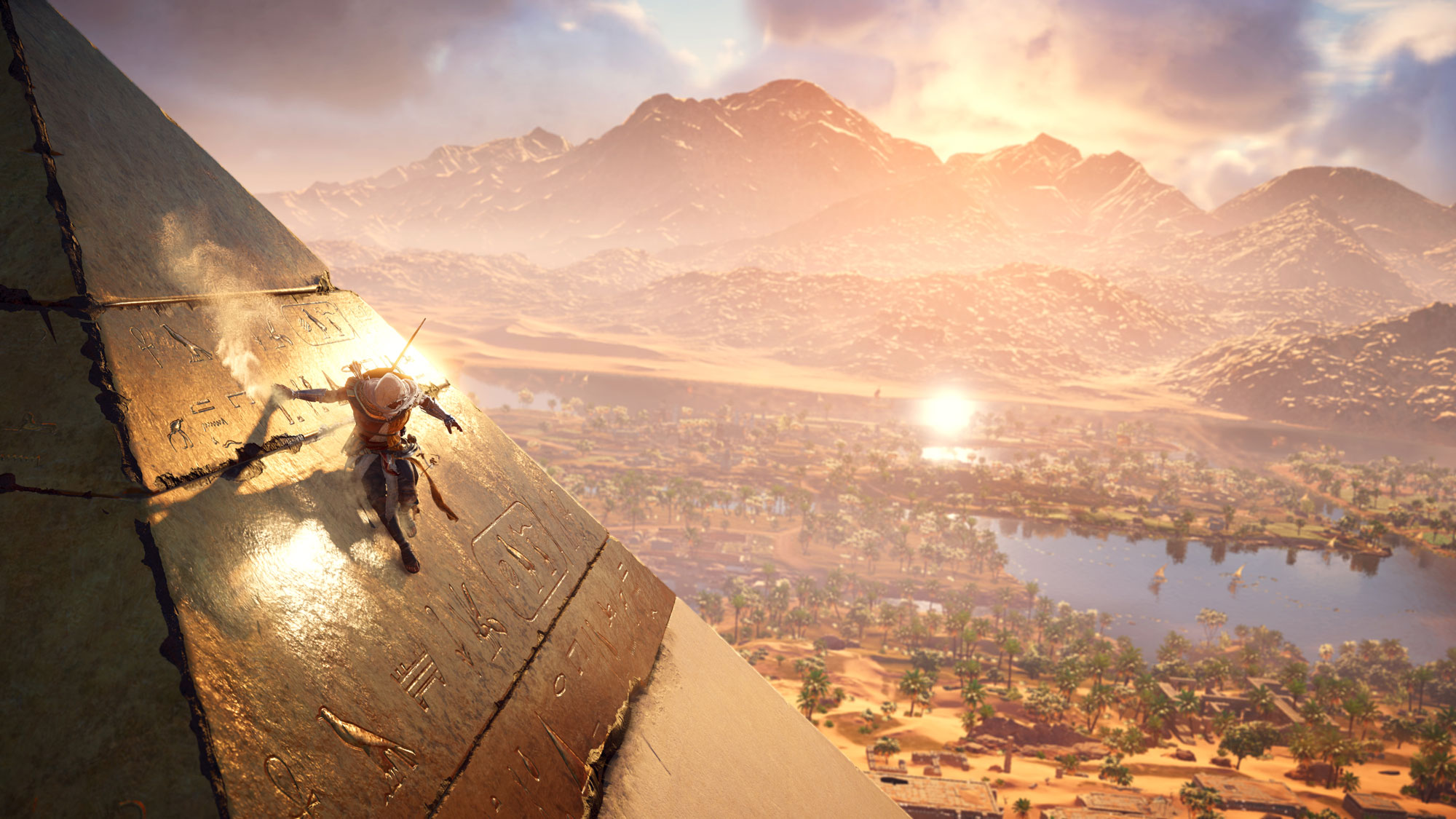 On the plus side, the present-day, sci-fi portions of Origins story are smartly kept to a minimum over the course of Bayek’s journey, just like in my favourite AC title, Assassin’s Creed IV Black Flag.

The real star of Origins is the game’s ancient Egypt setting, filled with massive pyramids, camels and perhaps most interestingly, regular citizens of the Ptolemaic Kingdom, giving the game’s world the impression of a living, breathing society. Next to Assassin’s Creed IV’s vast oceans and vibrant Caribbean islands, Origins rolling sand dunes and massive pyramids amount to the best backdrop ever featured in the series. 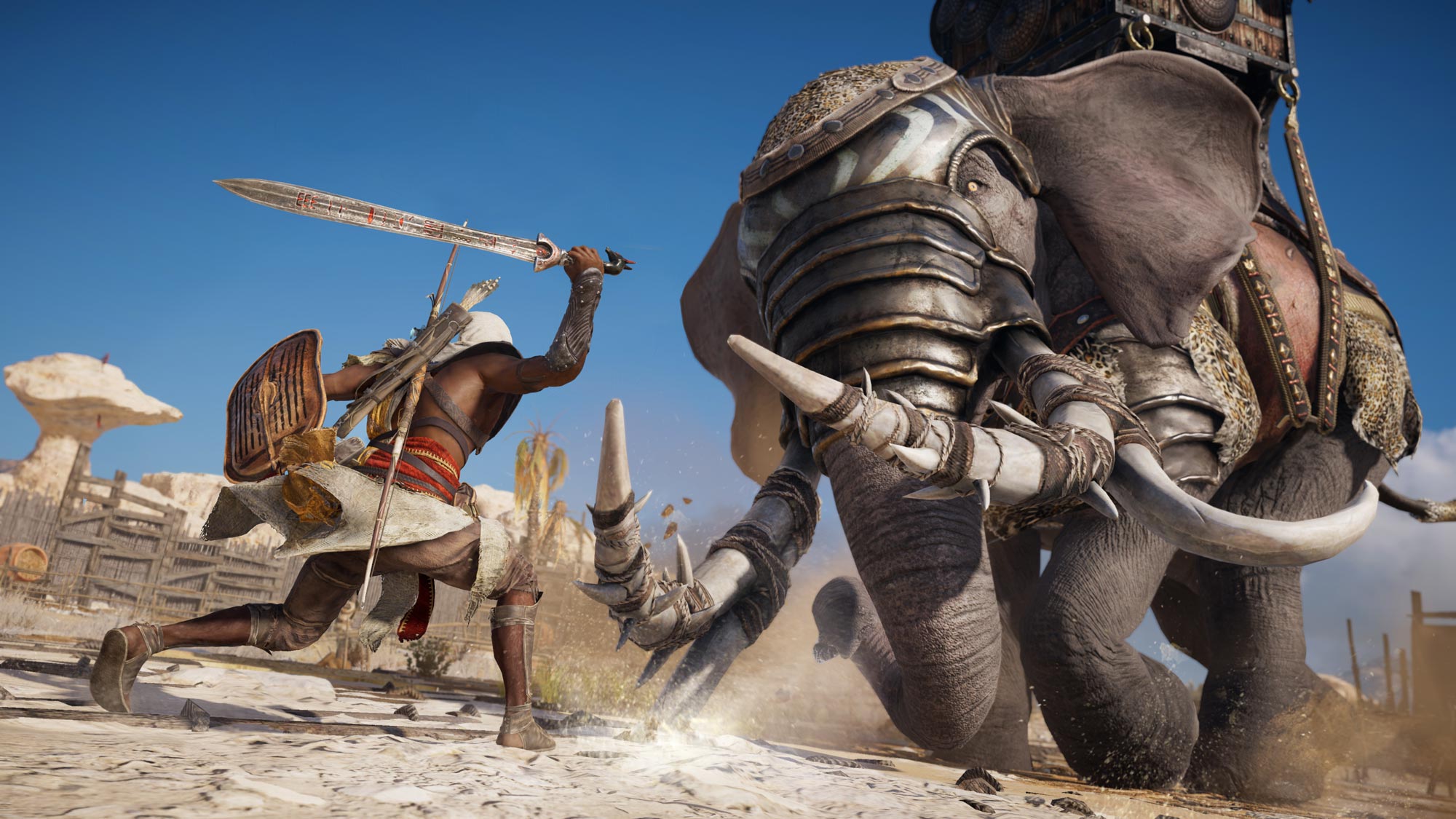 Both visually — especially when running on the Xbox One X in 4K (most of the time) —  and mechanically, Origins’ setting is a fascinating locale to spend time in. It’s absolutely bursting with things to do and the game’s side quests actually feel like they’ve been crafted with care — gone are the days when working through side missions in an AC game feels like an unnecessary and repetitive diversion.

Side quests are also an integral part of progression because, in some ways, Origins is the most gated open-world title I’ve ever played. I’d even go so far as to compare the game to an old school JRPG, with their steep level caps preventing players from moving forward before their character is adequately levelled up. 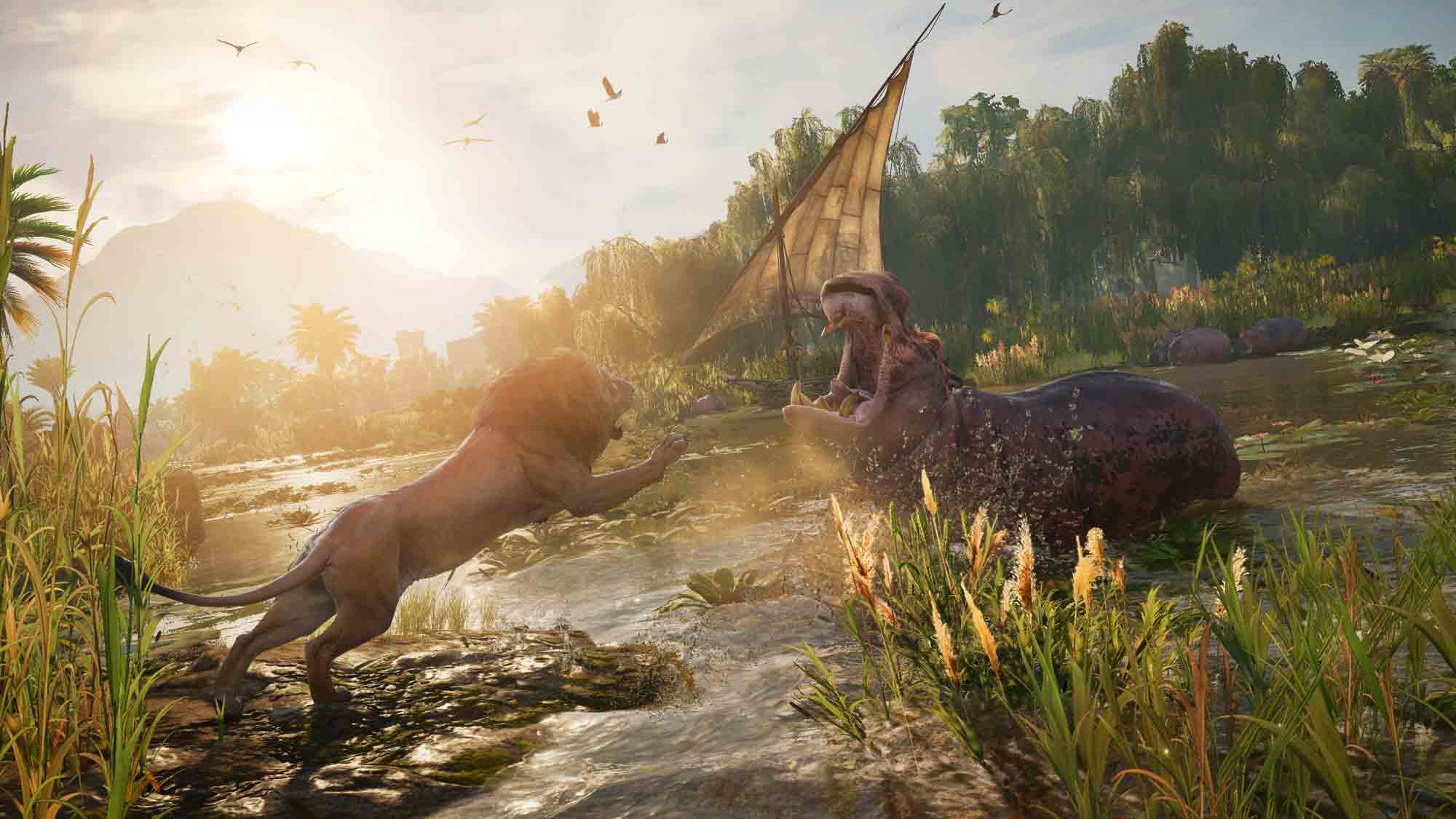 This is where side quests come into play. In order to progress through major main story missions, you’ll first need to complete a number of side quests to level up your character. If you don’t — like I opted to many times — you’ll get absolutely destroyed by your foes. Enemies will frequently take you down in one hit and regardless of how stealthy you try to operate, if you’re significantly under the recommended character level, odds are you won’t be able to successfully complete the quest.

Missions also continue with the open-ended nature that started with the release of Assassin’s Creed Unity — in hindsight, this was the only good thing about that particular entry in the series– giving players the ability to accomplish most missions however they see fit. 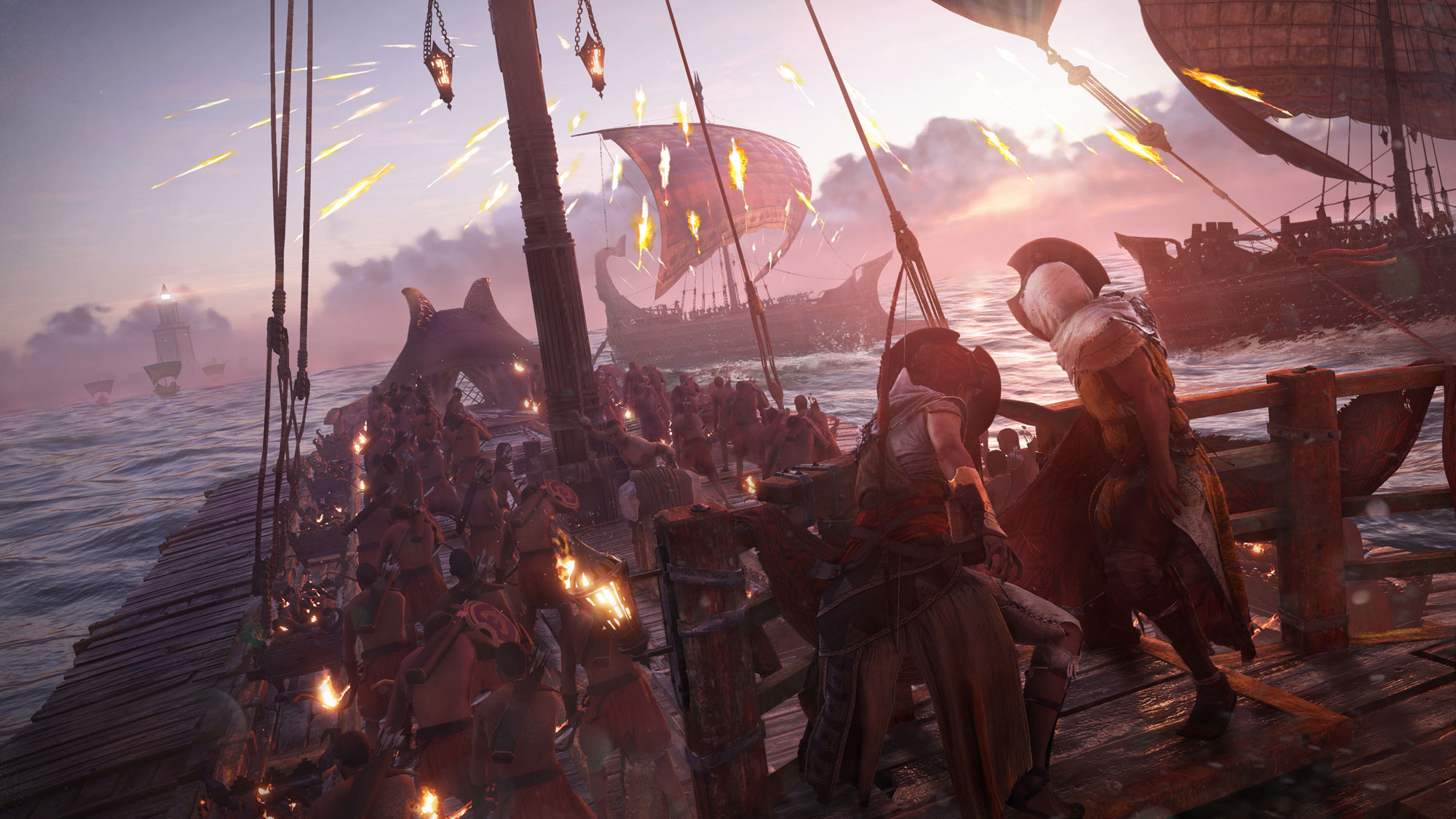 Do you prefer to attack your foes head-on, or are you the type of player who enjoys sneaking into an area and taking down your enemies, then leaving before they even know you’ve been there? Both play styles are possible in Origins and usually work equally well. As someone who rarely operates stealthily in video games, I also appreciate that the experience doesn’t fall apart once you’ve been detected.

That said, Origins is still an Assassin’s Creed game, warts and all. This means the title is chocked-full of silly glitches and that free-running remains an integral, but still frustrating part of the series. I’d rather not admit the number of times I accidentally ran up a wall or jumped off a cliff, resulting in my death or revealing my location to enemies when attempting to tackle a stage with a focus on stealth. Given how long the franchise has been around, it’s strange that the same parkour mechanics have remained largely the same since its inception way back in 2007.

While much of Assassin’s Creed Origins is visually impressive, characters’ faces are flat, dead-eyed and generally lack any semblance of realistic emotion. In contrast to the lavish environments and over-the-top cinematic sequences found in the game, the lack of attention when it comes to facial animation is astounding. Even when taking the fact that Origins is an open world title into consideration, the game’s facial animations are significantly behind the broader video game industry. Hopefully this is a feature Ubisoft aims to improve in the next entry in the Assassin’s Creed franchise. 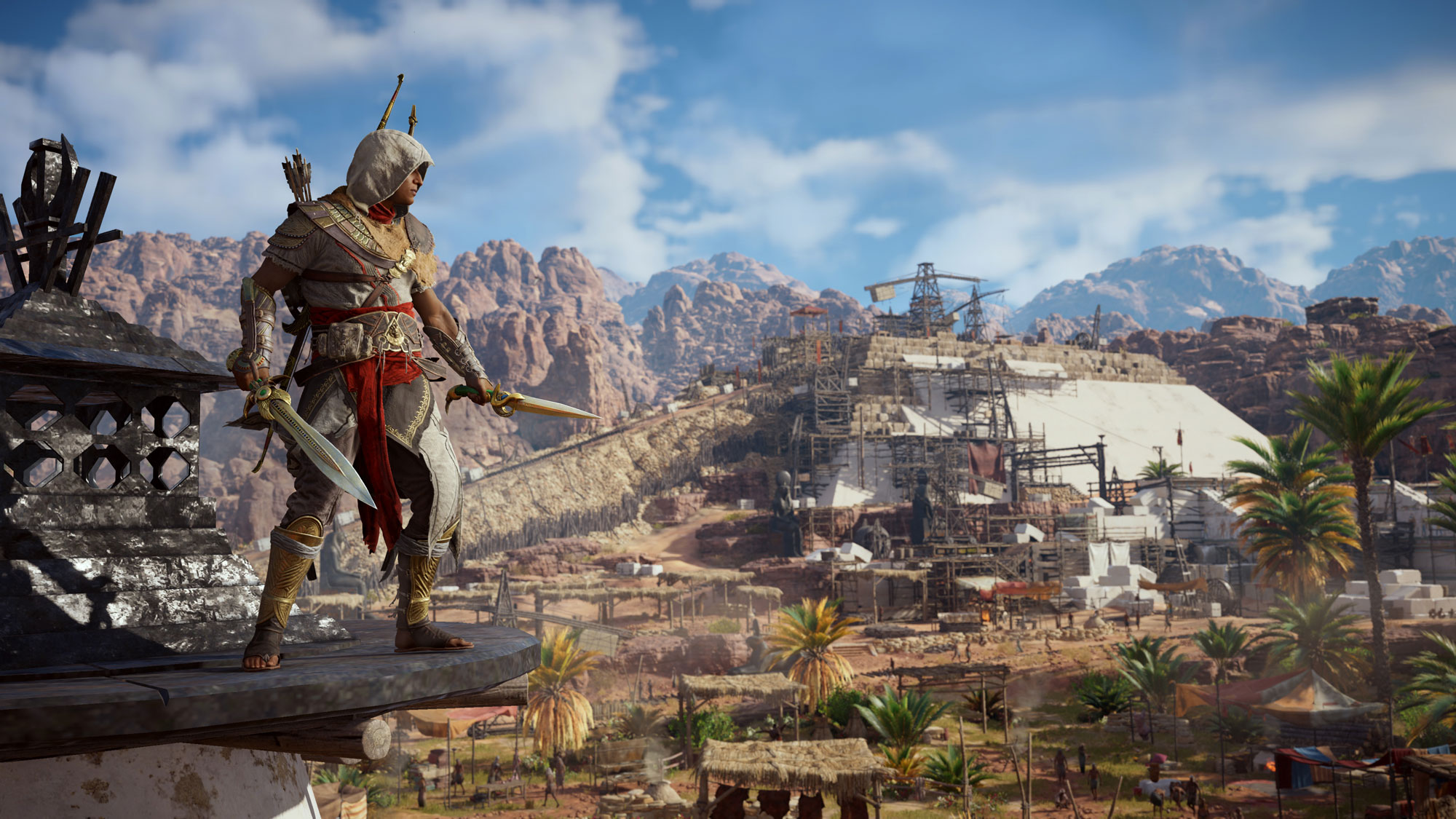 Assassin’s Creed Origins isn’t a perfect game by any means, with its lacklustre facial animations and convoluted plot being the title’s two biggest issues — but it’s still the best AC title in years. On the plus side, the game’s ancient Egypt setting is a joy to explore and just absorb its historic, culture-rich setting. This isn’t something I’ve been able to say about an Assassin’s Creed title for years.

Origins combat system is also a significant step in the correct direction for the series, coupled with the way it handles loot and its emphasis on side quests that are actually fun playing, has resulted in the best Assassin’s Creed game since 2013’s Black Flag.

If you’ve been on the fence in terms of the last few entries in the Assassin’s Creed series, Origins is a worthwhile time to get back into the franchise.

Assassin’s Creed Origins is available on the Xbox One, PlayStation 4 and PC for $79 CAD.