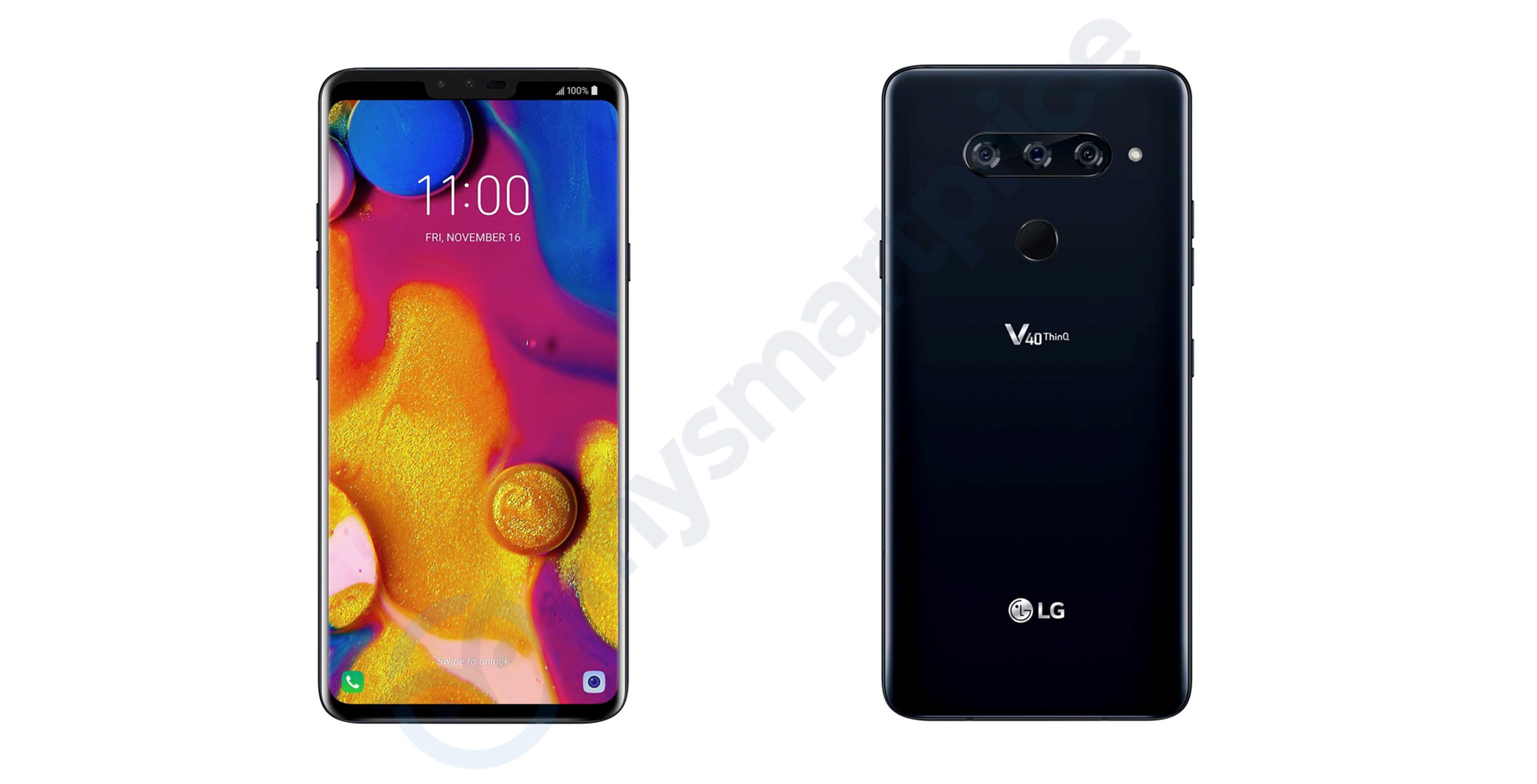 South Korean smartphone manufacturer LG has released some great smartphones over the past few years.

While the company slipped up with the LG G5 and its ‘Friends‘ modular accessories, as well opted to put an older processor in the LG G6, the more recently released V30 and G7 ThinQ are solid smartphones.

Now it’s about time for the LG V40 ThinQ. With last year’s V30 often being referred to as a multimedia winner, expectations for the V40 are currently very high.

Here’s everything that we know so far about the LG V40 ThinQ.

This story will be updated with the latest news about the LG V40 ThinQ until LG officially unveils the phone.

The V40’s specs have leaked courtesy of ‘SlashLeaks.’ While the website only trusts the source at a rate of 33 percent, the actual specifications indicated here seem quite likely.

LG has confirmed that it will unveil its coming smartphone, the LG V40 ThinQ on October 3rd. The company revealed this information with a teaser video. The video indicates that the phone will be able to have some sort of zoom-in functionality. Whether it’s digital zoom, optical zoom or a mixture of both, is currently unclear.

The LG V40 ThinQ might have just received its Federal Communications Commission (FCC) certification. A device under the model number “LM-V405UA” was recently spotted today, September 11th, on the FCC’s website.

Looking back at previous LG phones, the G7 featured the model number LM-G710 and the LG V35, that never made its way to Canada, had the LM-V350 model number.

Phones typically hit FCC a month to a month and a half before they are officially unveiled, meaning the V40 seems to be on its way.

Leaker OnLeaks has partnered with SlashLeaks to reveal high-quality renders of the LG V40. The renders indicate that the phone will sport a 6.3-inch display and measures at 58.8mm x 75.8mm x 7.8mm (8.2mm if you include the camera bump). As always, OnLeaks bases the dimensions and renders on factory CAD images.

Images of the LG V40 ThinQ have surfaced online. The pictures, sourced from MySmartPrice, confirm that the upcoming smartphone will feature three cameras.

According to the leak, LG will place the phone’s cameras horizontally next to its flash. The fingerprint sensor is also situated below the camera-setup, along with V40 ThinQ branding. Meanwhile, the front will feature a notch with two front-facing cameras with a speaker placed beside them inside the notch. 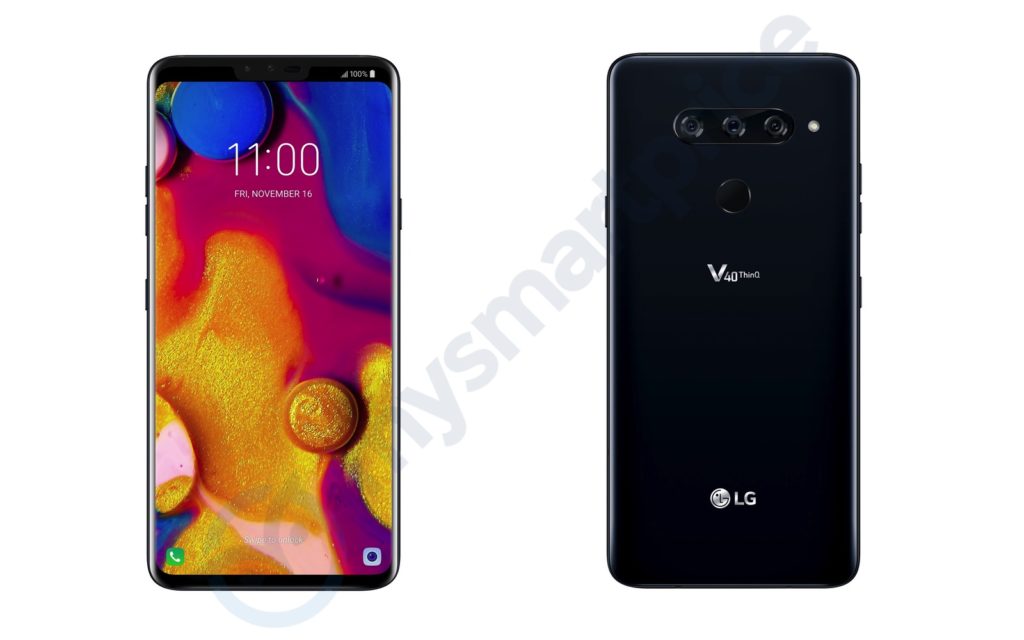 The image also reveals that the Google Assistant button is back on the side opposite from the volume rocker. Additionally, the rumour indicates that LG will continue to place a 3.5mm headphone jack. The phone is also expected to run Qualcomm’s Snapdragon 845, similar to the LG G7 ThinQ.

While LG revealed the V30 in August last year, MySmartPrice indicates that LG will unveil the phone on November 16th. With LG unveiling the G7 ThinQ in May, two months later than G6 in 2017, November 16th seems quite plausible.

News from South Korean publication ET News reveals that the LG V40 ThinQ will sport a 90 percent screen-to-body ratio. Further, the publication says the phone will support 20-megapixel, 16-megapixel and 13-megapixel rear camera shooters. While the two front cameras will be used for a 3D mapping face unlock feature.

The information indicated that the V40 will sport five total cameras, with two being located on the front and three on the rear. The two front cameras will support a face unlocking feature for 3D mapping — also mentioned in the ET News post — and the rear will sport three cameras.

One camera will feature a standard wide lens, while another is rumoured to include an ultra-wide lens and the third is currently undetermined, though Android Police notes it could possibly be a zoom lens or designed for specific depth-of-field effects.

Currently, the specs of the device are unknown, but here’s what we know about the V40 so far:

While it’s unclear what exactly will be featured in the LG V40 ThinQ in terms of specs, there are some things we can guess about the handset.

It’s possible the P-OLED display will make its way back with the V40 ThinQ. According to an interview with Android Headlines LG will save its OLED displays for its V-series handsets, as the company believes the V-series is for a more niche market.

Rumours predict that the V-series will feature five cameras. While five cameras will be a first for smartphones, LG’s V series lineup is the place to do it. According to Frank Lee, LG MobileComm USA’s director of public relations, the V-series is the testing ground for flagship features.

LG’s V-series handsets also typically feature larger displays when compared to the phone’s G-series counterparts. While the G7 ThinQ is the largest G-series smartphone to date, the LG V40 ThinQ, might feature an even larger display — likely not by much, but enough that it’s comparable to one of LG’s top competitors, Samsung and its Note 9’s 6.4-inch display.