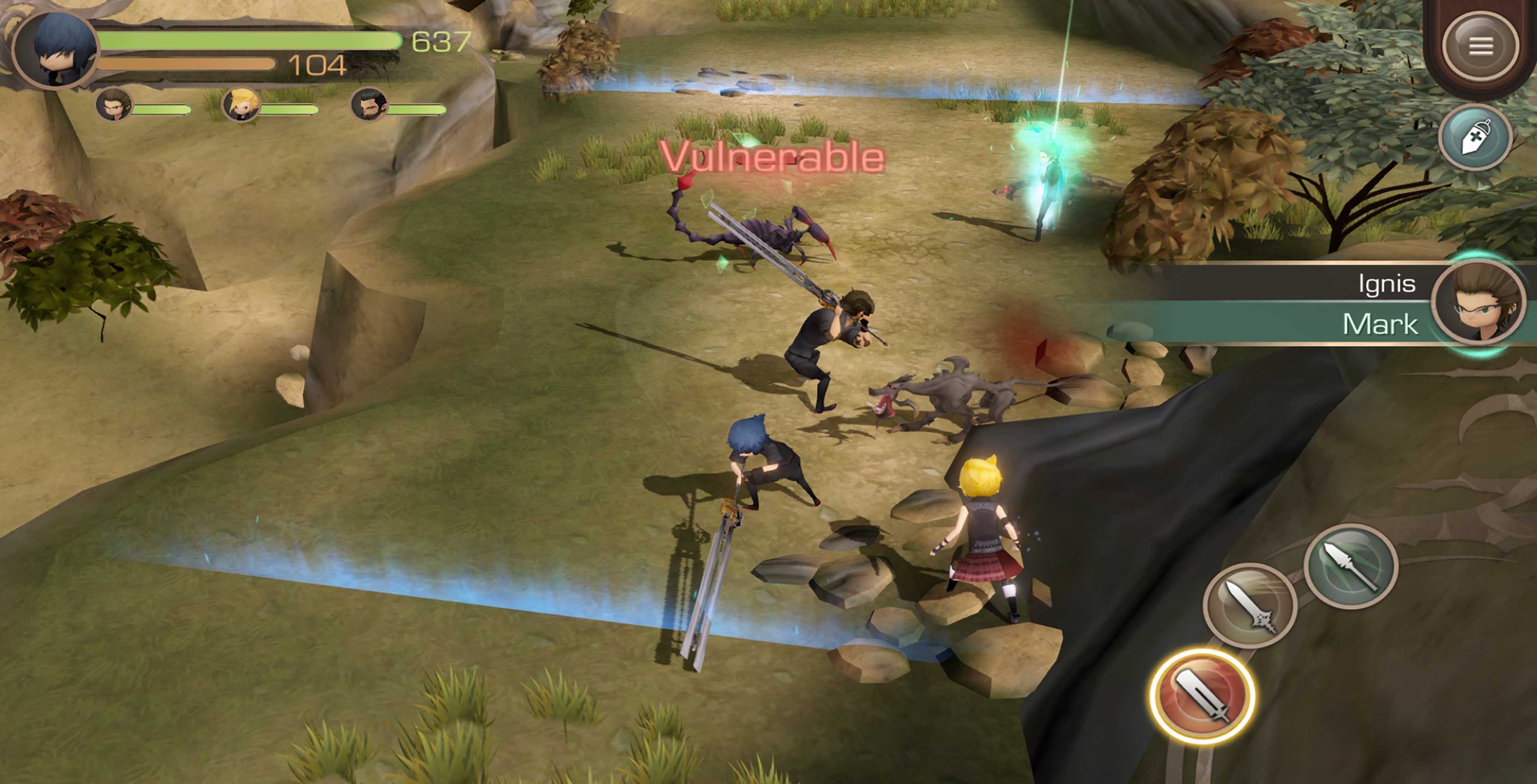 It’s not uncommon in the gaming industry for a publisher to release a mobile game that serves as a smaller companion to the main console/PC experience. Typically, these titles feature completely mobile-optimized gameplay features, like the portable versions of Middle-earth: Shadow of War and Injustice 2.

In Final Fantasy XV, players assume the role of Noctis, a young prince sent from the kingdom of Lucis to broker a treaty with the warring nation of Niflheim. With the help of his friends Ignis, Gladiolus and Prompto, Noctis must travel across the land to meet Lunafreya, a childhood friend he is now set to marry in order to sign an armistice between Lucis and Niflheim. Of course, things don’t quite go according to plan, and that’s where the game kicks off.

In Pocket Edition, you’ll be engaging in the same real-time combat found in the base game, albeit through a more cartoonish art style. What’s most impressive, though, is that practically every gameplay mechanic has been carried over in some capacity. As Noctis, you’ll be able to warp around environments, dodge and parry incoming attacks, switch between weapons like swords and spears and command your friends to use powerful team-based Techniques — just as you would in the original Final Fantasy XV. This all translates well to mobile, with simple and intuitive swipe and tap controls letting you manage all of your combat options. 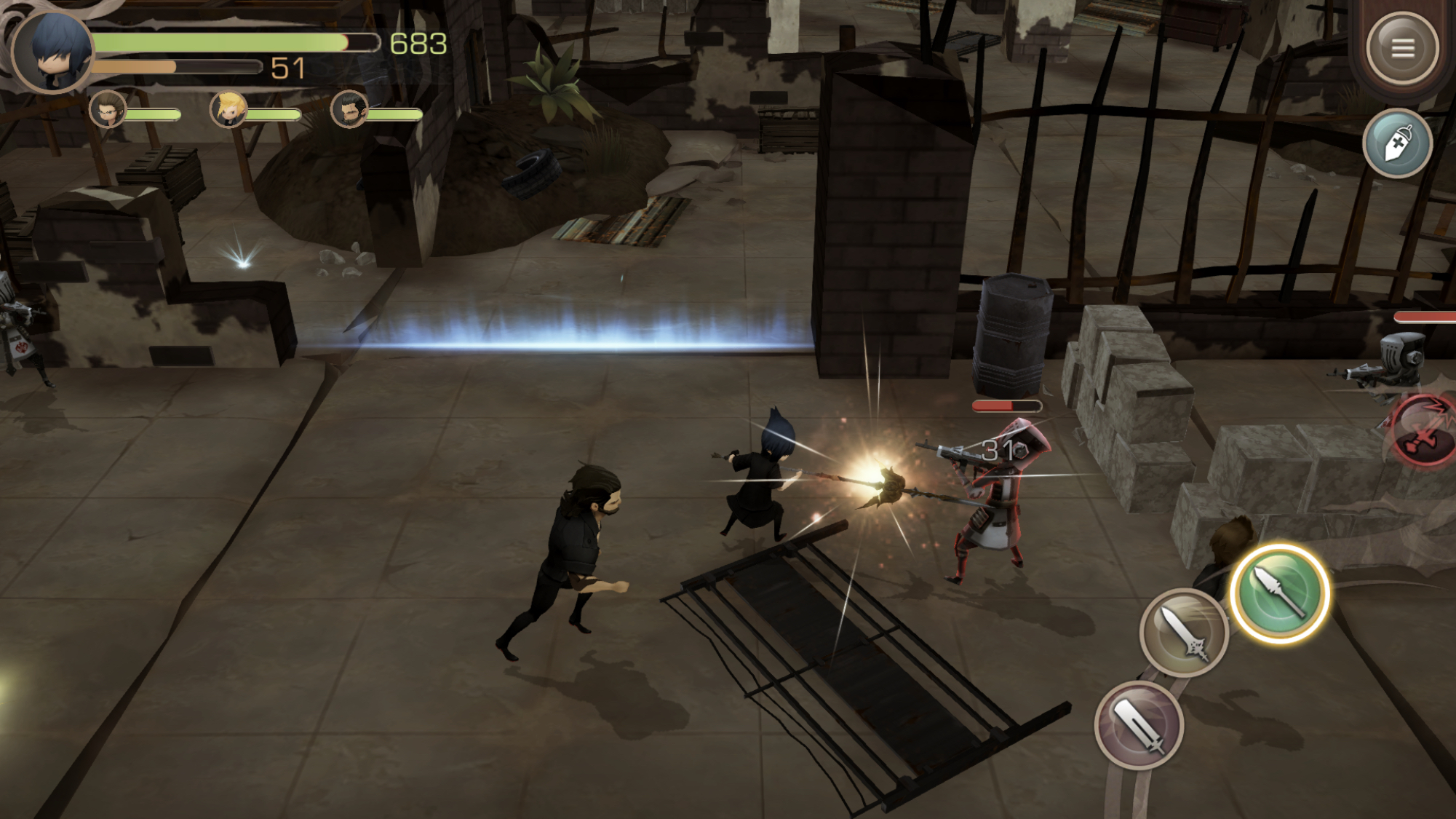 Outside of combat, you can engage in side quests like collecting items for people and finding ingredients for Ignis’ signature new recipes. As in the main game, Ignis’ food will provide temporary stat buffs for your party, depending on which dish he prepares. You’ll also be able to level up your characters and learn new abilities, as well as equip them with additional equipment that can be purchased in the game’s various towns.

Audio has also been taken straight from the console game, meaning you’ll hear the same lively sound effects and solid character voice acting in Pocket Edition as well. The endearing banter between the four friends has been brought over in full, giving plenty of character to moments that may have otherwise been quite dull. This is particularly welcome during moments when your characters are travelling in Noctis’ car, the Regalia, as Pocket Edition doesn’t let you drive around freely like the main game does. 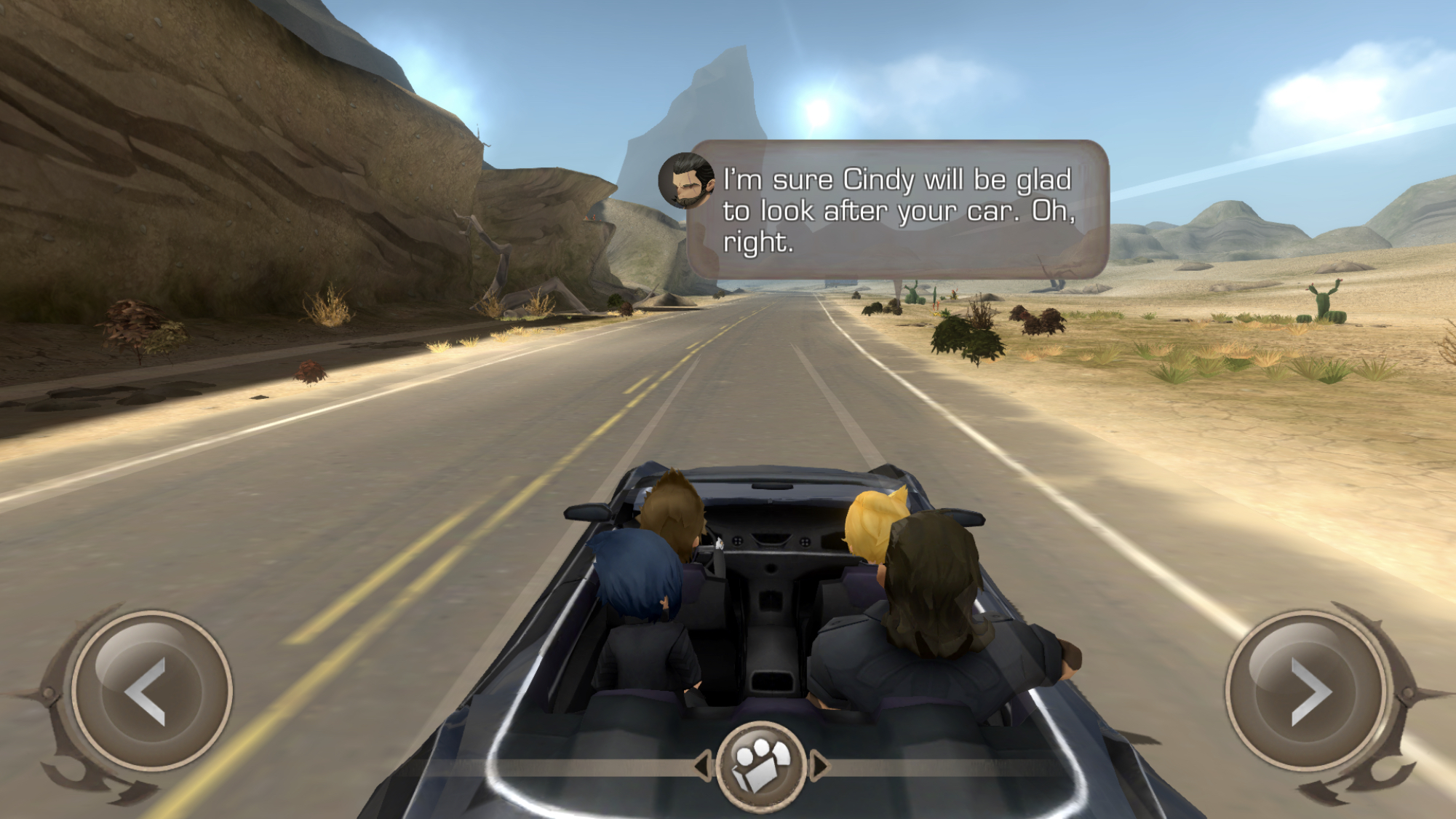 Structurally, Pocket Edition is an episodic game; Square Enix will be offering the first chapter for free, with the remaining nine chapters available for purchase afterwards. If the introductory chapter is any indication, Pocket Edition‘s episodes contain a surprising amount of content, featuring several quests — of both the main and side variety — and story cutscenes that lasted at least two hours.

Pocket Edition’s episodic format also trims a lot of the fat of the original, which suffered from pacing issues stemming from a beautiful-yet-empty vast open-world. Indeed, Pocket Edition is a veritable “Greatest Hits” collection of key moments of the main game, allowing you to experience the best parts of the story and enemy encounters without being bogged down by substantial filler. 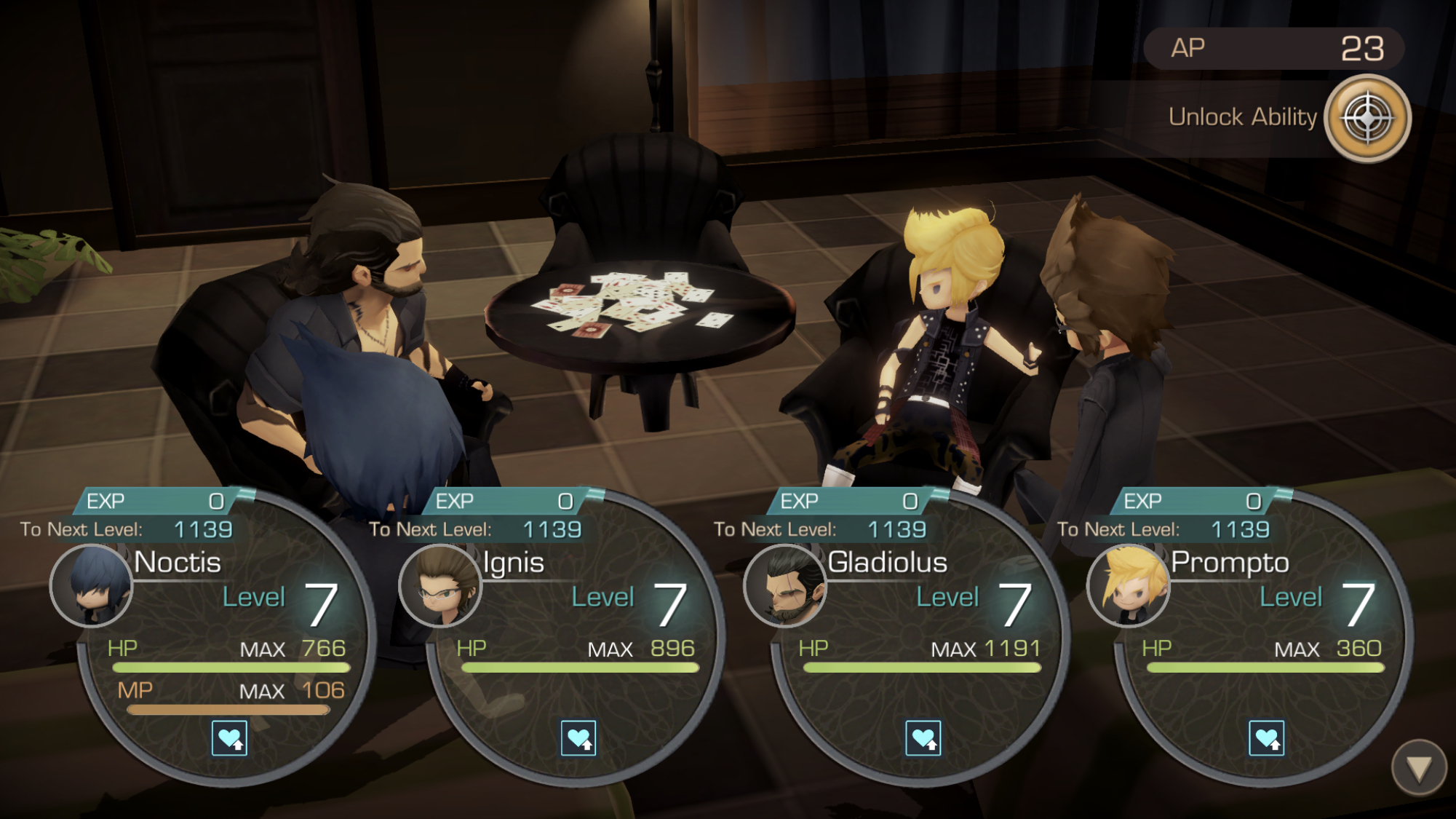 From the introductory quests of repairing the Regalia in countryside town Hammerhead, to later battles against dragoon Aranea Highwind and certain iconic Final Fantasy summons, Pocket Edition touches on all of the major beats from the base game.

As someone who played through all of Final Fantasy XV, I was constantly impressed by Pocket Edition‘s interpretation of some of the most prominent parts of that game. While the story intrigue unfortunately peters out toward the end, Pocket Edition nonetheless remains fun to play throughout. 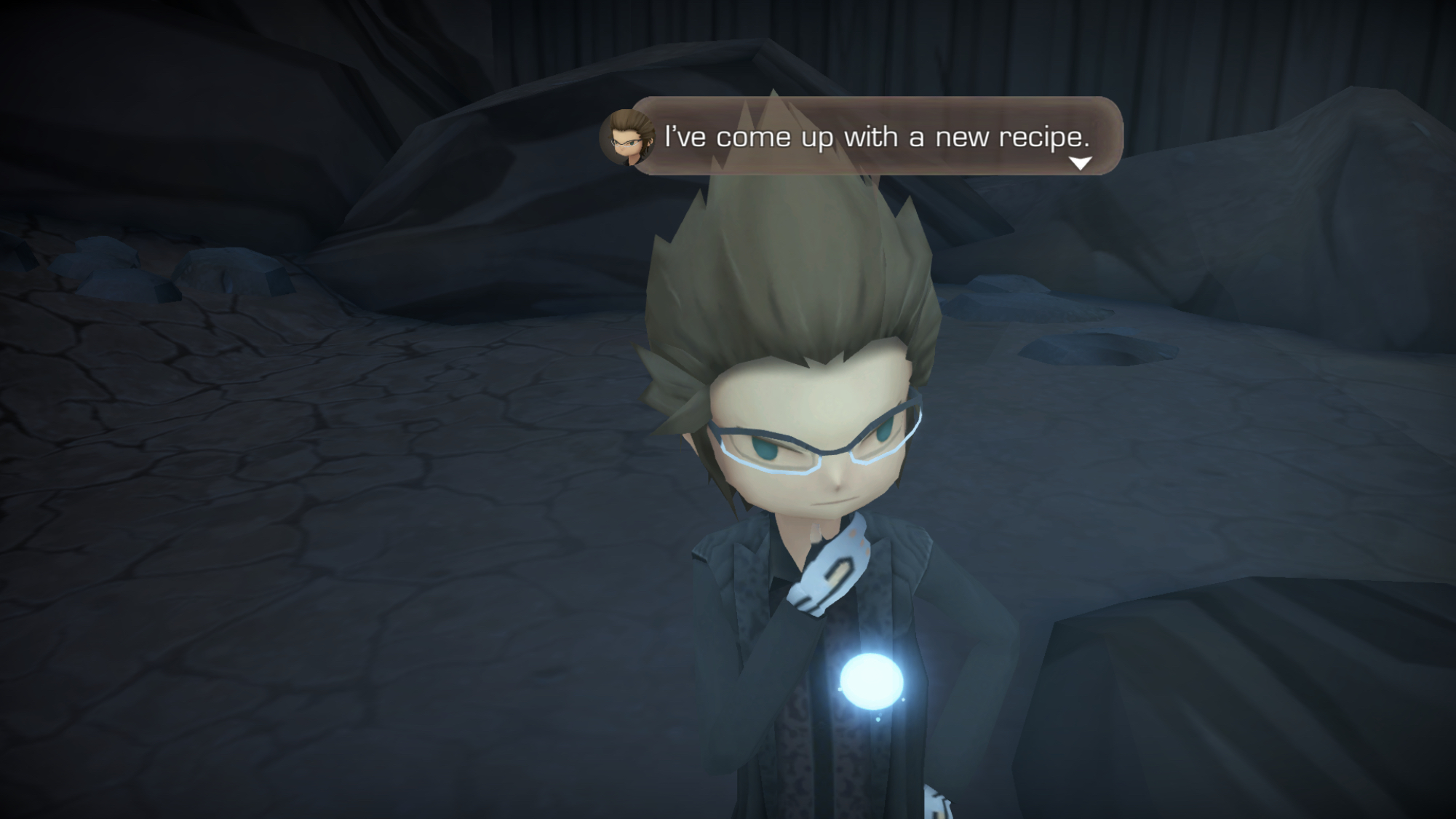 Final Fantasy XV: Pocket Edition will be released on Friday, February 9th on Android and iOS.