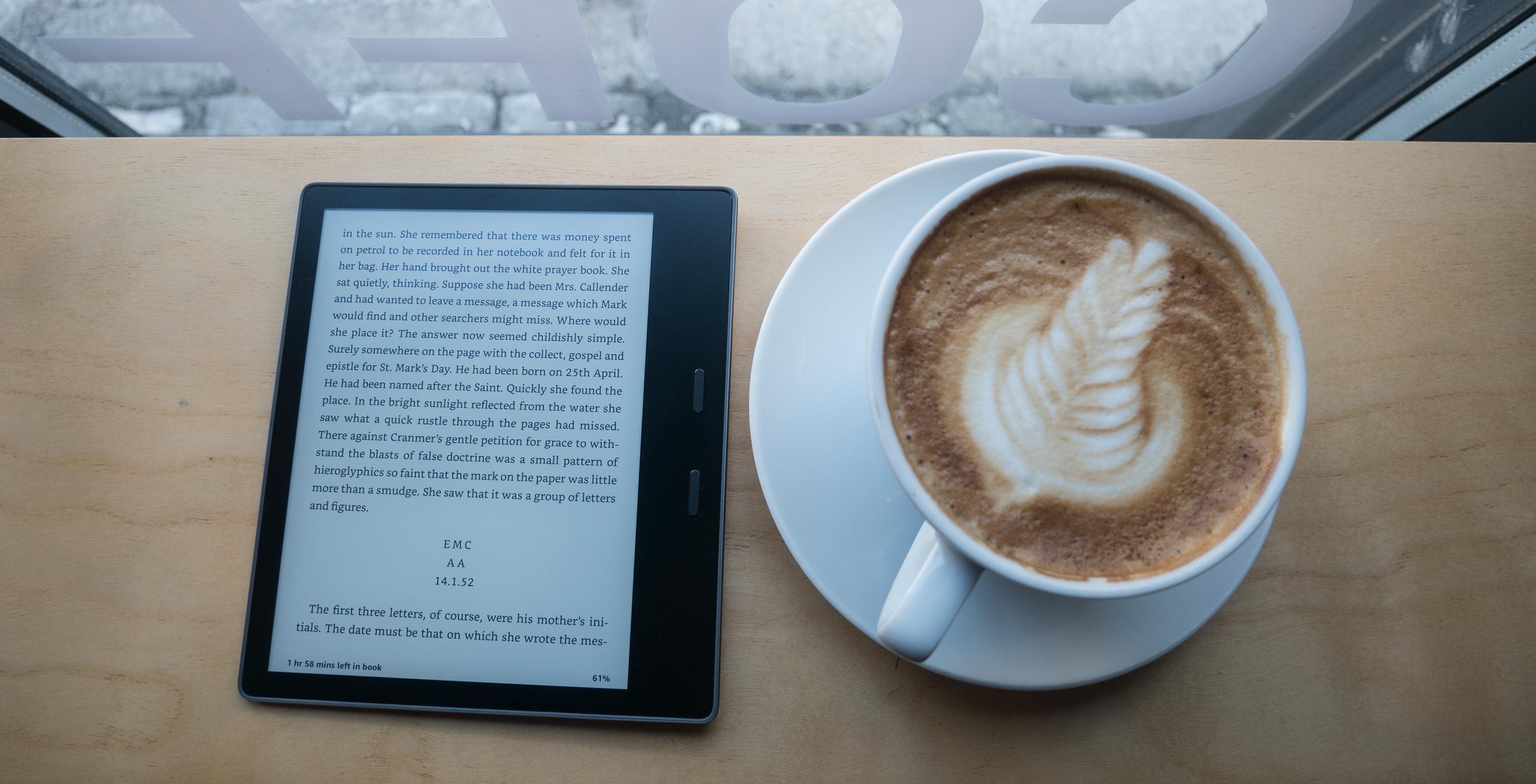 The 2017 Kindle Oasis is arguably the most ideal e-reader on the market. It draws from the best elements of both its elegant predecessor and last year’s durable, plus-sized Kobo Aura One, all with a much-improved battery.

But is it worth the extra cash over the less premium Kindle iterations or Kobo devices? After all, the e-reader starts at $389.99 CAD for a Wi-Fi-only, 8GB variant, far above the $250 CAD Kobo charges for its top-of-the-line e-reader.

Surprisingly enough, the answer might be yes — at least for those looking for the very best e-reading experience on the market

At a basic level, all e-readers perform the same basic function — displaying text — but there are several key elements that make the 2017 Oasis significantly more comfortable, intuitive and durable than the majority of its competition.

Amazon has once again made its most premium Kindle extremely friendly to left-handers. Its brilliant design features page-turning buttons along one side of the device that line up close to the thumb for right-handers when held one way, and close to the thumb for left-handers when turned upside down. In either case, this is a major benefit because the tactile buttons are so much more pleasant to use than the touchscreen. 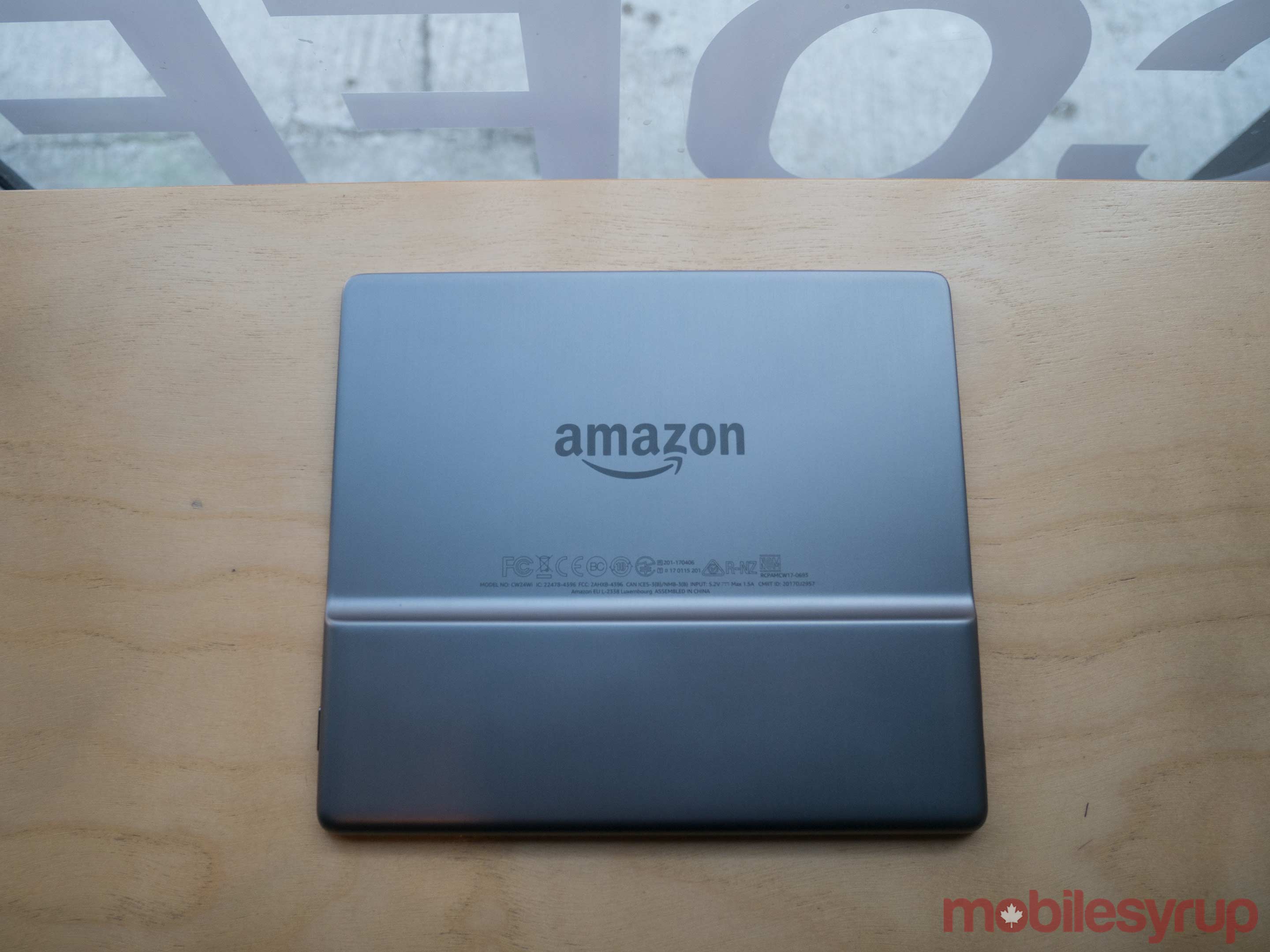 There’s far less opportunity for mis-clicks and accidental activations. This isn’t because the display is unresponsive — I actually find it much more responsive than on the Kobo Aura One — it’s simply the nature of touch screens versus dedicated hardware buttons.

The device is also designed to be ergonomic, putting more weight in the side that you’re holding, and adding a ledge that you can grip. This is especially useful because the brushed metal back can be slippery in comparison to the Kobo Aura One and other less premium Kindles and Kobos, which have grippy textured backs. 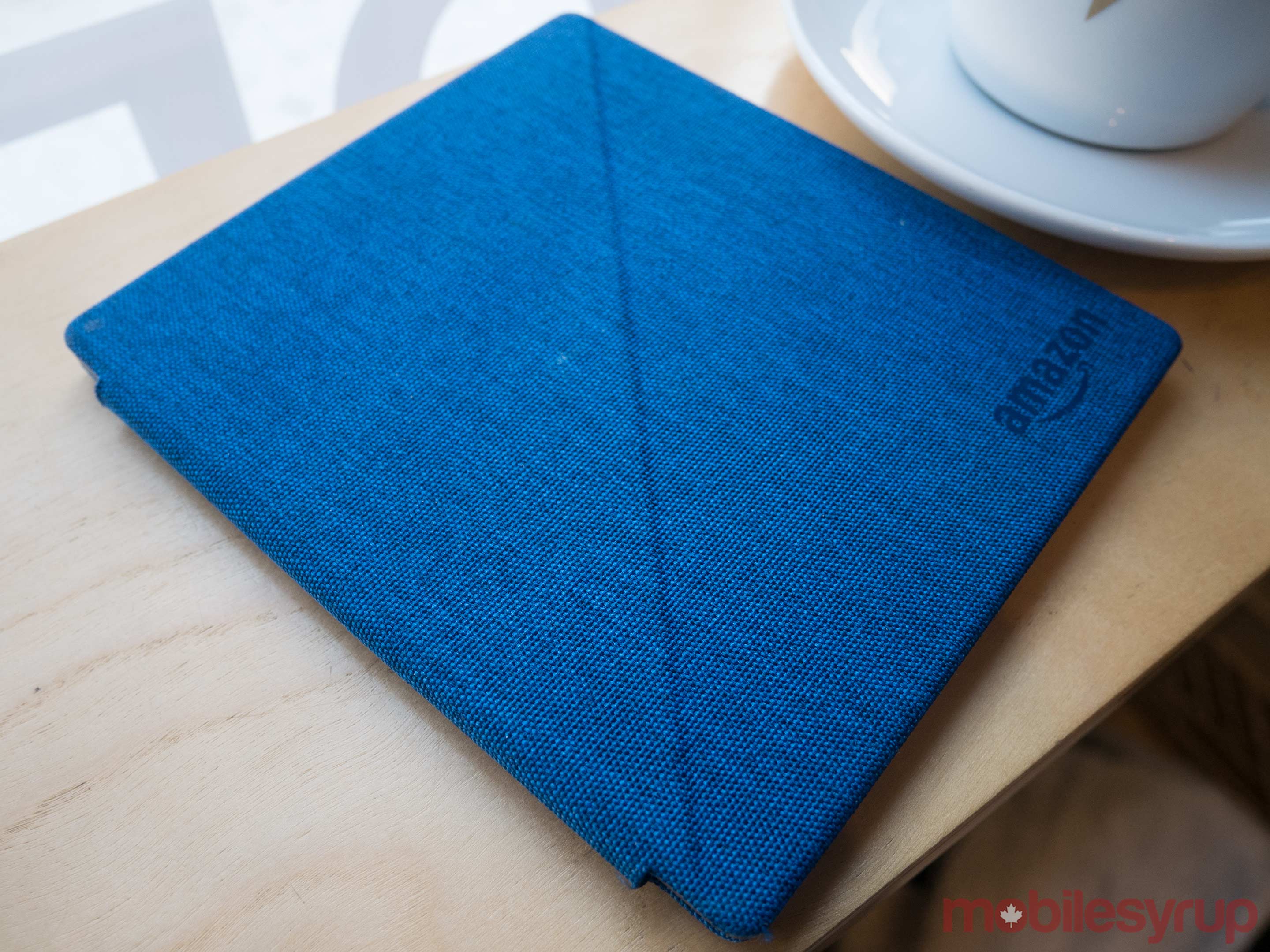 This year, the cover plays a less functional role than with the 2016 Kindle Oasis. Whereas previously the cover came included and featured a second battery for extra-long-lasting life (a claim that didn’t exactly prove itself accurate), now the cover is optional and while still magnetic, it doesn’t offer any battery charging. This is probably for the better, considering the battery only seemed to discharge more quickly on the 2016 Kindle Oasis when its battery cover was attached.

The 2017 Kindle features a single micro USB connector, staying in step with the Kobo Aura One but making itself somewhat outmoded compared to the rest of the consumer tech world, which is quickly transferring over to USB-C. 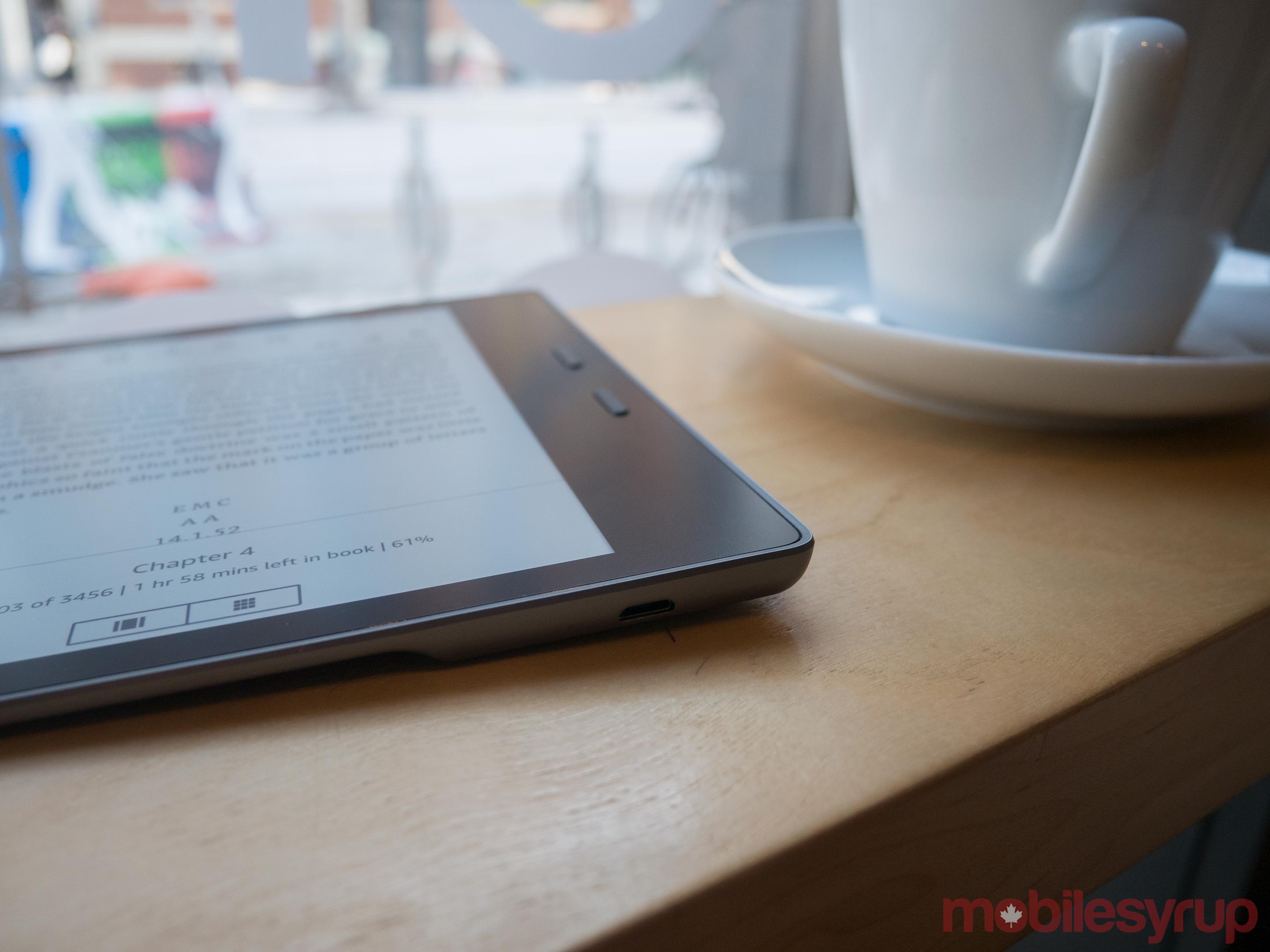 This year, Amazon’s top-end Kindle is also water-resistant, with an IPX8 rating (allowing for up to 60 minutes of submersion up to two metres in fresh water).

This rating is the same as the Kobo Aura One, taking away one of its major points of differentiation. Last year, I said the Kobo Aura One and the 2016 Kindle Oasis were perfect opposites. As it stands now, the 2017 Oasis has improved in the exact areas where Kobo’s Aura One had the edge, while honing the main selling points of its 2016 device.

Kobo does have a new limited edition Aura One e-reader for sale in the U.S. for $280 USD featuring 32GB of storage — but that may not be enough to combat the 2017 Oasis’ design and performance benefits. It’s also unclear whether it’ll come to Canada in the near future, with a Kobo spokesperson stating only that there is “possibility for additional markets.” 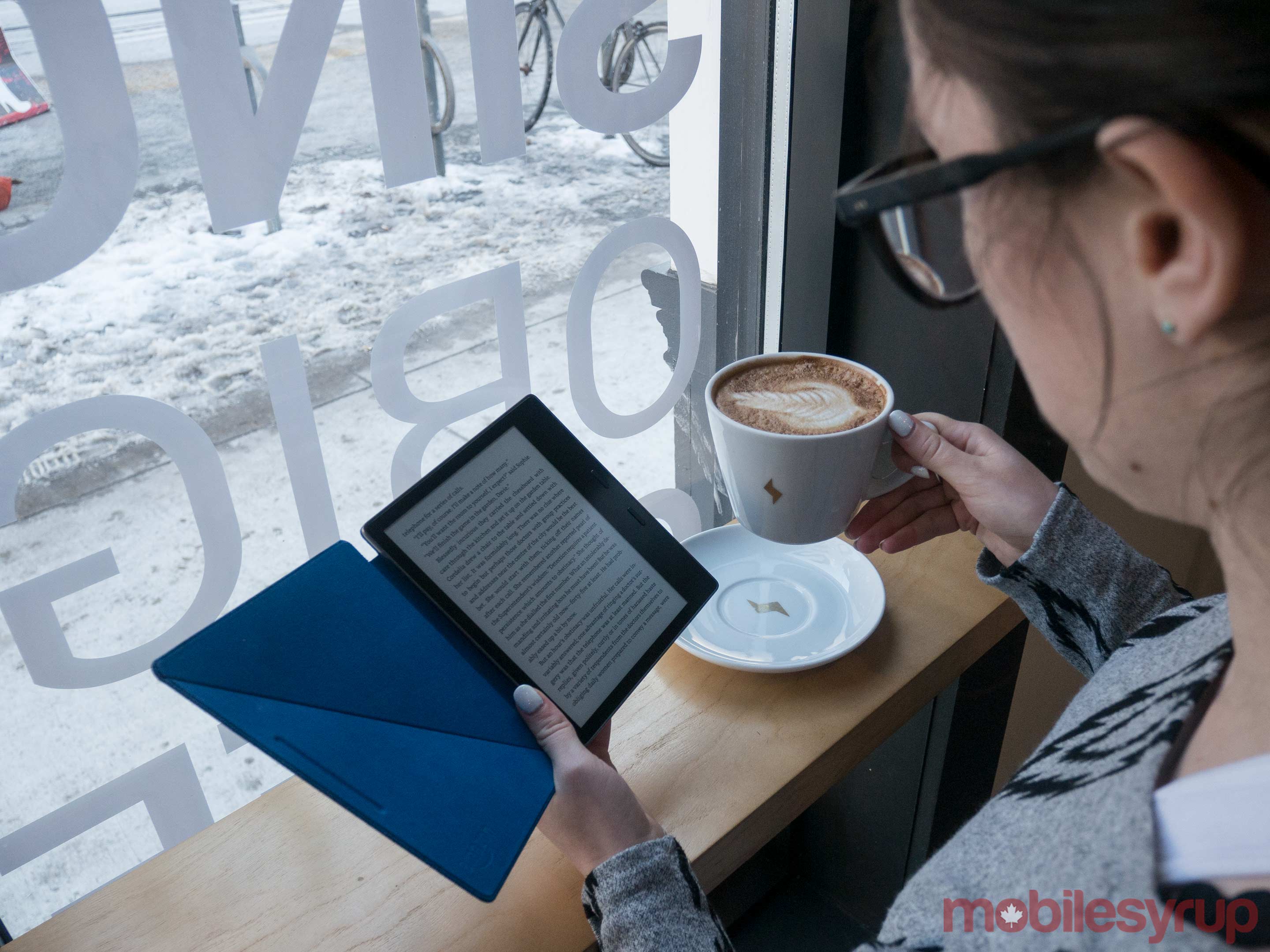 The 7-inch display on the 2017 Kindle Oasis is much larger than its predecessor, moving closer to Kobo’s form factor for the 7.8-inch Aura One, but not quite matching it. The Kobo Aura One is still far closer to displaying pages as they would appear in a real book, which I prefer as I’m used to that form factor and it gives me a better sense of the length of a book — something that’s often frustratingly hard to tell with e-readers.

However, with the smaller form factor comes a lighter weight. The new Oasis is 194g compared to the Aura One’s 230 grams. It’s much heavier than the 133g 2016 Oasis Kindle, though with its battery case the latter came to 240g.

The 2017 Oasis’ display features 12 LEDs and an adaptive light sensor, though I quickly became frustrated with its finicky nature, which tended to brighten and darken the display at the slightest change in surrounding light (for instance, when shifting slightly in bed). Auto brightness is easy to disable, however, allowing you to choose from a wide spectrum of brightness.

The display is crisp and defined, coming in with a pixel density of 300 pixels per inch (the same as its predecessor and the Kobo Aura One), and I didn’t spot any burn-in (i.e. ghostly apparitions of previous pages) during the time I used the device, which is not so with the Kobo Aura One.

Zippier performance than the Kobo Aura One 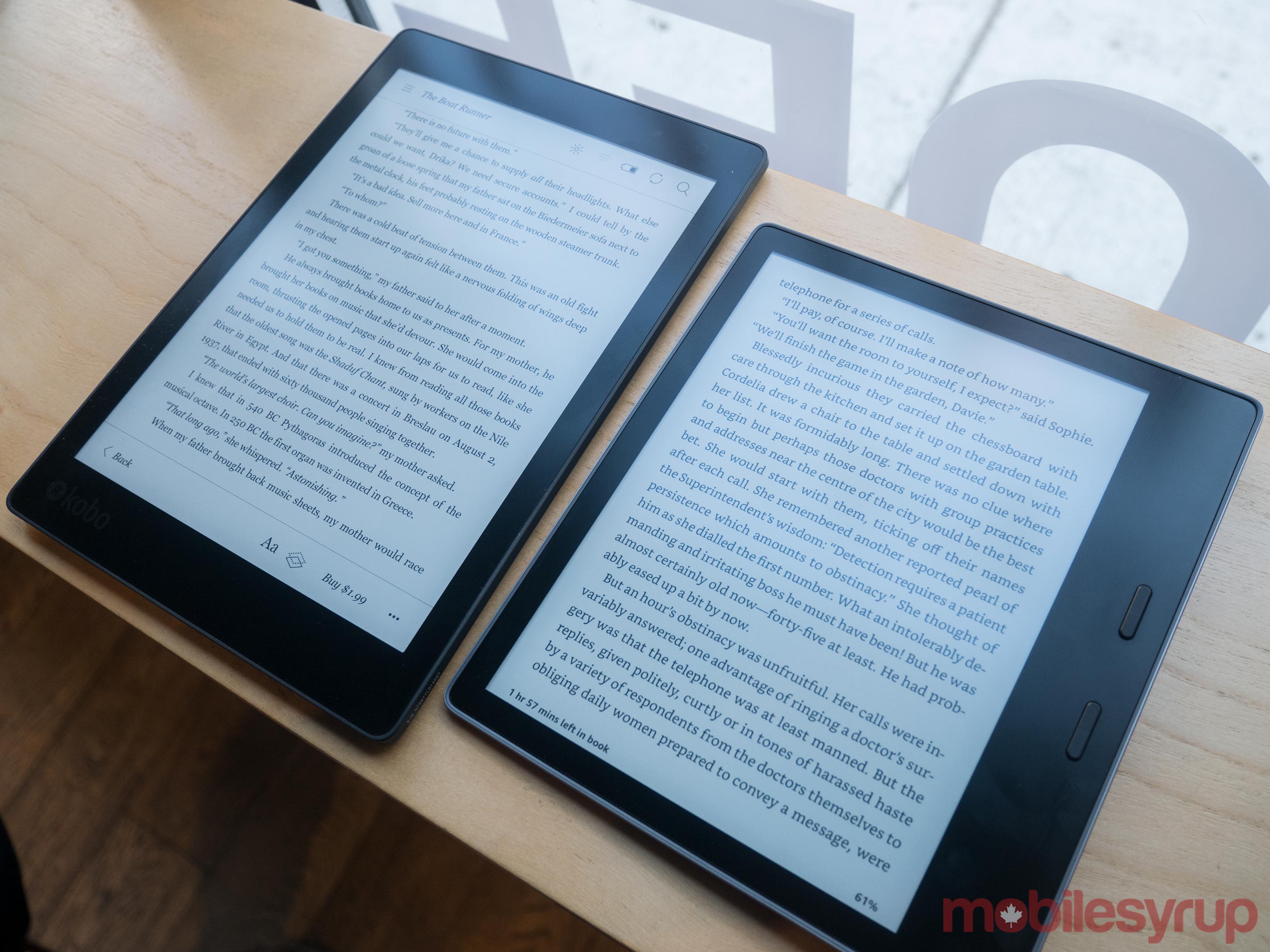 Above: The Kobo Aura One next to the 2017 Kindle Oasis.

As for performance, I found the device was consistently zippy and responsive, with very little lag, living up to the standards of its predecessor. In this respect the 2017 Oasis once again bested the Kobo Aura One, which sometimes responds so slowly as to confuse me into clicking twice.

One major point of differentiation between this year’s Kindle Oasis and the last is its battery, which, as I mentioned above, is much improved. Amazon is always fairly vague about its batteries, stating only that it should last “weeks” but where I found I was only able to get one or two out of the 2016 Kindle Oasis with on and off use, I’ve been able to draw out the battery for a good four or five weeks with the 2017 Oasis.

In terms of storage, the 2017 Oasis comes in 8GB or 32GB variants, the latter of which is likely overkill, considering 8GB of storage allows for the storage of about 6,000 e-books — still, the extra space is nice to have. 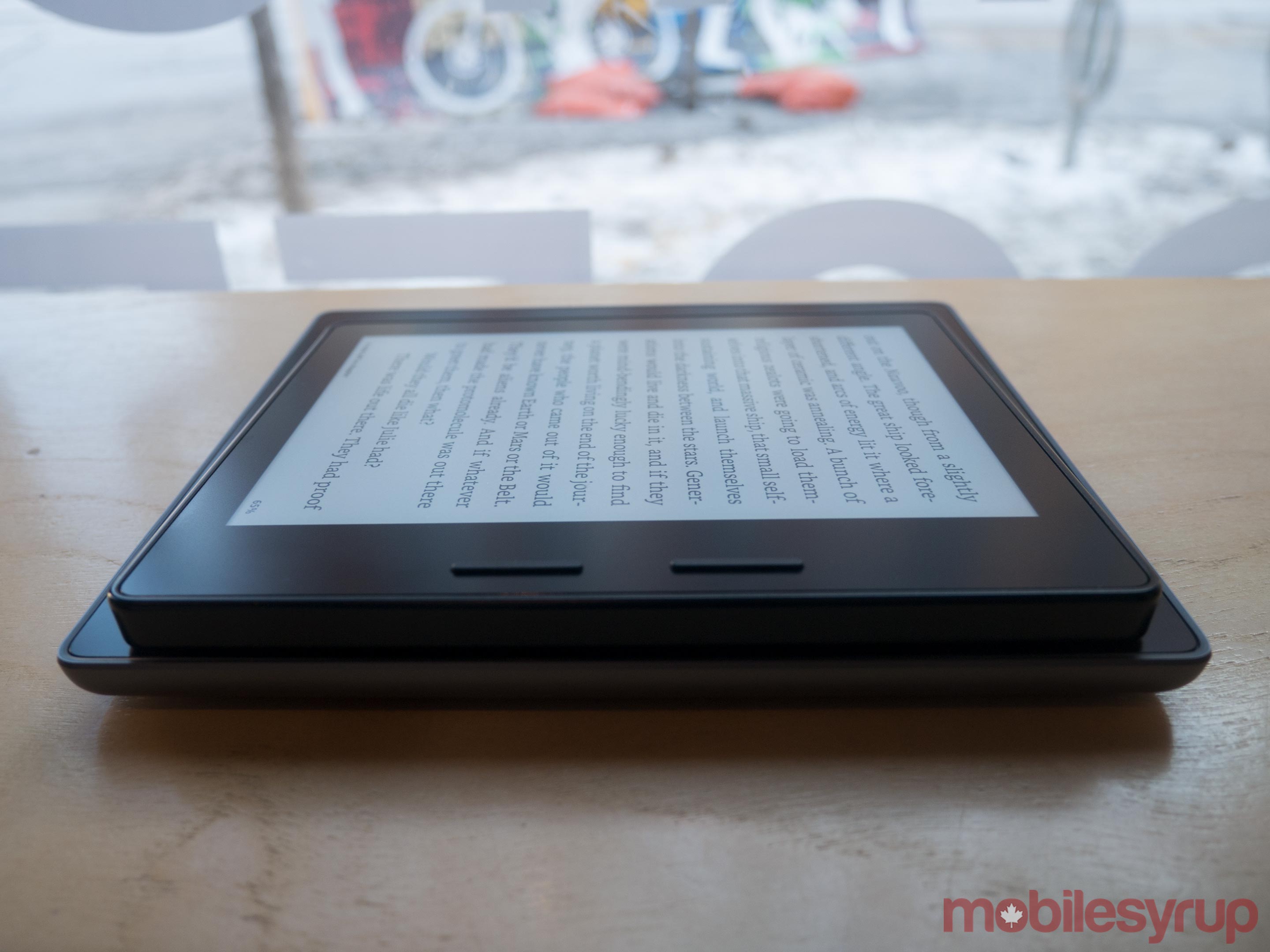 I always enjoy the simplicity and ease-of-use of the software experience on Kindle devices, as well as the close integration with GoodReads, the social network and public review platform for readers, and my experience with the 2017 Oasis was no different.

There is, however, always the question of Amazon’s walled garden when it comes to file formats versus Kobo’s much more open approach (discussed at more length here). For many, this is a deciding issue when it comes to purchasing a Kobo over a Kindle — which is fair, since an e-reader is only as good as the content it holds.

However, if purchasing books through Amazon’s own store isn’t a major issue for you (or finding workarounds), Kindle’s latest hardware outstrips Kobo’s handily.

As always, the latest Kindle flagship comes with either Wi-Fi capability or Wi-Fi plus Whispernet free cellular connectivity — useful for purchasing and downloading books on the go, and something for which Kobo has no equivalent. 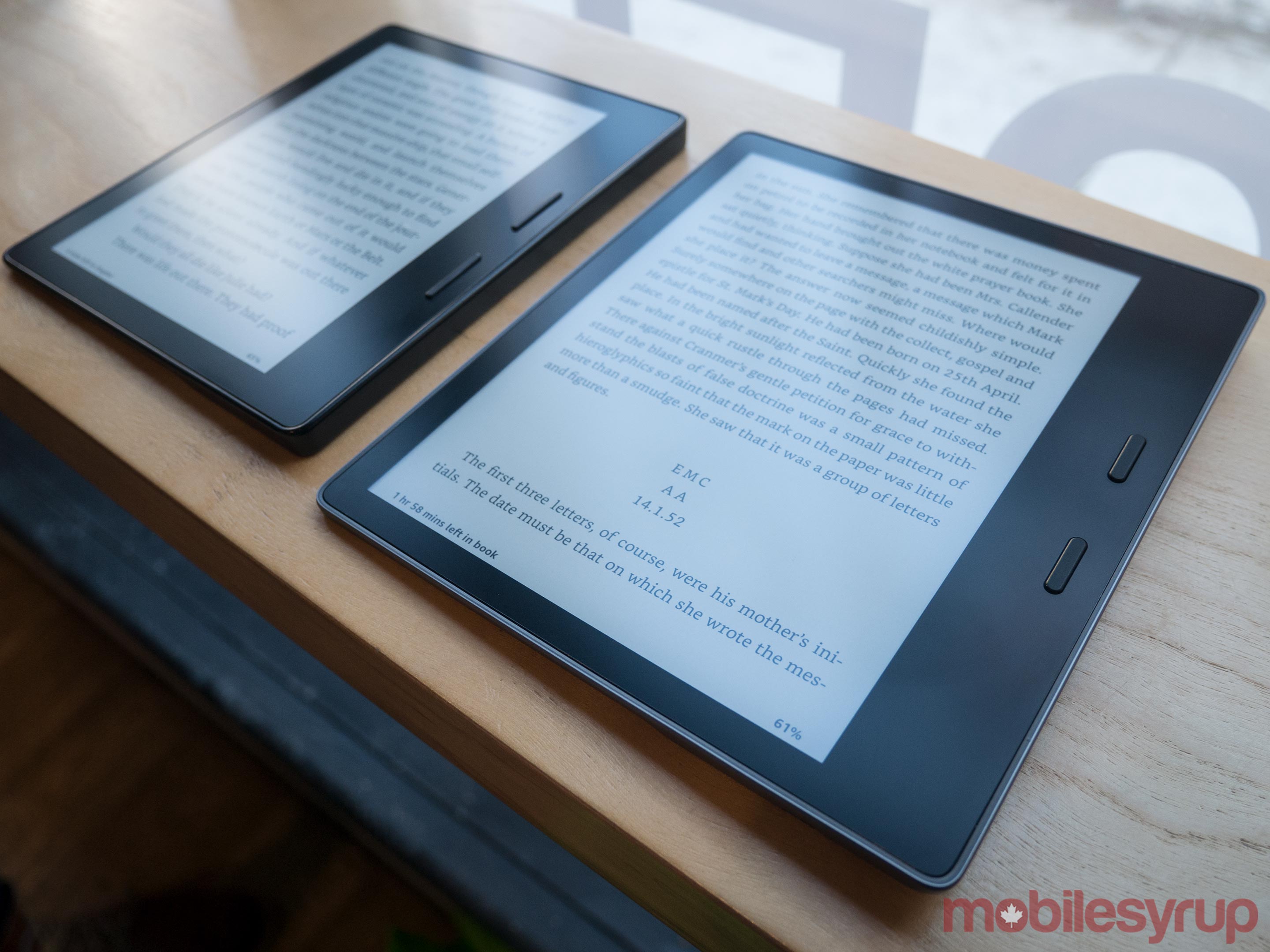 I wasn’t expecting to be as impressed by the 2017 Kindle Oasis as I was. Last year, I enjoyed using the Kindle Oasis, but ultimately felt Kobo’s Aura One was more durable and functional for a much lower price.

This year, the Oasis is still far more expensive than the Kobo Aura One, but has taken for its own some of the best aspects of the Aura One. Meanwhile, Kobo has yet to release a new premium e-reader in Canada (though, as noted above, there’s the new limited edition Aura One in the U.S.), leaving it a much less exciting prospect next to the sleek 2017 Oasis.

Once again, Kindle has managed to create the Rolls Royce of e-readers. Whether it’s worth the price tag is ultimately a personal choice but one thing I can attest: it’s the best e-reading experience I’ve had to date.