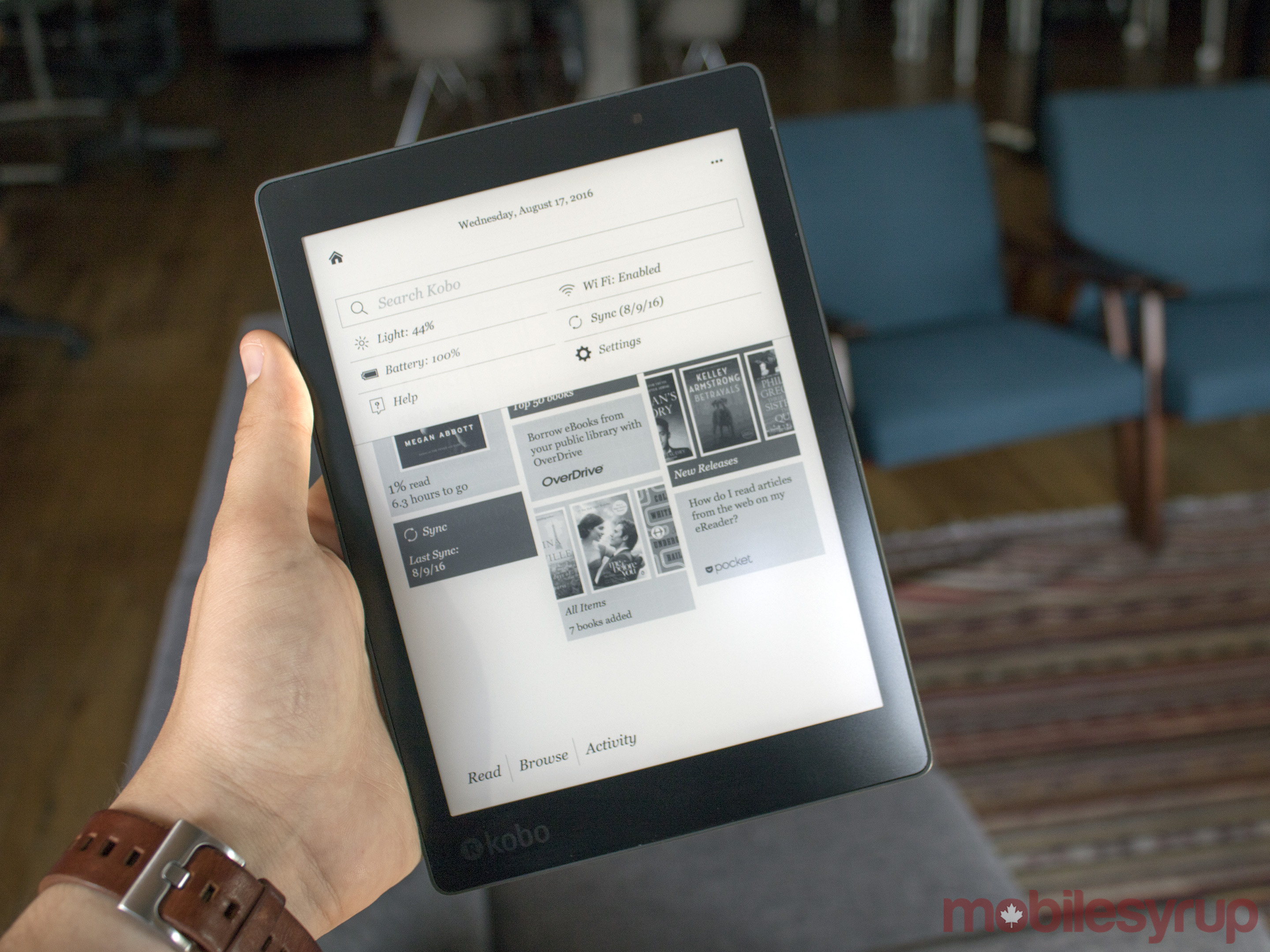 After a major specs leak and a photo teaser tweeted by CEO Michael Tamblyn himself, Rakuten Kobo has announced the Kobo Aura One, a giant ‘book-size’ premium e-reader priced at $250 with new features including a waterproof IPX8 rating and auto blue light reduction for evening use.

The Wi-Fi-only device touts two unique features, the first being that at 7.8-inches, the Aura One has the largest premium e-ink display currently on the market, resulting in fewer page turns and a more ‘book-like’ feel. Kobo has also managed to keep its display quality on the larger canvas with a 300 ppi density, the same as the Kindle Oasis, Voyage and Paperwhite.

Additionally, and somewhat surprisingly, the Aura One is Kobo’s thinnest device yet at 6.9 mm, though its size has resulted in a somewhat chunky 230 grams, significantly more than the Oasis’ 131 grams, or the Voyage’s 180 grams — though still less than an average paperback. 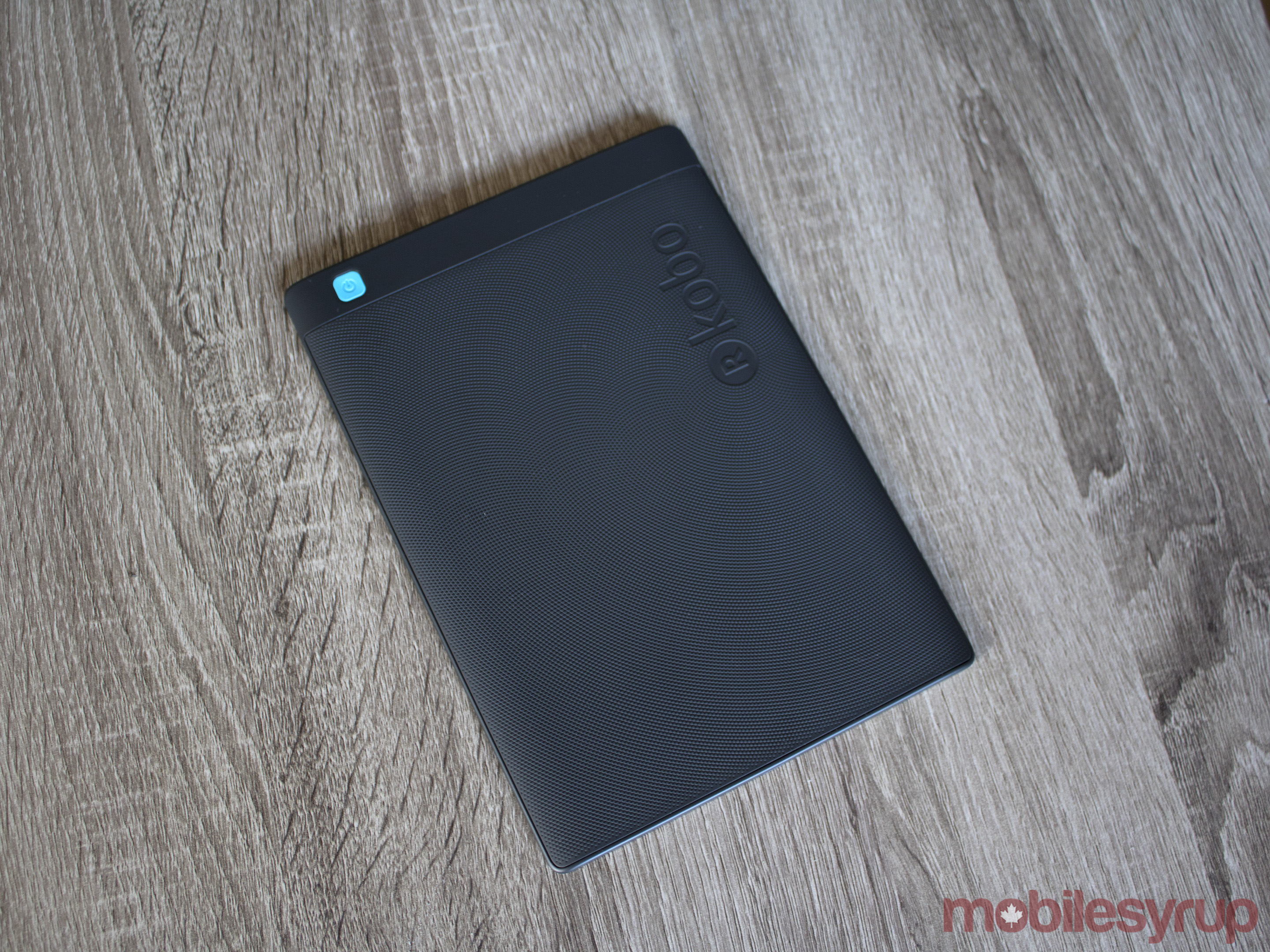 The second unique element is its blue-light reducing front-lit display, which Kobo states is the first of its kind. This feature was created based on research that shows using tech that emits blue light before bed affects sleep quality due to its activating effects.

“We worked with sleep researchers at Ryerson University to figure out what the right light spectrum profile is that they should be seeing at the end of the day,” said CEO Michael Tamblyn in an interview with MobileSyrup, “We wanted to make sure the device that you’re bringing to bed isn’t knocking off your sleep.”

As for how it specifically works, Colleen Carney, associate professor and director of the Sleep and Depression Laboratory at Ryerson explains, “We require red spectrum light to stimulate melatonin, a hormone that regulates our body clock. This device pays attention to the timing of blue and red spectrum light to protect sleep quality.” 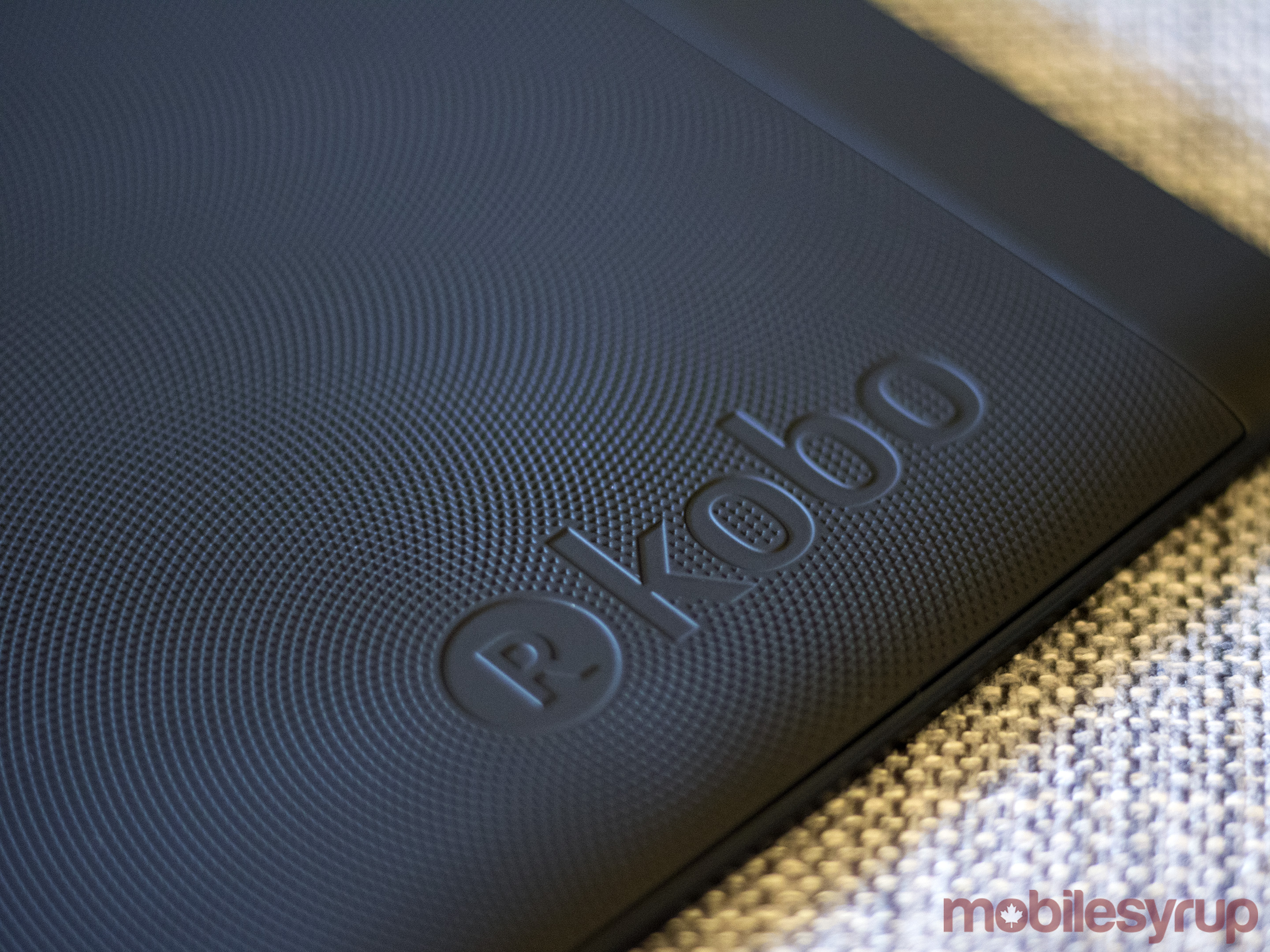 In other words, as day transitions into night, so the Kobo Aura One’s screen transitions from blue spectrum light to red spectrum light. If this sounds more annoying than helpful, however, it can be disabled and set to one’s own preference.

Another intriguing aspect of the Aura One is its advancements in waterproofing, which the company says has extended past what was achieved with the Kobo Aura H2O.

“We’ve developed an entirely new method for water-proofing which includes a nano-coating of the internals of the device so we don’t need waterproof seals of the ports anymore,” says Tamblyn.

Thanks to the new process, the Aura is IPX8 certified, which means it’s safe in up to 2 meters of water for up to 60 minutes. 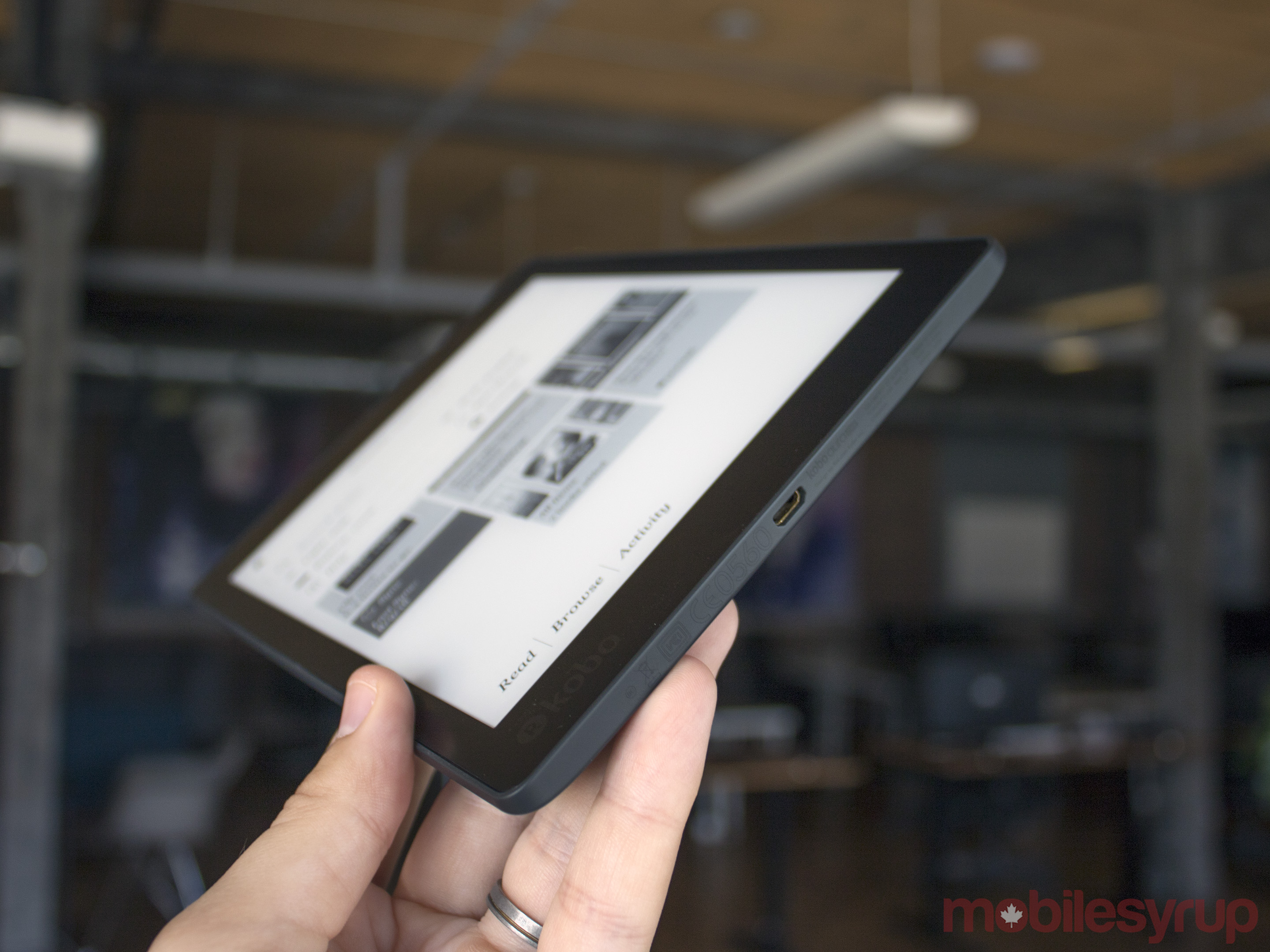 As for internals, the e-reader contains 8GB of storage — standard for the product type — which translates to a storage capacity of up to 6,000 books. It runs on 512MB of RAM, and is powered by a Solo Lite iMX6 1GHz processor from NXP.

The device contrasts starkly with Amazon’s Kindle Oasis in almost every way. Released in Spring 2016, the Oasis shrunk in size significantly from its predecessors and delivered an innovative and fashionable form for a shocking $400 base price. It was reviewed by many tech journalists (including myself) as the e-reader you want, but don’t need. In comparison, it appears Kobo’s aim was to build a practical device at such a reasonable price there’d be very little reason not to get it.

As would be expected with a strategy so different from his company’s, Tamblyn seemed confused by Amazon’s premium, design-focused tactic.

“It’s hard to justify that kind of price point when screen dimensions aren’t changing, when waterproofing isn’t in the mix, when they haven’t offered light dimming. But it looks good for us.” 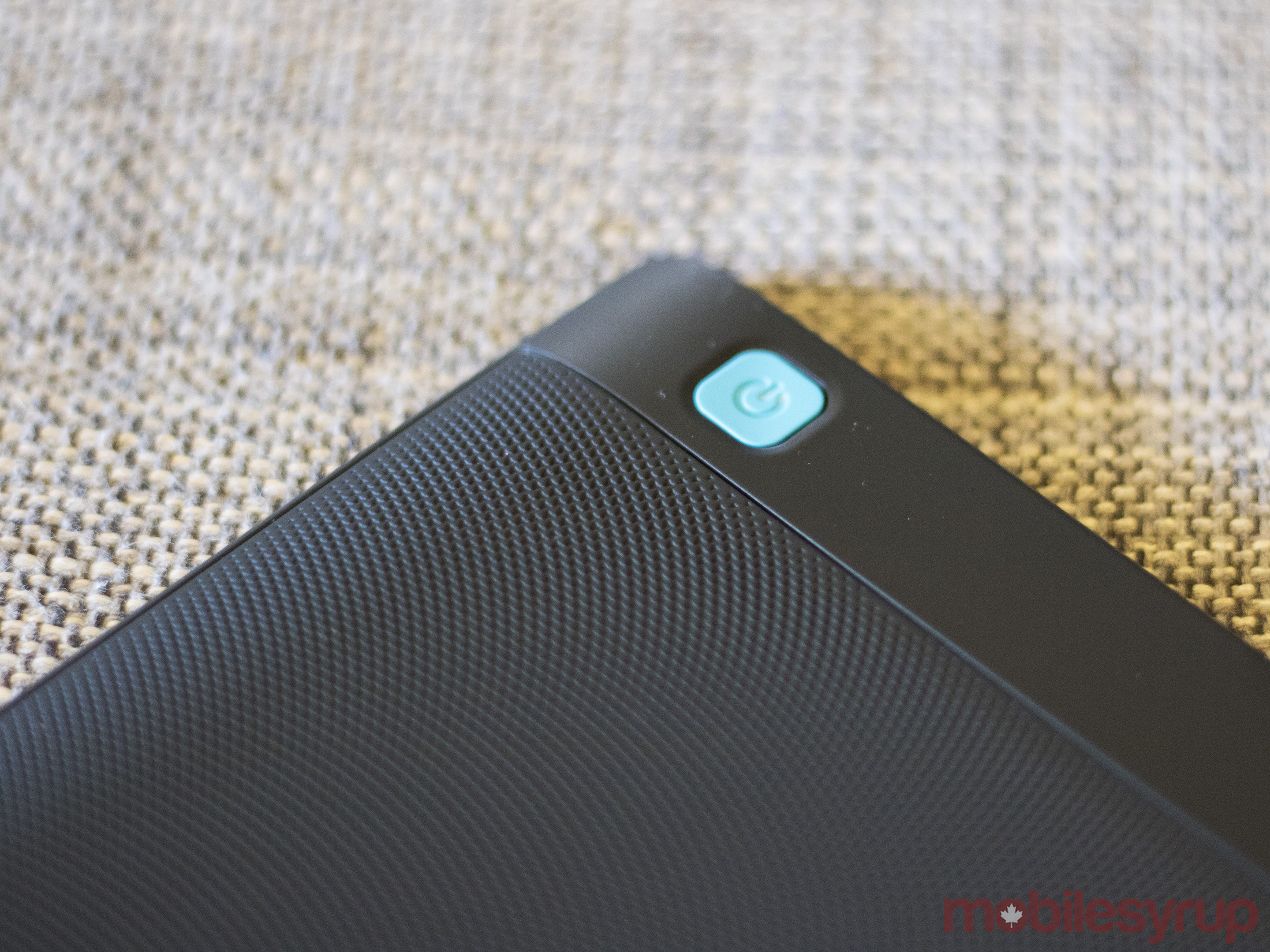 “It’s much more than competing with other retailers, we’re in a fight for time,” explains Tamblyn, “Instead of streaming video or checking social media, we want to keep you reading.”

The new device, which comes in soft black only, will be available in Canada exclusively at Kobo.com at Indigo in-store and online from August 30th to September 29th, after which time it will also be available at Best Buy.

Along with the announcement of the Aura One, Kobo also debuted a refresh of the Kobo Aura. The Kobo Aura Edition 2 features a six-inch 212 ppi screen, 4GB internal memory and battery life of “up to months.” It’s available at $129.99—down from the Glo HD’s $139.99– in black starting September 6th.

Related reading: Kindle Oasis review: The best e-reader is not worth the price of a high-end tablet

J.D. Salinger’s books finally to be published in e-book versions