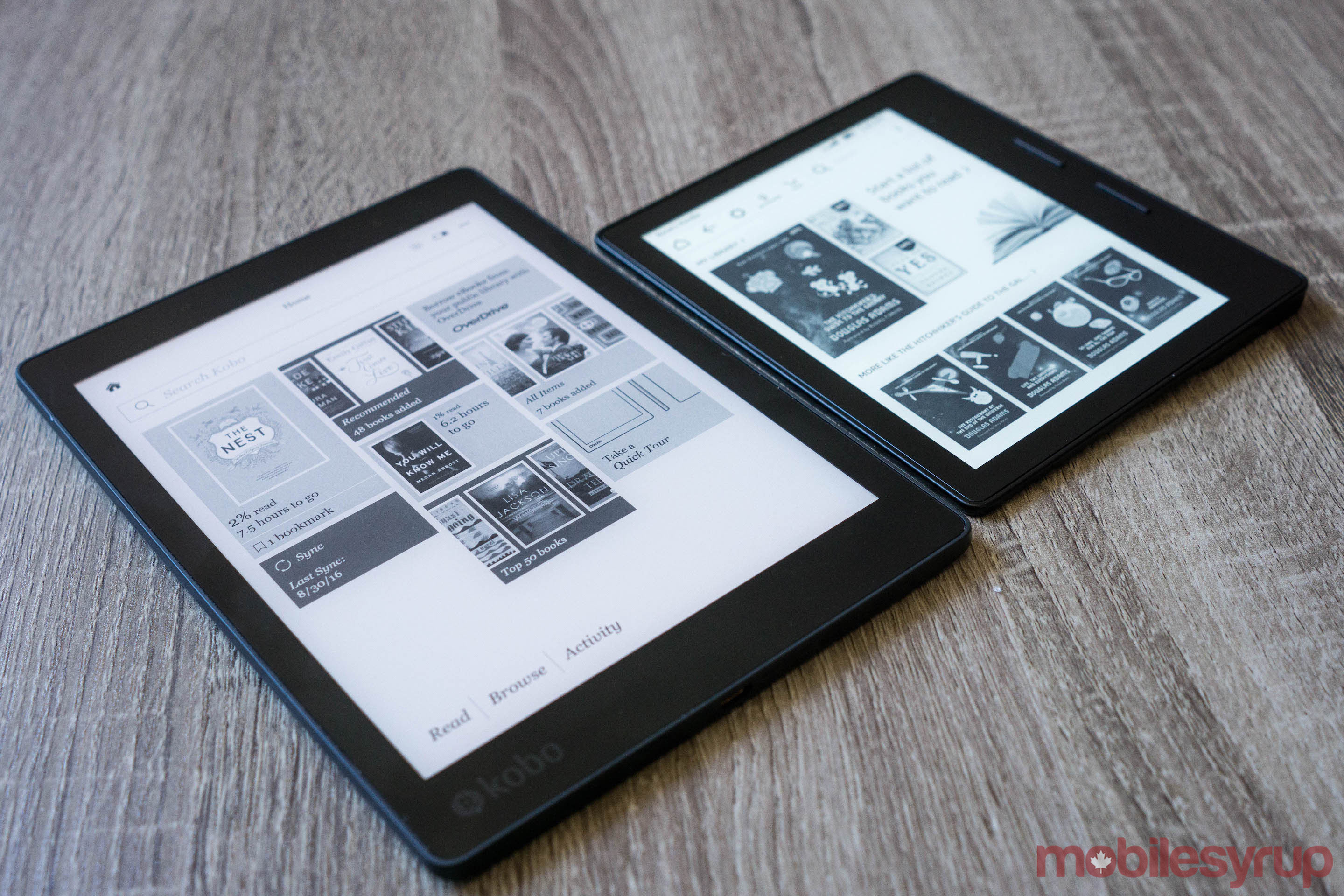 In almost every way that matters, Kobo and Kindle’s latest premium e-reader offerings stand in stark contrast to each other. 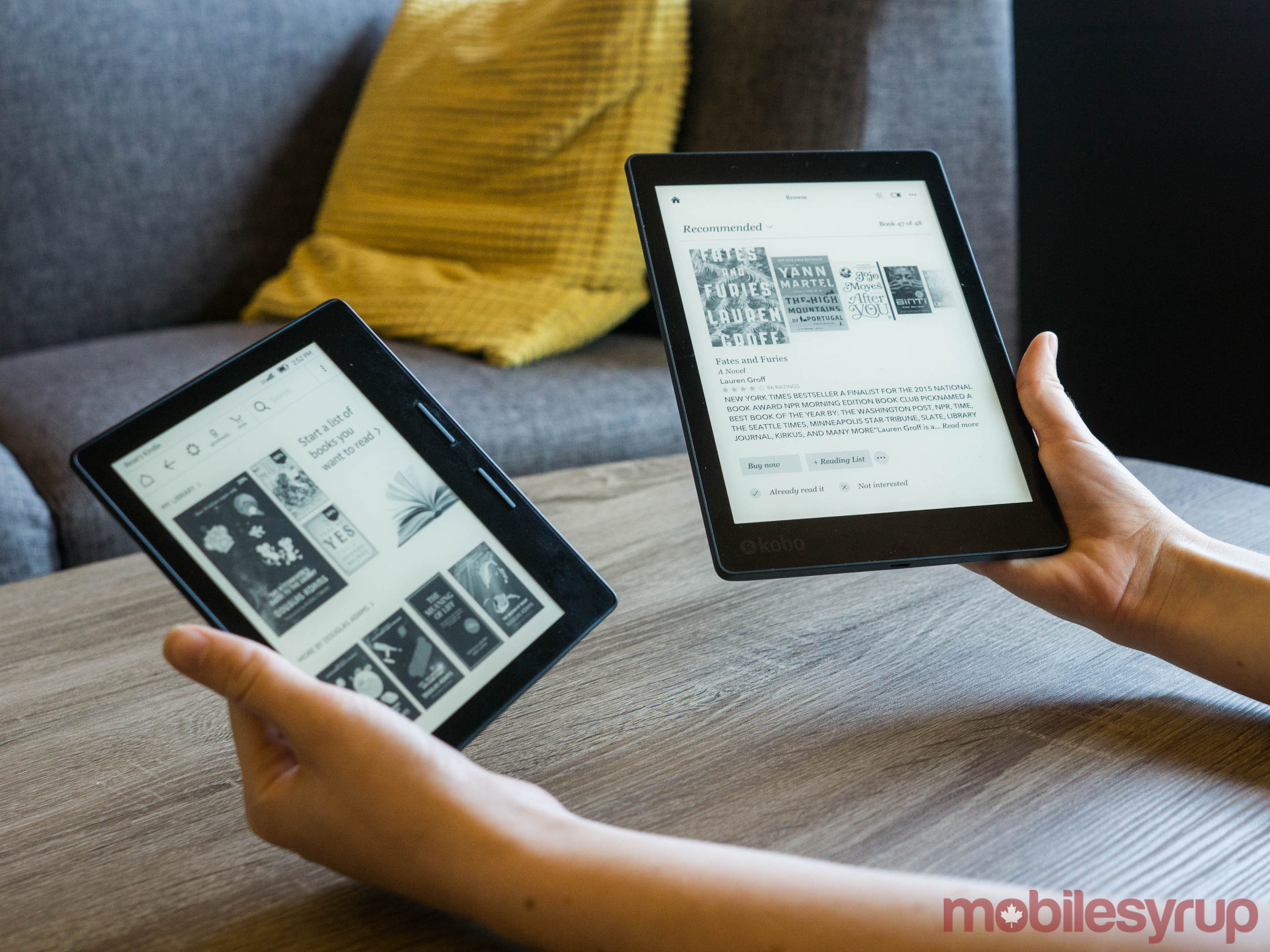 The most immediately striking difference between these two e-readers is visual. Where the Kindle Oasis made an effort to be the thinnest, smallest device available, the Kobo Aura One went the opposite route and debuted the only 7.8-inch premium E-Ink display on the market, apparently at the behest of its customer testing group.

Kobo says the group was asking for a device that would show more words per page — like a real book. Because of that, the e-reader is sized at 195.1 x 138.5 x 6.9 mm and weighs in at a bulky 230 grams. By specs alone, I was initially unsure my small-handed self would enjoy the Aura One, but was pleasantly surprised to find that it feels much lighter than it is on paper.

Additionally, I really enjoyed the fact that the display was more ‘book-like’ with much more words per page than the competition. I had never before identified this as an issue with e-reading, but now that I’ve experienced the luxury of less page turns, I’d prefer not to go back to pressing the screen every two paragraphs, as I’m compelled to on the Oasis. 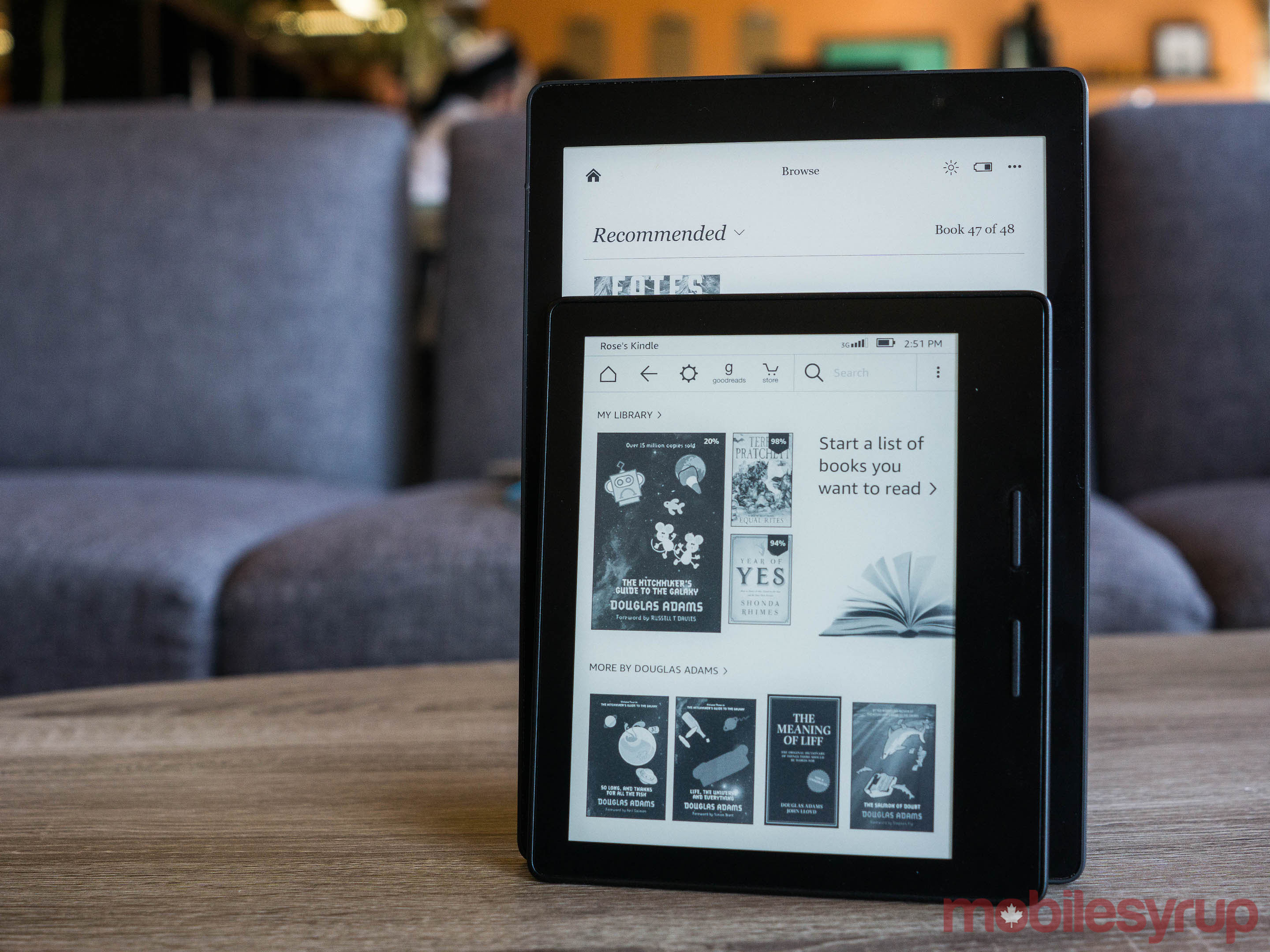 However, the Oasis, with its focus on premium design, features a much better mechanism for page turning. Rather than fumbling with a touch screen, you’re able to click forward and back with two slim buttons set intuitively by your thumb that work for either left or right-handed users with a simple flip of the device. The Aura One is touch-only.

It also doesn’t have any equivalent to the Oasis’ flashy leather second-battery case, which clips on magnetically, protecting the front of the screen. From a purely aesthetic standpoint, the Oasis’ case and overall appearance is a major draw for the expensive device — as I noted in my previous review, it’s the e-reader equivalent of pulling up to work in a ’69 Mustang.

That being said, the Kobo Aura One is no slouch either. It’s textured back, which features expanding circles of dots (consider yourself warned, trypophobes), brings to mind the raked sand of a zen garden, and its little blue button is a cute accent. 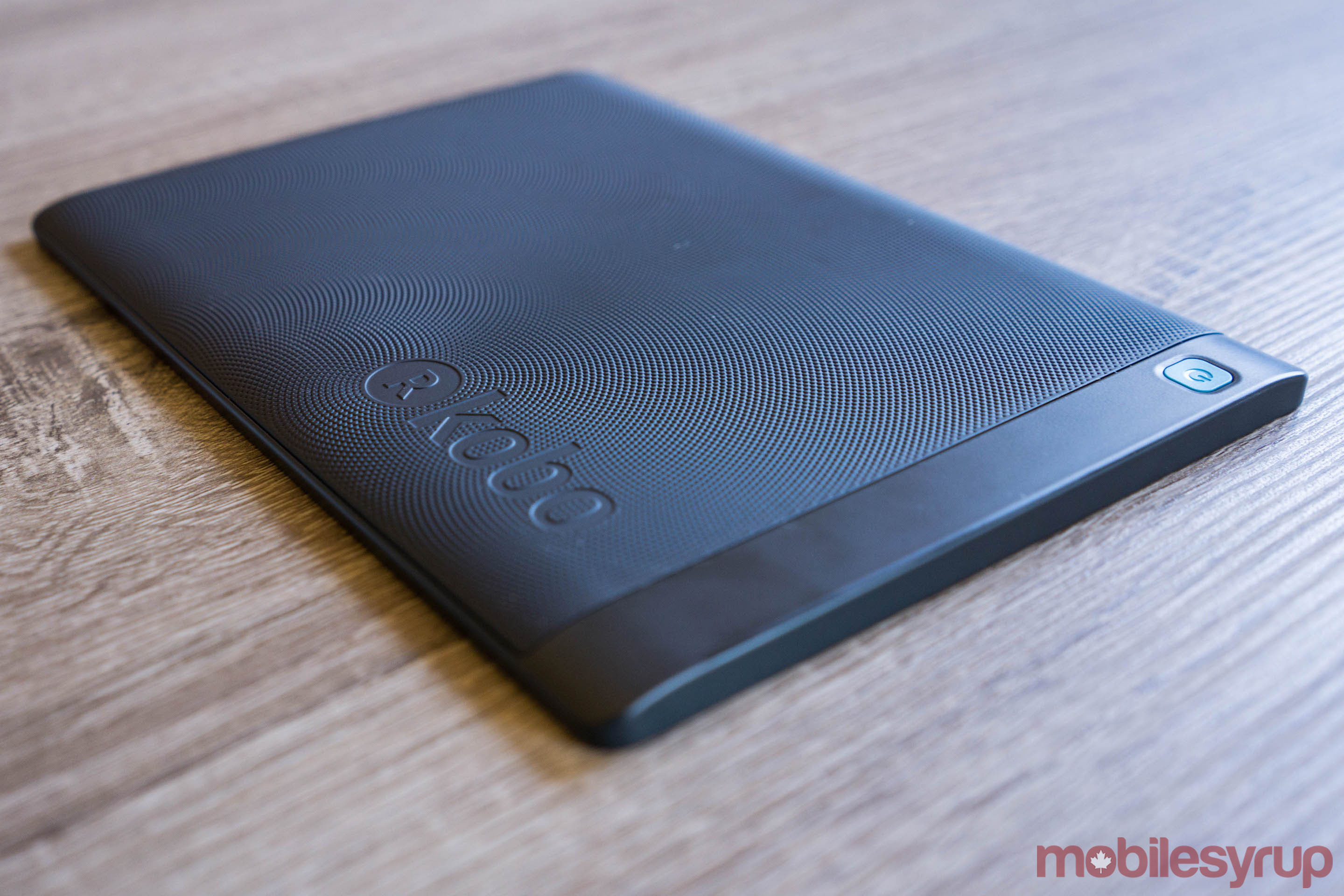 On paper, the Oasis should be lighter, but considering you’re most likely to use the Wi-Fi plus 3G version decked out with the included case, it actually sits at 240 grams most of the time, 10 grams over the Aura One. Without the case, however, it’s 99 grams lighter than the Aura One.

As for size, the Aura One’s bulk didn’t bother me, especially considering its slimness, and that went even more so for those with larger hands. While the Oasis sans case definitely feels better, I’m willing to sacrifice that for a better display size on my eyes. 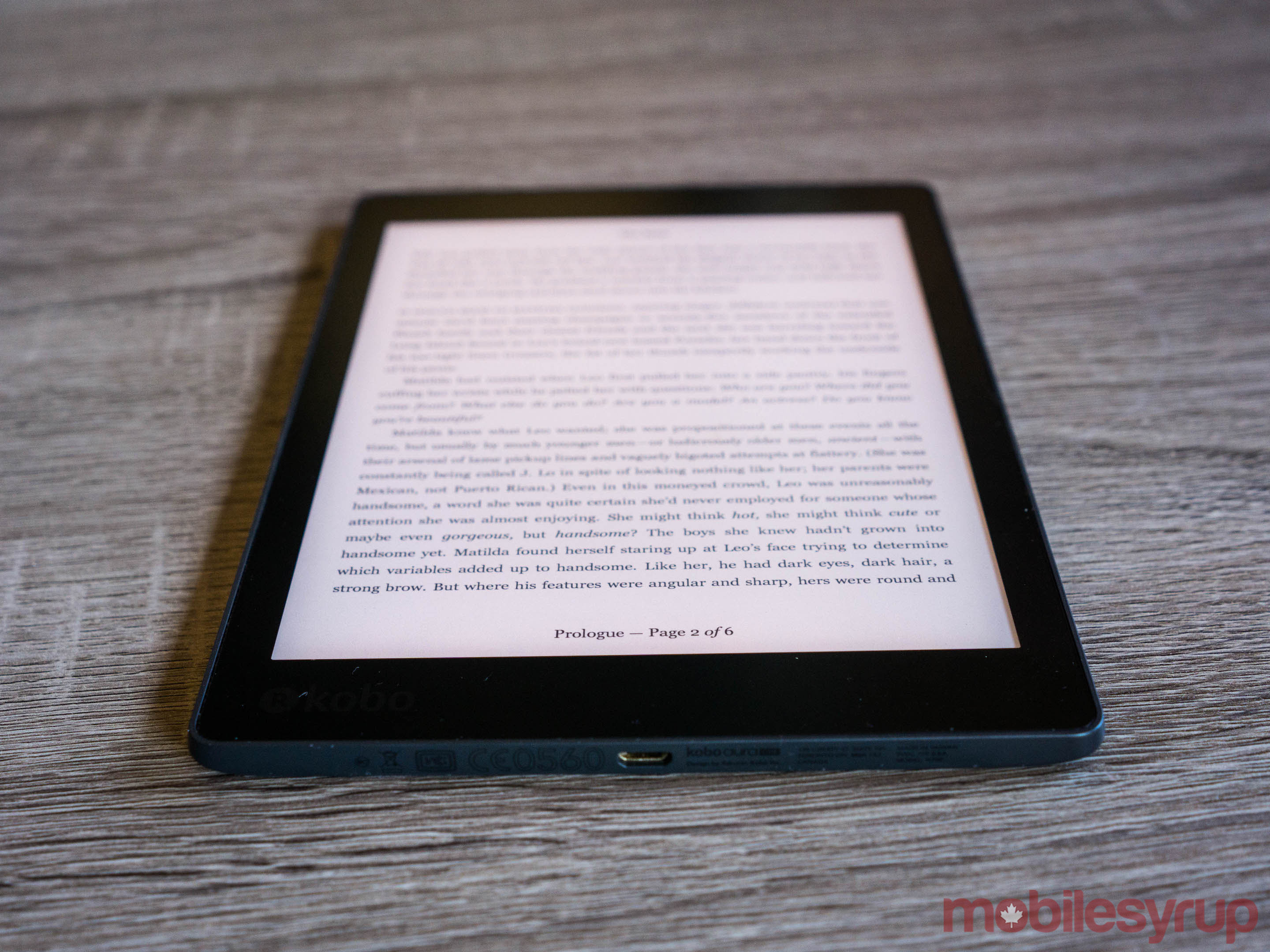 One of the most touted elements of the Aura One is the automatic blue-light reduction feature built in to its display. The idea behind it is interesting — sleep researchers say that viewing devices with blue light right before bed ‘activates’ you and affects your ability to get to sleep.

In practice, however, I only know of one particularly light sleeper in my life that is bothered by this issue, and the red spectrum light that the device substitutes in takes a while to get used to. Still, it adds value to a certain demographic, however small, and can be manually turned off if it bothers you.

Other than that, the two displays are very similar in quality. Both feature a Carta E Ink touchscreen with 300 ppi resolution, and both looked crisp and defined. 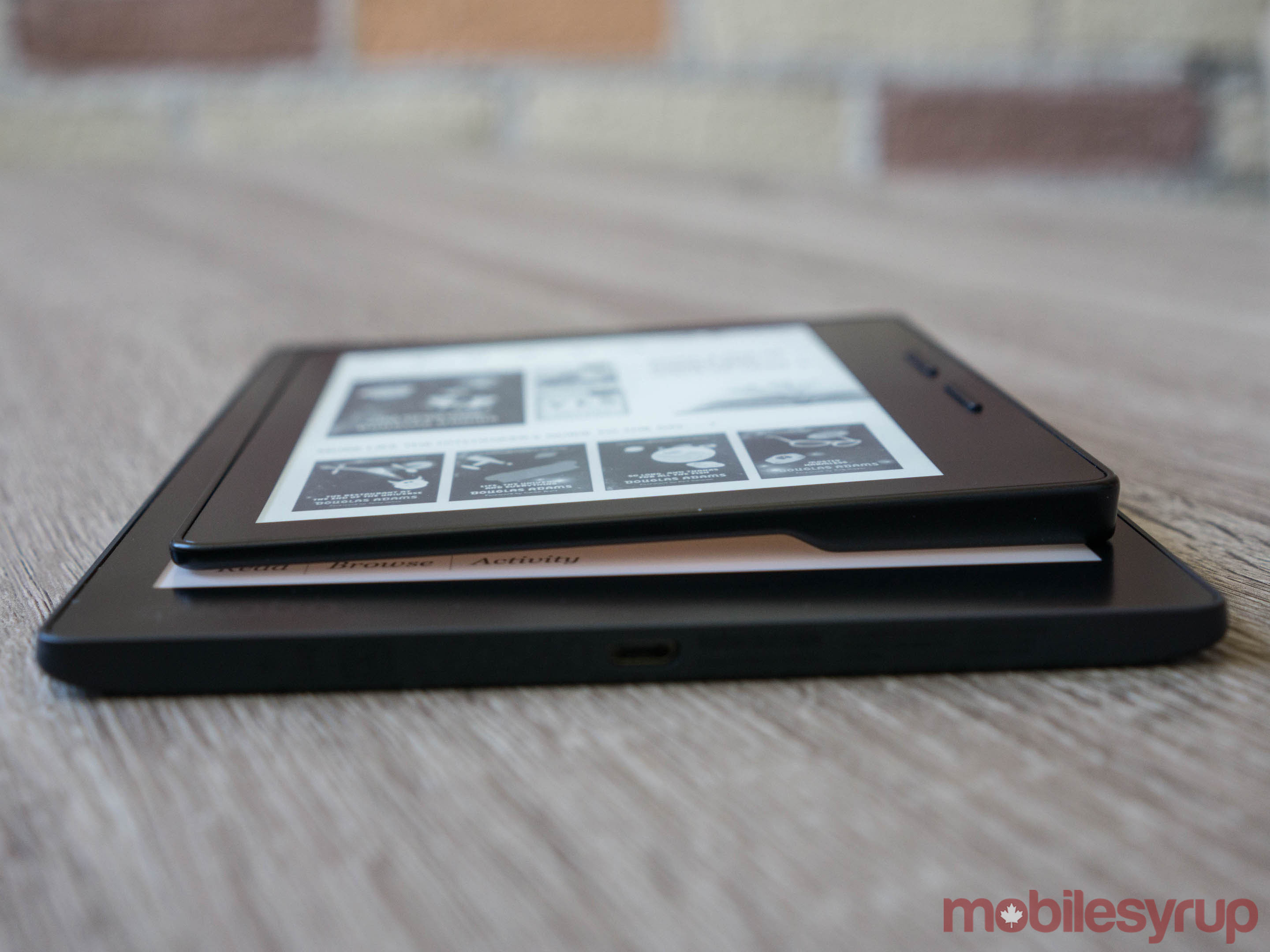 Under the hood, Amazon told us only that the Oasis features 1GHz CPU and 4GB of storage, while Rakuten Kobo provided slightly more information, stating that the Aura one has a Solo Lite iMX6 1GHz processor from NXP with 512MB of RAM and 8GB of storage. Both configurations led to a decent performance speed, with negligible difference between the two.

In terms of touch-screen performance, however, I found that the Aura One’s screen was a little less responsive than I would’ve liked, particularly around the edges. I didn’t have this issue with the Oasis, but then again, I mainly used its tactile buttons. 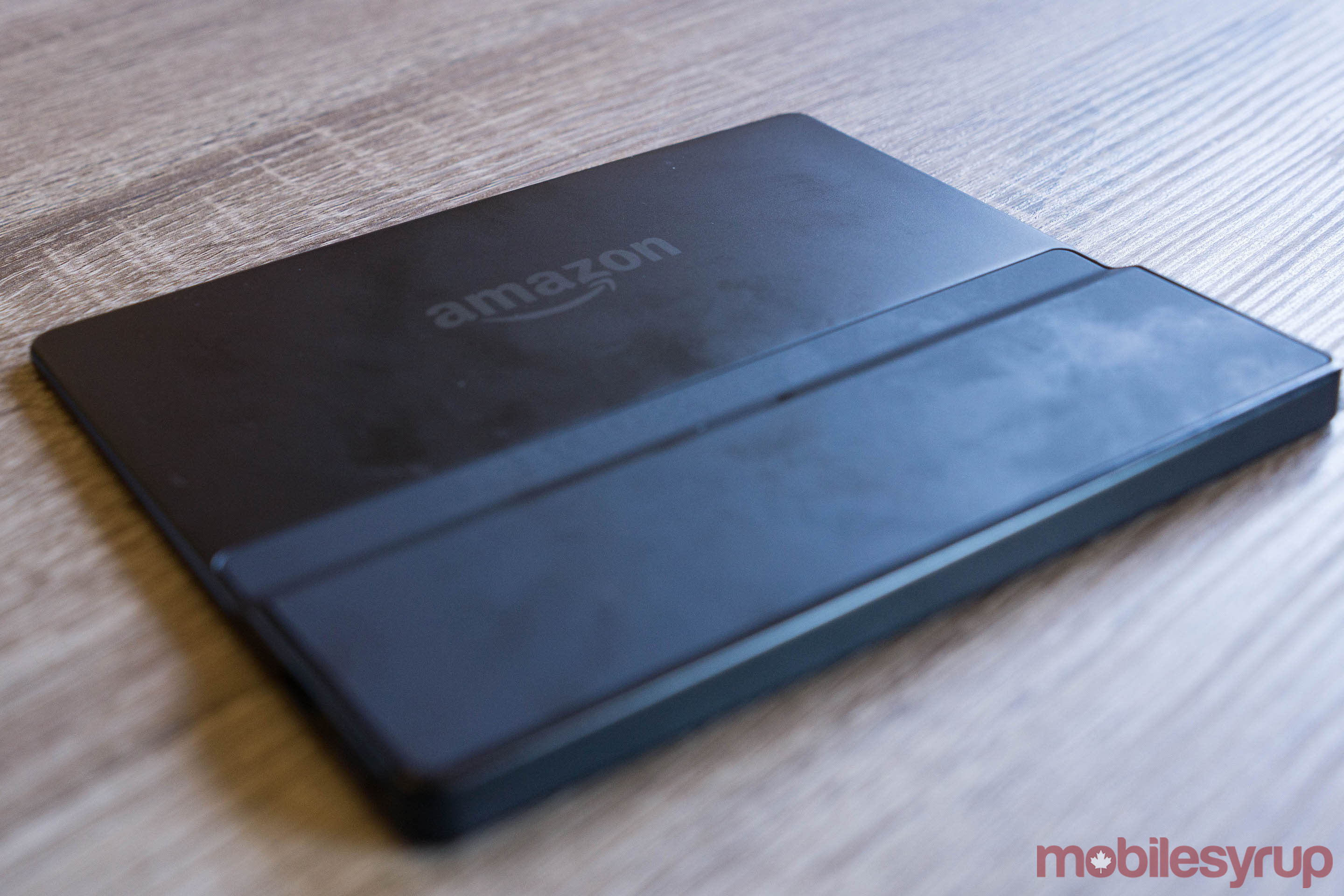 It’s hard to fairly judge the two devices across this metric, as I didn’t have the Aura One for multiple charge cycles as I did for the Oasis. It promises a one-month battery life, and I will note that it seemed to be on course to meet that target during my three weeks with the device.

As for the Oasis, its battery life was one of it’s biggest marketing points, promising up to eight weeks due to the addition of its second battery. Unfortunately, it fell far short in my experience. After a full-charge, the device would last just two weeks. For reference, I was using the device for about two hours daily at mid-level brightness with Wi-Fi and 3G on. With those same settings for my Kindle Paperwhite, I was able to get approximately a full month out of the device.

After asking Amazon about the issue, they recommended I turn off Wi-Fi and turn down the brightness on the Oasis, but didn’t offer an explanation. 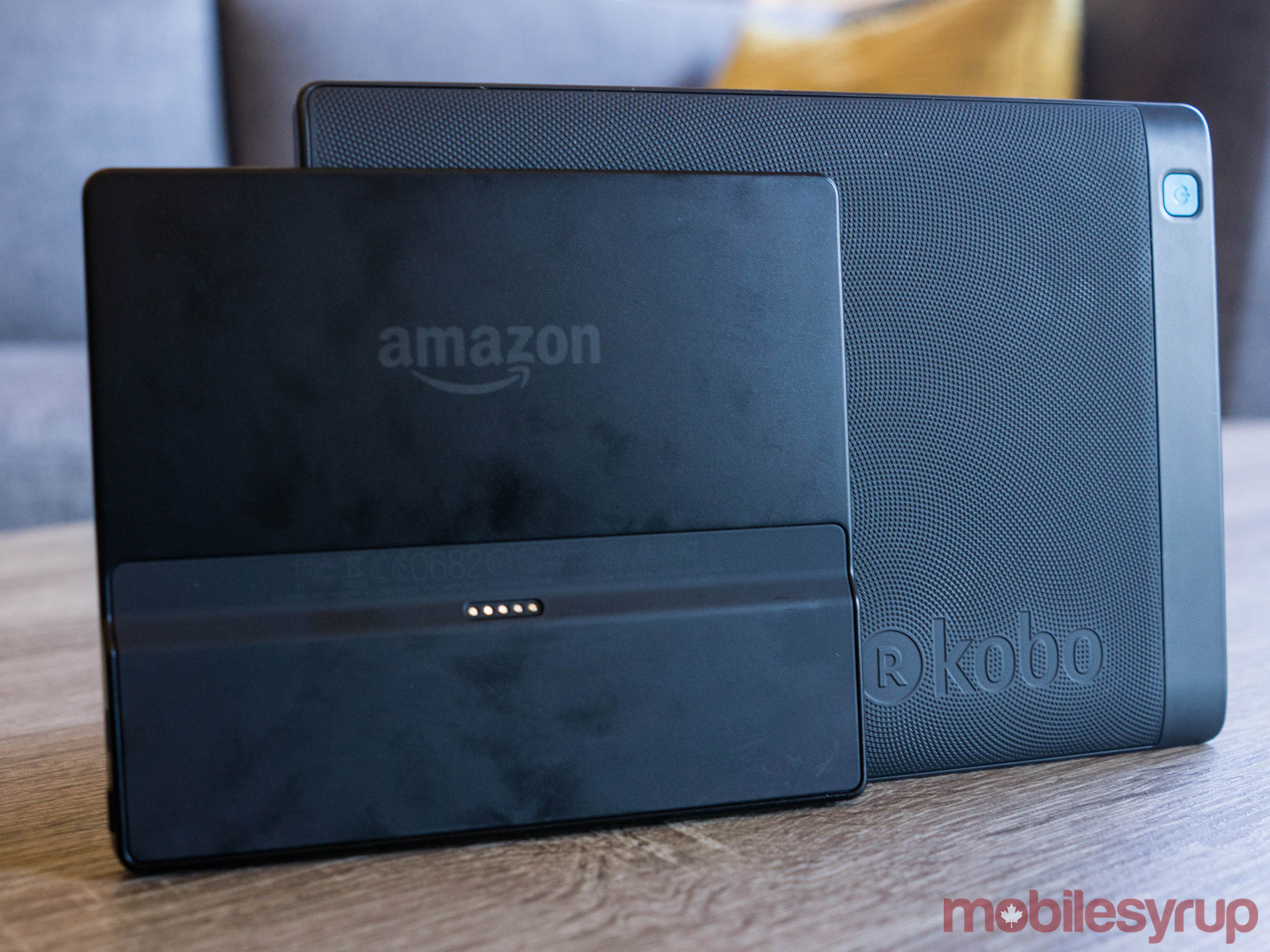 Despite being called the Oasis, Kindle’s most recent premium e-reader is not waterproof, while Kobo’s Aura One is IPX8 certified, meaning it’s safe in up to two meters of water for up to 60 minutes, a feat achieved by nano-coating the internals of the device to allow for open ports.

A pro for the Oasis, however, is that it comes with its screen-protecting case, which the Auara One does not. One of its branded SleepCovers will run you $49.99. 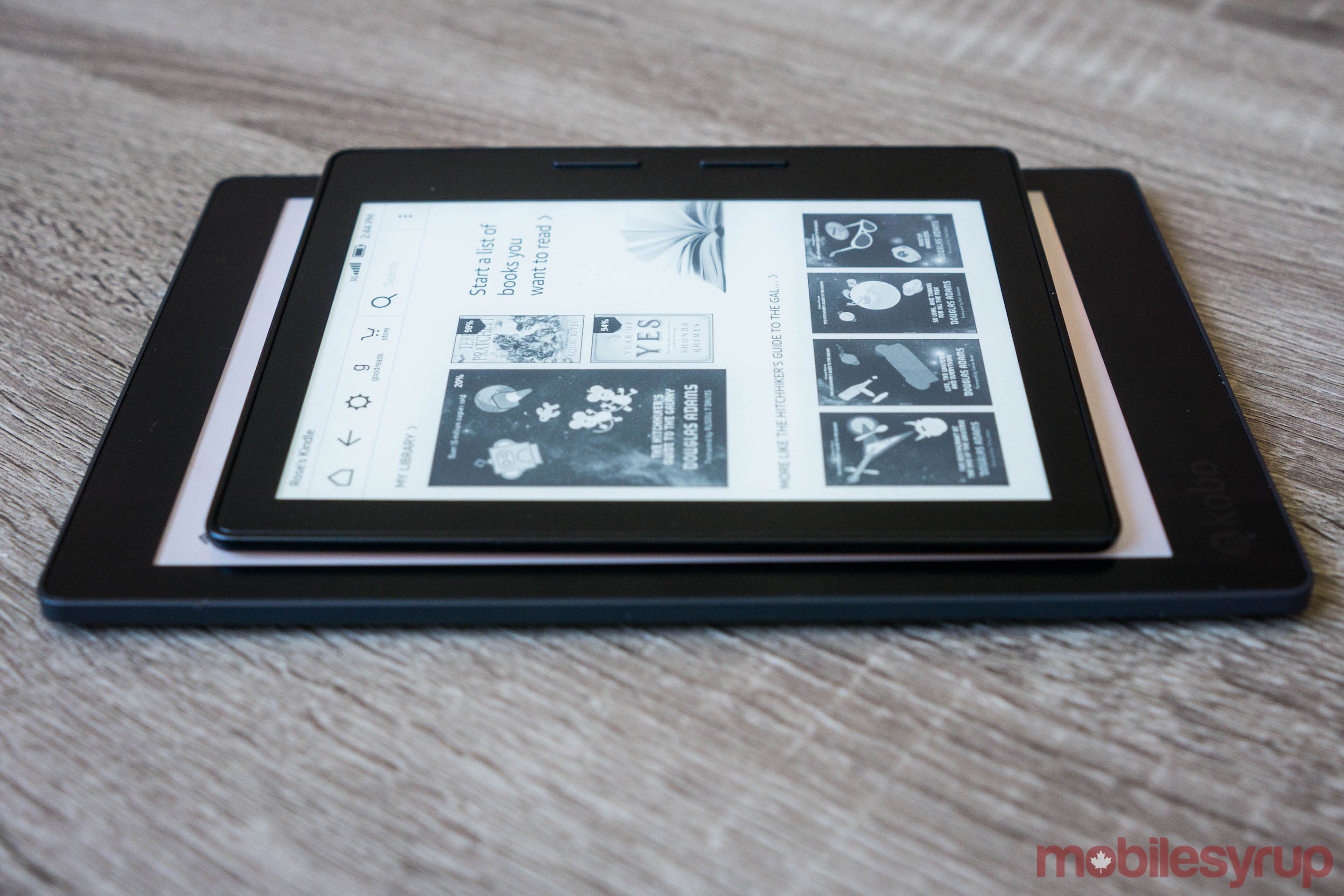 For many, however, the debate between the Aura One and the Kindle Oasis will come down to the devices’ respective prices: $249.99 CAD for the Aura One, and $499.99 CAD for the Oasis (Wi-Fi-only version is $399.99). Impressively, Amazon’s device is over double the price of the Aura One, which itself is regarded by some as itself being overpriced.

However, the numbers so far for the Aura One seem to show that $230 is the sweet spot for a premium device, with stock shortages affecting the company throughout September due to unexpectedly high demand. While no numbers have been released concerning the Oasis when it comes to shipments, there don’t seem to have been any such significant shortages. 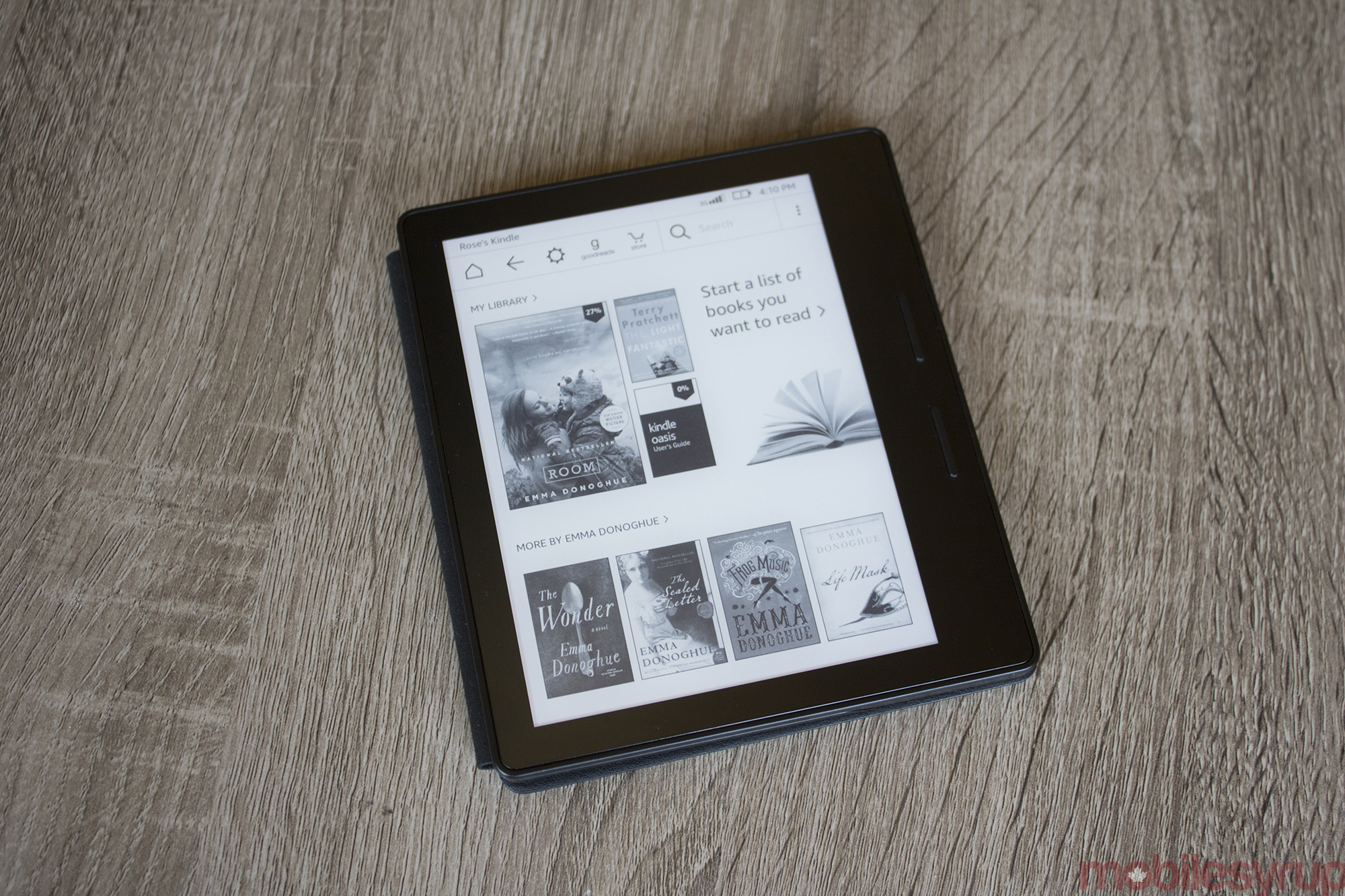 Regardless of the device version, another constant debate between Kobo and Kindle is its book ecosystem.

Many worry that Kobo’s book offerings are not as extensive as what Amazon can offer — and that’s absolutely true — but countering that is the fact that you can side-load and read more types of files on the Kobo than you can on the Kindle.

Meanwhile, the Oasis supports AZW, AZW3, TXT, PDF, unprotected MOBI/PRC and KFX natively, with HTML, DOC, DOCX, JPEG, GIF, PNG and BMP available through conversion. A notable exception is EPUB, though there are workarounds like Calibre. 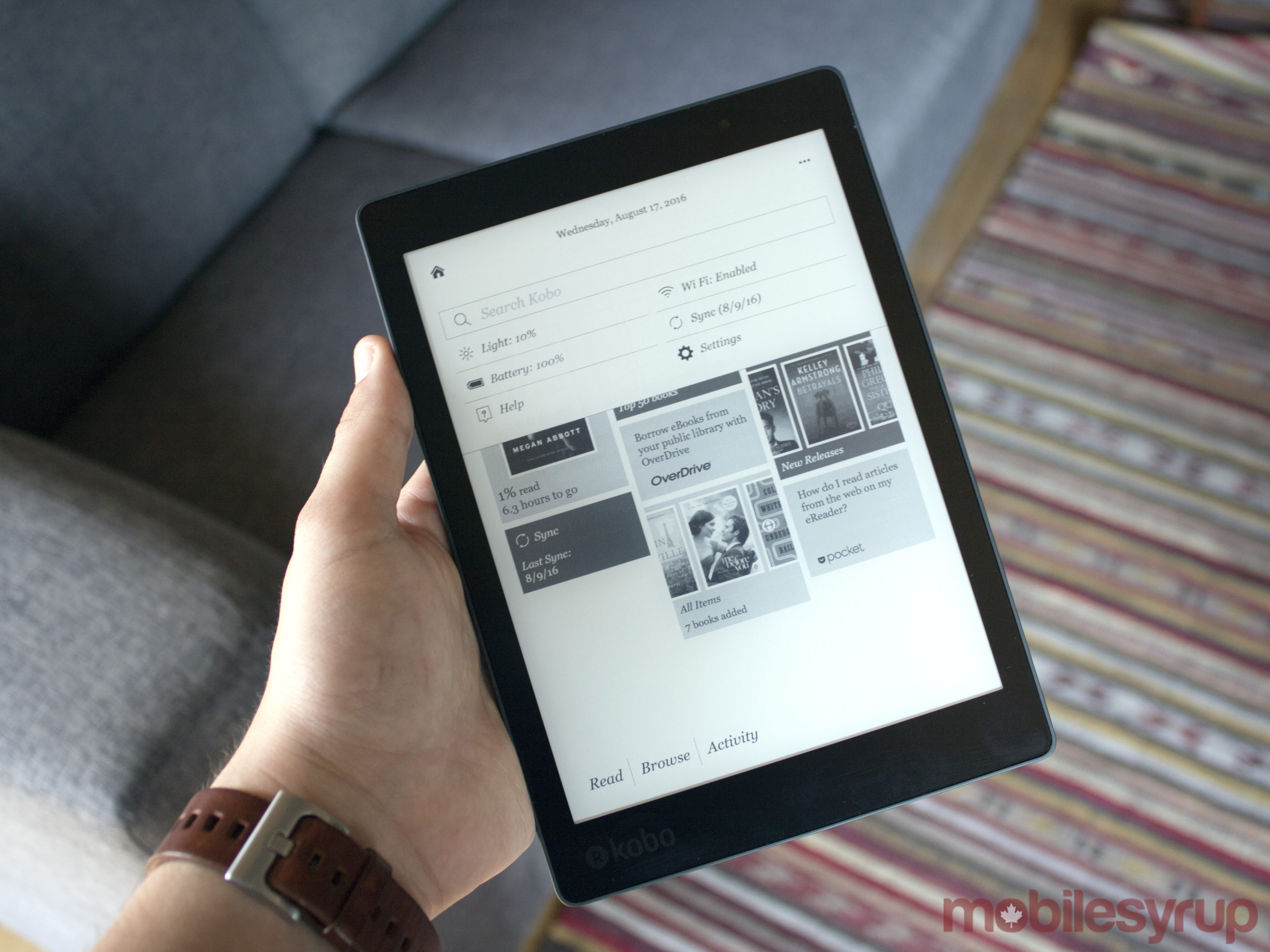 Additionally, Kobo takes the edge when it comes to library lending, as its Japanese parent company Rakuten recently purchased Overdrive, a global content distribution service that powers the e-book borrowing systems of many Canadian libraries. Overdrive’s technology has now been integrated into the Aura One to facilitate a super-simple check-out process for the Aura One, while the company refrains from offering Kindle lending at all here in Canada.

The Kobo is also integrated with Pocket, an application that allows you to save articles that you find while browsing for later perusal. To use it, readers simply have to install the app to their web browser and/or phone. Then when they save an article, they can later find it on their e-reader, as long it has Wi-Fi to download the content.

In that respect, Kindle’s Whispernet 3G is a blessing. While having trouble connecting the Aura One to hotel Wi-Fi (an issue I’m told was known and resolved), I was able to quickly and easily download books from my Oasis with no hassle.

And the winner is… 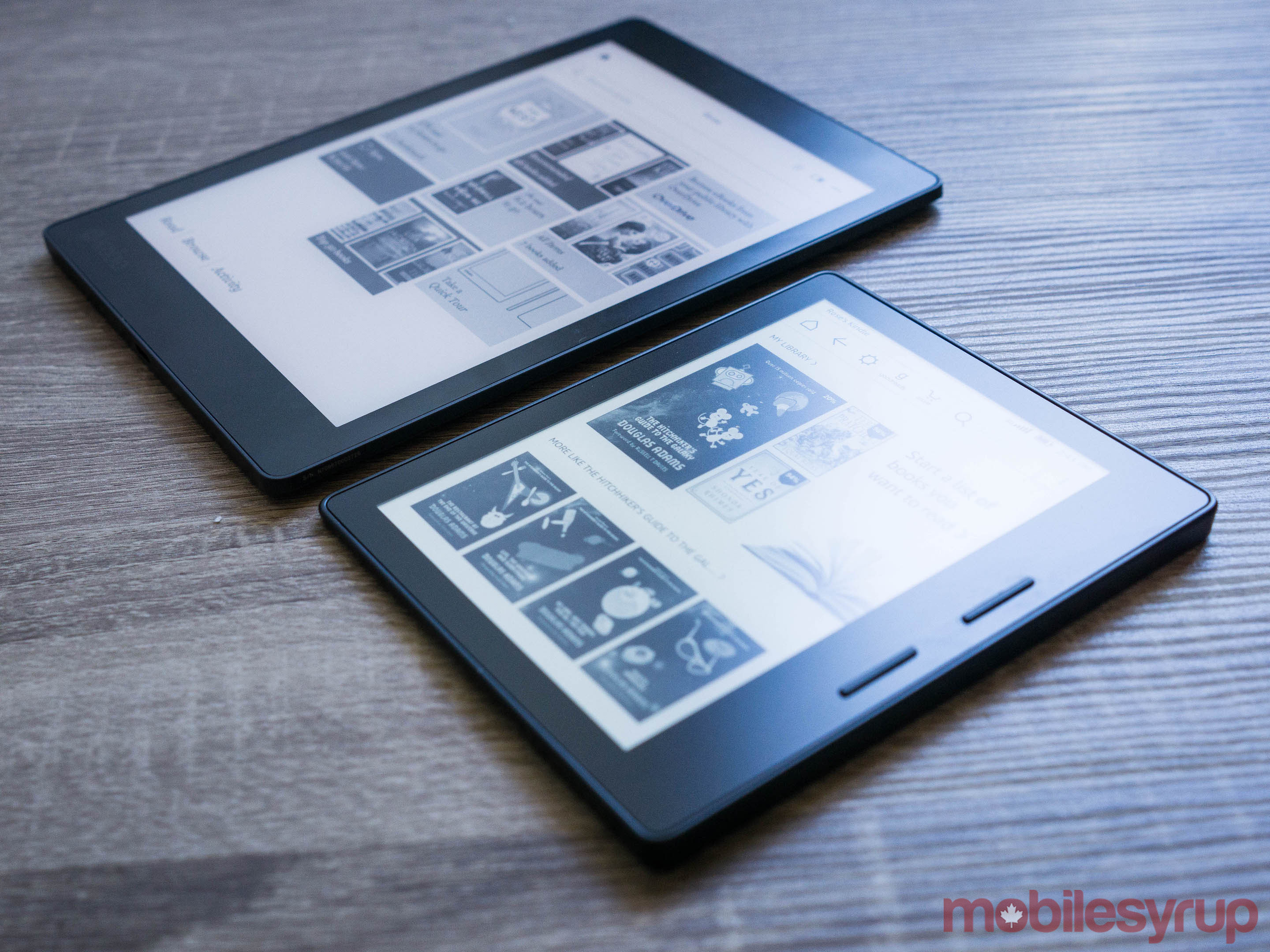 It’s Kindle’s easy user experience (as evidenced by Whispernet, among other things) that leads to an inevitable analogy between iOS and Android, with Kindle falling squarely into the role of Apple.

The Oasis is beautiful, thoughtfully designed, walled-in and pricey. The Aura One is durable, boundary-pushing, open and inexpensive.

As with Android and iOS, there’s certainly an argument for both, but ultimately I have to give my recommendation to the Aura One.

I was won over by the larger screen along with its slim and comfortable design, and the IPX8 rating and customizable red-spectrum lighting feature were the icing on top. At $250 CAD it’s an extravagant treat, but one that I would consider nonetheless.

I will note that I still love the Kindle Oasis for its handsome and unique design, but its value proposition wasn’t clear when it launched at $500, and now with the launch of the Aura One, it’s only become less convincing.

In the match-up between Kobo and Kindle’s latest premium devices, the smaller, Canadian-headquartered company manages to take the win.