Huawei Nova Plus review: A solid mid-range Android for the right price 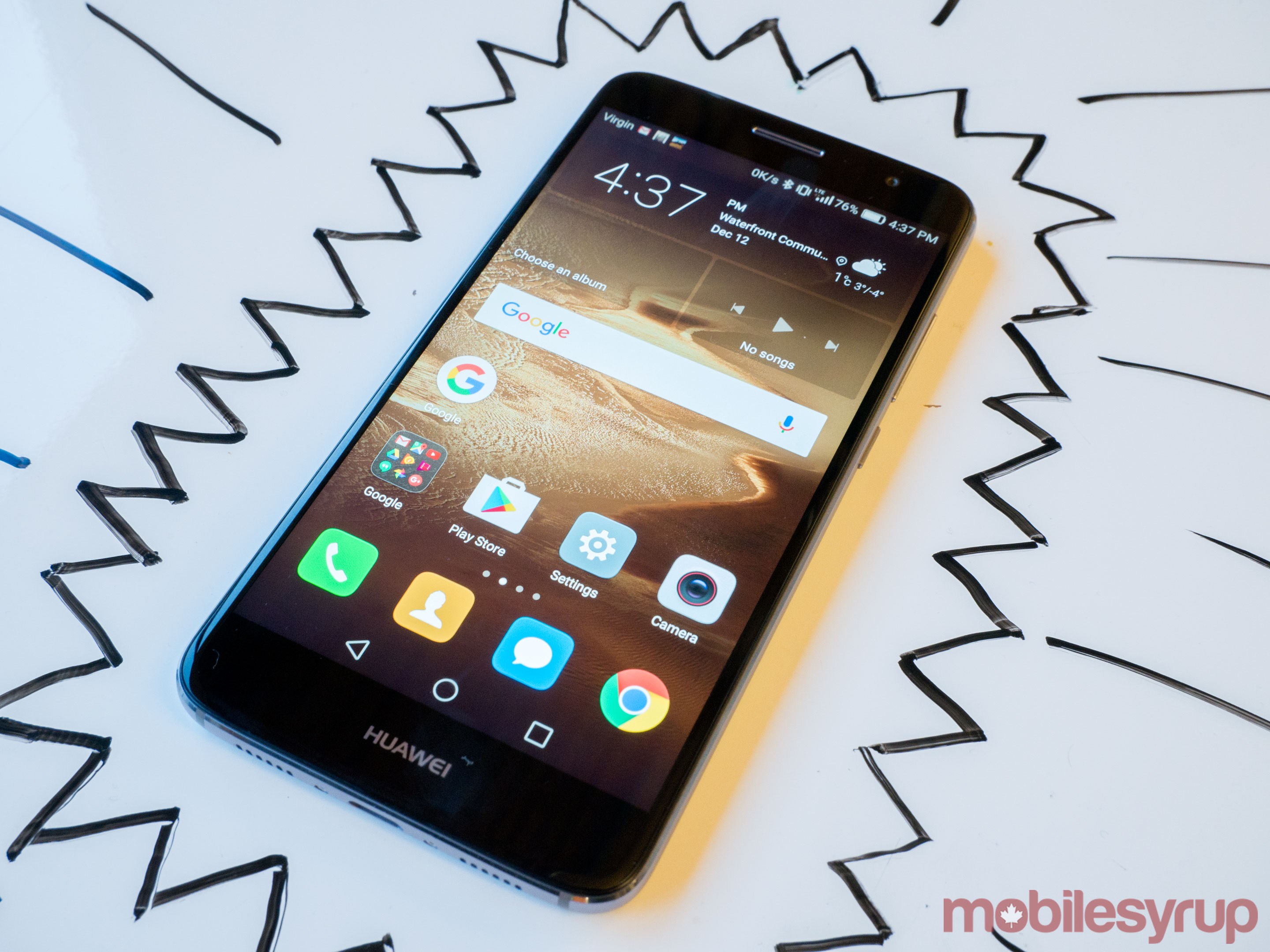 The Huawei Nova Plus’ sticker price is likely the first thing that will draw the eye of a potential buyers.

At $400 CAD outright and $0 down through Rogers, Fido and Virgin, the Huawei Nova Plus is certainly within most smartphone seekers’ budgets. But price is only one side of value, the other being quality. When considered together, the driving question becomes whether the Nova Plus can compete with the wide array of impressive mid-range handsets released this year — particularly the Asus Zenfone 3 and Moto Z Play, both of which had stellar battery life in addition to stand-out elements such as camera package or design.

To check out how well the Nova Plus compares to its competition, I took it for an approximately two week test drive and found a device that is dependable, but far from impressive. 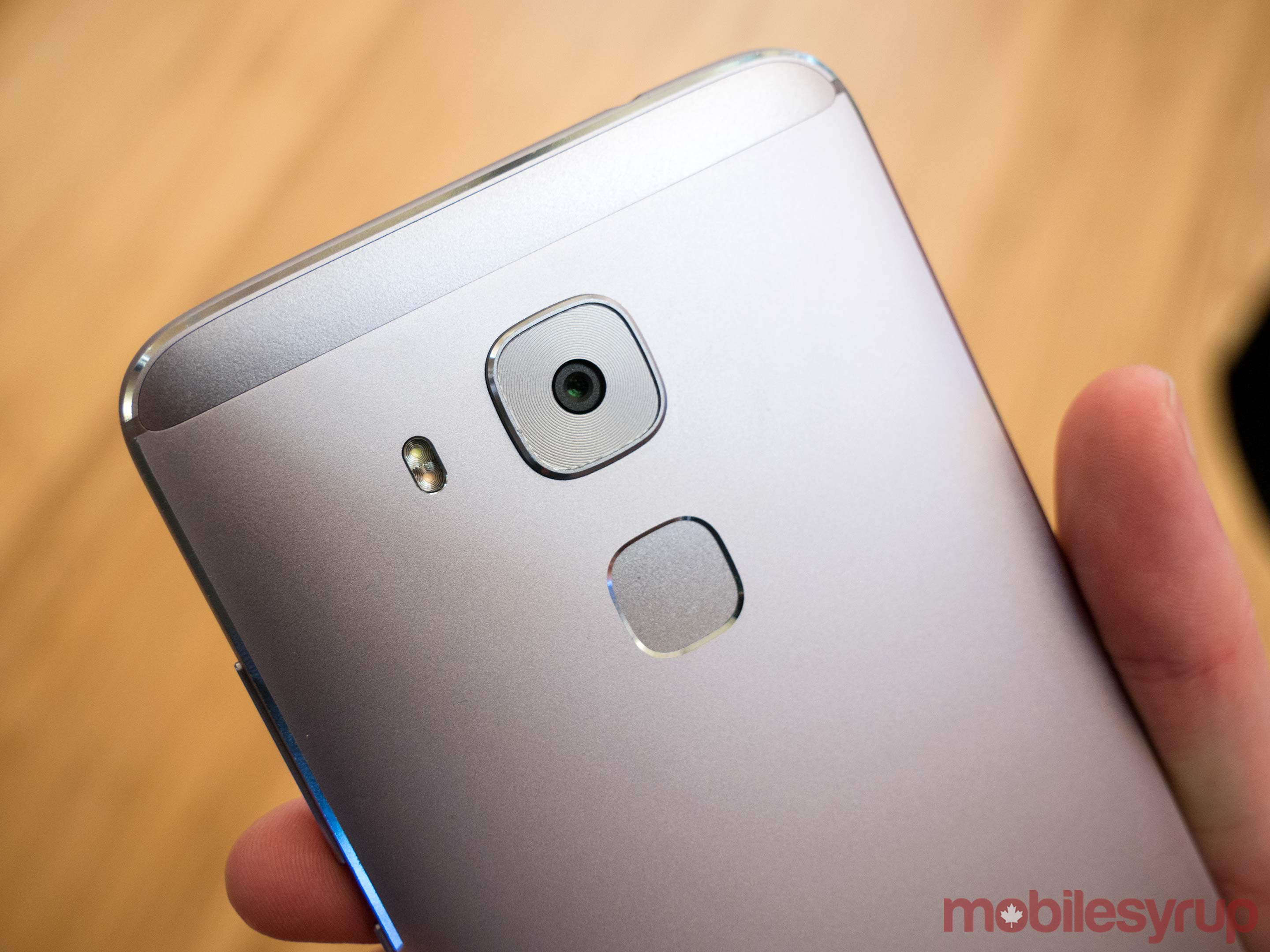 Given its track record, which includes the Nexus 6P and the P9, it’s no surprise that Huawei can make a handsome phone, and the Nova Plus lives up to that potential. It’s a device that could easily pass for being several hundred dollars more than its retail price. It has a metallic titanium grey unibody (silver and gold color variants are available in other markets), 2.5D curved glass and slim bezels.

Branding is prominent but not overwhelming, with Huawei’s logo appearing subtly on the front and the back of the device. The phone also features a rear-facing fingerprint sensor (not my preference due to the difficulty of unlocking while on a surface) that’s square but rounded, echoing the shape of the camera bump above.

One more thing I’ll say for the Nova Plus — it’s sturdy. I flung it from about four feet onto a tile floor and the ding pictured below is the only sign the incident ever happened, which is a far better result than I’ve experienced in the past in similar predicaments (admittedly, I have a case of the butter fingers.) 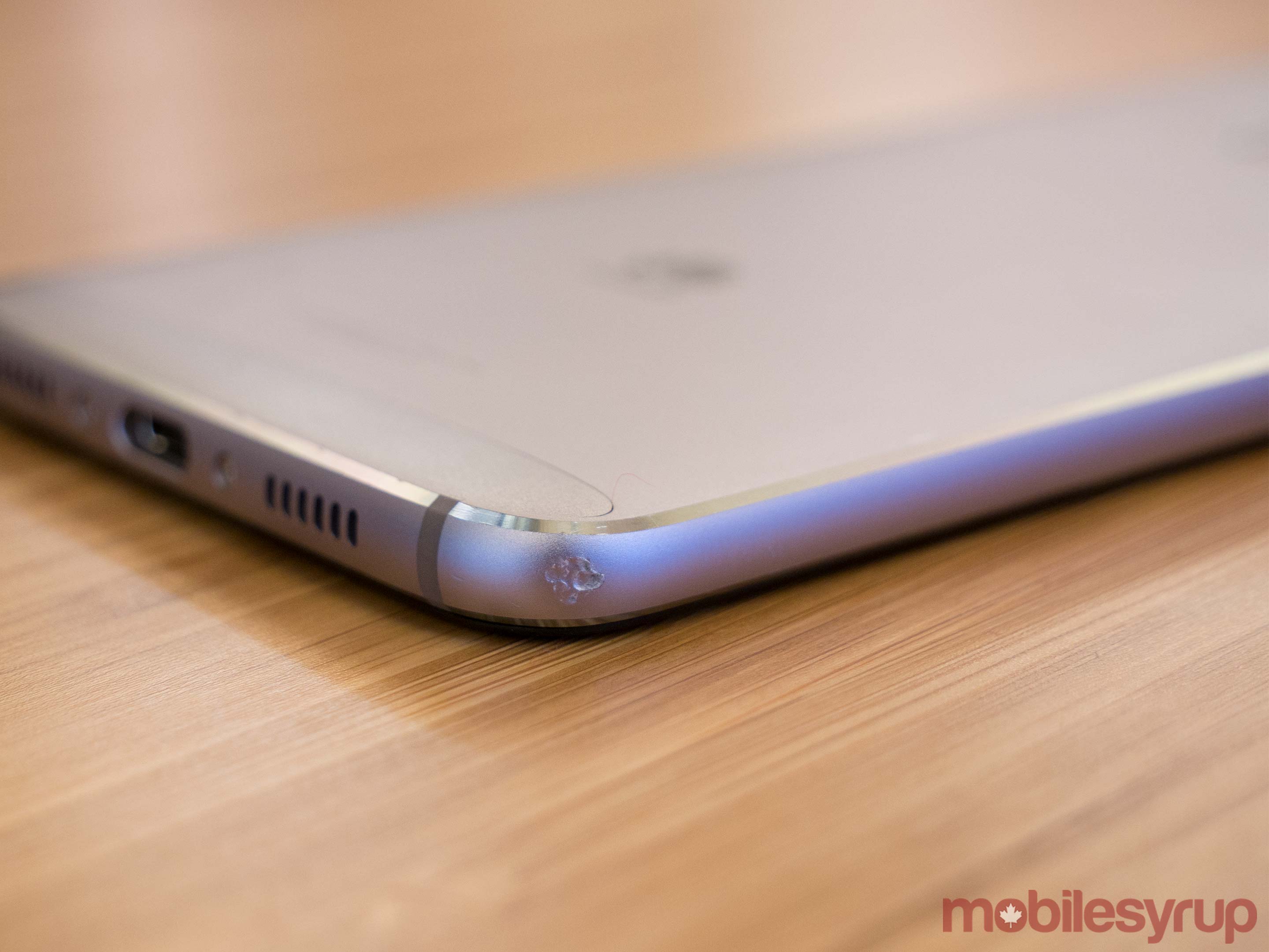 The 5.5-inch display carrying device has a height of 151.8mm, width of 75.7 mm and a thickness of 7.3mm. This makes it thicker than the Moto Z Play, but thinner than the Asus Zenfone 3 as well as shorter and less wide than both devices. It weighs in at about 160 grams, neither excessively heavy or light placed in the context of the overall mid-tier market.

As for ports, the Nova Plus follows the current industry standard for most Android devices — 3.5mm headphone jack and USB-C charging. In Canada, the model available for purchase is MLA-L03, the single SIM variant. 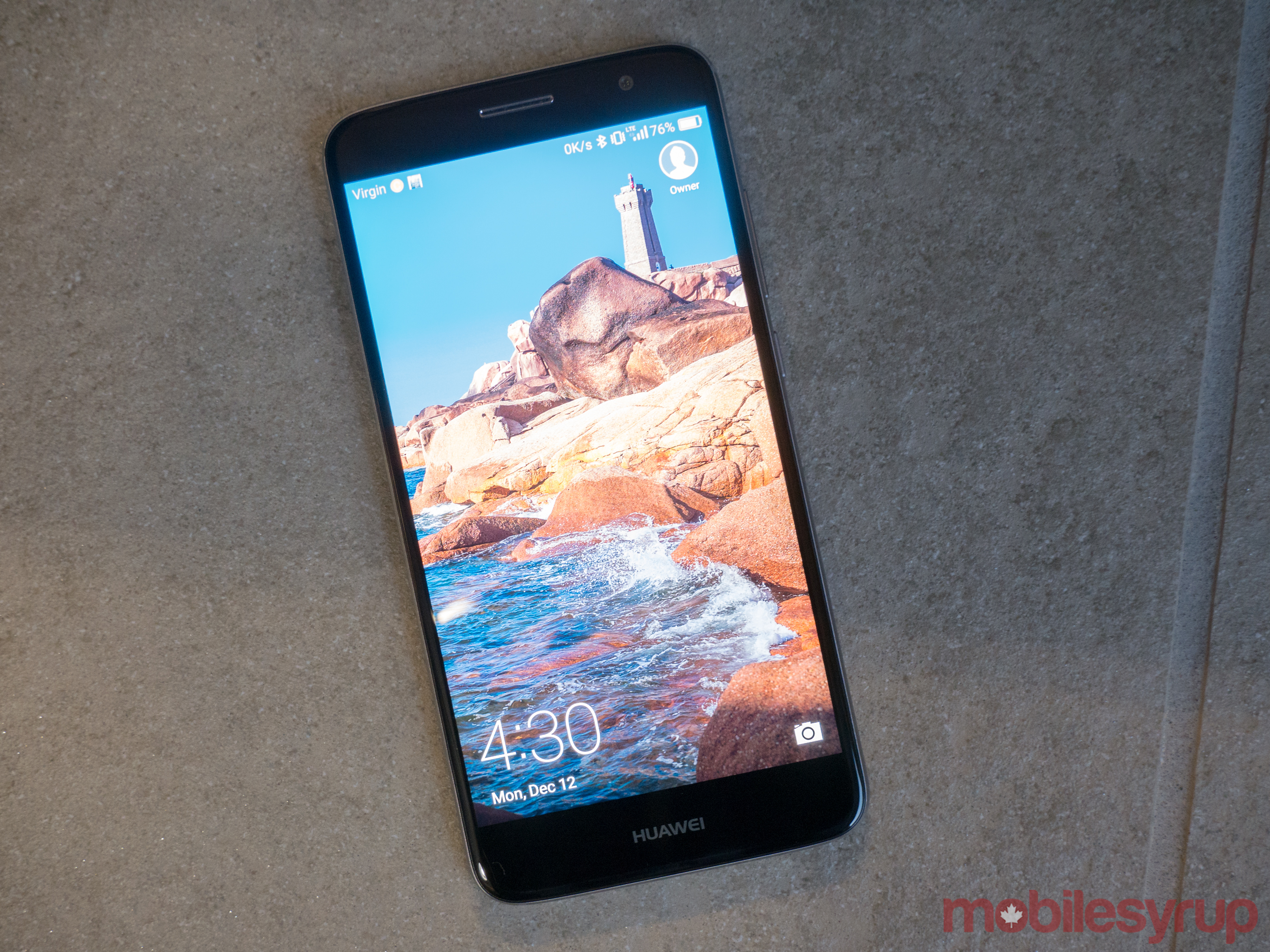 The Nova Plus’ IPS display is a standout visual element of the phone, contributing greatly to its overall high-end look. It has 450 nit brightness, which is more than enough to contend with the sun outside and looks beautiful inside.

The colours are also strong and accurate. But while the display looks great, when it comes to the demands of mobile VR headsets, it’s not going to be an ideal device. At 1920 by 1080 pixel resolution with a 401 pixel per inch density, VR graphics are going to appear pixelated and lacklustre, considering even the Pixel, with a 440ppi display, has garnered complaints. In comparison, the Pixel XL features a 534ppi density, while the Samsung Galaxy S7, which offers mobile VR through the Samsung Gear VR headset, has a 577ppi density.

A trusty but unimpressive shooter 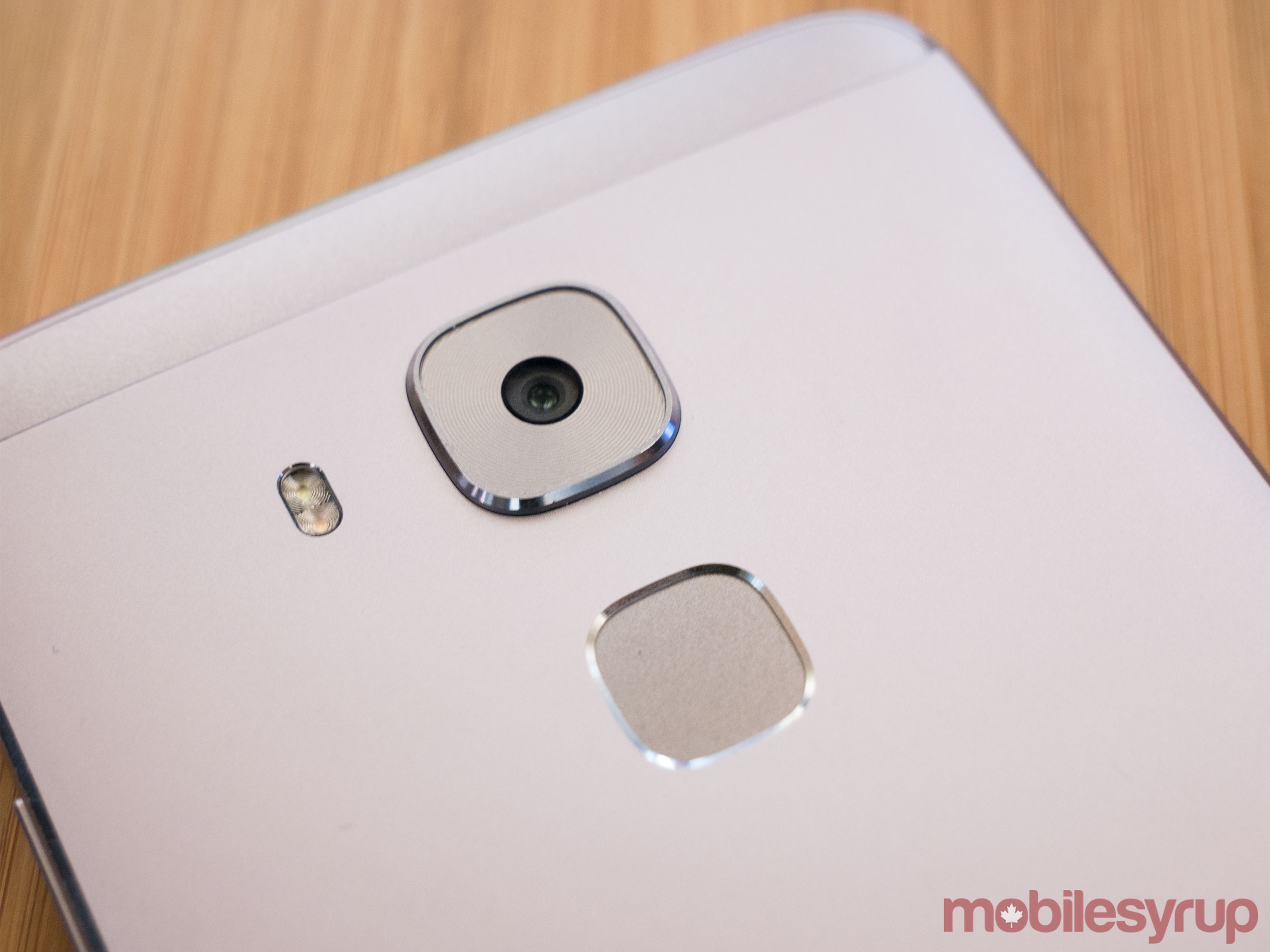 The Nova Plus boasts a decent camera package: 16-megapixel, f/2.0 aperture rear-facing camera with OIS and phase detection autofocus. It takes pretty stellar pictures in good light and has the basic features you would hope for: panorama, HDR and beauty mode. There are downsides, as well, but nothing damning. Just what you would expect from a $400 phone. The camera is a little slow to launch, particularly when locked. Low-light shots are often blurry. Indoor shots are often too yellow and too much white in the background will wash out the entire picture.

The Nova Plus isn’t a phone you’d bring with you if you needed professional looking shots, in other words — but that’s something that not many mid-range Androids can brag about, apart from possibly the Asus Zenfone 3, a standout in the field. A nice bonus is that the camera is capable of 4K video shooting at 30 frames per second.

Footage, however, is of middling quality and appearance — especially indoors, where the camera is plagued by the same issues mentioned above. The image stabilization, too, leaves something to be desired. The camera bounces and blurs significantly when walking at a normal pace or panning.

The front-facing camera features an 8-megapixel shooter with fixed focus and a f/2.0 aperture. It comes equipped with time-lapse, beauty and make-up modes. Beauty is standard, and what we’ve come to expect from Android smartphones. It buffs out your imperfections well. The make-up adding feature however, is nightmare fodder, as evidenced by select selfies included in our gallery. 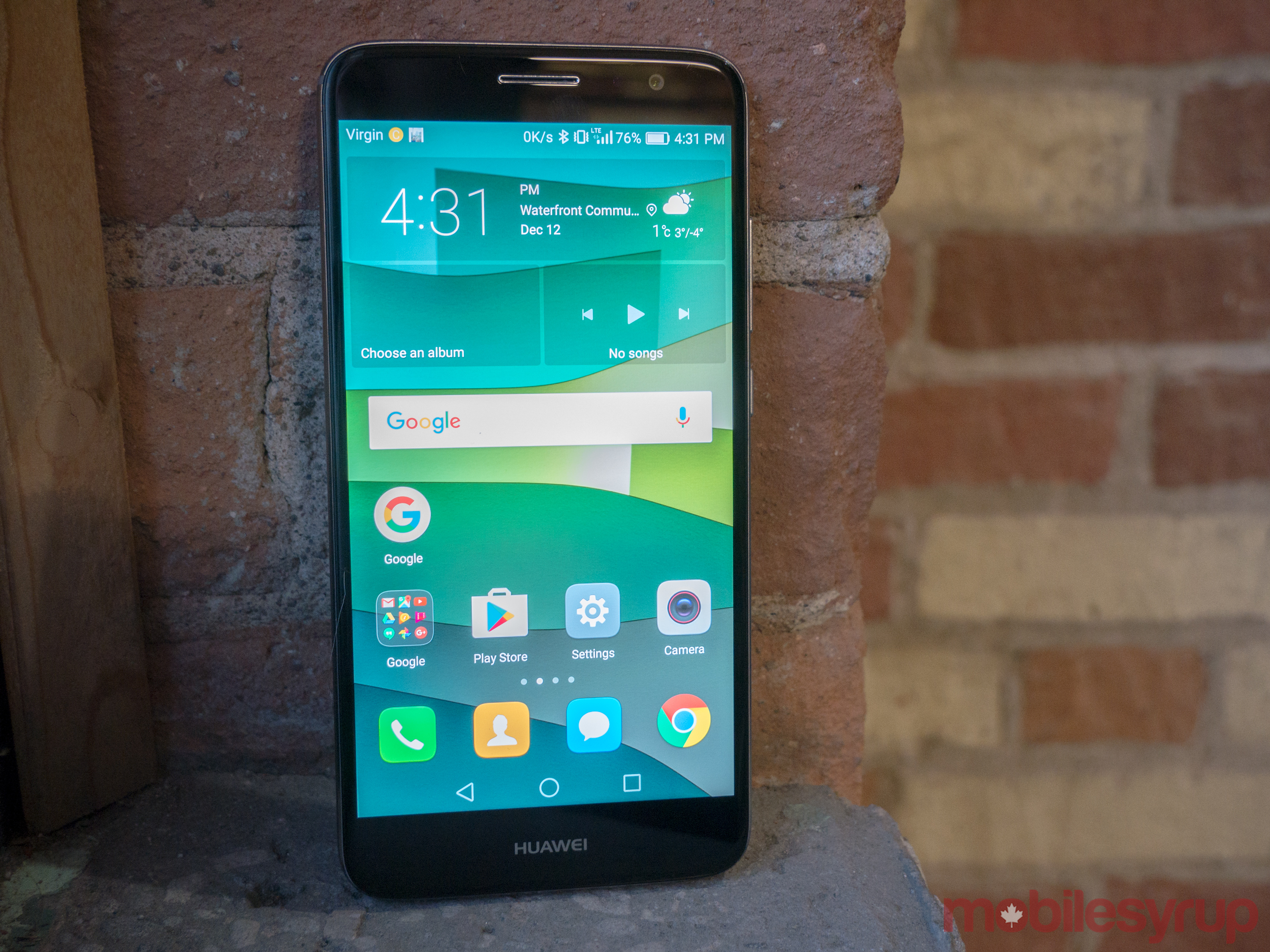 The Nova Plus runs on a Snapdragon 625 octa-core processor clocked at up to 2.0 GHz, with 3GB of RAM. Backing up my experiences with both the Moto Z Play and Asus Zenfone 3, I find the octa-core Snapdragon 625 to be an exceedingly high-performing chipset considering its mid-range tier. It’s stable and hums along well, though zippy would be overstating things. RAM management is also well-executed, as is heat management in moments of stress. I rarely experienced an app crash or malfunction.

As for ROM, the device comes with 32GB of storage, though 10GB is reserved for the system — unsurprising when you glimpse the skin and the large amount of pre-installed bloatware. The storage can be expanded by up to 128GB through a MicroSD card.

Not overwhelming but also not overheating 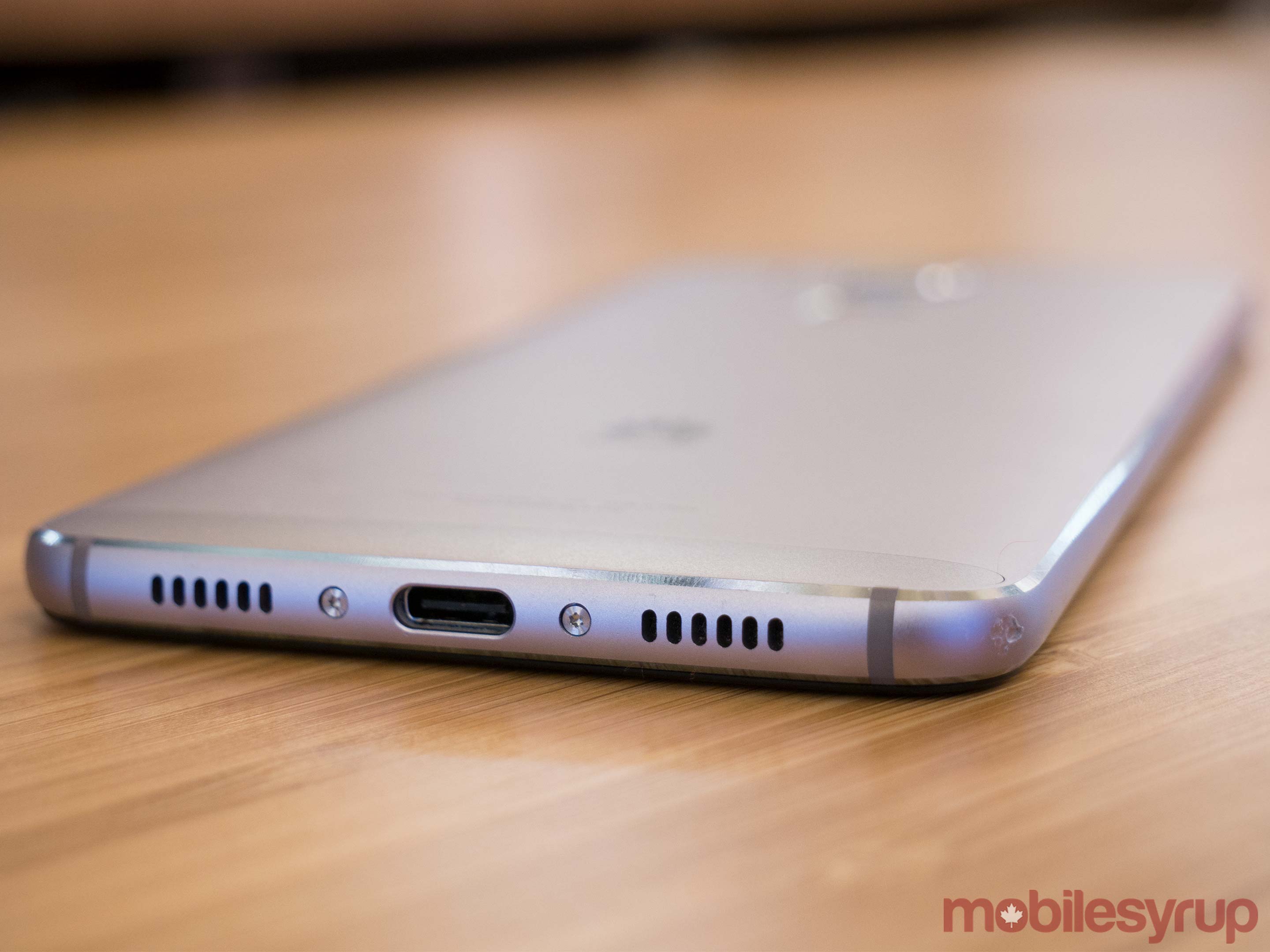 Huawei promises 2.2 days of battery power with the Nova Plus — an exceedingly bold claim for the phone’s 3,340mAh battery. In reality, I got a two days of mixed use, by which I mean I had to plug the device in at around 9 p.m. on the second day as it neared shutdown. As for my mixed use, I usually average multiple hours of meme browsing on both Wi-Fi and data, combined with at least two hours of podcast listening or music streaming.

I will note that my use during my period was lightened by the fact that I was carrying another device that I occasionally took pictures and listened to podcasts with. On more varied days in which I used the smartphone as my sole driver, it was not able to give me much more than a day and a half’s charge — and what’s the point in exceeding a day, at that rate?

This, like many other aspects of the handset, is not something I would qualify as an issue — in fact, the battery life is commendable in comparison to the vast majority of mobile phones in the market. It just so happens that there have been some mid-range devices that have come out in the past year that have displayed shockingly long-lasting battery life — here I’m thinking of the Moto Z Play and to a lesser extent the Asus Zenfone 3.

When it comes to battery heat, the Nova Plus remained at a fairly steady 32 degrees Celsius while in moderate use and peaked at about 37 degrees Celsius after using Snapchat face filters — an extremely processing intensive AR feature — for about 20 minutes. Even at that peak, the phone felt nowhere near to being uncomfortable in the hand, a slight warmth was all I noticed, which is quite the feat for a phone with a metal unibody.

UI on the bloated side 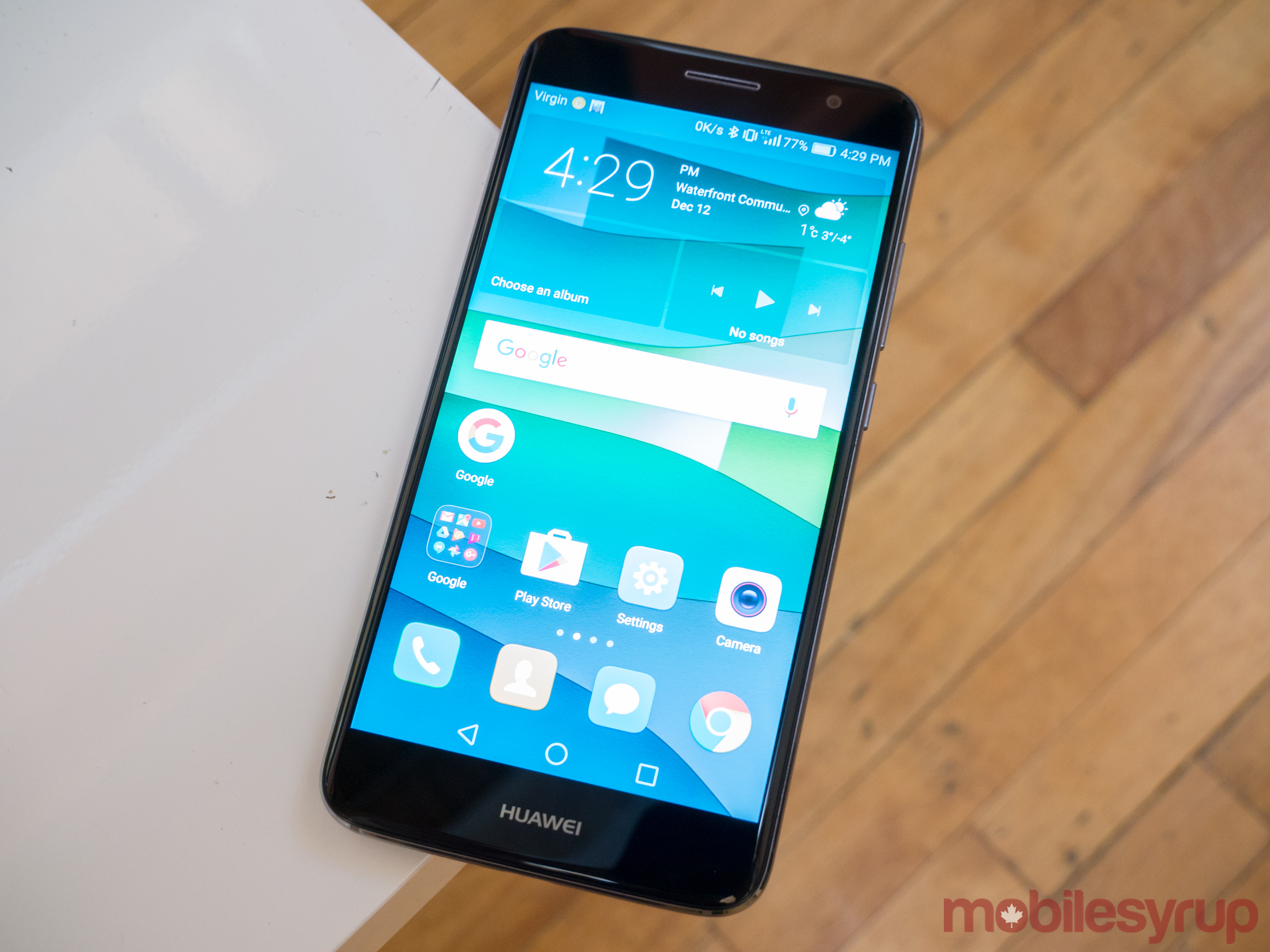 The UI on this device is going to be the make or break element for many potential buyers. It runs Android 6.0 Marshmallow out of the box covered with Huawei’s Emotion UI 4.1 (EMUI) and looks almost nothing like stock Android. This is, of course, more of a crushing blow for some than others and I have to admit that I’m amongst the group that finds oppressive skins extremely disappointing because of my love for stock Android.

However, if I attempt to take the UI at face value, it’s not an unpleasant user experience. The layout is intuitive. Digital home buttons on the bottom of the screen topped by system applications that can be moved but not deleted (there are, unfortunately, almost 40 of those).

The home screen lacks an app drawer, which is unfortunate, and EMUI 4.1 also lacks the ability to add any sort of personal information or news feed to the left of home – Google or custom. To make up for this loss, I stocked the screen to the left of home with the chunky Google widget along with a few others, but ultimately it wasn’t the same.

One thing that did frustrate me — though I’ll admit not in an extreme way — was the pull-down notifications screen. In most other phones pulling down from the top of the screen will take you directly to shortcuts for device amenities such as flashlight and Wi-Fi – things that you’d like to access quickly. With the Nova Plus you get notifications first, requiring another click before you can access shortcuts.

An element of the skin I appreciate, on the other hand, are the notifications that appear when an app is hogging a lot of RAM in the background, prompting you to close it and showing you how much space it took up. Similarly, when cycling through apps the device indicates how much RAM is currently free and offers a garbage can button that allows you to close all apps at once.

All in all, though, the Nova Plus simply dictated my storage space too much, taking 10GB and forcing me to keep apps ranging from Google’s regular suite to its own weather app, music app, recorder app and more. 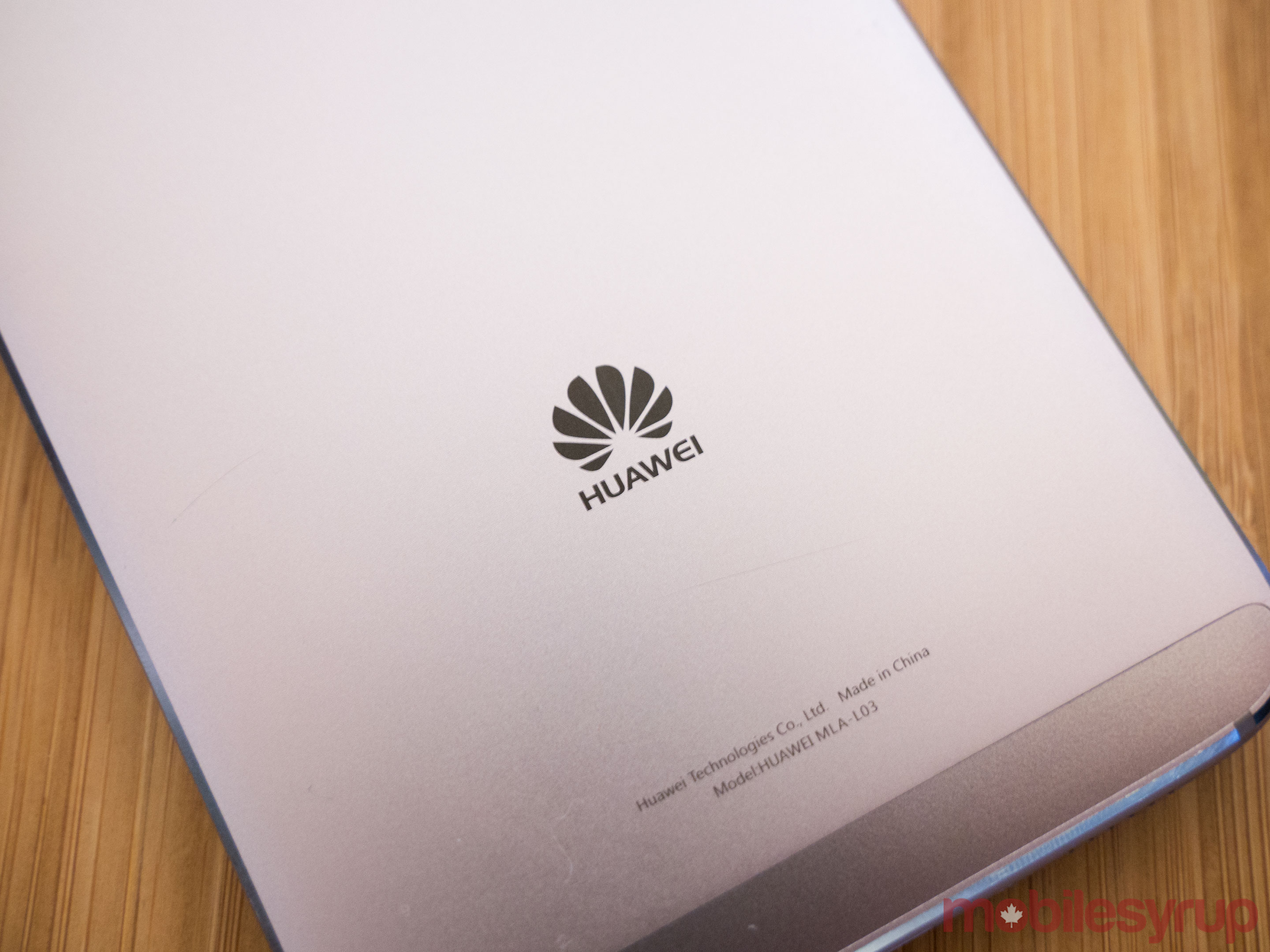 The audio experience is impressive on the Nova Plus. Its bottom-firing speakers are capable of producing high-volume sound with a reasonable depth – though it sometimes lacks bass. Its wired headphone performance with my Bang and Olufssen earbuds also provided strong, clear sound on par with many high-end devices.

As for calls sans earbuds, it was certainly passable even in loud areas. Phone call audio has clearly become the lowest of priorities for many manufacturers, so it’s nice to see some that still retain a decent quality.

Is it the mid-range you’re looking for?

The Huawei Nova Plus may not be the best mid-range Android on the block — it’s far outdone, in my opinion, by the Moto Z Play and the Asus Zenfone 3 — but it is one of the best value options, considering it comes in at a reasonable $400 while the Moto Z Play costs around $650 outright.

The Asus Zenfone 3 offers a much more reasonable comparison at about $430. However, it’s only available online — which negates the opportunity to get it for a reduced rate upfront from a carrier and may not provide the same quality of warranty when bought from a carrier. Meanwhile, the Nova Plus can be picked up at Rogers, Fido and Virgin for $0 down on a two-year contract. While the bloated UI may be enough to turn some off of the phone, the steady capability of this well-designed device makes it a great contender in the mid-range space.