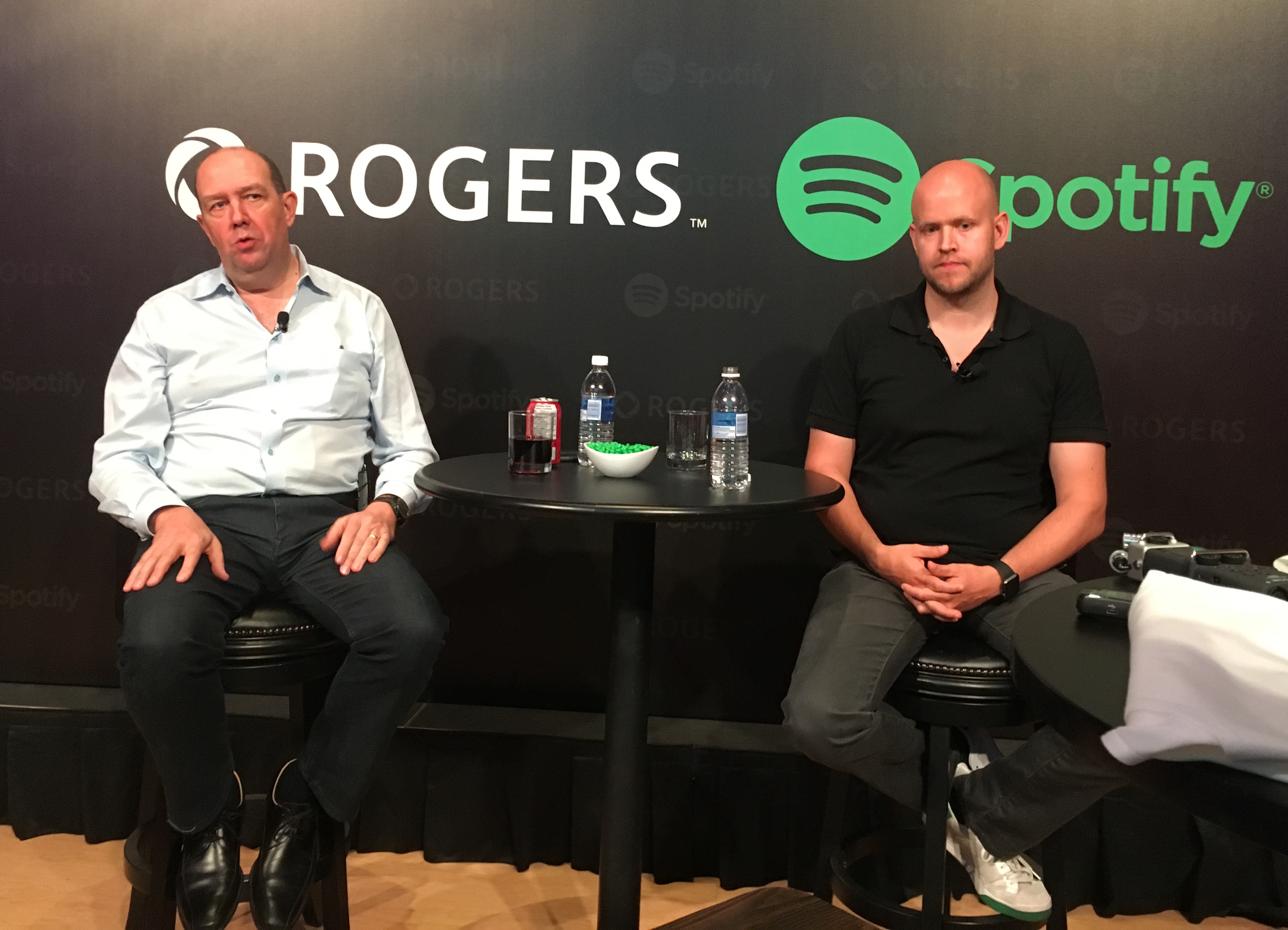 Rogers brought Spotify CEO Daniel Ek to Canada this week on a media campaign to promote the two companies’ music-focused partnership. What began as an integration with Fido’s new Pulse plans has expanded to Rogers’ own higher-margin Share Everything product, which provides customers two years of Spotify Premium streaming for up to three customers per account.

Ek said that Canada was one of Spotify’s fastest-growing markets, noting that the country “pulled above its weight” in terms of overall streaming usage. Laurence then claimed that 95 percent of streaming music listeners on his network do so almost entirely on their mobile phones, choosing to boost the amount of data they use per month in the process.

“We see this as a longer-term boost to ARPU (average revenue per user),” Laurence said, but for now he’s just happy more Canadians are listening to streaming music on a regular basis.

Laurence sought a partnership with Spotify last year, and completed the agreement in just two weeks, according to the CEO, who has introduced a number of so-called “value adds” to go along with Rogers’ higher-cost plans. “Hardware has started to become a little bit stale,” he quipped, citing the move towards premium content experiences as a way for customers to justify spending more on their monthly plan.

Laurence’s vision for Rogers’ future is in line with many of his counterparts in the U.S., which see the telco as morphing from a “dumb pipe” into something a bit more nebulous, existing in between the sphere of infrastructure and experience. While it may not be seeing returns from his Rogers 3.0 revitalization, which included a brand overhaul and significant reshuffling of the executive deck, Laurence is confident that the plan will pay dividends in the long run.

“We’re not going to comment on specific numbers,” he said to the small group of media in attendance, “but we saw great numbers last quarter,” highlighting Rogers’ first net subscriber gain in nearly a year, “and long may it continue.”

Laurence denied that smartphone plans are actually getting more expensive, saying that cost per gigabyte has dropped significantly over the past few years, and that most Canadians are buying larger data buckets, which provide more value in the long term. The company recently did away with its popular 6GB option, pushing customers towards a larger, more expensive 9GB plan. He also dismissed the notion of adoption instalment plans similar to carriers in the U.S., noting that “we had them back in the U.K. [when he was CEO of Vodafone UK] and they didn’t work so well.”

The idea of using one’s smartphone for everything has had enormous implications for the music industry. Spotify recently added live news broadcasts, along with thousands of podcasts and videos, in order to cater to customers who were consuming that content elsewhere. “Everything we do is meant to strengthen the core business in music,” said Ek, claiming that the more time people spend in the app the more they tend to listen to music in their downtime. Similarly, he said Spotify’s highly successful freemium tier, which offers selections of songs and albums with ads, drives a huge amount of business to Spotify’s premium tier, which in turn helps Spotify pay out more money to the artists.