Rogers has added yet another tier to its growing lineup of smartphone plans in an effort to further distinguish itself from its competitors, Bell and Telus.

Dubbed Share Everything+ (Plus), the plans consolidate many of the so-called premium add-ons introduced through its various partners or sub-brands over the last year — Shomi, Next Issue Canada, and Spotify — into a single tier of shareable smartphone plans.

Replacing the Share Everything plans above 1GB of data, the Plus tier utilizes those services to entice customers to sign two-year contracts. Specifically, the 500MB and 1GB plans are still considered Share Everything, with the Plus moniker representing four new price points, replacing the older lineup.

Every account that signs up for a Share Everything+ plan can choose between 24 months of Spotify Premium, Shomi, or Next Issue Canada. Rogers partnered with Spotify to launch Fido Pulse in April, but this option expands the pool to three separate accounts, which can be shared with an additional two family members on various screens and devices.

Along with Share Everything+, Rogers now allows numbers added to an account — up to 9 in total plus the original — to choose between unlimited local and unlimited nationwide calling, for a potential discount of $5 per month. Previously, additional numbers had to adhere to the voice plan chosen by the original signer, even if that price point wasn’t needed. 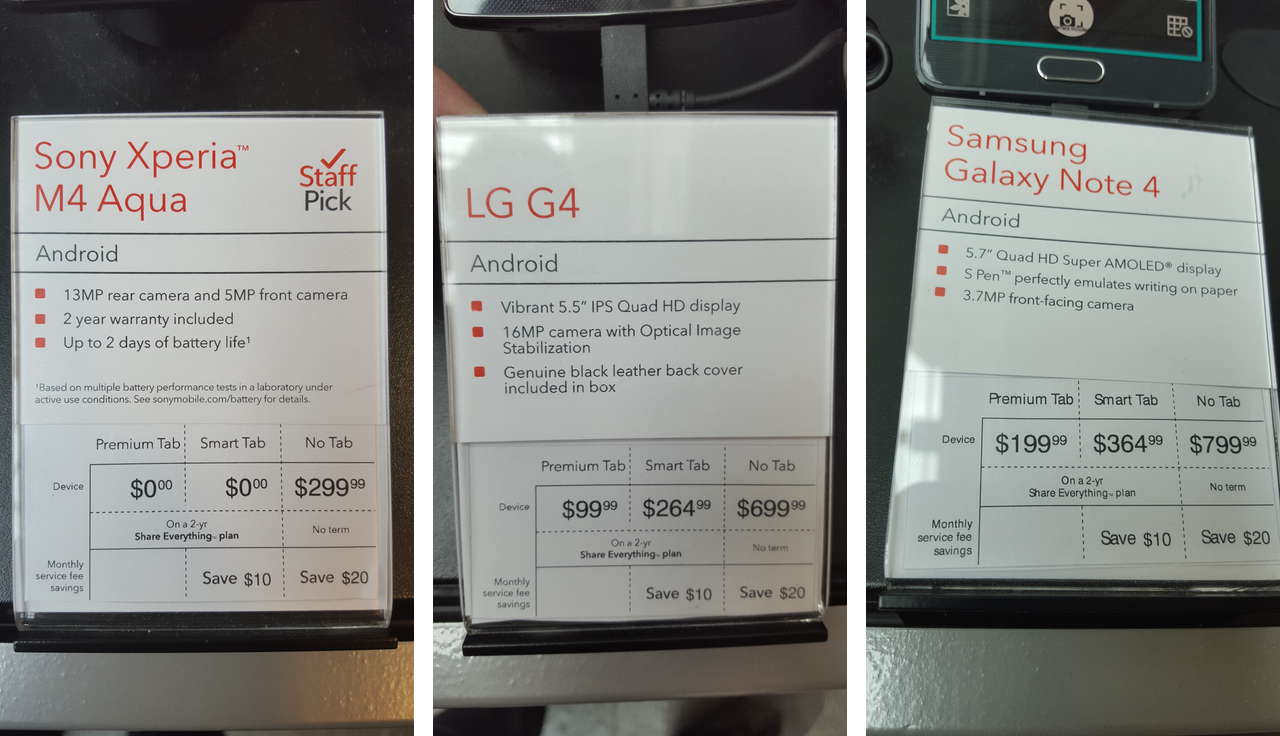 Rogers recently altered the nomenclature for which it refers to its various subsidy tiers. Instead of offering Smartphone plans for more expensive devices and Smart Picks plans for those generally under $300 outright, the company now offers Premium Tab and Smart Tab, which differ only in the amount of device subsidy offered when purchasing a smartphone. Likely an indication Rogers intends to eventually drop subsidies entirely (or introduce a hybrid model à la Wind Mobile), paying more for a smartphone up front leads to savings of $240 in one’s plan over two years by saving $10 per month.

Compared to the delta between up-front prices in both tiers, users can save $75 over 24 months by buying a phone on a Smart Tab versus a Premium Tab. For more expensive devices like the LG G4 or Samsung Galaxy Note 4 (above), it’s actually a better deal to buy the phone on a Smart Tab and save $10 per month over buying a phone outright and save $20 per month, since the subsidy is so generous. According to the CRTC’s Wireless Code of Conduct, a smartphone must be paid off in full, over equal instalments, within 24 months. That Rogers issues a $10 monthly service credit for a phone that still has $435 in subsidy is actually quite generous in this industry.

According to Raj Doshi, Rogers’ Executive Vice President of Wireless, the time is right for such a change. “People are using their phones for more than just sending emails, texting or making a call – they’ve become portable entertainment devices.  More than half of digital content is now consumed on mobile devices, which is why we are introducing our new Share Everything+ plans,” he said in an emailed statement to MobileSyrup. “We designed these fully loaded, customizable plans to meet the needs of every family.  Families can choose one content experience they want to enjoy – unlimited music with 3 Spotify Premium accounts, TV and movies with Shomi or the latest news and magazines with Next Issue – and share across devices and family members on the plan.”

The new tiers begin at 2.5GB ($95), rising to 5GB ($110), 9GB ($130) and 15GB ($160). Compared to the older pricing model, you’re actually getting slightly more for your money — the new 5GB tier costs the same as the older 4GB tier, and the new 9GB tier is only $5 more than the previous 6GB — but Rogers has eliminated the popular 6GB option completely, forcing customers who use more than 5GB to upgrade to 9GB for $20 more (or spend $5 extra per 100MB of overage). It’s also now $5 cheaper to buy 15GB of shareable data, but Rogers has eliminated the 30GB plan for some reason. And, of course, each of those new tiers gets the choice of two years of Spotify, Next Issue Canada, or Shomi (though only Spotify is for more than one line — up to three maximum on the same account).

Share Everything+’s new price points are somewhat masked by Rogers’ new default setting of showing them with local calling and Smart Tab options selected. As explained above, the company is encouraging users to save $5 per month by choosing unlimited local calling, which limits free calls to those within one’s nearby calling zone, and $10 per month by choosing a smaller device subsidy. Rogers has also quietly changed its overage rates to align with the rest of the industry: instead of paying $15 per gigabyte above one’s data allotment, they’ll pay $5 per 100MB, which works out to a whopping $50 per gigabyte.

The company isn’t overhauling its wireless pricing model with Share Everything+, but it is further differentiating the Rogers brand from its competitors, and its own flanker brands, through higher prices and those associated premium experiences. Whether music, magazines or movies will help the company regain some of its lost magic — it showed a net gain of wireless subscribers last quarter for the first in a number of months — remains to be seen, but it’s nice to see a Canadian telco attempt to shake things up.