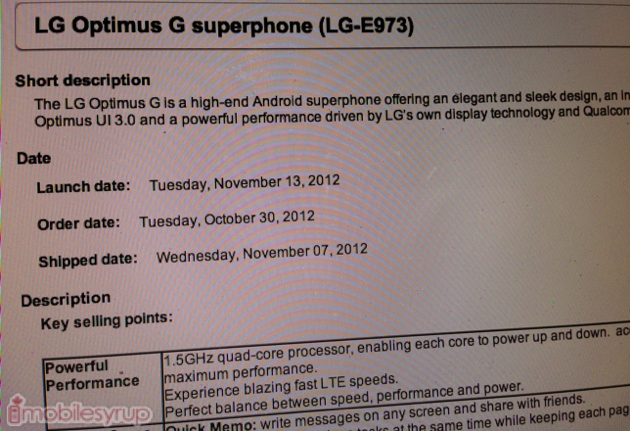 This really isn’t too much of a surprise. We’ve seen Rogers go live with LG Optimus G pre-orders, plus TELUS also announced that it’ll officially be available on November 13th. Now, according to an internal doc we received, Bell will be also joining the fun and making this LTE-enabled 1.5GHz quad-core powerhouse available on November 13th. You can expect the no-term pricing to be $649.95.

The Optimus G comes with Android 4.0.4 ICS, but has been promised an upgrade to Jelly Bean “early 2013.” In addition, since this device is NFC-enabled, we’ve found out that in the box, at least via Bell, users will receive a couple NFC Tags. Other notable specs have the Optimus G coming with a 4.7-inch display with a resolution of 1280 x 768, 8MP camera that shoots 1080p HD vids, and only 8.45mm thin.

What do you think? The Optimus G or  the Nexus 4?
(Thanks tipster!)