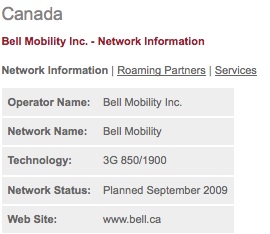 It was only a couple weeks ago that the GSMA confirmed a September launch for TELUS‘ new HSPA network, then miraculously changed to October a couple days later.

With our Canadian wireless space changing so rapidly these days: new network launches, new carriers coming in, potential mergers and rate plans dropping… Canada is not shy of drama. However, checking out the GSMA website again today they show some updates (thanks simcity) when it comes to the carriers network launch date:

Even with these dates above, things can happen and they can change just as fast as we saw the TELUS date move. There are some things we do know when it comes to possible device/product launches (there are a few other devices/products we have omitted as we are waiting on confirmation):

Globalive (WIND Mobile):
WIND Mobile recently announced on their site that “We will not have the iPhone at launch”, but did reveal through another post that “We will allow unlocked handsets onto our network… we are in discussions to source smart-phones from a number of vendors (including Android); and we are talking to both “brandname” manufacturers as well as some new manufacturers.”

We’ll have more info shortly… ever second that passes gets another second closer to all this great competition!