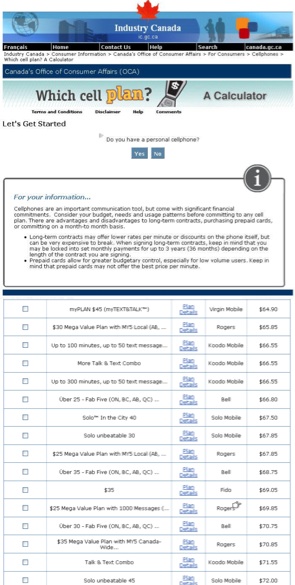 Last week our hard working Canadian government was given a great deal of slack for dropping the proposed “Which Cell Plan? A calculator” initiative. This was the online tool that would have helped customers possibly choose the right carrier and the right cellphone plan… hopefully saving us some money in the long run.

However, the idea was squashed due to “technical reasons”. But information eventually leaked out that this was not the real reason. Apparently after a number of successful focus groups (valued at $60,000 out of tax payers pockets) the carriers expressed extreme interest and believed the “calculator” would reduce their profits and promote lower-cost plans. Eventually the project was shelved.

Then we saw the Canadian Wireless Telecommunications Association (CWTA) step up and say it wasn’t anything to do with the carriers, but the tool itself. Bernard Lord, President & CEO of the CWTA said the calculator was “flawed since it did not take into account data plans, bundle discounts and hardware subsidies offered by carriers”… in addition, “the minister made the right decision, to not continue to dump good taxpayer money into a tool that was ineffective”.

Flawed and ineffective. Shelved due to “technical limitations”. We actually believe the government made the right move. We were sent 10 slides from the proposed “Which Cell Plan? A calculator”, this was somehow put online (probably from the Industry Minister’s office to defend their point of view) and shows us what they built and how it would operate.

Industry Canada gives and official description of the calculator as “an interactive tool to help you better understand the Canadian cellphone marketplace… The calculator sill suggest examples of Canadian personal cell plans which may match your needs. It has information on monthly, prepaid, network and share plans.”

Actually, it would have been outdated from the gate. With plans changing so much, almost day one, the description goes into more detail by saying “Prices and costs are approximate and plans are examples of what can be found in the marketplace – not every plan may be included. The very least expensive plan may not always be the best for you”. Even under the Terms and Conditions” section Industry Canada knows it’s somewhat a lost cause as they state “Service plans offered by cellphone providers are constantly changing. We update pricing and service plan information periodically”. Basically saying, take your valuable time and enter your info here but it may not be right… check back later.

Take a peek at the slide show, you’ll see how you can enter your info from how many minutes you use, to your location, what kind of user you are, long distance usage, text messaging usage etc… In the example it shows the person who put in all the info was given a profile summary and the Rate Plan Calculator was going to display the “Total offers being Calculated: 37512″… only to eventually display all the rate plans stacked on top of each other in a confusing manner. Something we simply do not need to our frustration. Check it out here