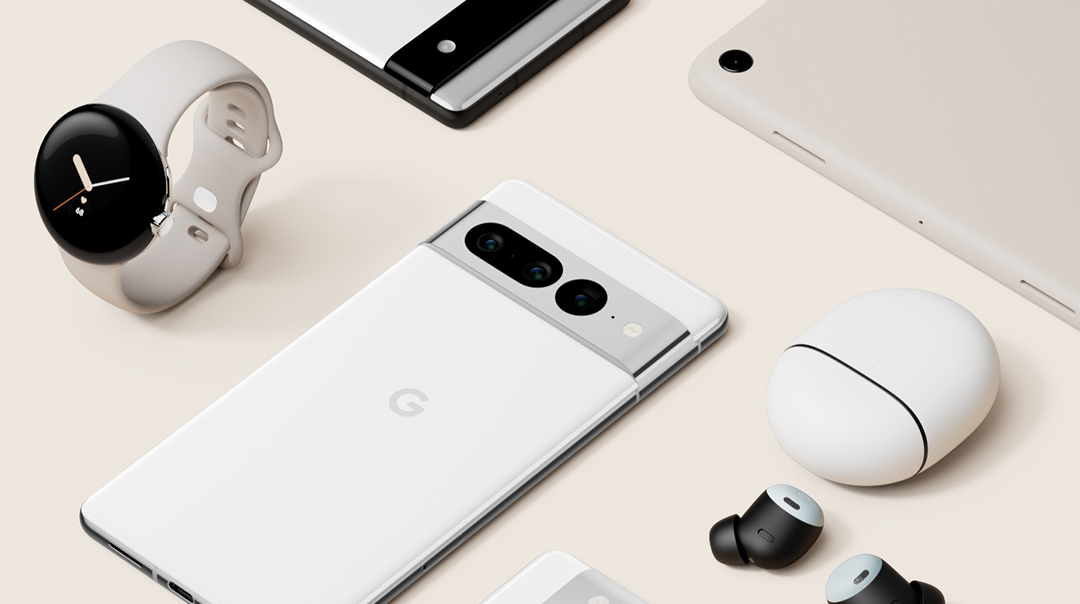 In order of most to least exciting, let’s get into it:

After years of waiting, Google has finally unveiled the Pixel Watch.

While we expected to see the watch, it’s pretty exciting to finally get more details about the wearable. First and foremost, this device won’t launch until later this fall alongside the Pixel 7 and 7 Pro. This means we should expect an October launch for the Pixel Watch.

The watch will run WearOS and features “deep integration” with Fitbit and its heart rate, sleep and fitness tracking tech. While Google didn’t reveal much about the wearable, it did mention that the watch will feature a voice assistant, wallet integration, and support for the Google Home app.

You can learn more about Google’s new wearable here.

While we expected to see the Pixel Watch, catching a glimpse of the Pixel 7 and 7 Pro was a surprise.

Did you catch that pop of color?#Pixel7 will come in:
⚫ Obsidian
⚪ Snow
🟡 Lemongrass

Google revealed the back of the Pixel 7 and 7 Pro devices. We don’t know much about these two smartphones, but they both will offer the next generation of the Google Tensor chip, Android 13 and more.

You can learn more about the Pixel 7 series here.

Google has unveiled its Pixel 6a, and while that might not be the most exciting announcement from the keynote, it’s been a full two years since we saw an a-series Pixel smartphone in Canada. The phone will retail at $599 and will be available for pre-order on July 21st ahead of a July 28th release.

The Pixel 6a features a 6.1-inch OLED display with a centred hole-punch selfie camera and 60Hz refresh rate, and two 12-megapixel sensors (wide and ultra-wide angle) on the Pixel 6-like visor. Additionally, it sports 6GB of RAM, 128GB of storage, an 8-megapixel shooter on the front and a 4,410mAh battery.

Check out more details about the Pixel 6a here.

We expected to see the Pixel 6a at Google I/O 2022, but the Pixel Buds Pro are more of a surprise. While the earbuds leaked a month ago, we assumed it would be at least a few more months before we learned more about Google’s high-end wireless earbuds.

The Pixel Buds Pro will cost $259 in Canada. It’s currently only possible to subscribe for updates on the Buds Pro on Google’s Canadian website. We haven’t verified Canadian availability, but in the U.S., the Pixel buds will launch alongside the Pixel 6a on July 21st.

For more on the Pixel Buds Pro, click here.

Google is working on tablets again. This tablet won’t launch until 2023, but we know it will run on the Google Tensor chip.

Here’s a sneak peek at our upcoming Pixel tablet 👀

In an image that flashed on-screen during I/O, the front of the tablet looked like the display of a Nest Hub. The front-facing camera is also set to be on top when you hold the tablet in landscape, which should be great when video-calling loved ones.

It also seems like the Pixel Tablet is launching in white and green colour variants, but these are probably subject to change.

You can learn more about the Pixel Tablet here.