Lego Star Wars: The Skywalker Saga ushers in the next generation of Lego games 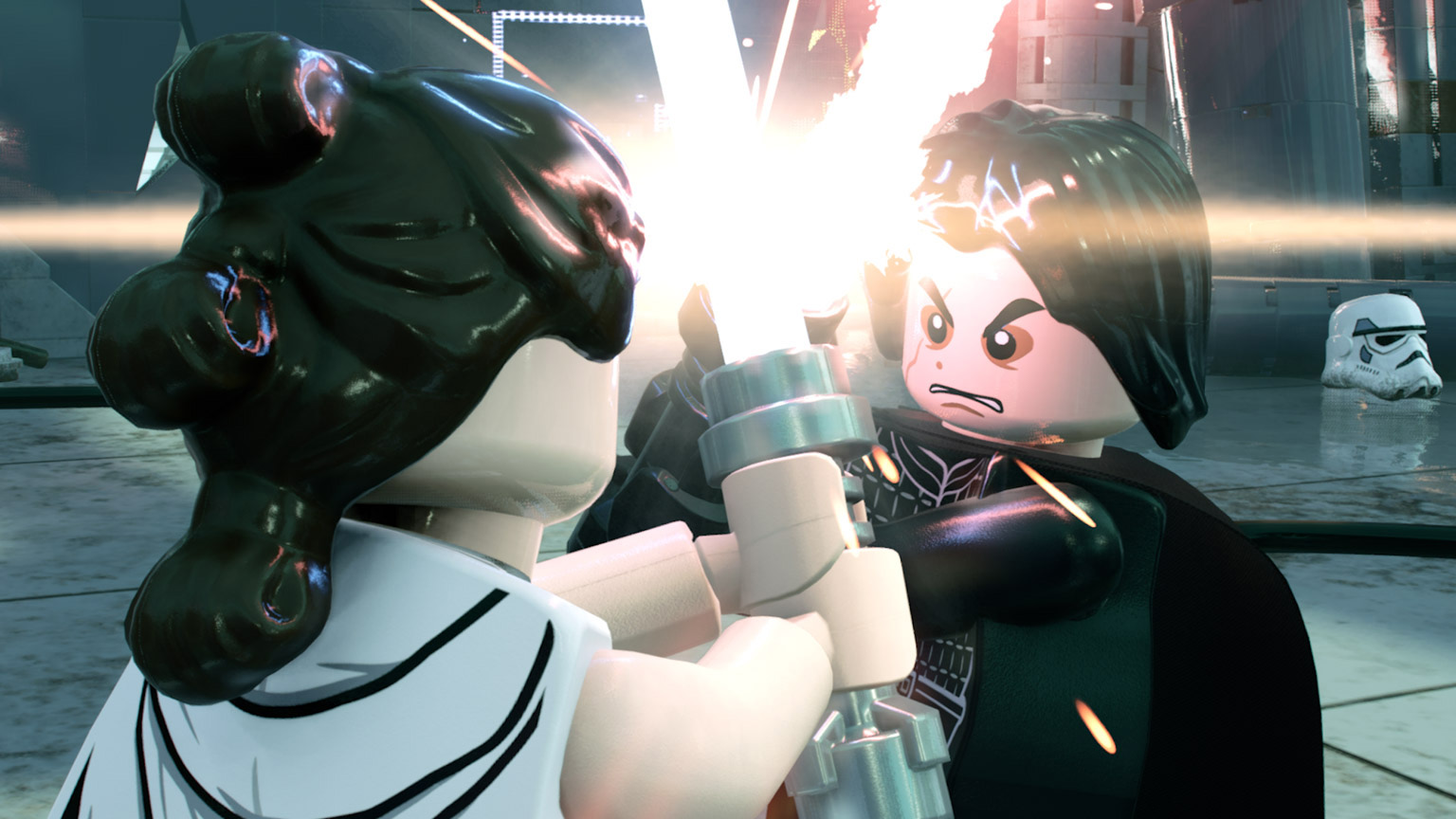 Lego Star Wars: The Skywalker Saga is kind of like your mom’s meatloaf.

Sure, there are better, more intricately-crafted meals out there, but that doesn’t make Mom’s cooking any less delicious.

The journey of The Skywalker Saga has been a long one. After being first announced nearly three years ago, developer TT Games has been hard at work on their next foray into the galaxy far, far away. Collecting all nine mainline Star Wars films into one brick-based package, this game looks to usher in a new era for the franchise, after more than a decade and a half of Lego titles.

The Skywalker Saga is inarguably the biggest Lego game ever made. While past titles have sported many levels and hundreds of characters, this does all that while including open, explorable worlds, a reinvented combat system, and a new over-the-shoulder camera angle. Even though this was announced before the next generation of consoles got started, this very much feels like a next-gen Lego Star Wars.

But it’s also very much a game of give and take. While it does innovate in almost every aspect, nearly everything comes with a caveat. However, none of these flaws are big enough to detract from just how good this whole package is.

For gamers who have been with the Lego Star Wars franchise since 2006, the gameplay of The Skywalker Saga is the first big change they will notice. There are some familiar trappings like collecting Mini Kits and grabbing as many studs as possible, but pretty well everything else is different.

Gone is the fixed camera and fairly basic platformer gameplay, and in comes a new more modern approach to playing the game. The camera now follows your character over their shoulder, as it would in God of War or Uncharted. This change makes the game instantly feel like an upgrade from past Lego titles. Not to say the other games in the franchise have felt lesser, but this new camera does elevate the experience quite a bit.

Instead of going through fairly linear missions making up each movie of the franchise, these linear sections are now broken up by larger open-world hubs. While at first, I did question why they were there, after a few hours these explorable zones had me hooked. 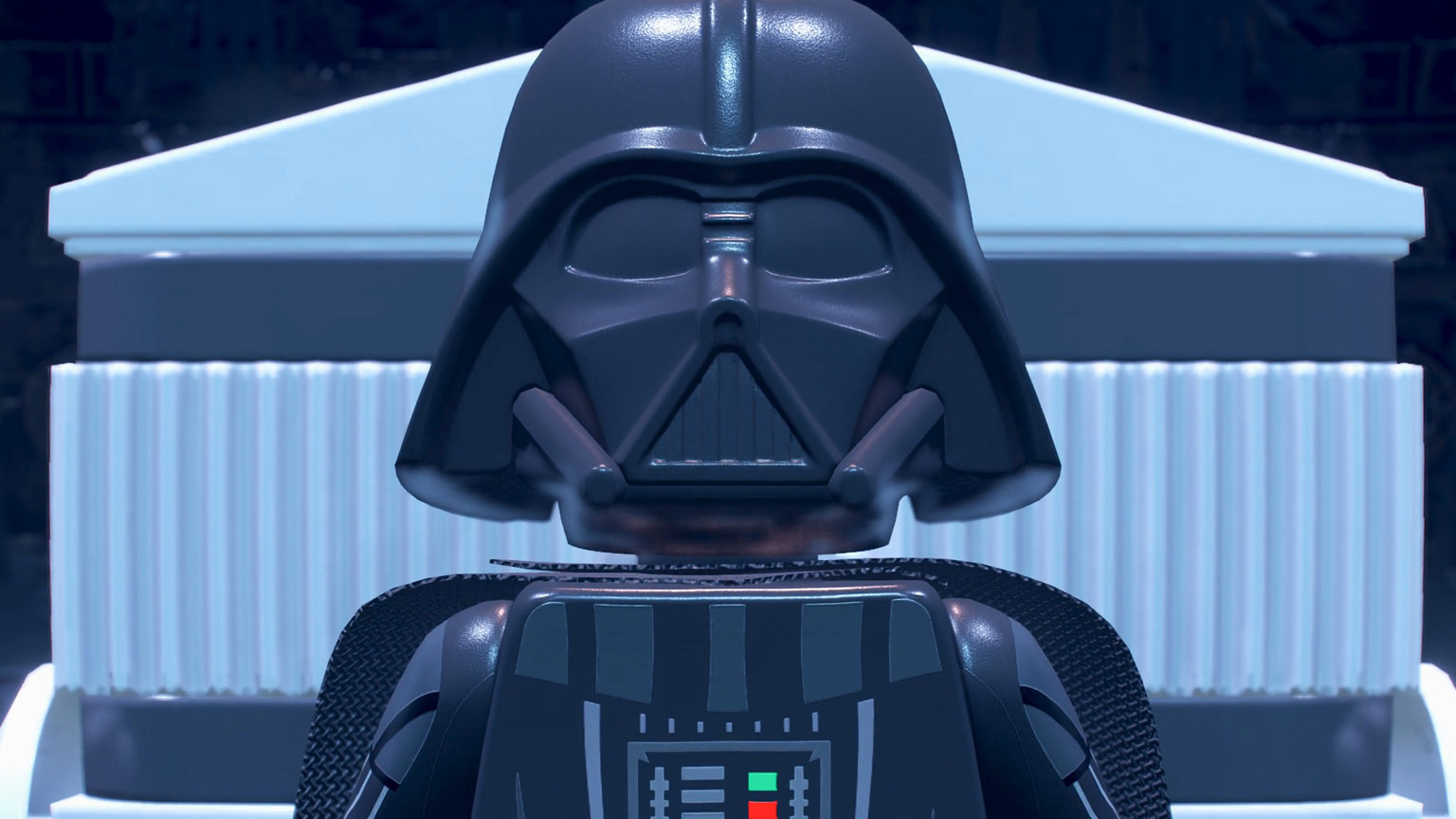 While moving through each of the movie’s stories it became so easy to get lost in these open sections searching for collectibles. Sure, the upgrades these hidden relics grant you are, for the most part, fairly inconsequential; however, that did not stop me from wanting to collect every single one of them.

These small carrot-on-the-stick collectibles all come with their own set of challenges, offering some of the most fun creative thinking moments of the game. The solutions never hit the level of creativity of something like Super Mario Odyssey, but they are simple, yet fun diversions that had me straying off the beaten path more often than not.

When going through the linear missions, however, it does feel very much like a Lego game. You will build, traverse, and solve minor puzzles as you venture across the galaxy, and for the most part, it is a good time. It is a simple formula, but it works.

Some of the shake-ups found in these story missions are the best moments The Skywalker Saga has to offer, though. Taking a break from swinging a lightsaber to pilot a speeder on the Forest Moon of Endor has never felt better. Or how about the sudden surprise of puzzle-solving from two different perspectives in the droid factories of Geonosis? These little mix-ups keep the experience fresh in a title where you are doing a lot of the same thing over and over. 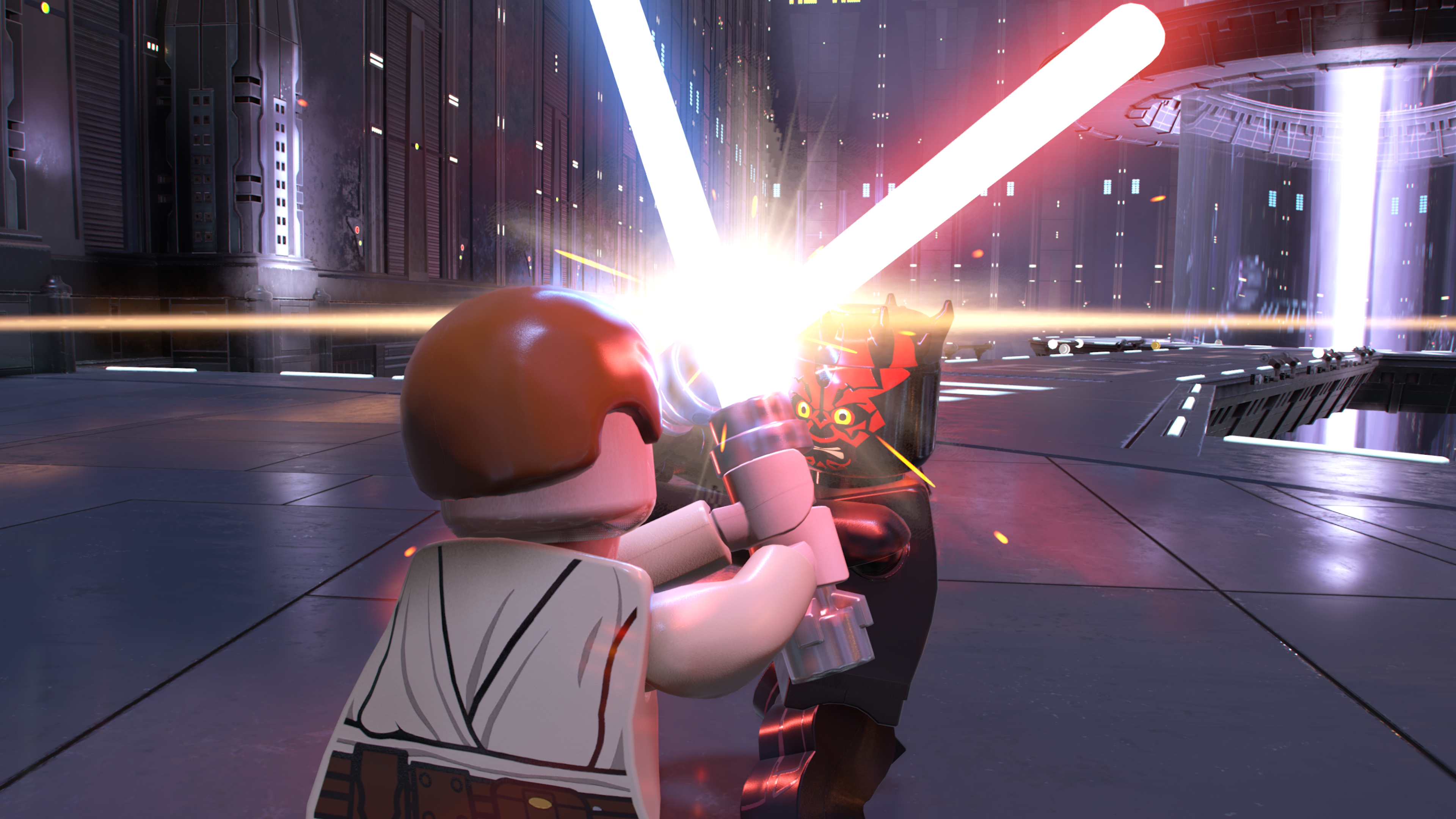 Like many of the systems in The Skywalker Saga, combat has been entirely reworked as well. The new combat system takes notes from the past games in the franchise but reinterprets them into something wholly new.

The team at TT Games are wearing their influences upon their sleeves most evidently here. There is a combo system one would find in a Devil May Cry game, and boss battles akin to those in the Dark Souls titles.

However, gamers looking to find something as complex as either of those games will not find that here. This is almost like a low-calorie diet version of either of those. Yes, there is a combo system in place, but it is quite simple and fairly easy to master. And yes, there is dodging, parrying, and a giant health bar in boss encounters, but most can easily be beaten by mashing the attack button.

Something that is a welcome addition is the third-person shooting. Similar to games like Gear of War, you can take up arms behind cover and pick off enemies that way. Again, this is nothing as complex or as pinpoint accurate as other games, but it does feel good to shoot a blaster.

The combat here may look and feel different than the Lego games of yore, but ultimately, The Skywalker Saga never makes it feel quite like the revolution that many had thought it could be before release.

Co-op is back as well! And while it can be fun to play through these epics with a friend, adding another play does take the already thin screen real estate and double the issues. This of course wouldn’t be a pressure point if you could jump in with a friend online; however, at launch co-op can only be done locally. 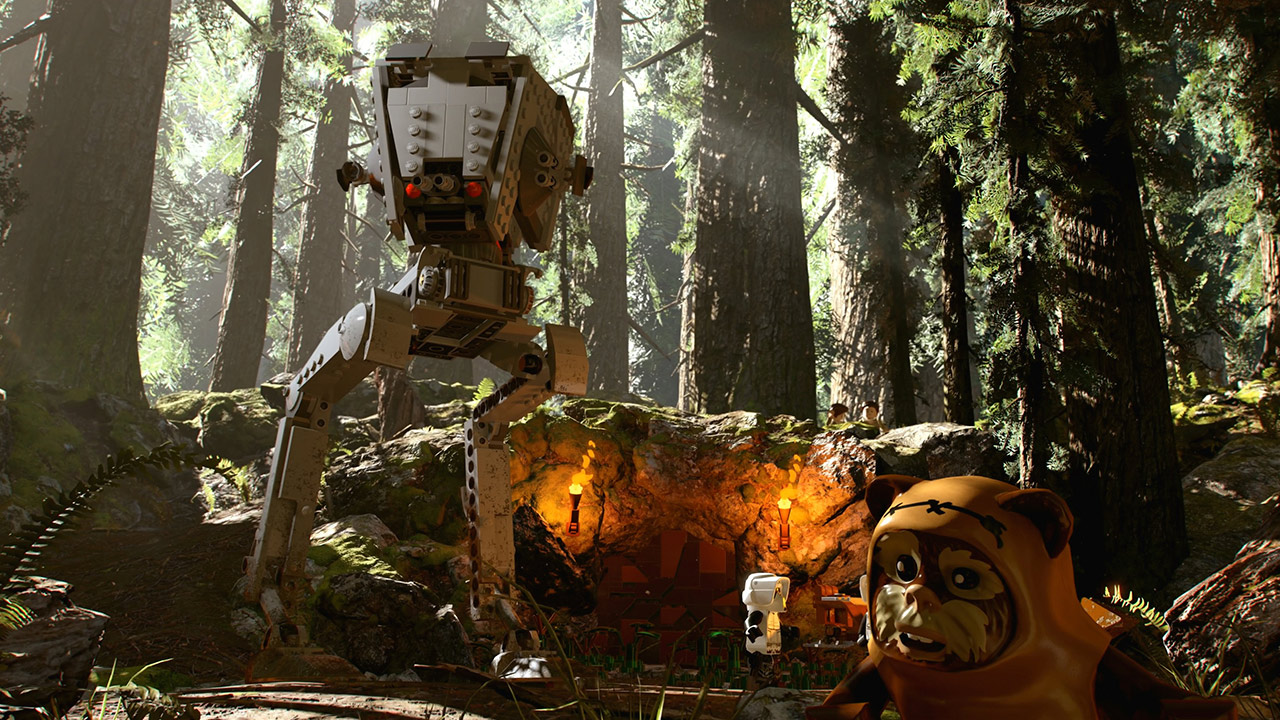 From a technical standpoint, The Skywalker Saga is, far and away, the best-looking Lego game ever made. The character models give off this authentic Lego sheen, making them look like they have come to life on your living room floor.

The way that light bounces off of these plastic characters is truly stunning. And the attention to detail on these figures is something to behold. You can see the seams along the side of minifig headpieces, or the dirt or snow collecting in their joints as you traverse various worlds. It’s these small touches that really make this feel like seeing your favourite Lego sets come to life.

The playable characters and set decorations are the highlights there, however, the game’s many environments can be a little hit or miss. While locales like Ahch-To or Bespin look great with pops of color and excellent lighting effects, others disappoint.

Planets like Tatooine, Crait, and Geonosis can look messy at times, with these mostly one-color environments becoming a bit of a brown, orange, or white mess when looking at them closely. This is especially the case when focusing on objects in the distance. With the lack of general palette variety on these planets, backgrounds can look splotchy and can take away from the immersive Star Wars experience found in other locations. 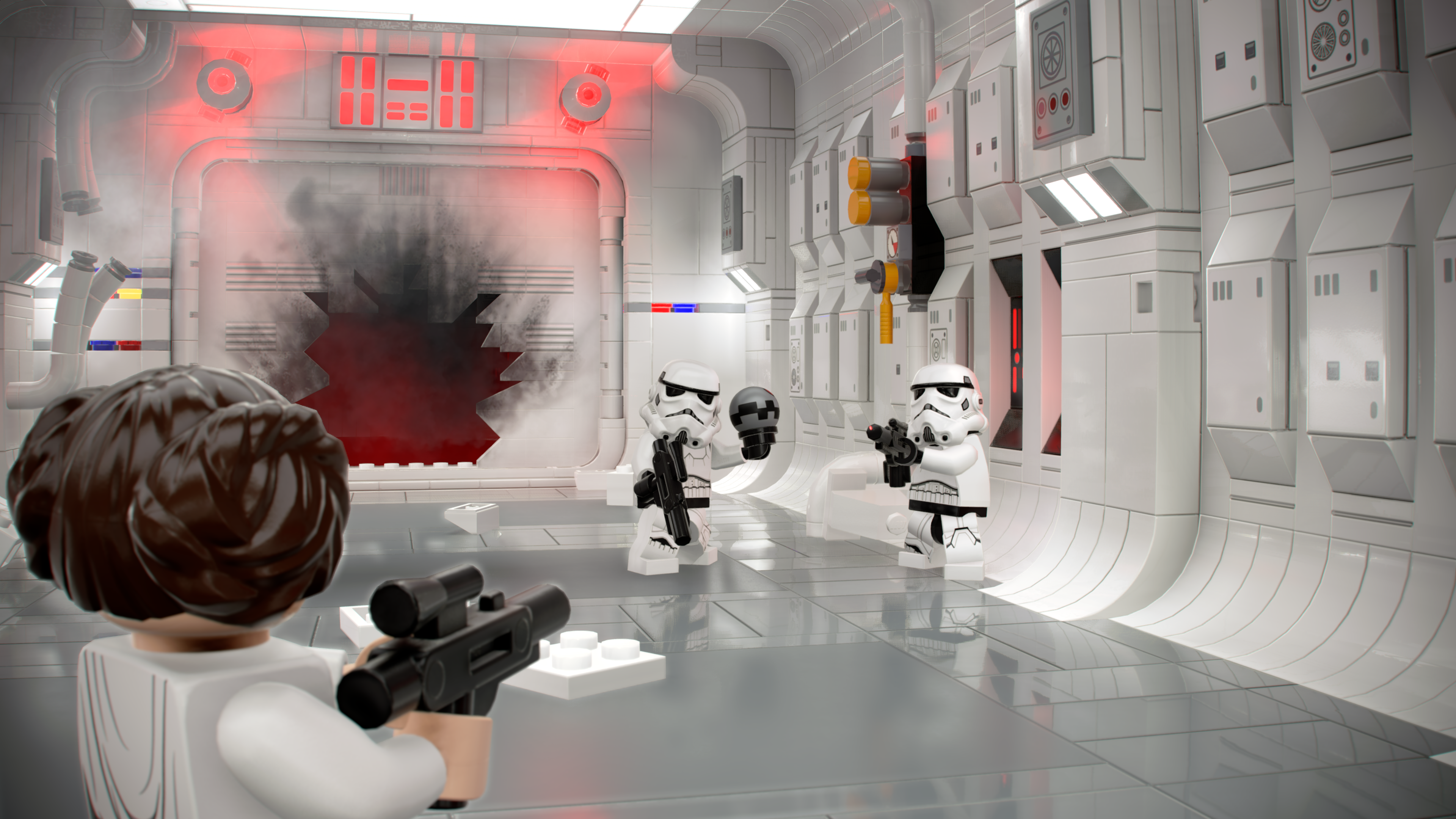 The sound design of The Skywalker Saga is a dream. The soundtrack is, of course, masterful, as it features nearly all of the series’ John Williams-composed work. Despite this being a Lego game, I found myself welling up at certain moments if only because of the masterful score (damn you, “Binary Sunset”).

The rest of the soundscape created here is impressive. Each locale has its own sonic flare, and the Lego of it all adds these nice familiar clicks and snaps to everything as the world is disassembled and rebuilt around you.

A couple of Lego Star Wars: The Skywalker Saga’s biggest misses come in its presentation. The two most notable of these are its voice acting and the HUD.

The voice acting here can be a bit of a mess. TT Games utilizes both actual dialogue from the Star Wars films as well as added lines read by voice actors. And while in practice it can be cool to hear Daisy Ridley or Mark Hamill every once in a while, it is a little jarring to hear these characters jump back and forth between the original actors and hired talent.

Most of the voice acting team do a serviceable job, usually chiming in with that signature Lego game humor, but there are some that are downright bad. Not to take anything away from the voice actors who lent their talent to The Skywalker Saga, but hearing Adam Driver and the actor brought in to play Kylo Ren back to back makes it sound like this character is two completely different people.

Also on the presentation front is the busy HUD. The act of playing this game can be messy at moments, with your health, a combo metre, stud counter, quick-time events, mission log, a map, and a boss’ life bar all on-screen at once.

This problem increases exponentially after unlocking upgrades to reveal the game’s many collectibles, creating little light blue halos all over the screen at any given time. These HUD elements can, for the most part, be turned on and off, but it is annoying that you have to go digging in the menus to make that happen. 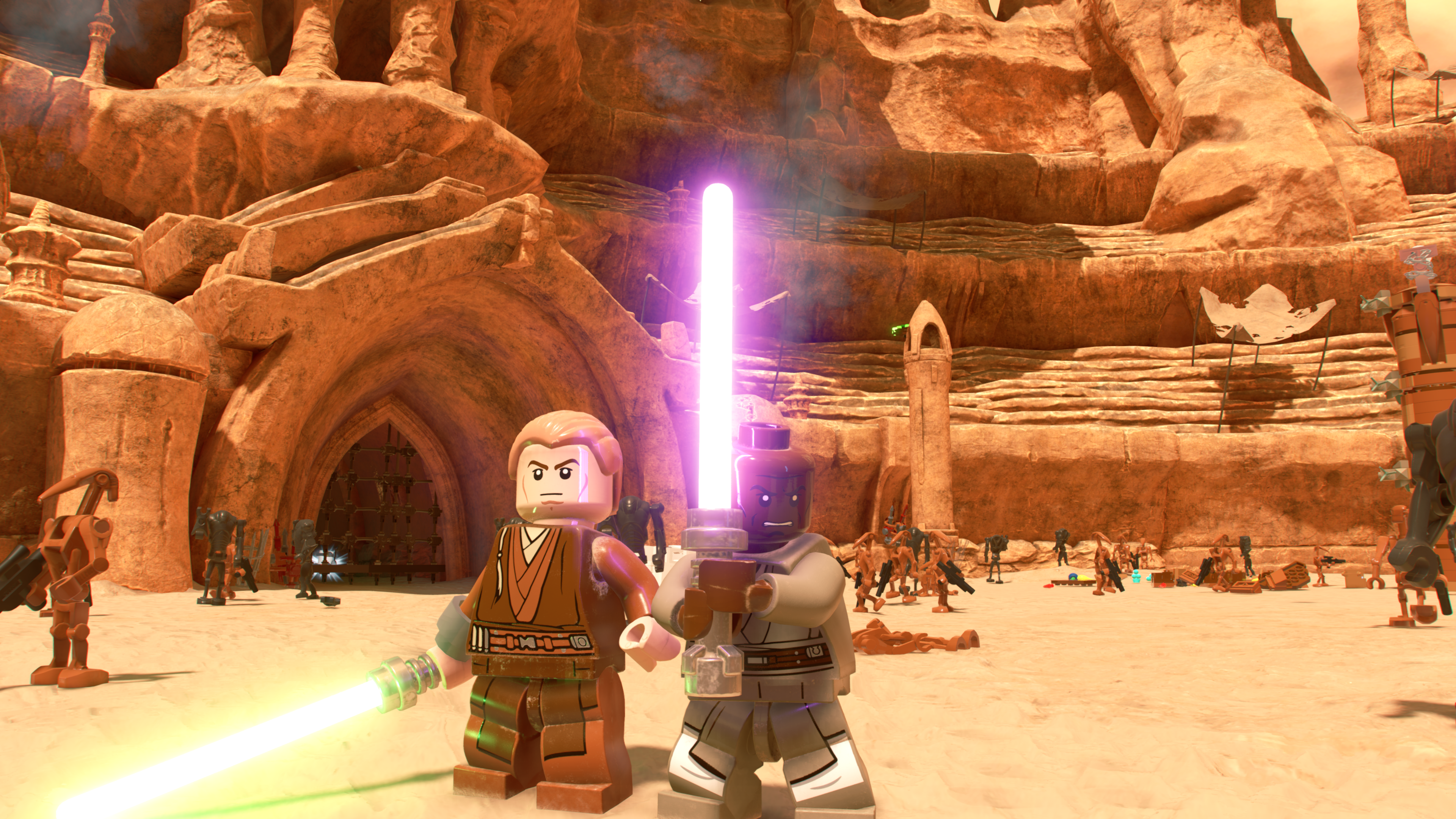 In short, Lego Star Wars: The Skywalker Saga may not be the qualitatively best Star Wars game ever made, but it just might be my favorite. This really does feel like the beginning of the next generation for the franchise, and an evolution of what has come before.

Yes, it does have its missteps with messy environments, simple combat, and lackluster voice acting. But it’s the “just one more puzzle” nature of the open world, the stunning character models, and getting to relive some of my favorite moments in film history that kept me playing.

This is a love letter to Star Wars in nearly every way. While it stumbles in a few places, it puts fun at the forefront of the experience, and is that not what gaming is all about?